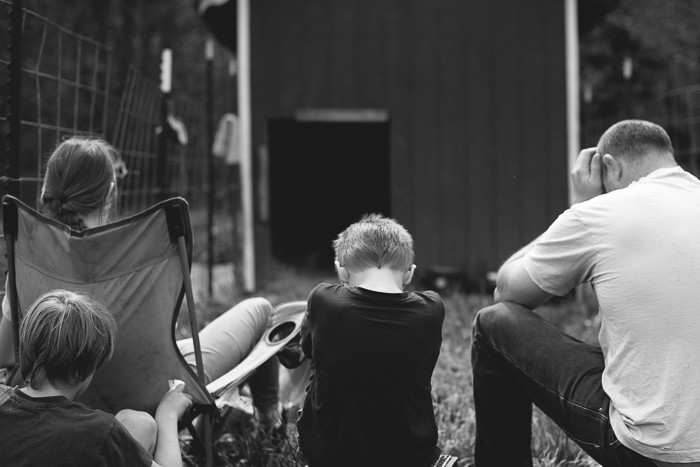 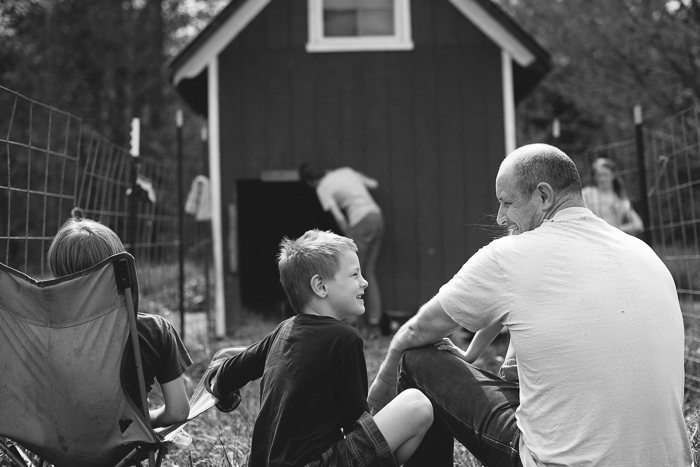 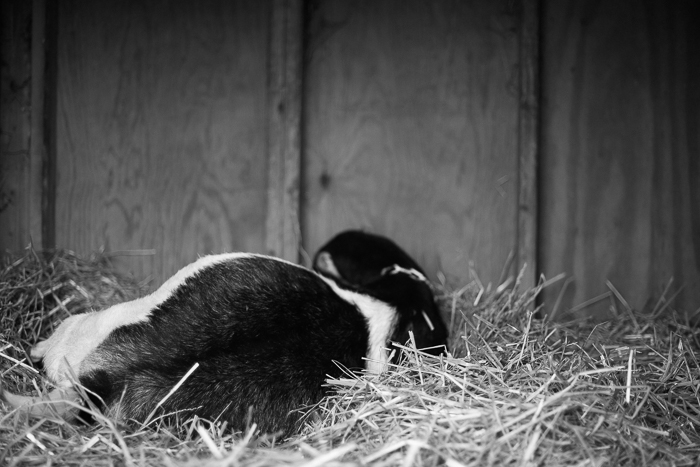 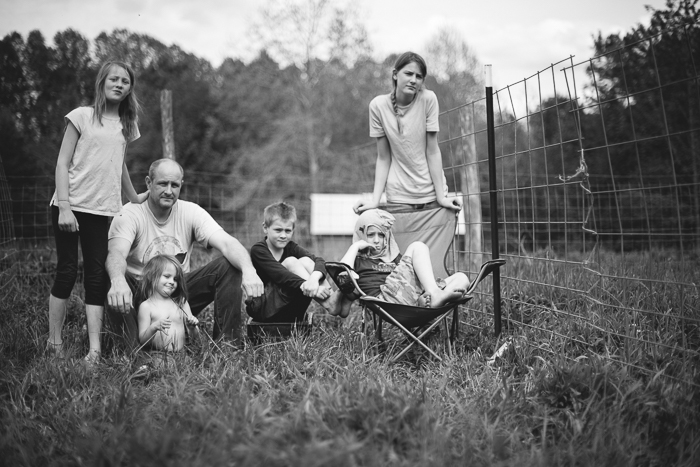 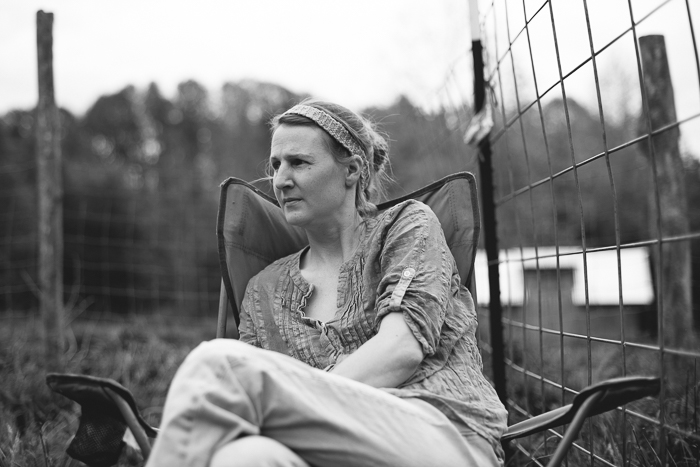 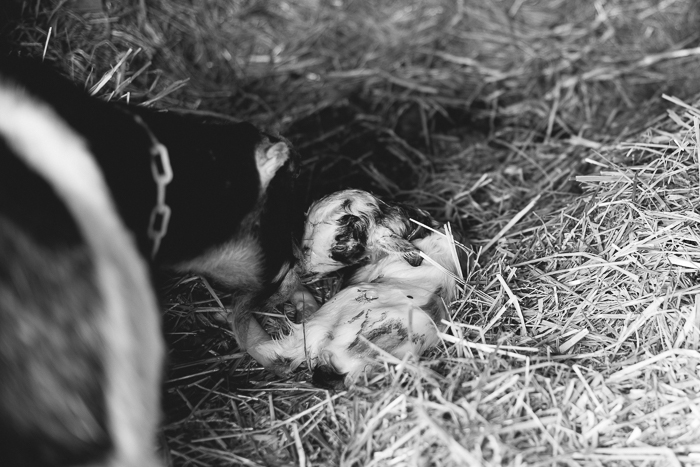 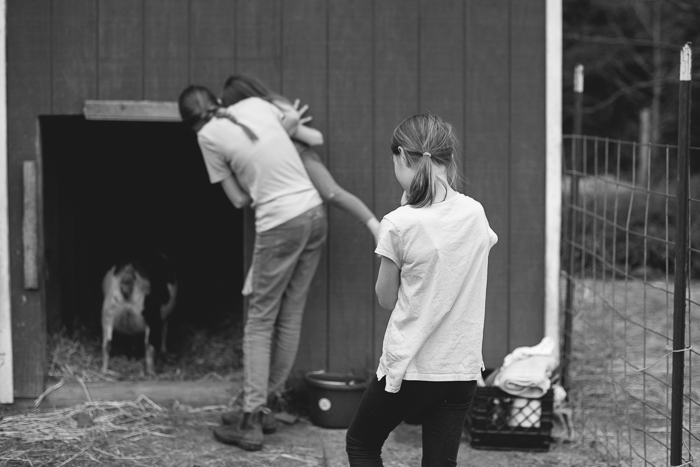 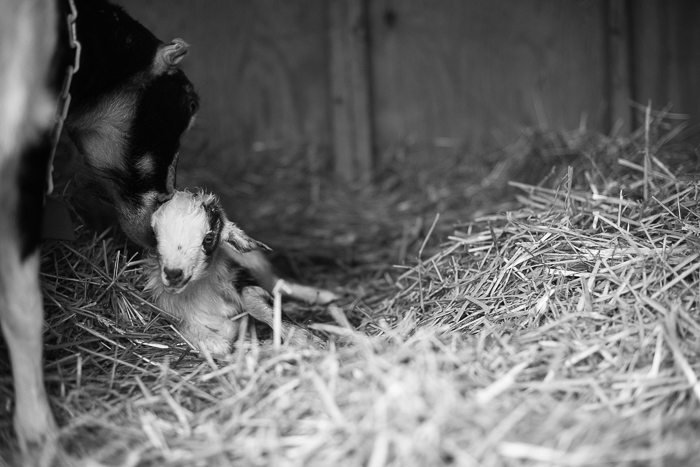 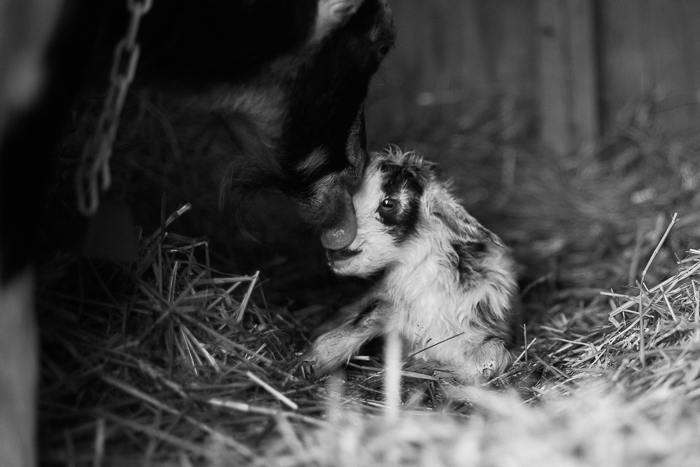 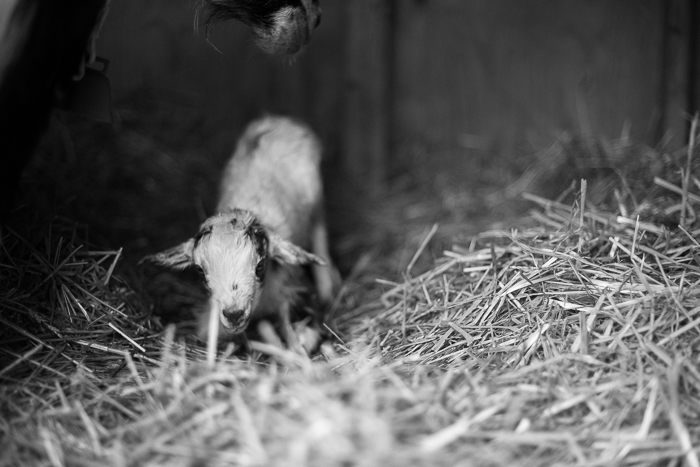 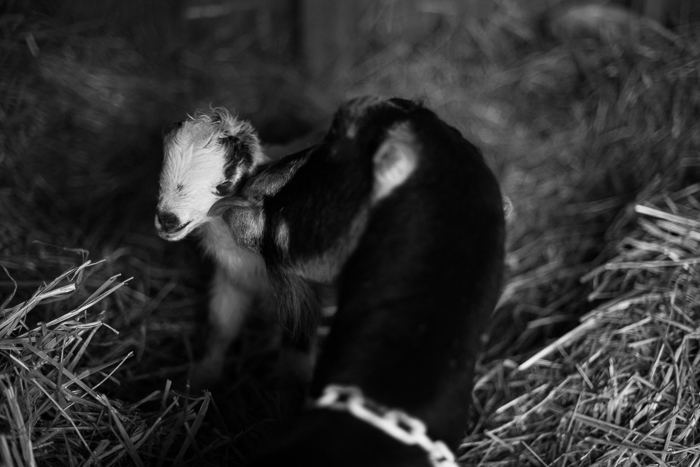 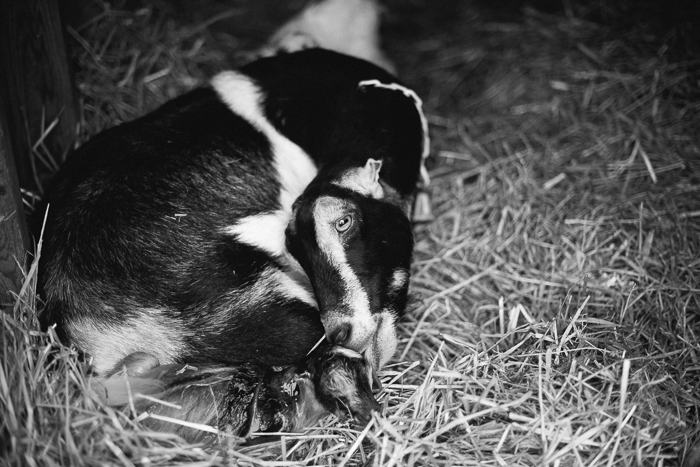 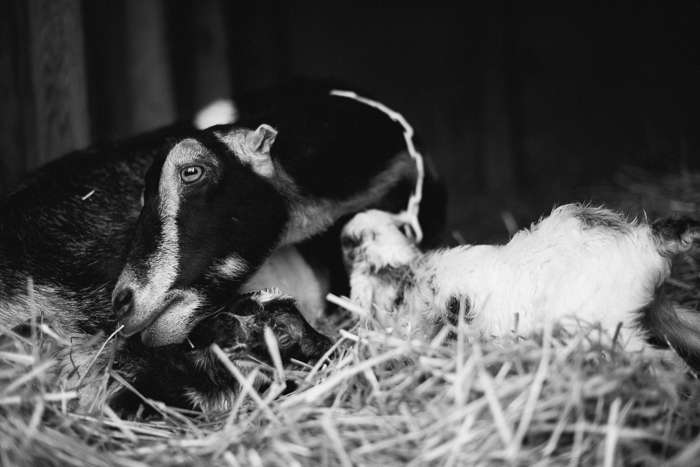 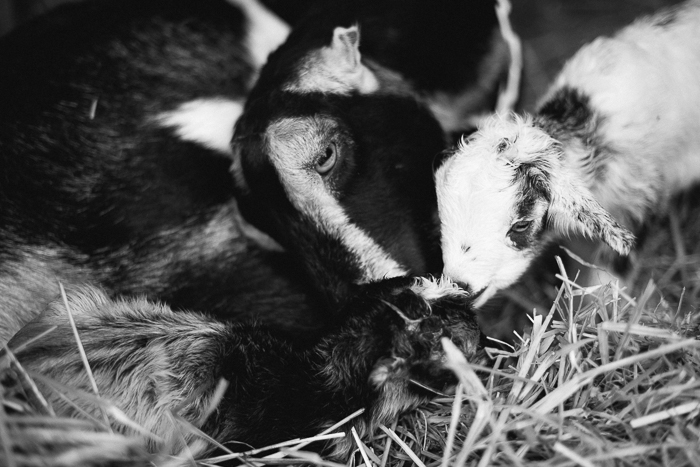 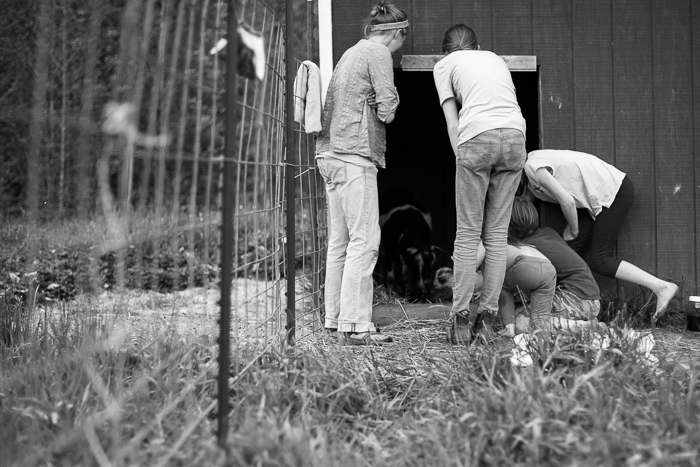 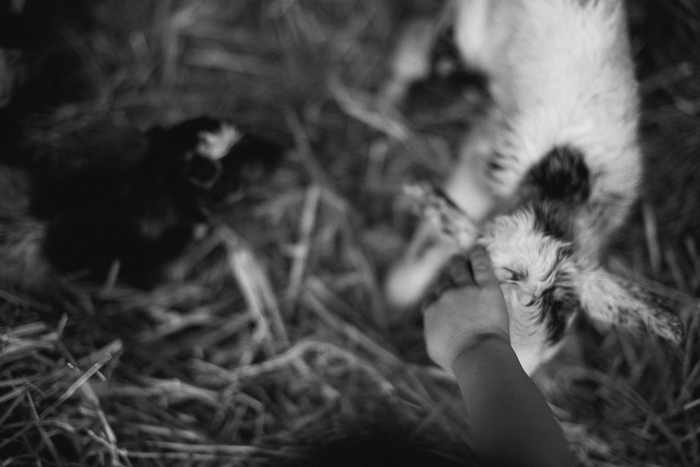 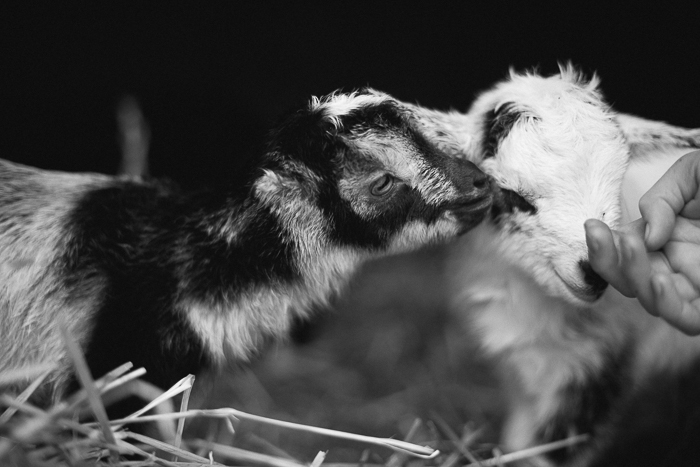 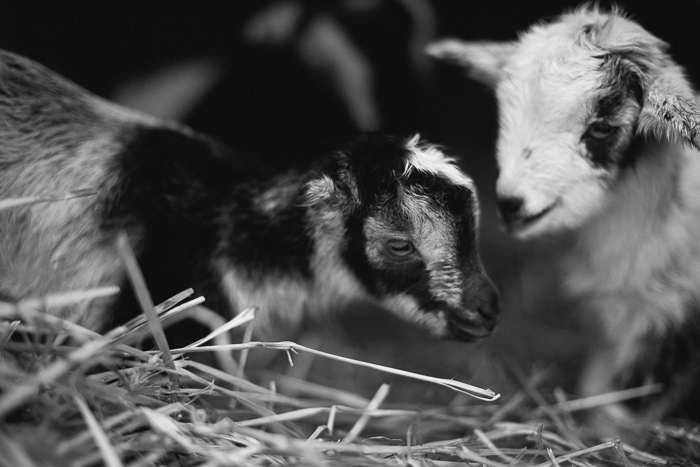 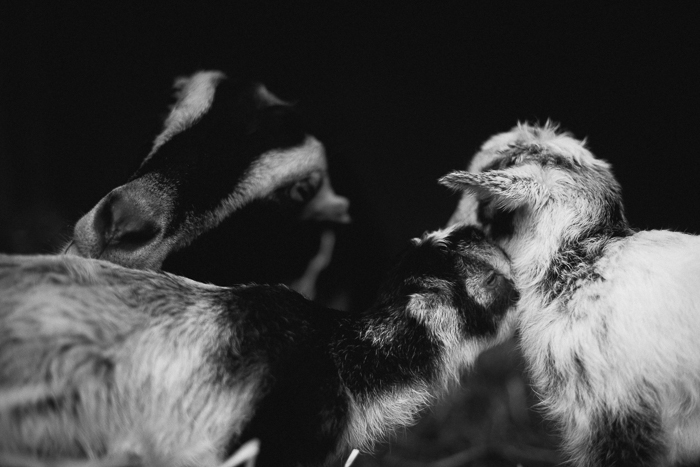 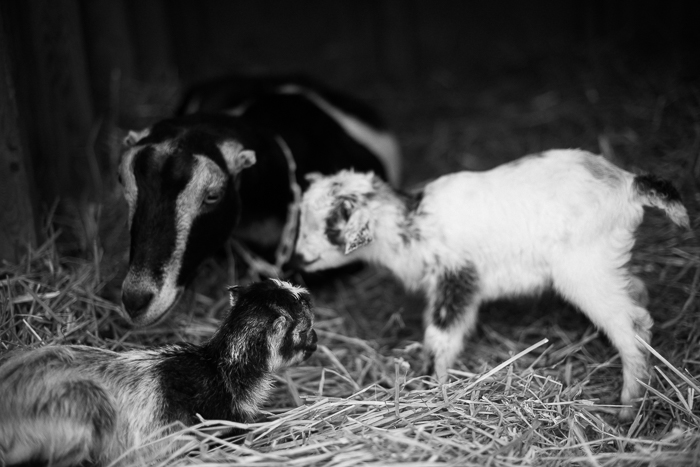 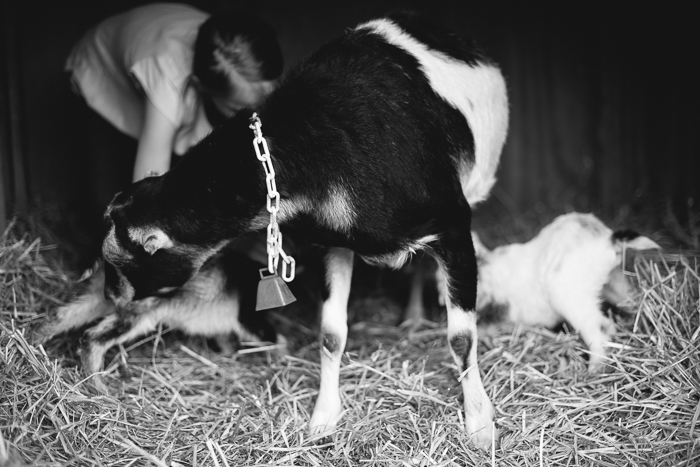 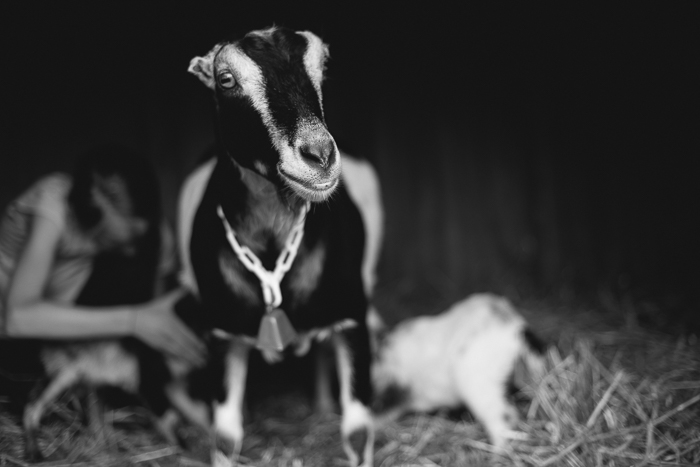 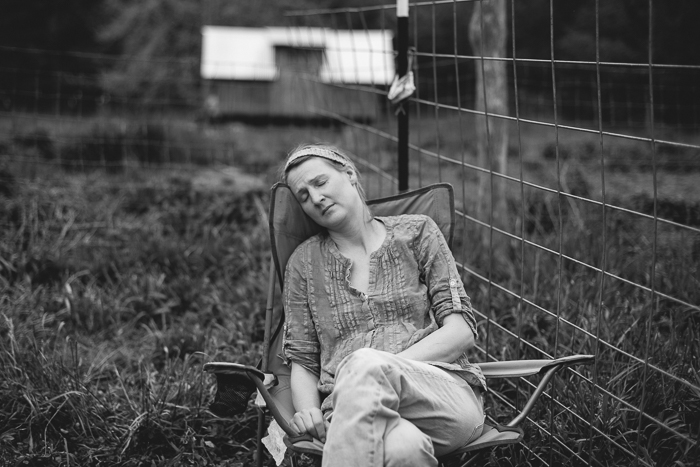 According to Jonny, Tilly’s labor and the birth of her kids was more stressful than watching me give birth. I’m not convinced he would say that had we had a baby recently, but it was really hard. I also think that everything feels a little more stressful right now than it usually would. Were it not for the current situation, we would have likely had some experienced friends here for support. Being alone is hard sometimes.

Tilly started showing signs of labor Wednesday morning. I texted our farm vet just to give her a heads up in case we ended up needing her. Larkspur set up a chair and didn’t leave Tilly’s side. Tilly is an ornery goat, and really only likes Lark and Jonny. She did seem to want Larkspur to stay with her. By mid-afternoon, she was acting like she was really uncomfortable. Jonny started timing contractions, his first instinct when a lady is in labor. They seemed to be 90 seconds to 2 minutes apart. With each one, Tilly would roll on the ground and yell. An experienced friend of mine told me that some goats are more dramatic during labor than others. Tilly falls in that category for sure. This went on for what seemed like a really long time, and I started to worry that something might be wrong. She was acting very distressed with nothing to show for it. Tilly is four years old, on the old side to be having kids for the first time, so that was always a concern. I texted the vet and she agreed that Tilly might need some help. I was so relieved when she said she would be at our house soon.

While we waited, Tilly’s contractions intensified and she seemed to be really pushing with each one. The vet arrived and checked her and told me that she was barely dilated. I couldn’t believe it! She was concerned that a c-section might be necessary. That was not what I wanted to hear. For the next half hour, we watched and waited. Tilly stopped acting dramatic but continued to have sporadic contractions. I felt silly and promised the vet that she really had been acting very distressed before she arrived. It felt like a case of calling the midwife too early in labor. After the half hour, the vet checked Tilly again.  She had dilated significantly and she could now feel two hooves, so baby was in the right position and things were progressing! She prepared to leave telling us to keep a close eye on Tilly. She thought we should have kids in the next half hour.

The first kid was slow to come. I paced and tried to stay calm. We all tried to give Tilly space while keeping an eye on her progress. There was great excitement when those first two little white hooves became visible, followed by great worry when the baby wasn’t born quickly after their appearance. I sat texting the poor vet a play by play and she gave me time frames so that I knew when there was reason for concern. She assured me she was close by if we needed her to come back. Hooves and a little pink nose were visible for almost twenty minutes before the kid was born. Maybe that is normal, but it felt scary! To everyone’s relief and great joy, the first kid, a buckling, was finally born a little after 4 p.m. A very petite doeling was born quickly and easily about twenty minutes later. Tilly, rejected by her own mother and bottle raised by us from day one, proved to be a wonderful mother to her own kids from the start. We stayed back and didn’t interfere while she cleaned and cared for them.

I think that if we do this again in the future it will be easier. We will know better what to expect and what is normal. But this experience was really intense. I was completely wiped out by it. Jonny patted my back while I hung over the fence fighting tears when it was over and all was well. I was so intensely thankful for a happy ending and I still am.

Tilly and the babies are both doing well and they are bringing us so much happiness right now. There is nothing like a baby goat to make you smile. They are the most delightful creatures. Poor Tilly isn’t thrilled with the steady stream of visitors. Though according to Larkspur, when she goes out to visit, Tilly heads in the barn to lie down and take a break, knowing that her babies are safe in her care.

I prayed that Tilly would have a smooth labor and birth without needing intervention and she did. (I am the only one who needed that vet visit!) I prayed that she would bond with her babies and that we wouldn’t need to bottle raise them. And it was my wish that she would have a buckling and a doeling. If God grants me these little things, it’s a wonder that I still worry so much about the bigger things.

p.s. I felt that black and white photos told this story best, but there’s a color photo of the babies on Instagram if you want to see them, and I’ll share more color photos here soon!