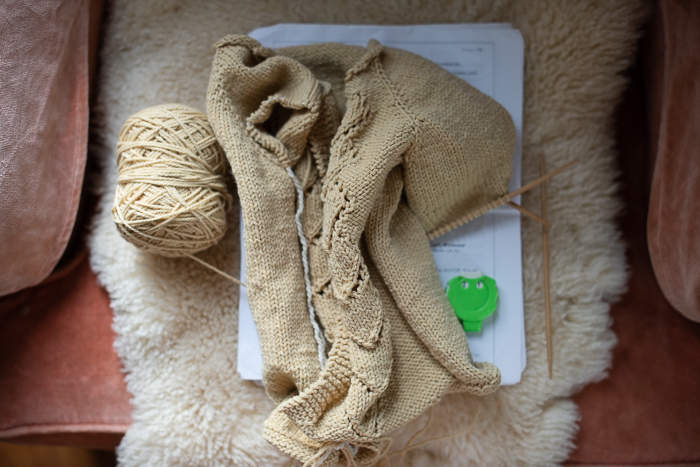 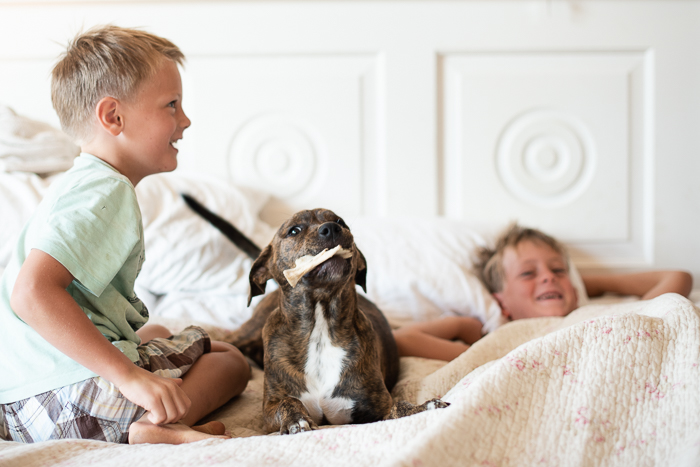 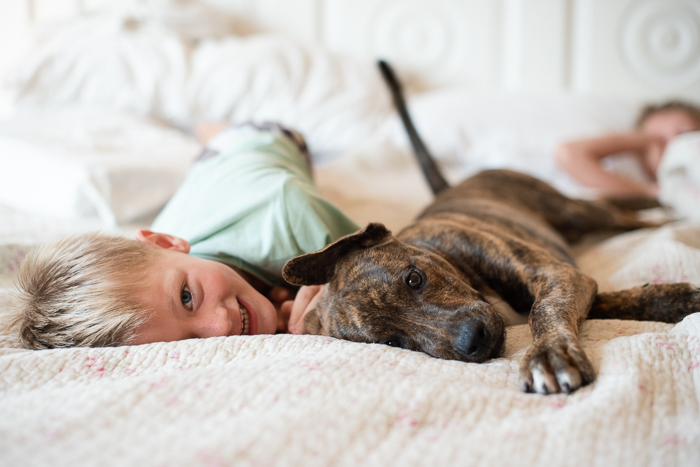 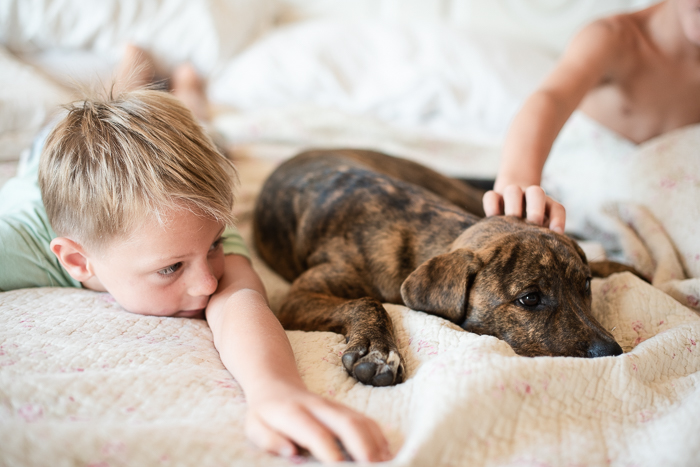 Is there such a thing as fall cleaning? Getting ready for a new school year typically motivates me to clean and organize like crazy, and this year more so than ever. My big problem is that while I am working in one area of the house, small children are destroying another area unless I keep them parked in front of a computer watching shows, which I’d rather not do all the time. So they end up in my bed with dirty feet and a stinky puppy (I’m washing bedding multiple times per week), outside working on treehouses and ending up needing stitches (Silas), or in the basement finding the toys that I hid because I was tired of cleaning them up. I keep telling myself that it’s okay because as long as I see this through, I will end up on top of things with a cleaner house than before. (I’m not sure I believe myself.) I got Jonny started on cleaning out his workshop and it’s up to him now to finish that project, the biggest of them all. When we moved here from our other house, he moved fifteen years of junk from his previous shop without going through any of it. So now we are doing what should have done years ago. Since moving here more has been acquired, including two square grand pianos that I guess he and Seth thought they would somehow refurbish. Thankfully, we found someone else who wants to refurbish them both and they will be leaving soon along with a trailer full of broken chairs that will never be fixed and other long forgotten projects. I’m working on the basement storage room (again. I’ve got to ban the kids from that area and enforce it) and cleaning out all the cabinets and shelves where I store homeschooling books and other kid related activities. Last night I cleaned my room, and my bedside desk is tidy again. Tomorrow I’ve got to return to the basement. I hate it down there but must persevere! 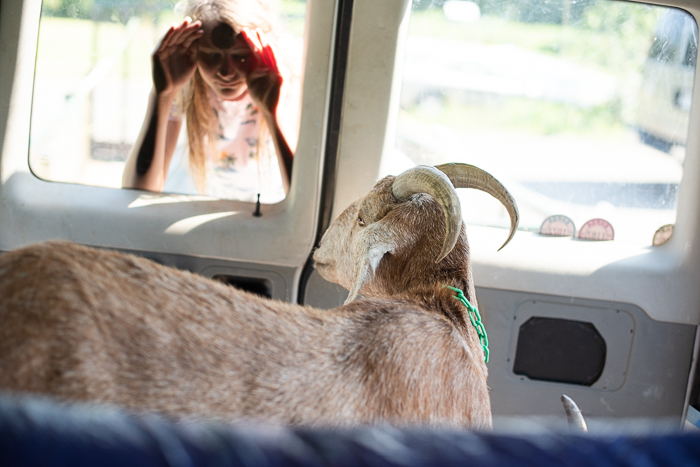 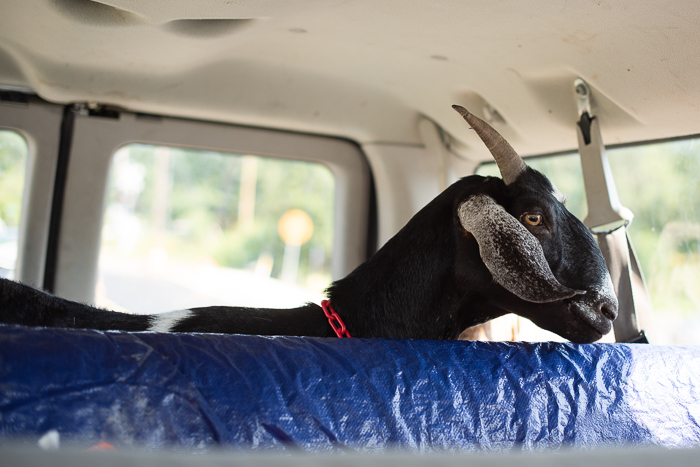 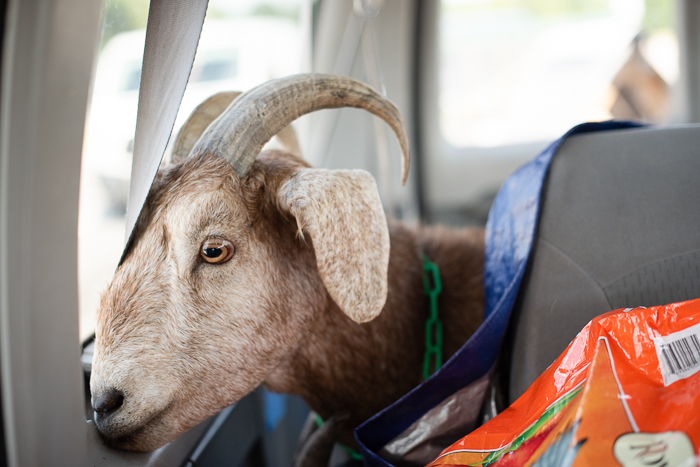 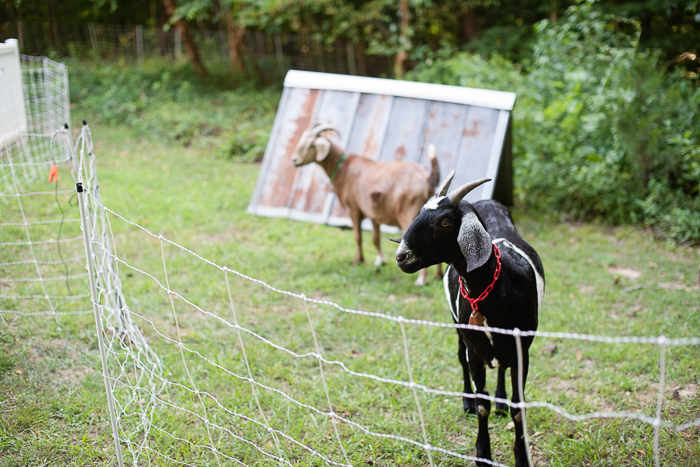 In addition to organizing and decluttering we downsized by two goats a couple of weeks ago. I’ve been thinking for awhile that we needed to rehome Robin Hood and Ivanhoe. If you’ve been reading here for a long time, you know that we bottle raised both of them and have had them for years, so it wasn’t an easy decision to make. We took them to live on the property of a friend of ours who has been considering goats for years to help with brush clearing. Not wanting them riding in the back of our open trailer, I convinced Jonny that it would be fine if they rode in the back of our big van. It was mostly fine until Robin decided he wanted to come up front. Not the same as having a dog decide it wants to ride in your lap! Thankfully, I was able to intervene before he made it!
I was sad to say goodbye, but they are doing great there and I have no regrets. My friend sends me periodic updates and they aren’t too far down the road if I want to say hello. 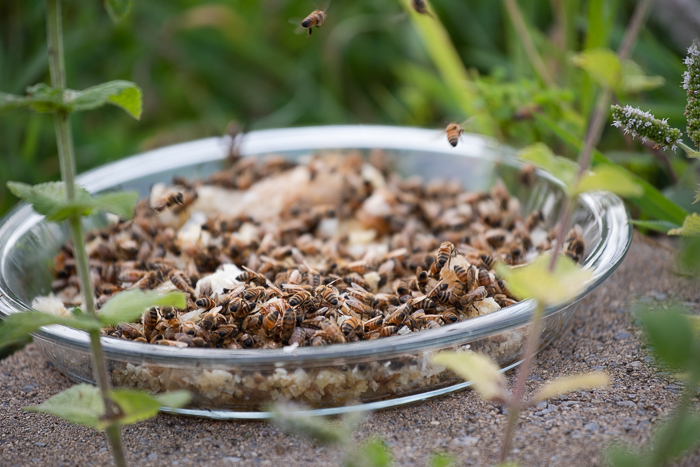 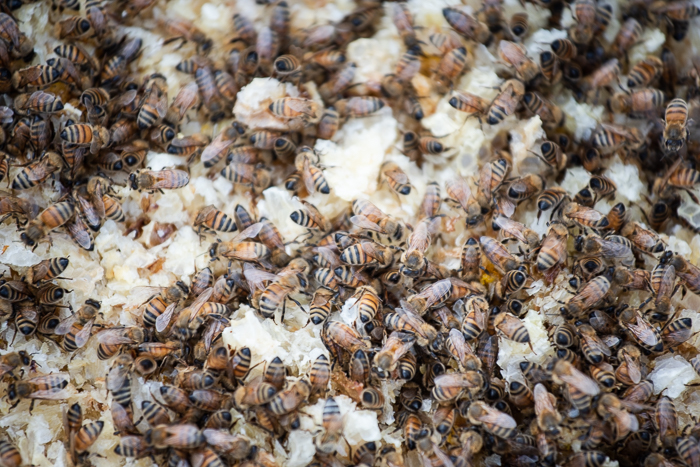 I mentioned that we harvested some honey, and wanted to show you what I did with the beeswax. First we had the bees clean all the honey off so none was wasted. That took a couple of days. 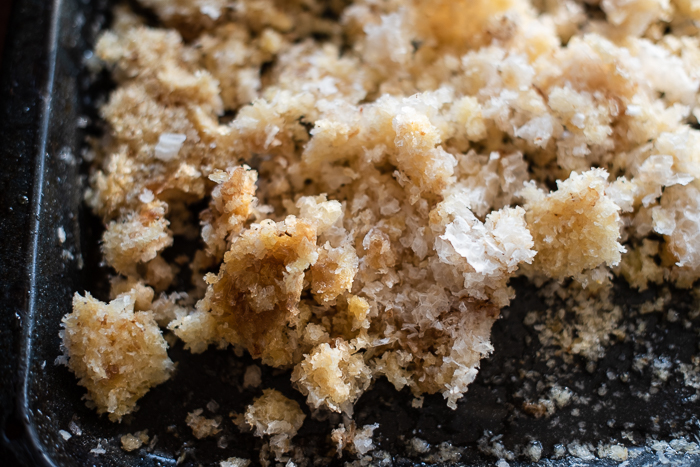 The wax looked pretty chewed up when they were finished with it. 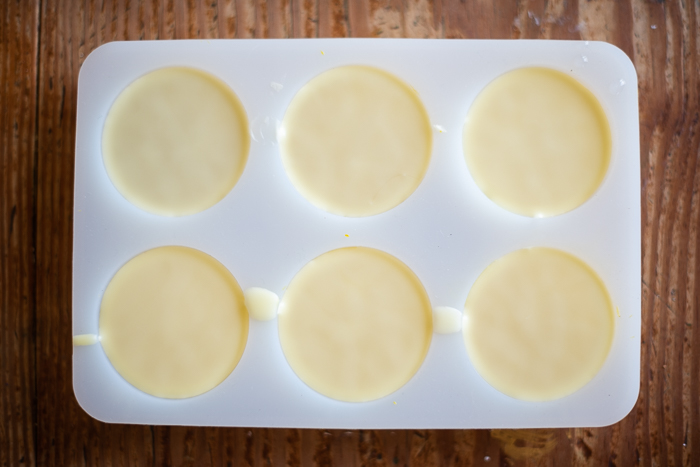 My first step after the bees finish is to process and filter the wax and pour it into molds. That way I can easily store it or remelt it down to make things. This wax was new this year and so light in color! 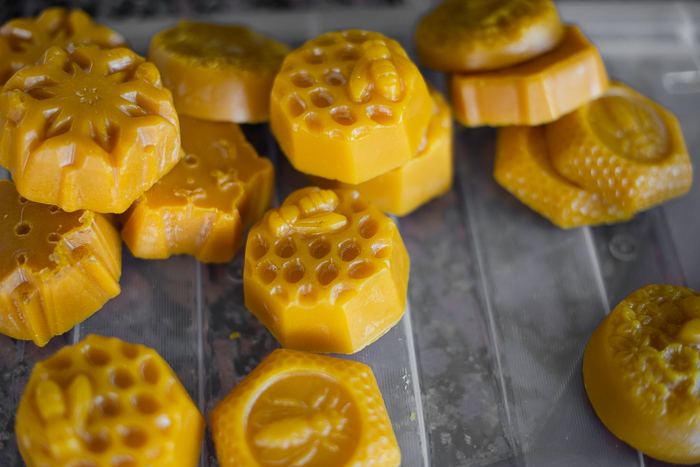 This is beeswax from a couple of years ago. It was older wax when I processed it so it had a deeper color. I love all the shades of beeswax from pale almost green yellow to deep orange. The darker shades are my favorite and I love the way that dark wax smells. 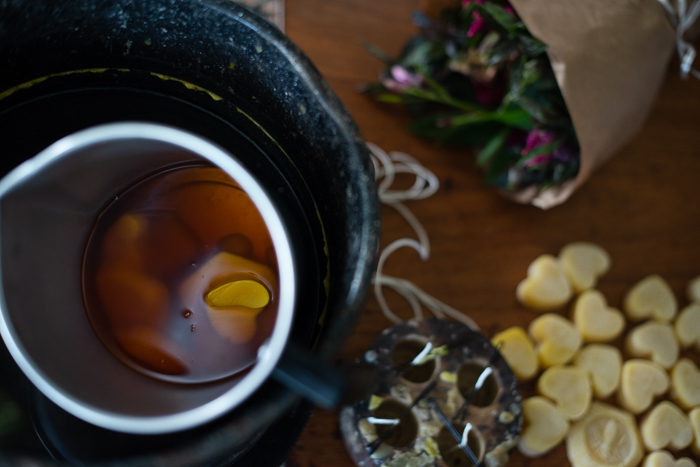 I borrowed molds from a friend so I could make some candles with our wax. She gave me tips and even supplied me with candle wicking. It was the most satisfying project! 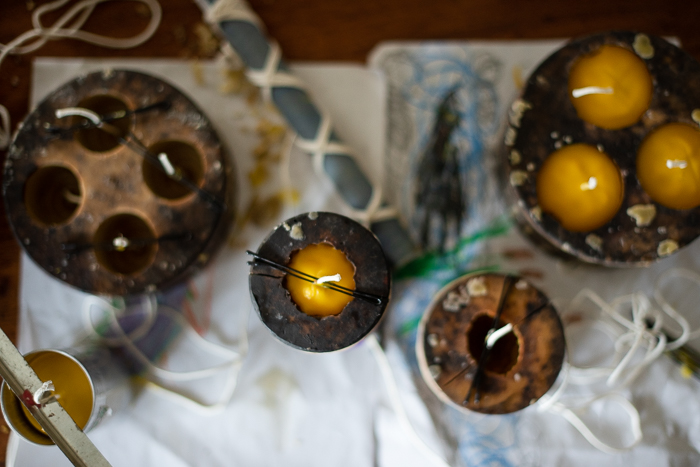 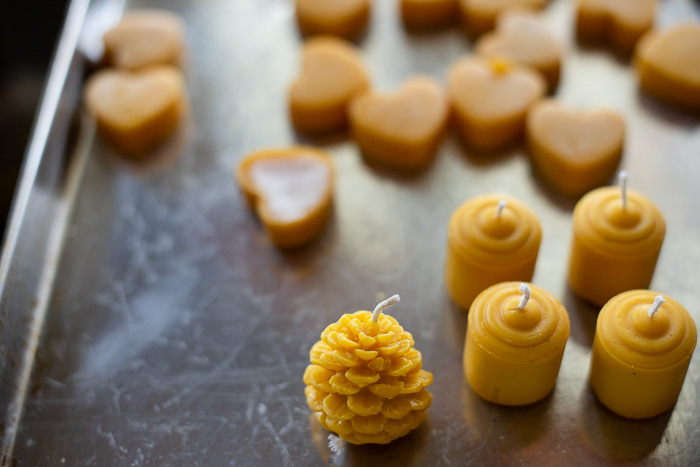 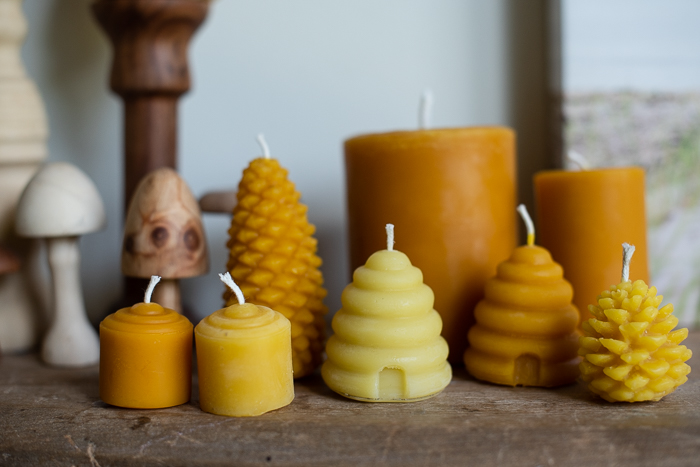 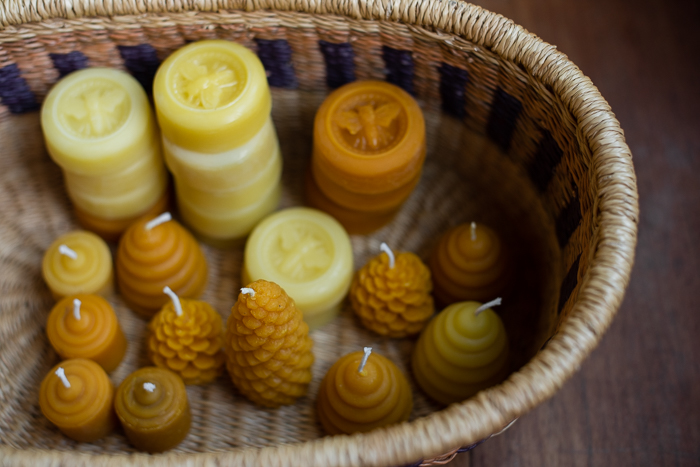 What starts out looking like loads of beeswax melts down to not as much as you might think. But, I have a little stash of wax for making more candles someday, and I was able to give some candles as gifts. I have a nice little stash for us as well. I love the beeswax just as much as I do the honey! 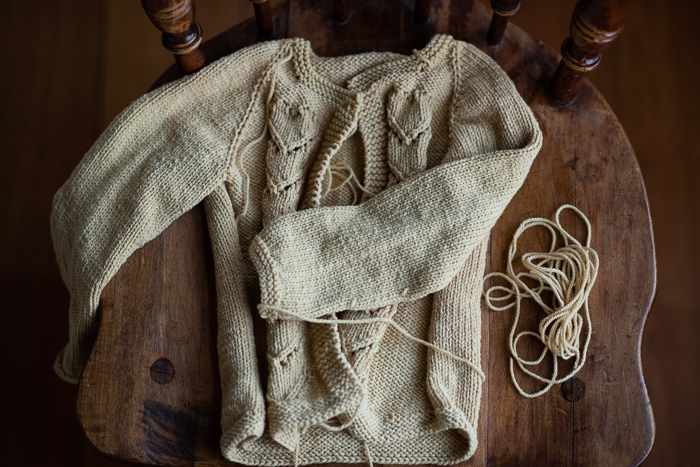 p.s. This sweater is blocked now but still waiting for buttons. 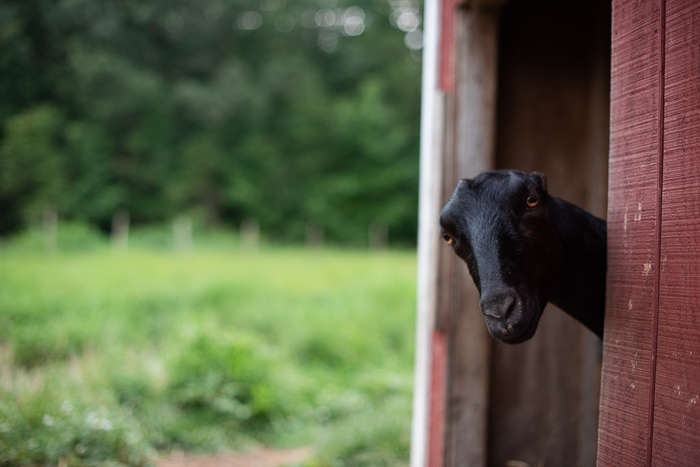 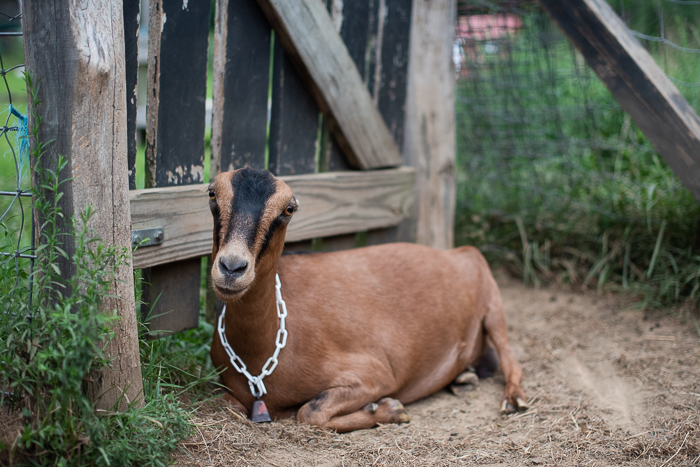 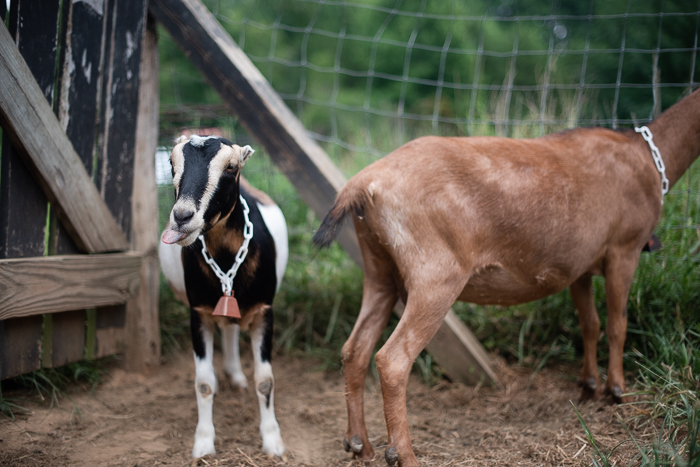 p.p.s. We still have all three girl goats and Tilly is still a brat. I did make a batch of soap with Greta’s milk and some of our beeswax and honey. It turned out great and I’ll have it in the shop in a few weeks.