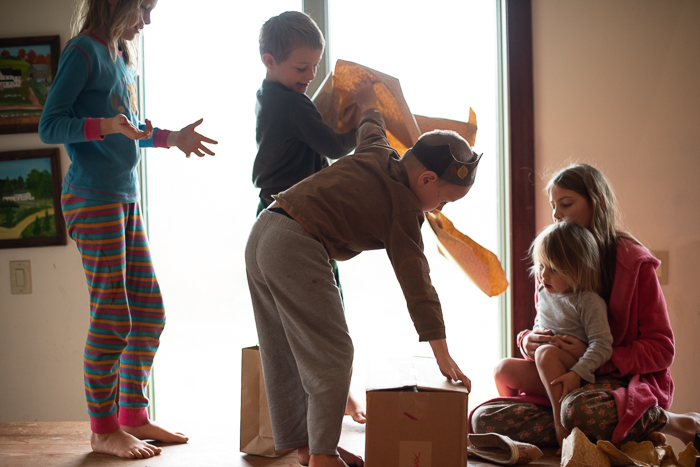 Writing here, after not writing for a week or two, is difficult for me! I quickly get out of the habit, and then I feel awkward, and don’t know where to start. I feel silly just telling you that.

It’s been an incredibly full couple of weeks and I’ve been sick throughout. That’s the thing about being sick isn’t it? Life doesn’t stop just because you are under the weather. I’ve continued to do all the things, and we’ve celebrated two birthdays. 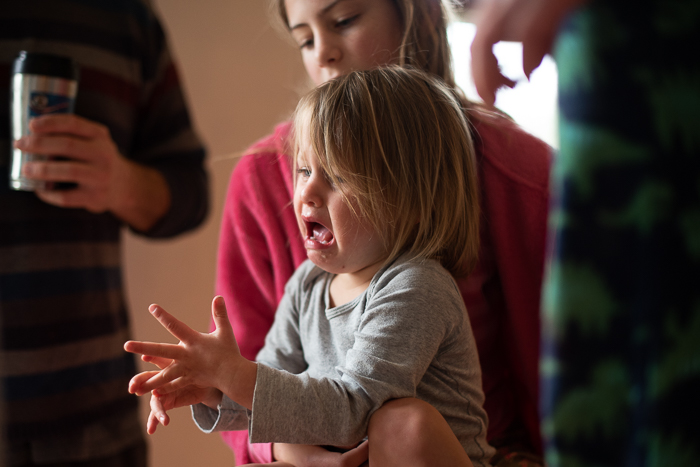 This is how Mabel felt about that on Job’s birthday.

According to her, it was her birthday too. She even ran to my closet to dig out her birthday crown to prove it. Still, no one let her open any presents! 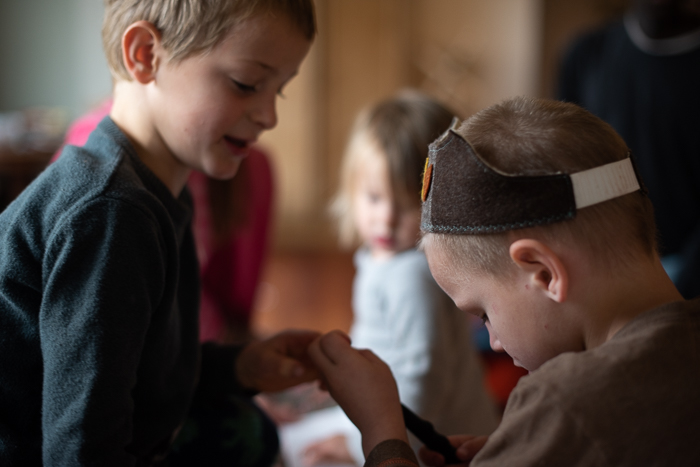 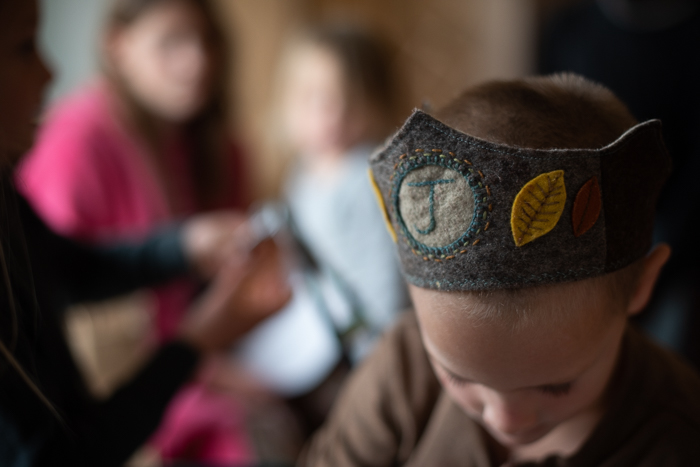 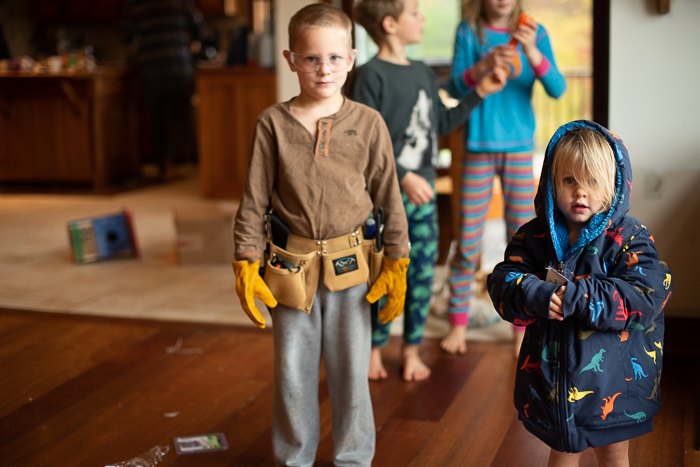 Job received a tool belt and work gloves, and Jonny and I stocked the belt with inexpensive tools we bought at a local store. He was very happy with his gifts. His exact words were, “Now that I’m an actual guy that builds, I’m happy.” Job says adorable things like that all the time. We recorded that one in our little One Line a Day book. 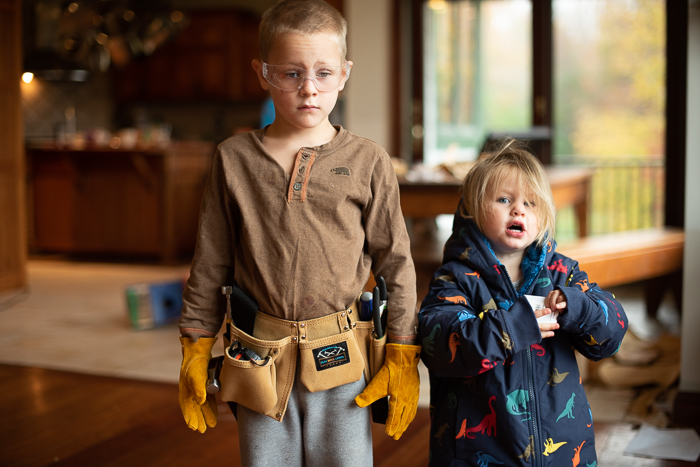 He also received a new coat, though Mabel put it on and told us all that it was, “MY COAT.” Job didn’t argue with her. 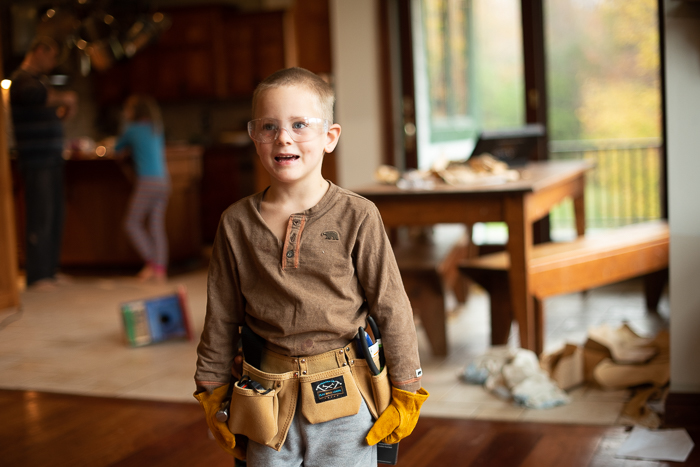 I told him that he absolutely must wear the safety goggles while using his hammer. And then when he wasn’t looking I wimped out and hid the hammer. I just don’t think he’s quite ready for a real one. He didn’t notice its absence, and now I don’t have to worry about him hammering himself in the eye.

I had a last minute inspiration, and Jonny and I took Job on a date, just the three of us. We visited a small children’s book shop where he was allowed to choose one book. Afterwards we took him for a treat. Walking down the sidewalk, he told us with a big smile on his face, “Let’s do this every year. This is the best birthday ever.” He wasn’t referring to the gifts, or the treat, it was the time alone with us that made it the best. Yes, I think we’ll do that every year. Sweet, sweet Job. Five years old! 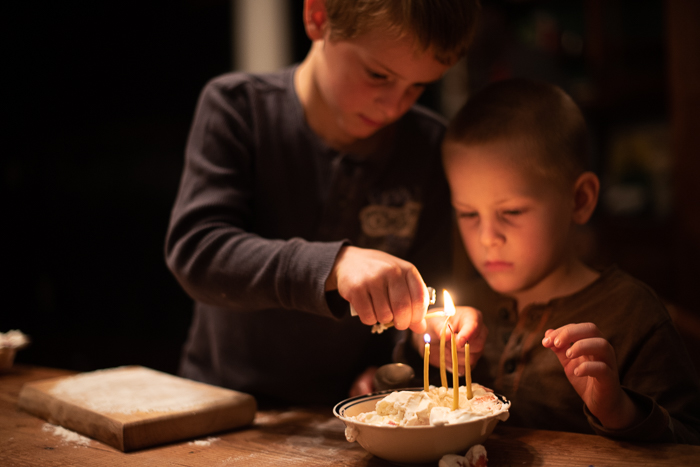 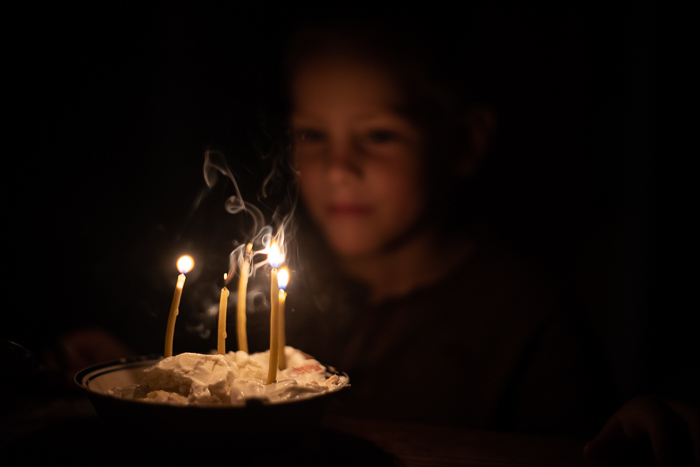 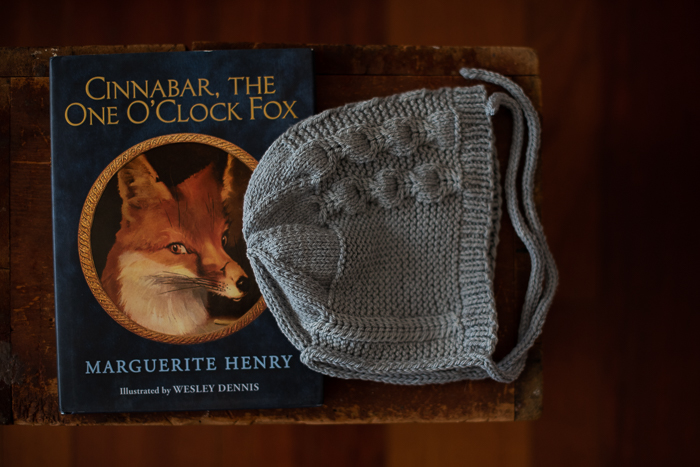 Next up, we celebrated Beatrix’s tenth birthday. Well in advance, I knit her a Silverfox Bonnet at her request in hollyhock dyed yarn, but for some reason, I hid it away without ever blocking it. Now she doesn’t want to part with it and it really needs to be blocked! To go with her bonnet, I bought her a special book, and wrote the most awkward inscription inside the cover. Next time, I’ll write elsewhere first and make sure I have my words right before picking up an ink pen and writing in the actual book. 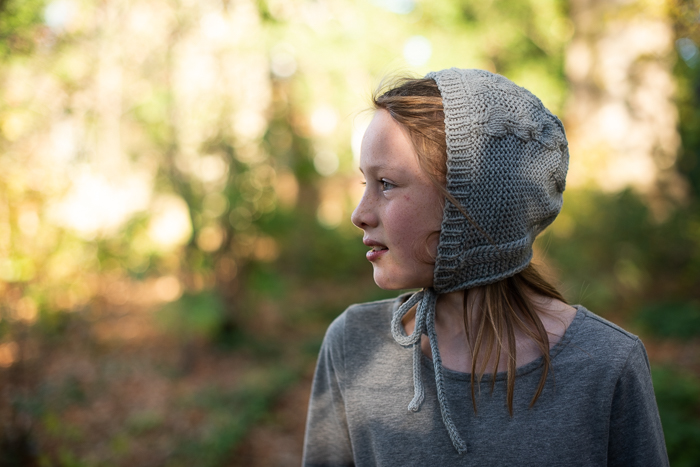 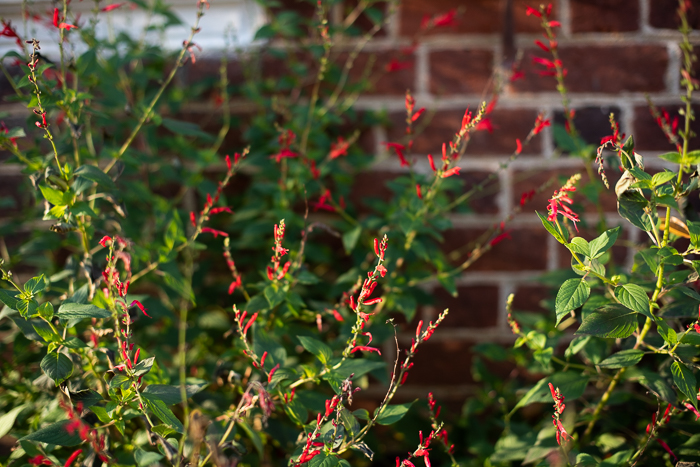 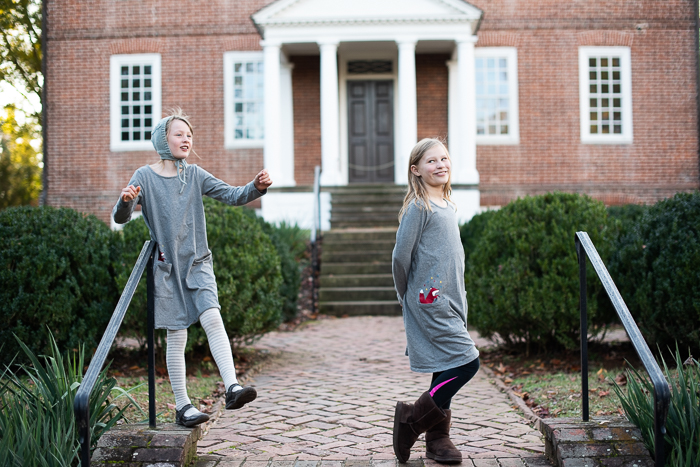 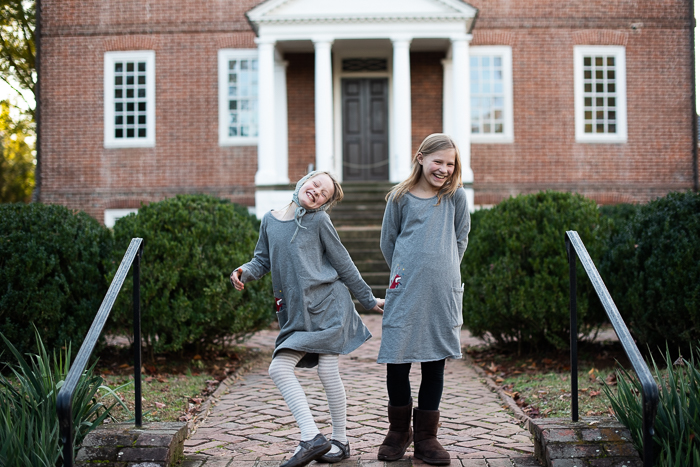 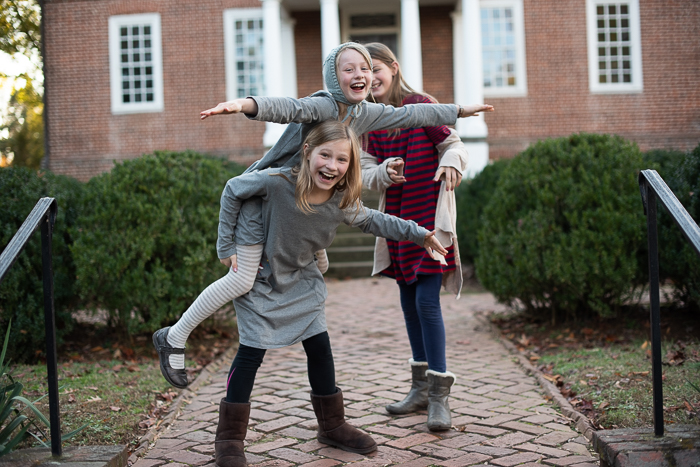 Beatrix really had quite the birthday week. There were multiple get togethers with friends, and on her actual birthday I took her out to lunch along with Larkspur and their friend, Istra. Those girls are so, so silly and I’m so glad they have each other to be silly with. 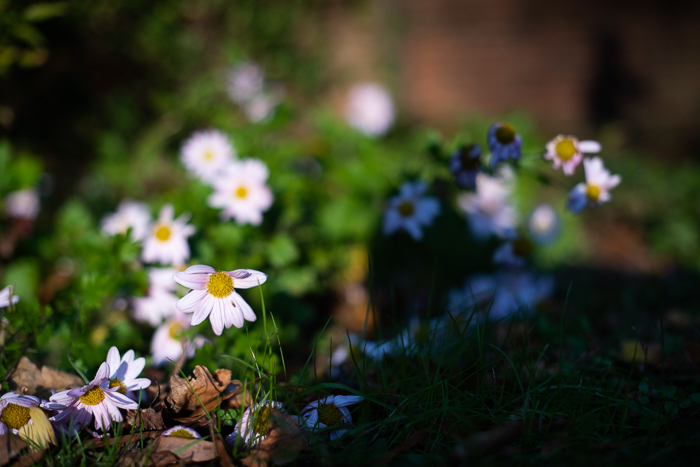 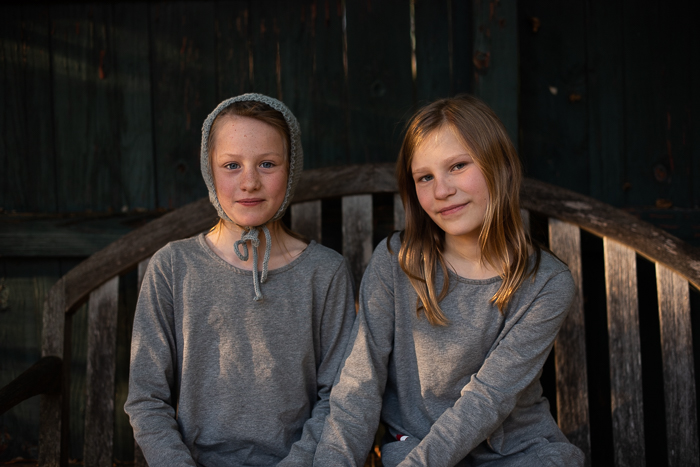 I did not sew Beatrix a birthday dress. She started planning this year’s dress many months ago. I bought the fabric (plain linen), I bought a pattern, and I even had it printed at our local printer (per advice I kindly received) because it was a pdf pattern. I ironed and cut and planned, but I still haven’t sewed it. It’s difficult for me to clear the time and space both physically and mentally to sew to begin with, and adding illness to that was too much. Thankfully, I purchased little matching dresses for Beatrix and Istra after they saw them online weeks before and noted that they liked them. I surprised them with those on Beatrix’s birthday (well, they weren’t really surprised), so Bea wasn’t without a new dress. And I will sew that birthday dress. Probably this week. We don’t have big Thanksgiving plans, so I am hoping I can get it done. I just have to sew the first seam, and then I think I will be good. 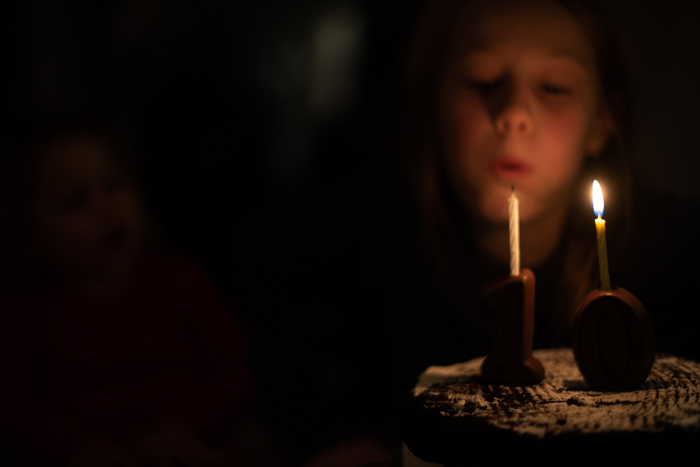 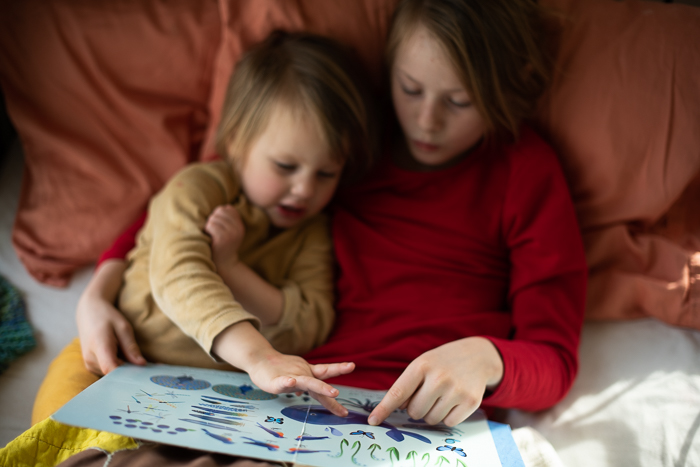 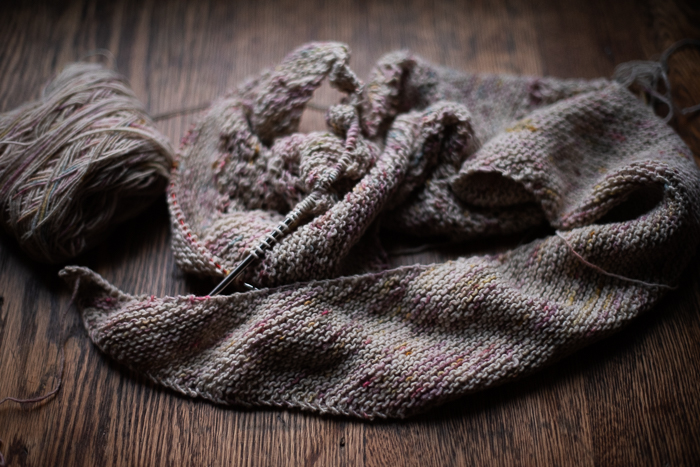 I’m still trying to recover from this yucky cold, and I’ve been reading lots (almost finished with The Fellowship of the Ring), and knitting too. I’m grateful that this week will be a slower one, and I can relax a little more. For those of you traveling for Thanksgiving, I pray for safe travels for you and a cozy time with your loved ones. Maybe I’ll have a dress to share next week… In the meantime, Happy Thanksgiving!