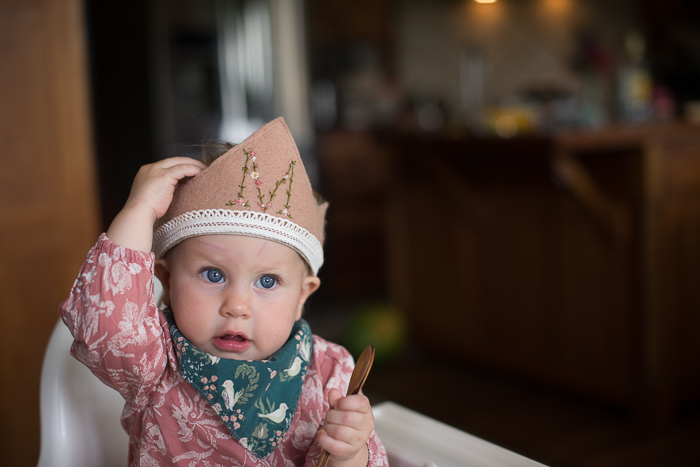 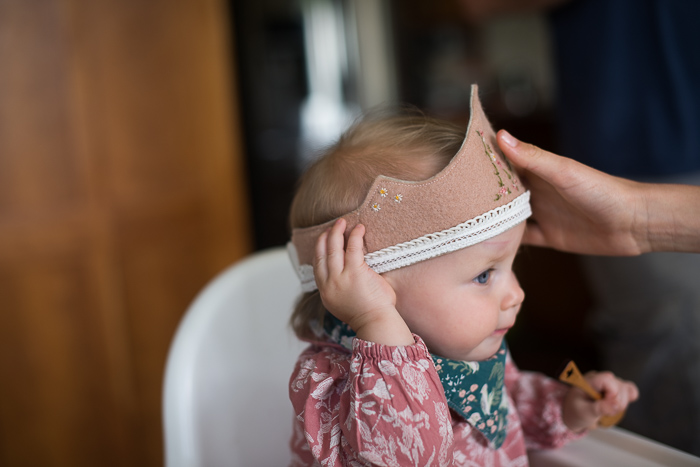 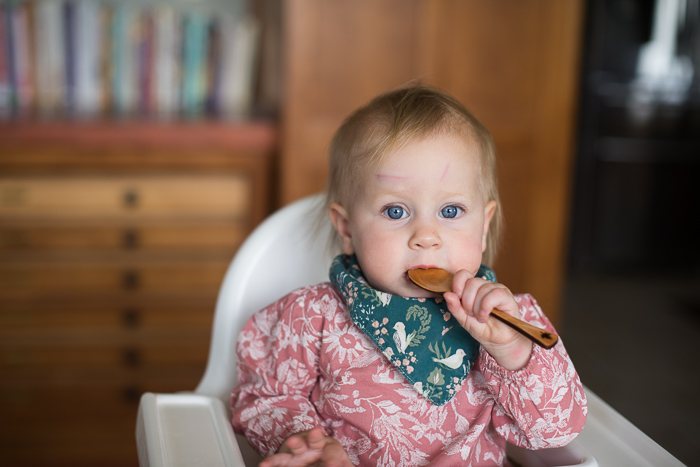 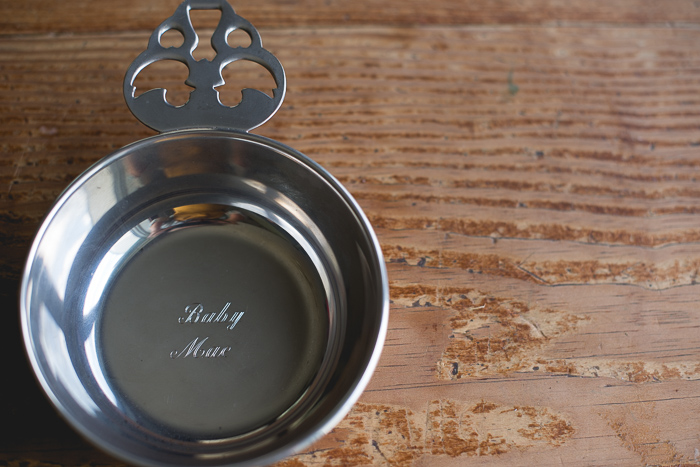 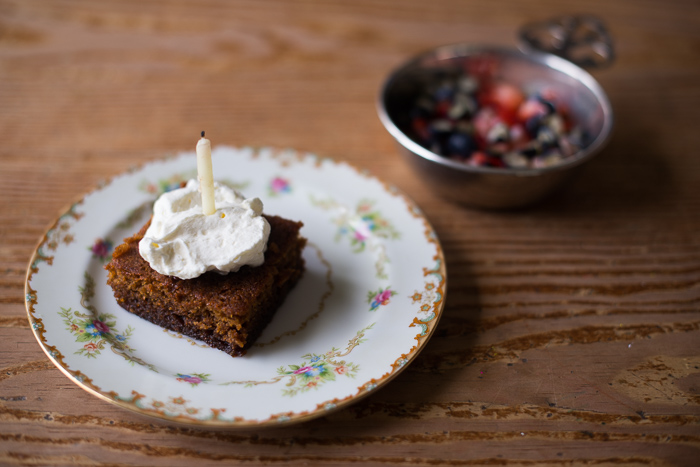 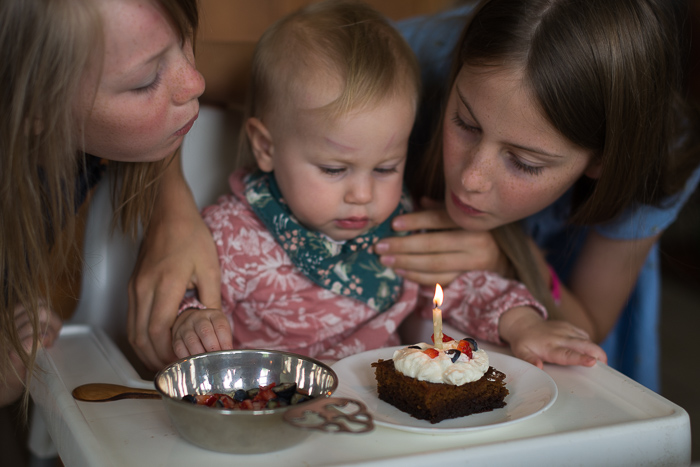 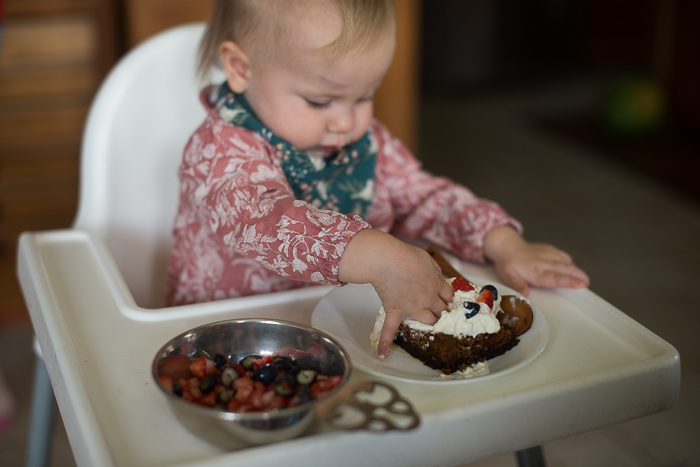 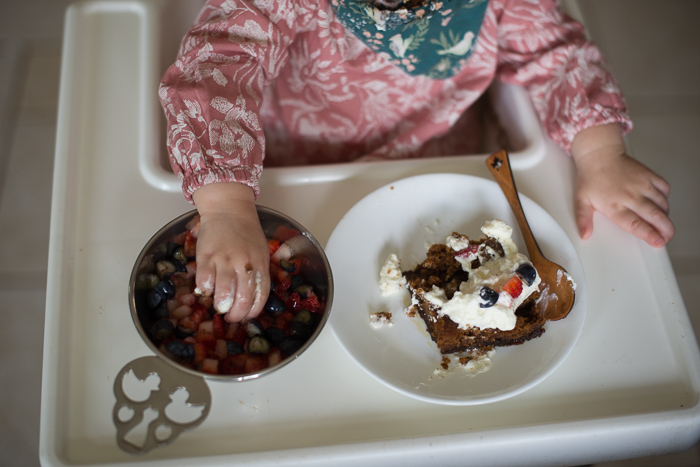 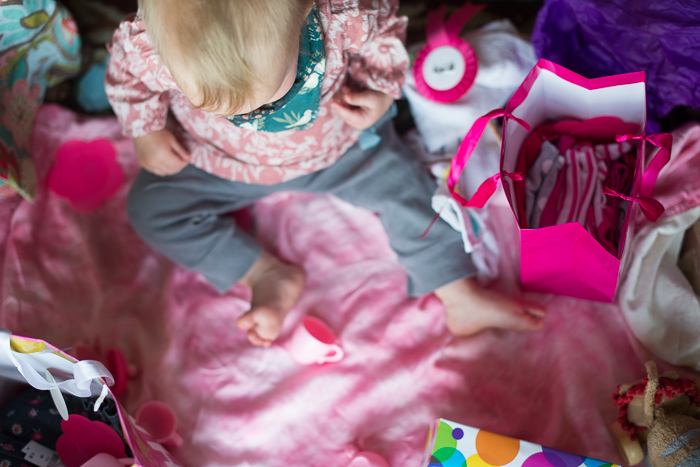 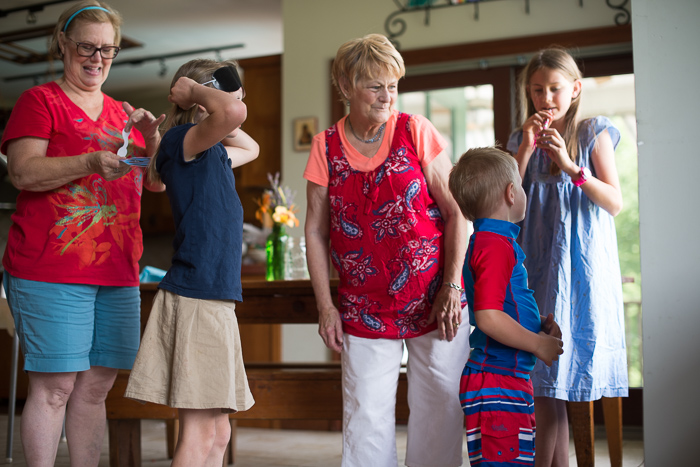 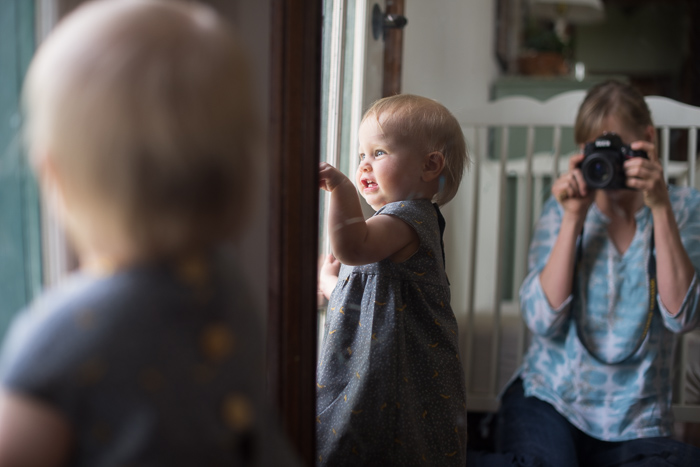 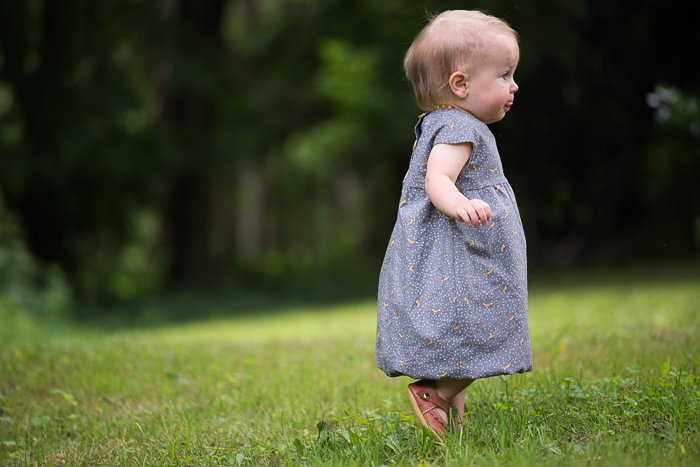 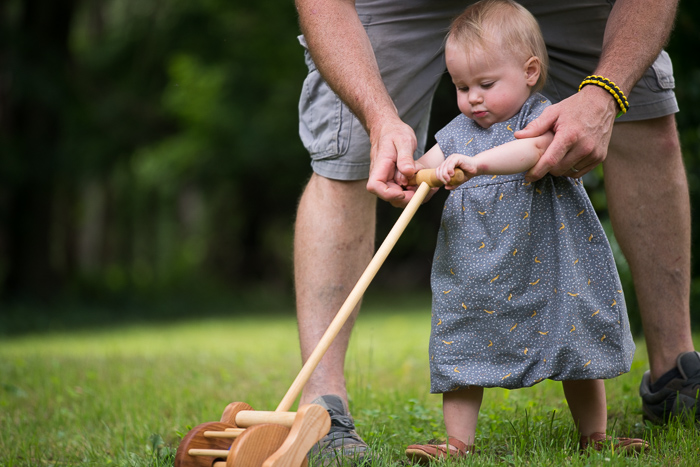 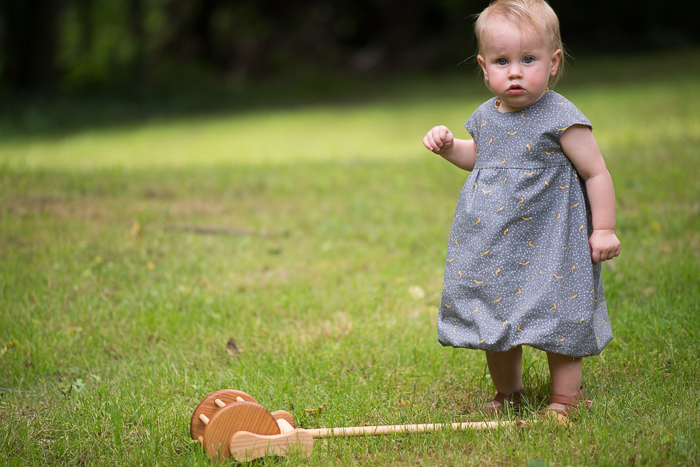 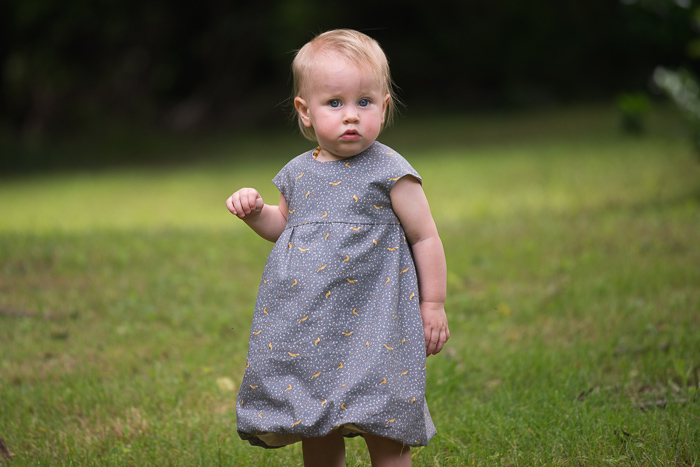 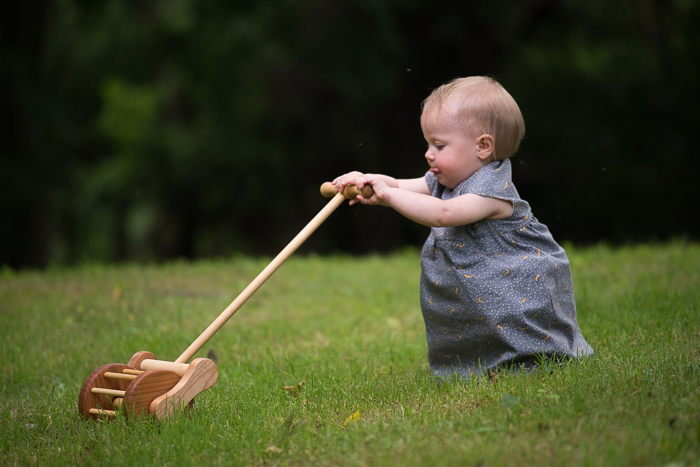 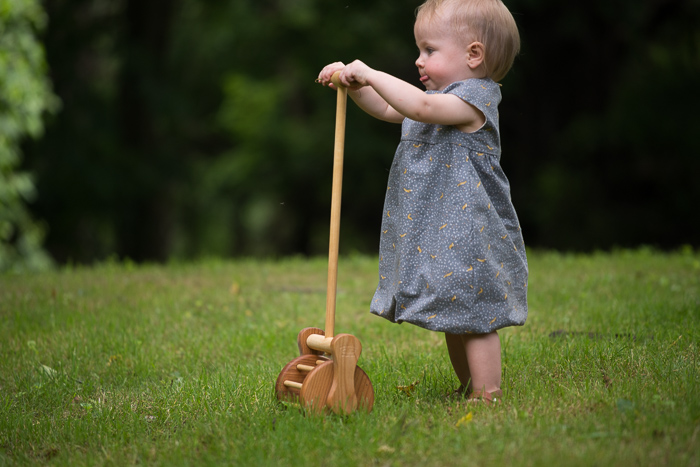 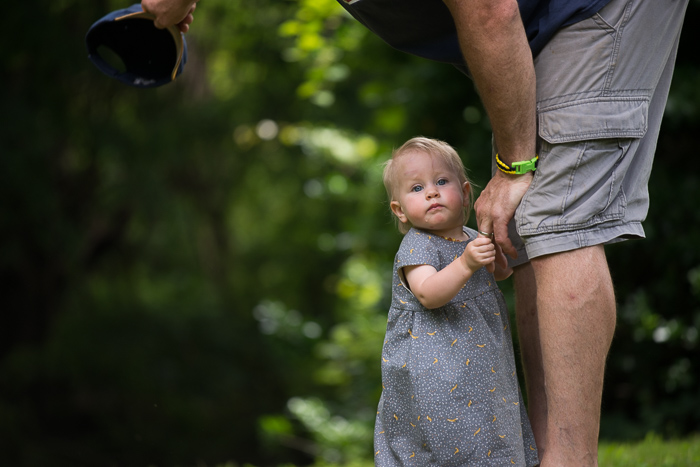 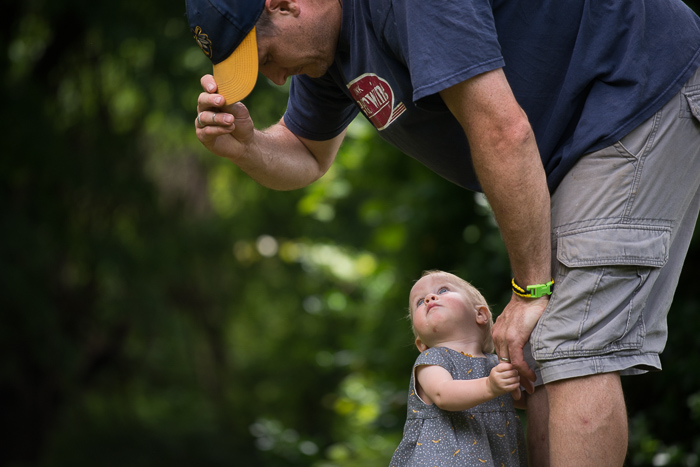 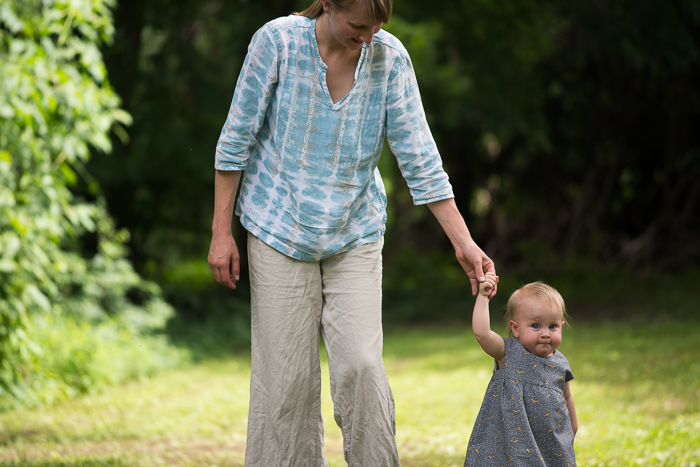 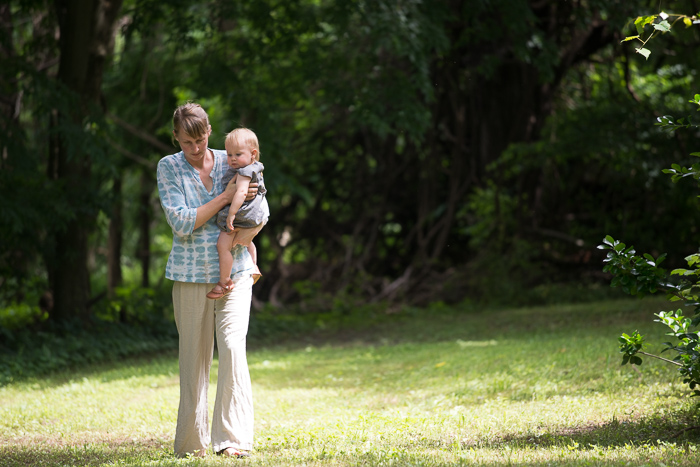 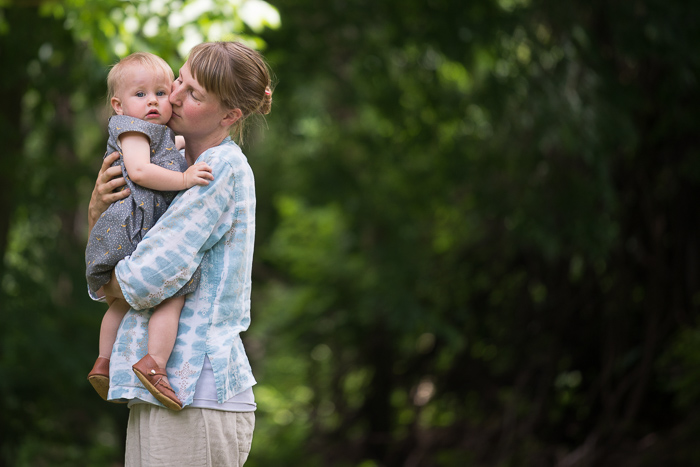 Mabel’s first birthday began as they often do, with a minor head injury. Truly, I think most of my kids have some sort of facial trauma occur right around the first birthday, one of the hazards of early walking. Larkspur was an exception to the rule because as I recall, she waited to walk until she was fifteen months old. Also in keeping with her one year old status, Mabel rejected her birthday crown. It’s okay, I expected this. She’ll love it at two, or at least by age three. I made it with wool felt that I dyed with avocado stones, and embroidered it by roughly following a pattern from this lovely book. The trim at the bottom is some I removed from a vintage collar I’ve had stashed away for years. The website with the pattern I followed is unavailable right not, but here’s a great tutorial, if you need one!

Looking through my photos from the day, there weren’t many smiles! It’s not that Mabel was unhappy (well, she was when she banged her head), she was just so focused, taking everything in. We did the usual things: ate cake with whipped cream and opened gifts. Mabel’s first gift was a simple wooden spoon, which she was quite pleased with. Jonny’s mom, “Mimi,” was visiting with a friend, so there were extra gifts (engraved ones, too!) and even pin the tail on the donkey for the other kids. I worked hard to stay in the moment and not think unhelpful thoughts such as, “She’s not a baby anymore!” (Yes, she is.) After cake, we spent some time sitting on the floor playing with wrapping tissue and gifts. At one, the packaging is always just as fun as the gifts themselves! Then we took her outside to play with her “big” gift, a wooden lawnmower toy, because it was moving way too fast for her on the hardwood floors. She’s not quite steady enough for it yet, but she gave it her best try, complete with her tongue sticking out in concentration. She’ll be ready for it soon! We all know how quickly little ones grow up.

Here’s the recipe for her healthy-ish birthday cake, copied and pasted straight out of an email from my friend, Jaime.

preheat oven to 350
prepare 9×9 pan (i greased with coconut oil.) mix 4 eggs with 1t vanilla until they thicken (not stiff). add 1C honey. mix until smooth. in another bowl, mix 1/2C coconut flour, 1t baking soda 1/4t (sea)salt. add liquid to flour and mix well. (it will seem really thin but as the coconut flour absorbs the liquid it will thicken.) in a pot heat 1C canned coconut milk; when warm enough that the cream melts, add to rest of batter. it is really important to mix it, pour it into the pan, and get it into the oven promptly. it gets its texture from the hot milk reacting with the baking soda while it’s cooking so you don’t want to leave it sitting out at all.
i baked it for 20 minutes, then covered it with foil and baked it for another 20.