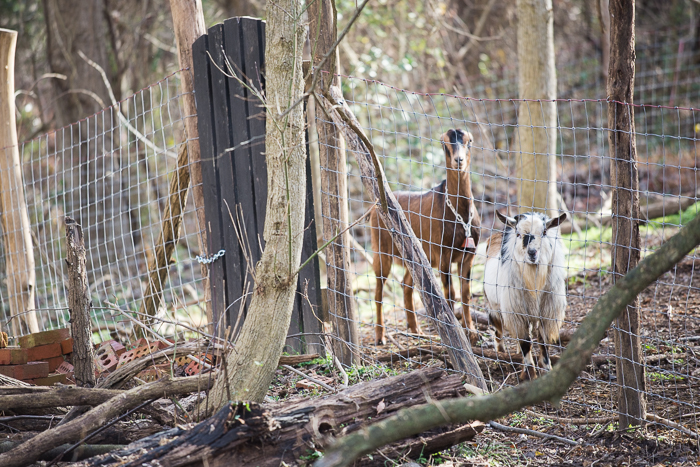 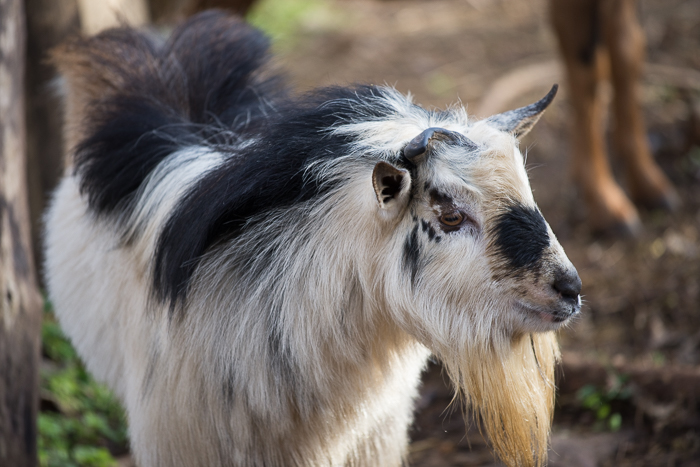 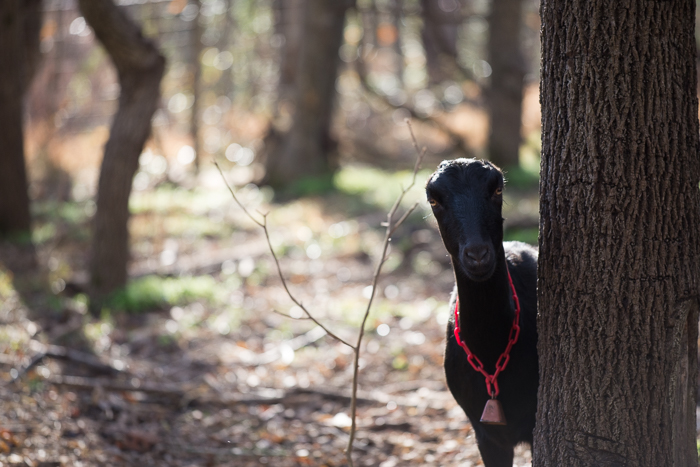 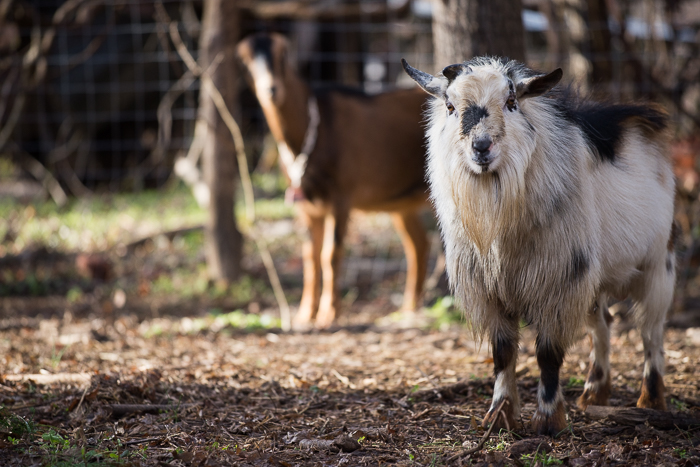 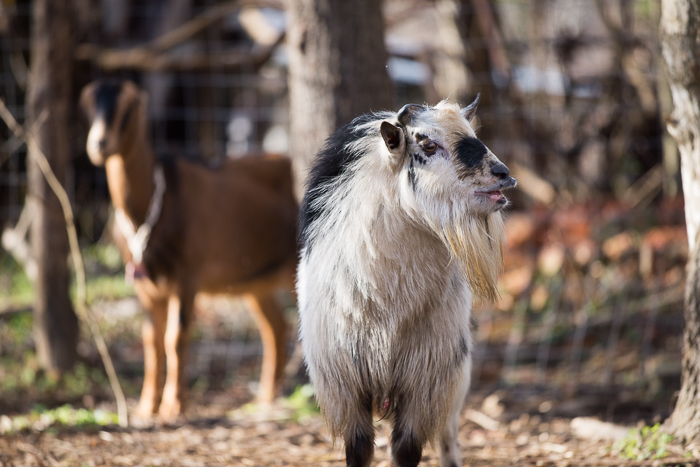 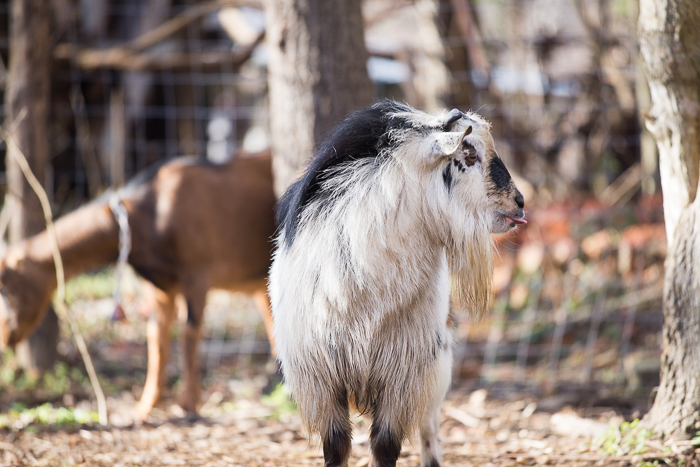 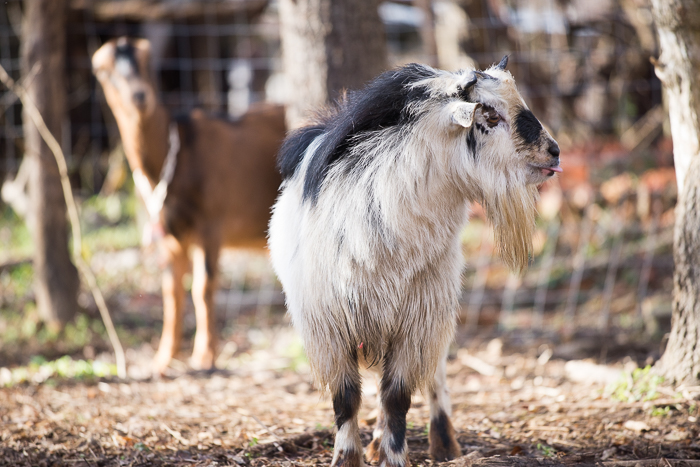 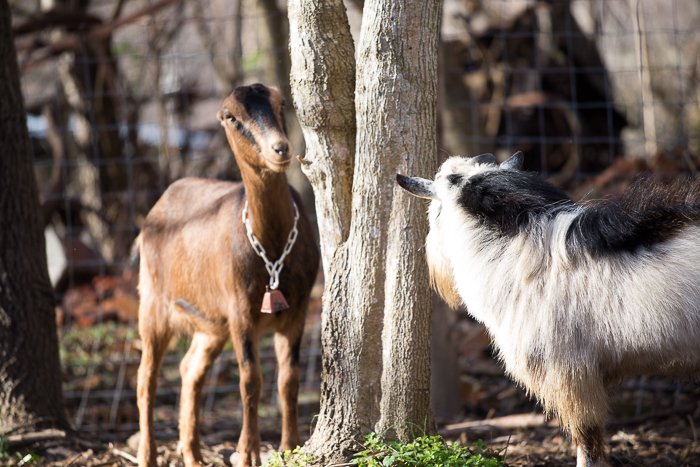 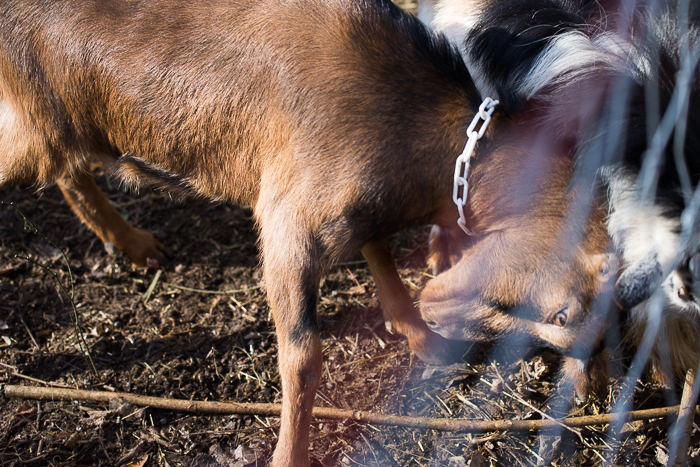 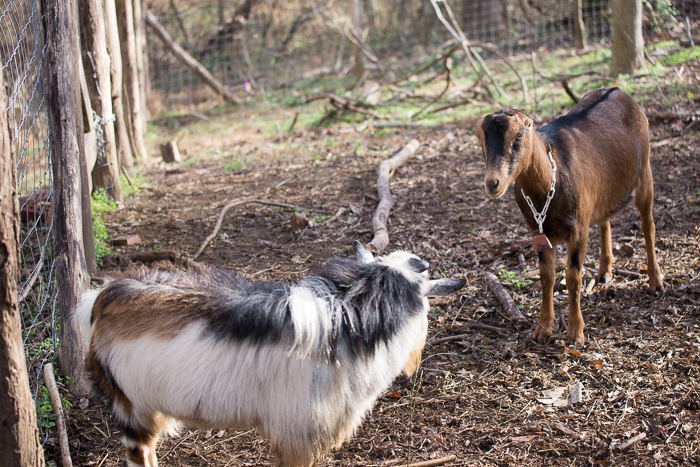 Agnes and Greta had a visitor last month, a Nigerian Dwarf buck named Vinny, who stayed with us for about three weeks. Though we took him home a week ago, I can still smell him when I visit my girls.  This was our first experience with a mature buck, and it was interesting.

My original plan was to carry the girls to a farm about an hour away to be bred to a LaMancha buck, because they are LaManchas themselves.  But in the face of the stud fee we couldn’t afford right now, the necessity of knowing when they were in season (wasn’t sure I would be able to tell), and just the general trouble of taking them to the farm, probably one at a time, I decided not to breed them this year.  Then I ran into a friend while out grocery shopping and we started talking about goats.  I mentioned my girls and the fact that we had decided not to breed them, and she offered her little stud goat if we were interested.  I initially declined, but after putting some thought into it, we decided that this might be a good idea, after all.  Breeding a LaMancha to a Nigerian Dwarf typically gives a mini version of a LaMancha.  They are considered good homesteading goats because of their smaller size.  Ultimately, no matter who we breed the girls with, there will be milk, which is the main goal.  But, I didn’t want to breed them with just any old goat, because we may want to sell the babies.  We’re not currently looking to have a huge herd of goats!

When we arrived at my friend’s farm to pick Vinny up, I smelled him before I saw him.  He’s an adorable little goat, but his smell is crazy bad.  Strangely, if you ask Larkspur she will tell you that he smells good.  Once we made it home, we placed him in the enclosure with our girls.  He immediately went nuts.  My entire family stood there on the outside of the pen, a rapt audience,  watching this goat do all manner of gross things, while Agnes and Greta did everything they could to stay away from him.  This went on for maybe a half hour.  It was kind of a hilarious scene with me trying to convince all the younger kids that they needed to go inside the house right that minute (no one budged) and Jonny saying that we needed to take Vinny back home right away because he didn’t like seeing Agnes and Greta being terrorized by him.  I convinced him that this was all normal, and that hopefully the girls would at some point decide that they liked Vinny, because that was kind of the point of his visit.  But I felt bad for them too.  Vinny was really obnoxious and the girls just wanted to stay close to us, and far away from him.

Jonny managed the care of the goats during Vinny’s visit because I couldn’t bear his odor.  Vinny didn’t like Jonny at all, so he butted him at nearly every feeding time.  But with everyone else he really was a sweet goat in many ways (no young children were allowed in the enclosure though), and Seth made friends with him.  Of course that friendship resulted in me shouting nearly every day, “Oh my gosh, Seth!  Did you wash your hands after petting him?  You did?  Go change your clothes!  I  mean it!  Now, now, now!  And wash your hands again!”

Because the girls are full sized dairy goats and Vinny is a dwarf, I am not completely positive that everything worked out.  I did some Googling around about making this kind of pairing, wondering if we needed to assist in some way.  I couldn’t find much information, but also realized that if this were going to happen, it would have to happen naturally, because there was no way I was getting involved.  We definitely saw signs of the girls coming into season while Vinny was here, and that changed their attitude toward him, but only briefly.  Only time will tell if they worked things out, but if they did, there just might be babies in April!  I do hope so.  I think they will be awfully cute.