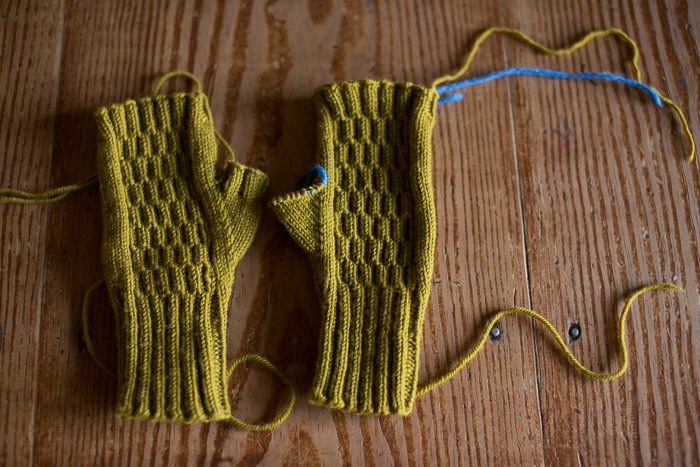 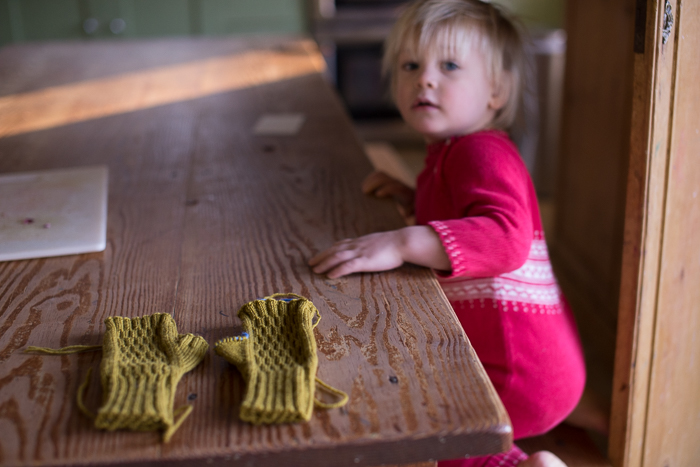 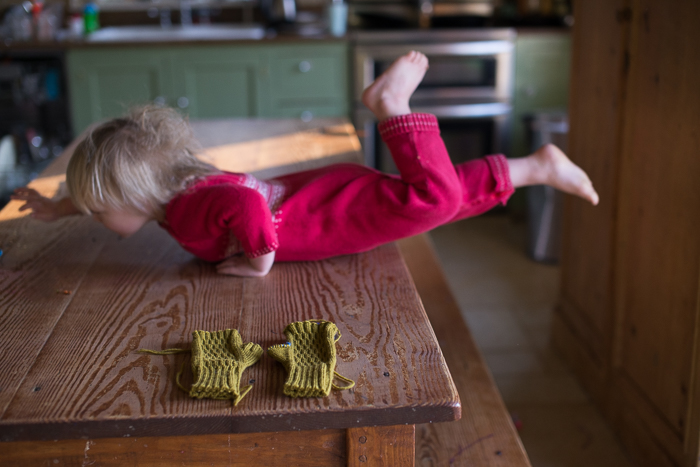 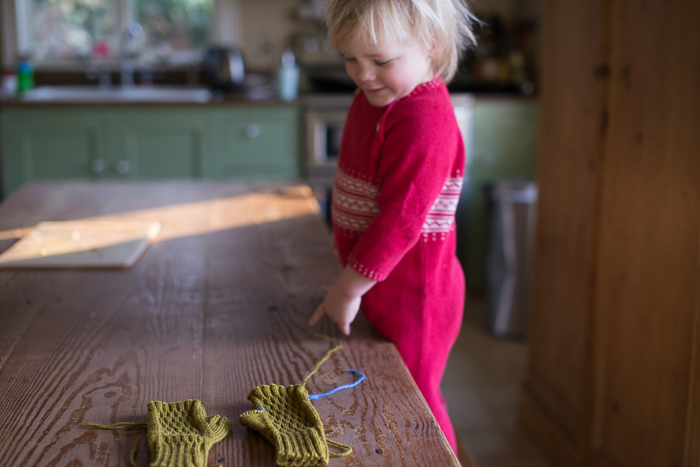 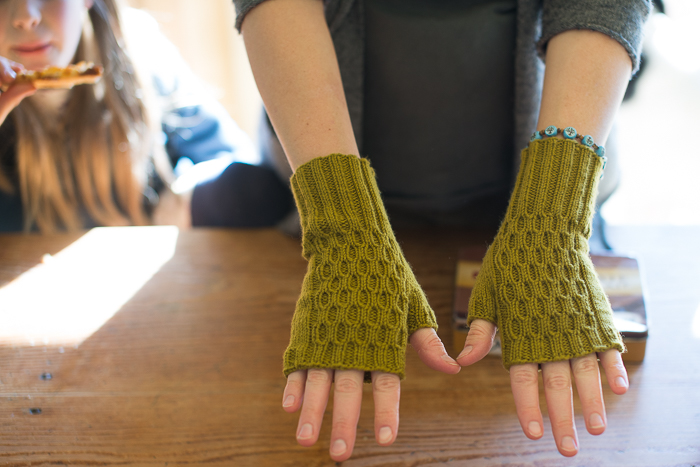 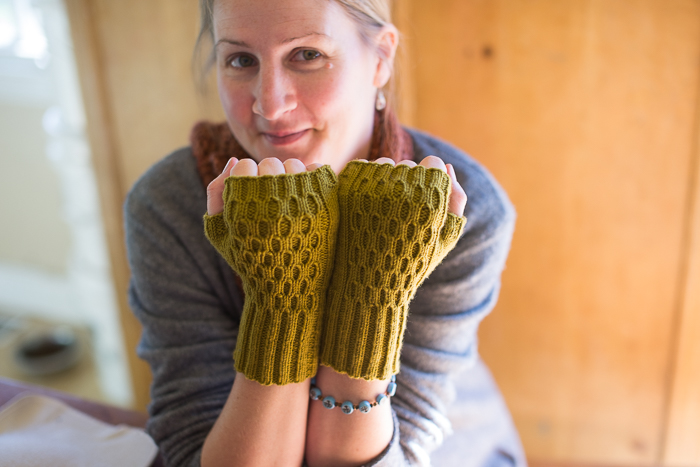 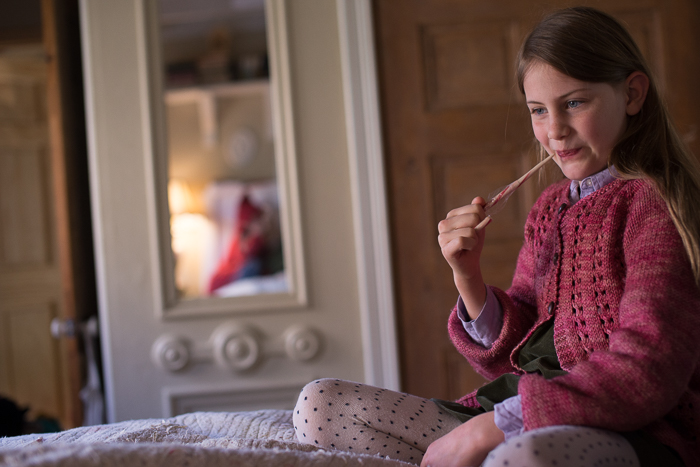 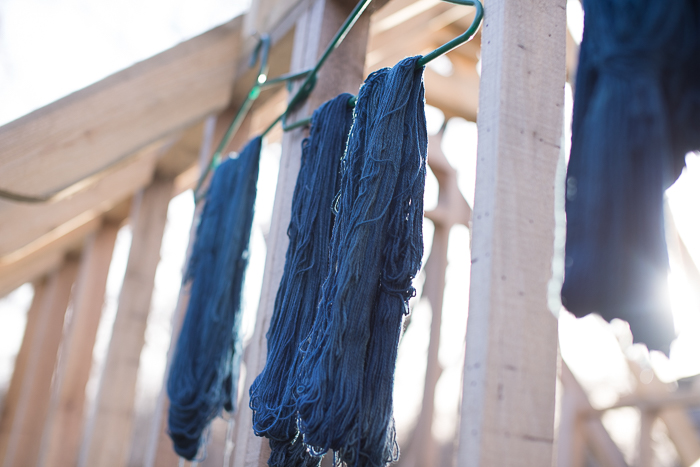 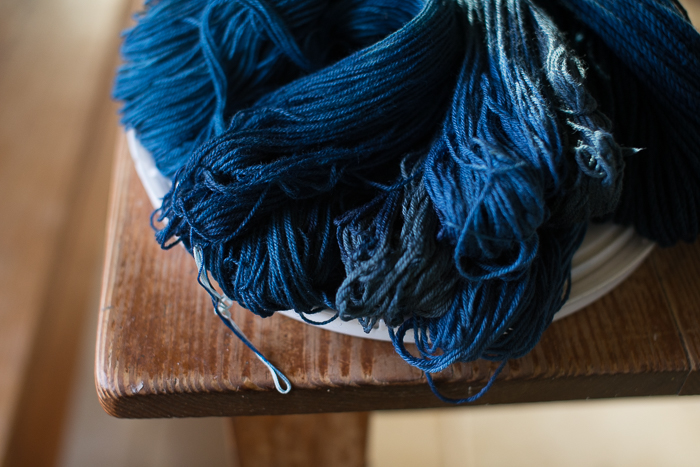 Jonny had to get an extra early start on Saturday, and I didn’t fall right back to sleep after waking with his alarm.  I lay there for a few minutes, between two little sleeping boys who had joined us at some point in the night, and decided that I might as well get up.  My plan was to listen to some Advent music, and knit.  I thought I would have enough time to finish my second mitt before the boys woke up.  I had only knit a few rounds when Silas came down the stairs, a full hour earlier than usual.  Job followed soon thereafter (probably because Silas opened all the shades when he woke up).  They have warm body radar, even in their sleep.  Next time, I should just stay in bed!  I did finish the mitts later in the day, and I am glad to have them finished, because according to my Ravelry notes, I started them in February.  I do like the color of the yarn, though were I to knit the mitts again, I would probably choose a neutral!  I don’t know about that color of green next to ruddy, cold, winter hands!  But they will look nice with my gray winter coat, I think.  So that’s good.

Sunday was another early morning. Larkspur was singing in the choir at the early mass, and everyone else woke up early to see what St. Nicholas brought.  The kids usually receive new socks and/or slippers along with a bit of candy, but this year I was late finding slippers for those who need them and I managed to buy the wrong size socks for my older boys, so there was only a bit of candy and an orange.  There were fancy dark chocolate covered marshmallows, and for those, I was forgiven for the missing socks and slippers.

I tried something new this weekend: dyeing with indigo.  Seth was supposed to help, but after I failed to follow the instructions for the first part exactly as laid out in the book

, he abandoned me.  I think he was surprised when he came home and saw all the blue yarn hanging all over the place.  The dyeing was a little tricky, and I would say that I had mixed results.  The yarn all looks pretty, just not exactly how I hoped it would.  Dyeing with indigo is clearly a skill that takes plenty of practice to perfect.

Okay, time for Monday!  I hope you all had a nice weekend and did some sleeping in!!  I’m already looking ahead to next weekend, when I will be able to stay in bed a little later.  I hope.