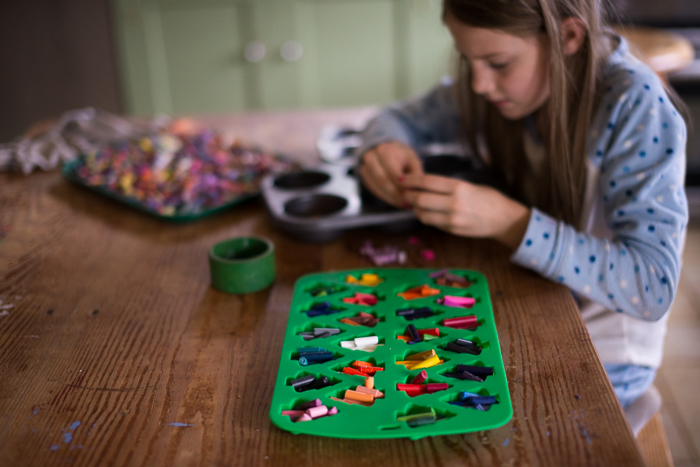 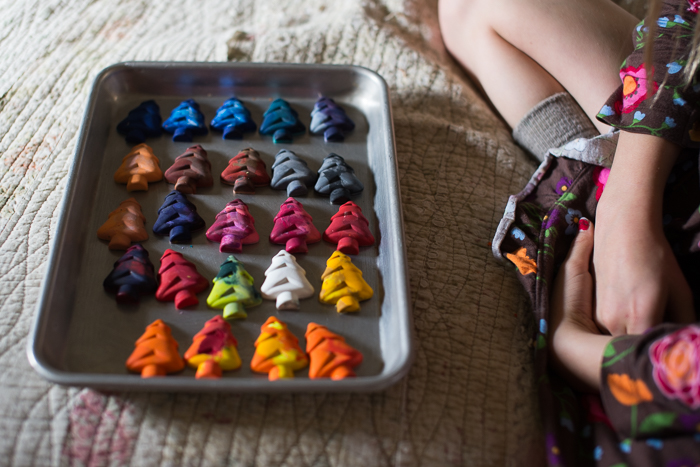 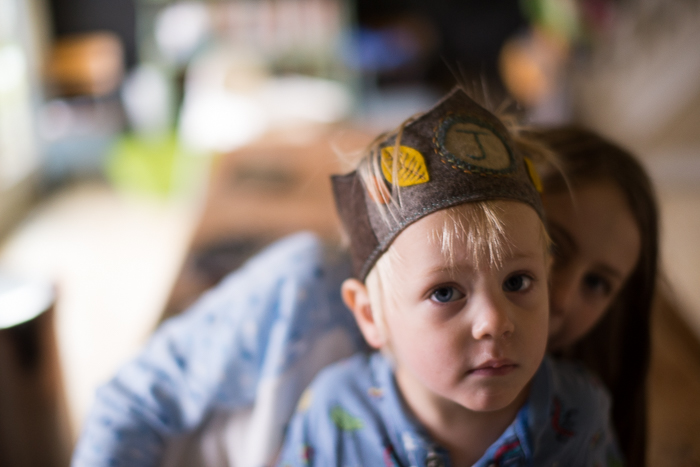 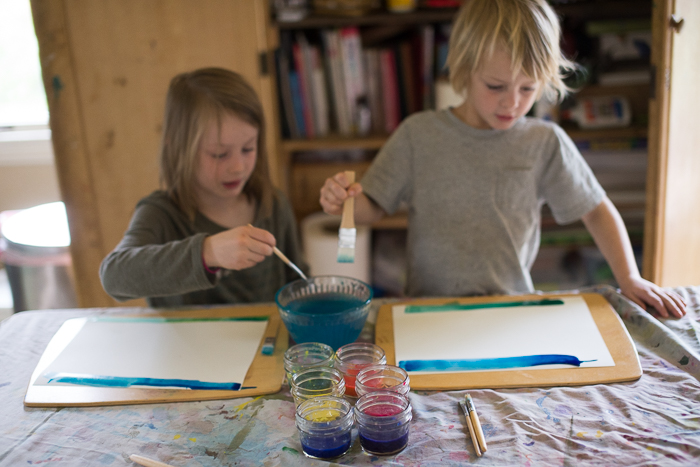 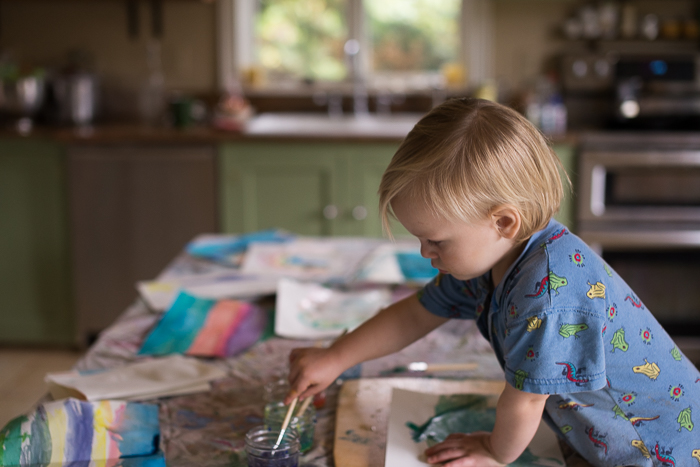 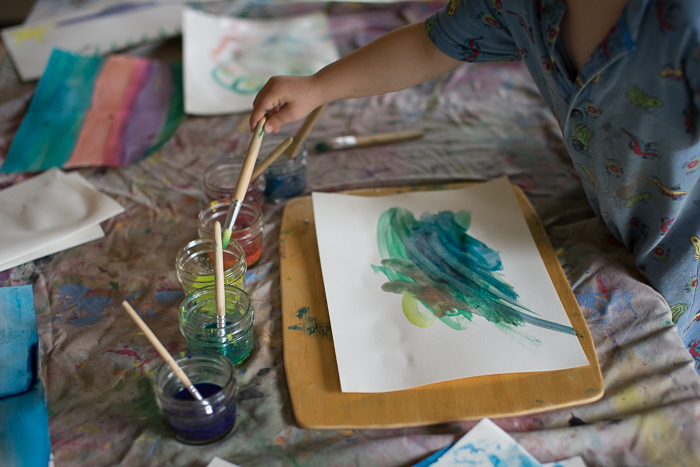 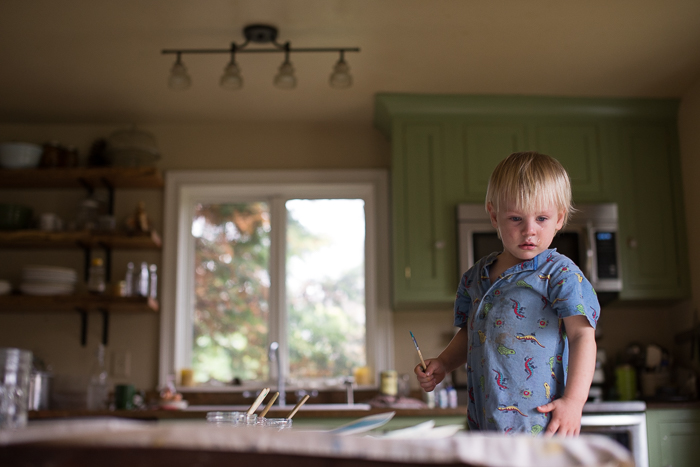 (kitty attacked his toes under the table!) 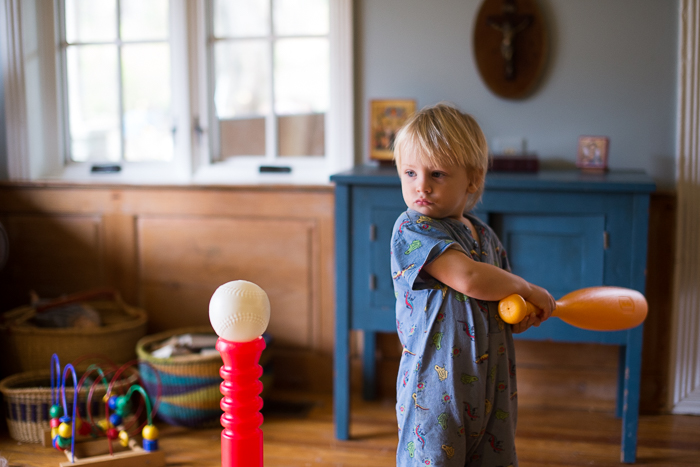 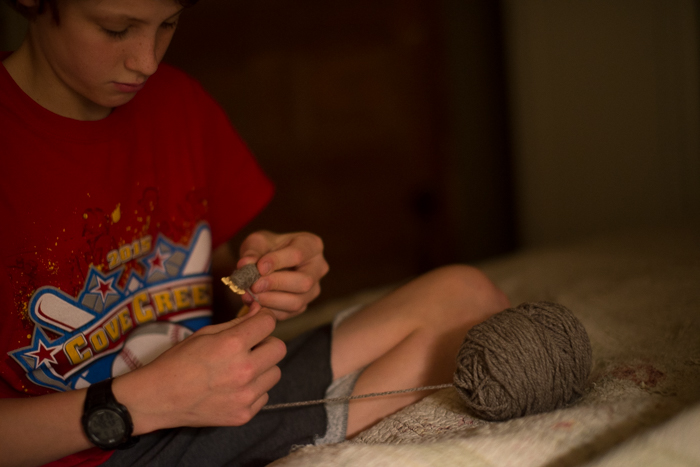 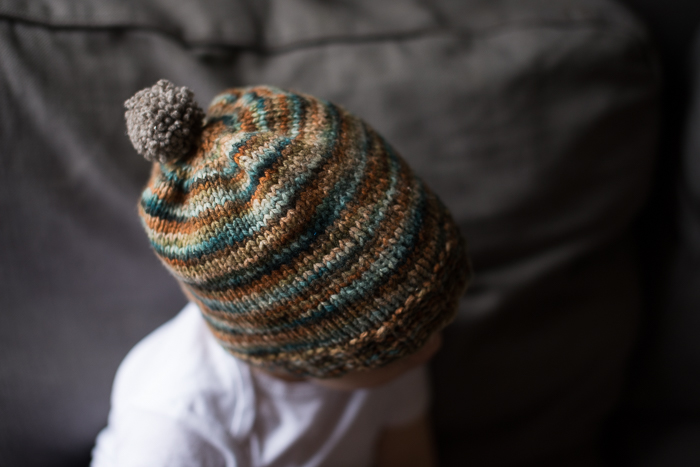 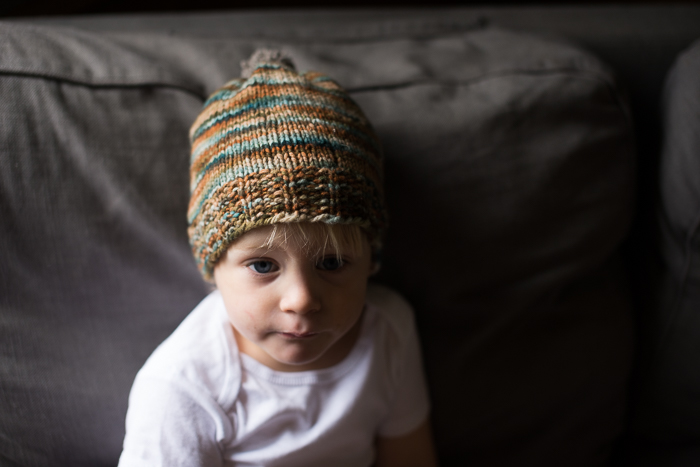 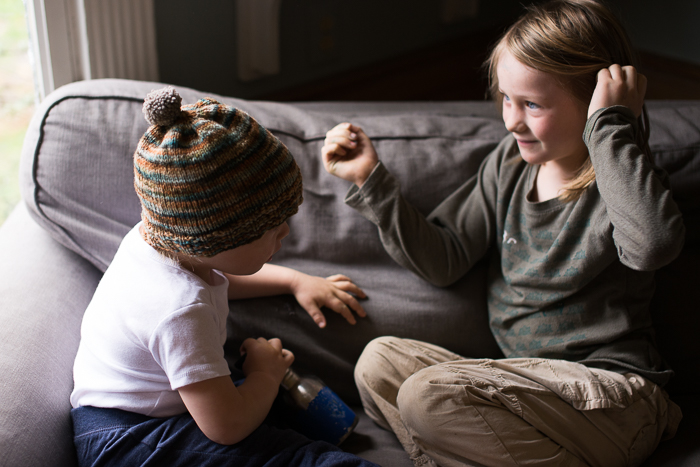 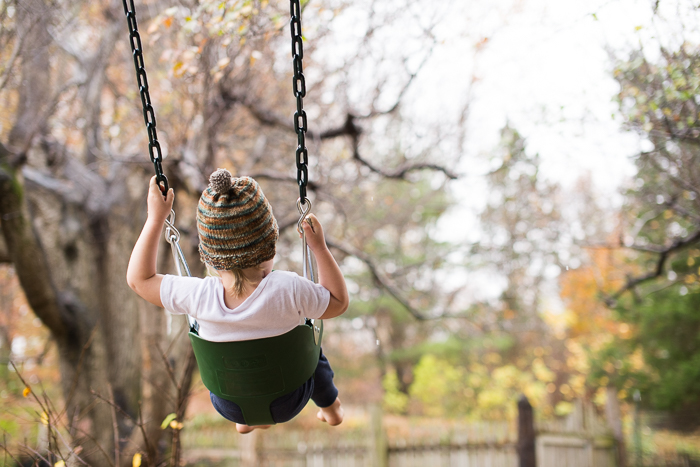 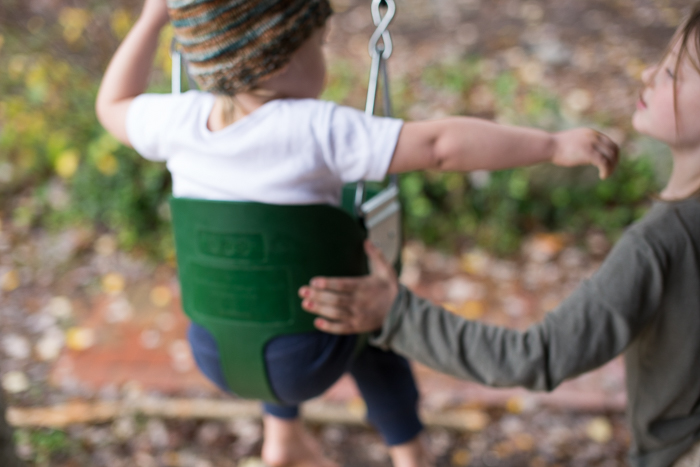 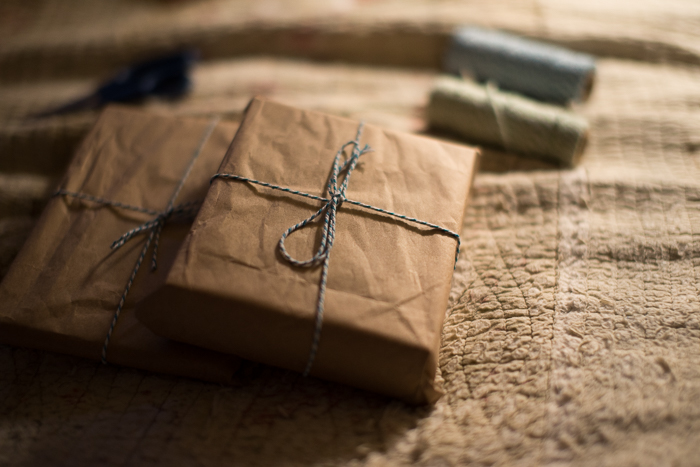 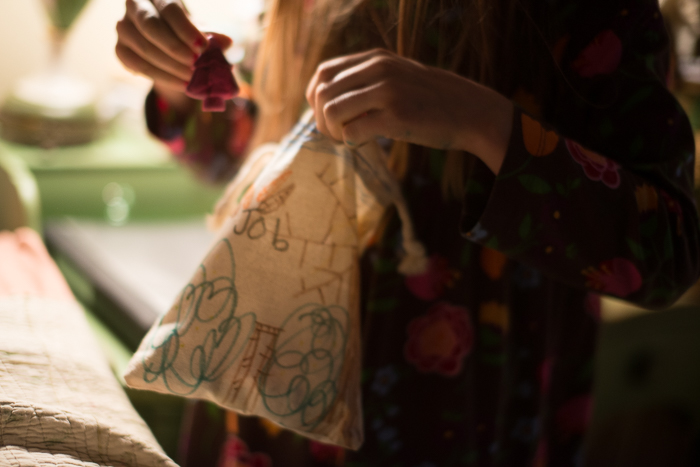 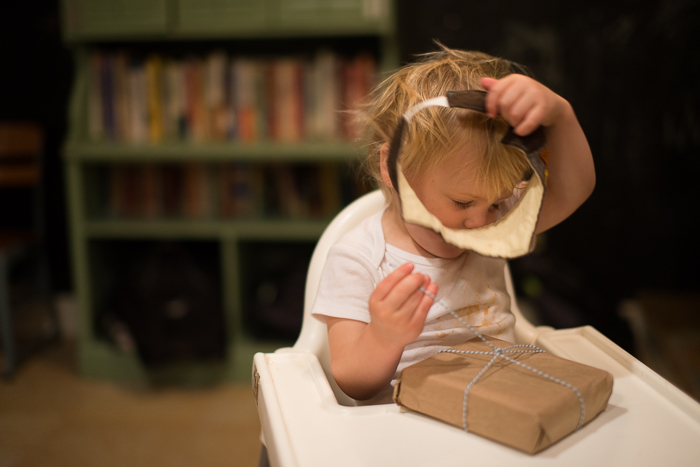 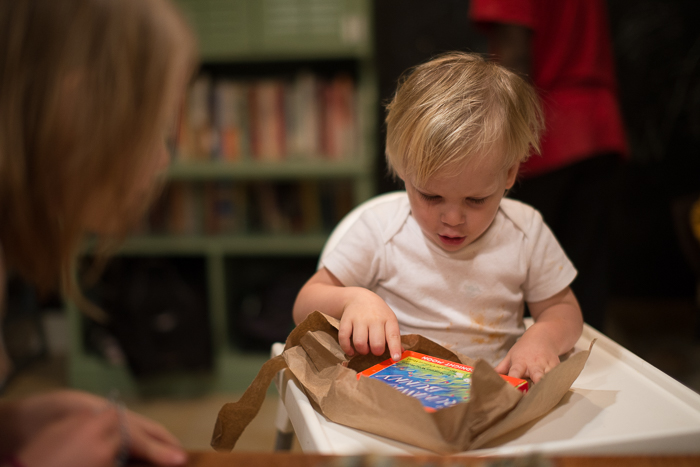 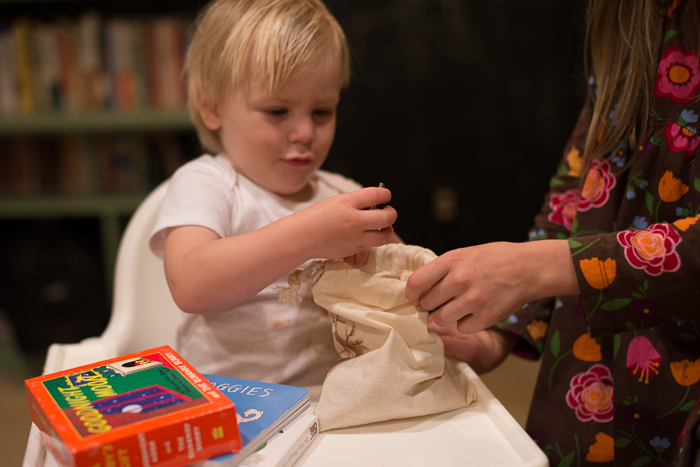 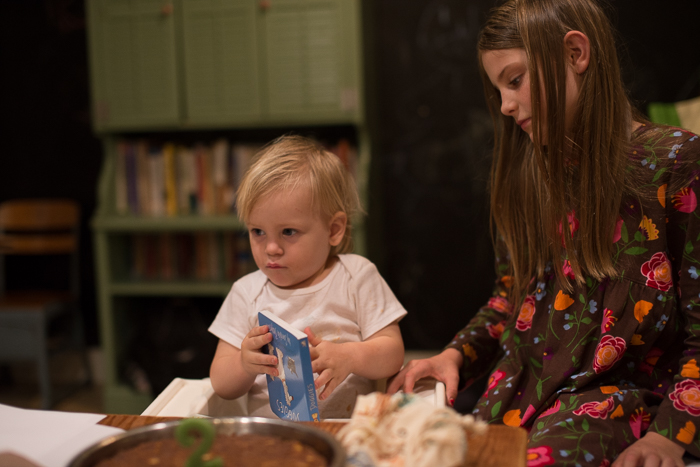 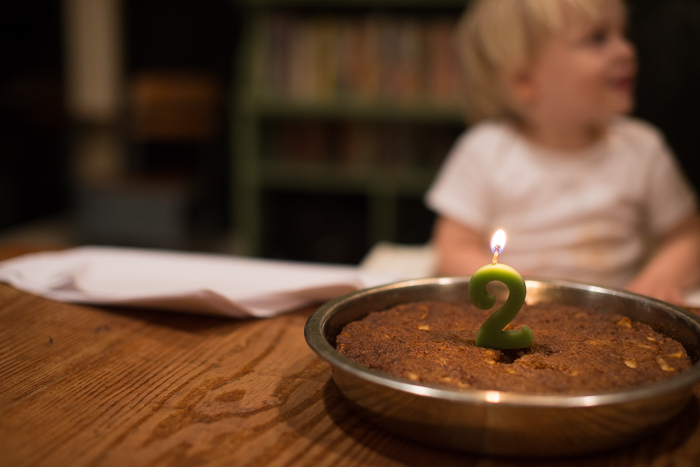 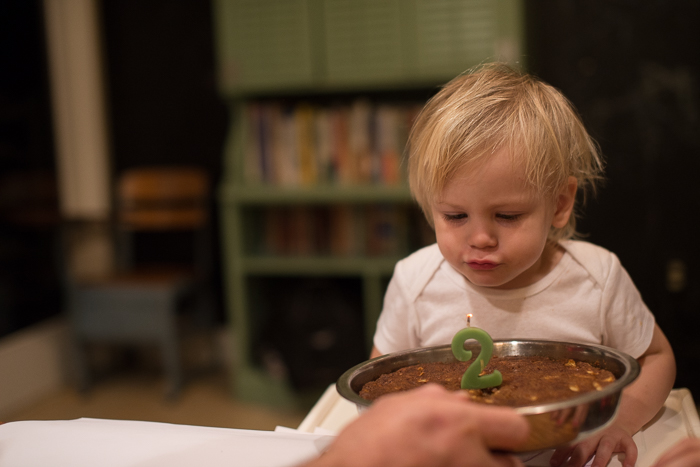 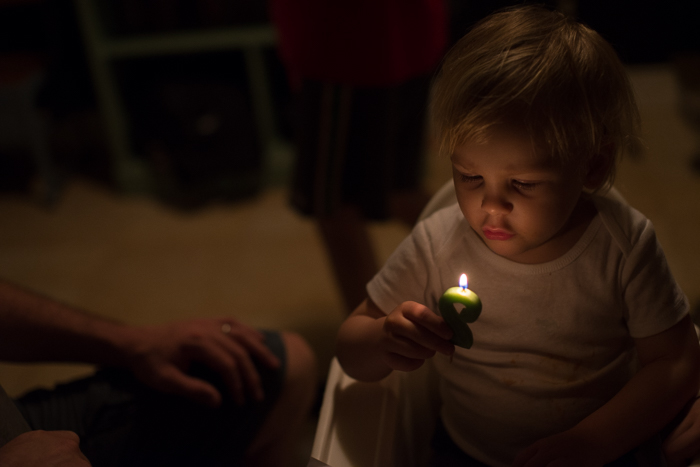 Job turned two last week!  We celebrated slowly over a couple of days because we are all recovering (some more quickly than others) from an illness.  I meant for the main celebration to be on Saturday, though that was two days past his actual birthday.  I planned on baked apples with caramel sauce and Job’s gifts in a pile on the table in our decorated kitchen.  In reality, we didn’t decorate, but the floor was clean (thanks to my older boys).  The only gifts left to give were a few board books that I wrapped that evening, along with his gift from Larkspur.  The caramel apples were vetoed in favor of apple cake (not terrible photogenic, but delicious) with caramel sauce (recipe from Cooking from Quilt Country

–That cookbook is full of amazing dessert recipes!)  Job rejected his birthday crown, but loved the hat I knit him to match Silas.’  I added a pom-pom that Keats made, thinking that Job would like that and it would help the boys tell their hats apart.  It ended up smaller than I imagined, and I didn’t fasten it on very well, so it’s kind of a sad pom-pom, but Job likes it anyway.

I had a hard time deciding on gifts, because really, Job doesn’t need anything.  I finally settled on a plastic t-Ball set

, not my typical style, but something I knew he would really like (and he does!)  His big gift was a swing.  I looked at all the pretty wooden ones available, but ended up settling on a playground type bucket swing

, and I am really happy with it.  I think it will last for years, and Job loves it.  I think his favorite gift was probably the little bag of homemade crayons that Larkspur planned for and worked on for days, actually weeks, as she was interrupted by our trip to New Mexico.  He likes to take all the crayons out of the bag and look at them, and then put them back inside.  He has done a bit of coloring with them too.  Beatrix and Silas wanted to make him watercolor birthday cards, but I think they forgot the card part.  Job didn’t mind, he was just happy that he was able to come behind them and do some painting himself.

Our last copy of Goodnight Moon went missing a year or so ago, probably around the time that Silas tired of it.  That books gets so worn, that I have replaced it multiple times.  Now it’s Job’s turn to ask for it every day, and probably more than once.  I don’t mind.  As Larkspur says, it’s the coziest book ever.  I was thinking about the truth in that, despite the fact that an actual room done up in those colors would not be my definition of cozy!

(You can find a list of our favorite board books here.  We tend to just keep re-reading and occasionally re-buying the same ones year after year.)