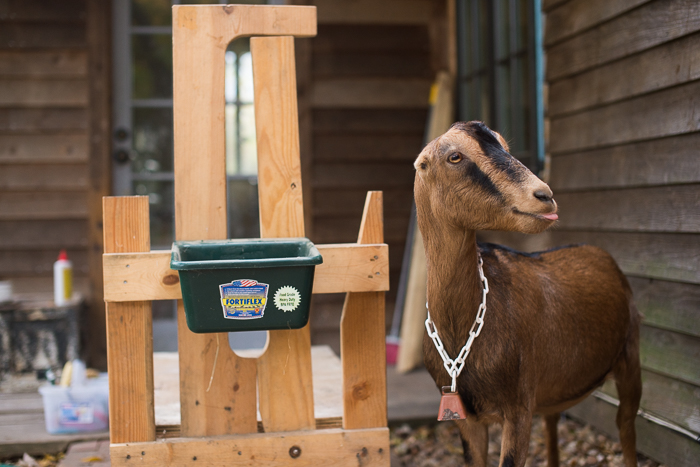 Last weekend we had a hoof trimming day, a wee bit overdue and prompted by an upcoming vet appointment, which is just terrible, I know.  Kind of like flossing before you go to the dentist.  But hoof trimming is just not fun, especially with our adult goats.  I’m quite sure that part of the problem is that we are still very new at this.  Of course, if we move to the every two week schedule that I think they need, surely the girls will become more cooperative. 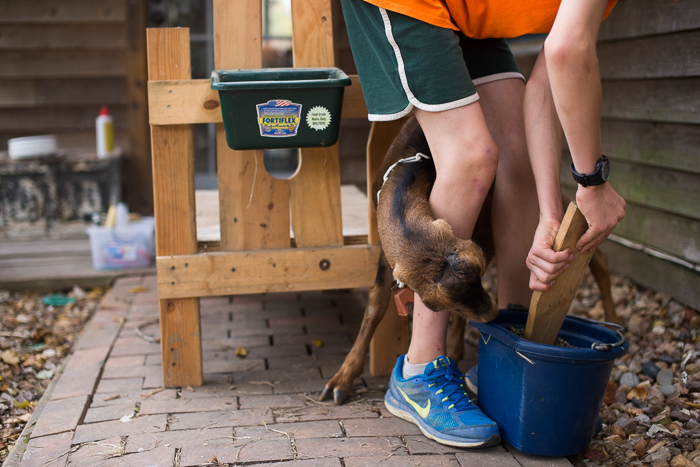 We give them a mixture of sunflower seeds and alfalfa pellets for distraction.  Though they aren’t supposed to have it until they are on the stand.  Clearly, we need help in the preparation area. 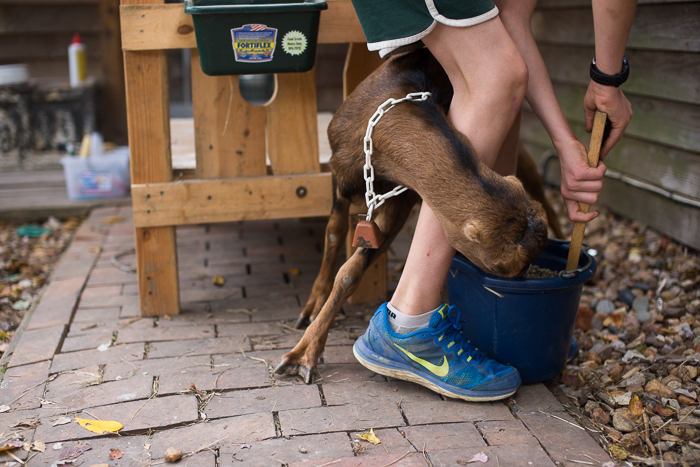 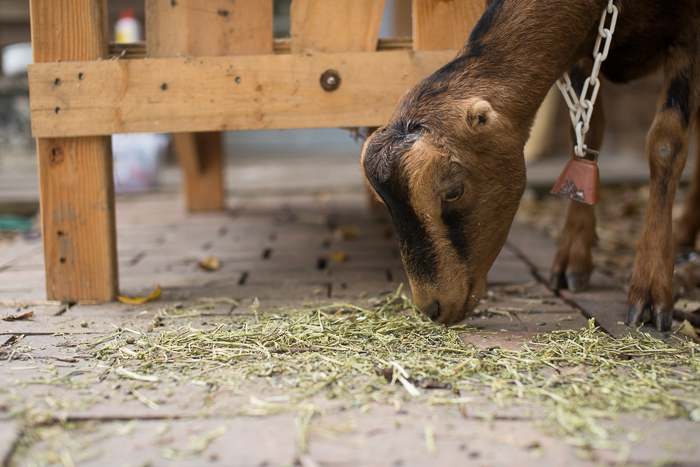 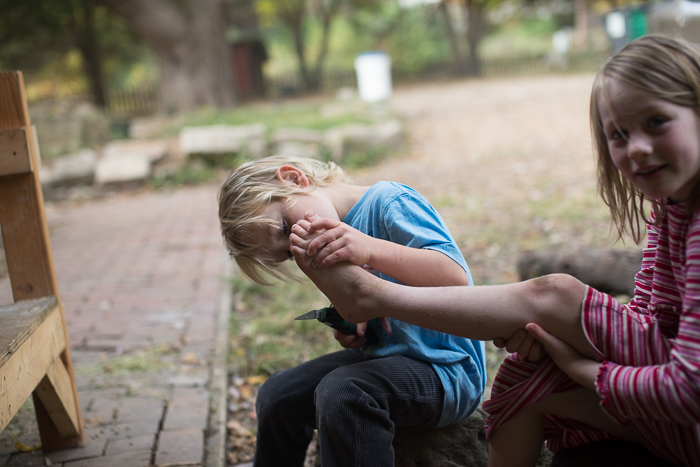 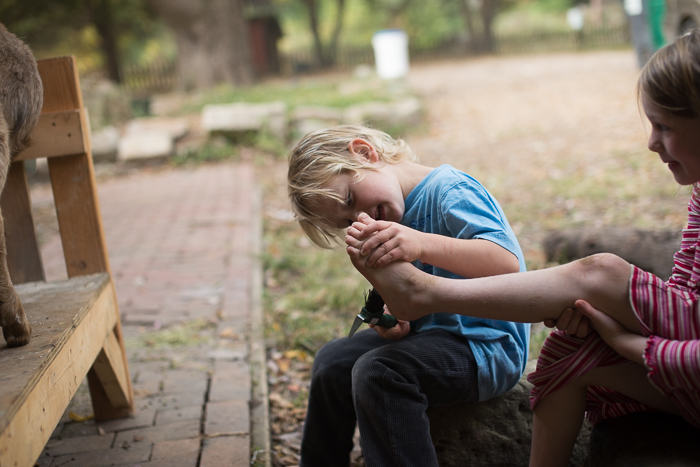 The little ones are learning all about hoof trimming as well.  They practice on each other. 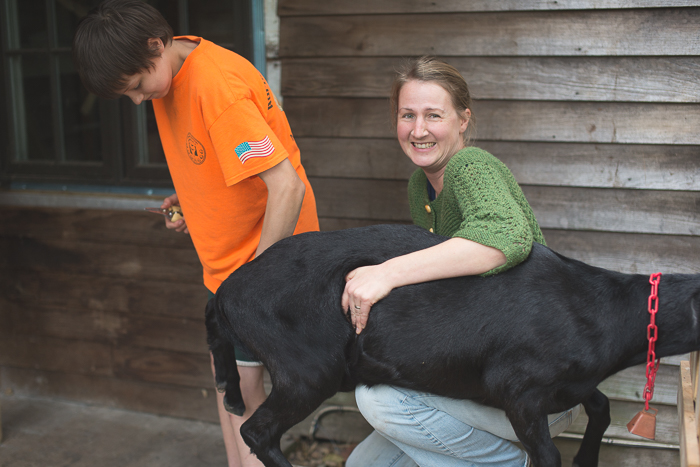 Out of all four, Agnes is the only one that is just awful to deal with.  She doesn’t mind putting ALL her weight on me, but she doesn’t want her hooves trimmed, no way.  She kicks.  When I do any of the trimming Keats watches me, telling me where I should trim more, so I said, “Okay!  You can be the official trimmer!”  I don’t mind.  Really!  He can be the full time trimmer while I am the goat perch.  (My kids don’t like this photo of me, saying I look weird.  That is my smile of agony.  She is heavy!) 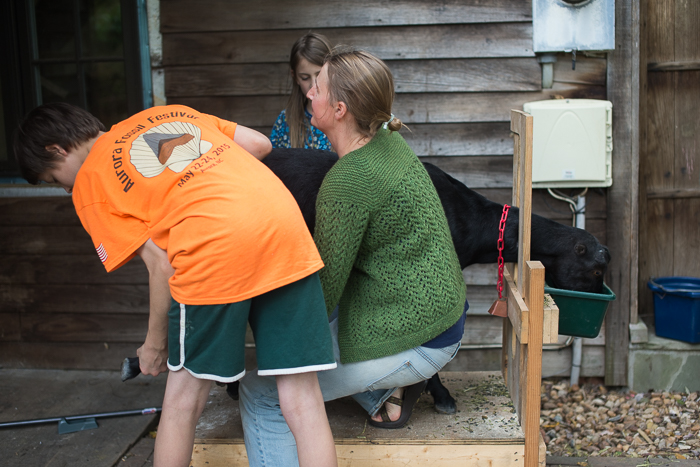 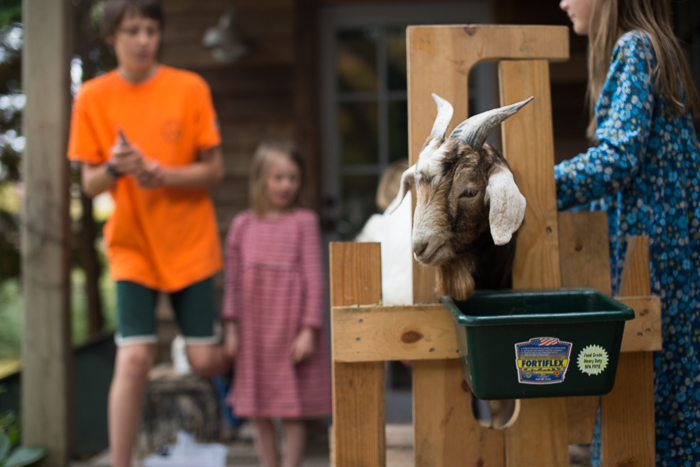 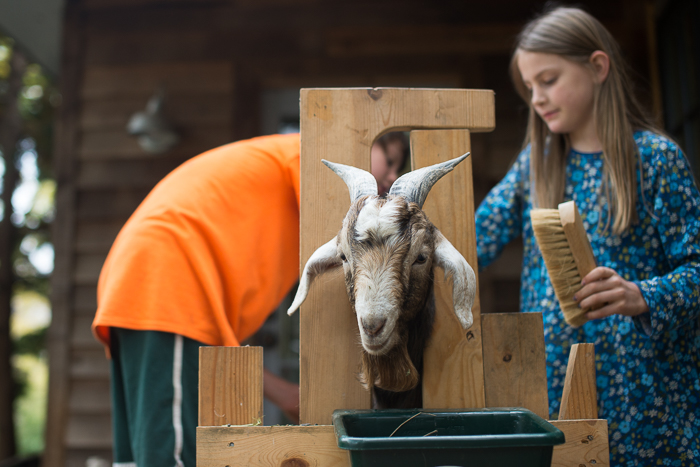 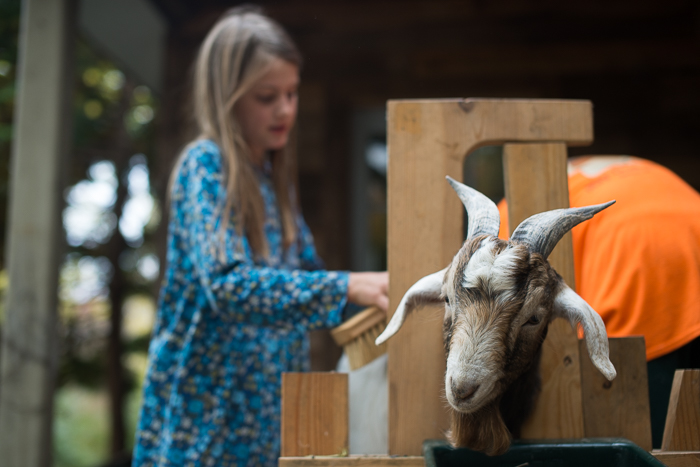 The baby boy goats (well, they are about seven months old now!) do behave themselves while they are trimmed.  They are our perfect little babies.  Little John ended up escaping his vet appointment this week, after all.  They rescheduled for next week because of rain.  The poor guy hasn’t been wethered yet due to an un-descended testicle (sorry if that’s tmi!)  None of us are looking forward to his surgery, which will probably prove to be pretty invasive in order to find the missing, ummmm… part.  He has gotten really stinky and is engaging in un gentleman-like behavior, so for that reason alone we will be relieved when all is said and done. 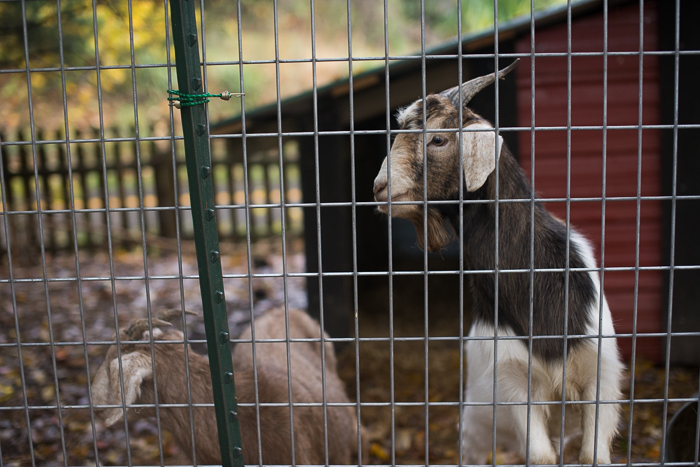 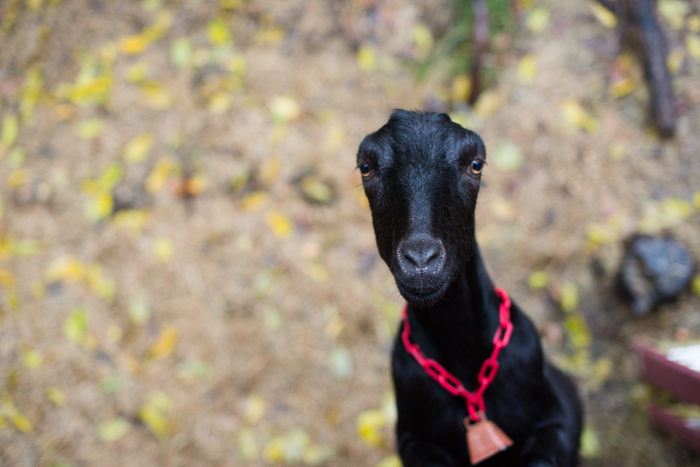 Despite the fact that the little boys are smaller and possibly cuter, I still prefer Agnes and Greta.  Naughty, stubborn animals amuse me.  Those that cause the most trouble are typically my favorites. 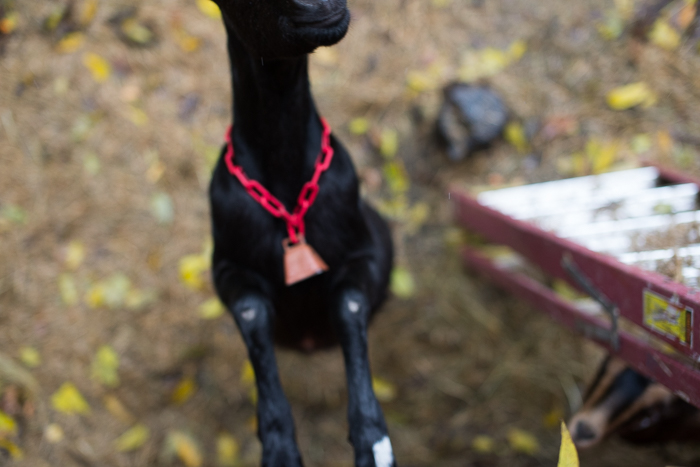 I took these photos from up in the loft where I was filling the girls’ feed buckets with their afternoon snack.  Agnes is always very focused on food, and though it was raining, she was jumping up on the side of the barn, anxious for me to hurry up (and stop taking her picture).  Greta, who usually joins her in this, didn’t like the rain, so she was hiding under the ladder, trying not to get wet! 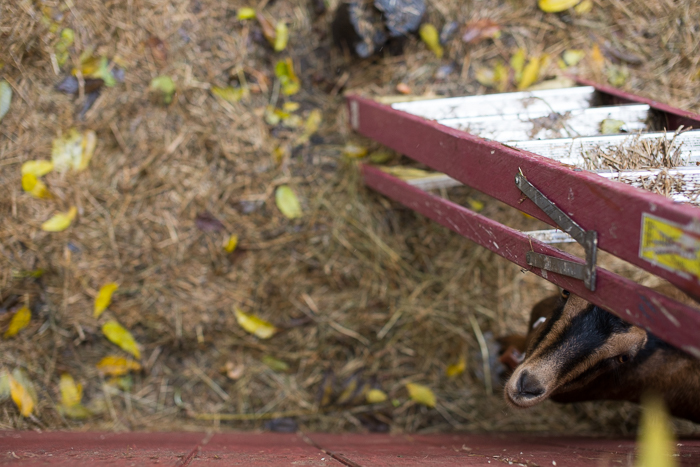 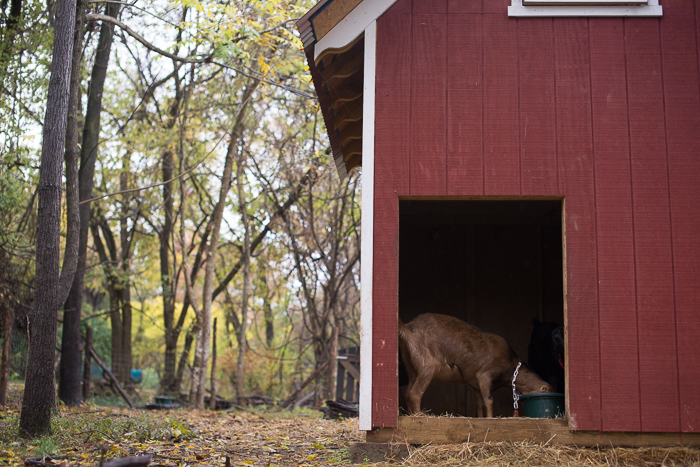 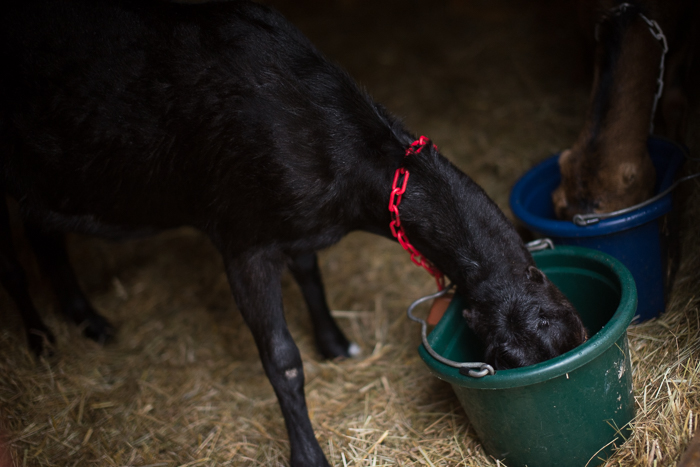 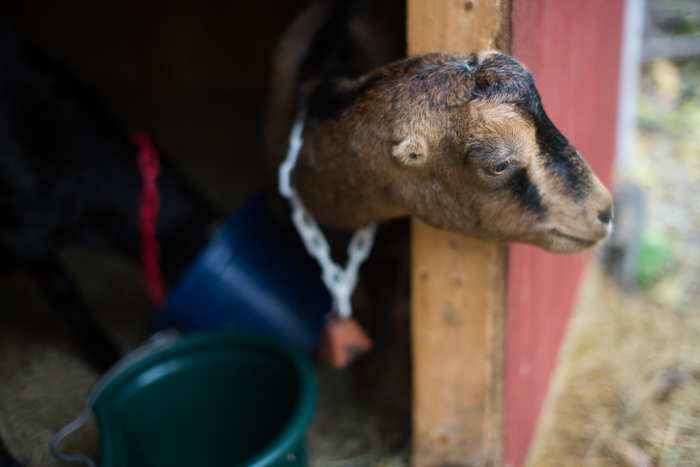 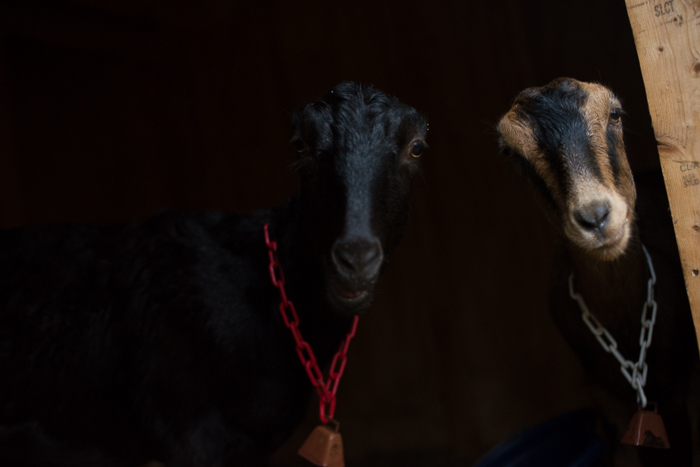 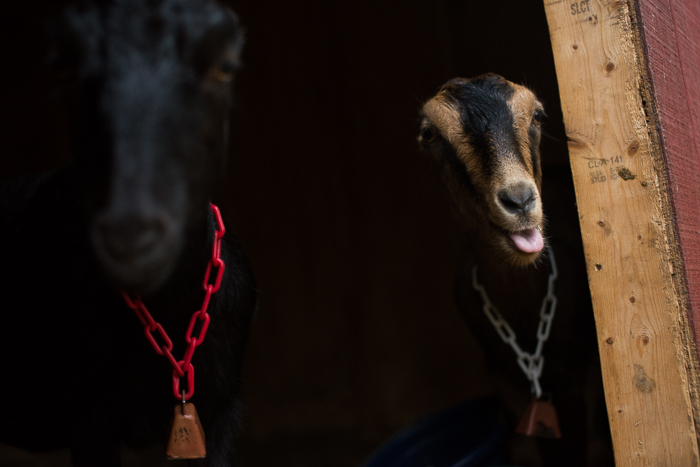 I’ll let you know how the vet appointment goes.  Our first farm call!