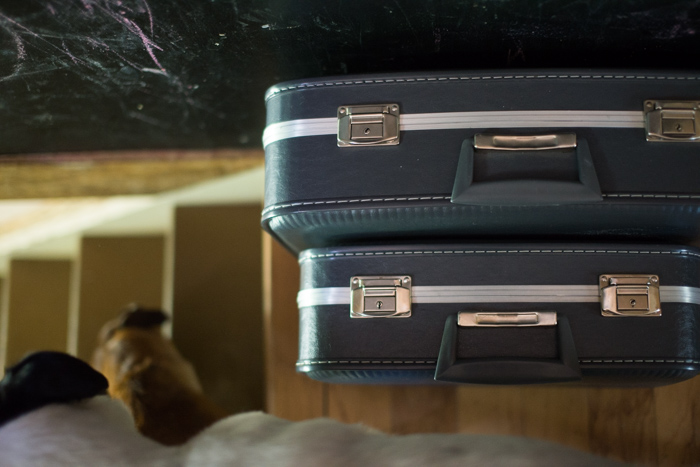 Thrifting is pretty hit or miss, and I rarely walk away with much when I run into the Goodwill store near our house.  But while Jonny and the kids were out of town, I had this amazing experience there, scoring so much good stuff that I just have to show you.

My girls use vintage suitcases to store their doll clothes, and both of theirs needed replacing.  It’s rare for me to come across one.  I spotted the larger one, in new condition on a shelf, and inside there was a second!

On a side note:  Trudy and Weasel were both ridiculous while we were home alone together.  They were so scared that they had to stay near me all the time.  They barked off and on all night long, spoiling my lovely plans for uninterrupted sleep.  One night, I took a big bowl of kitchen scraps out and called Trudy to walk over to our compost pile at the edge of the woods with me.  It was dark, and I didn’t want to go alone.  She wouldn’t take one step beyond my parked car.  I called her and called her but she stood her ground, absolutely refusing to budge.  “The woods are too scary!”

This little chair was five bucks.  It’s sitting at my desk now. 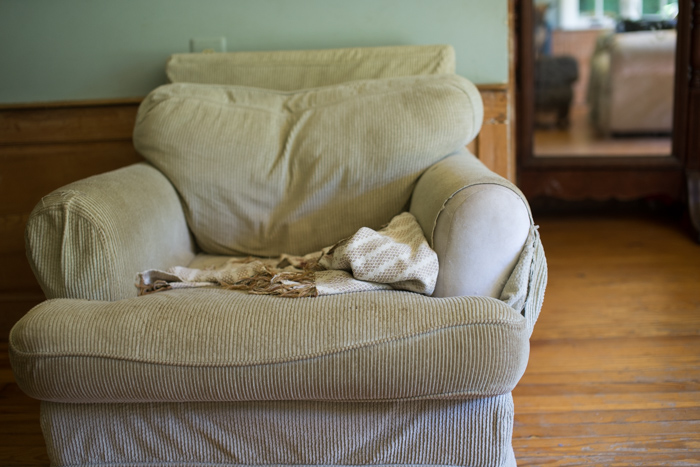 This is an old chair from Ikea that we’ve had for years.  It was discontinued so I can’t get a new slipcover for it.  It’s ripped in several places and I don’t think it’s worth trying to repair.  I can’t afford to buy a new one though, so I have kept it around.  I also have a hard time justifying new furniture purchases.  We (they) just ruin it. 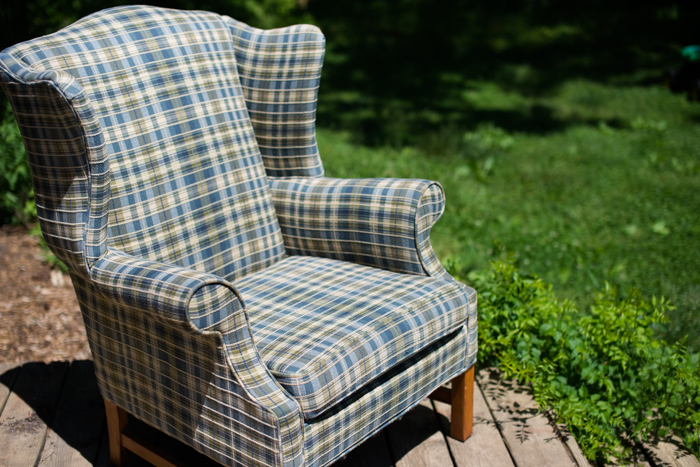 I spotted this chair, in nearly perfect condition at Goodwill and though it was cheap and maybe perfect for what I needed, I left it behind because I didn’t have a way to get it home.  I couldn’t stop thinking about it though, so I called my friend Eve and asked for help.  She totally dropped what she was doing to meet me back at the Goodwill in her big vehicle and hauled it home for me.  I cleaned it on the back porch with this handy little deep cleaner

(so necessary when you live in the country with a bunch of kids and not everything is slip-covered!) though it was hardly dirty at all. 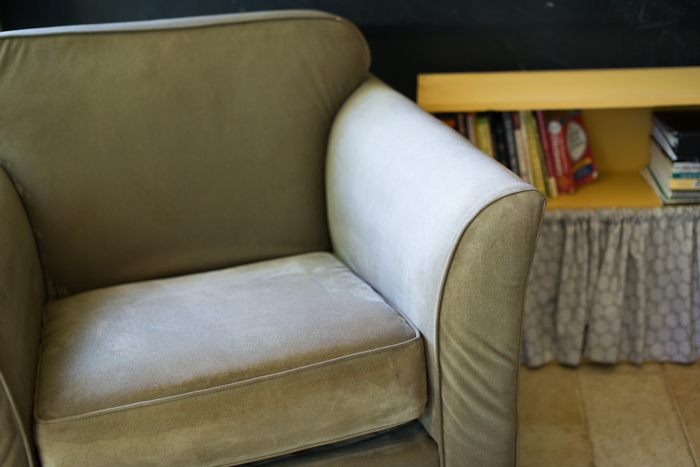 While I’m talking chairs:  I also deep cleaned this chair that we already had, in preparation to PAINT IT!  Yes, I painted upholstered furniture!  This chair is covered in some sort of micro-fiber and has a little bit of a nap.  It used to be a light olive green, but we turned it brown.  I should have taken a photo of it before I cleaned it, so you could see how nasty it looked.   I read lots of tutorials like this one, before getting started. 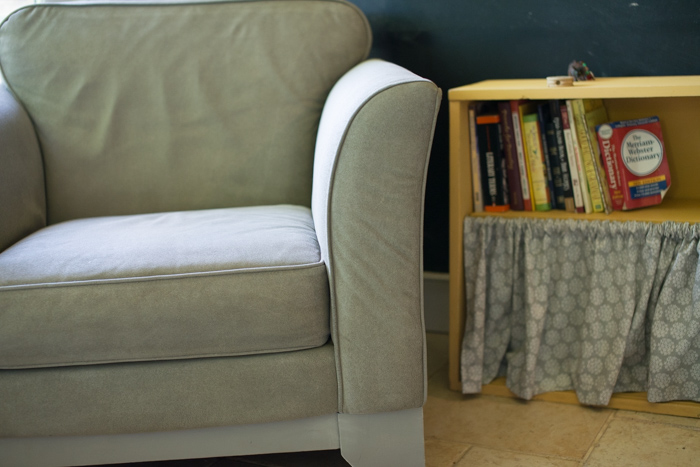 This is after the paint. 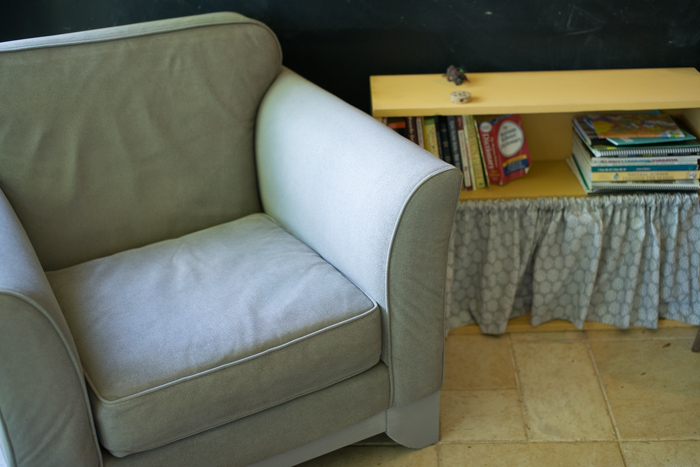 The change isn’t drastic in the photos since I chose a basic gray, but the paint made a huge difference, and I am so glad I did it!  (I used Annie Sloan chalk paint in French Linen.)  Also, the yellow shelf got kicked out and replaced by Sarah’s green hutch (last photo in this post) and this chair got moved to the living room next to Silas new bookshelf (also seen in this post.) 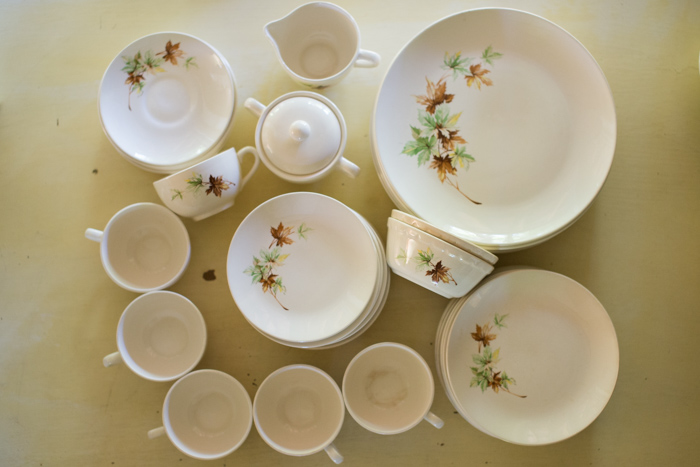 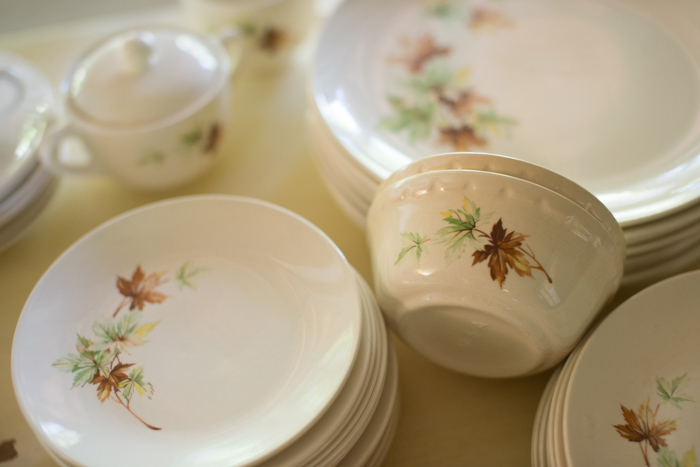 Finally, new dishes to break!  So far though, they are all still intact.  I love these so much!  We are using them all except the teacups and saucers which I put up high to bring down for special tea parties.