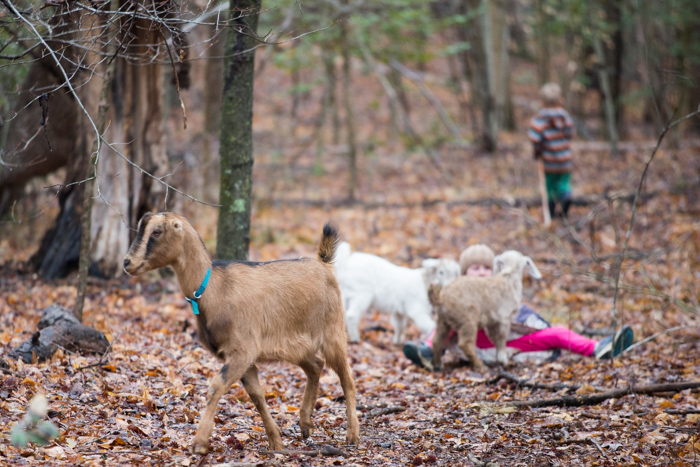 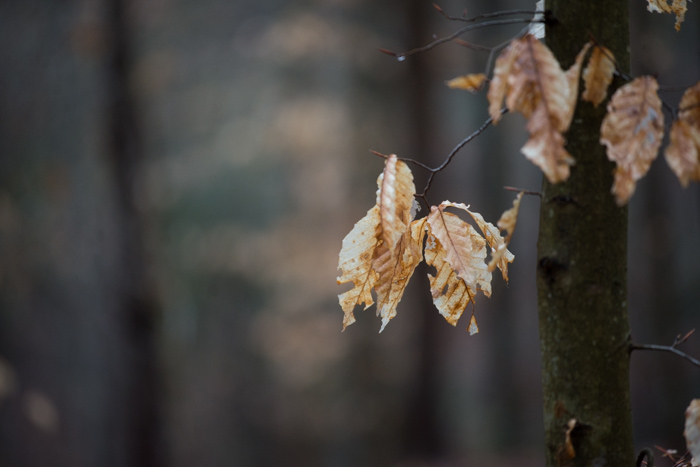 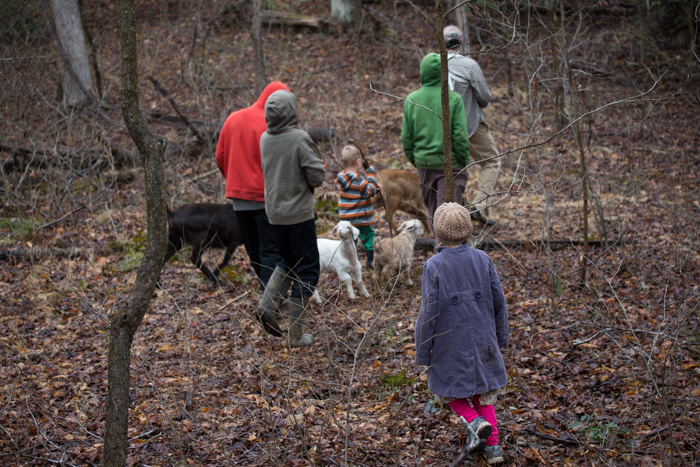 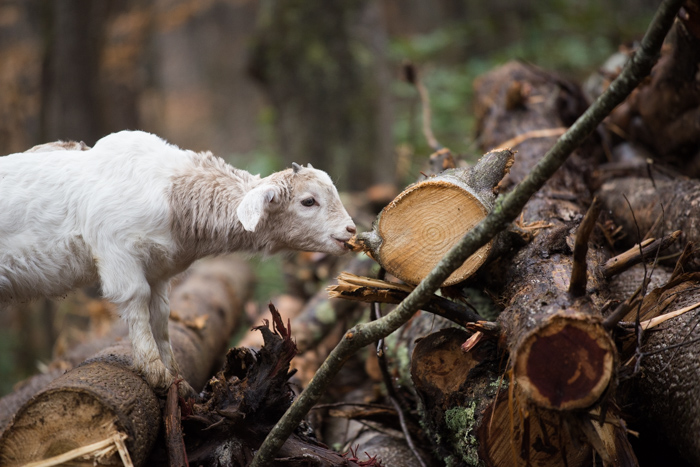 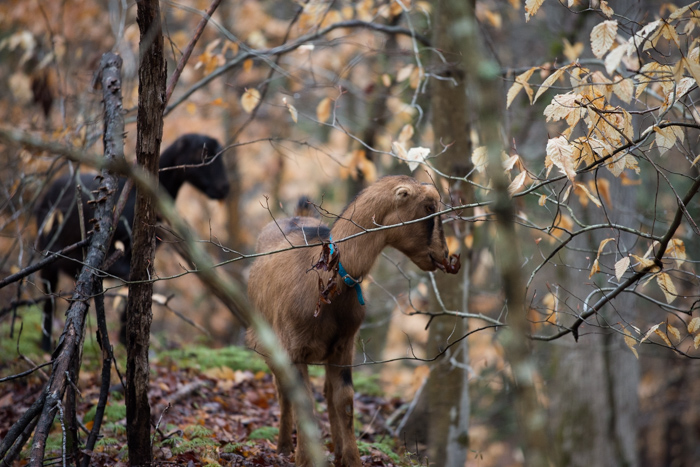 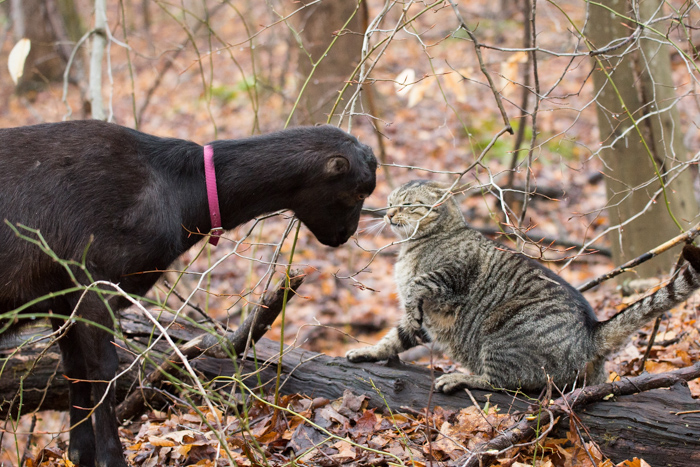 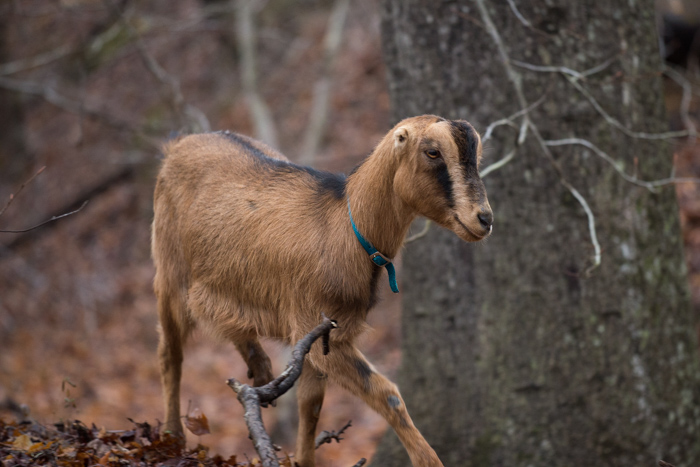 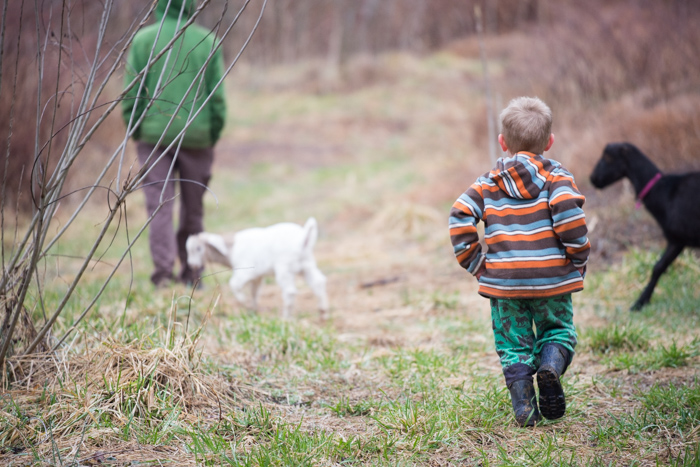 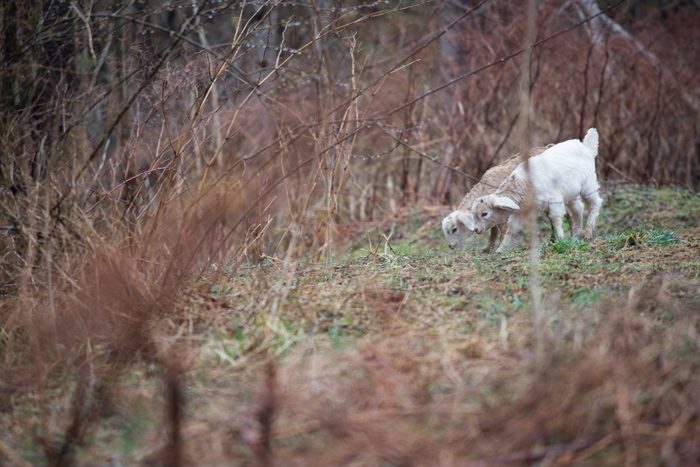 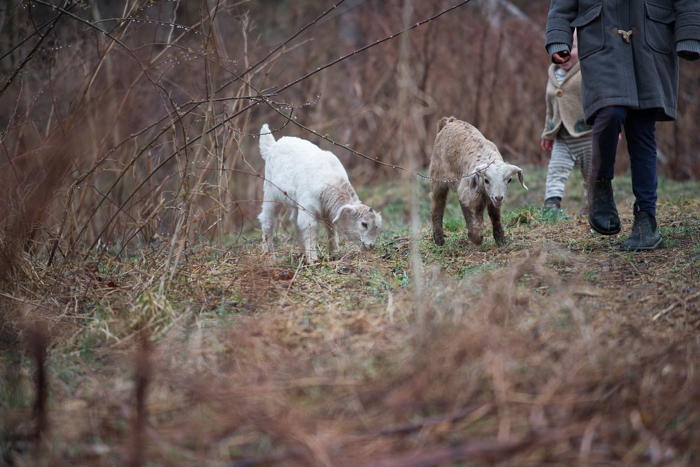 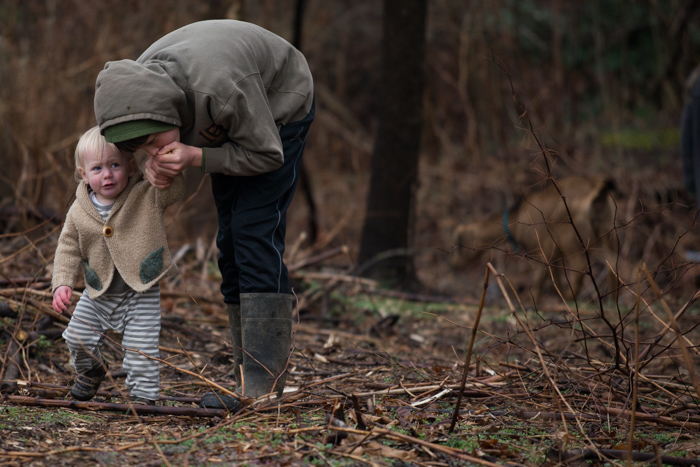 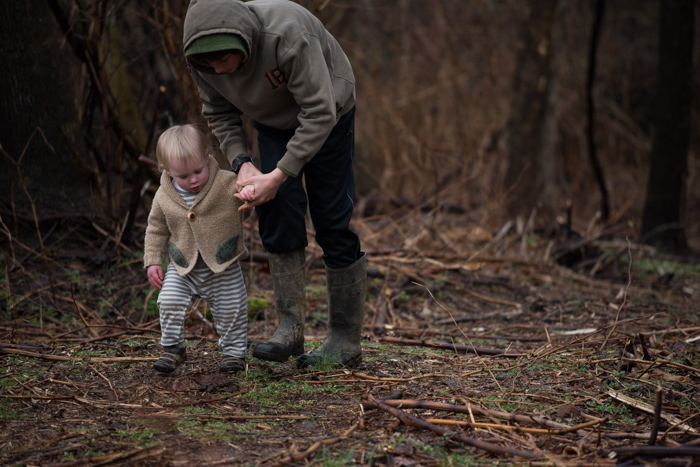 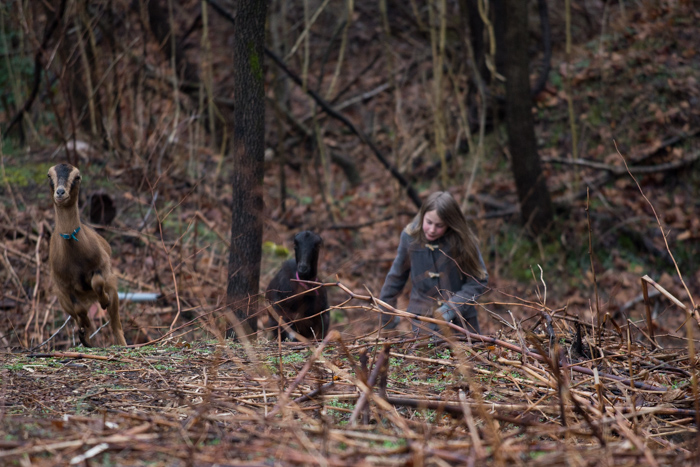 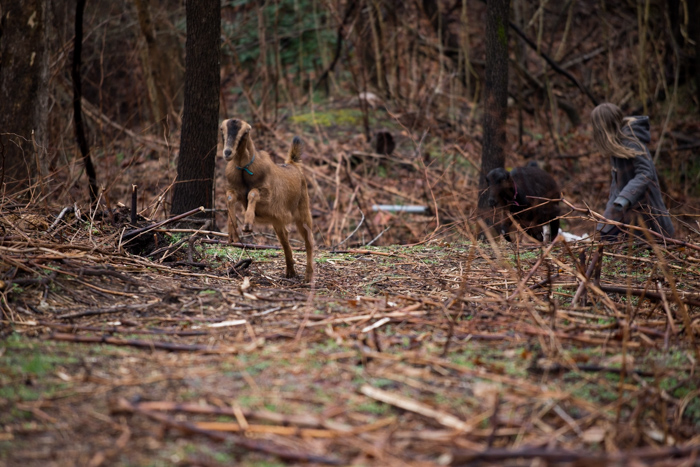 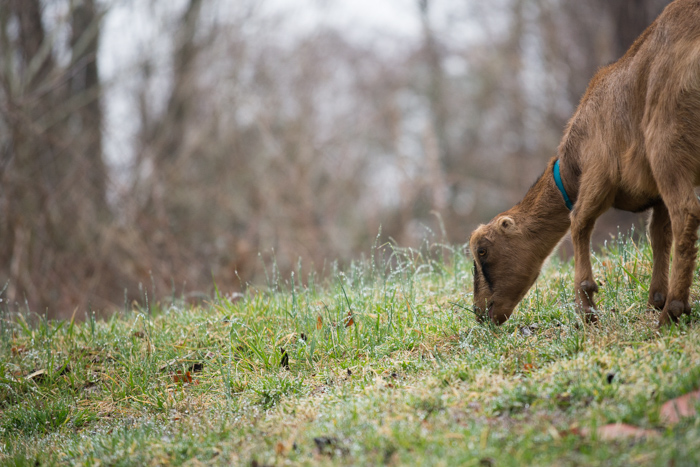 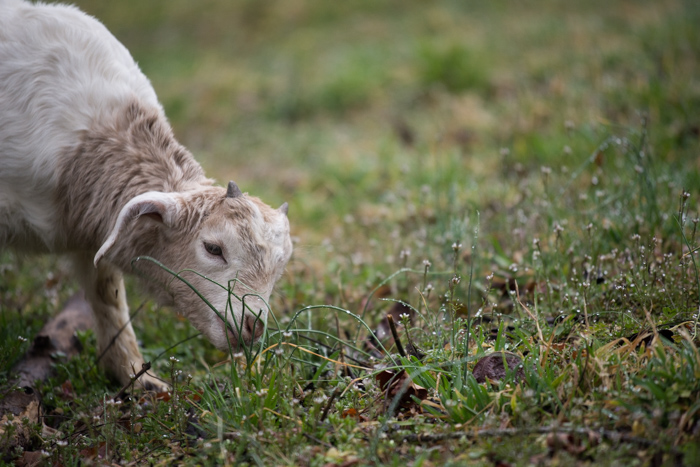 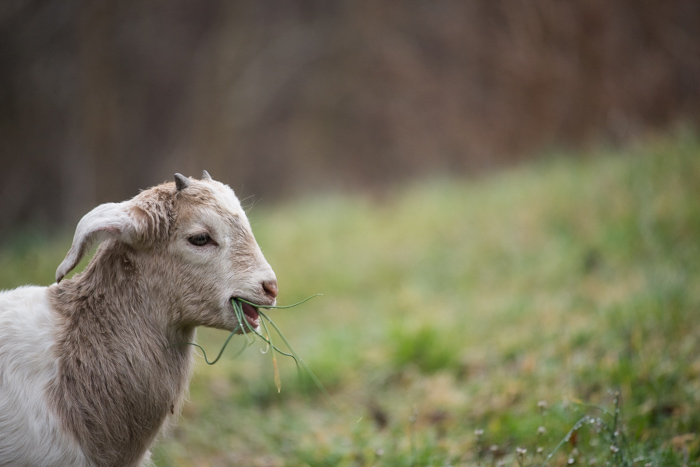 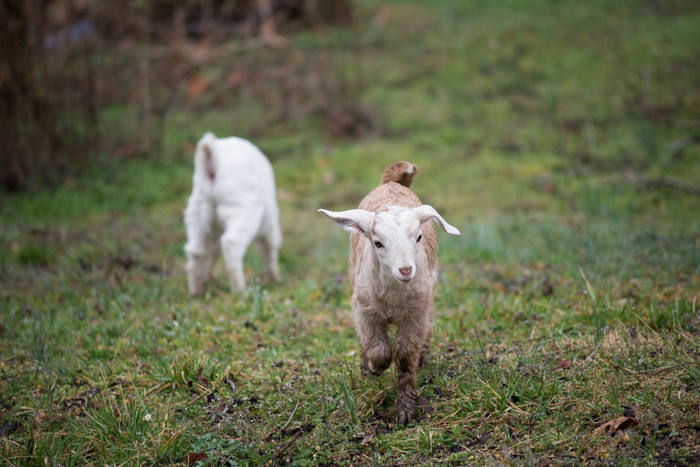 We didn’t mean to buy dairy goats.  Honestly, we hadn’t even considered it.

Our plan was to raise a couple of baby goats, wethers-to-be, with the hopes that they would help us maintain some of our property.  The more we read about goats, the more we started thinking that dairy goats might be just the thing for us.  But not really, we weren’t really going to get dairy goats.  It was just fun to talk about it and pretend.  I started reading all about the most popular breeds, just out of curiosity of course.  Based on pictures alone, I knew I didn’t want those funny looking goats that appeared to be virtually earless (LaManchas).  But as I continued to research, and moved from photographs to actual words, I decided that hypothetically speaking, were I to acquire some dairy goats, I would want those funny looking LaManchas.  They just kept being mentioned as sweet, quiet, curious.  Someone wrote that once you had LaManchas, you would always want LaManchas.  They are also the only breed of dairy goat to have been developed in the U.S.  Since I wasn’t going to get any to begin with, it seemed safe to deem them my desired breed.  I thought they might be a nice antidote to the loud mouthed Nubian cross babies we were already planning to bring home.

We ended up bringing home the dairy goats before the babies.  It all started with a Craigslist ad.  There was no photo, just a description.  I called and spoke with a teenage girl who was selling a couple of almost one year old LaMancha doelings.  She had raised them from babies, but didn’t have enough time to devote to them anymore.  She emailed me a couple of cell phone pictures and we soon came up with a plan for us to drive out and meet them.

We ended up driving two counties over to meet the girls on Ash Wednesday.  I didn’t think we would actually bring them home considering that we didn’t really have anywhere to put them besides the chicken coop.  I thought we’d be home in plenty of time for the evening Mass.  We took the front seat out of the van and squeezed all the kids in the back two rows in order to bring a large dog crate, just in case.  We stopped at the ATM for cash, just in case.  I could hardly sit still and practically bounced up and down on my seat the entire way there.  The closer we got the more hyper I became.  Jonny just laughed at me.

We arrived at our destination and pulled in.  We could see the two girls in a small nearby enclosure.  They had been living in this temporary pen for many months, and while their owner had meant for them to have something larger and more permanent, it hadn’t happened yet.  And now, with college looming, she was just trying to find them another home.

Jonny and I told the kids to all stay in their seats so we wouldn’t frighten the goats with a family stampede.  As we approached, both girls walked right up to the edge of the pen to meet us, friendly and curious.  They seemed huge to me and I was struck with a small wave of panic at the thought of bringing them home.  Suddenly, adding goats to our life seemed very intimidating.  We waved our kids over and visited with the goats for a few minutes before heading to our next stop.  There happened to be a nearby LaMancha farm and the owner of the two doelings had arranged for us to visit, to speak with someone with more experience with LaManchas and dairy goats in general.  When we arrived, I was the first to enter the main barn and spend some time with the adult does.  Some of them were huge, and most were really friendly, coming right up to get attention.  I didn’t really know what to think, I was kind of thrilled and kind of freaked out.  This farmer also had lots of LaMancha babies and they were so adorable that I thought that Jonny might want to get a couple of them instead of the big girls.  I also thought that he might decide against the whole scene, which would have been okay with me because I was totally chickening out.

After our visit at the farm we headed back to the home of the two doelings we had originally driven out to meet.  I was prepared for Jonny to say that we should just go home without any goats, and I would have been okay with that, I think.  The kids were all in the backseat shouting and begging to get the goats.  We parked and got out, instructing them once again to stay in the car so we could talk without their super loud input.  I looked up at Jonny and said, “So what do you think?  What do you want to do?”  He replied, “I kind of think we need to rescue them.”

Okay, then!  I exchanged a fat wad of cash for registration papers, and mere minutes later there were two goats in my van on Ash Wednesday.  We went to Tractor Supply instead of Mass.  I don’t know what to say about that.

Actually, everyone was starving so Jonny dropped me off to buy the goat supplies while he took the kids to get something to eat.  I walked in that store and my mind went blank.  Everything I’d been reading in the goat books left me.  All I could think was that there were two big goats in our van and I had no idea what to do with them.  After pushing a cart up and down the aisles for awhile, I finally approached an employee, feeling like the most irresponsible goat owner there ever was, and I was only half an hour or so into it.  I stuttered something really clueless sounding along the lines of, “I have these two goats in my van, and I’m not sure what to buy for them.”  Rather than treating me with scorn for obviously being the most irresponsible, reckless, bad all around goat owner there ever was, he responded with something like, “You’ve got goats in your van?  That’s great!  How cool!”  His enthusiasm was contagious and helped me to calm down a little.  I managed to put the proper items into my cart and buy them.  Major feat.

And it is just getting better and better every day.  I completely adore these goats.  I feel a little loony in that I’m having a sort of  “where have you been all my life?” experience with the goats in general.  Every day we take them (the big girls and the baby boys) on a long walk.  We call them Goat Walks.  Usually, the whole family goes along, one big herd.  It’s the best part of my day.  We walk with them all over the property, and they alternate between munching onion grass and frolicking around the way that goats do, making us all laugh at their antics.

Despite the fact that the barn and fencing isn’t ready for them yet (Jonny’s broken collar bone slowed us down), the girls are doing really well.  The chicken coop and hen house are a big step-up comfort and size-wise from what they were living in before.  I can’t wait until we can move them into their new home (soon, I think!) but in the meantime this is working.

Their names are Agnes (the black one) and Greta (the brown one).  Agnes is my favorite.  Greta is my other favorite.  The babies are cute too and of course I love them, but Agnes and Greta are my favorite favorites.