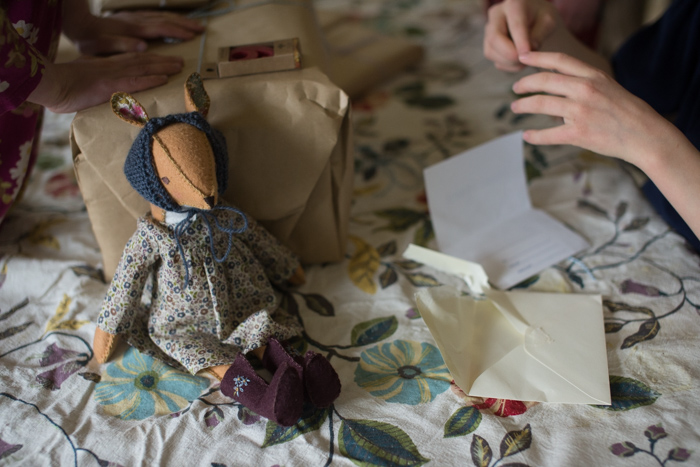 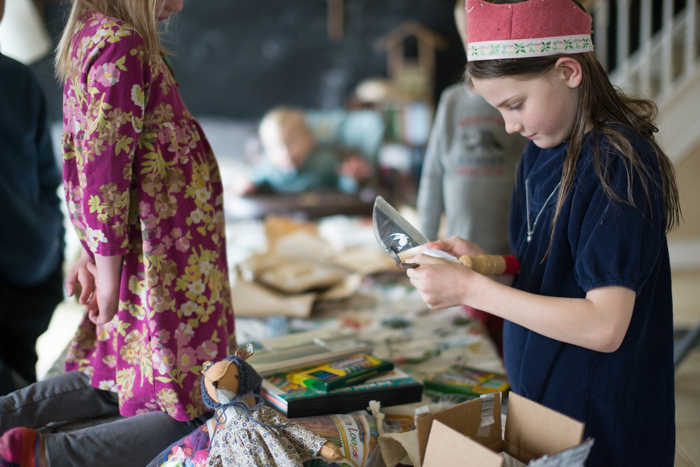 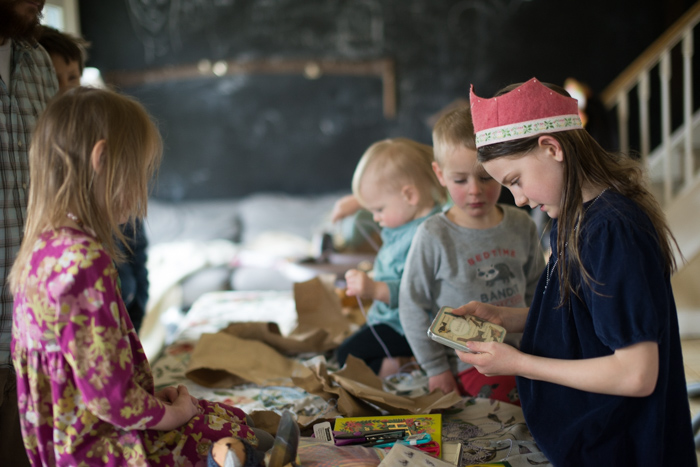 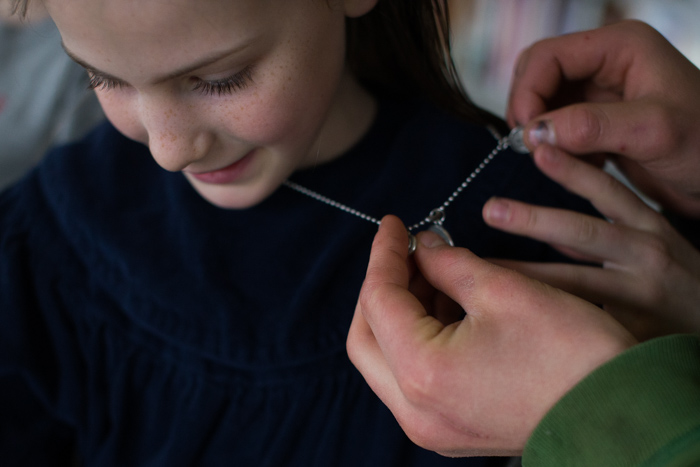 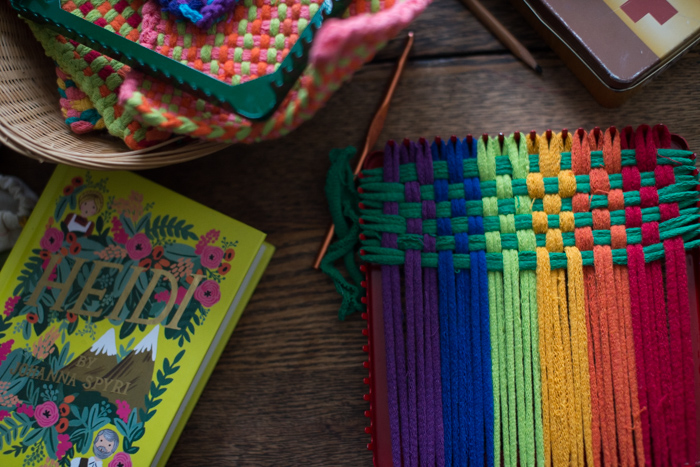 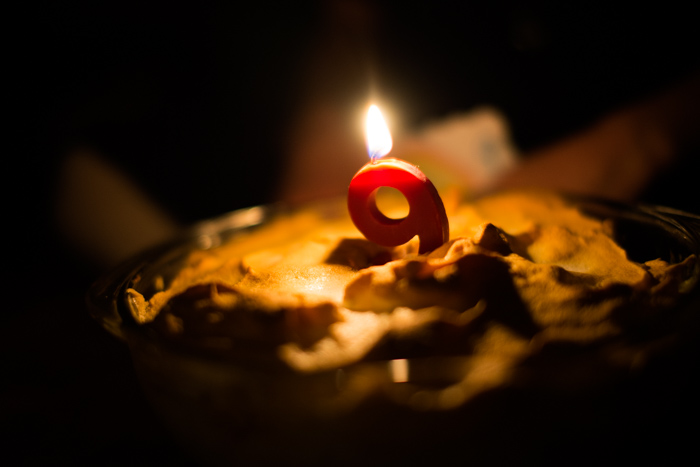 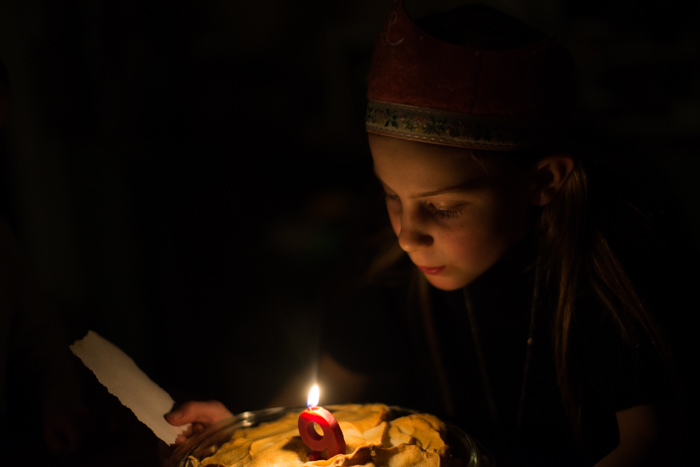 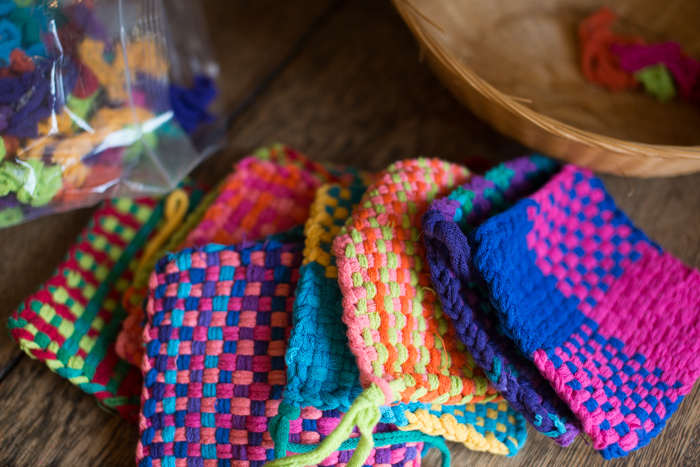 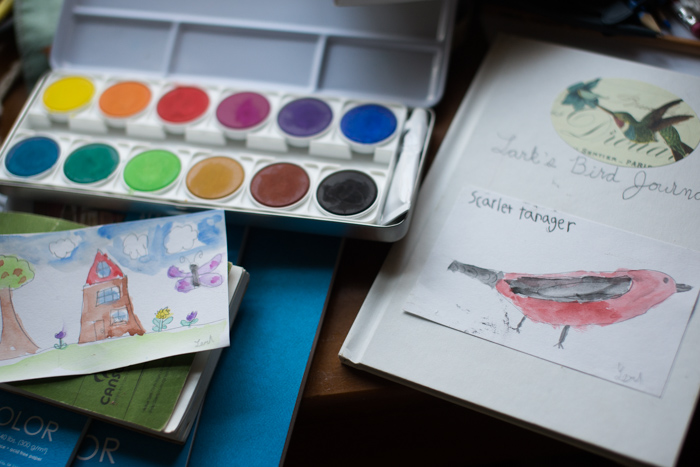 We celebrated Larkspur’s ninth birthday last week during our biggest snowstorm of the year.  As birthdays do in our house, the day revolved around food and of course, gifts.  Lark always wants a fruit salad, which isn’t that easy to pull off in early March.  I suggested a citrus salad, but she really wanted melons and begged me to buy them even though they aren’t in season and wouldn’t be the best.  The salad turned out just fine as did the rest of her requested foods, including her new tradition of banana pudding rather than a birthday cake.

I have sewn birthday dresses for several of the girls’ birthdays, and that has created an expectation there.  This year in the weeks leading up to Lark’s birthday I started going through my fabric stash and trying to decide what pattern to make but it was really causing me some anxiety.  I just don’t sew very often anymore, partly for lack of space and time, and the thought of sewing a dress from beginning to end was a little bit overwhelming to me.  Larkspur was also hoping that I would make her the Topsy Turvy doll from this book

, but the thought of that was stressing me out as well.  The bottom line for me is that crafting is only good when I am enjoying it and it is helping to relieve stress rather than create it.  Where I am at right now, the only craft that I find good for me on a regular basis is knitting.  Everything else seems to require too much mental power and prep work.  In an effort to simplify I came up with an alternate plan that I thought would still make Larkspur happy.  She’s been bugging me to make her Dandelion Doe softie ever since I bought the kit, many months ago.  I am a huge fan of kits (particularly Alicia’s, so pretty), more so now than ever.  They take much of the decision making and prep work out of a project and that can be very appealing at times.  Of course my brain is clearly not functioning at a high level right now because I managed to omit certain portions of the directions for this particular kit.  I knew something must be wrong when I ran out of floss for sewing the body when I was only halfway through it.  You’d think I would have remembered to only use two of the six strands of floss considering the fact that I have made two of these kits in the past.  Boy did my fingers hurt (for days) after sewing the whole thing with six strands (I used multiple shades of tan and it really worked out fine despite the pain.)  My plan was to downgrade the birthday dress to a skirt and have the colors match Dandelion’s dress.  I ran the skirt versus dress idea by Larkspur and she expressed concern that a skirt would really be too easy for me, and not quite worthy of a birthday!  Thank goodness that she was super excited with Dandelion (and surprised too!), because not only did she not get a birthday dress, there was no skirt either!  I just ran out of time.  I have promised to make her a First Holy Communion dress (what??) and I think that is why she let me off the hook.

Larkspur is very sweet, and really, she’s easy to please.  She likes lots of fun and artsy things, making the shopping part great fun.  My older boys are sooo specific and buying their gifts usually means Jonny hunting something down on Craigslist and going to pick it up.  No surprises.

So, I kind of went overboard with gifts for Lark this year.  I started stashing things months in advance and by the time her birthday rolled around, I had a little more than I meant to.

, I also bought Larkspur a set of nice watercolors, at her request.  She specifically wanted this set from Nova Natural.  She has been painting with them every day since her birthday.  I think these paints were her most expensive gift outside of the Dandelion Doe kit, but well worth the money.  She is taking her paintings so seriously now, and I know she is having a lot of fun.  She is especially interested in birds, so I pulled this book

on keeping a naturalist’s notebook off the shelf and she’s been using that to help guide her bird paintings.  I also bought her this beginner’s guide to eastern birds

, and we are really liking this little field guide!

I surprised Lark with a Saint Kateri necklace from this shop.  She has really fallen in love with this North American saint over the past year.  I also bought her, at her request, my favorite little garden hoe

.  (I don’t even know how many of those I have purchased for both myself and for gifts over the years.)  She is so excited about her garden this year.  I think maybe even more excited than I am about mine!

for her pot holder loom, and a copy of Heidi

, that I am actually planning to return despite it’s pretty cover. As I started reading the first chapter, I became concerned that it was an abridged version because I didn’t recognize it. A little research, and I realized it was just not the translation that I am used to. I really dislike this one, the language is just not beautiful. Can someone recommend a better one? I don’t remember what I had as a child.

I’m just so glad that she had a happy birthday and that she didn’t let the snow put a damper on all her garden plans. Well, I’m also grateful that Jonny waited until the next day to go break his collarbone.  He’s already feeling so much better, by the way.  We’re sorting things out and it’s really going to be okay.  Thanks for all your kind words.

Little Larkspur, nine years old already!  I still remember the day that we learned that we would have our first little girl….