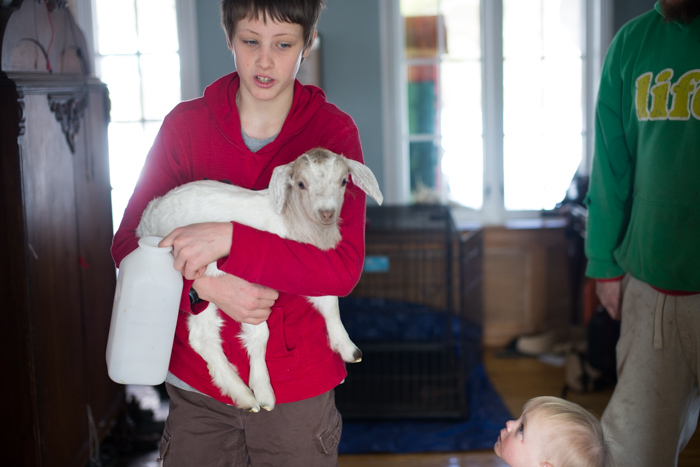 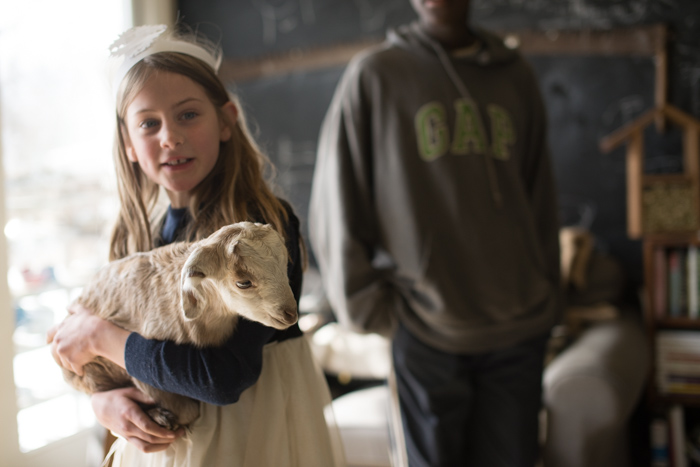 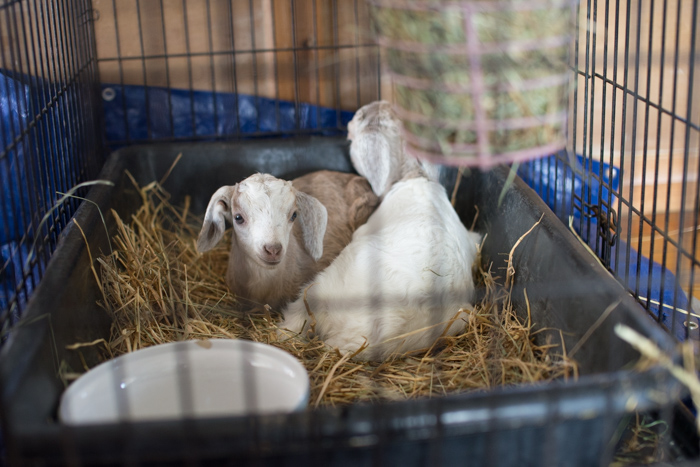 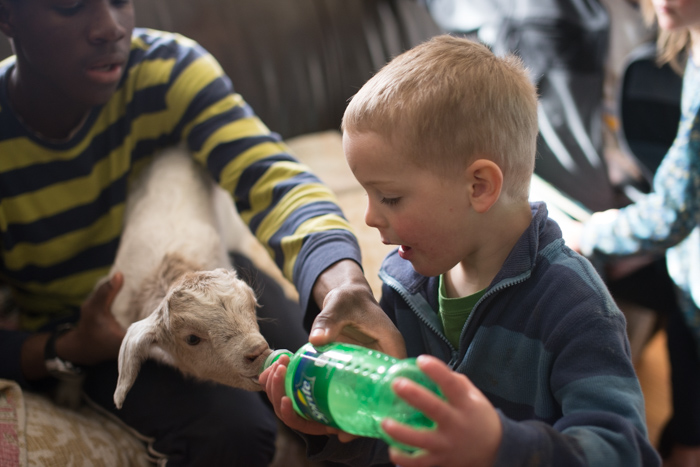 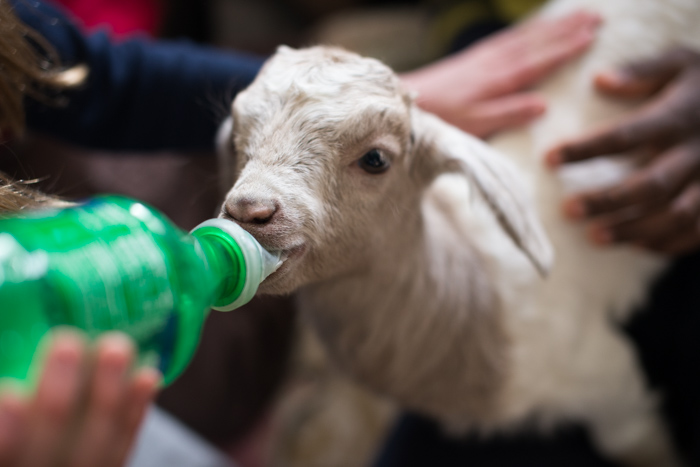 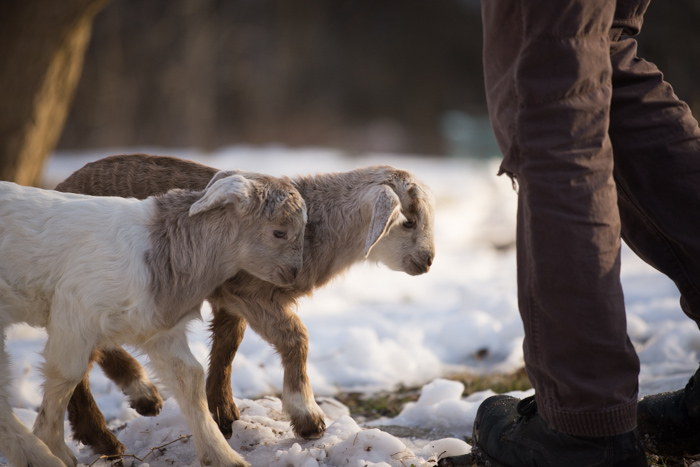 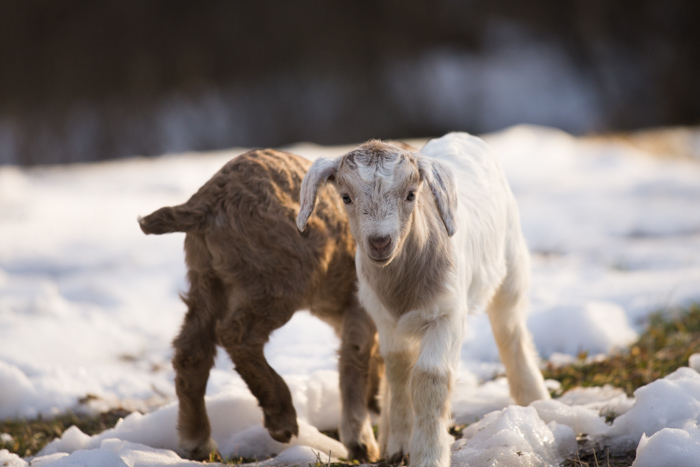 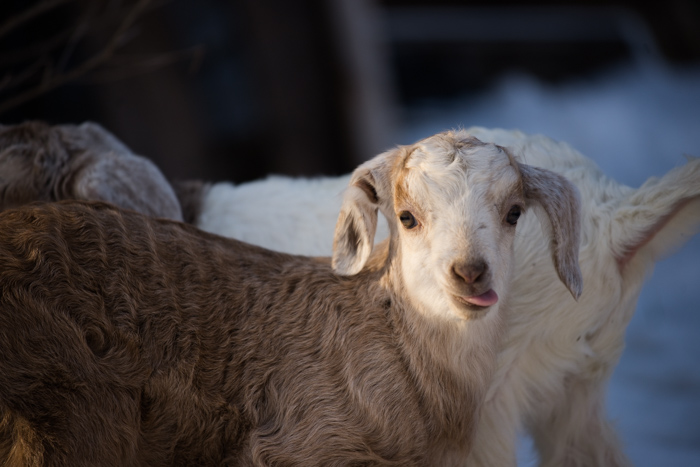 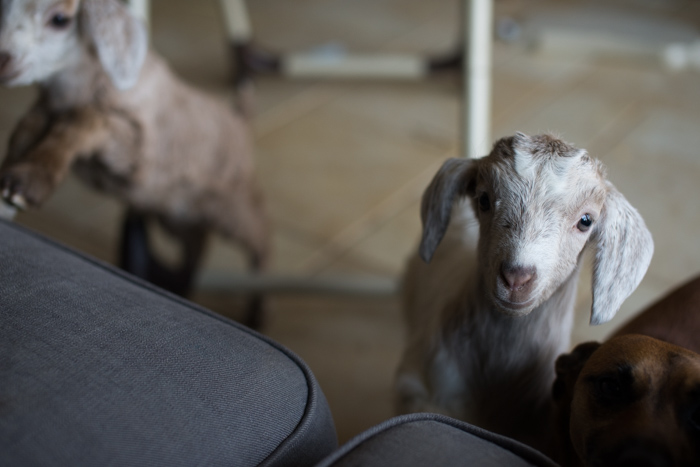 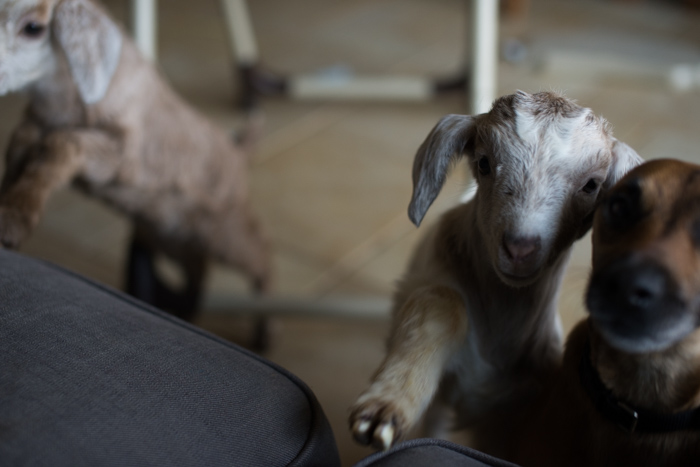 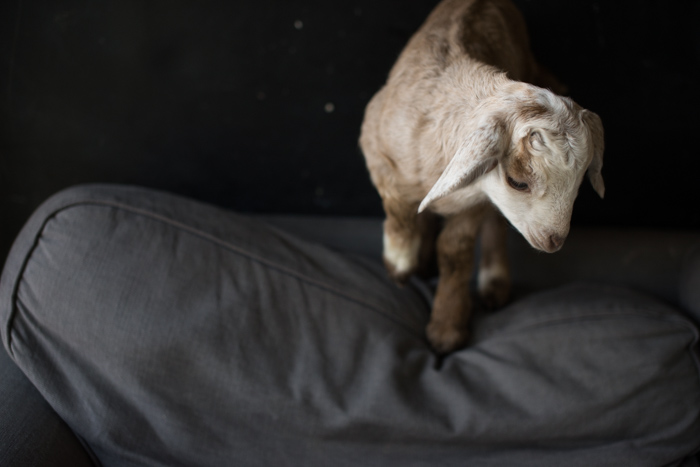 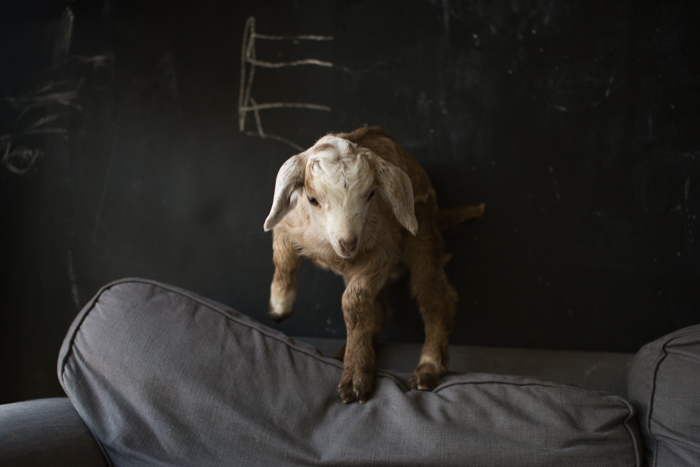 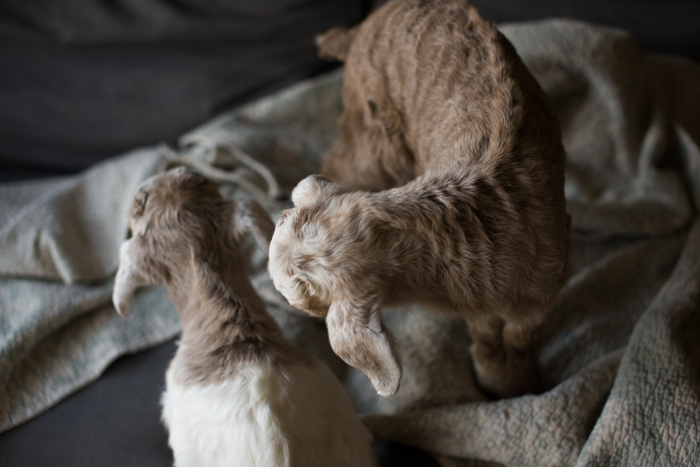 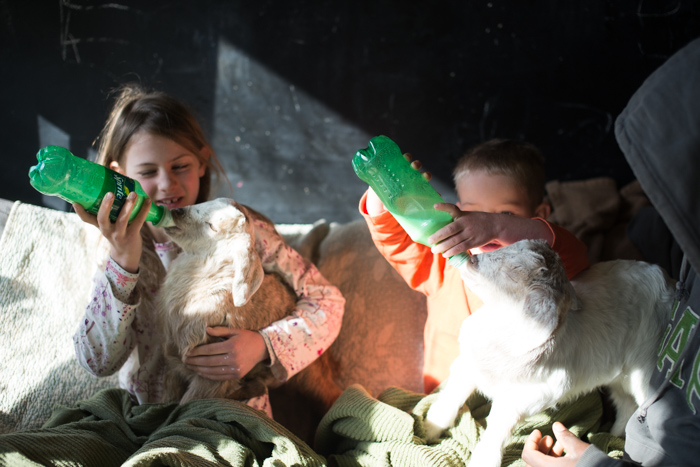 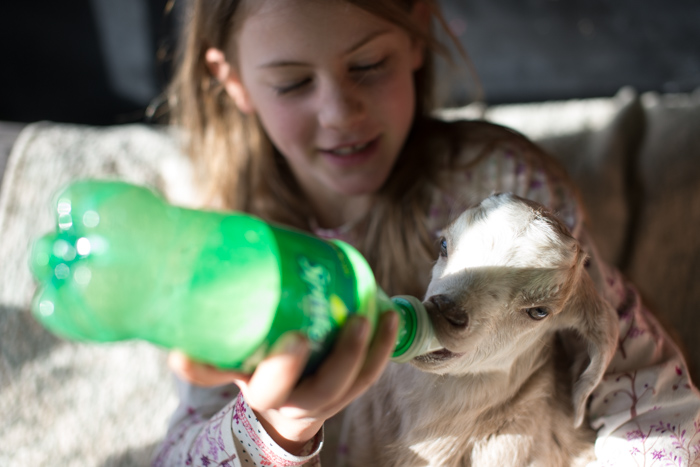 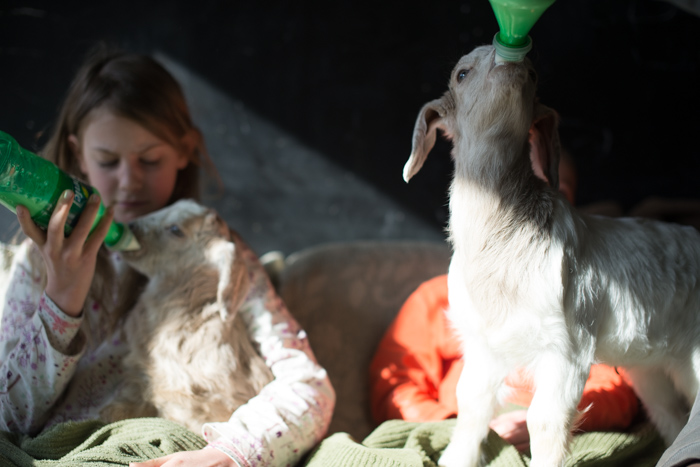 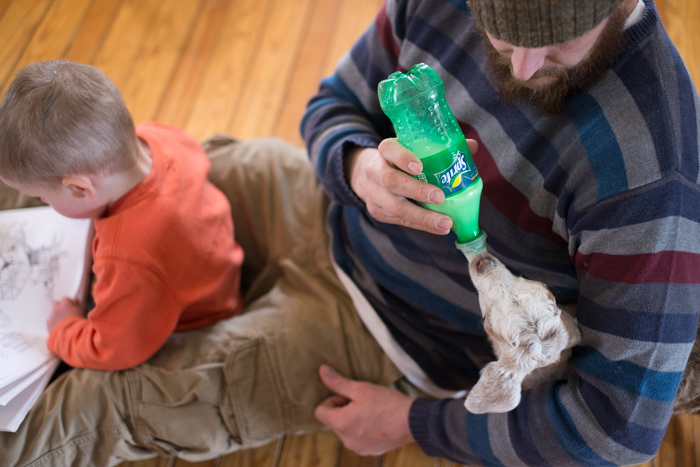 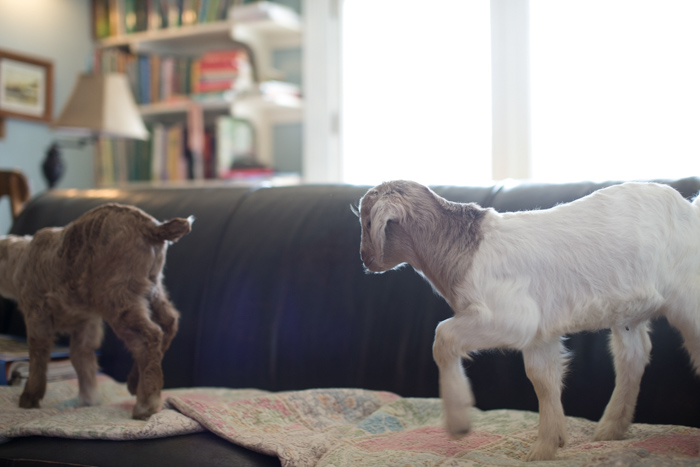 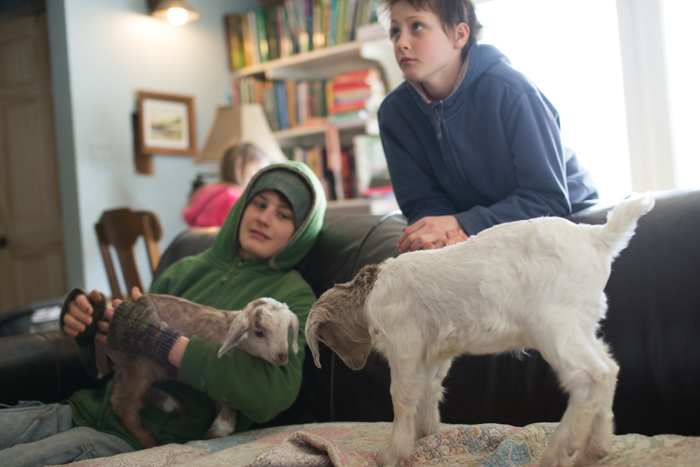 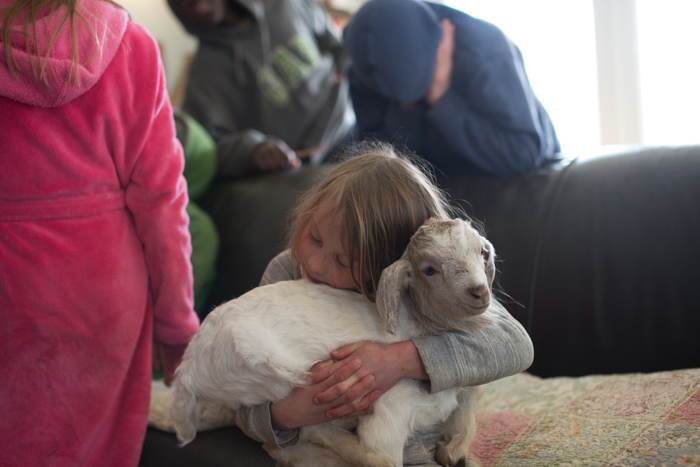 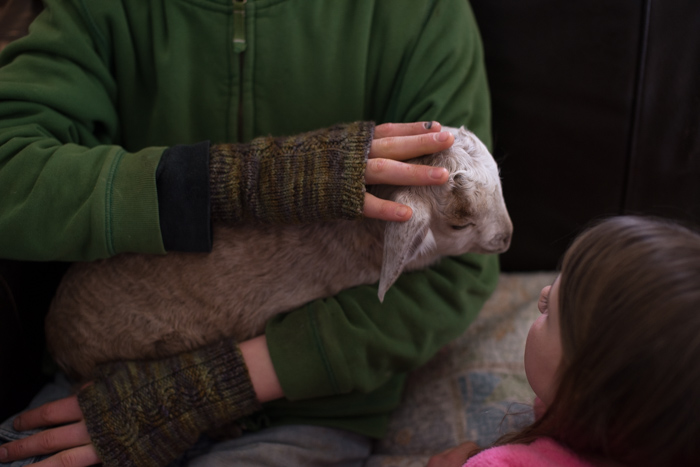 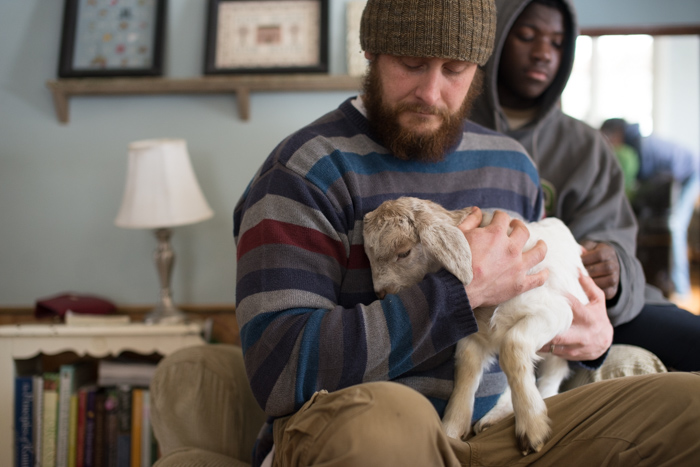 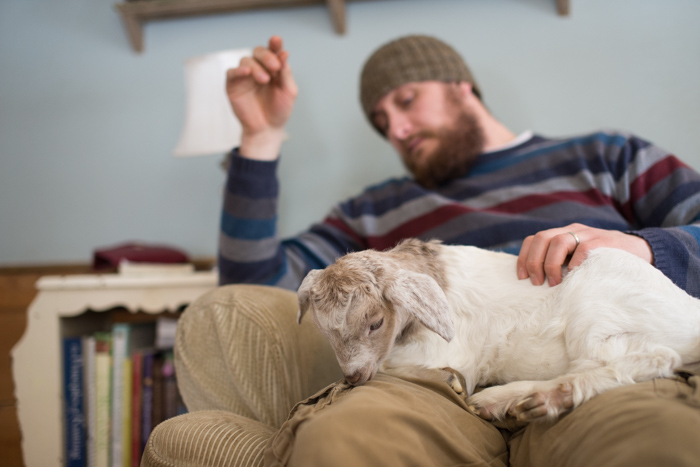 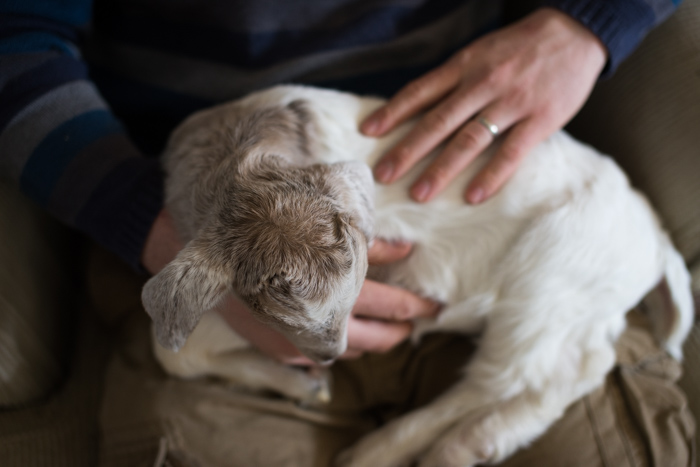 We used to wear clean clothes (most of the time).  We used to brush our hair (well, to be honest, some of us not so much).  Jonny and I used to be able to use the phrase, “Were you born in a barn?” without the offending child being able to look around at the straw strewn around the floor before replying, “Ummmmm, apparently, so.”

But then we brought home a couple of nubian alpine cross bucklings (because I know some of you will want to know their breed–and yes, they will soon become wethers, losing their ability to reproduce).  They are proving to be the ultimate distraction, and the reason behind the (more than usual) disheveled appearance of our family.

When these guys were born in all their cuteness at my friend Jaime’s farm a few weeks ago, she gently suggested that we might want them, and I quickly remembered that we needed a couple of goats to help us clear brush on our property.  We had briefly discussed the possibility last summer.  Jonny was on board from the start, and all of the kids, save Silas, are thrilled to have the goats.  Silas liked them at first, but now seems to view them as competition and is acting like he just got a new baby sibling.  I’m hoping that passes quickly, because he is making me crazy.  I’m doing my best to give him extra special attention, so he doesn’t feel upstaged (again.)  Thank goodness Job is too young to be worried about such things.  He just wants to hug the goaties.

The babies were with their mamas for their first two weeks and now we are bottle raising them.  Part of that equation involves Keats and I heading over to Jaime’s farm every morning so that he can help her milk.  We bring home the milk to feed the babies.  (For those of you who aren’t into goats, bottle raising is a very common practice for several reasons.  In our case, one of those is that we want these guys to be as friendly as possible.)  Four times a day, I warm milk on the stove to feed them.

Right now, the babies are sleeping in a large dog crate in our house at night, and we are trying to figure out daytime still.  My kids walk them around outdoors, playing shepherd, and we let them run around the house too, which feels a little bit nutsy.  We’ve discussed the possibility of diapering them, but goats in diapers, really?  Our short term plan is to move them outdoors into our former hen house and enclosed chicken run, but we need the weather to warm up a bit first.  Right now there is a snowstorm dumping more snow on us, so today there won’t be romps outside for the goatlings.  Seven human kids plus two goat kids getting stir crazy should be lots of fun!

Oh–names!  The smaller baby, mostly beige, was the runt of his…litter?  I don’t know the correct term.  We call him Robin Hood, or Robin for short.  His half brother, who was a giant from day one and is white with a beige head, is called Little John.  Robin is the sweetest, and Little John is the most entertaining.