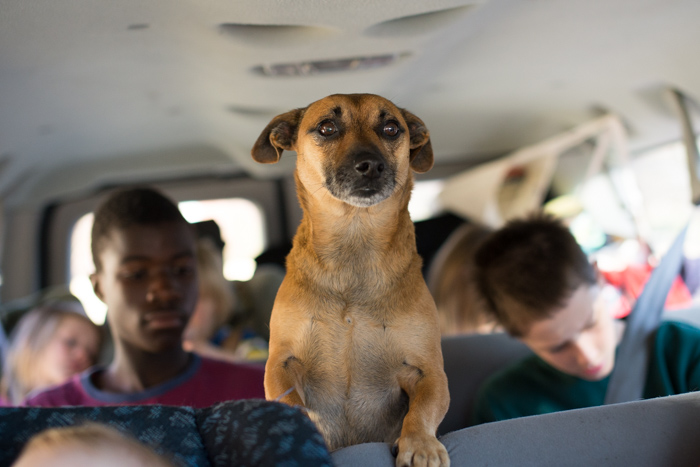 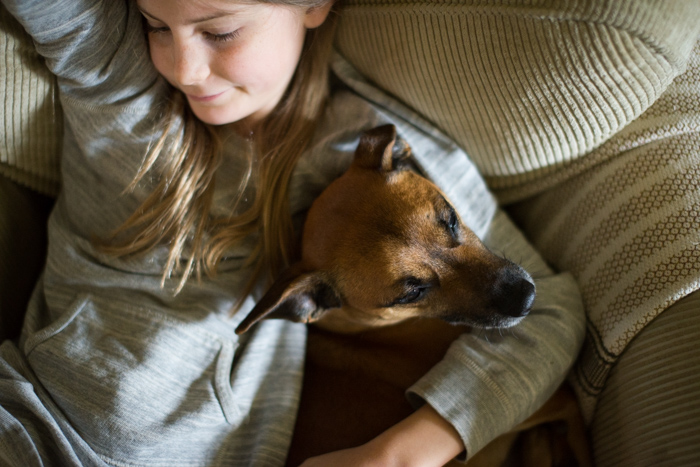 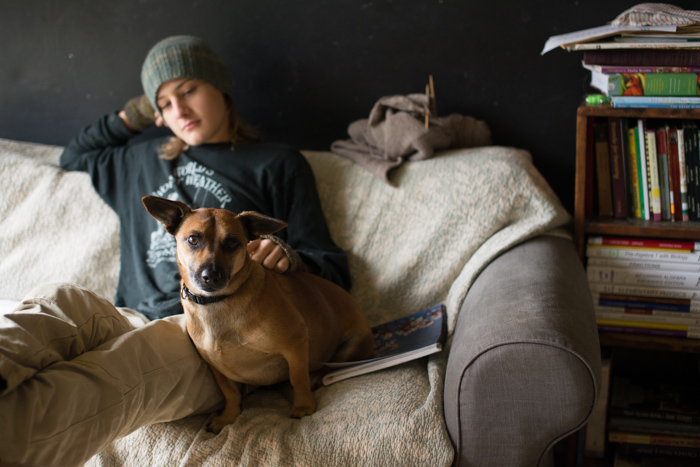 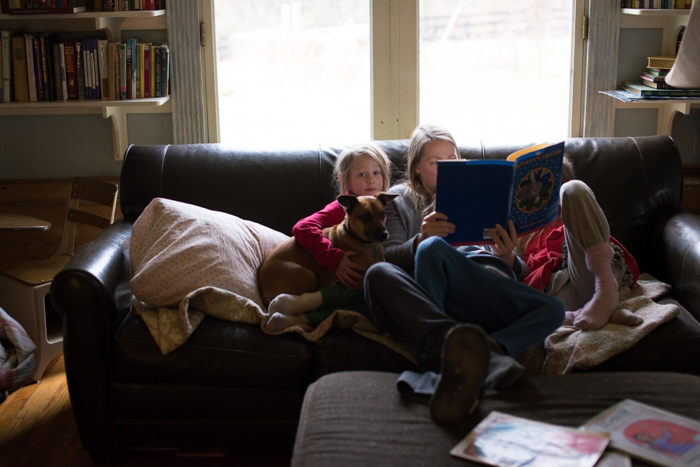 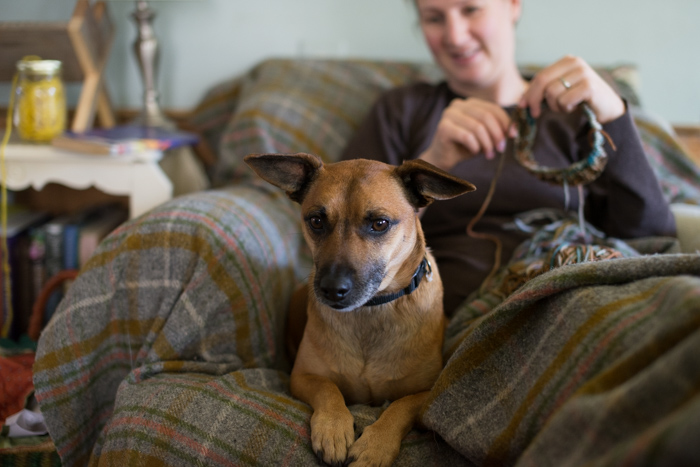 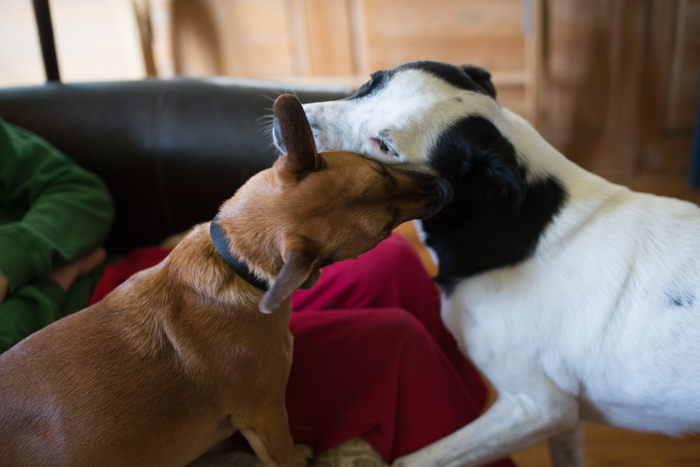 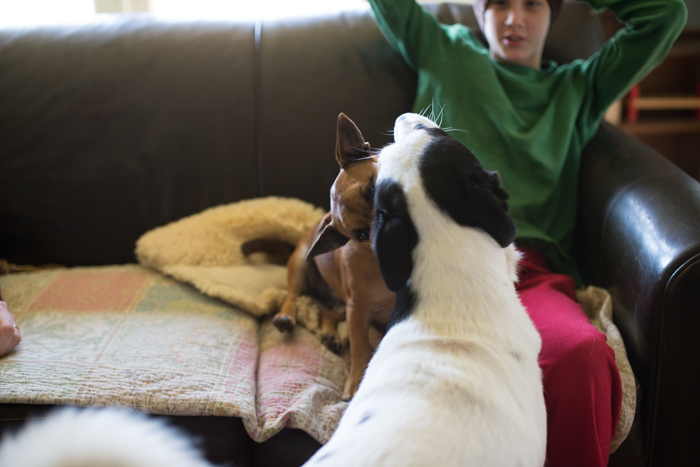 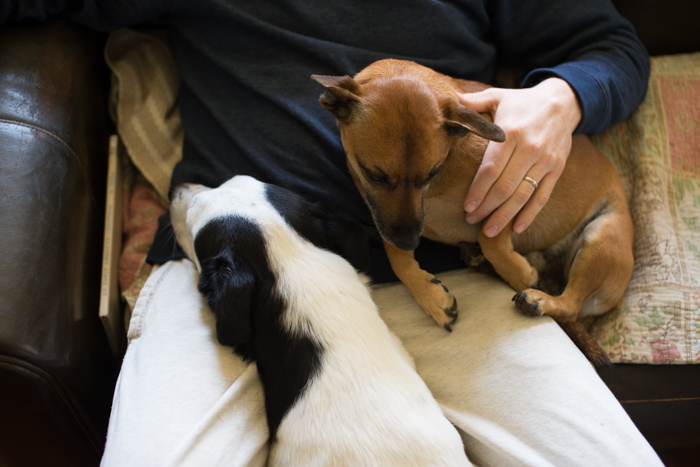 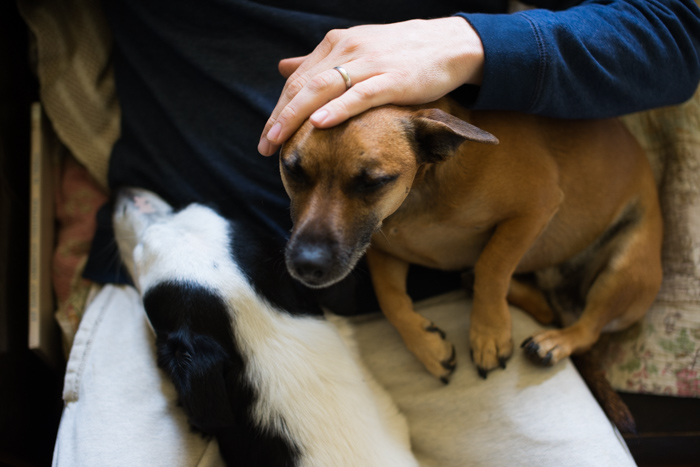 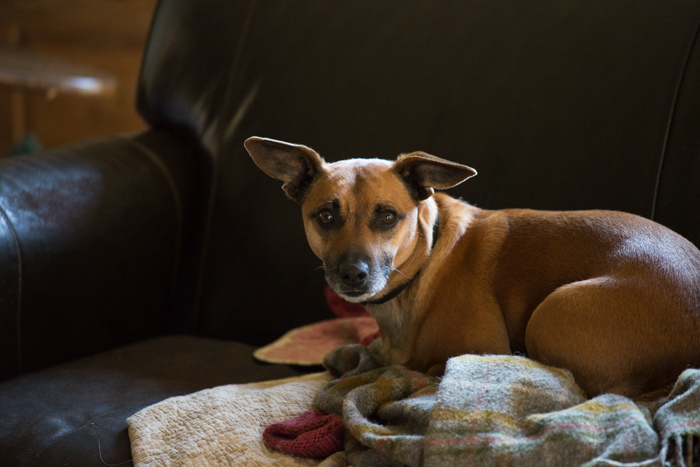 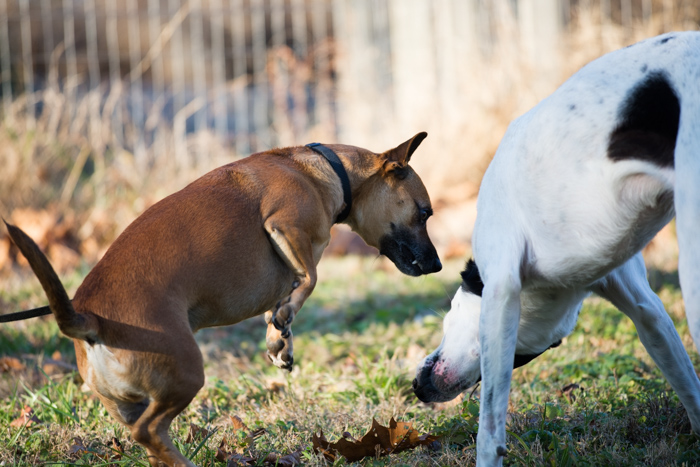 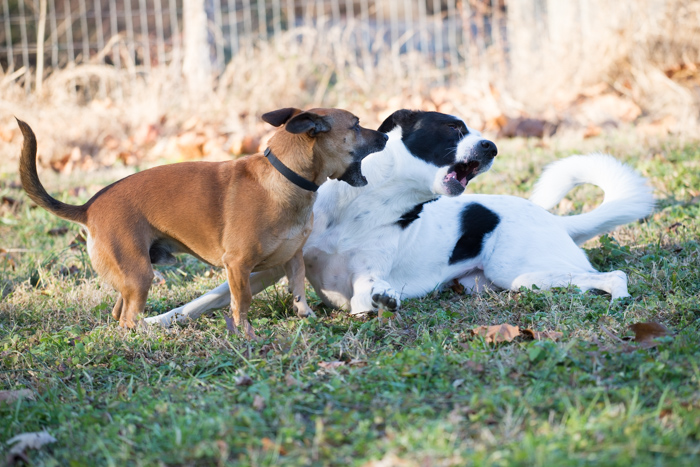 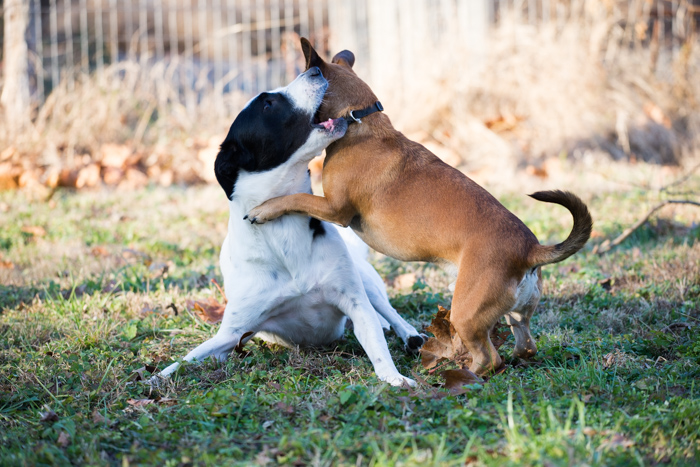 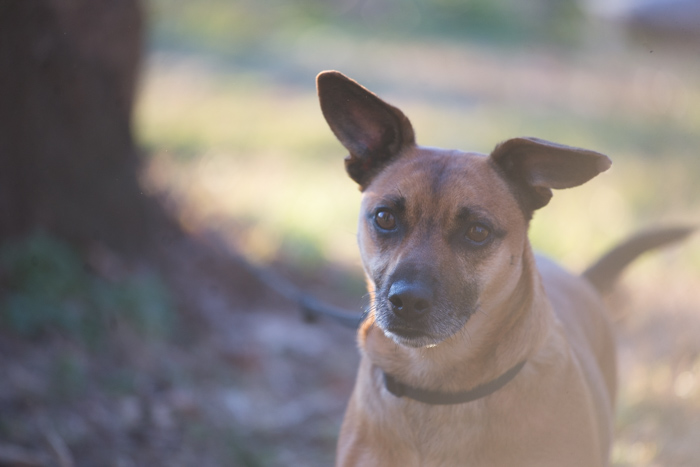 Okay, so yes, I did bring home a little yarn from Georgia.

But in fact, I showed great restraint in that department.  We passed a yarn store on Black Friday, on our way to visit Jonny’s sister.  Jonny, going for husband of the year, suggested that I run in for five minutes, just to check it out.  All the yarn in the store was 25% off.  There was an entire rack of Madelinetosh, the most I’d ever seen in real life.  But, I was really only looking for a couple specific colors for projects that family members had requested, and I didn’t see them.  I walked away with nothing.  It’s a slightly painful memory (25% off!!!!!)

I felt better the next day, when we stopped at Revival Yarns in Athens and I picked up a couple skeins (the greens I was looking for) at 20% off.

We did NOT bring home a baby.  Sorry!

In fact, we brought home a middle-aged mutt named Weasel.  We can get excited about that, can’t we?

Until about four years ago, we were always a two-dog family.  And while we’ve talked about getting another dog for some time, it’s not like we were hurting for more responsibility.  Another dog definitely wasn’t high on the priority list, though I have been wanting a little furry animal to curl up next to me while I knit, preferably one that doesn’t like to play with yarn.

After the little rat episode, Jonny did a Google search for “dogs that kill rats” which turned up a top ten list of canine rat killers.  As you might expect, Trudy was not on the list.  Number one was the obvious rat terrier, and others included Jack Russells and Dachshunds.  We started searching Petfinder.com and I actually spoke to a dog rescuer about a little jack russell puppy.  She didn’t think it was the right dog for us though (“You have how many kids?”) and suggested that the easiest dog for Trudy to adjust to would be an adult male.  Trudy hasn’t ever really seemed to like other dogs.  She has never been aggressive towards them, just uninterested and a little unsure of herself around them.

I got busy preparing for our trip though, and stopped thinking about another dog.

The day we visited Jonny’s parents we met Weasel, a stray that showed up a couple years ago.  They were caring for him, but weren’t attached.  He was living as an outside dog and they mentioned that he had recently killed a rat and left it on the porch.  My ears pricked up at that…

“Did you say he kills rats?”

That had to be a sign, right?  More importantly, he was such a friendly little thing and seemed to love all the attention from the kids.  Trudy seemed to like him as well.

Jonny and I started talking about it.  I didn’t want to be impulsive, and it felt a little nuts to bring this older, outdoor dog home with us, entering into the relationship with a very long car ride.

But, Jonny’s parents thought that Weasel (their name for him, the kids don’t want to change it) would probably really like living with us.  He’d get more attention and get to live indoors.  So we decided to take him home with us.  He loved the van ride, alternately snoozing on the piles of pillows and blankets and looking out the windows.

He’s mostly doing great.  Trudy really likes him and we see a positive change in her.  She seems to be more relaxed now.

Weasel, being a little old man, is a little ornery at night.  He definitely has some quirks.  But, he seems quite pleased to be here, and was obviously already familiar with curling up on furniture.  Overall, he’s really a sweet little dog.

We’re working on house training.  I’ll say this, he’s doing better than a puppy would, and thank goodness we don’t have any carpet in the house.

p.s.  Jonny’s version of this story is much shorter than mine.  “We got a dog named Woozle.  He pees on the floor, but we love him.”

p.p.s.  What breeds do you think he is?  I think definitely some Dachshund.  What else?

p.p.p.s.  There were no signs of rat invasion when we returned from our trip.  Maybe that rat really was a bachelor.