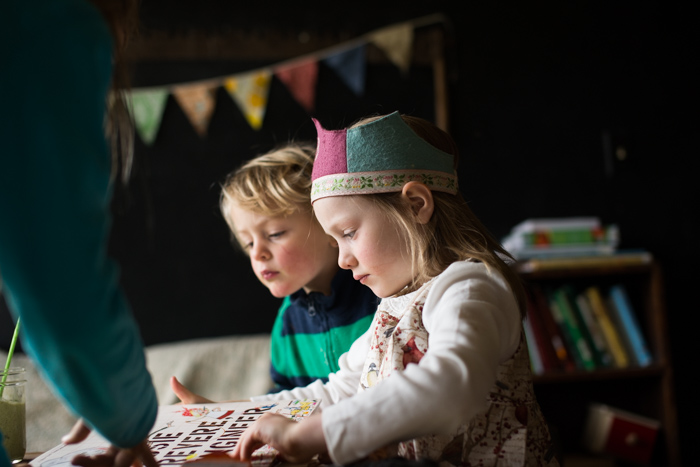 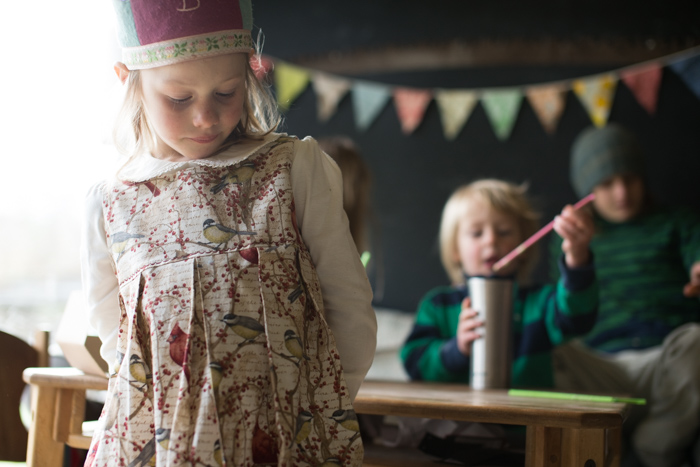 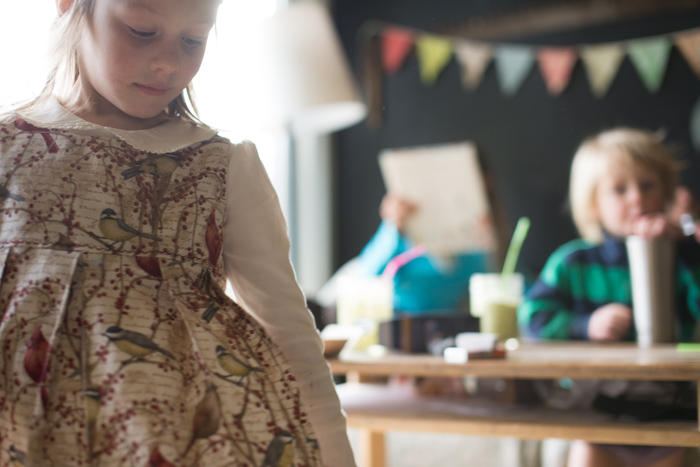 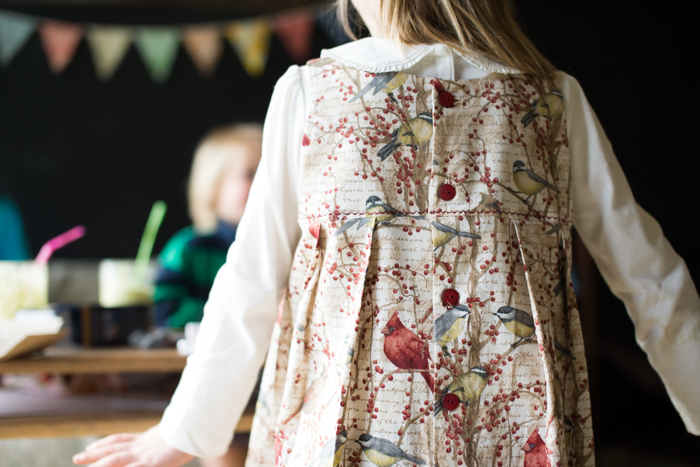 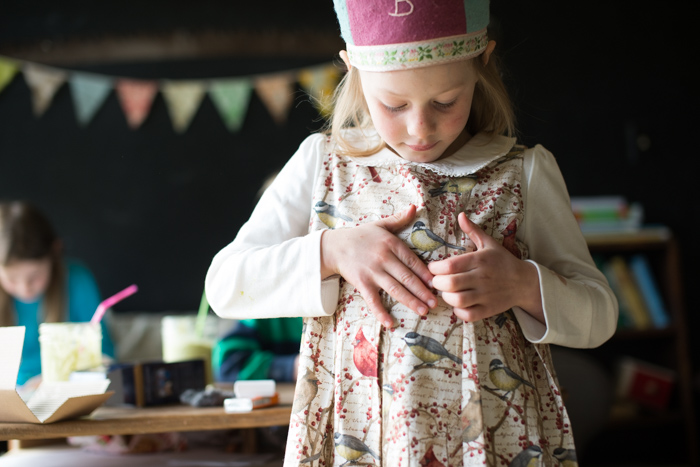 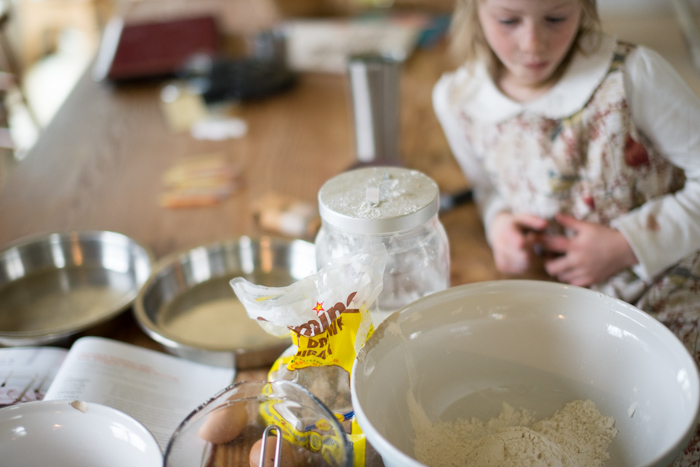 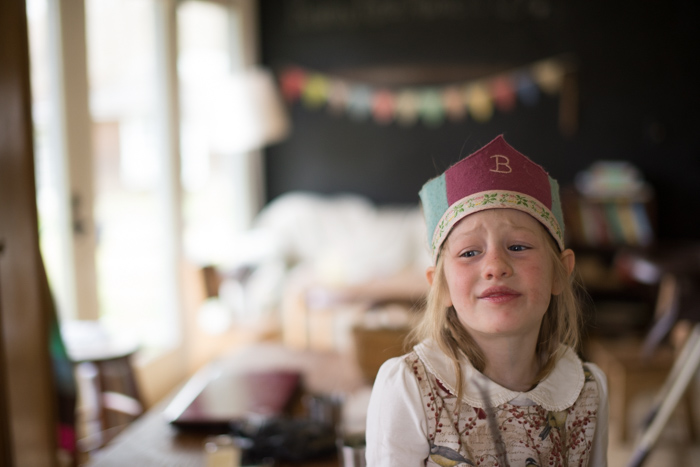 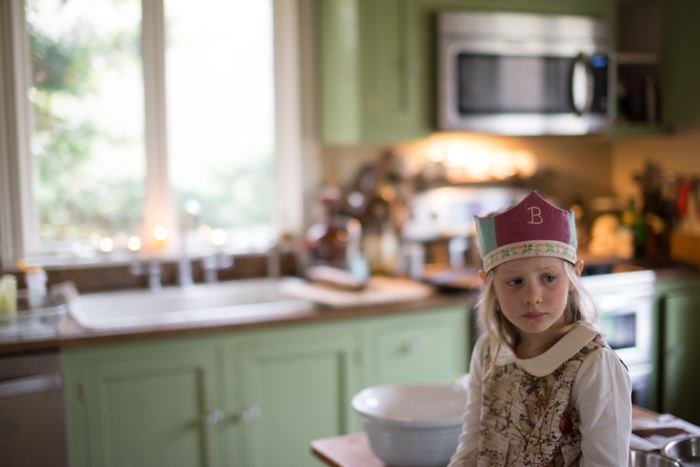 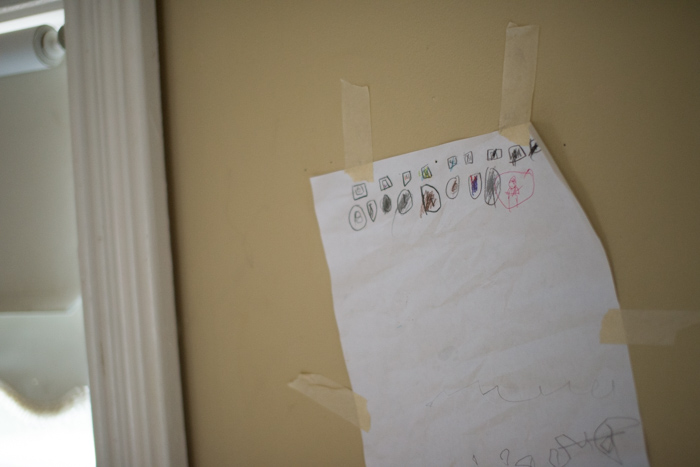 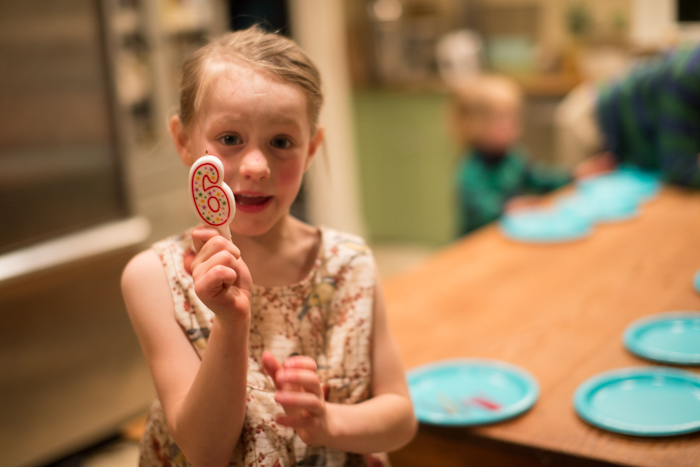 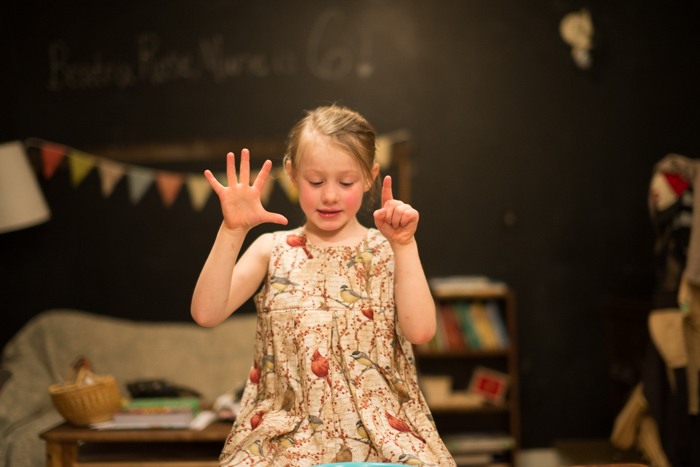 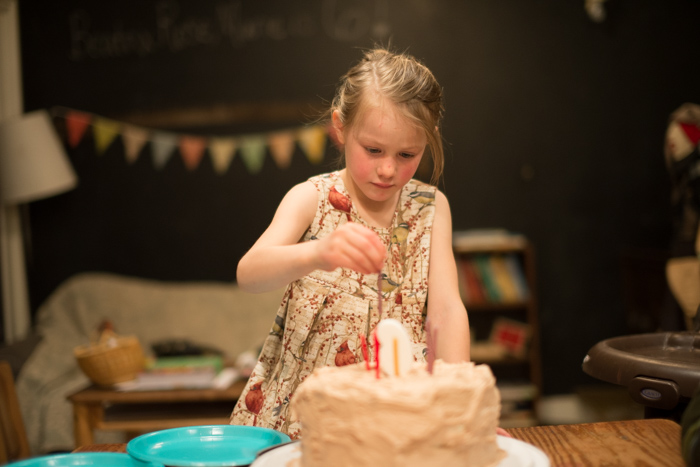 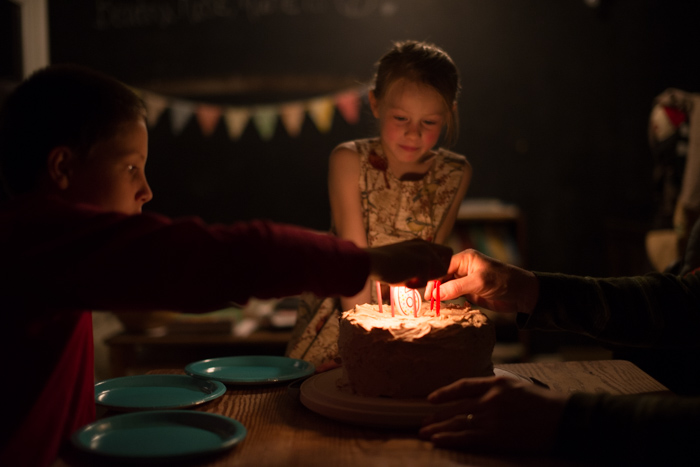 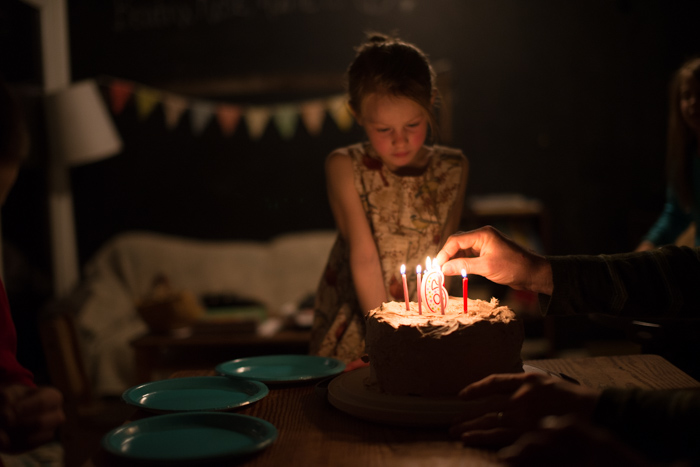 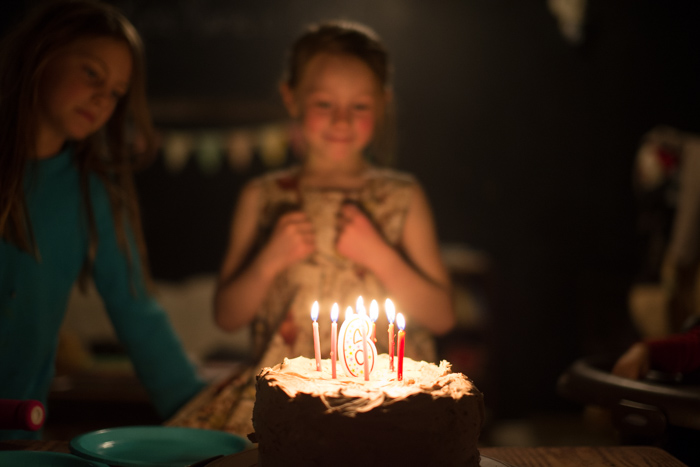 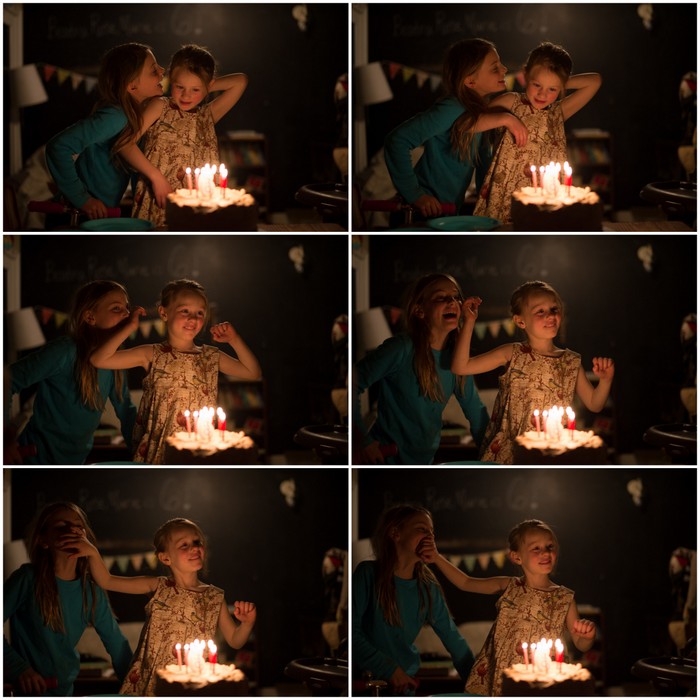 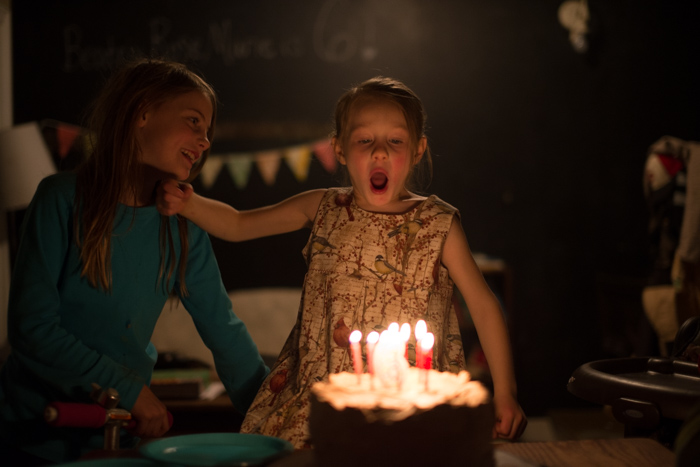 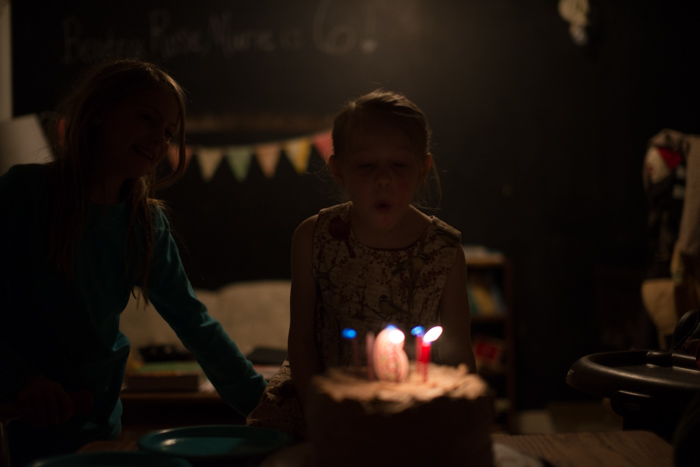 A few days before her birthday, Beatrix asked me when I was going to start working on her birthday dress.  My eyes widened as I responded with something along the lines of, “Are you sure you want me to sew you a birthday dress?”

I haven’t done much sewing over the past couple of years, and as far as sewing a dress goes, I have kind of a mental block there now.  So many steps!  Trace the pattern, cut things out, and on and on.  So much harder than “pick up needles and yarn and cast on.”  But, I had briefly considered making Bea something green for her birthday, as it’s been her favorite color for the past six months or so, and I had been entertaining the thought of maybe sewing her a dress.  So, on the way home from our co op last week, I stopped at the fabric store with six kids.  Ideally, I would have made the trip by myself, but I didn’t have time.  I chose a fabric, a really nice olive-y green print, and Beatrix promptly rejected it.  I hadn’t really counted on her input, and certainly not her rejection of my fabric choice.  She’s awfully opinionated though, so I should have expected it.  I guess I just assumed that I have good taste, and she would agree.

She totally didn’t.  She didn’t like anything I suggested.  She dismissed my choices as not being “seasonal.”  I wasn’t aware that she uses that word, but yes, she does.  She wanted seasonal fabric.  Once she spotted the birds on bare branches, chickadees being her favorite, there was no swaying her.  I groaned inwardly.  It’s not that it’s a bad fabric, it just wasn’t what I was envisioning.  As we checked out at the fabric store, Beatrix informed the lady ringing us up that her mom only had two days to sew her a birthday dress.  She openly displayed her skepticism, but I think that deep down she expected me to come through.

Once home, Bea rejected the dress pattern that I wanted to use in favor of a jumper.  I didn’t argue there at all.  The pattern that I chose was a “two scissors” pattern, and her choice was “one scissors,” meaning easier.  The night before her birthday, I realized I would need a shirt for her to wear under her jumper.  I am not a fan of shopping, and especially not at the mall.  When I emailed my friend Lori (Bea’s godmother!) that I was heading out an hour or so before everything closed to find a shirt, she went ahead of me, quickly scouring the stores for a little shirt with a Peter Pan collar.  She found the only one to be had at our mall and had already placed it on hold for me by the time I arrived.  I was so grateful, especially considering that I still had a good three hours of sewing ahead of me when I returned home.  I finished the dress about two hours before Beatrix’s official birthday began.

The following day, I found myself realizing that Bea’s birdie jumper wasn’t so bad after all.  I have never seen her so enamored with anything that I’ve made for her before.  It was her choice, what she wanted.  And really, it was a lesson I needed to go ahead and learn as far as Beatrix is concerned, though ultimately it’s true for all children.  I did a little bit of letting go of what I wanted for her, and accepted her choice.  Someday it will be something far more important than birthday dress fabric.  This was really just a little practice run.

Happy 6th Birthday to our dear, fierce, little Beatrix!  She’s been quite a force from her very first day and we love her to pieces!