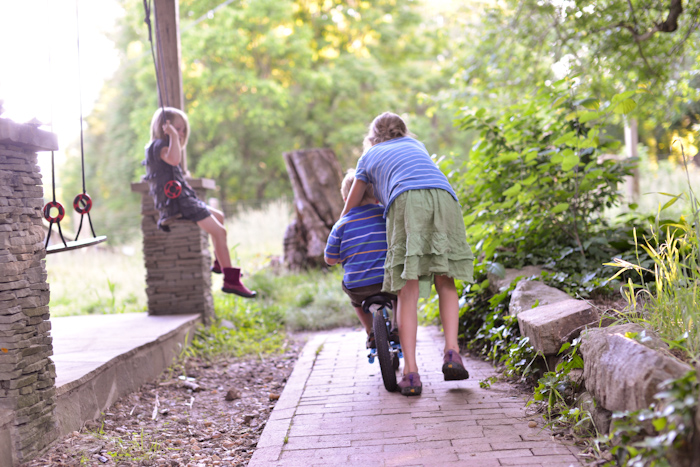 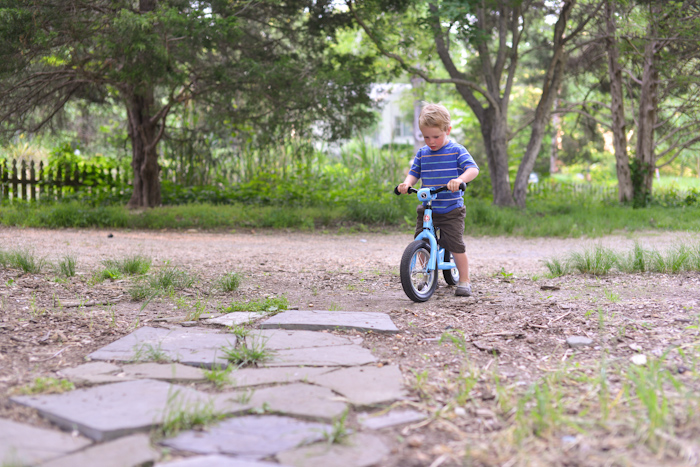 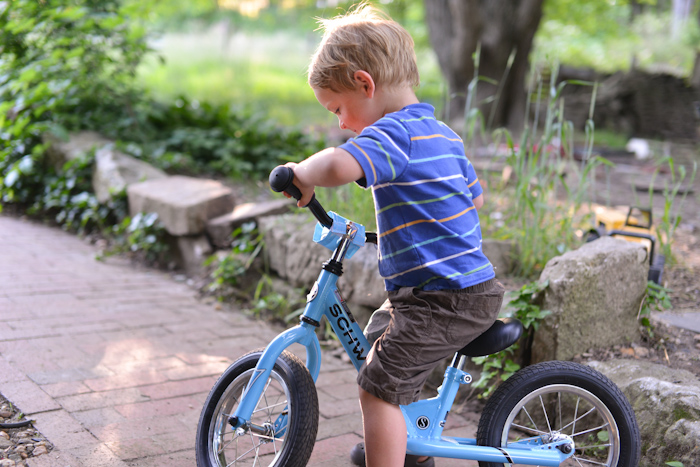 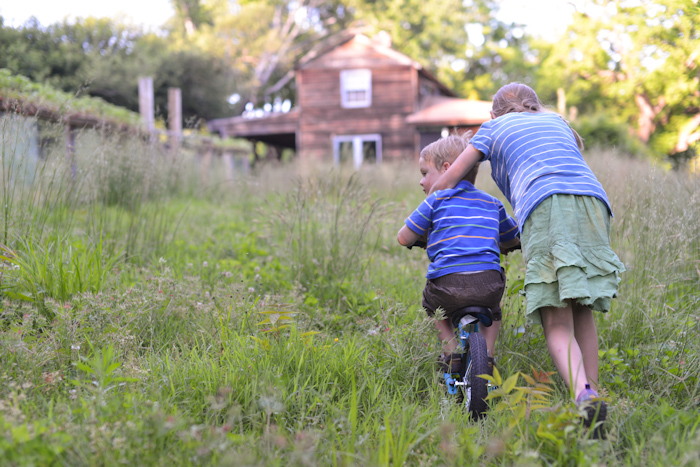 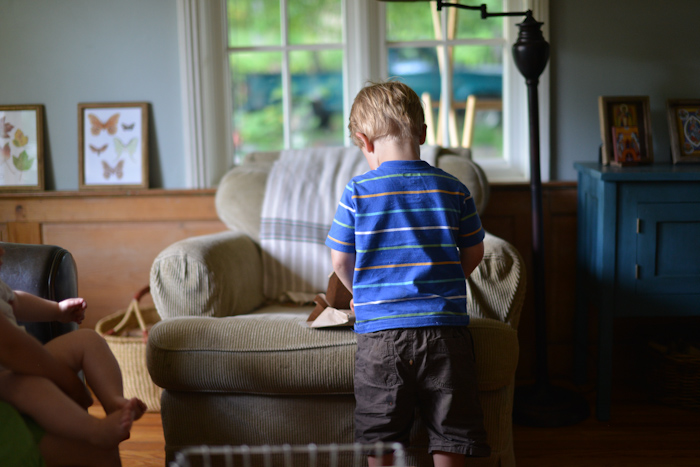 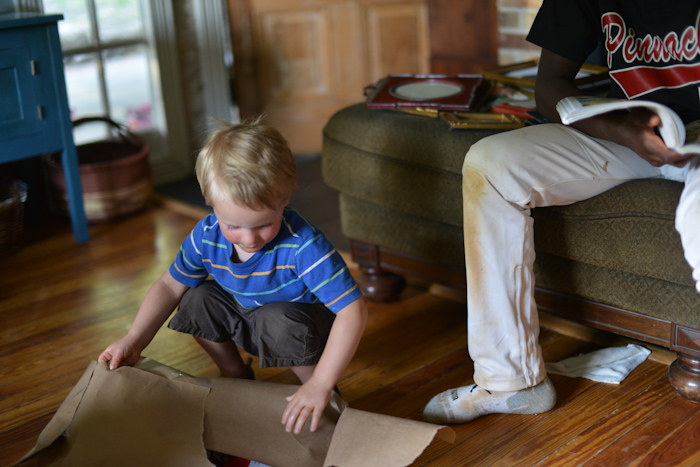 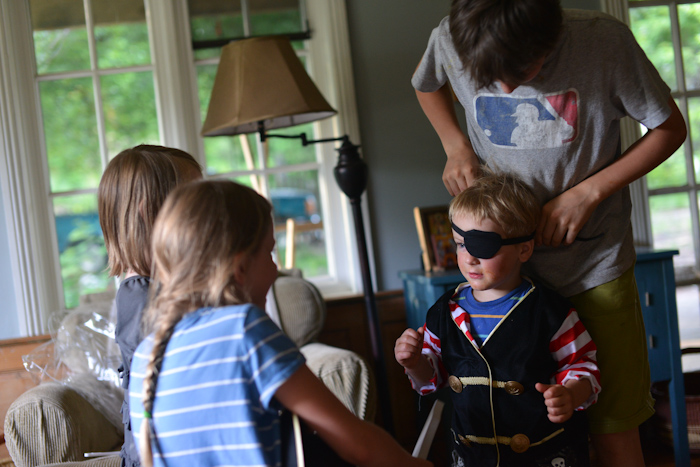 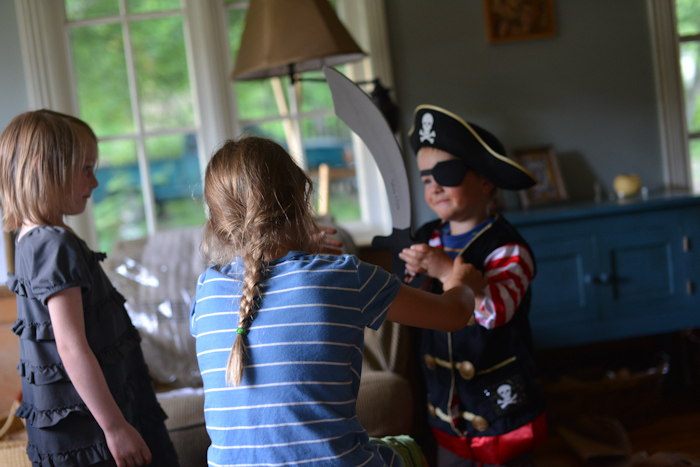 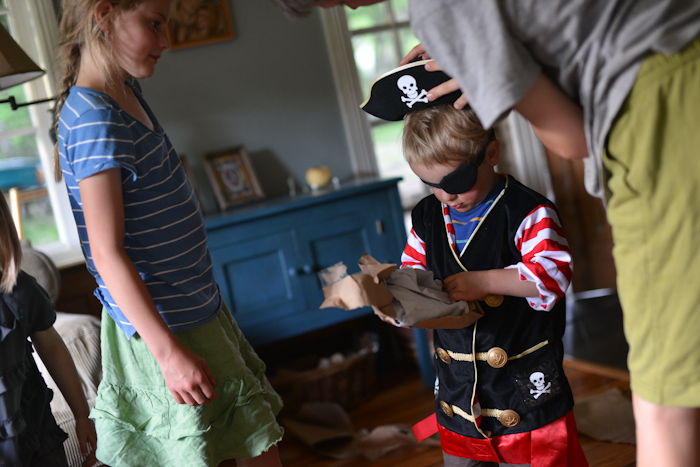 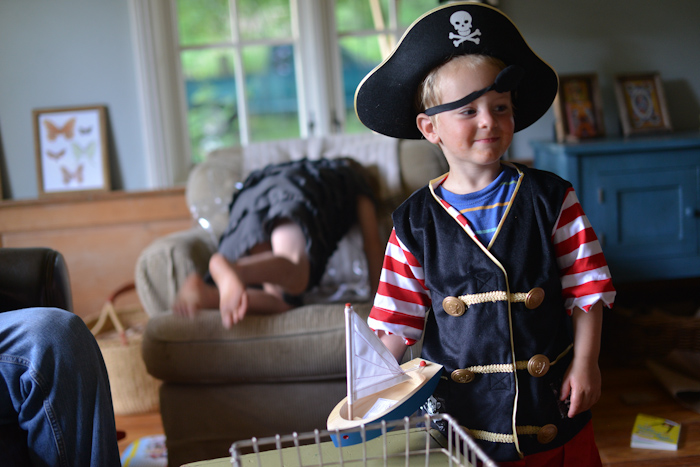 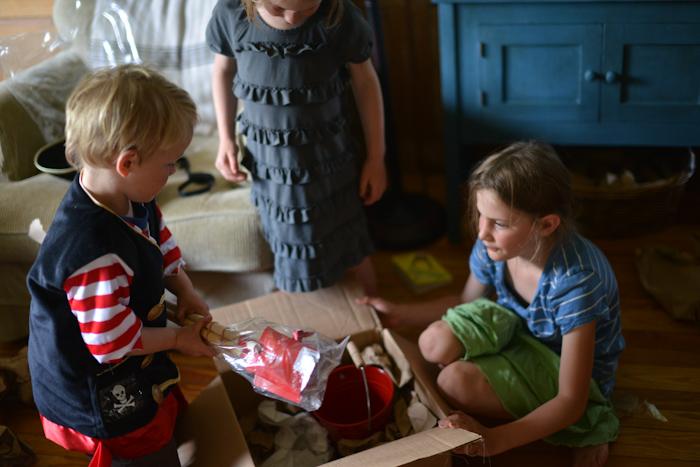 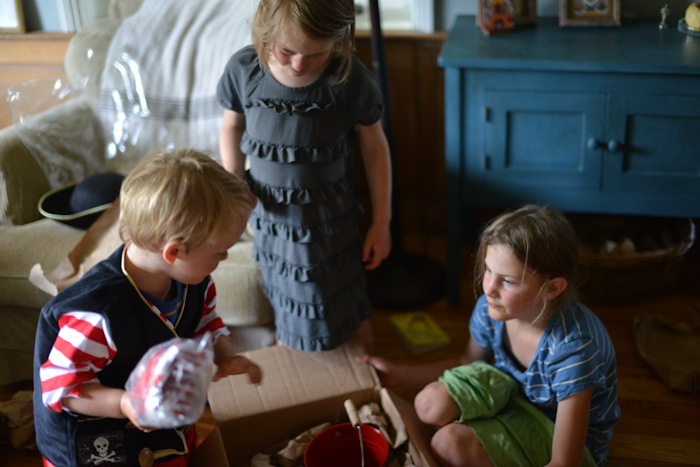 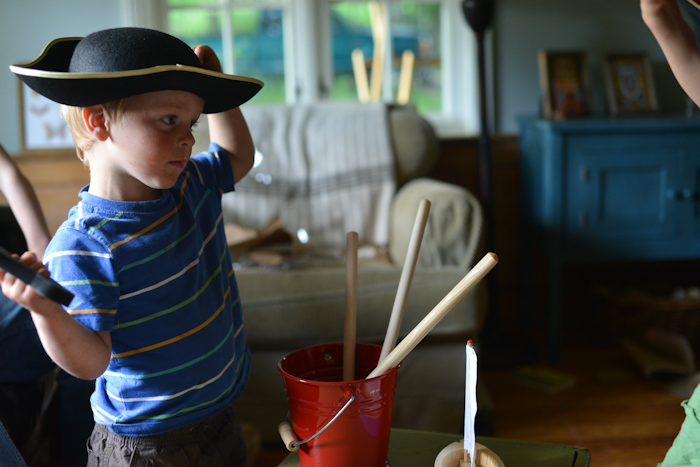 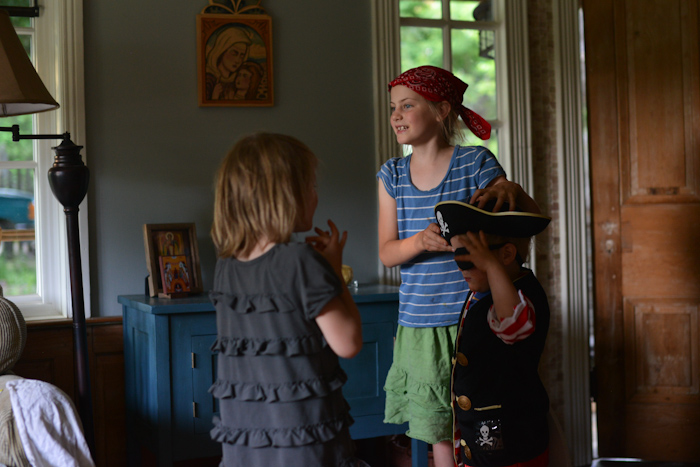 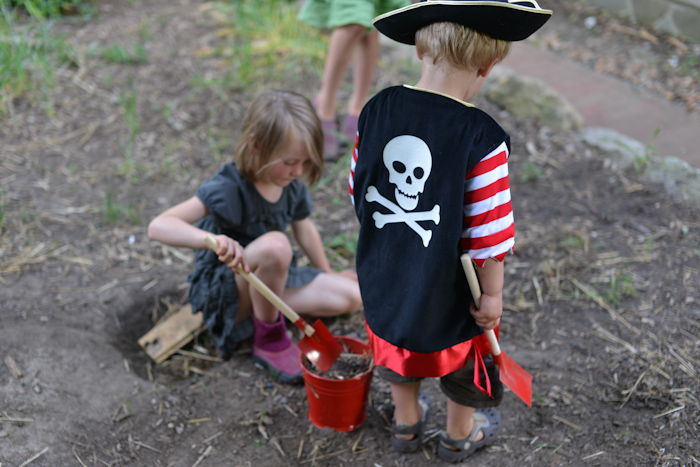 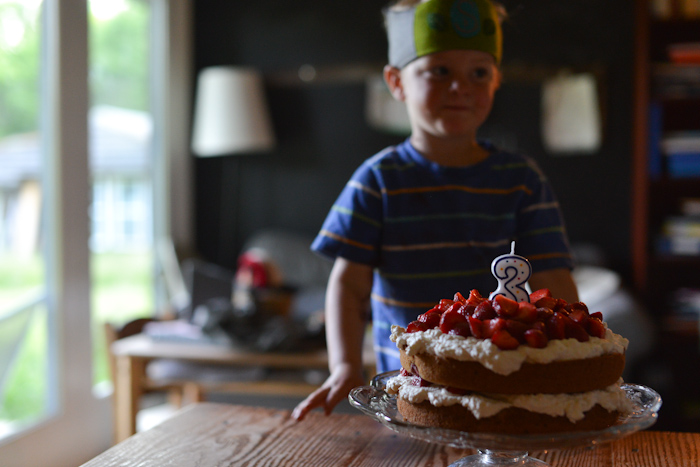 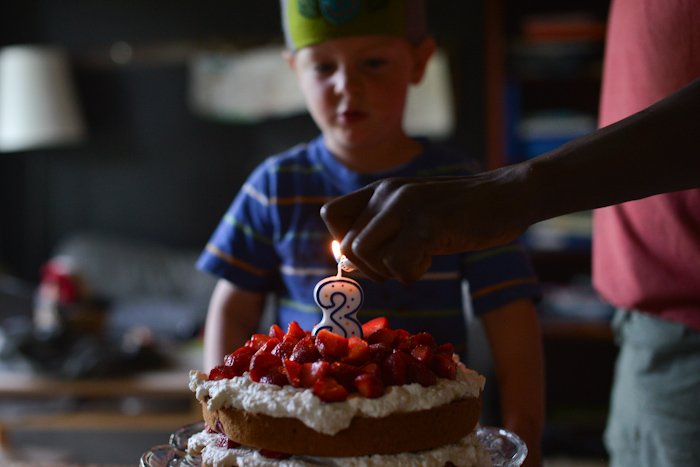 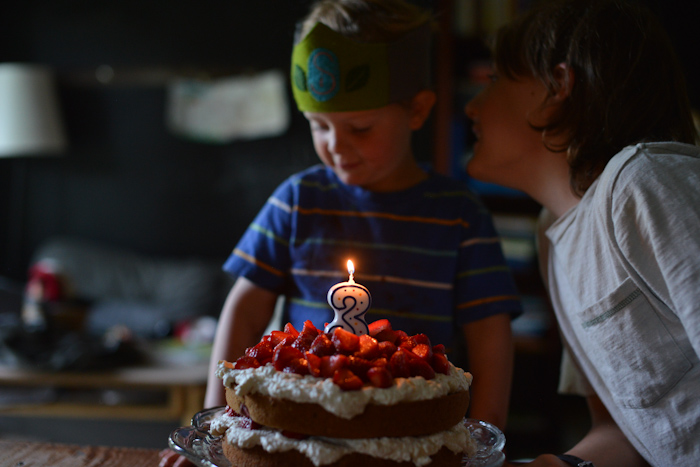 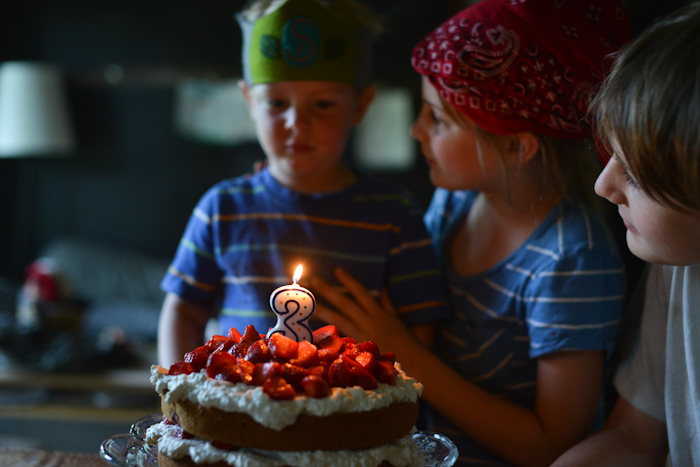 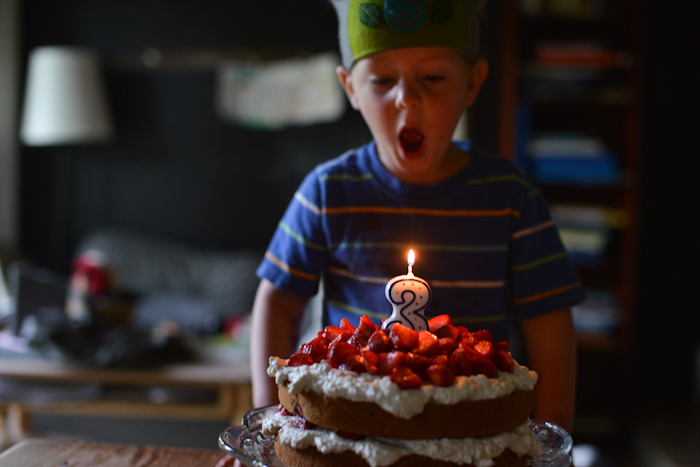 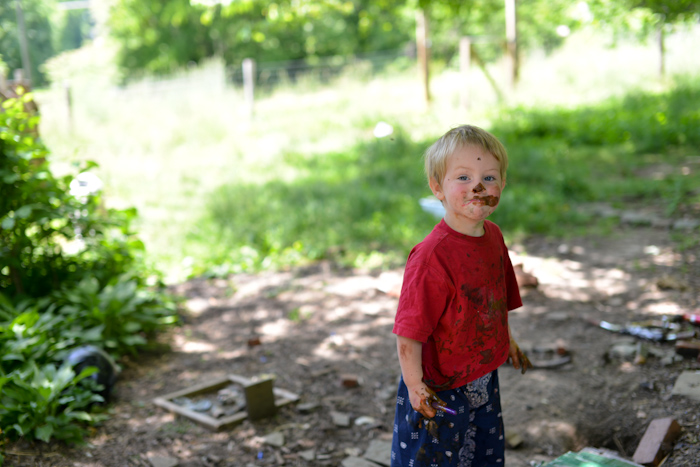 It just makes sense that the child who gets into the most trouble (of all my children ever) is also incredibly funny and truly a delight to spend time with (as long as your focus is him).  Silas is absolutely my favorite three year old.

Yesterday as I started dinner I realized that I was missing ingredients and needed to make a last minute run to the grocery store.  Silas came with me.  On the way he worked on putting his velcro shoes on himself.  I’ll admit that he hasn’t had much practice in that department because there is almost always an older sibling available to help him.  One of the velcro strips came undone and needed to be laced back through.  Silas asked me to help, but I really couldn’t while driving so I told him that it would have to wait.  He told me that he would just do it himself, and he did.  I told him that he had done a great job and that he was really growing up.  His reply was, “I guess I’m this old now,” while holding up four fingers and making a wide eyed funny face.  I love the way that the three year old brain works and I love that I can count on Silas to be hilarious without even trying.

Silas’ big birthday present this year was a balance bike

(The price seems to really vary day to day-when I ordered this one it was$55.)  He was very dismayed at first that it doesn’t have pedals.  He kept looking at it, searching for them in confusion.  Honestly, the gift felt like a flop.  But over the past week he has had a lot of fun with it and is learning to balance.  His older siblings are glad to help.  One of the reasons I chose this particular model is because it has a place for little ones to put their feet while balancing.  As of this writing, I would say that this was a great gift.

For months in advance, there were two other things that I knew I would buy for his birthday, a sailboat and a pail with tools.  All of my older children has been given one of those sailboats at one time or another.  They are one of my favorite things for children.  We have tried various wooden boats, but those are the best in my opinion because they float well and they really last a long time.  We get the Nova Natural catalog and Silas looks through it every now and then and always comes back to that pail with tools, so that was an obvious choice.

for Silas as well.  He likes to play dress up with the girls and usually ends up wearing a dress.  I thought he might like some “boy” dress up clothes.  He really likes the costume and the funny thing is that it immediately launched a huge amount of fort building, or actually “pirate ship” building.  My kids have been building their boats in the front yard all week.  Actually, at this point I don’t know if the structures are still being considered boats, just that they have been having a lot of fun and making a big mess with paint.

I felt a little like Silas’ birthday celebration this year wasn’t good enough, that it was just squeezed in between other things.  My family didn’t return from the fossil festival until late the night before his birthday, there was a baseball tournament on his birthday, and Beatrix was sick.  There was a lot to be preoccupied with.  But in truth, my main focus was the fact that we were celebrating Silas.  We all think he’s wonderful.  He brings us a lot of joy, despite the fact that he creates a path of destruction wherever he goes.

He’s lucky because his birthday falls during peak strawberry season.  He requested strawberry cake, and I gladly made him one.  This recipe makes such a moist cake, and if you serve it with whipped cream and strawberries you end up with a strawberry shortcake-like dessert that doesn’t give a tummy ache according to my kids even if you eat two pieces (ask me how I know.)  So quick, go make that cake before strawberry season ends!!

Happy birthday, Silas!  I hate to break it to you, but you actually have to stay three for an entire year.  Pretending that you are four in the face of accomplishment is understandable though.