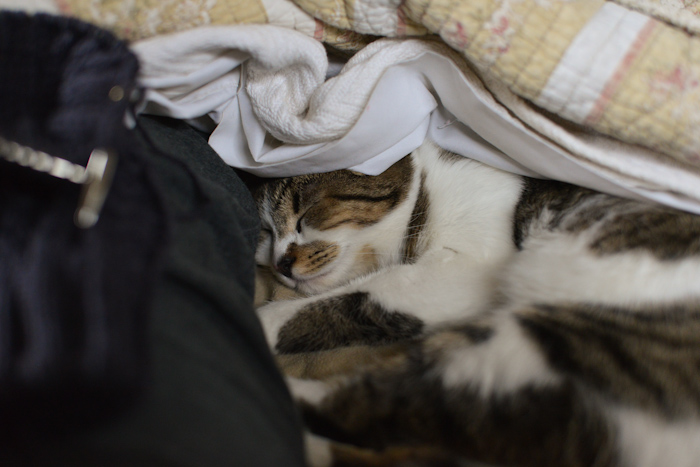 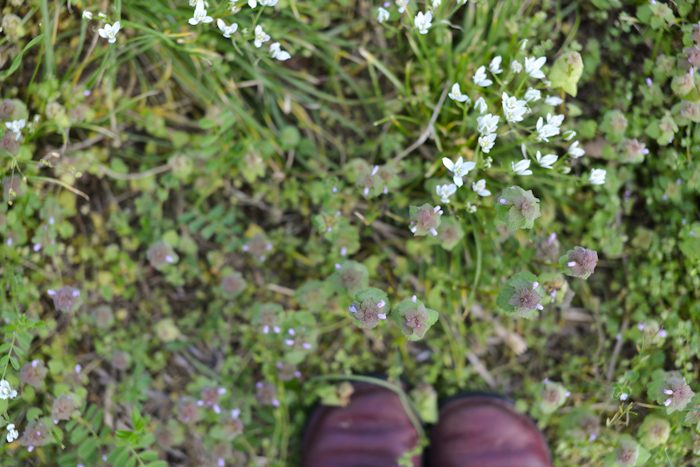 This morning, Gabe and I were going through one of our beehives when Seth shouted from the top of the hill that Em Em was dead.  We’d been looking for her all morning.  As much as we’ve tried to keep her indoors, she wanted to be outside sometimes, and with all the comings and goings of everyone, she’s been slipping out regularly.  This morning we were worried when we couldn’t find her, but assumed she was in her new favorite hang out under the house.  In fact, she’d been struck by a car.

I stood there in my gloves and jacket surrounded by an angry group of bees (queenless colony) almost frozen in place.  My mind did that thing, that it’s not possible thing.  But then I heard the wails start as the girls heard the news and I started quickly putting supers back in place.  I hurried up the hill fumbling with the zipper on my jacket, finally getting it over my head.  Silas was at the top crying.  When I picked him up, he mentioned that he had fallen down.  He wasn’t actually crying over Em.  At this point I began to sob myself.  I set Silas down only to pick up Beatrix.  I held her in my lap on the porch and cried.  I wanted to be strong and brave, but I couldn’t.  Jonny was already digging a hole, I guess just wanting to quickly get Em taken care of.  Through tears, Larkspur was gathering flowers to place on the grave.  Everything happened so quickly.  It was only last summer that Keats spotted her as a tiny kitten in the Costco parking lot.  He’s always considered her to be his cat.  He was the one to carefully hold her in his lap in the van after I pulled her from the bushes.  His bed was often her first choice at the end of the day.  It’s almost harder to watch an older child fight tears than it is to watch a younger child cry openly.

We took the kids for ice cream, and then I had a night out with friends which helped.  I’ll confess that I had both a hot fudge sundae and a salted caramel milkshake in one day.

Anyway, this is the last thing that I wanted to be writing about tonight, but I figure it’s best to get it over with.  Em is in so many of my pictures.  She was such a curious, intelligent little cat, always right in the middle of things.  It’s difficult to lose a pet, at least it always has been for me.  Even more so is to watch your children grieve the loss.  Em will be missed.  She can’t be replaced.

(Hardest time picking photos to go with the post…old one of Em curled up next to me while I knitted.  Recent one of weeds and not even pretty ones–totally unrelated-oh well.)