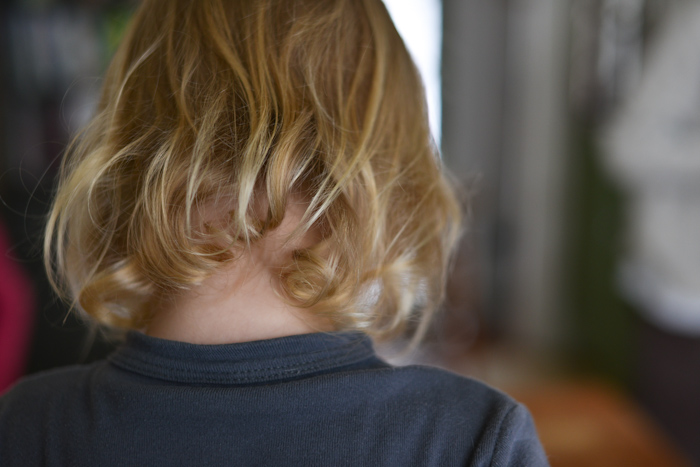 Lately, Silas’ hair seems to keep coming up.  Friends, acquaintances, and even anonymous strangers have been suggesting that we cut it.  I am not easily offended and I really don’t mind when the comments are made by people who love us.  In fact, we actually nearly did buzz it all off last weekend after Silas cut it himself with scissors, close to the scalp and right up front.  But then, we just couldn’t.  It’s not just me, Jonny doesn’t want to cut it either.  I tried to explain to a friend that I look at those curls, the ones my boys seem to have as toddlers and by some cruel twist of genetics my girls never do, and the thought of cutting them, it makes me cry.  I won’t pretend that’s rational.  I know it’s just hair.  But I can try to explain.

Only recently I transitioned from being a mom to young children, to being a mom to teenagers as well.  Late last summer I had a devastating experience with one of my older kids that left me heartbroken.  In the midst of it, I spent an entire night sobbing, unable to see how I’d face the road ahead.  But by the Grace of God I crawled out of bed puffy and red faced the next morning and I did.   Hard talks were had and we made it through, but the experience left a lasting mark.  It might sound dramatic, but I knew that for me, being a mom would never be the same again.  I think that must happen to most moms at some point.  There comes a day when you realize that parenthood is going to break your heart, again and again.

A couple months later, Job was born.  He was over ten pounds and had severe shoulder dystocia.  In other words, he got stuck.  His birth was terrifying.  Nearly five months later and I am still not the same physically or mentally.  I look at Job’s face and his perfect sweetness, perfect innocence, and I cry sometimes.  I cry because of what he and I went through, but  I also cry because I know he might break my heart one day.  I know what that feels like now.  I marvel over each little physical milestone he reaches, while mourning the phase he leaves behind.  I get all mixed up, the trauma of late last summer and then Job’s arrival muddling my brain and dominating my emotions.

As we’ve entered this new phase with our older children, this parenting thing, it’s turned out to be so much harder than I ever imagined.  And once you realize that, there’s not much you can do but keep moving forward, and keep loving your kids, knowing that there is pain ahead.  Even in the best case scenario, we are loving them so that one day they will leave us.

So maybe you’ll understand when I tell you, I’m not ready to cut Silas’ curls off.  And maybe you won’t.  Tell me he looks like a girl, and I’ll just have to shrug my shoulders.  I have to be honest, I’m not worried about that.  Call me selfish and I’ll tell you the only haircut he’s interested in right now is a self inflicted one.  Call me sentimental and silly and I’ll smile and agree, but I can’t part with those curls.  Because cutting them off will be like taking one step closer to the inevitable.  I know he’s going to grow up, but right now he’s still a little boy not even three years old.  I’m not ready for that first haircut.  Soon, I think, but not yet.  For right now, I’m keeping his curls.