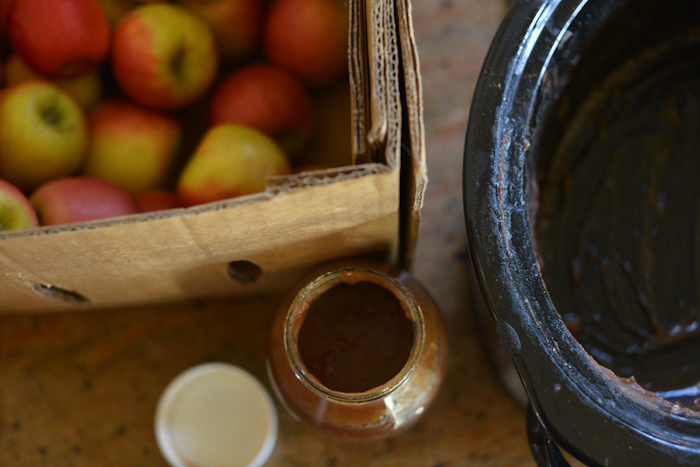 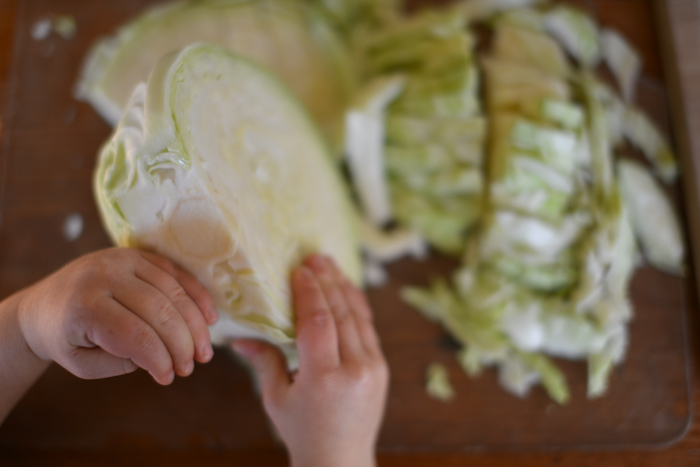 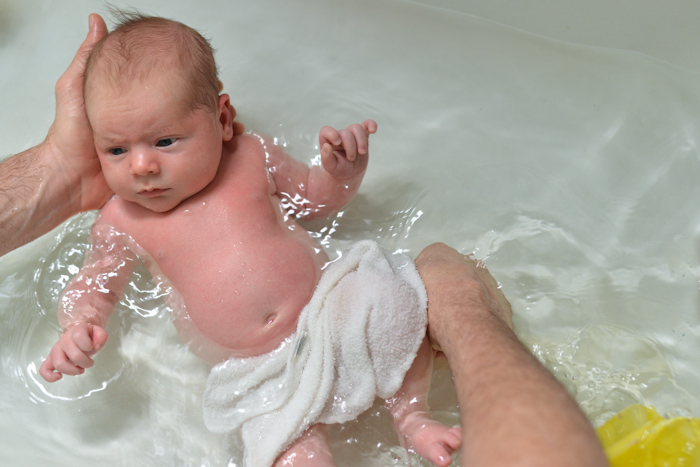 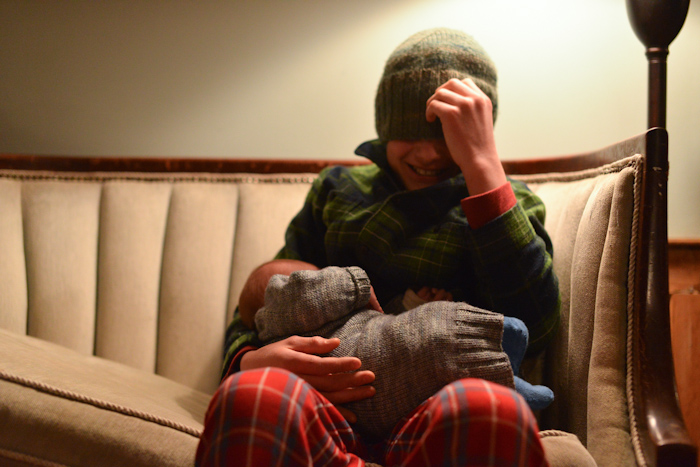 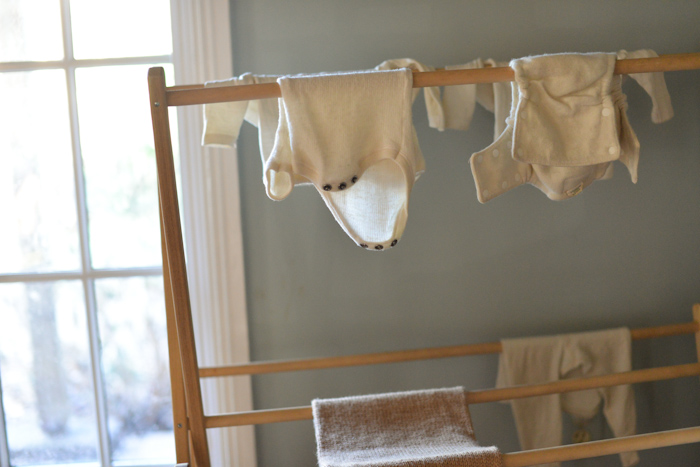 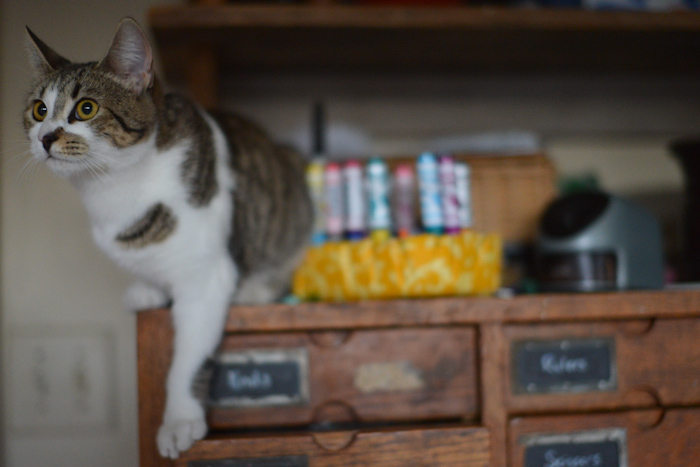 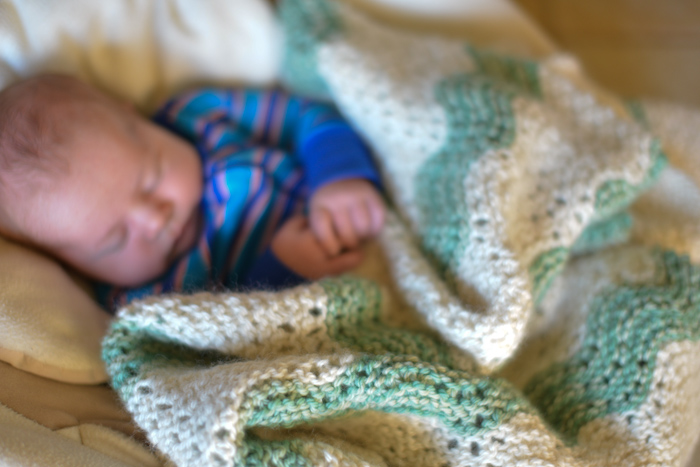 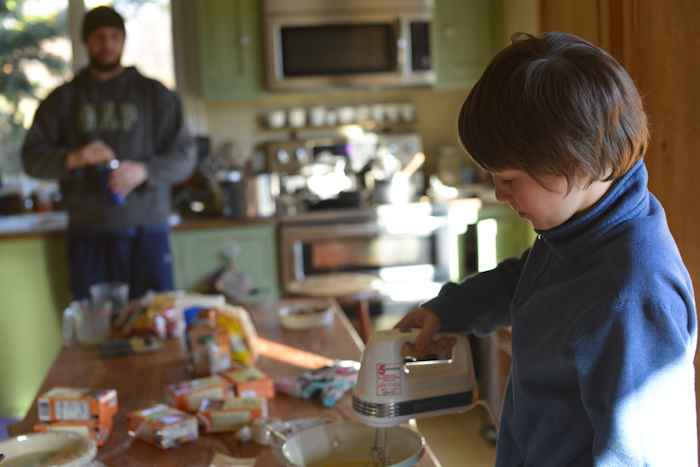 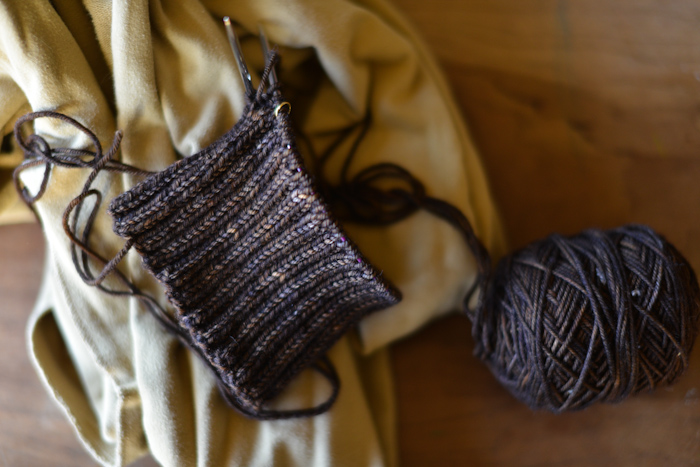 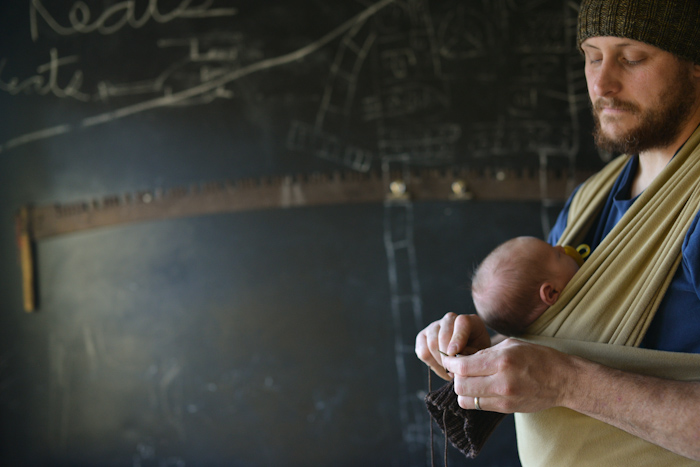 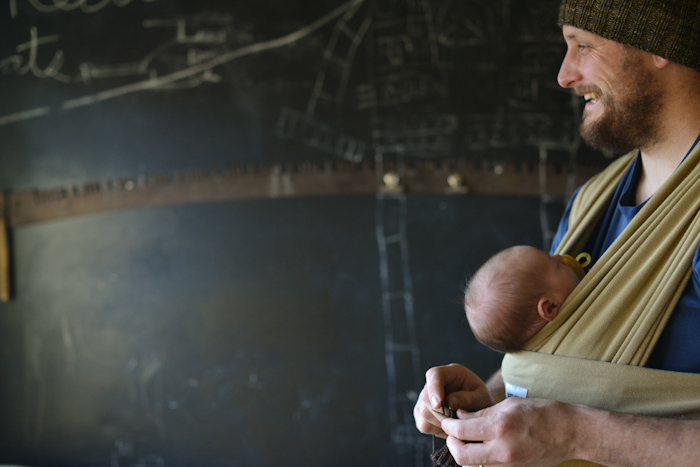 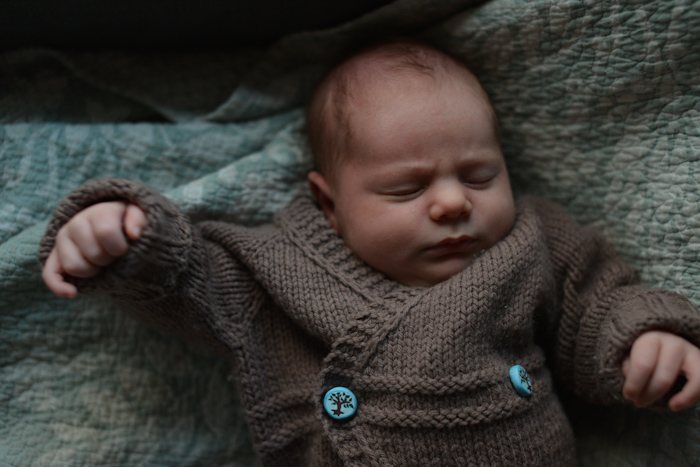 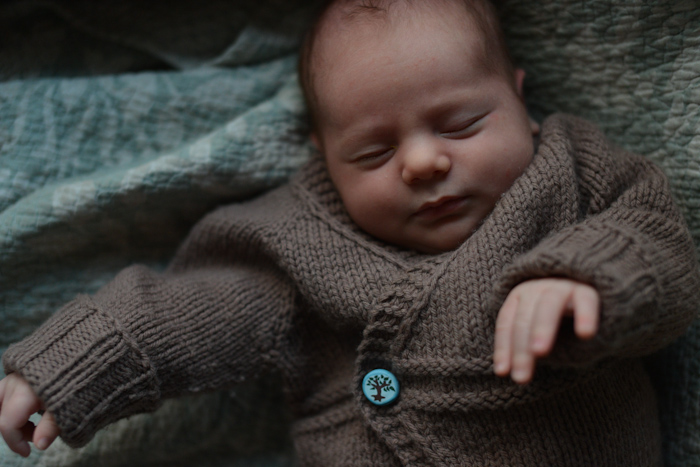 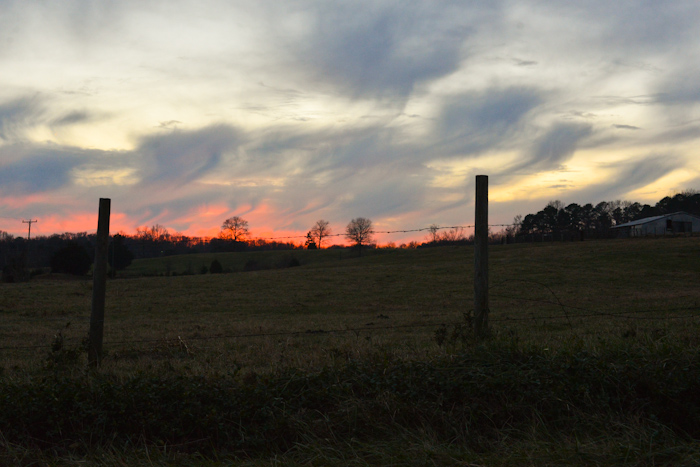 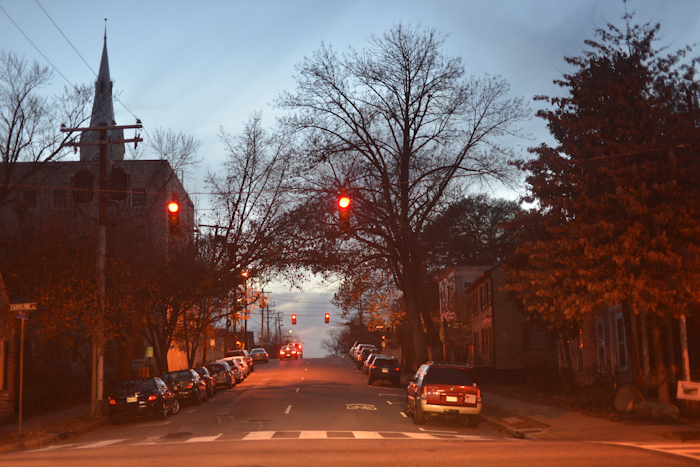 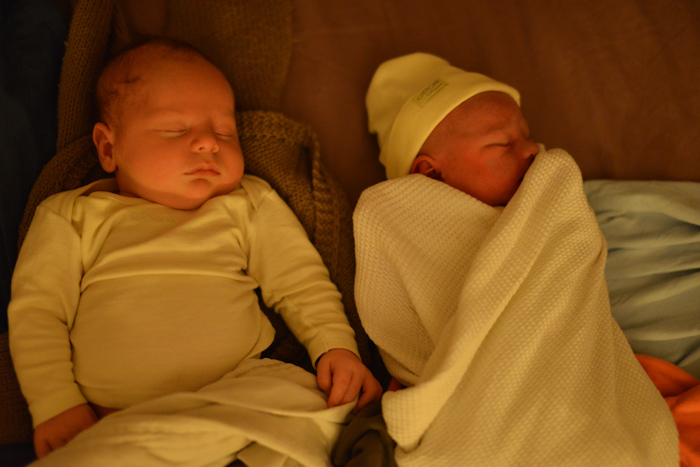 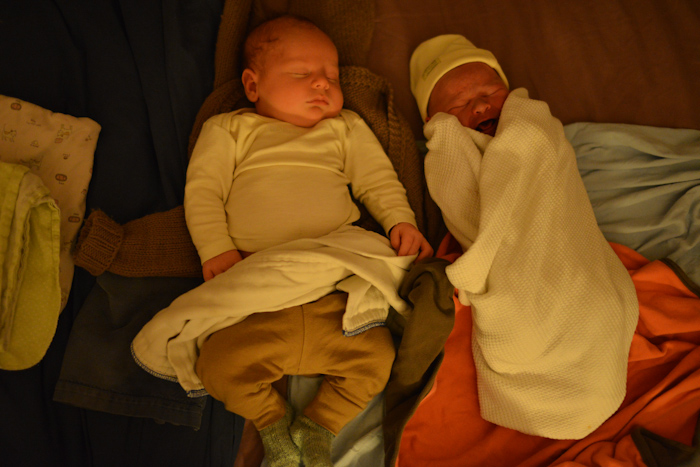 Jonny has been wearing Job in a wrap to give my back a break here and there. He doesn’t actually knit anymore (that was short lived), but was trying to pretend he was knitting to be cute when I grabbed my camera to take his picture. He couldn’t keep a straight face though!

In other news, Seth, who “doesn’t care for babies” held Job for the first time last week.  I did my best to get a picture.  In bigger news, my friend Eve had a baby boy over the weekend!  He and Job were too tired to be properly introduced, but one day Job will be able to tell him that he has known him literally since the day he was born.  Eve’s baby was nearly 9 pounds, and Job still looks like a giant baby next to him!

It’s strange, but good, being able to work comfortably in the kitchen again.  I love being able to stand at the sink while actually facing it, rather than turning my torso awkwardly to the side.  Thanksgiving day found me making cabbage and potatoes (this recipe is simple and very good) rather than more traditional Thanksgiving dishes.  I also made some simple crock pot apple butter.  The plan this year was to hit the grocery store on Friday morning and get a discounted organic turkey as we’ve done in the past, and make our official meal a day late. We don’t have family nearby to celebrate Thanksgiving with, so it was worth shifting the holiday by a day to save a little money.  Of course we arrived at the grocery store to find them sold out of turkeys this year.  I was lucky to find a smoked turkey breast in the freezer section.  In fact, I think I was really lucky to end up with a precooked turkey that simply needed reheating considering I have a four week old baby (four weeks today!  I can’t believe it!) who mostly likes to sleep in someone’s arms.  It goes like this:  I lay baby down.  Baby sleeps for thirty seconds.  Baby passes gas.  Baby starts to cry.  I pick him up.

The morning after our Thanksgiving meal Jonny discovered that our son who is in charge of putting away leftovers had failed to pull the stuffing I had made out of the oven to move it to the fridge after dinner.  The stuffing was the most time consuming and labor intensive thing I made and I made a lot so that we would have some for lunch the next day (I made this recipe minus mushrooms because I don’t eat them, and I even made my own sage sausage because all I had was ground pork.)  I was really upset that we had to throw all that food away, and it was hard not to make a big fuss.  I wanted to, well really I just wanted to cry, but I knew it was an accident.  And accidents happen every day, lots of times.  I’m discovering that as my boys get older, there seem to be more opportunities than ever to correct their manners or get upset over their latest mistake, or the most recent thing that they’ve broken.  I could spend my entire day like this:  “But that was our last mug you just broke!  Please be more careful!  Have you brushed your teeth today?  What?  You lost your deodorant two weeks ago and you haven’t told me?  That explains a lot!  When we ask you to load dishes, we mean all of them, not just the ones that are already in the sink.  What do you mean you haven’t started your school work yet and it’s 9 p.m.?  Did you pull that shirt out of your dirty laundry?  Seriously?  I know you don’t care what your hair looks like, but you have to at least try to fix it for Mass.  Stop treating your sister like that!  She’s half your age!  You should know better!”  I could go on and on and on.  And at some point I realized, that’s exactly what I was doing.  All of that correcting was replacing relationship, or was at least paving the way to do so.  What good is any of this, if they eventually don’t want to talk to me anymore?  So I am trying to become more deliberate with my words.  Before I remind, correct, or nag, I stop and ask myself if it’s really important.  Sometimes it is, but sometimes it really isn’t.  When I do decide that it’s important, I really try to watch my tone of voice and my choice of words.  That makes a huge difference.  And then a few days ago, I got this advice from another mom regarding teenagers, “Praise them twice as much as you correct them.”  I’m finding that this is harder than I thought it would be.  Generally speaking, parenting these older kids is proving harder than I thought it would be.  I am also realizing that as much as they have to learn and grow, so do I.  So we’ll have to do it together, and I’ll pray that I don’t screw it up too badly on my end.  And at the end of the day, I’ll remember to beg for Grace.