This weekend’s giveaway is from Alejandro Ortega, the artisan toy maker of Made by Alejandro. Together with his four children, a princess and three little savages, they fight to protect their mama from the forces of evil: imagined or eight-legged, it doesn’t matter.

Born and raised in the Bronx, NY, Alejandro Ortega’s introduction to leather began in his junior year of college, while taking a theater class. He was introduced to and gravitated towards the Italian art form, Commedia d’el Arte. In 2007, he traveled to Italy for a month-long Commedia mask making course. Alejandro returned with a better understanding of what leather can do that went beyond just mask making and encouraged him to pursue his love of working with leather. Because mask making is so much fun yet such an involved process, he began doing smaller projects such as bookmarks, knife sheaths, arm bracers, cuffs, 3-ring binders, and beautiful yet practical “tools” that he uses on a daily basis in his other business as a sub-contractor. All of these helped him to get better at the skills he used in mask making but allowed him to change the application. What started as a hobby, turned into a passion for a new art medium: leather. 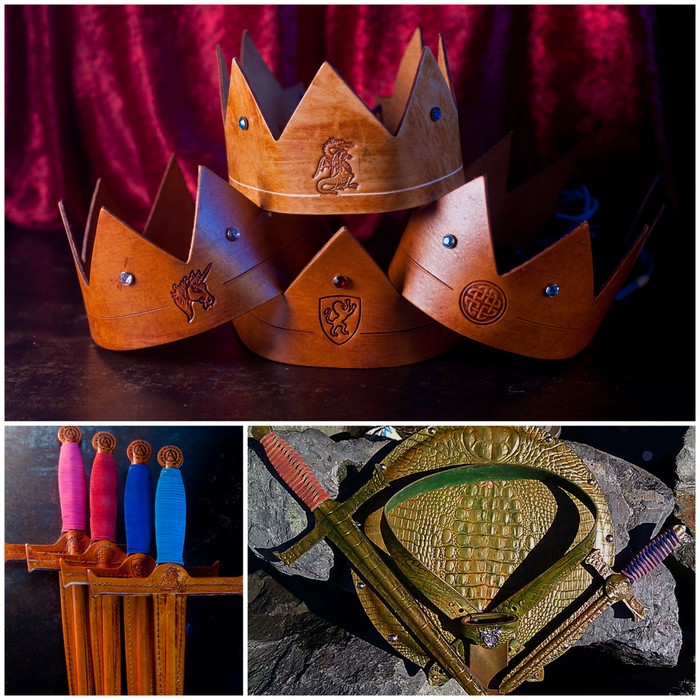 Alejandro has shared his skills in leather working by taking on a summer intern and by teaching classes such as mask making to adults and teenagers, quiver making to tweens, and leather tooling to children in a homeschool co-op.

The big push of going from leather as a hobby to leather as a career, came after seeing the movie How to Tame Your Dragon. An idea sparked in Alejandro’s head to make some swords and holsters for his two older children. After the first week of ow’s and ouches, he realized the kids needed shields too. At first, his toys were just for fun. He watched his children become the very heroes they admired in the movie. Then, after his friends saw these leather toys, they began placing orders, as well as telling others about his creations. He realized that this had the potential to become more than he had imagined. And within a month, Alejandro found himself with a new title and career as an artisan toymaker. He now sells reenactment toys and other beautiful items at local art fairs(including a weekend at the MN Renaissance Festival), holiday fairs (including two Waldorf schools), a couple of natural toy stores and nearby Waldorf school fundraisers, an Arts Center gift shop, and online through Etsy. 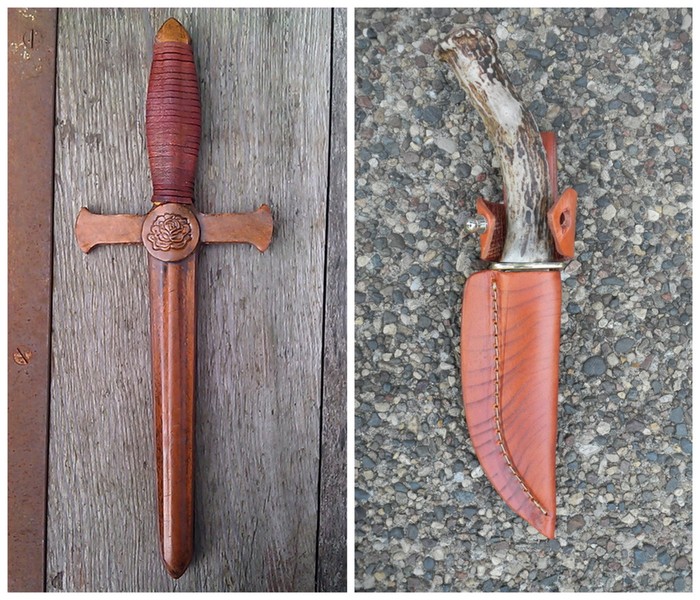 Before Alejandro makes anything, it has to spark a child’s imagination (starting with his own) and cause children to want to play together, be it with other children, or better yet, their parents. He makes everything by hand and is always looking to improve the way he fabricates his toys. Such as, he’s started to sew all of his swords, daggers, and elephants to ensure they are safe, durable, and will last for years to come. And all of the dyes, stains, and sealers he uses are water-based and eco friendly. This kind of attention to detail has helped make the toys children friendly and parent happy. 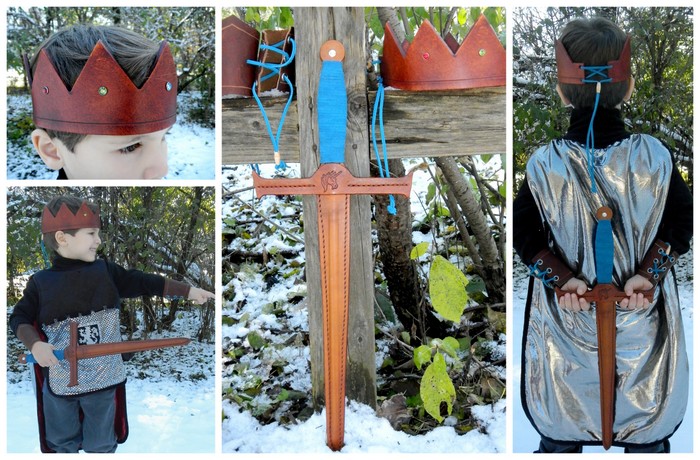 Alejandro is excited to giveaway a three-piece set that children of all ages will enjoy: a turquoise handled SWORD with a Unicorn emblem, a pair of turquoise laced WRIST CUFFS to protect oneself from the enemy’s blows, and a turquoise laced ‘Where the Wild Things Are’ CROWN. Be you noble or brigand, you will be the talk of the village.

Alejandro is also offering 10% off your entire purchase with the coupon code SmallThings2013. This offer is good through this Thursday, November 21st.

Comments are closed.  The winner is Rhonda, “I have been admiring Alejandro’s work for awhile now… such amazing craftsmanship and a real sense for the adventuresome play so necessary for young boys. I would absolutely love to put some of his items under the Christmas tree this year!  Thanks for posting about his work!!”