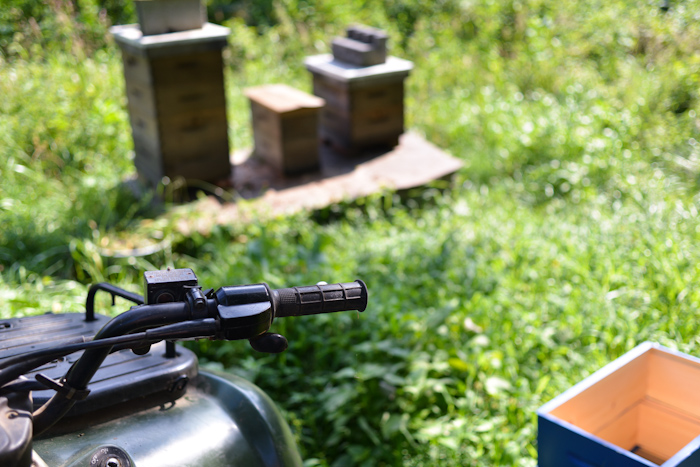 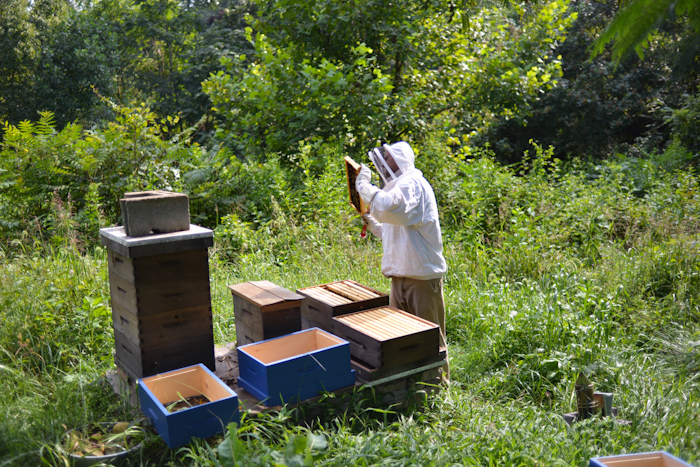 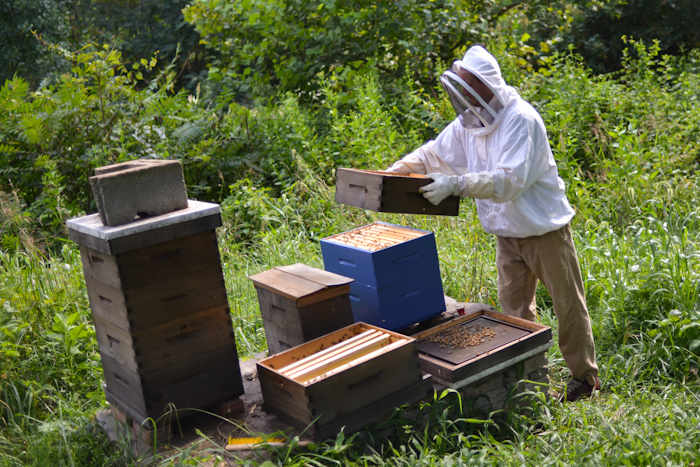 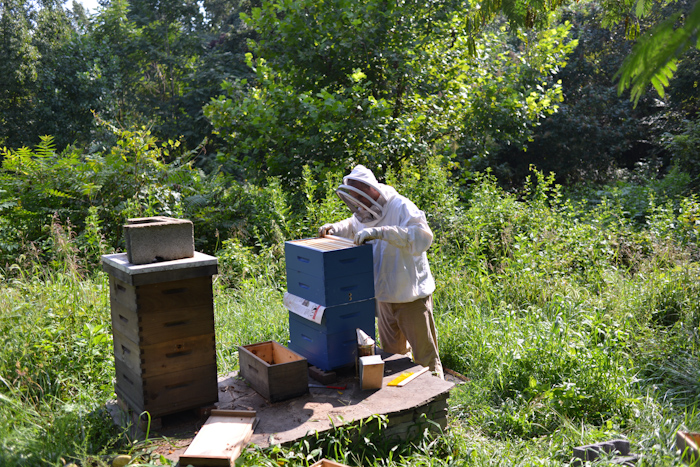 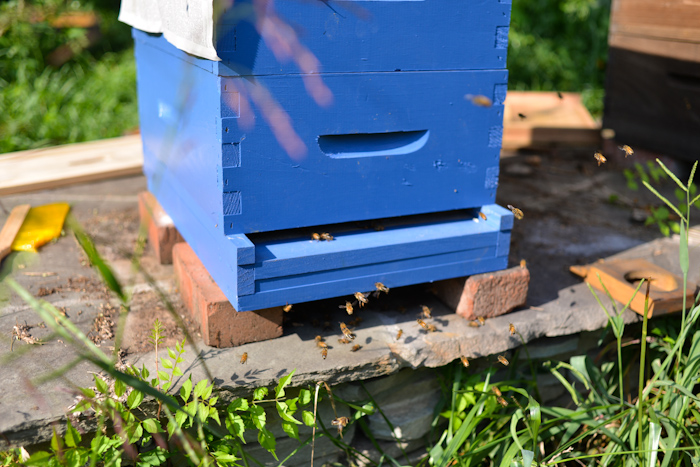 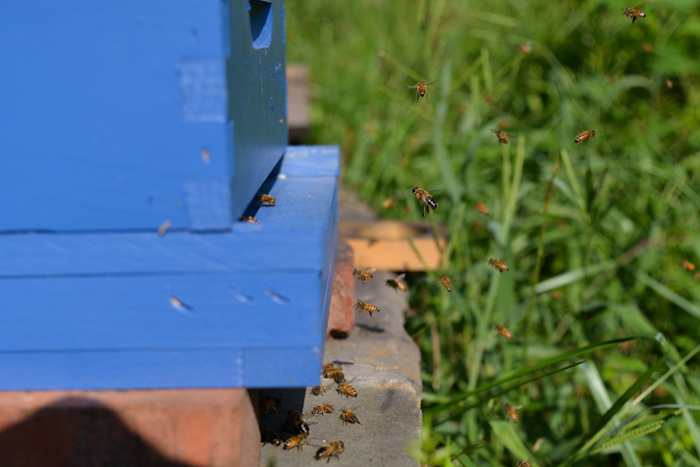 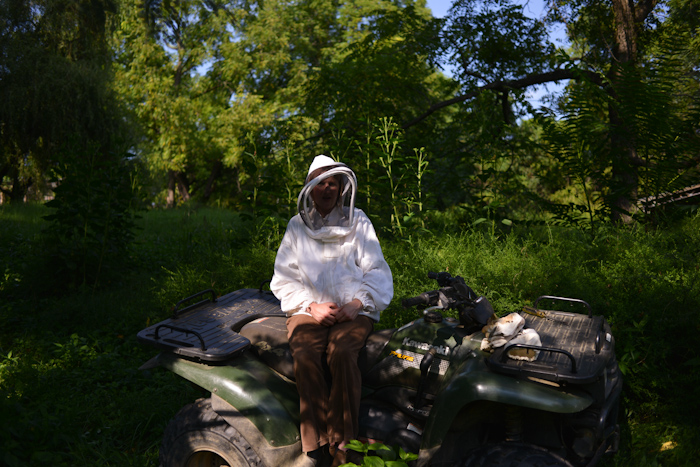 *****
It’s time to re-combine the colony of bees that we split about a month ago.  Only one of the colonies ended up with a queen, which is exactly why we split them, to give ourselves a greater chance of ending up with at least one.  Jonny has his new blue hive painted and ready to go and a plan formulated in his mind.  He’s excited.  We’ve been waiting all week.  We love this beekeeping stuff and we love doing it together.  But, everything changes early in the week as we realize that I have developed a painful (but not dangerous) condition that is going to severely limit me until our baby is born.

He keeps asking me, do you think you can try to walk down with me?  He knows I shouldn’t, but doesn’t want to just leave me out.  I don’t want to look at him, don’t want him to see that I’m crying again.  I don’t want to admit that I can’t walk that far.  I don’t want to miss it either.  I simply tell him, “Go light the smoker.”  A few minutes later I muster up my courage and Jonny helps put my boots on my feet.  That stubborn streak in Keats?  He gets that from me.  It’s admittedly not my most admirable trait.  I shuffle outside and Jonny helps me off the porch.  I make it about ten steps before I have to stop.  I stand there and start to cry.  There’s no way I’m walking down to those bees.  The walk back into the house is too far as well.  I’m stuck.

Jonny tells me to wait there.  A minute later he drives up on the four wheeler.  He helps me sit down (Larkspur runs over to help too) and then, ever so slowly, he drives me down to the beehives and I have a front row seat.
*****

Have I mentioned that I hate to sit still?  That I’m almost afraid to be still?  That I usually suffer from depression every year as the season shifts from summer to fall and I combat that with activity?  So this walking really hurts thing is scaring me.  But mostly, I am keeping my perspective and relying on my belief that God will carry me through this and He knows what He’s doing.  I probably need to sit still and pay attention like a hyperactive child (I was a hyperactive child) who can’t seem to stop-but needs to.  I confess that I have been hearing that voice for months–“You’re going to have to slow down this time.”  And I have, I truly have.  I just didn’t expect to have to slow down this much.

The very day I realized that what was going on wasn’t going to let up, but would in fact most likely intensify over the next two months, my friend Ann had Joni on her blog (And do you see the “Yarn Along” photos in that post?  It was Wednesday, after all, and those photos along with Joni’s words really lifted my spirits.)  Joni has been in a wheelchair for decades, and I’ve known her story since I was a little girl.  Her question in the words she shared on Ann’s blog  isn’t “Why, God?” it’s “How?” And that is just what I’ve been asking.  How to take care of this family until our baby arrives?  I’m not going to complain, and I’m going to do my best not to despair.  I’m going to trust.  I’ll take things one day at a time and accept that there will be low moments, but that they will be offset by all the good, because there’s so much good…

Beatrix tells me, “I love you so much, mommy!  I especially love you when you’re pregnant!”

Larkspur starts randomly rattling off a birthday wishlist (her birthday isn’t until March.) I forbid her to keep talking about her next birthday because eight is just too old.  She laughs and continues her list. “I want a grapefruit and a grapefruit spoon….”  Silly girl.

And then there is Silas.  He’s the best reminder that these months will fly because I remember when he was my new baby and now he’s talking in sentences.  Jonny and I must look at each other and say “He’s so cute” a million times a day.  You know that phase, when every single word that comes from their mouths is adorable?  At bedtime, as soon as the lights go out he tells me, “Jesus, mommy.”  That’s my cue to start singing, “Jesus loves me, this I know”  I’ll sing it and he’ll chime in at the end of each line.  When I finish he demands, “More Jesus.”  So we sing,  more Jesus, and I know He’s going to carry us all and really what’s two months in a lifetime?

p.s.  I feel I should mention that I am really okay, and the baby is fine.  I am just hurting, and the only real relief comes from lying down on my side which is obviously not the most practical position for a mom of six to be in.  I am able to walk for short stretches at a time, but too much and it becomes so painful that it brings me to tears, so I am avoiding it as much as possible.  I am seeing a chiropractor regularly and doing everything I know to take care of myself.  My three big boys are helping out a lot, doing extra chores and taking on more responsibility.  Jonny is learning the layout of the grocery store, and continuing to be super dad, all the while facing his busiest month of the year at work.  And I’ve got a good handful of friends who are plotting and planning, knowing that I’m not good at asking for help, ready to step in and help fill the gaps for us. 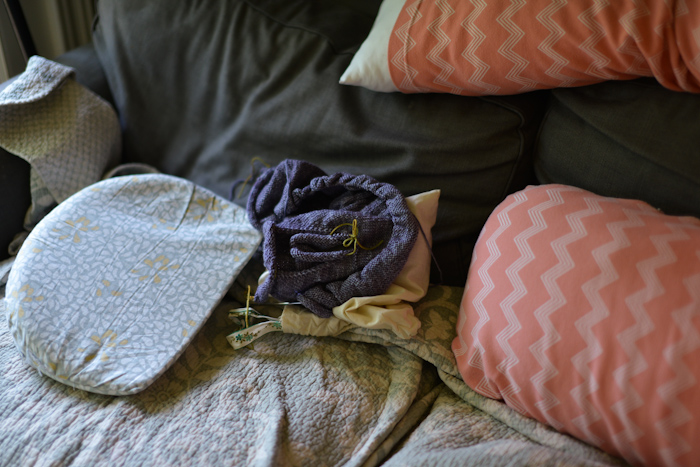 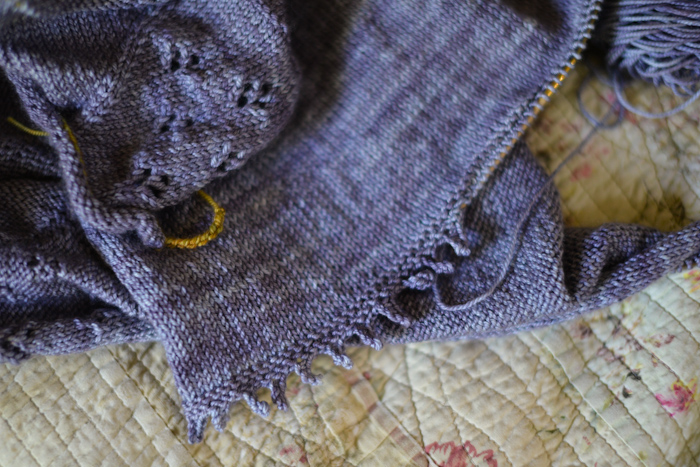 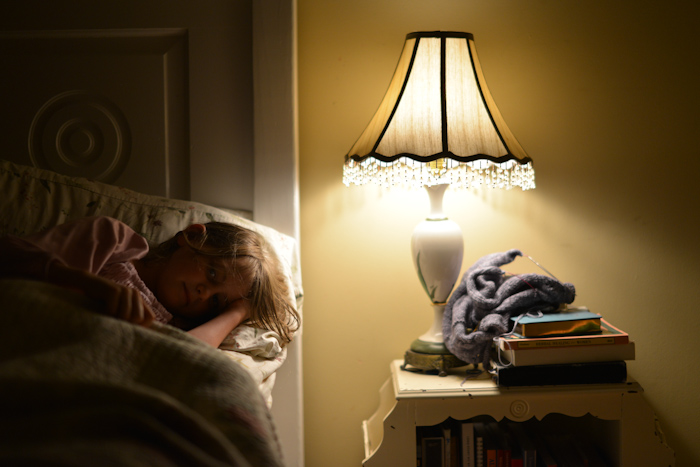