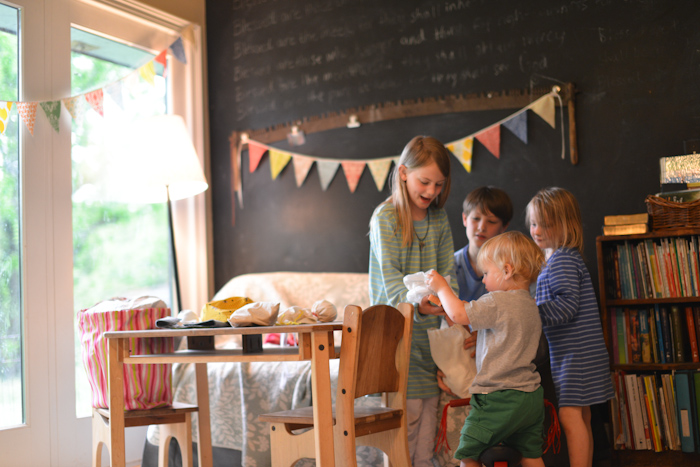 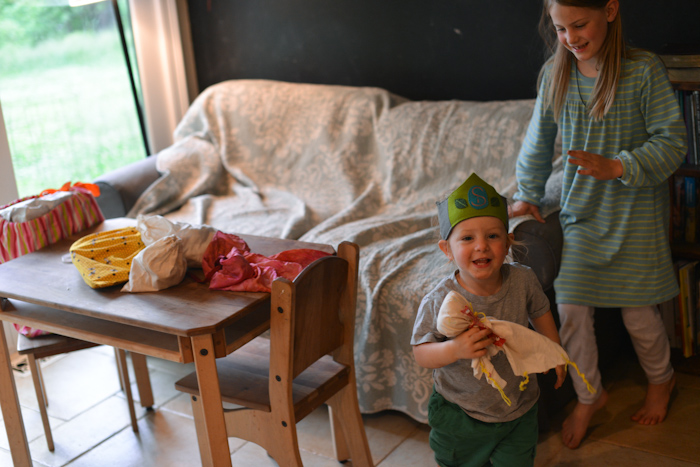 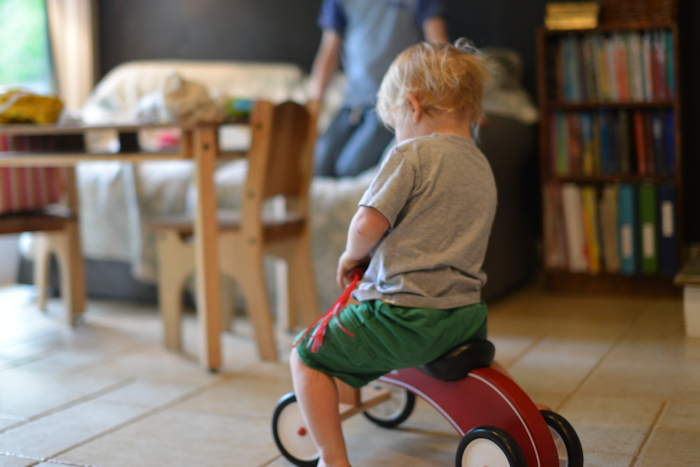 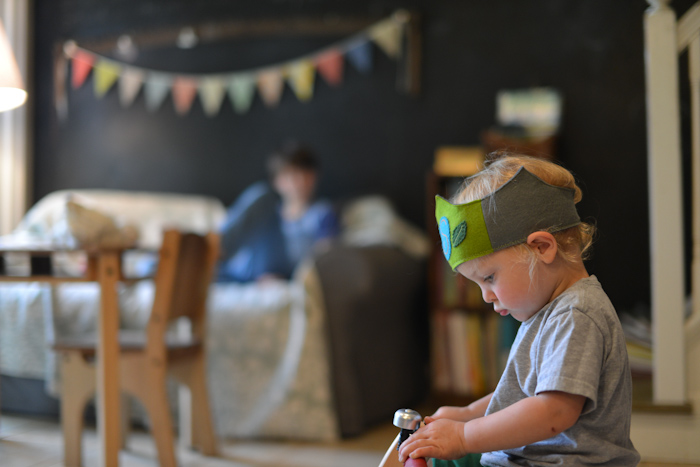 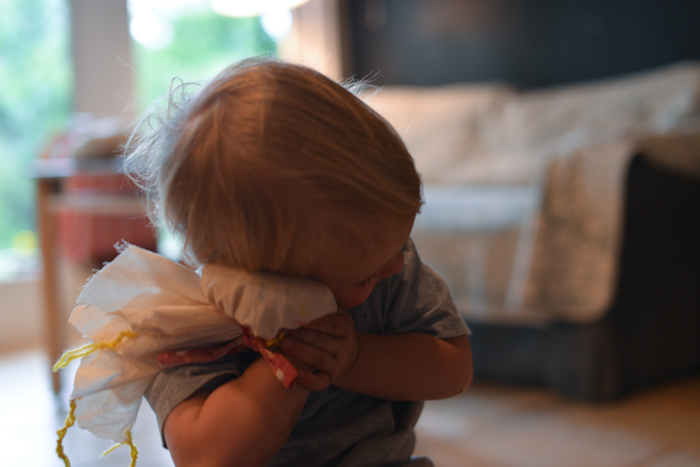 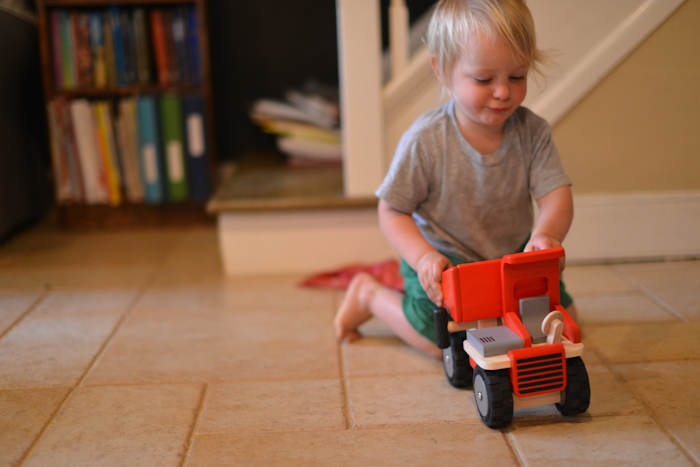 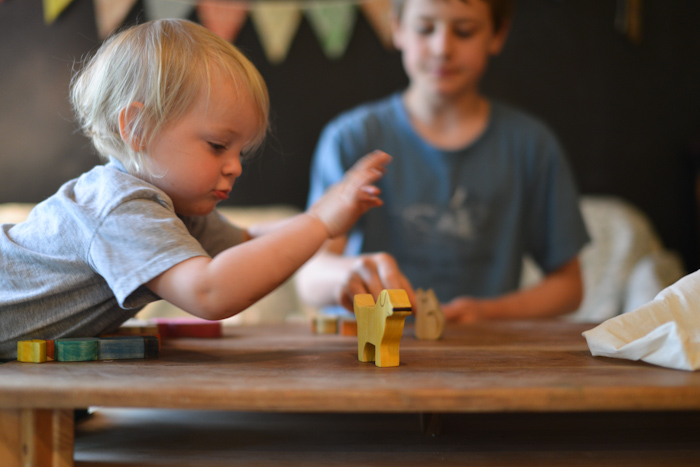 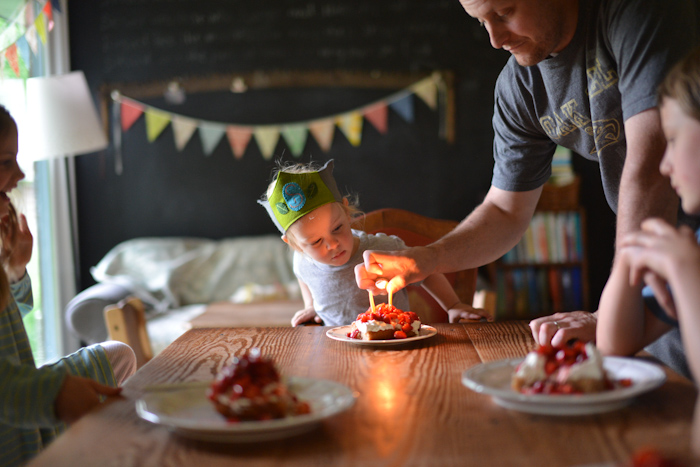 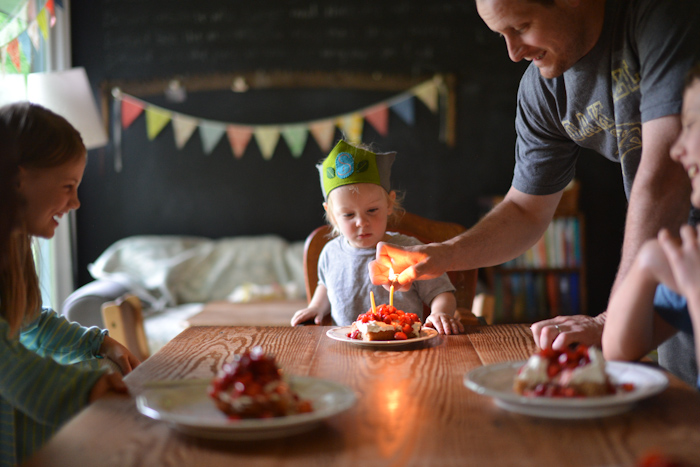 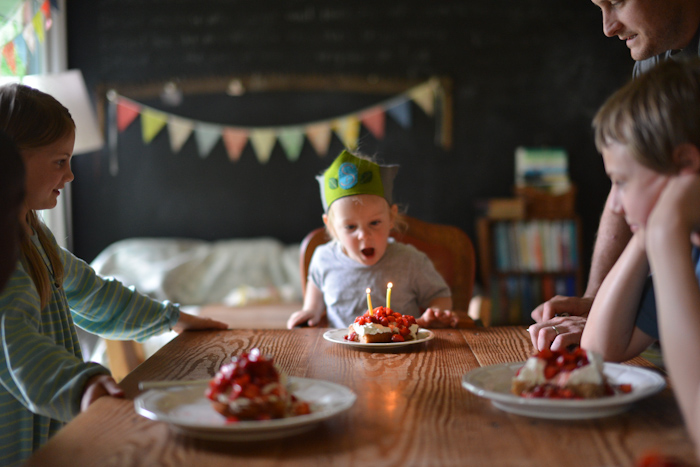 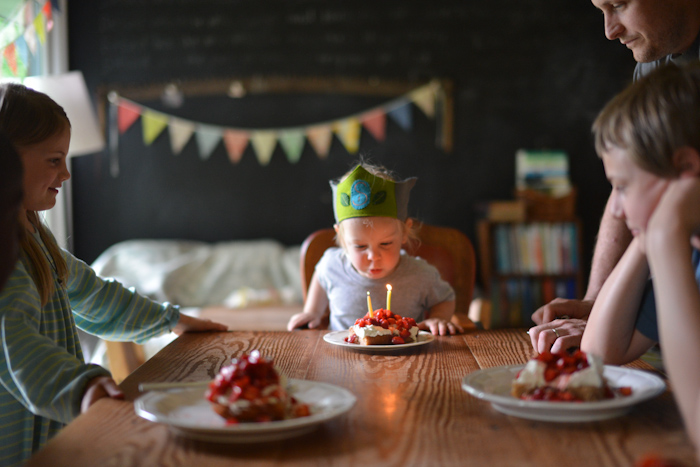 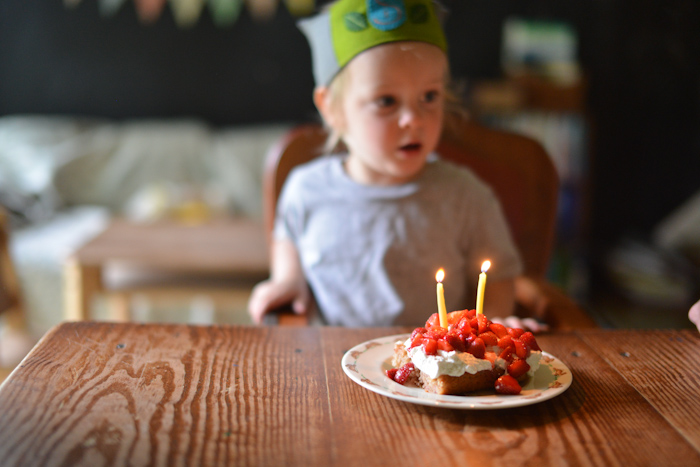 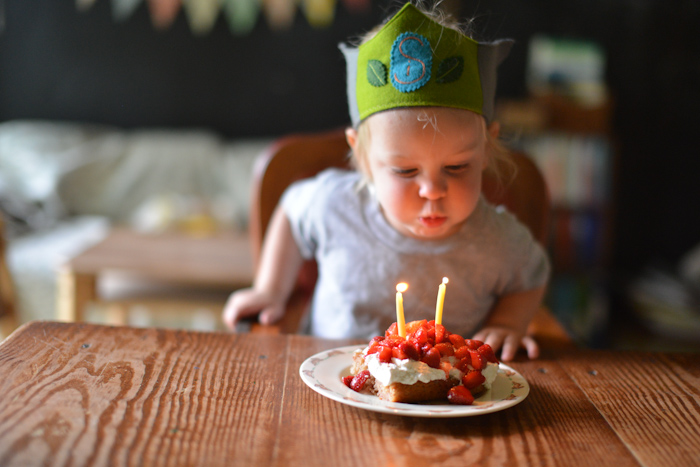 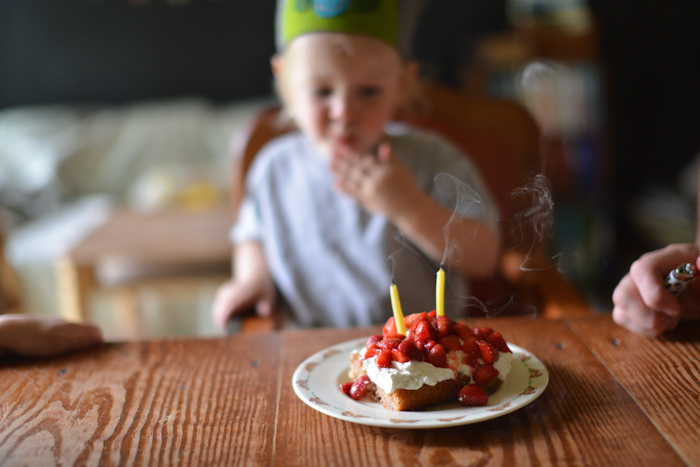 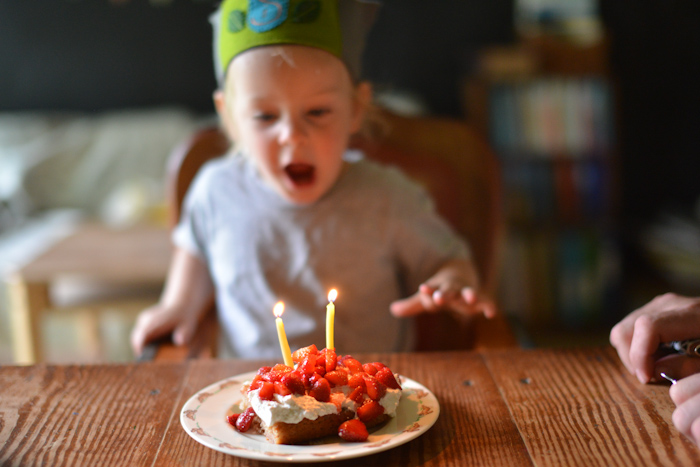 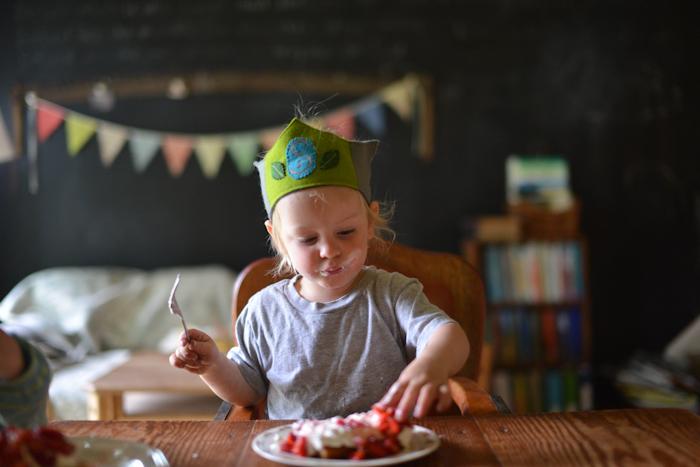 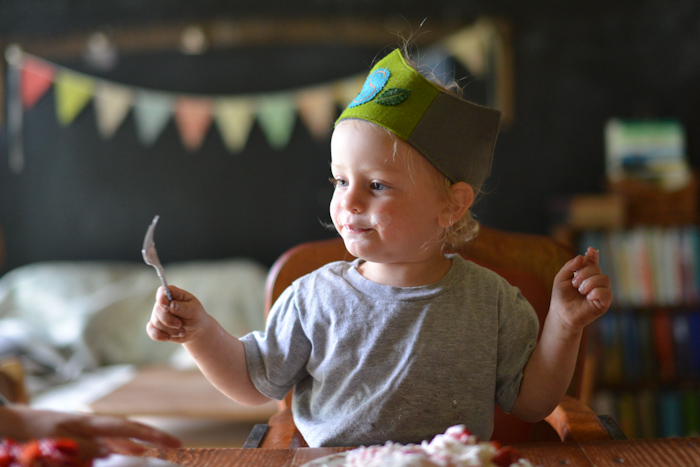 Silas Lolek turned two last weekend. We were traveling at the time so we waited until this week to celebrate. The girls thought it was horribly unfair that we waited, but Silas didn’t seem to mind.  While he is probably the busiest, most active toddler that Jonny and I have ever had, keeping us constantly on our toes, he is also the happiest and easiest to please most of the time.  Silas, whom we call Lolek or Lowly just as frequently (along with a host of other names) is the most affectionate child I’ve ever had.  When I enter a room his face lights up and he races to me so that I can pick him up.  The tone he uses when he calls me “Mommy” is similar to the one you might use when speaking with the greatest affection to an adorable baby or maybe a puppy even.  I should record him, so I’ll never forget the way he sounds when he says it.  This won’t last forever.  I’ve never had a child talk to me the way that he does, as if I am the dearest thing in the world to him.  While he does hug and kiss everyone, I am the only one who gets the extra special treatment.  He cradles my face in his little hands, gives me a look that I can’t describe while saying my name, “Mommy,” and then proceeds to kiss me, sometimes over and over again.  It’s precious and hilarious all at once.  He makes me laugh so much.  He makes us all laugh.  He’s a treasure through and through, even if keeping up with him can be exhausting.

On the day of his birthday celebration we picked strawberries from the garden and made a simple strawberry cake with whipped cream and strawberries on top.  Having a birthday during strawberry season is awfully nice.  Jonny lit Silas’ candles over and over again, until finally Silas tired of blowing them out and started eating.  At some point we realized that we had forgotten to do “Praises before presents,” so we paused in our eating to share all of our favorite things about Silas.  We encourage the kids to be specific, but mostly they said things like, “I love Silas because he’s awesome.”

As far as buying toys and gifts for my children, I don’t do much of that year round, so I really love buying birthday gifts.  I especially love buying gifts for little ones who can’t yet make specific requests.  Obviously, it’s more fun for me that way.  I put a lot of thought into the handful of gifts I bought for Silas this year.  My parents know we have limited space and are particular about what we can keep as far as toys go, and they generously send birthday checks for our kids.  I used Silas’ birthday check  from one set of grandparents to buy a little trike

for him.  The big boys assembled it, and excitedly presented it to Silas first.  He loves it, and has been riding it around the house ever since.  His other gift from grandparents was an “inside” dump truck

.  This one will be used to haul small toys and blocks rather than dirt.  Larkspur made him a little soft doll which he genuinely loved, which made her really happy.  Amongst his other gifts were a few board books, which we are having a hard time convincing him to accept.  Silas likes to read the same books over and over again.  Those new books were maybe more of a gift for Jonny and I, desperate for new reading material.  Silas loves farm animals, and imitating their sounds like most kids his age, and I bought him this adorable farm set which I think he will really love once he tires of riding that bike all over the place.  I also discovered these super cute children’s card sets, specially made for young children, a few weeks ago, and bought Silas the alphabet set.  I think these are going to be a big hit.  They are bright and colorful and most importantly, sturdy enough for little hands!  I’ll probably keep them in my purse to have on hand when we are out and about.

So, our baby is two years old now, and probably weighs nearly as much as Beatrix, but he’s still our baby.  We are so grateful for him and the way he fills us, and everyone he meets, with laughter.