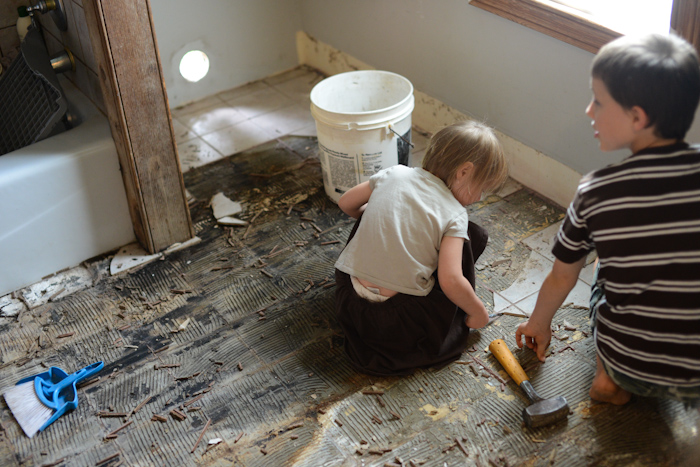 Jonny has just about finished the downstairs bathroom remodel, and we sat down tonight to pour through the pictures I’ve taken of the process.  You’ve seen some of them over the months, but I took pictures of the finished bathroom for the first time today.  Backing up:  our downstairs bathroom is a high traffic area.  It doubles as the laundry room, and is also the main bathroom that our kids use.  When we moved in, it had gray tile with a mauve colored grout. We thought it was nice, and it was.  But after a few years, those tiles started to crack and the grout starting popping out.  Eventually, the floor started feeling spongy underfoot.  We lifted the loose tiles and realized that they hadn’t been installed correctly, which is why the bathroom was now rotting beneath our feet.  We lived with that spongy floor for a couple of years I’d say.  We tried to tread lightly.  With mild embarrassment, we warned our guests that the floor was soft.  The thought of ripping everything out was daunting.  But one day last October Jonny decided he’d had enough, and while I was out doing I can’t remember what, he started the demolition. 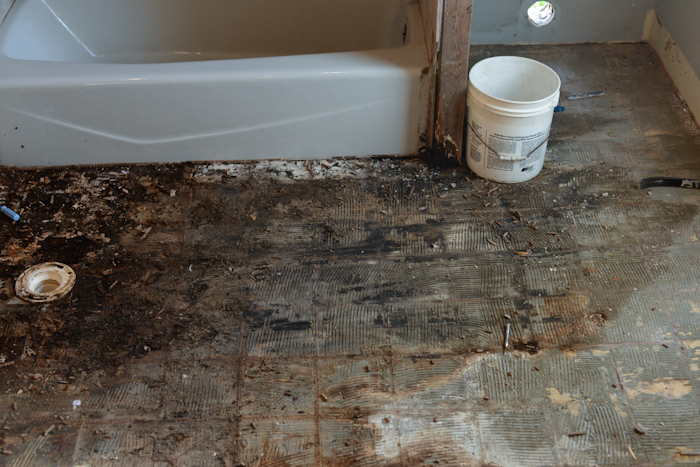 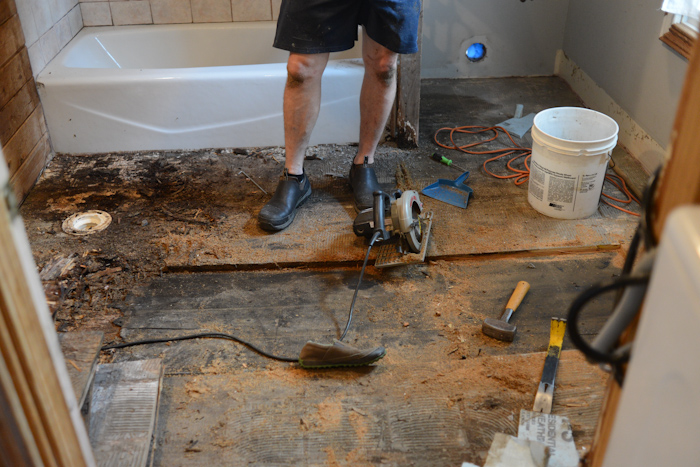 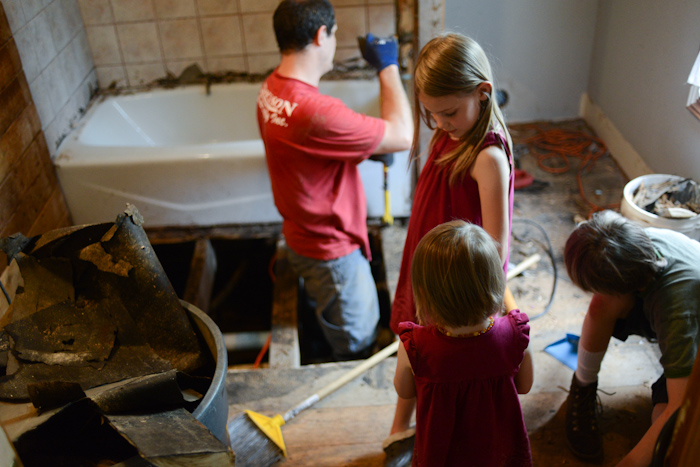 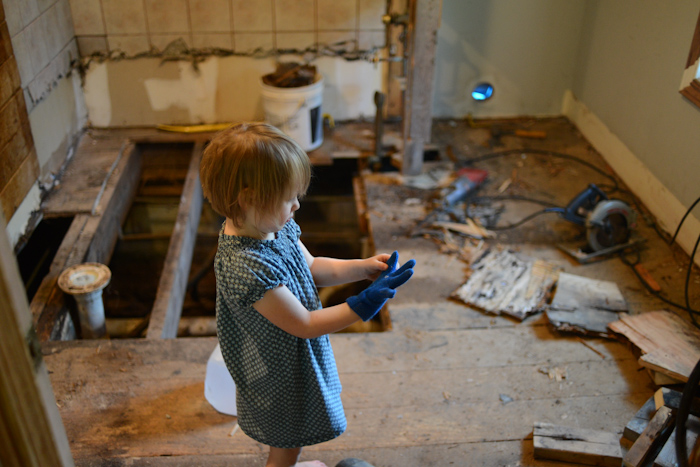 He ripped most of the bathroom floor out down to the floor joists.  Everything had to be replaced. 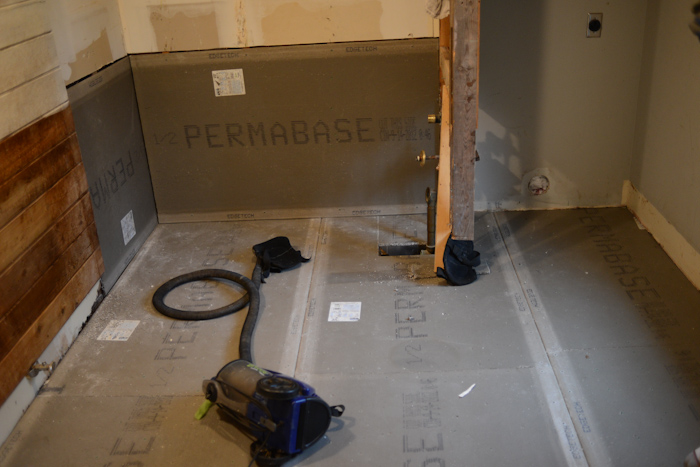 The rebuilding was easier, but took FOREVER. 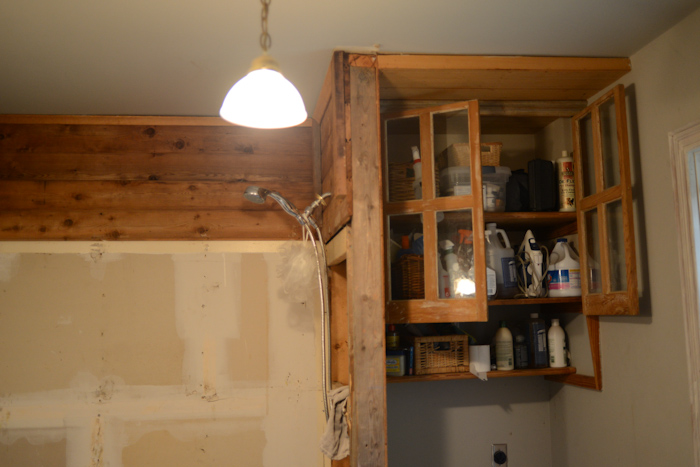 Take special notice of the cabinet on the right. 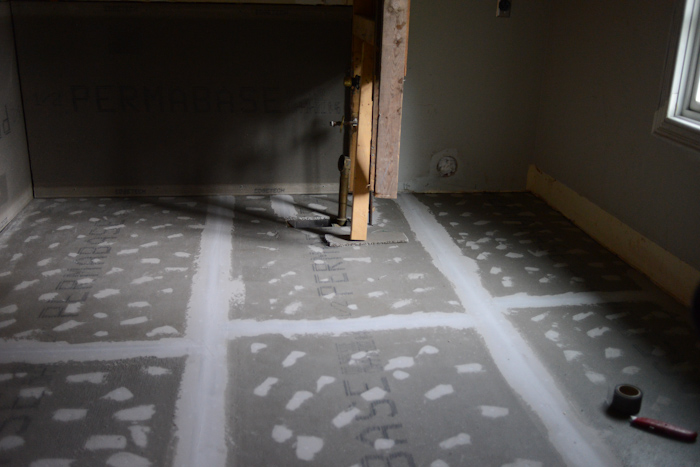 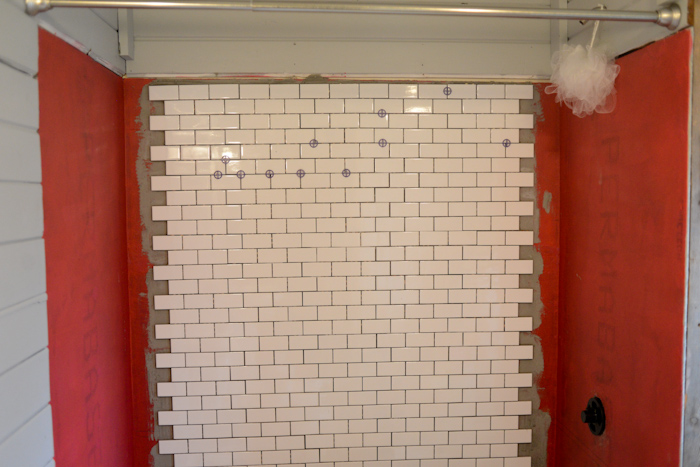 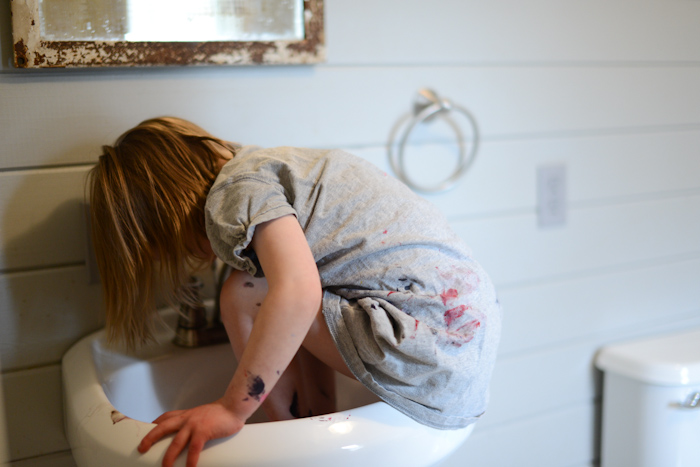 I remember this day.  Beatrix painted her body instead of her paper.  Silas was asleep upstairs where the other bathroom is so I couldn’t take her there.  The downstairs bath was still out of commission.  We made do with the tiny sink. 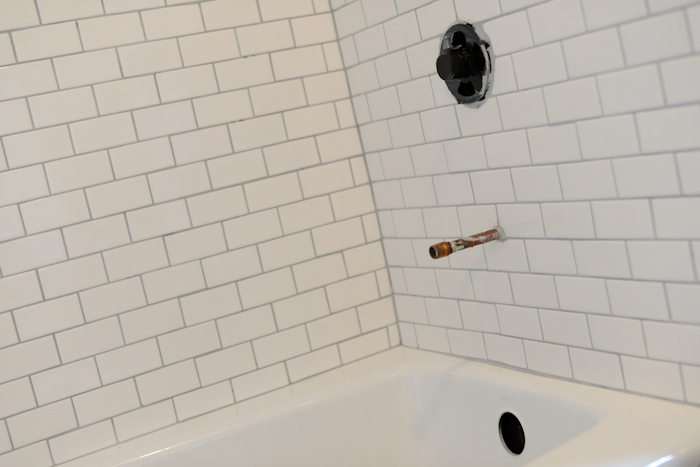 The final plumbing stressed Jonny out a little.  He finally did it thanks to a helpful friend who knows how to solder pipes.  He gave Jonny the confidence he needed to finish that part of the job. 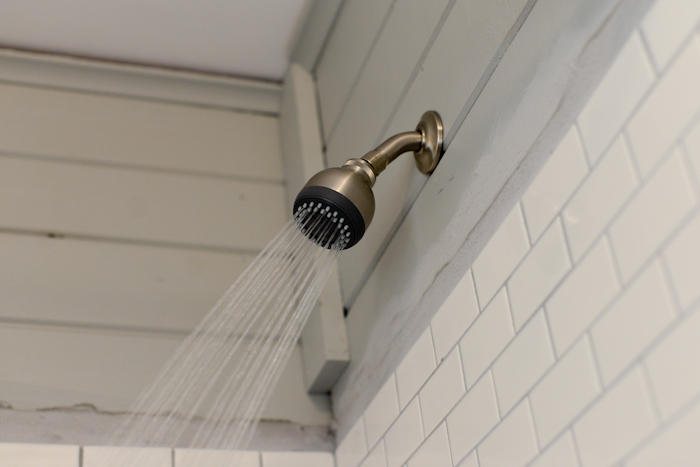 But still, we didn’t make it to the actual running water point until one day in February when Beatrix broke the upstairs shower in a major way.  Jonny was then forced to get the downstairs shower working.  It was great. 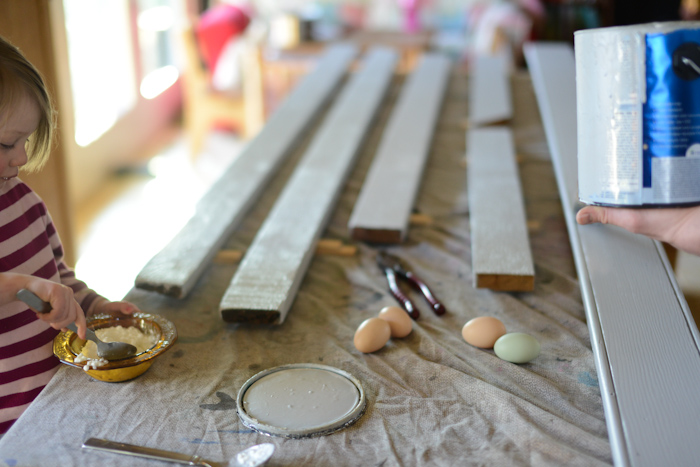 Then it was just a matter of painting and putting trim back in place. 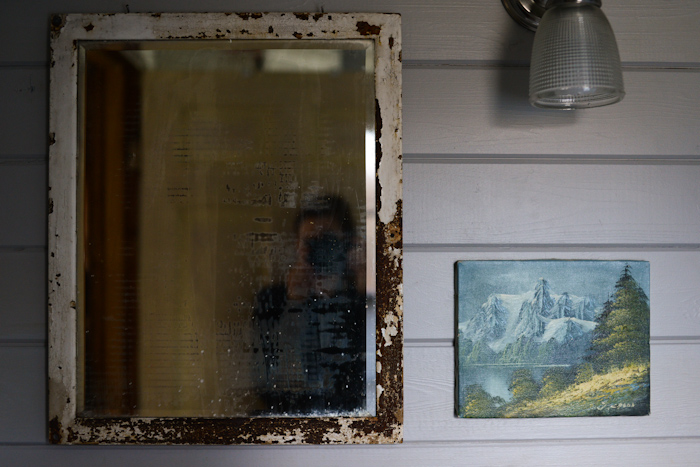 I hung a picture and was happy. 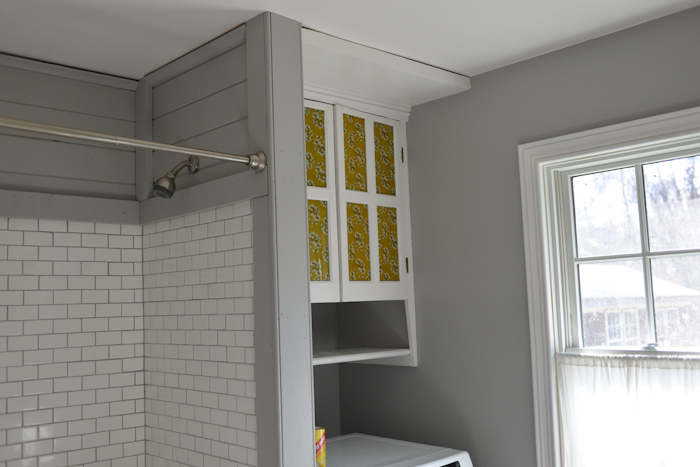 And then one day in March I pulled all the clutter out, gave the almost totally finished bathroom a good cleaning, and took some pictures.  It’s hard to take pictures in a small room, but I did my best. 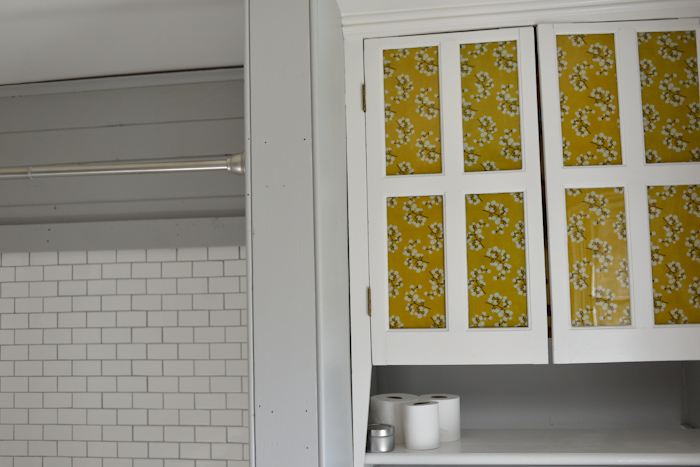 I used mod podge to cover the glass on those cabinets with fabric.  It didn’t turn out perfect, but it’s better than looking at all the stuff in those cabinets.  One of the bottom panels looks wrinkled in the photos, but that is just a reflection.   The fabric was really easy to apply smoothly with the mod podge, but it didn’t dry completely clear in a few places.  This was my first time to do something like this, and I guess there’s a learning curve. 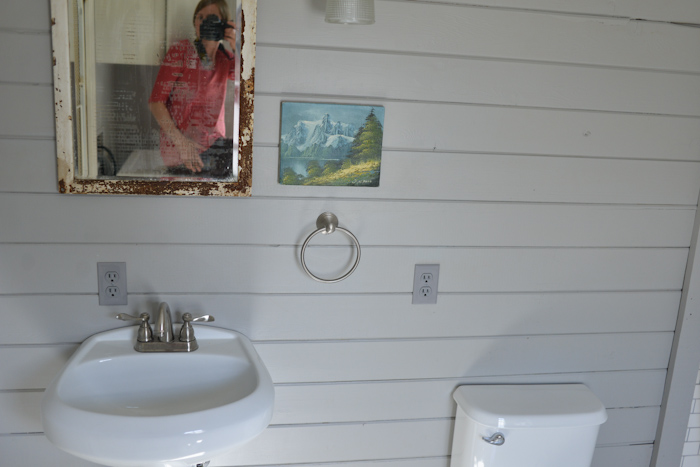 We’ve got a plan for that wall over the toilet.  It’s far too bare. 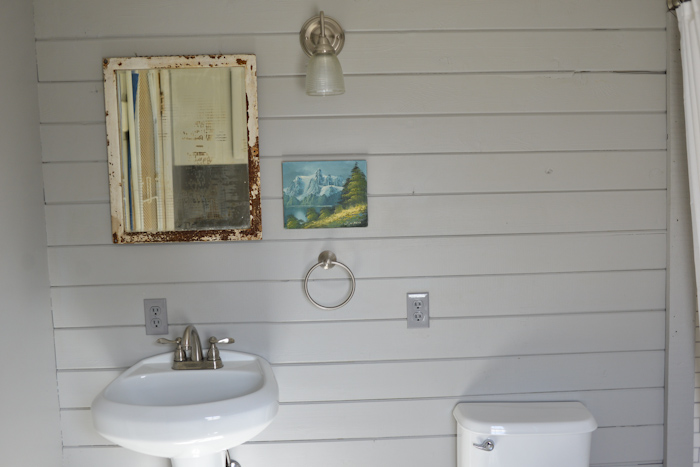 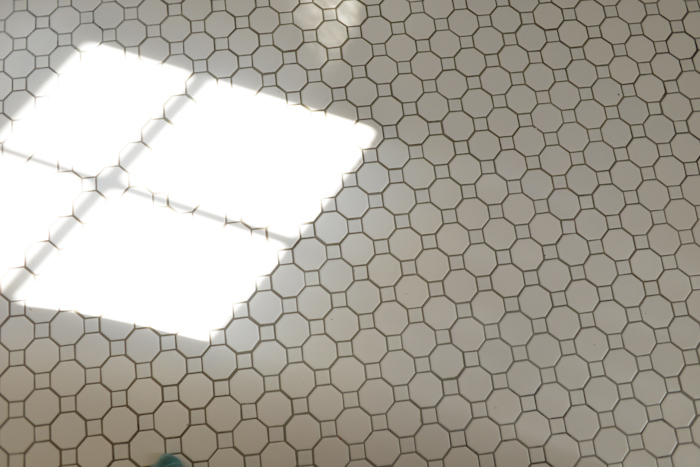 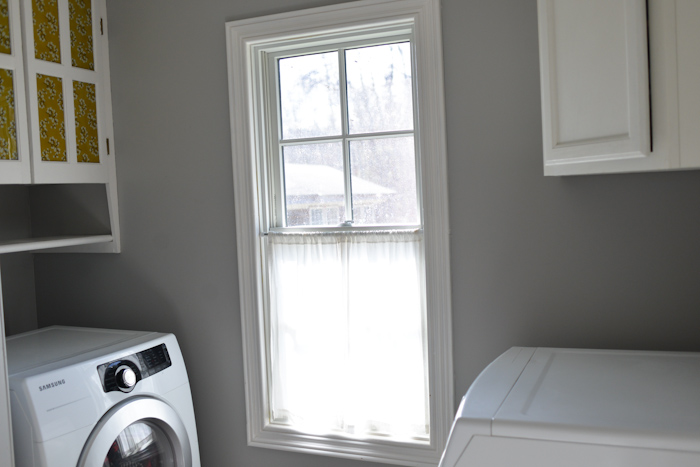 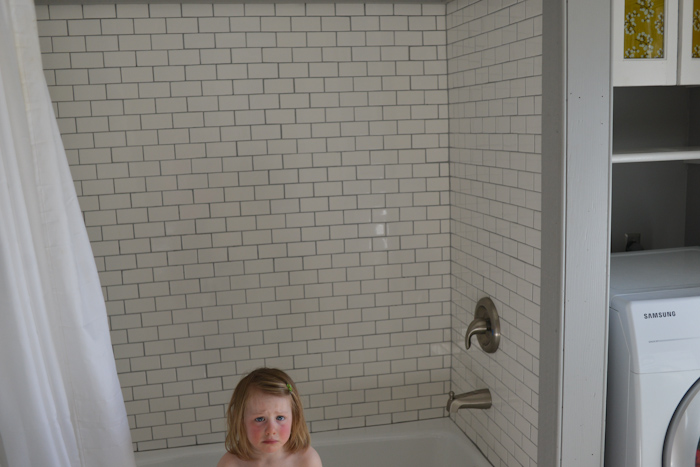 Beatrix arrived on the scene and wanted to be in the pictures.  I told her she’d have to put some clothes on (probably her third outfit or so for the day.)  She didn’t want to get dressed. 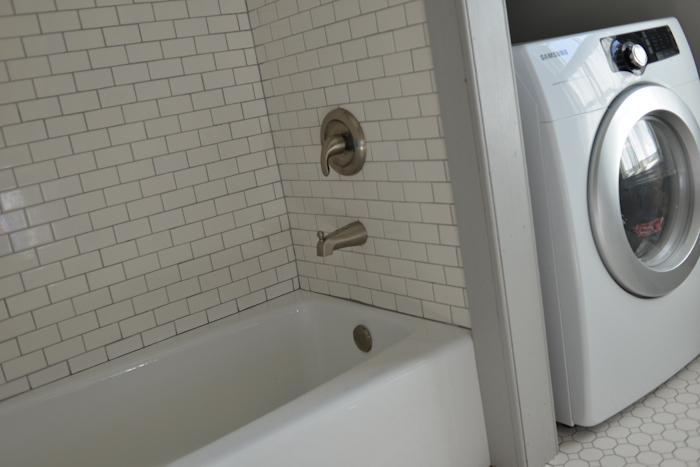 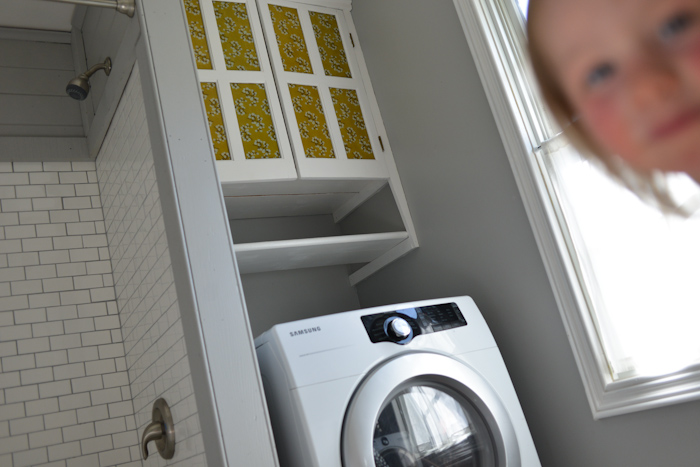 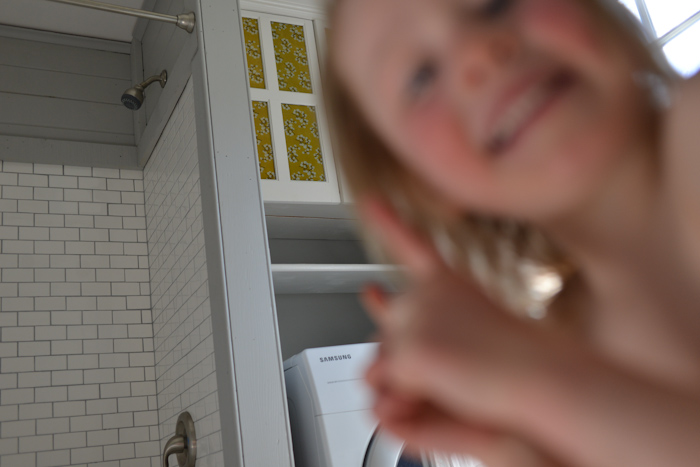 DONE!–Well, minus some new towels (ours are in such bad shape,) possibly a shower curtain beyond the plain white one, and filling that wall over the toilet.  I think that’s it.