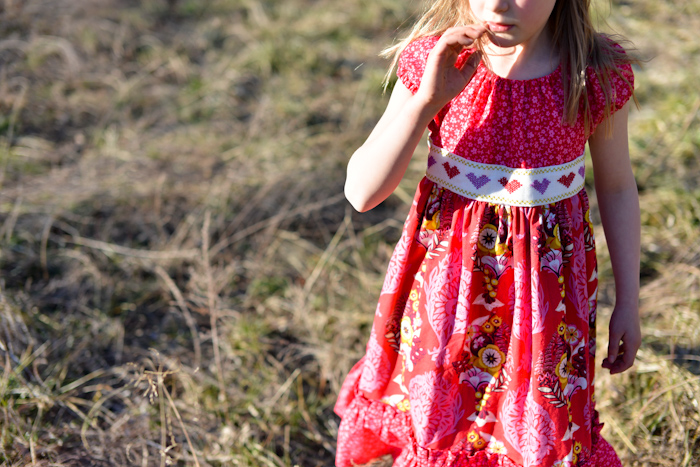 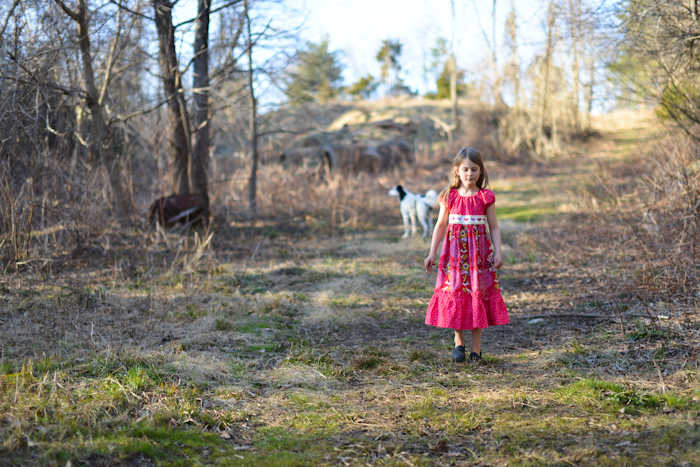 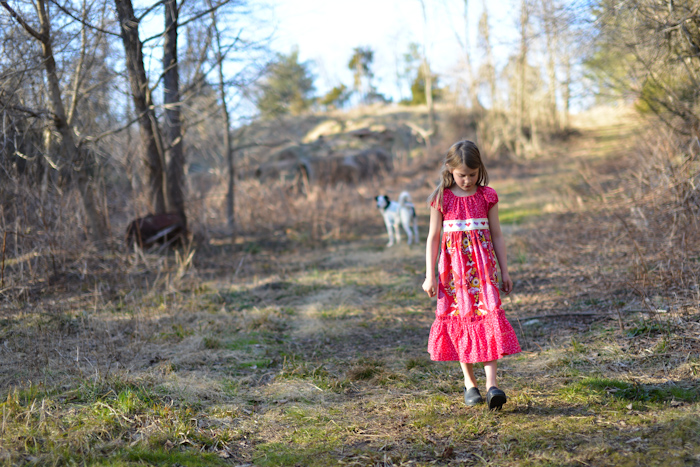 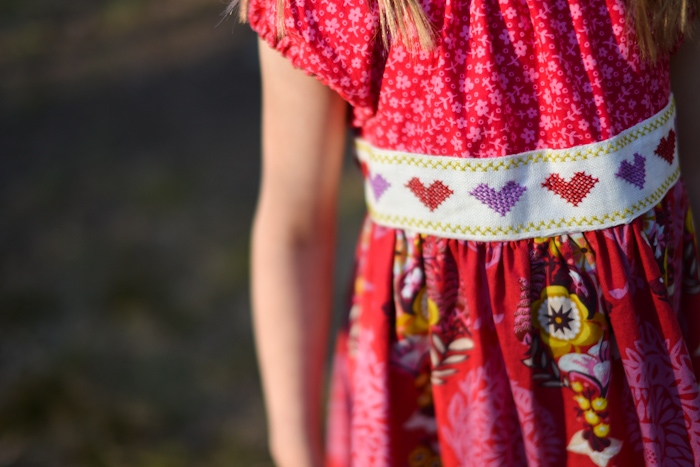 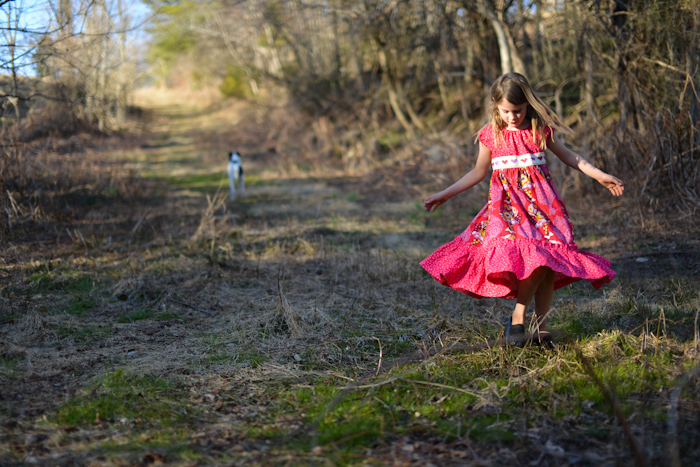 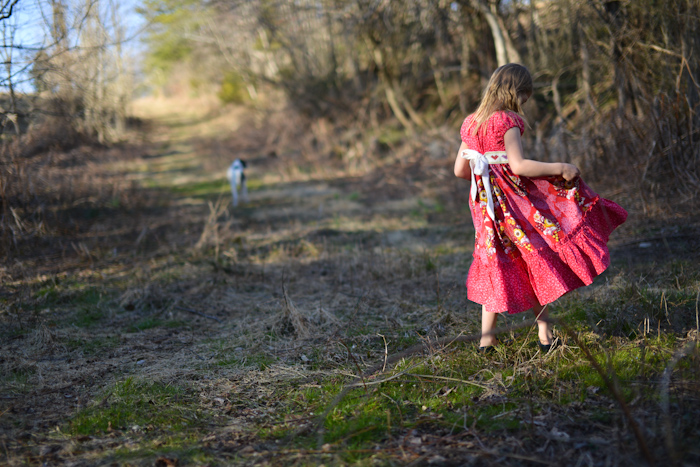 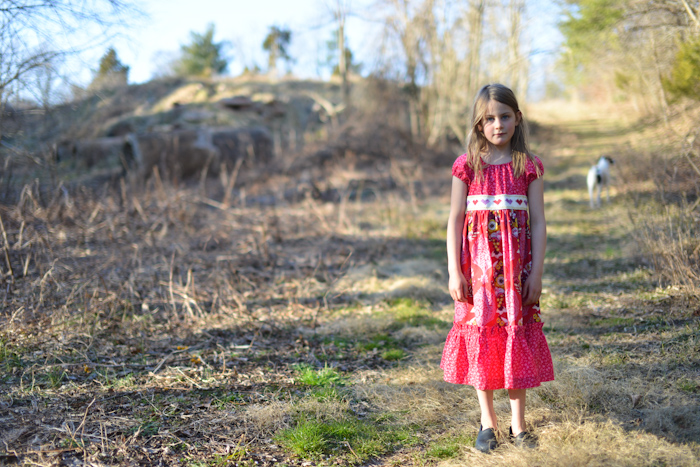 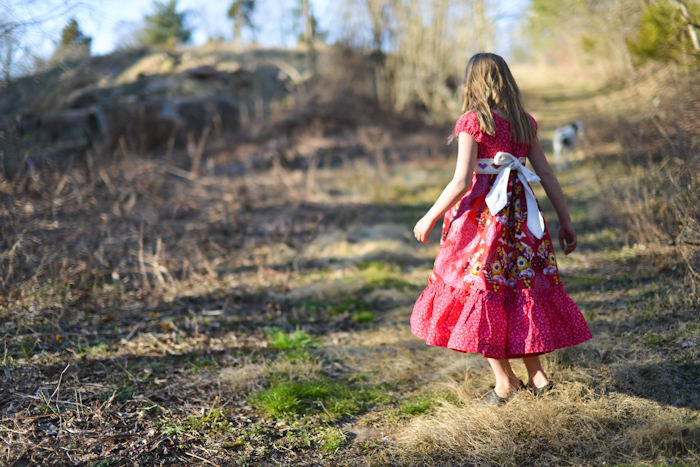 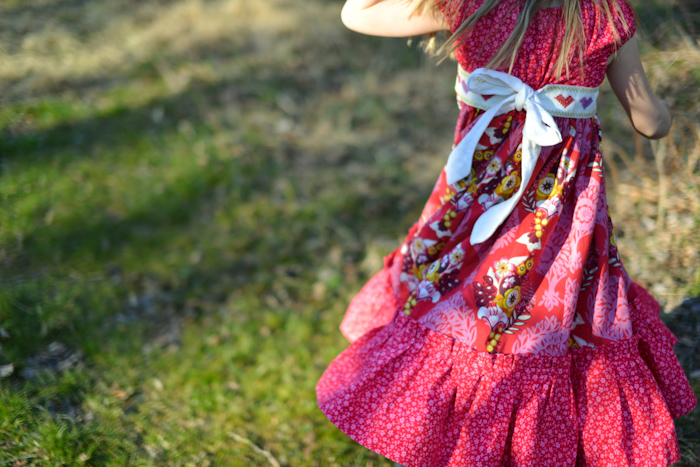 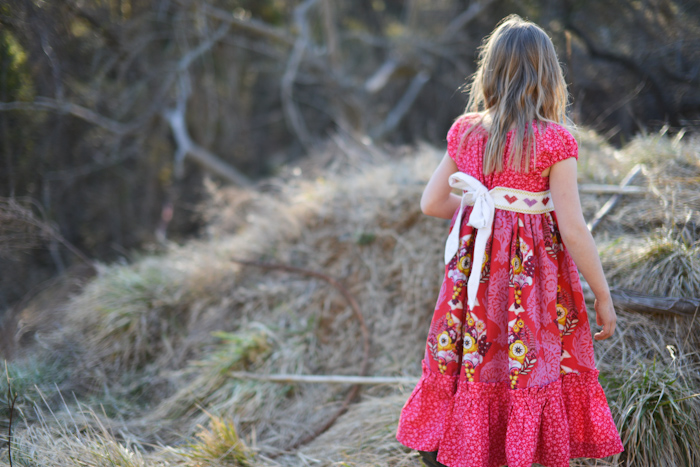 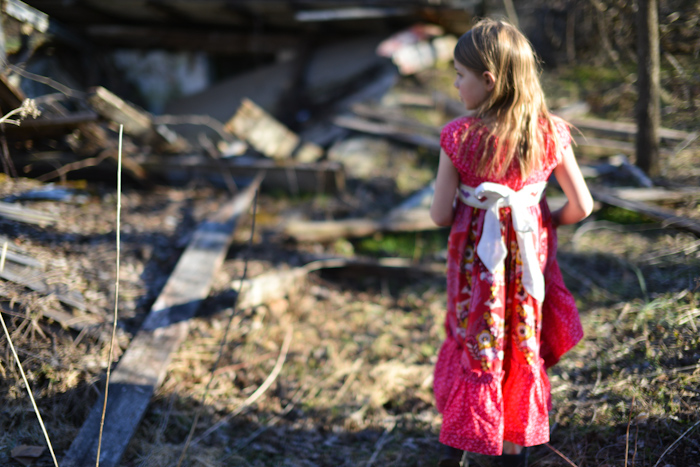 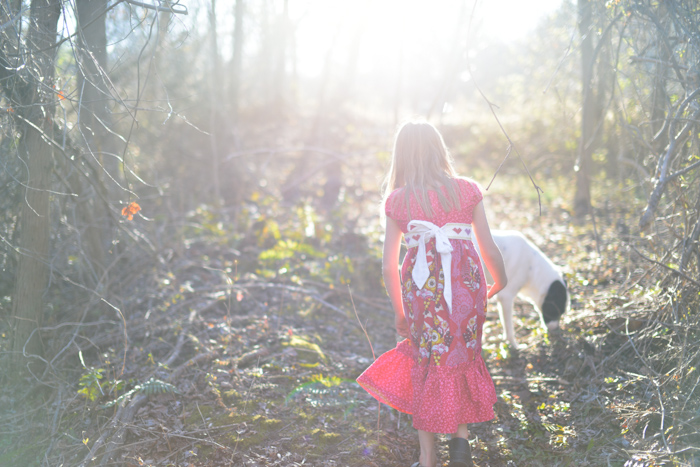 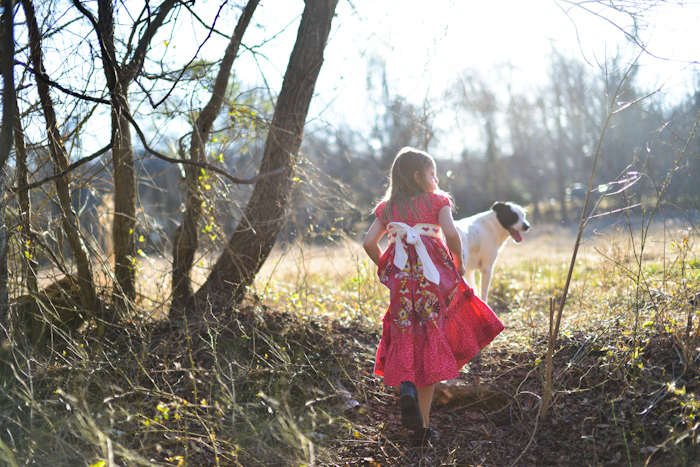 A few weeks before her birthday, Larkspur asked me if she would have a birthday dress this year.  I asked her, “A birthday dress that you can buy at a store, or a birthday dress that I make?”  I confess that I was sort of hoping she would say that she wanted store bought.  Most of my recent sewing projects have turned out poorly.  But of course her answer was, “A birthday dress that you make.”  Okay then.  She also specified the fabric that I should make it out of, some that she picked out last year, but was never transformed into a dress as she had hoped.  The fabric was red with small pink flowers (it’s Sarah Jane-wallpaper flowers) and while it was cute, I was having a hard time envisioning a dress made of it entirely.  I wasn’t enthused.  A few days passed.  Then one evening I picked up a small cut of Anna Maria Horner fabric from her Innocent Crush collection, and realized that it coordinated with the print that Larkspur had chosen.  She wouldn’t mind if I used it too, I thought to myself.  Remembering Anna Maria’s Needleworks Sampler set that I received as a gift from a friend, I started getting excited.  A plan began to form, and I found myself cross stitching a simple pattern that I made up on linen ribbon that came with my gift.  The perfect colors of matching floss were there in the set, and it just came together perfectly.   Larkspur watched me stitching on that ribbon for a week, wondering what it was for.  I shrugged that I wasn’t sure.  She had no idea that it would end up on her dress, although she mentioned lots of times that if I didn’t know what to do with it, she thought I should give it to her when I finished because she thought it was so pretty.  I finished her dress a day or so before her birthday and had her try it on.  There was a white linen sash, but I hadn’t sewn the cross stitched ribbon on yet.  Larkspur knew that there was something missing, because I had told her there would be a “final touch” added that would be a surprise, but for some reason it didn’t occur to her that it was the ribbon I had been cross stitching on!  On her birthday morning when Jonny carried the dress in for Larkspur to see, her face lit up with the biggest smile.  I had spent the previous night after she was in bed, hand sewing that linen ribbon to the sash of her dress.  She loves it, and I’m just glad that I was able to create something that is her style.  Sometimes that is hard for me, because my own style is so different (picture lots of plain gray and brown rather than ruffled red and pink.)  As far as the pattern for the dress itself goes, I made the simple peasant bodice and the sash using Sandi Henderson’s Claire pattern, which is a go-to for me.  Unfortunately that pattern isn’t available anymore.  You could substitute any peasant type bodice, and then add a simple gathered skirt and sash.  I didn’t use a pattern for the skirt or ruffle.  My only complaint about the finished dress is the length.  I would have made it longer had my cut of Innocent Crush fabric been bigger.  I’m not really complaining though, because Larkspur likes it!  This will double as her Easter dress, so I’m pretty happy about that.