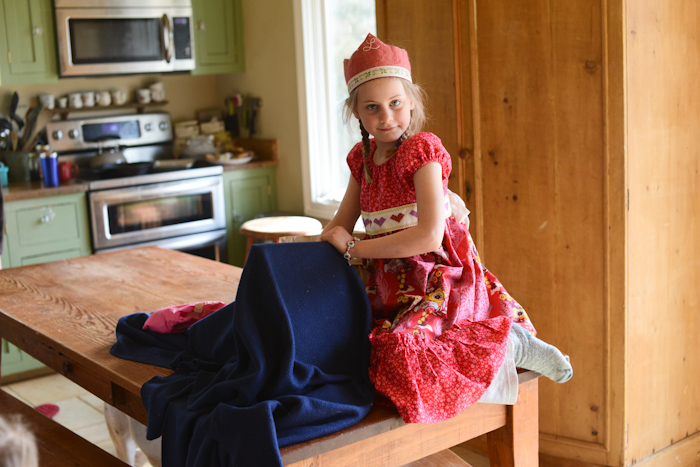 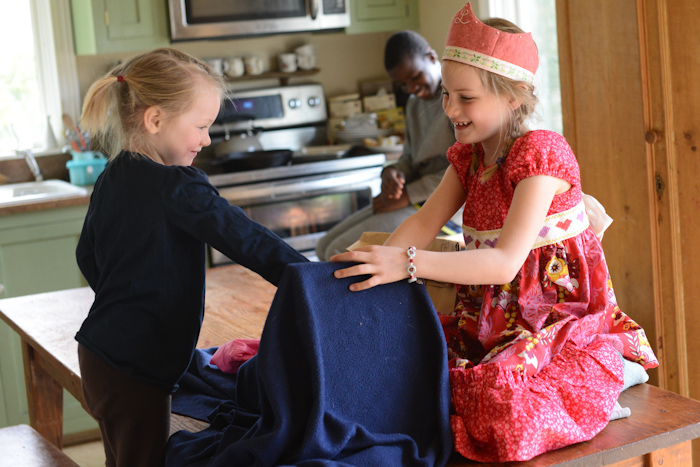 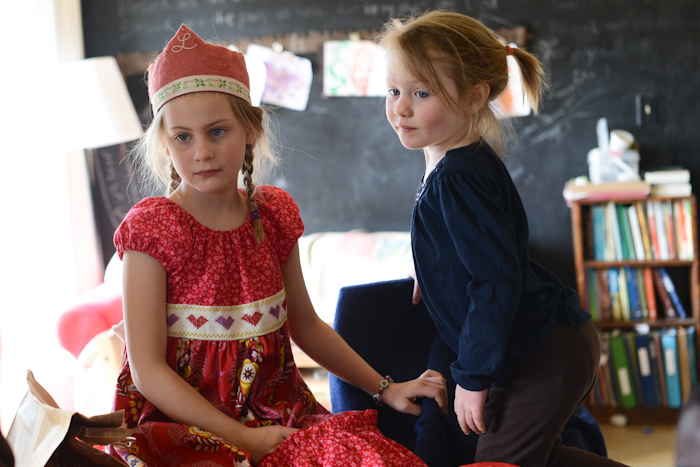 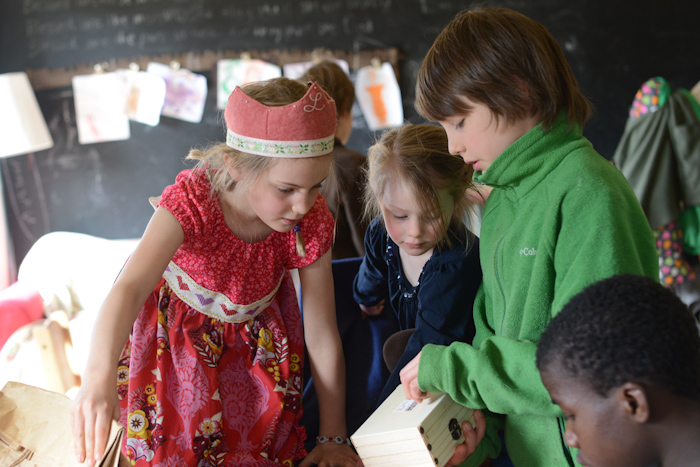 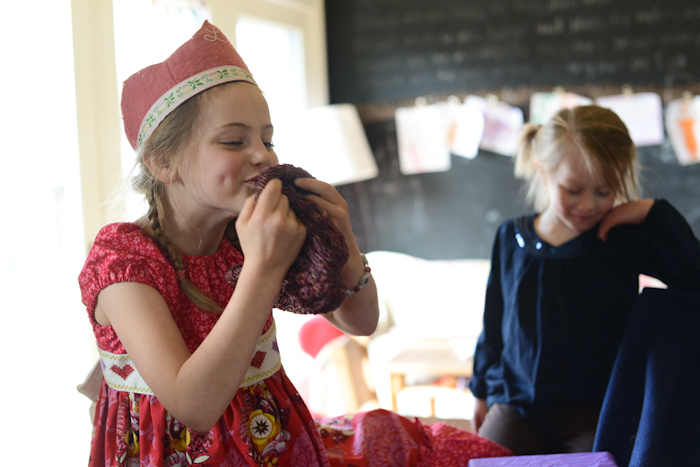 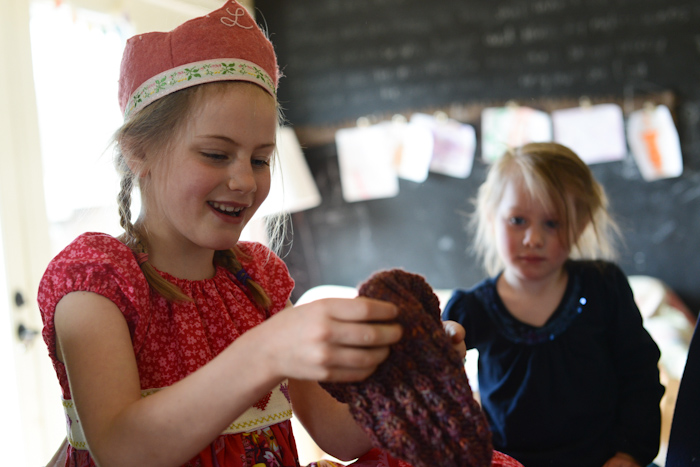 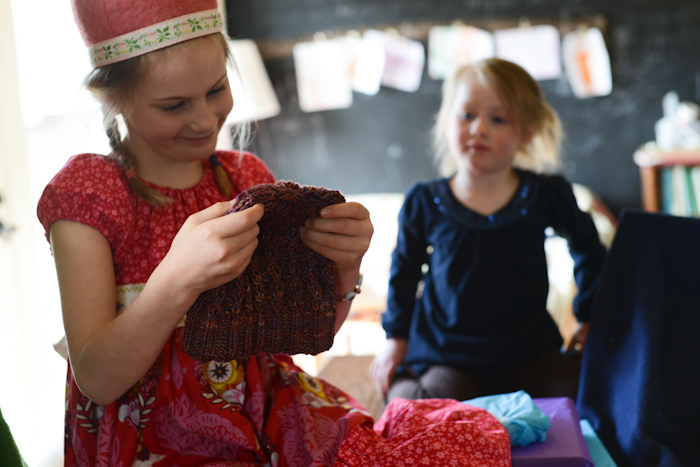 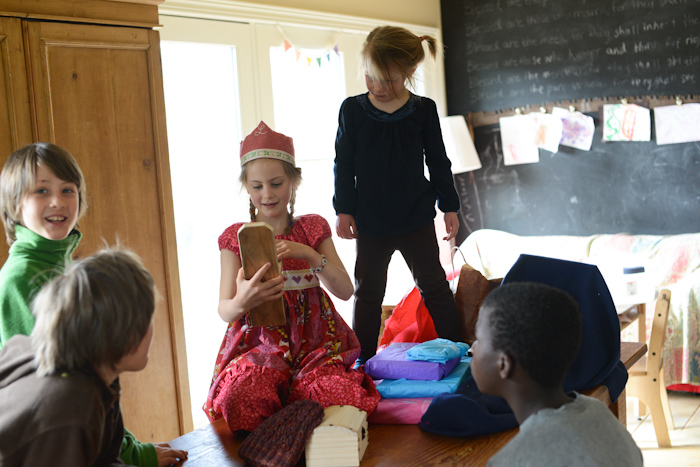 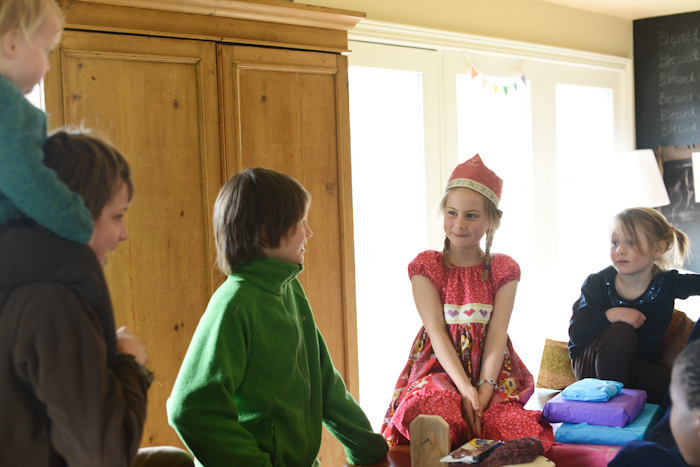 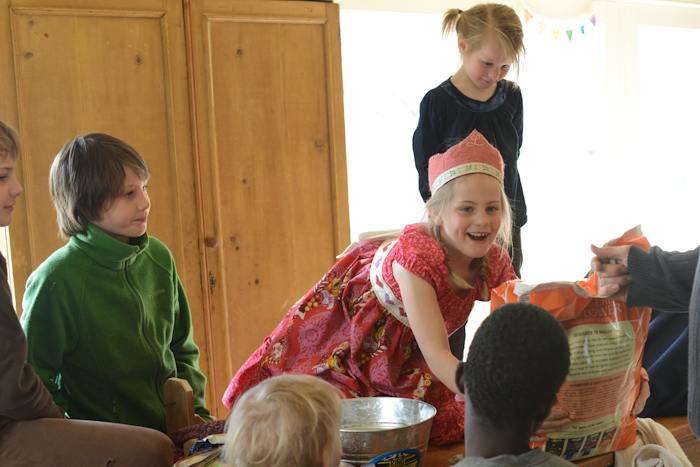 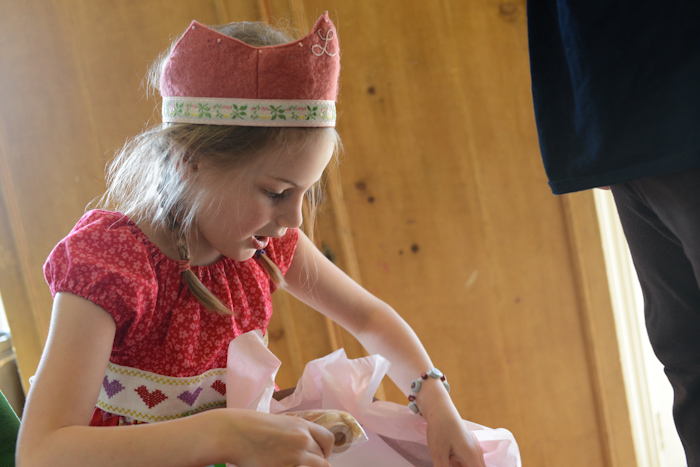 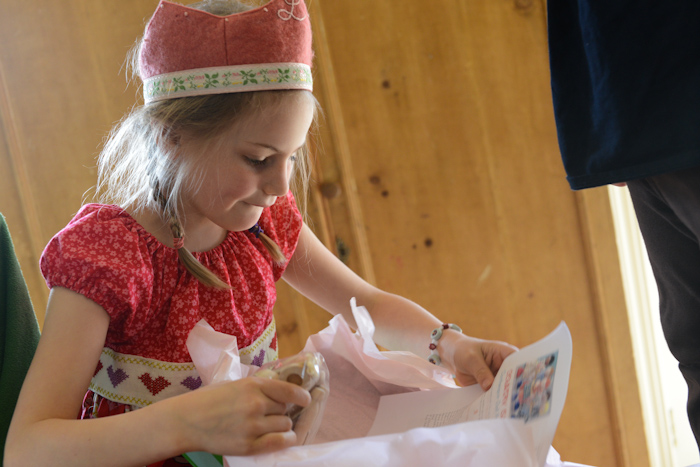 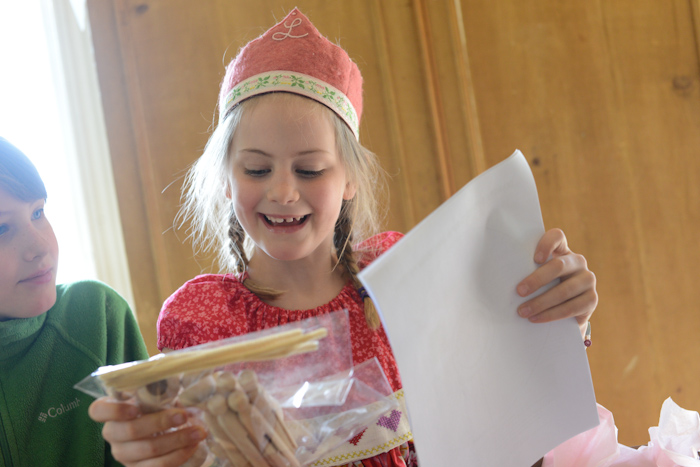 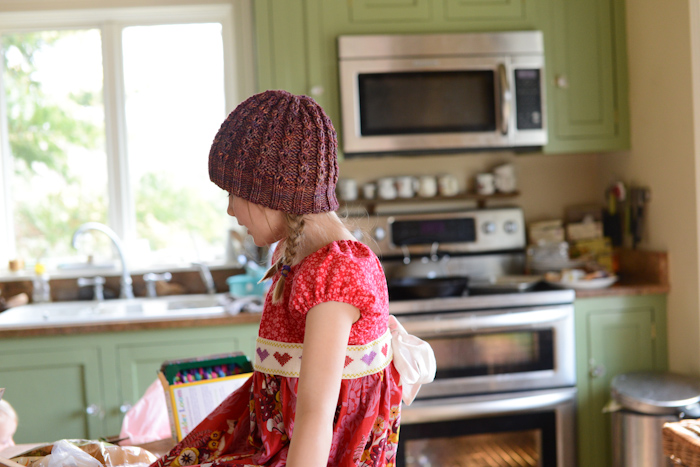 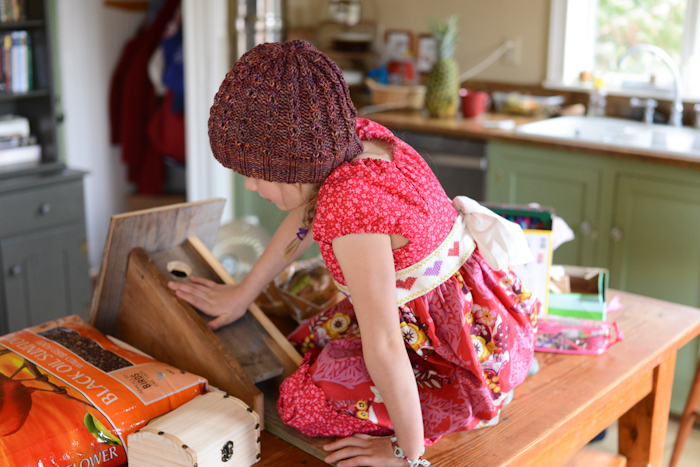 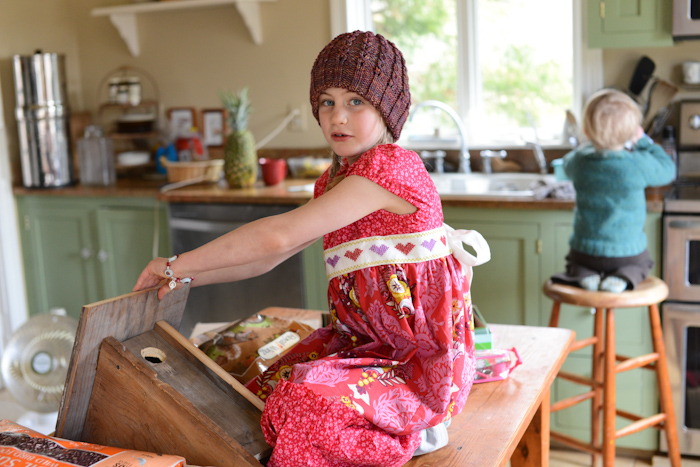 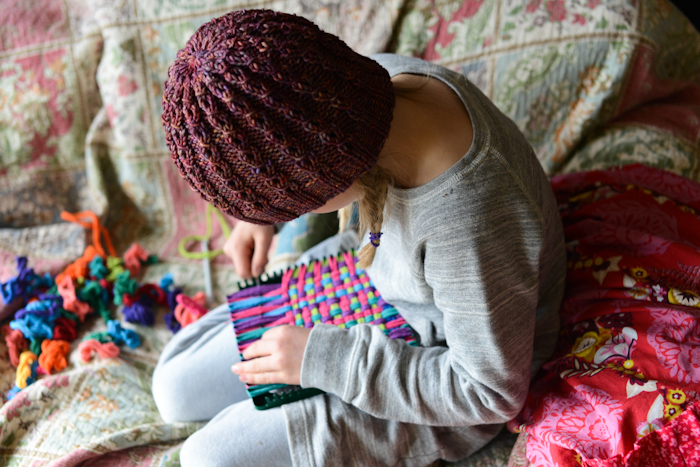 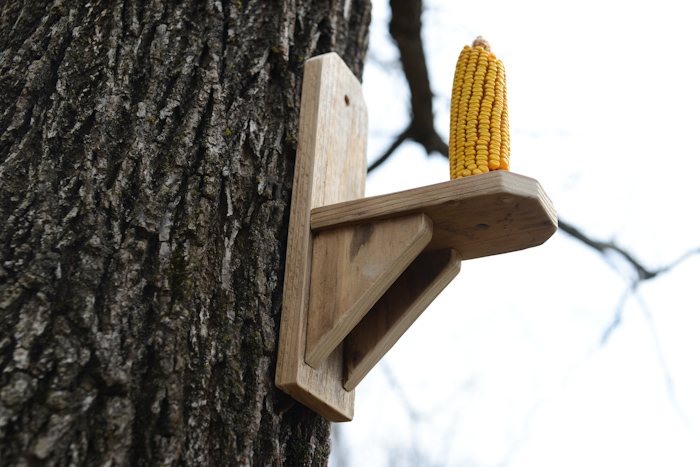 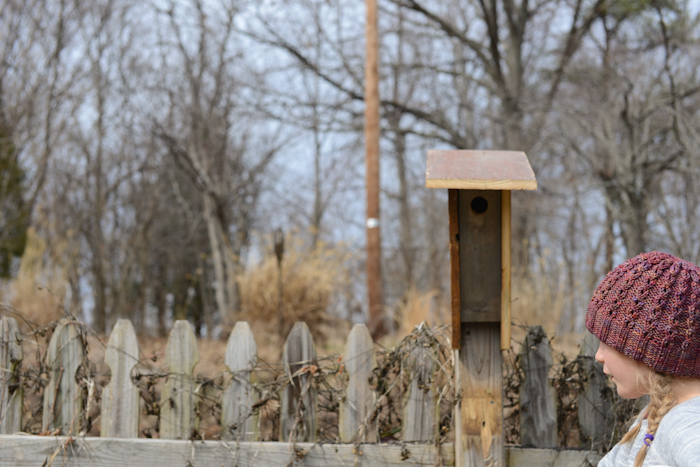 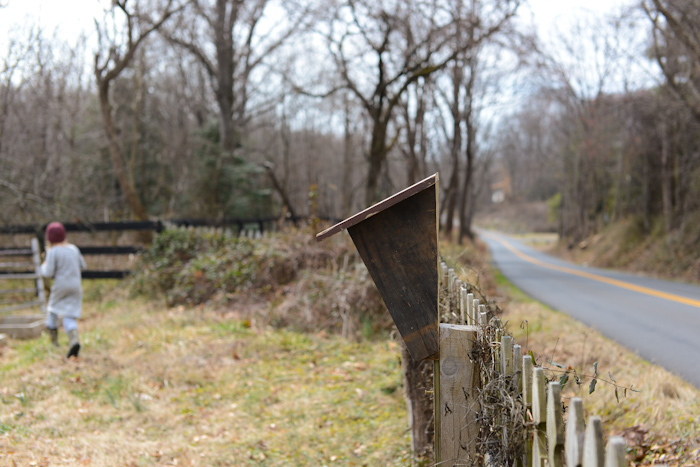 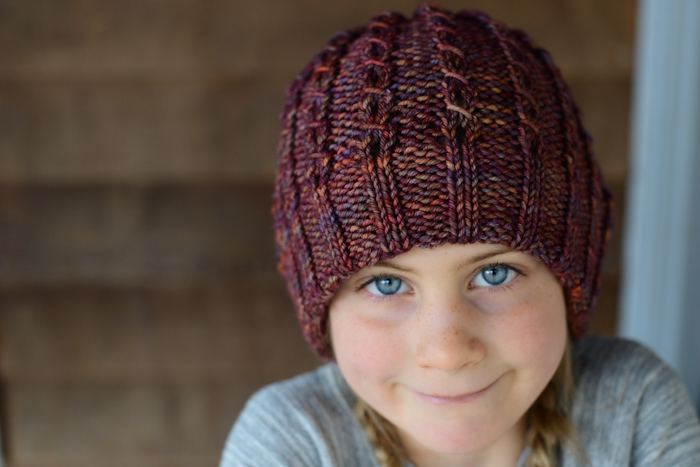 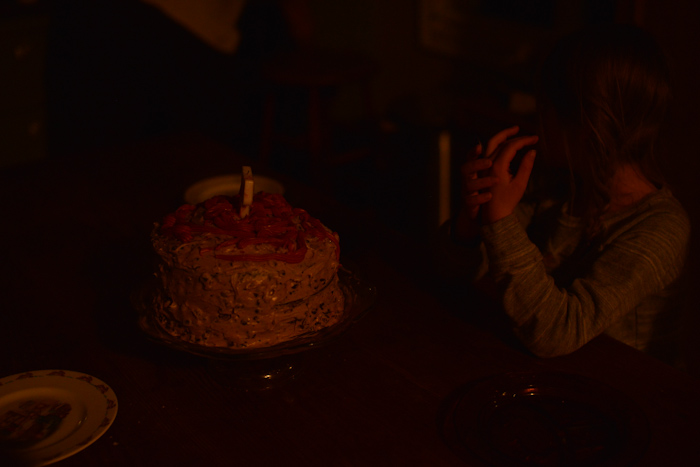 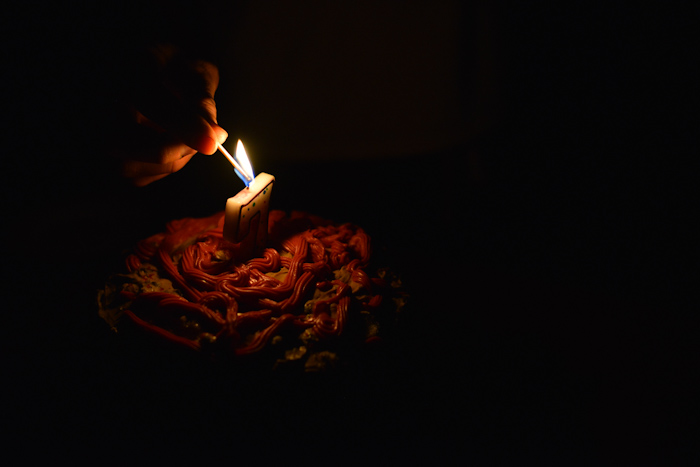 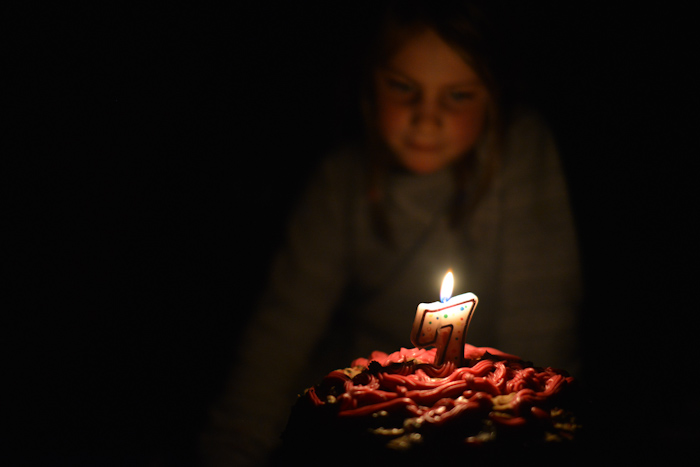 For all the time we spend making gifts for our kids, Jonny and I are always found scrambling on the actual birthday.  Larkspur wanted to open presents after breakfast.  Of course she did, who wants to wait all day?  I had to run upstairs to wrap them first.  This is what happens on every single birthday for every single child, me running upstairs to wrap gifts with odd bits of tissue paper yelling, “Do we have any tape?”  Jonny headed outside to retrieve his gifts, and ended up wrapping them in blankets and paper bags, the blanket probably covered in white dog fur.  We do our best.  The gifts trickled into the kitchen and onto the table one by one where Larkspur waited.  We sternly instructed her not to start opening them yet.  “What’s taking so long?” she wanted to know.  Evidently there’s this part of me that refuses to be totally prepared.  I can spend a week sewing a birthday dress, but I can’t for the life of me wrap gifts before the big day arrives.  It’s become tradition.  The other kids help, and end up doing most of the wrapping, me just instructing them to make sure to layer the tissue thick enough so that you can’t see the gift through the wrapping.

Larkspur’s big brothers all bought gifts for her.  The gifts from older brothers who complain a good bit about younger sisters, they mean the most I think.  Keats helped her make a birthday list, and the boys all chose gifts from it, buying them with their own money.  This part is a big deal.  Two of them are miserly with their money, they want to buy something from the list, but don’t want to spend too much.  The third sees a sewing kit in pink.  That’s on the list!  He doesn’t care the cost.  He knows she’ll love it.  I think about the challenge of teaching my children to be wise in their spending, but generous as well.  My son who knows, I can’t take credit for that.  He learned that lesson through poverty, having nothing for many years.  My greatest fear is that he will lose this gift he was given, the deep knowledge that relationship comes first, in our culture focused so much on things.

Birthday are for celebrating, and we do it in our own way.  Larkspur notes that we aren’t the kind of family that decorates for birthdays.  It’s true.  On your birthday you get to choose all three meals, and your cake.  You get special treatment and gifts.  But, I have yet to create a special birthday bunting, or something of that sort.  That’s okay.  Larkspur wasn’t complaining, she was just stating a fact.  We’re the sort of family who will make a special trip out to buy bagels for the requested birthday breakfast, and then turn around and wrap a gift inside the paper bagel bag.  (giggling.)

So about the gifts, really all that I meant to talk about.  Outside of handmade gifts, I don’t usually talk much about gifts here, but thought I would share this time around.  We don’t have a specific birthday budget.  We rarely if ever buy gifts at other times throughout the year, so birthdays are a big deal.  I’m not saying we spend a fortune, but we take birthdays seriously and put a lot of thought into gifts.  I can talk about the big boys some other time, but they are at a stage where they typically want one big thing, and talk about it all year long in hopes of receiving it on their birthday.  They have reached a point where that one thing is usually expensive, so we plan ahead for the purchase.  The little girls though, they aren’t so specific yet, and don’t have such expensive taste (thank goodness!)  Larkspur likes to make things, and she loves animals, so I focused on that when choosing her gifts.  I did knit her a hat, because she was borrowing mine everyday.  I knit while she was asleep each night, so she had no idea.  That silly girl opened her hat and in her joy started kissing it!  “I didn’t know you were knitting me a hat!”  I didn’t expect her to love it that much, but she does!

Jonny made Larkspur a squirrel feeder and a bluebird house.  He meant to make a bat house as well, but ran out of time.  She loved them.  I also bought her a giant bag of sunflower seeds to feed the birds.  She hugged it in her excitement.  Thinking outside the birthday gift box can be a really good thing.  Evidently birdseed is an awesome gift.  Bird feeders, houses, food, etc. are great gifts for kids who want pets, but whose parents know that pets wouldn’t be a good idea (all of my children want pets on their birthdays.  We have enough pets and there just isn’t room in our house for any caged rodents, sorry.)  You could theme an entire birthday around wild birds.

As far as crafty gifts for my girl always desperate for crafts, I gave Lark:  Her own nice wooden embroidery hoop, and a couple of pre printed pieces of fabric to practice stitching on from Charlotte Lyons.  I love this one, because she can stitch the dolls and then we can cut them out and add backs and stuff them when she is finished.  I also bought a clothespin doll kit and instructions on how to make them.  This is something we will do together.  She was thrilled when she opened that gift!  Finally, she received her own basic potholder loom

because, every kid needs one, right?

Over the past few days, Larkspur has been able to pick up her embroidery hoop, and work on stitching her dolls, without asking for help from me thanks to the needle threader that came in her sewing kit.  She has also been found working on pot holders on her own (which is nice because I needed some new ones!)  She’s been keeping the birds fed, and feeling very grown up and seven all around.