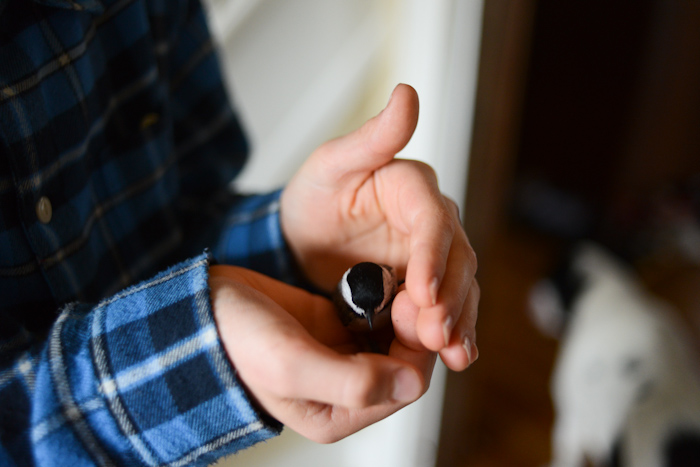 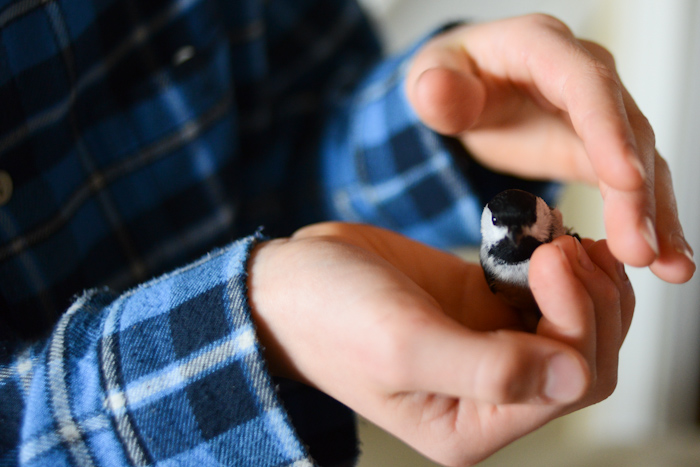 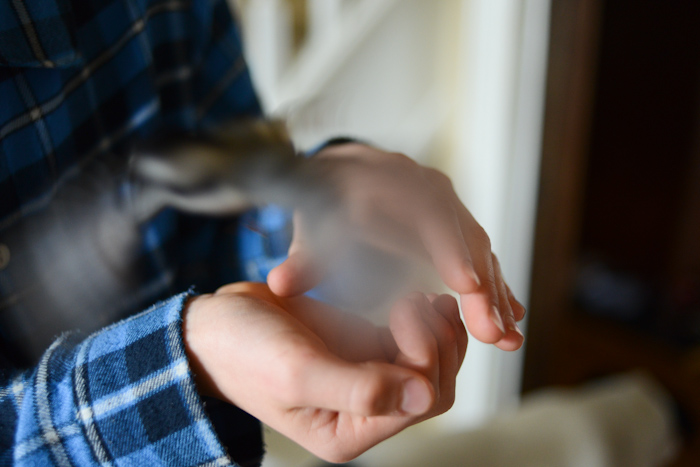 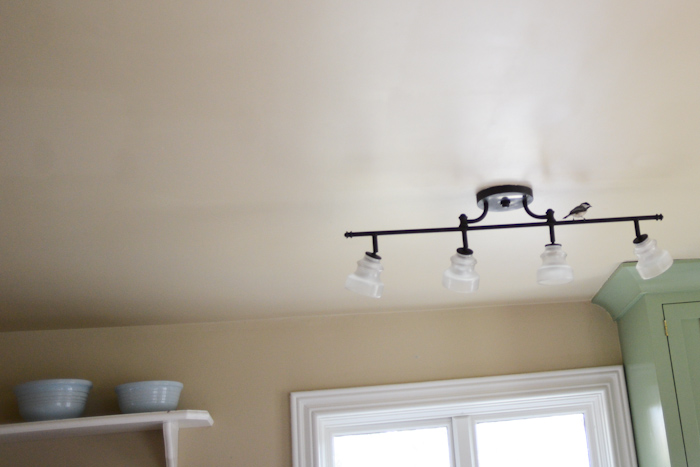 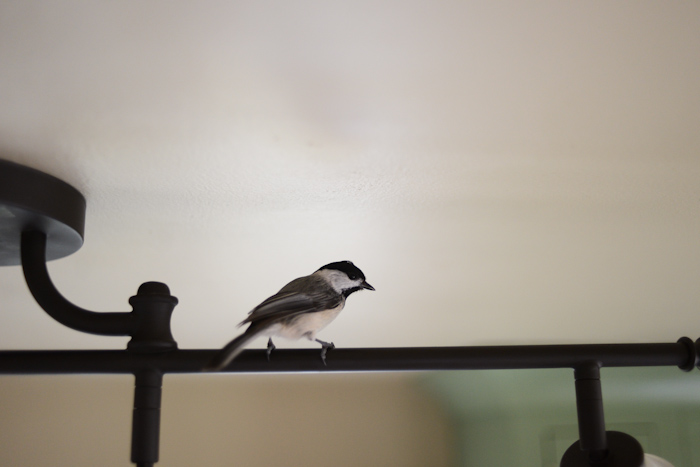 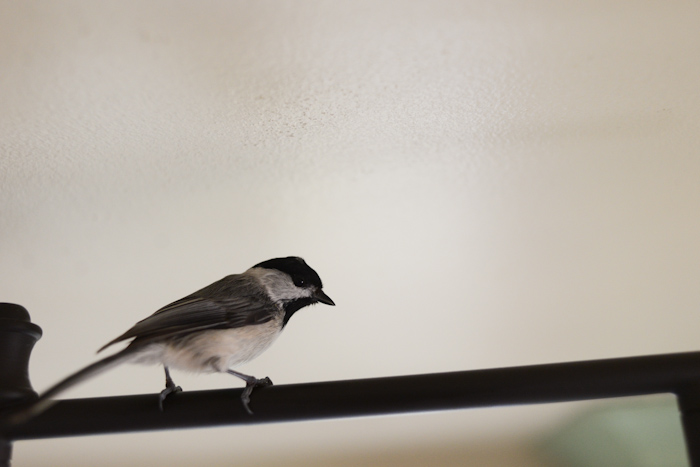 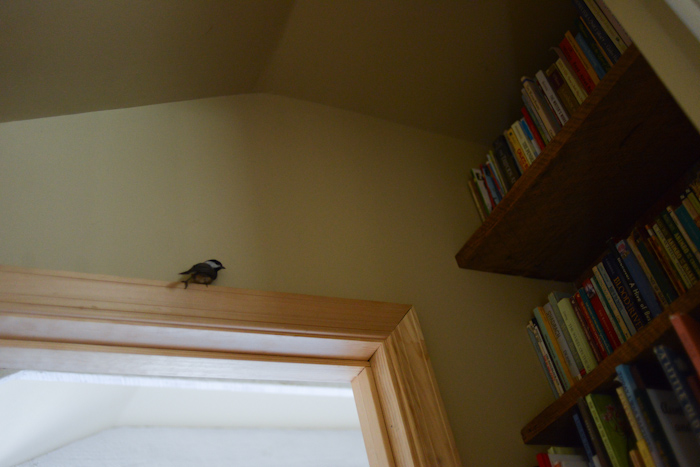 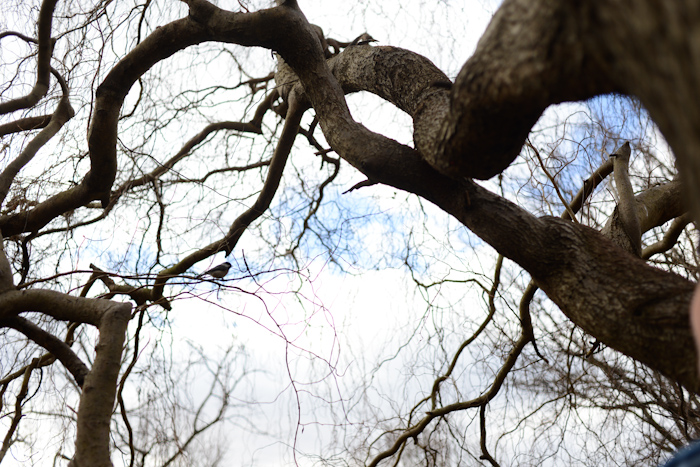 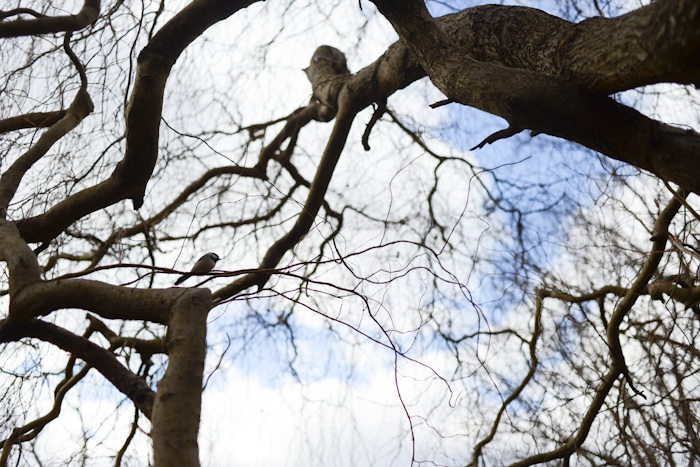 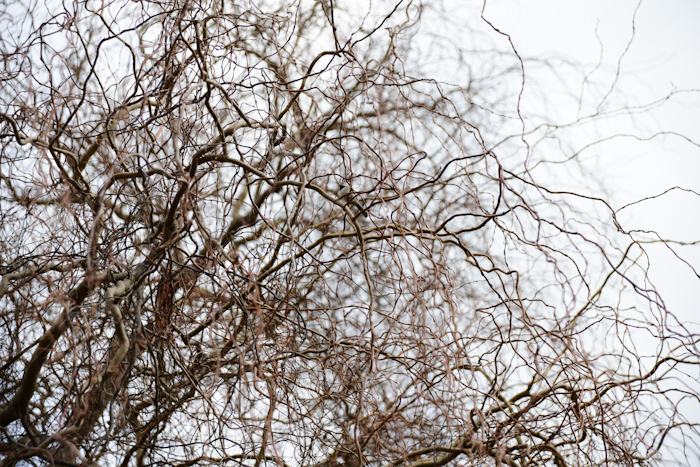 I heard a thump and from the corner of my eye saw the flutter:  a dancing shadow.  My mind didn’t register though, and I carried on with what I was doing in the kitchen.  Beatrix must have seen the flutter too, because she opened the door and stepped outside.  “Beatrix, get back inside!  You’re letting all that cold air in!”  She came back in and shut the door, but then quickly changed her mind.  She slipped back outside, this time closing the door behind her.  I still wasn’t paying close attention.  A minute or so later she attempted to come back inside, something in her hands.  I tuned in just as something flew from her hands into the yard behind her.  “A bird!” Keats yelled and raced outside to scoop up the little chickadee, before Intruder could.  Keats cradled it in his hands as I ran for the camera.  I snapped a couple of pictures and suddenly it flew into the air, landing on a light fixture.  We opened doors and windows, but when the chickadee took flight again it headed upstairs.  The kids followed, crying, “It’s in your room now, Mommy!”  I headed upstairs and found the little brave bird perched above my door.  I gently cupped my hands around it.  Jonny noted the pleased look on my face as I came down the stairs, holding my prize.  We don’t typically interfere with wild animals, save the occasional rescue mission, and I had never held a bird before.  It was so tiny, so light, but it did resist just a bit, a light scratching inside my hands.  I carried it outside to the willow tree and underneath the curling branches, I opened my hands.  The little chickadee flew just a few feet before landing on a branch before me and bursting into song.  Keats and I looked at each other with a smile, then watched as it flew higher into the branches.  It stayed for awhile, getting it’s bearings, before leaving the security of the tree.

Later, Jonny and I asked Beatrix for her side of the story.  She had been so stealthy in her mission and we wanted to know what was going on in her head.  She saw the bird hit the glass and then saw a cat grab the bird.  When she opened the door, the cat dropped the bird.  I must have called Beatrix in at this point, but intent on saving the bird (and doing so without telling any of us what was going on-this was her mission) she went right back out, this time closing the door behind her.  The chickadee was now perched on our wire egg basket.  Beatrix demonstrated to Jonny using her own fingers, how she had uncurled the little bird’s claws from around the wire before picking it up in her hands.  She must have held it there for a second before deciding that she wanted to bring her little friend into the house.  But opening the door required one of her hands, which allowed the bird to escape.  Of course, we knew what happened next.  I don’t want to forget Beatrix’s face as she told her story, lit up by the secrets she proudly shared.  Oh, and the chickadee’s little song as it landed in the willow.  I couldn’t tell if it was scolding, thanking, or just glad.  I’m grateful that against all odds our chickadee survived the glass, the cats, and the children:  a happy ending for all of us.