The only things I bought for Beatrix’s birthday were a photo album and a fancy thrift store dress.  I still worried that she would receive too many presents!  My four other crafting aged children all wanted to make gifts for her.  Of course I had a couple things I wanted to make too, so she really made out well, as they say.  Everyone got started on their gifts weeks in advance, even me!  That didn’t stop me from being up until 3 a.m. the night before her birthday.  But I’ll get back to that.  First the gifts: 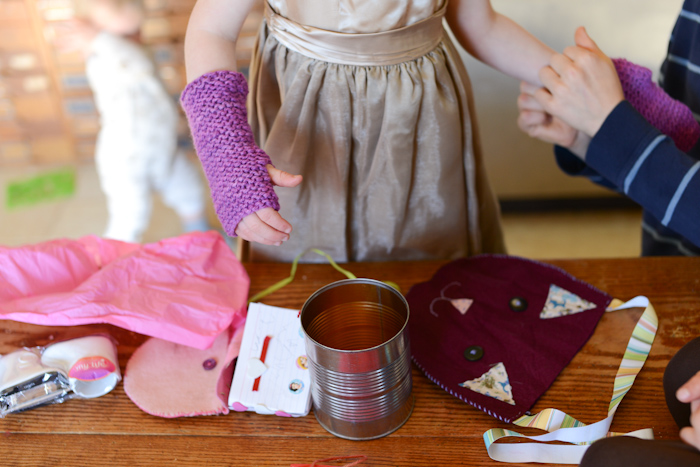 Keats made a kitty cat purse and knit Beatrix a pair of fingerless gloves.  Larkspur gave Beatrix  a hand sewn pink purse, a book (of stickers?) and a pair of store bought ice skates for Bea’s doll.  Larkspur bought the skates with her own money weeks in advance, wrapped them, hid them in a tomato can, and stashed the can in my closet. 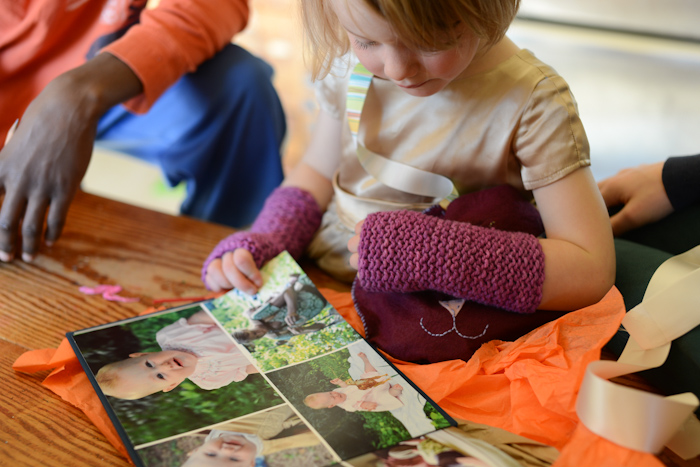 I am the queen of taking too many pictures, and not having a single one of them printed.  So, my ambitious plan was to print a book of photos from Beatrix’s first four years and present it to her on her birthday.  In the end, I decided that a book featuring four years of herself might be too much for both her and for me (to create) and opted for her first year only.  Baby pictures are her favorite anyway.  I used MyPublisher and was pleased with the quality of the book. 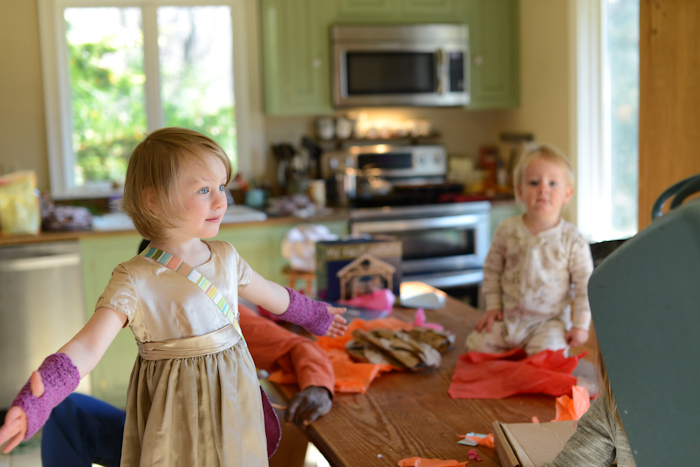 I mentioned to my friend Lori (Bea’s godmother) that I needed a vintage suitcase for Beatrix’s birthday.  She provided a perfect one (thank you!)

Inside, Beatrix found her very own ragdoll.  Larkspur has one, and Beatrix has been hoping for her own.  She can store her doll’s clothes and other little possessions in the suitcase. 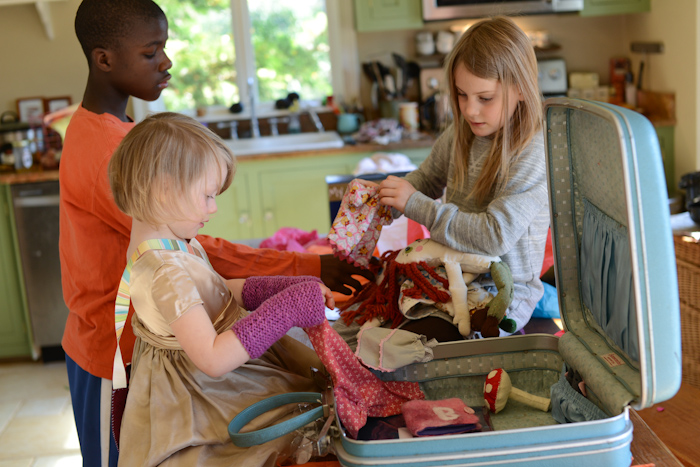 (By the way, wasn’t Beatrix having a great hair day?  I only point this out, because as you know, my girls rarely have nicely styled hair.  I used the curling iron for Beatrix’s big day.) 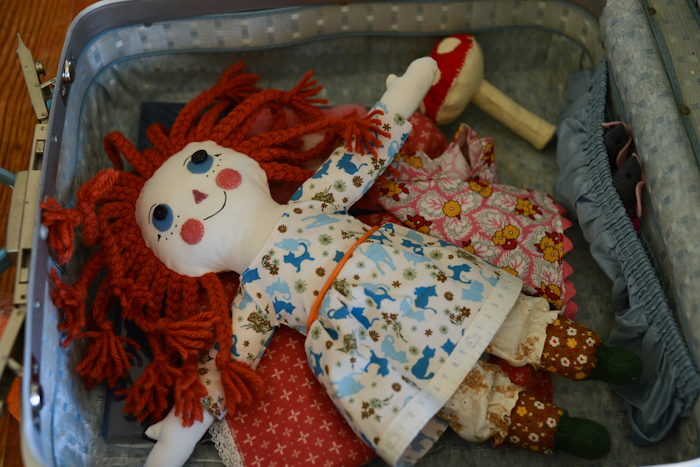 I made the ragdoll using Amy Karol’s pattern.  I spent about a week working on it, a little each night.  Making dolls and doll clothes is a little bit fussy, but the results are worth it!

Look at that toadstool!  And the little mice peeking out behind it! 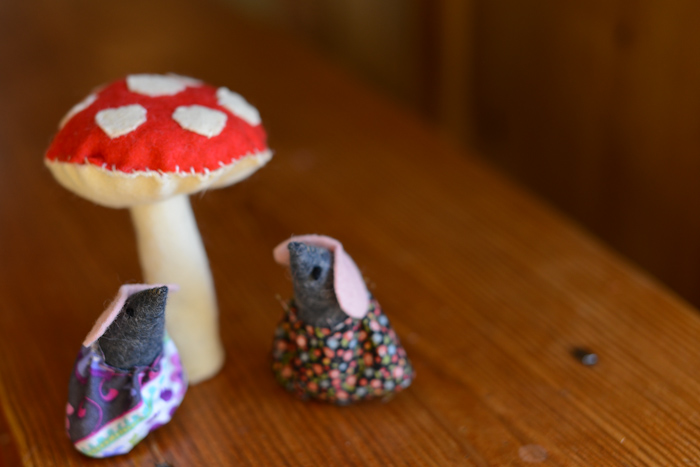 Gabriel sewed these for Beatrix!  So cute! 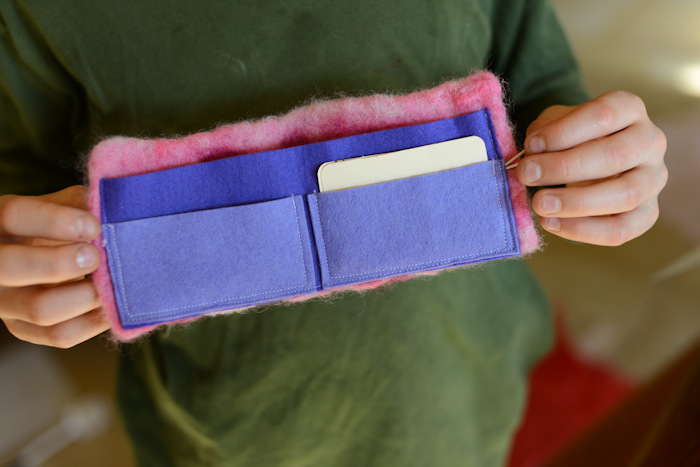 And Seth made her a wallet!  He needle felted the front cover and then machine sewed wool felt inside to make the pouches.  It was his first time to use the sewing machine (he’s never been interested before) and he turned out to be a natural.  Straight lines were no problem for him. 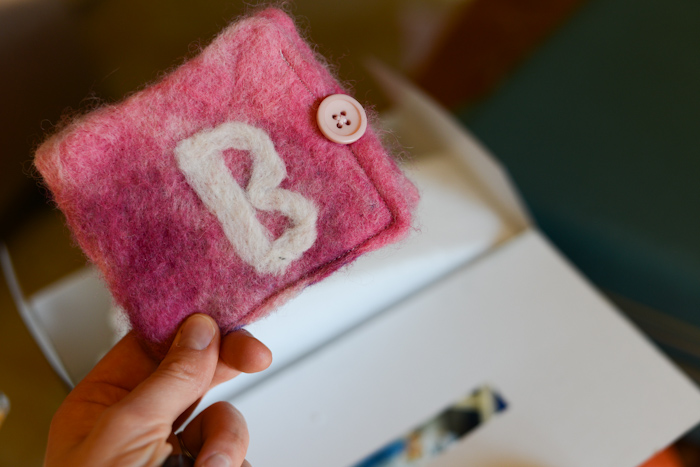 I added the button and a little loop of elastic to hold it closed.  Seth needle felted the B on the front.  I was very proud of Seth’s work.  He clearly did this out of love because he doesn’t typically go in for crafts. 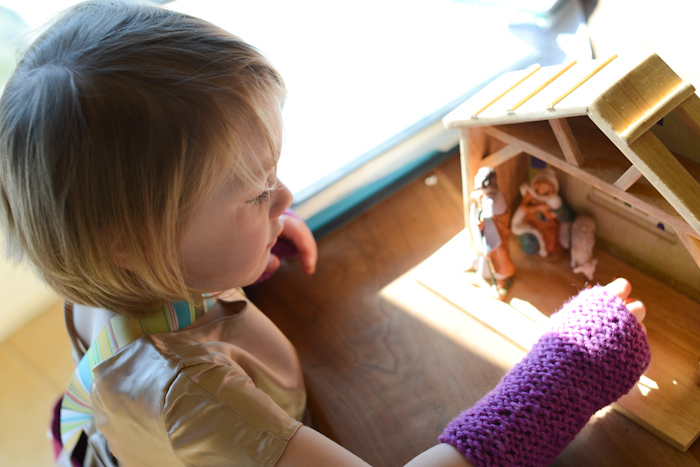 of her very own, also from her godmother who knows her so well!  She absolutely loves it!  She’s in absolute heaven in possession of her very own Baby Jesus. 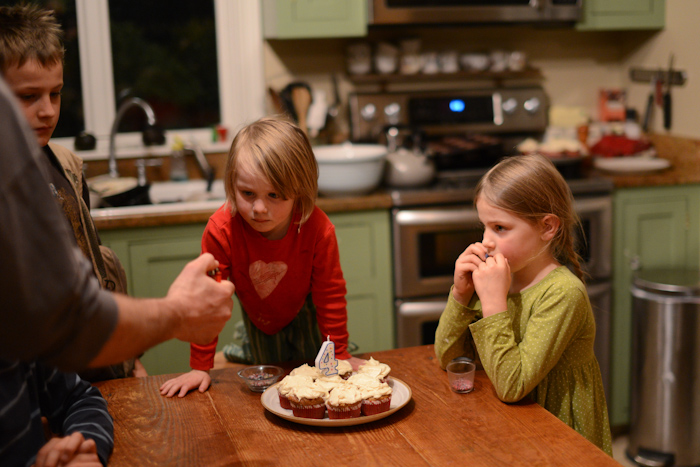 At the end of a very long day we finally got around to the cupcakes. 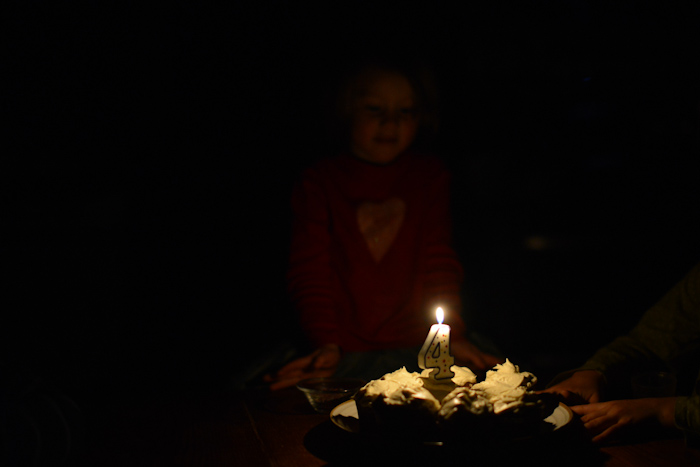 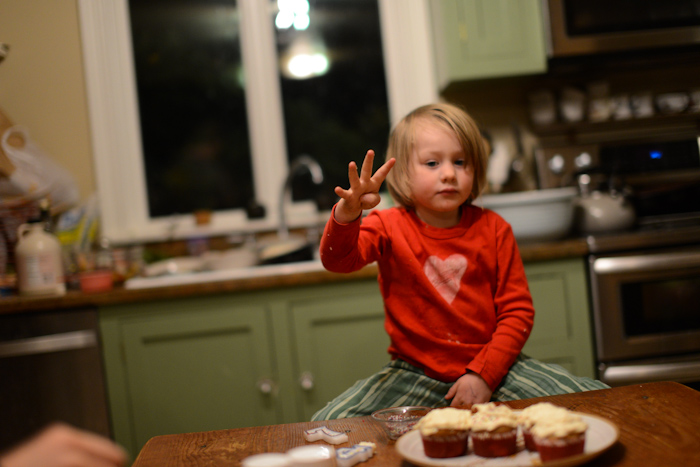 Beatrix barely raised her four fingers when I asked for the traditional (show me how many fingers) birthday photo.  She’d had enough birthday festivities at this point and was ready for bed.  Some kids thrive on excitement and big days, but Beatrix is very drained by them.  Just the excitement of opening gifts and making a trip to the bookstore to spend her birthday money from grandparents was enough to completely wipe her out.

I was wiped out as well, having stayed up until the wee hours of the morning the night before finishing her birthday dress (Jonny faithfully by my side, even ripping out stitches for me.)  I’ll share photos of the dress (that was quickly upstaged by the thrift store shimmery one) tomorrow!

Oh, and Keats’ kitty cat purse pattern along with Gabe’s toadstool and mice pattern came from Sewing for Children

, my absolute favorite book of sewing projects for kids.  My kids always choose projects from this book over any others.

(And now I can confess that I am relieved to take a break from creating on a deadline.  For the most part, I don’t make handmade Christmas gifts (recent rule.)  The next birthday at our house is mine, and I have no intention of staying up late making myself something the night before!)