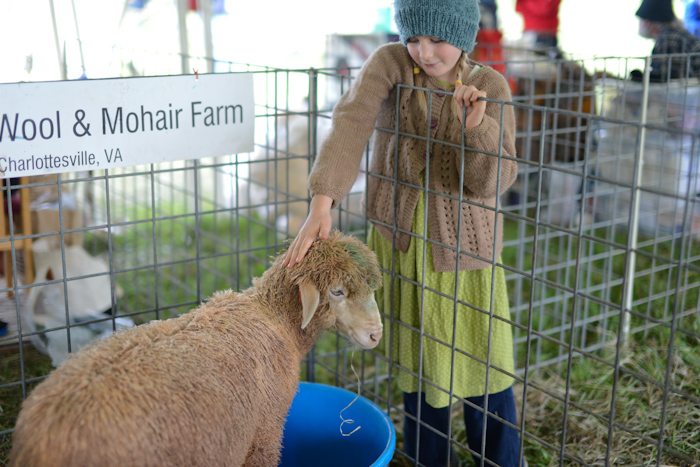 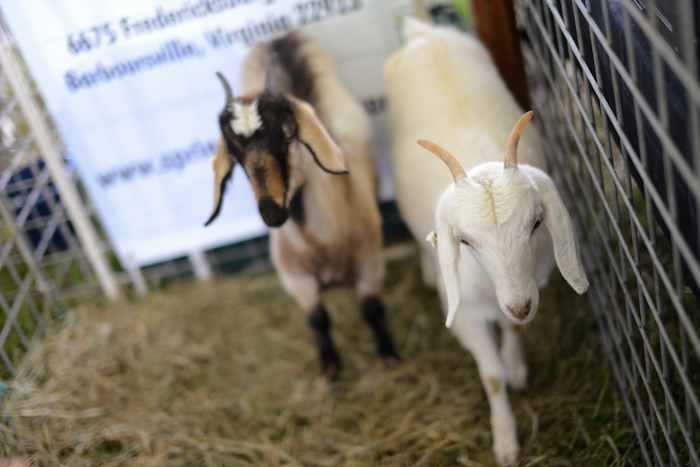 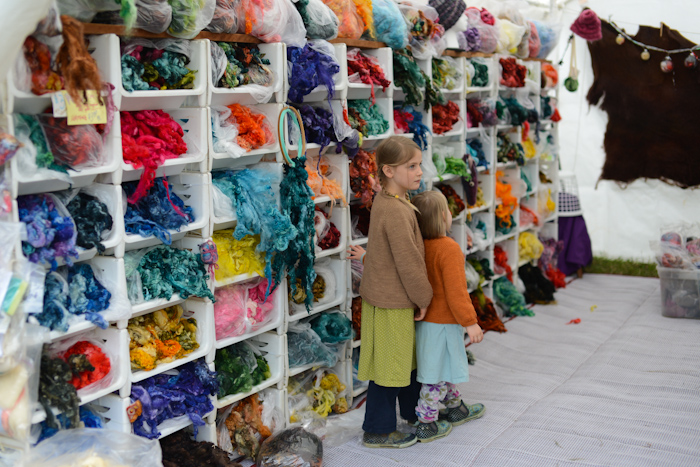 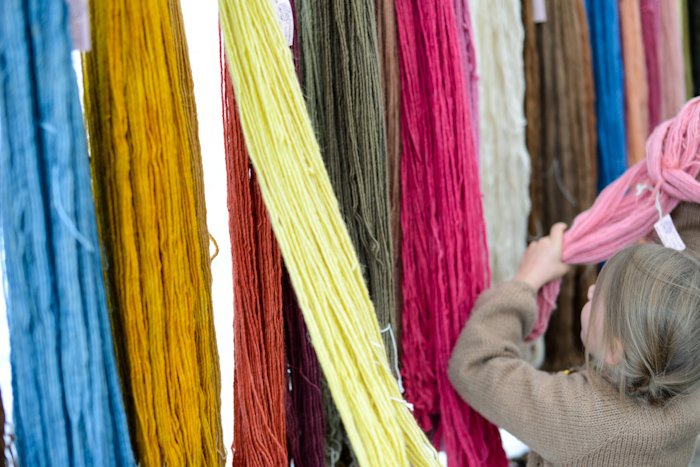 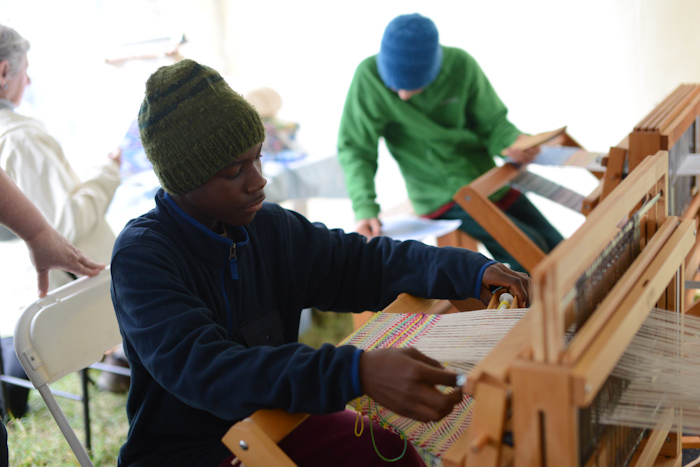 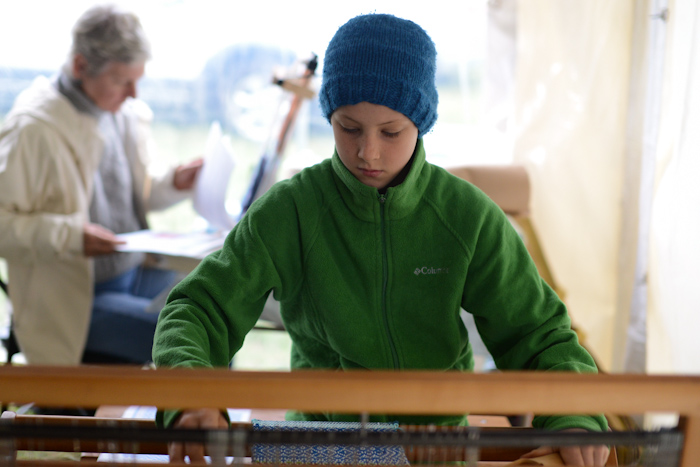 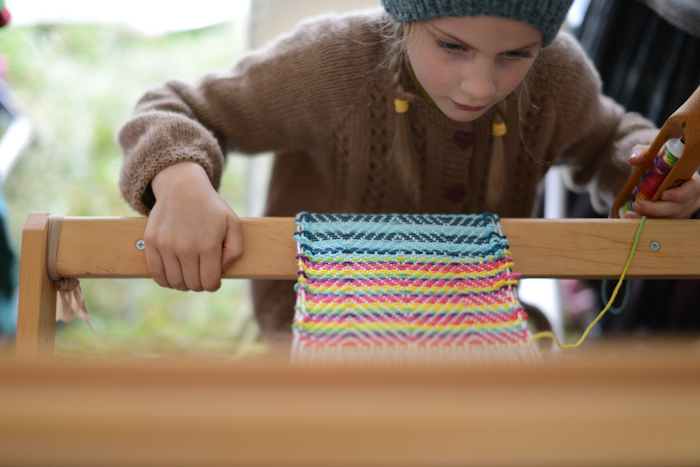 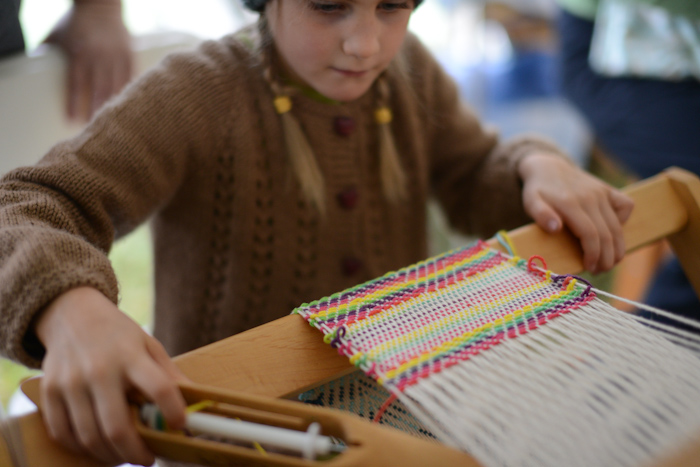 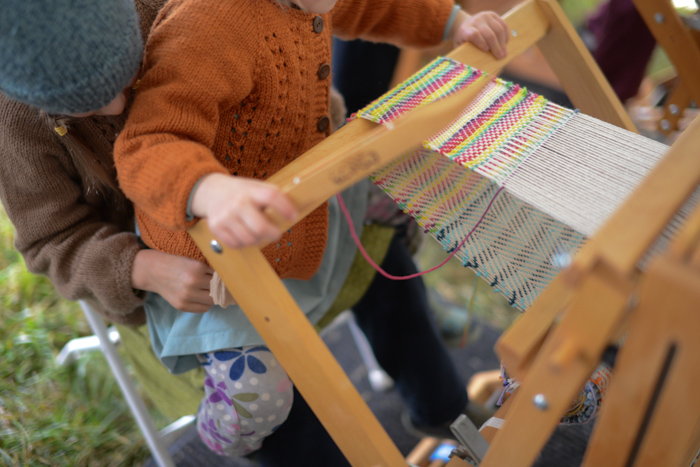 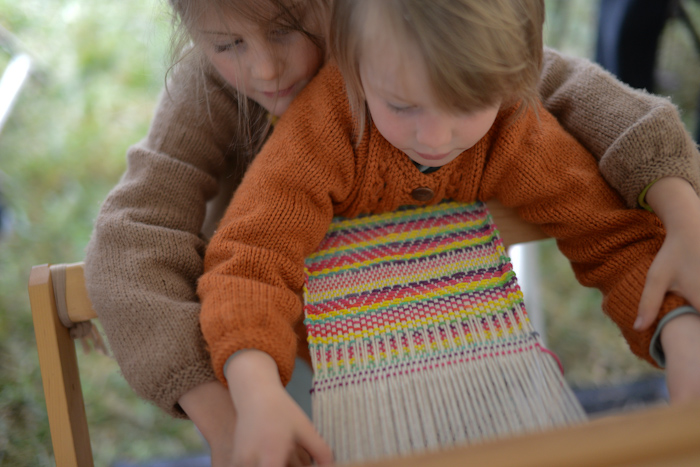 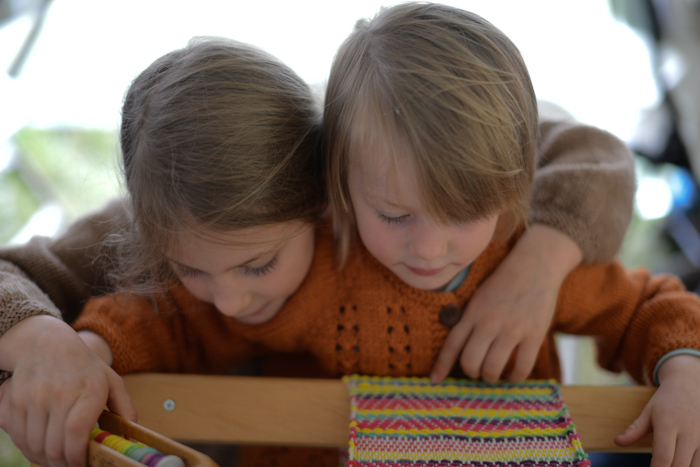 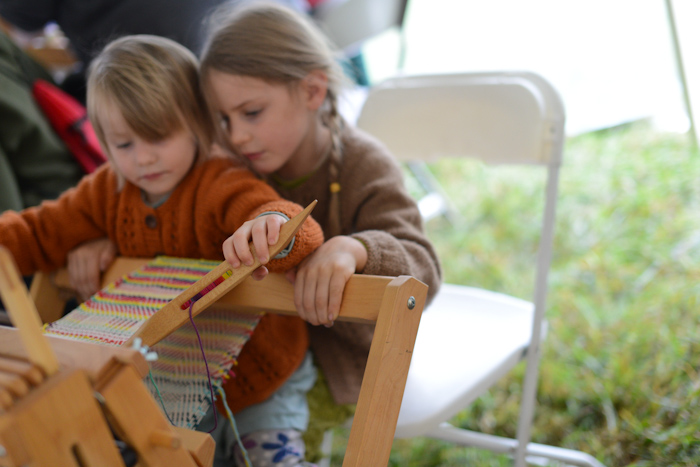 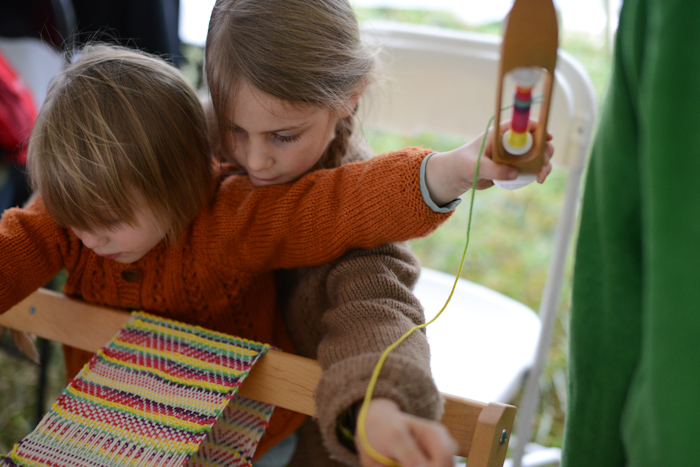 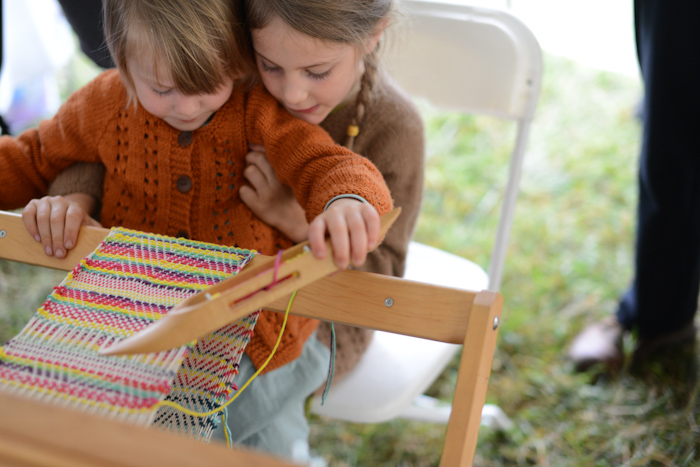 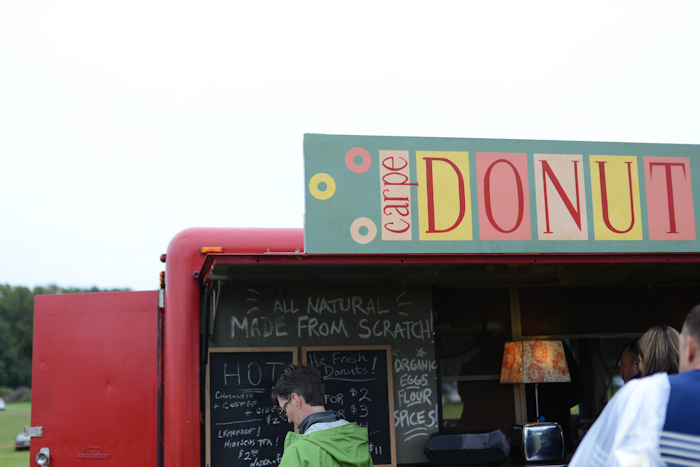 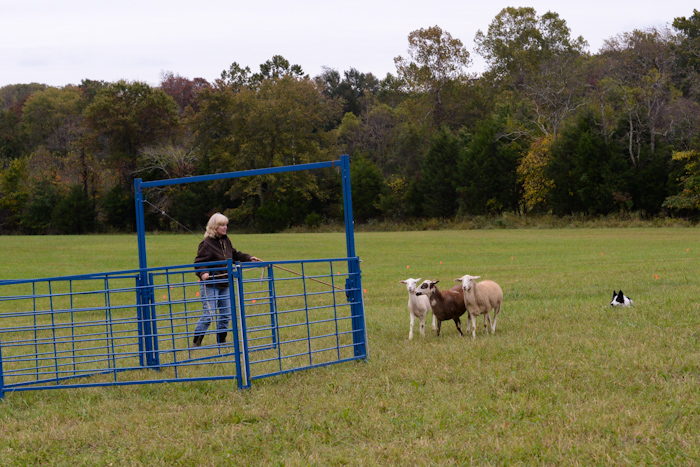 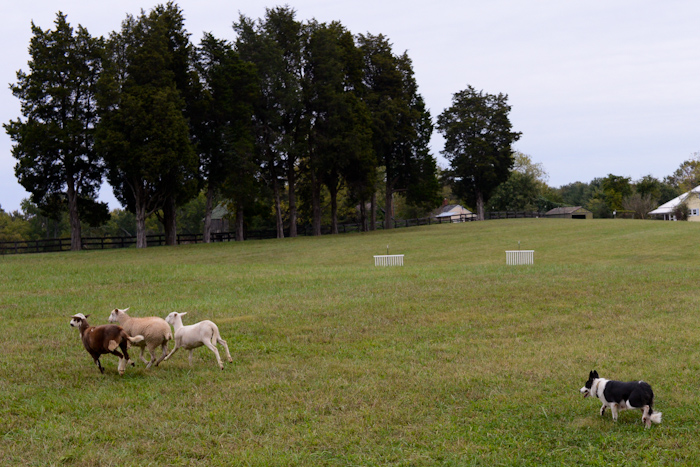 I didn’t think we would make it the fiber festival this year.  Saturday there was baseball, and Sunday it was supposed to be cold and rainy.  I also wasn’t thrilled at the prospect of taking all the kids without Jonny like we did last year, and he needed to work on the bathroom.  In the end, I realized that being stuck inside on a cruddy day with the house a wreck was far worse than a little adventure with my kids.  Most of my kids were begging and pleading to go, claiming they didn’t care if it was cold and raining.  Seth hates the fiber festival, so he stayed home with Jonny, while I took everyone else.

Once we arrived, it became clear that shopping for yarn wasn’t what any of them had in mind.  There was some debate over whether we should get donuts first or go to the hands on tent.  After petting a few sheep and goats, they decided to go straight to the teaching tent to do some weaving.  Gabe, Keats, and Larkspur all took turns weaving while Silas, riding on my back, pulled my hair and Beatrix watched, wishing for her own turn. Larkspur told Beatrix that she could have a turn, but that since she couldn’t reach the pedals, she would have to sit in her lap and they would “do teamwork.”  That was my favorite part of the day, watching them work together.  I was reminded once again how much I wish I had space to set up the table top loom I was given a few years ago.  Someday, I hope I will.  I can imagine telling the girls to do some weaving together at times when they are fighting, because yes, they fight.  I’ve noticed that their fights are different than those between the boys.  They always arise when one of the girls is feeling unloved by the other.  There is this perception of “un-love” that results in hurt feelings and lashing out.  I wonder how true this remains for grown women?  When I think of the times I have been upset with a friend, often it is because she has hurt my feelings somehow, not even meaning to.  My work with my little girls then, is always to remind the girls of how much they love each other.  I would love to be able to sit them down at the loom at times like this, and say,”How about some teamwork, girls?”  They would scowl at first, but eventually they would start giggling, hug each other and get to work. 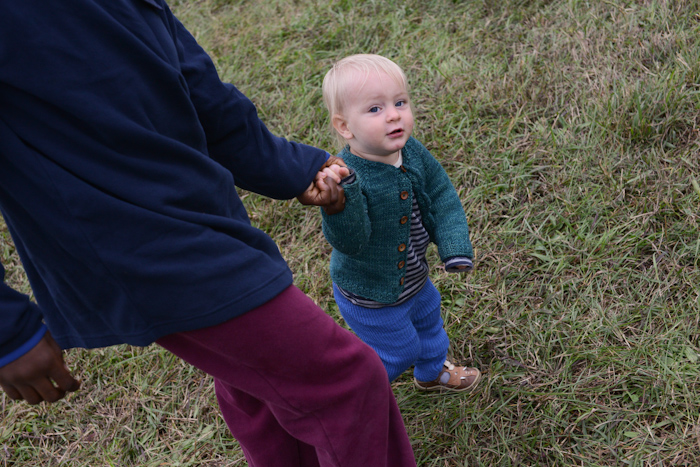 After weaving, we bought donuts, the other real reason my kids wanted to visit the festival.  We ate them while watching a bit of the sheep dog trials before heading back to the van.  As we walked away, I reached into my back pocket to grab my lens cap and dislocated (?) my shoulder.  This is something that has been happening to me on and off for about two and a half years.  I called all my children around for help.  Gabe took Silas off my back and everyone took something to carry.  I managed to get a photo of Gabe and Silas while telling Gabe through my grimace, “Don’t let Silas ruin his new pants.”  (These are some of my favorite wool pants for toddlers.   I usually reserve them for pajama pants, or wearing around the house.)  I made it back to the van and burst into tears.  There’s no telling what my poor kids thought.  I couldn’t get my shoulder back into place and it hurt terribly.  I stood there with my face in the seat of the van crying while the girls prayed for it to go back in place.  After about five minutes it did, and I nearly threw up because it was really that bad.  I am hoping that it’s not really a dislocation, but something else(?) popping out of place that’s not a big deal outside of the horrible pain.  (updated to add:  based on some very serious youtube research, I really don’t think it’s a completely dislocated shoulder I’m dealing with–otherwise I’d be in far worse shape!) I’ll see a doctor about this next week, but I wondered if this has happened to any of you?  It began when Beatrix was about 18 months old and has gotten worse in the past six months or so, maybe due to lifting gigantic Silas.  I haven’t wanted to talk about it, because really I want to ignore it.  But, I can no longer hoe my garden, pitch mulch, or do anything that requires using my right arm behind my body, so to the doctor I go.   Last night there was still a burning pain in my shoulder and I didn’t. even. want. to. knit.  (thank goodness for my Winterwoods sampler.)

It’s cold here this morning.  I kind of love it.

p.s.  The girls are wearing their Sunday Sweaters.