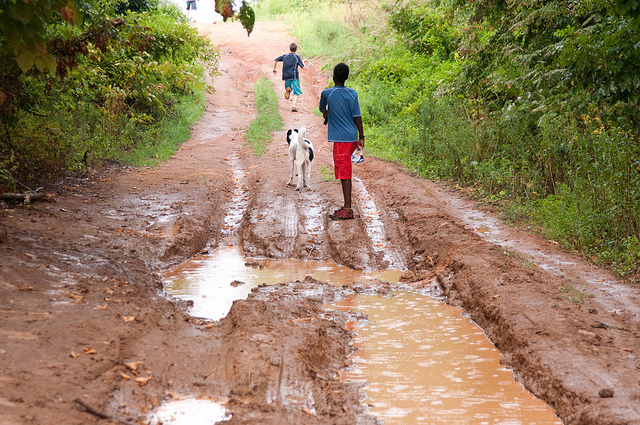 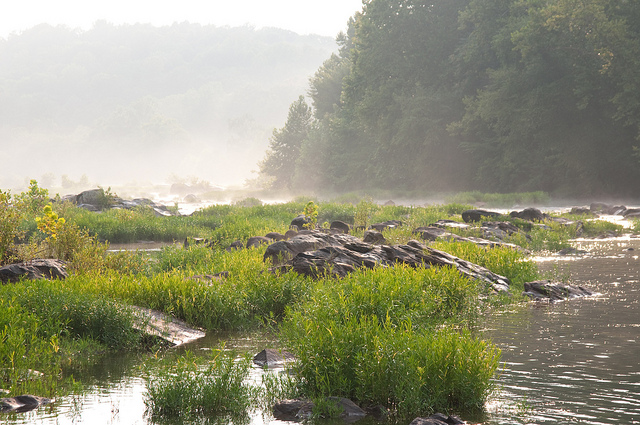 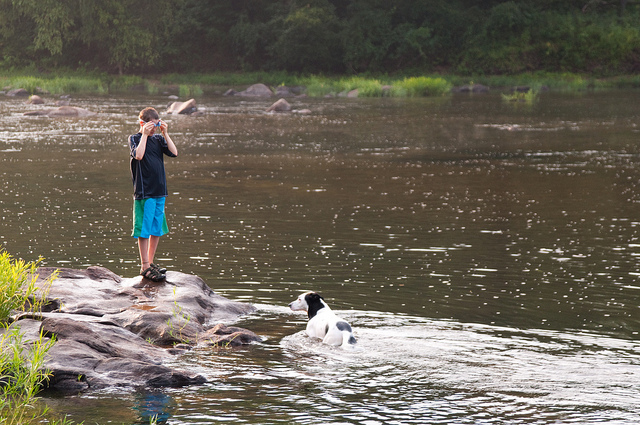 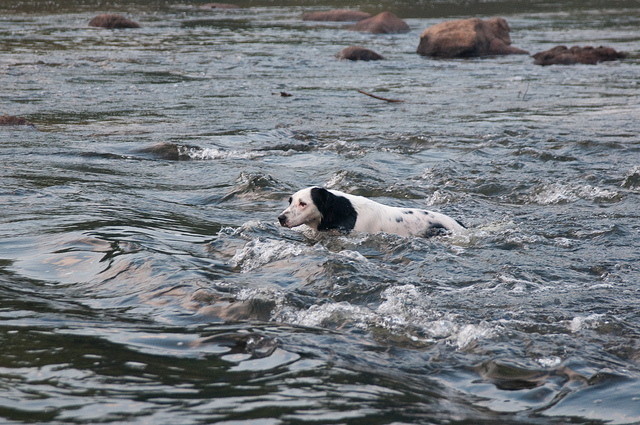 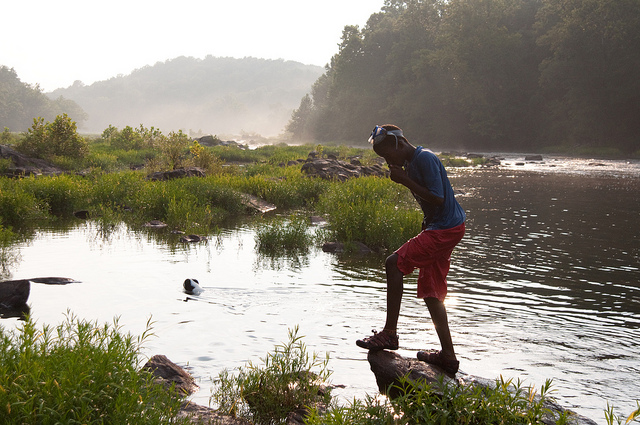 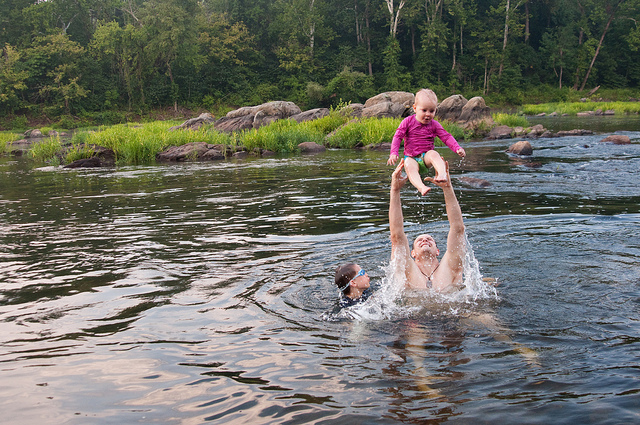 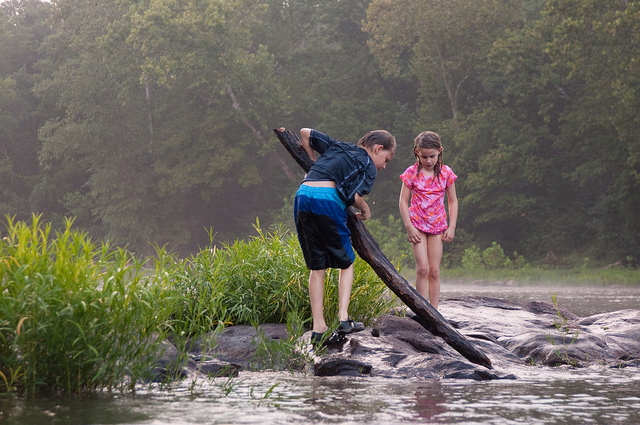 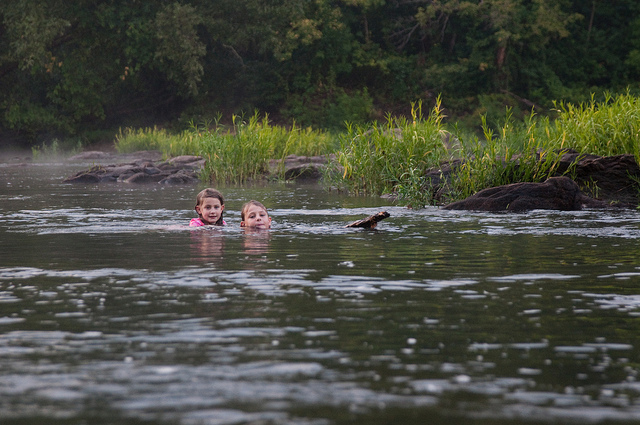 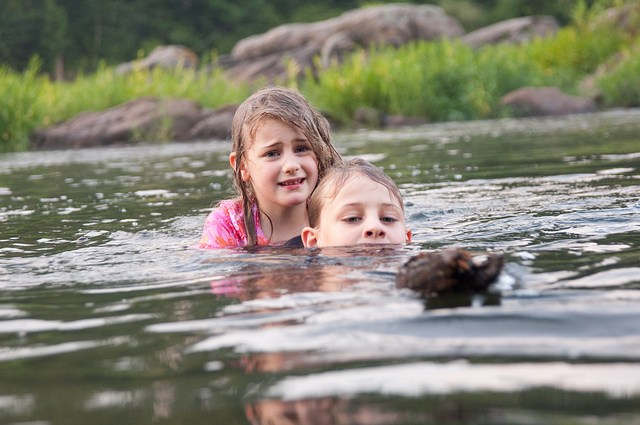 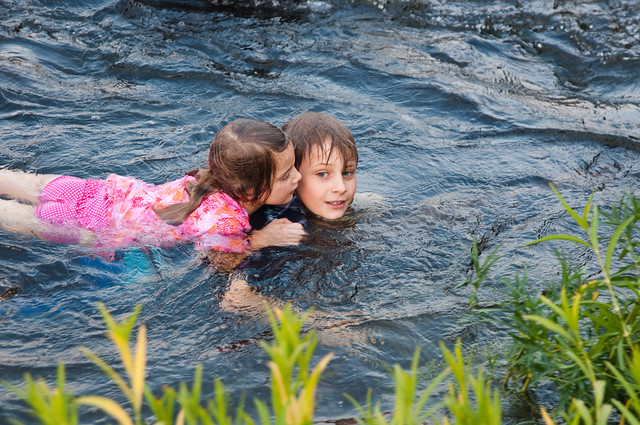 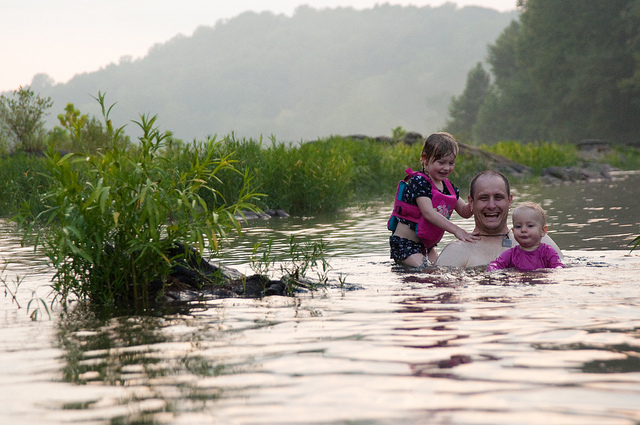 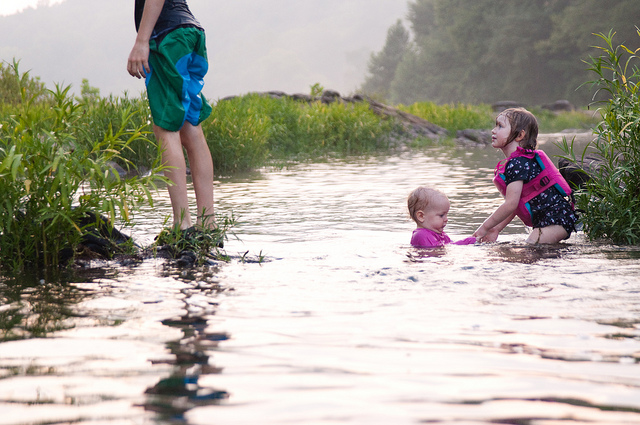 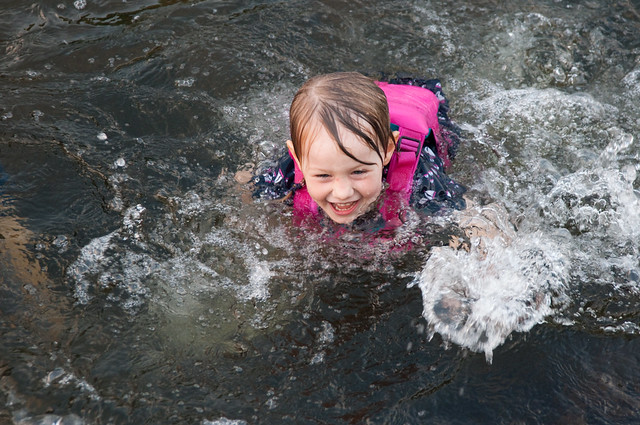 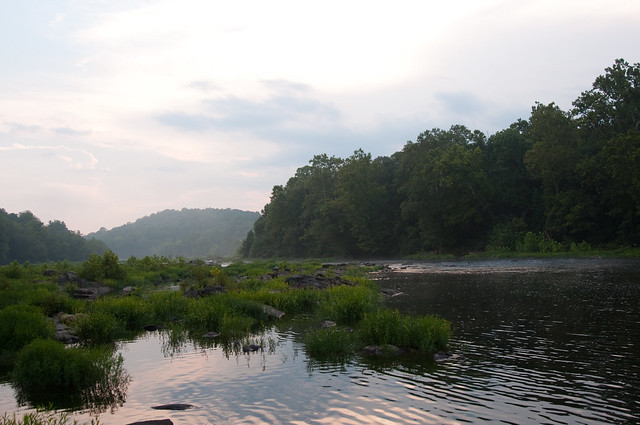 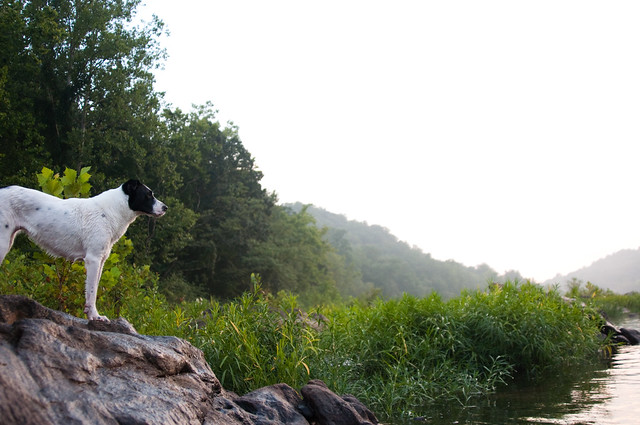 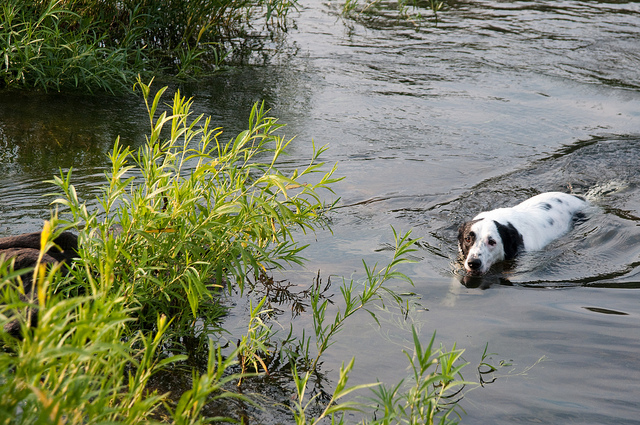 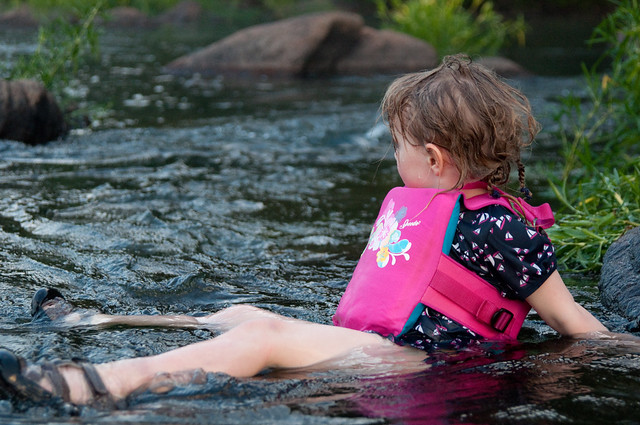 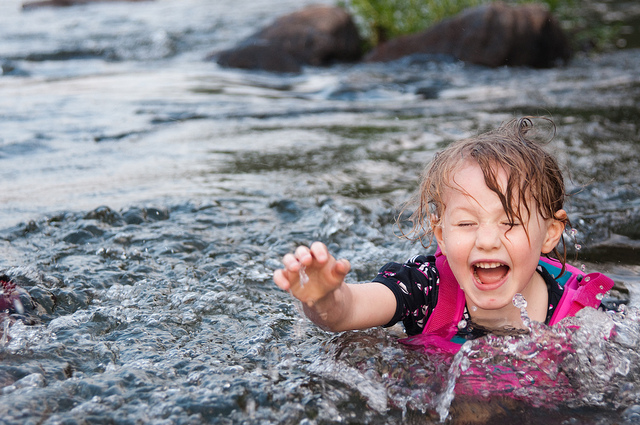 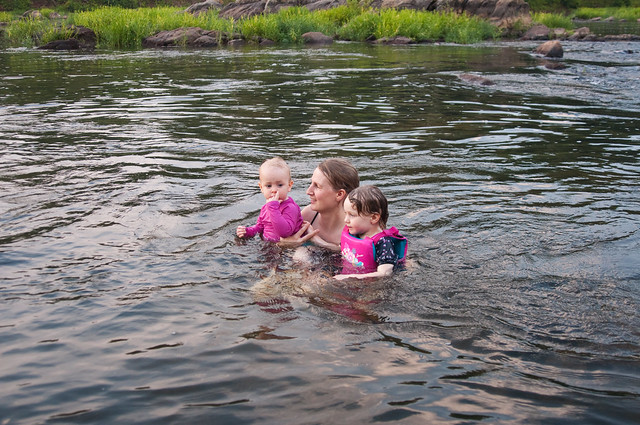 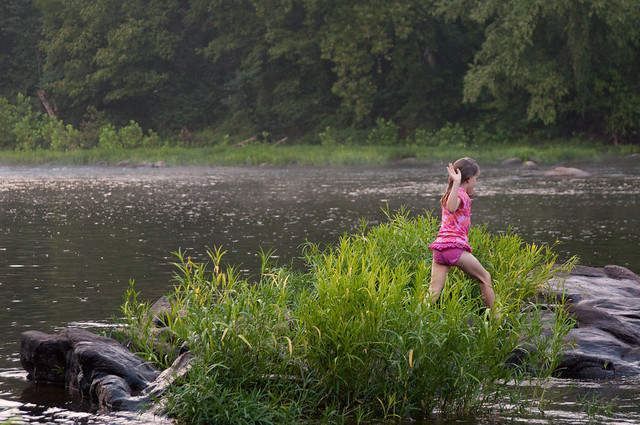 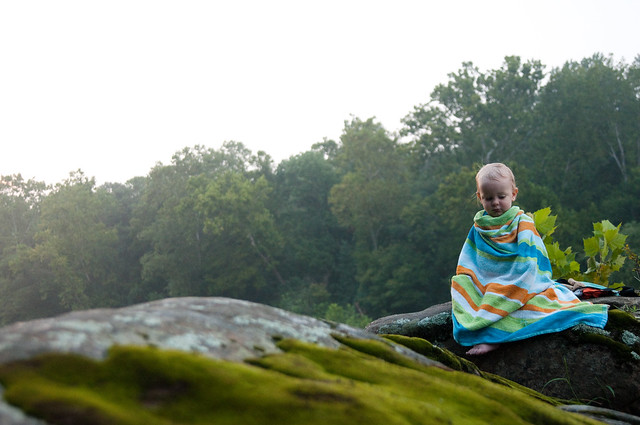 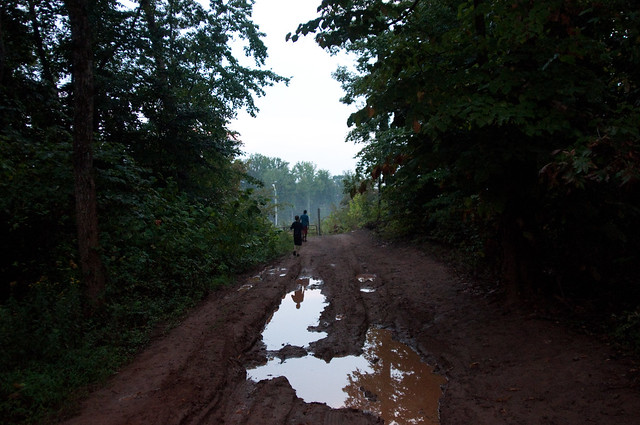 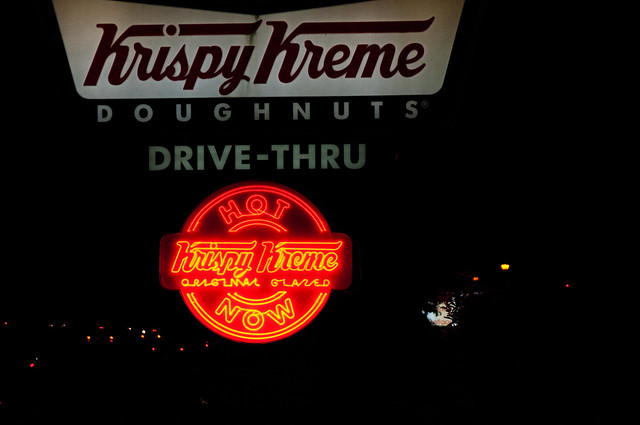 On Friday evening, we made a last minute decision to go swimming at what we call our “swimming hole.”  It’s possible that we were influenced by the fact that Keats had asked if we could go to the swimming hole with nearly every breath that day.   Driving to the dead end where we park to hike down to the river, we came across what was obviously a very big event.  We had to take a small detour for what we discovered was a big outdoor concert.  We eventually got parked and headed down to the river.  We all had a great time swimming, especially Trudy (and yes, Silas wears a hot pink swim shirt handed down from Beatrix.  Pink was actually considered a boy color until the 1920s (read that in this vintage baby knitting pattern book

) and we are bringing that back in an effort to save money.)

After spending a couple of hours at the river, we hiked back out.  Just as we arrived at our van we heard a voice over the loudspeaker welcome a band to the stage.  We couldn’t make out the name, but the crowd that must have grown while we were swimming let out an excited roar.  Jonny recognized the first song that they played, but couldn’t remember who sang it.  Next up, they played another song that Jonny knew from childhood.  We thought it might be possible that the band playing was actually a popular well known band, but both sort of assumed that it was just a really good cover band.  As we made our way back out to the main road we remarked that all of our town must be at this concert.  Women were walking around dressed like they had put a whole lot of time into their outfits and appearance.  We got a peak at the band onstage as we drove by.  We wondered if we should pull over and get out to watch.  But with bedtime looming near, and six children in the car, we decided against it.

Driving down the road, we passed Krispy Kreme and of course the hot light was on.  One of our kids, can’t remember who shouted out “The hot light’s on!  Can we go?!!”  “Seth replied, “Don’t even ask.  You know mommy isn’t going to take us there.”  Considering that my kids haven’t had donuts in about a year and a half (March 2011 to be exact-at the Maple Syrup Festival) and wanting to be “fun, unpredictable mom” I pulled in.  Our kids didn’t even register what was actually happening until I spoke the words, “I’d like one dozen glazed, please.”  They were ECSTATIC.  I should add that Beatrix who is only 3 1/2 remembers the donuts at the Maple Syrup Festival so well, that she regularly says that she wants to move to Highland County (VA), just for the donuts.  So you can imagine what happened when I pulled up to the window and realized with HORROR that we were completely devoid of all forms of payment.  Worried about someone stealing my wallet from the van, I had only carried my driver’s license, and Jonny had left his wallet at home as well.  I explained to the fellow at the window that actually I didn’t have any money and I will openly admit I hoped he would hear the crying from the backseat and give them to us for free.  But, he didn’t.  And there were tears, major tears from Beatrix.  My poor kids are totally deprived when it comes to melt in your mouth so bad for you donuts.  This was a tremendous blow for them.  They wanted to go home get the money and come back, but we were too far from home to do that, and besides the hot light wouldn’t have been on any more.  If I am going to eat those donuts, it needs to be worth it.  As we drove, Jonny and I thought about the fact that my friend Lori lives pretty close to Krispy Kreme.  Could we possibly drive to her family’s house, knock on the door at almost 9 p.m. and ask for donut money?  Of course we didn’t even have a cell phone with us, so I couldn’t call and give warning.  No, instead I knocked on their door and when Lori and her husband answered I started explaining…”I left my wallet at home.”  “Did you get pulled over?” (swallowing pride)  “No, but the hot light was on at Krispy Kreme and I tried to buy my kids donuts.  I wondered if you guys might have some cash I could borrow?”

They totally came through.  And now I owe them twenty bucks.  What awesome friends.

Oh–the band!!  An internet search when we got home confirmed that it was Foreigner!  Their song “I Want to Know What Love Is” was my hands down favorite in the fourth grade.  I still don’t think it would have been worth it to drag all of our kids into that crowd to watch them (Jonny disagrees.)  And of course the hot light would definitely not have been on when we passed Krispy Kreme if we had stayed.  And those donuts were so worth the whatever all that bad stuff in them is. 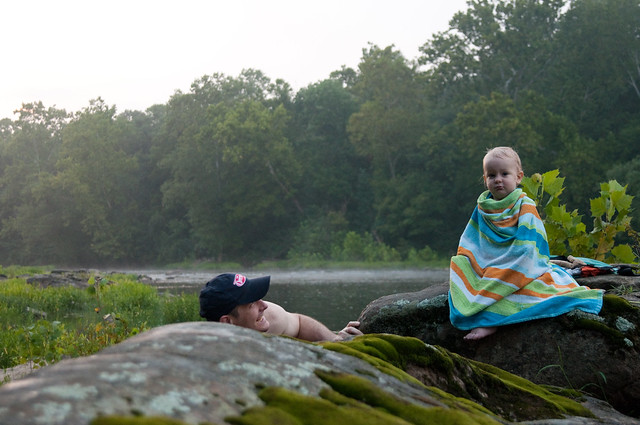 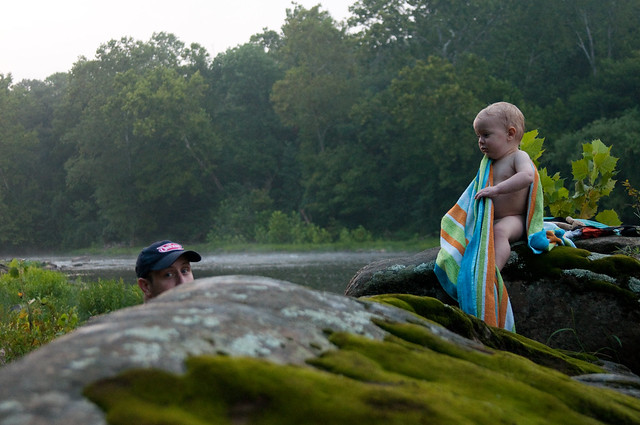 Leave a Reply to Andee- Match the Pictures Cancel reply