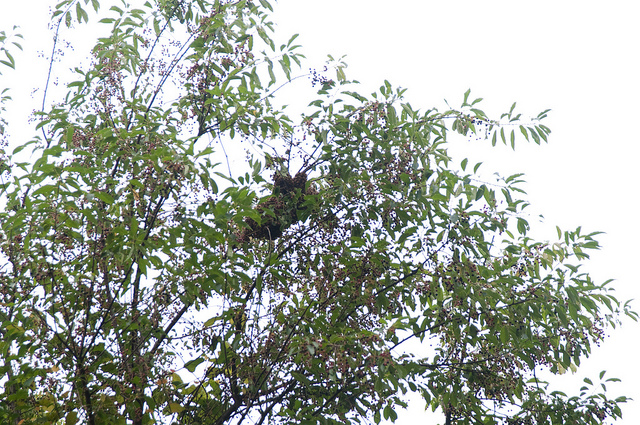 Friday afternoon we were wandering around our backyard with some friends when I noticed what looked like a swarm of bees high in a black cherry tree.  I instantly dismissed it and didn’t even say anything because I figured it too late in the season for a wild swarm.  A few minutes later though, one of the boys noticed it too and said so.  Upon closer inspection we realized that it was indeed a swarm of honeybees. 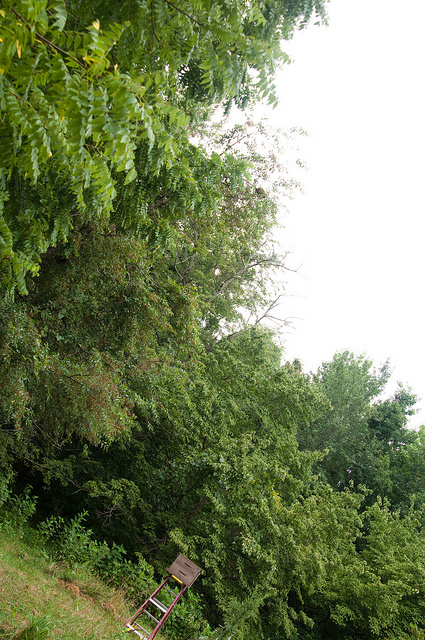 Jonny and his friend grabbed a ladder and a nuc box that we  bought earlier this year (in hopes of catching a wild swarm) and set up what we hoped would be a trap for the bees because they were way too high in the tree for us to go after them. 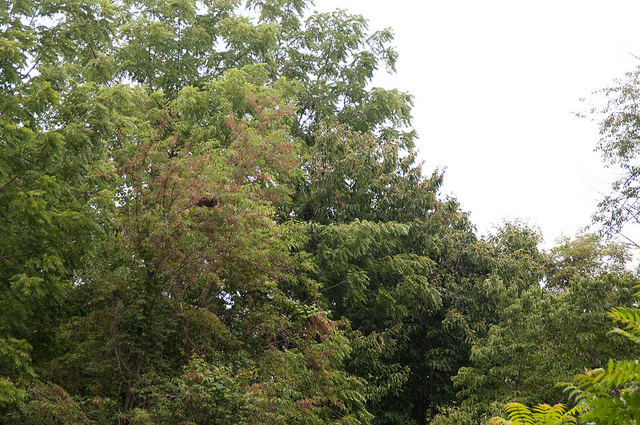 Can you see the swarm? 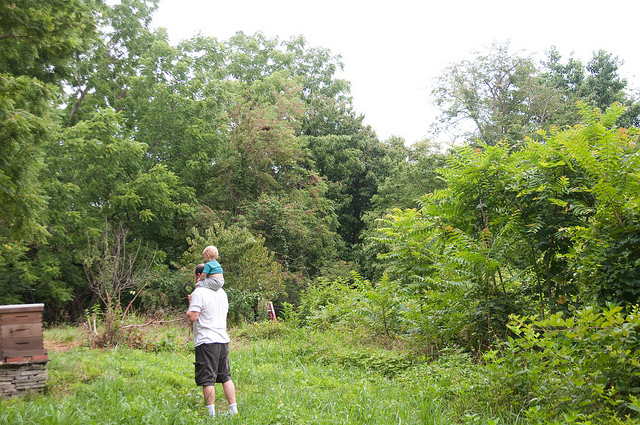 We remarked on the fact that the swarm was relatively close to our hives.  Jonny and I exchanged a glance but quickly concluded that that swarm couldn’t be from one of our hives because we just installed our packages this spring and our bees had plenty of room…. 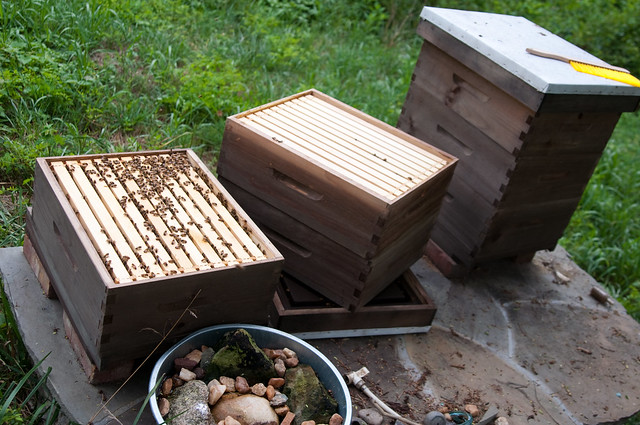 Just to be sure, Jonny made a quick peek inside both hives.  There were still lots of bees in both so we assumed that it wasn’t one of our hives that swarmed.  We speculated that maybe a recent storm had upset a wild colony and now they were looking for a new home.

Meanwhile, the trap (scented with lemongrass oil as a lure) seemed to be working. 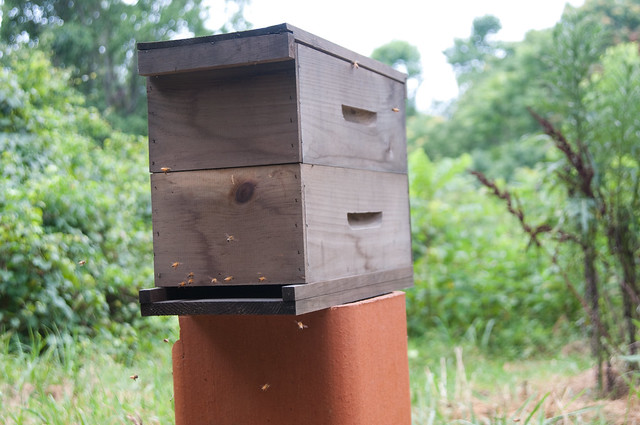 We decided that the ladder wasn’t sturdy enough and moved the hive onto something else.  There were so many  scouts checking out the hive that we thought this was going to be easy.  Surely at any moment they would call the rest of the crew to move into this great new hive. 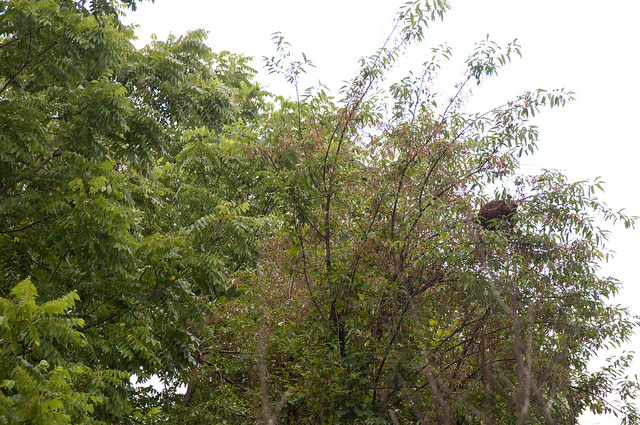 Despite all the interest, the swarm stayed put. 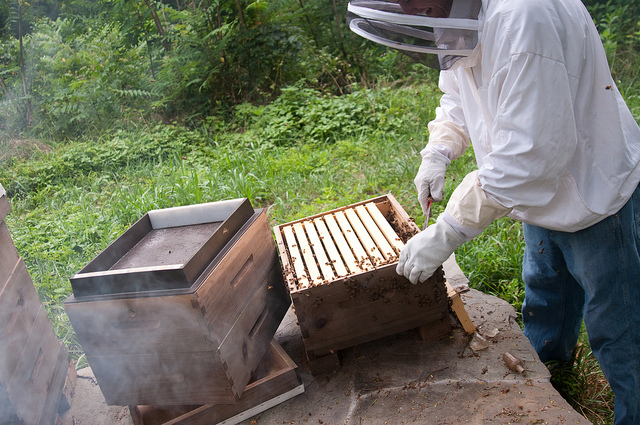 Meahwhile, Jonny and I opened up our Lark Rise hive again for another look.  The bottom super did seem a bit emptier than it should, but we didn’t spend much time looking around because those bees were not happy at all.  They were mad.  We began to realize that the swarm may have originated from Lark Rise. 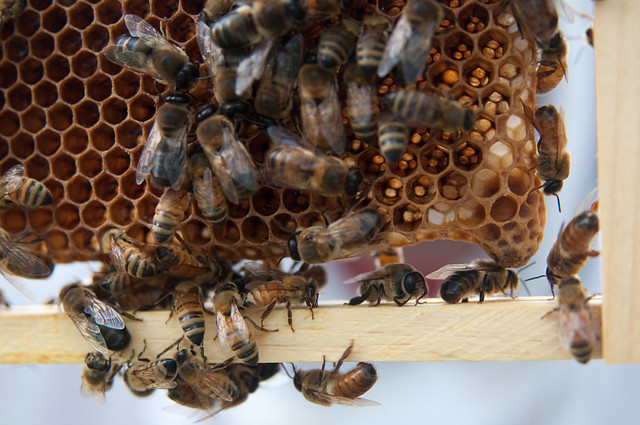 On Saturday, Jonny and I opened up our Lark Rise hive again, hoping to get a closer look. 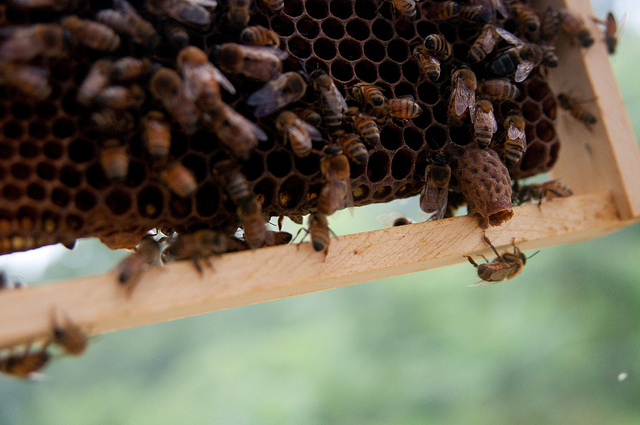 What we discovered confirmed our growing suspicions.  These bees planned and prepared to swarm.  We found at least five open queen cells.  We also found eggs, so we hope that a new queen has already started laying. 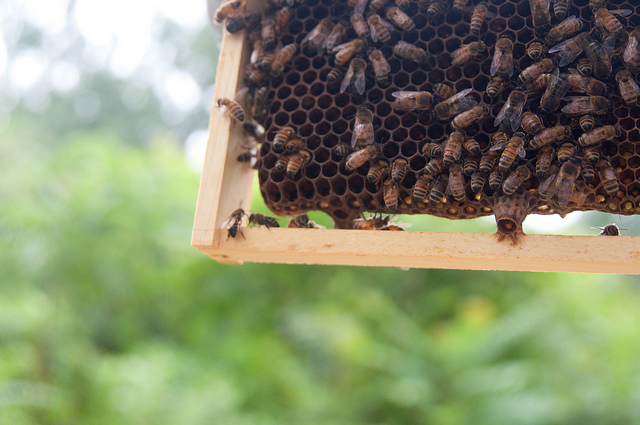 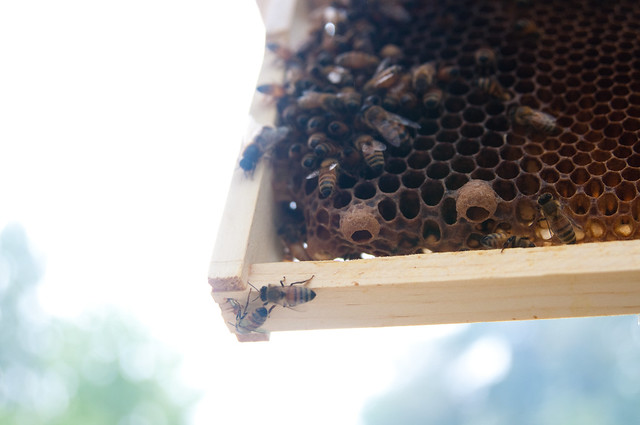 We opened up Candleford and took a really good look around there too.  We noticed a couple of funny cells (don’t know what they are) but nothing to indicate that they had raised a new queen.  So, Lark Rise it was.

Saturday was overcast and rainy.  Not good weather for bees to fly about.  Our swarm stayed put. 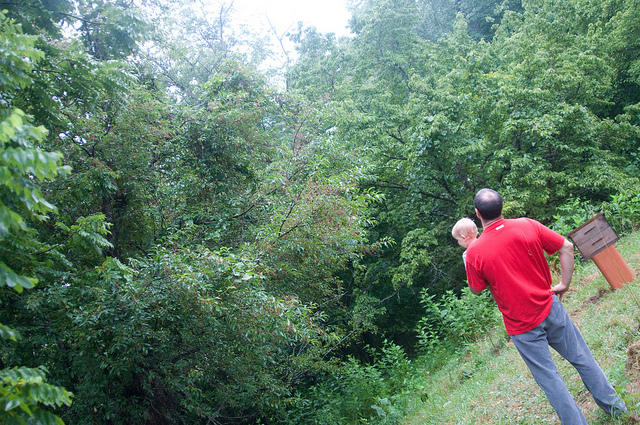 We spent most of the day watching the swarm doing nothing.  This situation is terribly preoccupying. 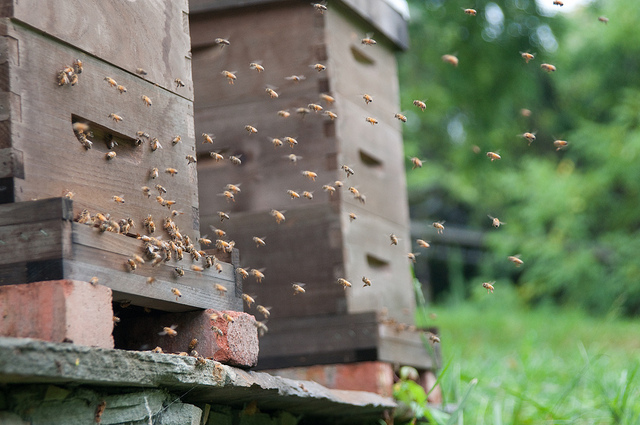 The sun finally decided to shine on Sunday afternoon.  The bees who remained at Lark Rise were very busy. 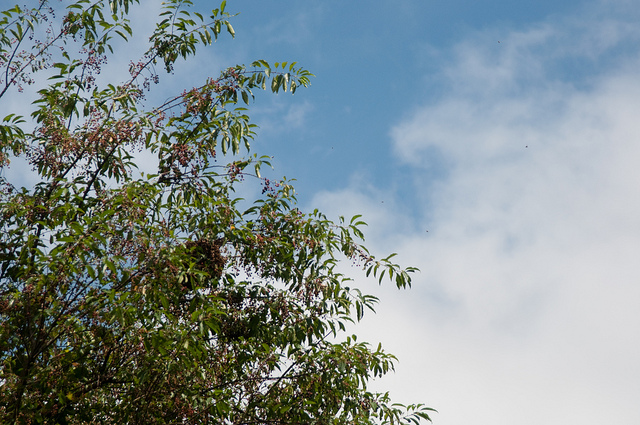 The bees in the swarm started to move around as well.  We thought that surely they would do something. But they didn’t. 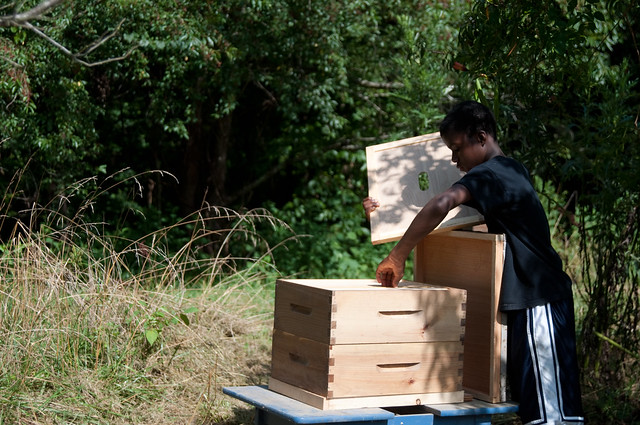 Jonny put together a larger hive, thinking that it might be more enticing than the little nuc box. 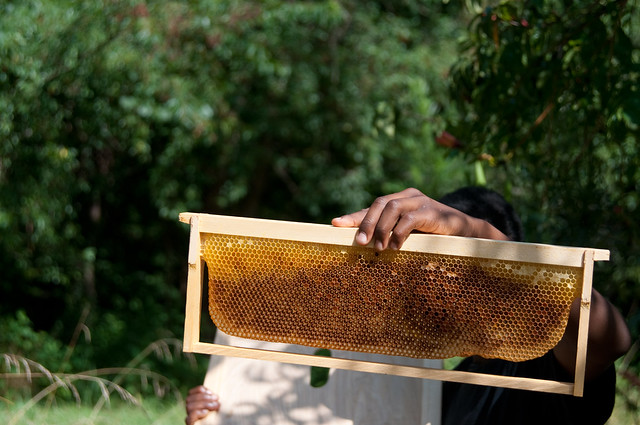 We added some drawn comb stuffed with a bit of pollen and honey to entice the bees. 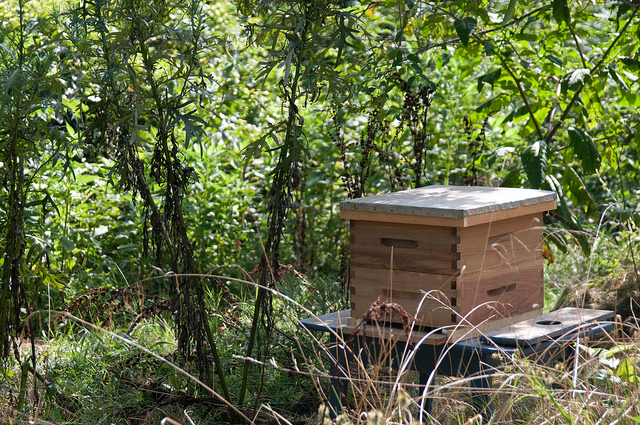 It sat for hours and we didn’t notice any scouts checking it out. 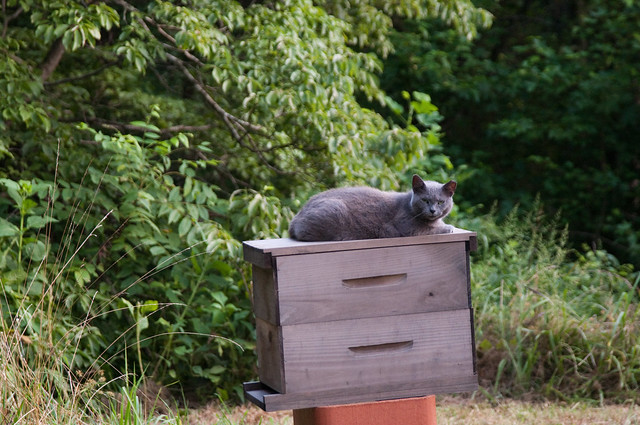 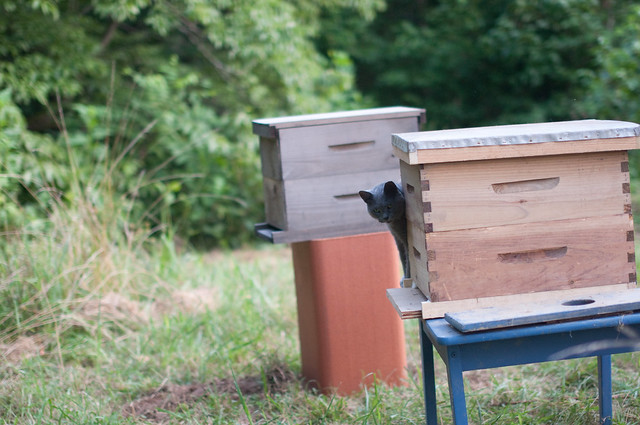 We’ve scooted the bigger one next to the smaller one and are waiting and hoping.  Monday morning we are going to try to get it elevated a bit higher. 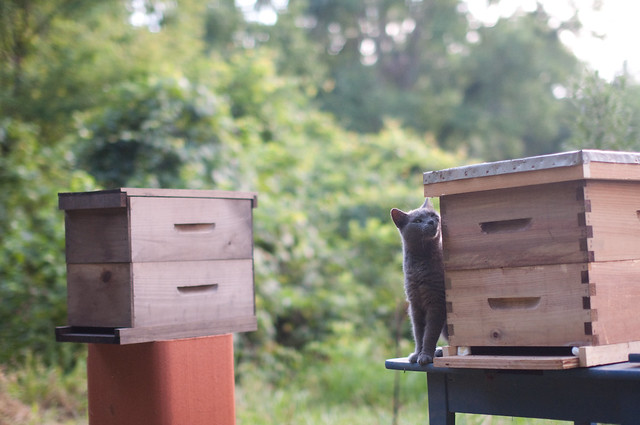 We can see the swarm from our bedroom window.  When we aren’t walking out to check on them, we are spying on the swarm from the window.  I folded laundry in my bedroom Sunday afternoon with one eye on the bees at all times.  When they move, I want to see it happen! 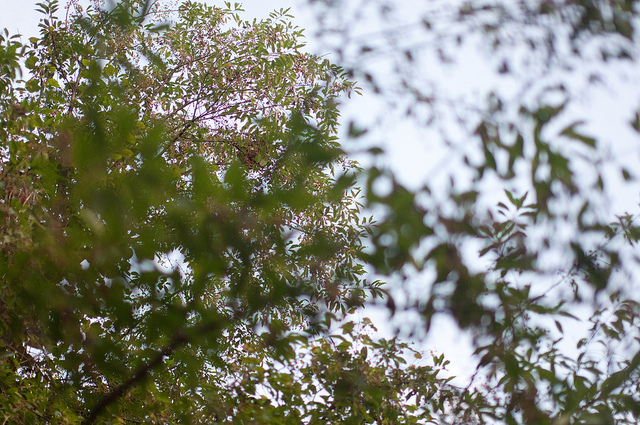 But for now, thousands of our bees are still forty feet off the ground in a cherry tree.  Oh, no!

And even if we catch them…

‘A swarm in May is worth a load of hay; a swarm in June is worth a silver spoon; but a swarm in July is not worth a fly’—for it is then too late‥to store up‥honey before the flowers begin to fade.
[1879 R. Jefferies Wild Life in Southern County vii.]

We’re trying though.  Maybe Monday will be the day.