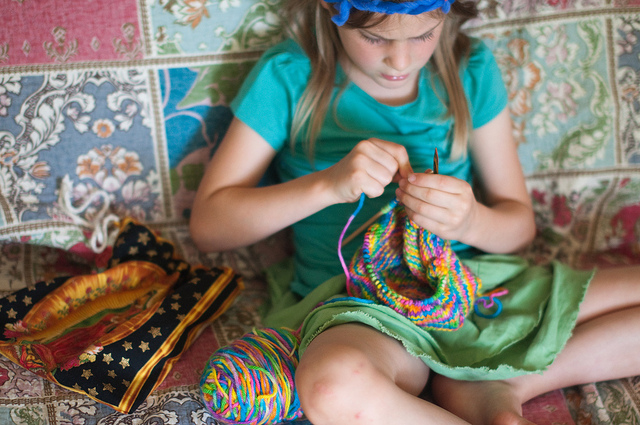 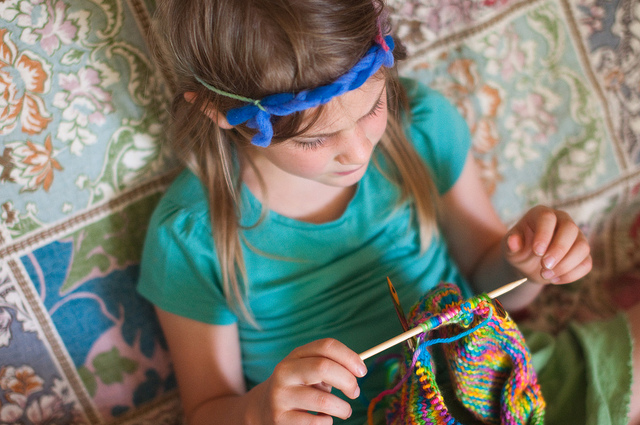 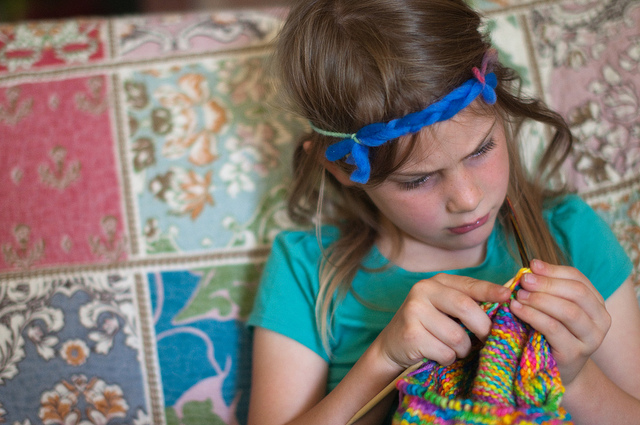 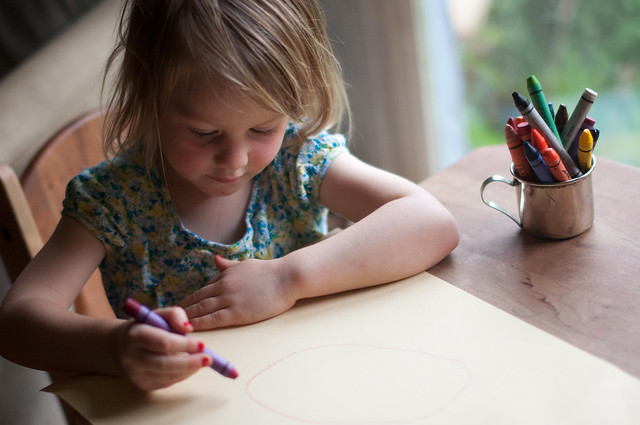 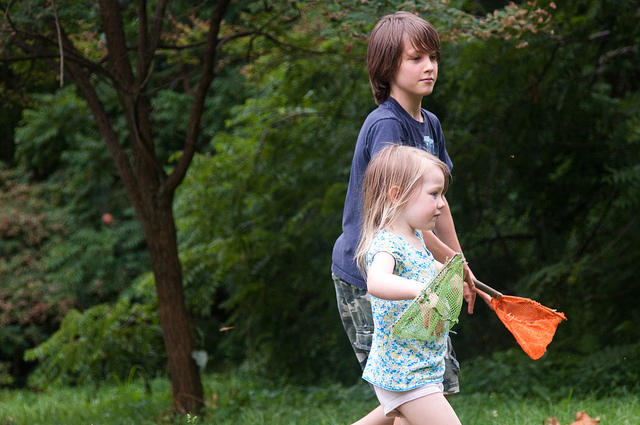 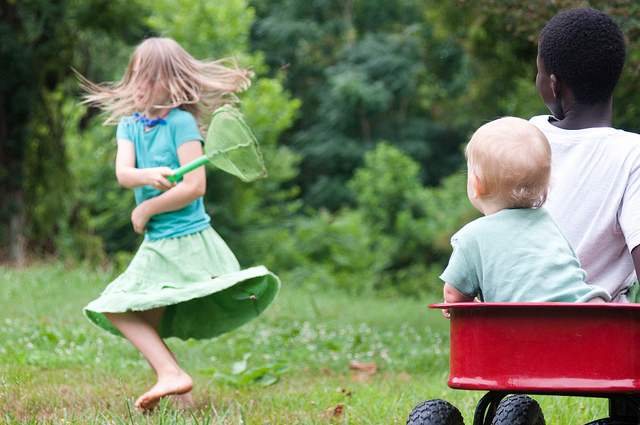 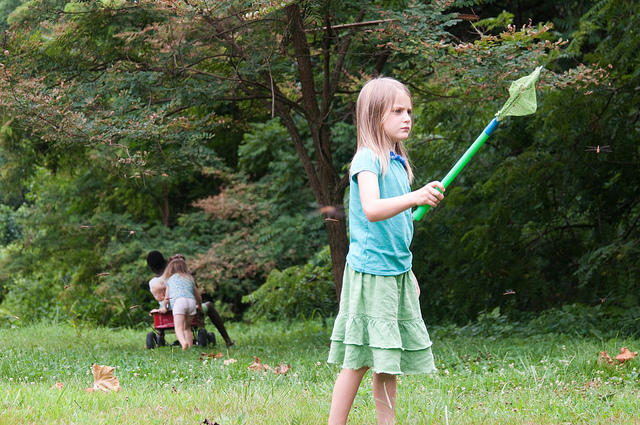 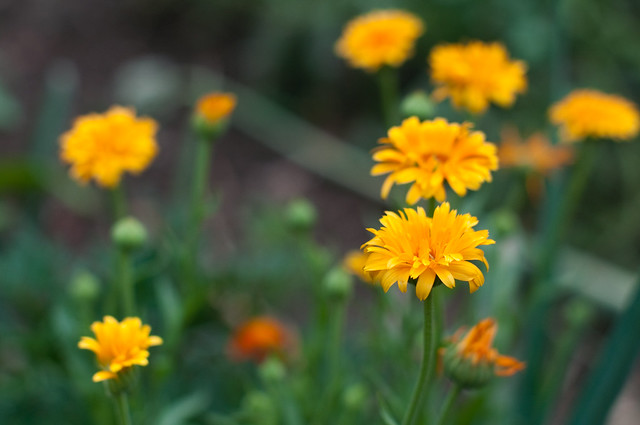 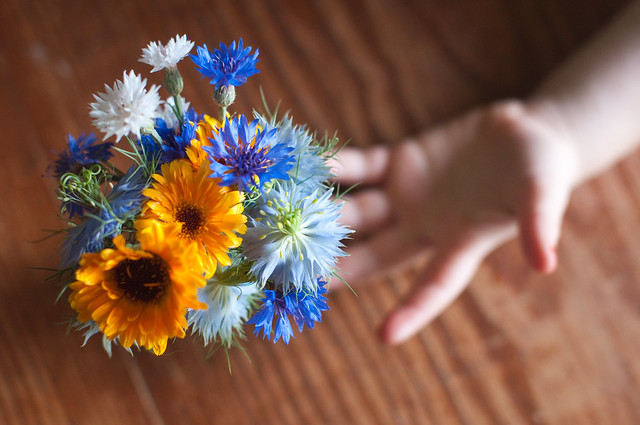 Larkspur began moving her hat stitches to double point needles today.  She knits slowly and deliberately, enjoying each stitch while giving the impression that she can hardly believe that she is actually creating them.  Her attention span is still quite short though, and after filling her first needle, she asked that I finish the move for her.  With the exception of the ribbed brim and those few stitches today, she has ever so slowly knit this hat all by herself.  And funny, even though this is her first project, she wants to give it away when she finishes.

We noticed a swarm of dragonflies near our garden today.  I am not sure that I’ve ever seen so many in one place before.  I found an interesting blog about dragonflies, and evidently the type of swarm we saw is known as a static swarm and often occurs when a storm follows a period of hot dry weather.  We had a storm last night, and it has definitely been a hot dry week.

Temperatures were a bit cooler today, so Jonny and I took a walk around our property to better survey the damage from the big storm.  A heaviness settled over me as we realized that there are large broken branches hanging dangerously from nearly every large tree in our yard, most of them black walnut trees.  The projects we had planned to accomplish over the next couple of months will have to wait.  It is going to take weeks if not months to recover from this.  Seeing my stress level, Jonny was motivated to tackle the one tree that wouldn’t require special equipment, and then helped the boys mow the grass so that things would at least look neater.  I went inside, turned on some Bob Dylan Pandora radio, and started dinner while he sang out that the times they are a-changin’.

Since arriving home, we’ve been eating food that we brought home from the trip in coolers and what was left on our pantry shelves, because I want to stick to my Tuesday grocery shopping routine.  My mom called while I was scrubbing little red potatoes from our garden, already feeling better than I had earlier.  I turned off Bob, and then shared with her my despair over the trees, but also told her that I was working hard to keep myself in the moment.  I said, “Right now, I am just really grateful for these potatoes.”

Dinner was created from a few chicken breasts, three zucchinis, a basket of red potatoes along with garlic, a red onion, and some rosemary.  All but the chicken we grew ourselves.  Never mind that I had to crawl on my stomach under the broken pergola to reach my rosemary plant.  That just made gathering my ingredients more interesting.  Never mind that we thought we were supposed to be working on a whole host of other home improvement projects over the next few months.  We’ll cut up trees instead.  Well, Jonny will.  I’ll work in my garden and try to avoid the grocery store.