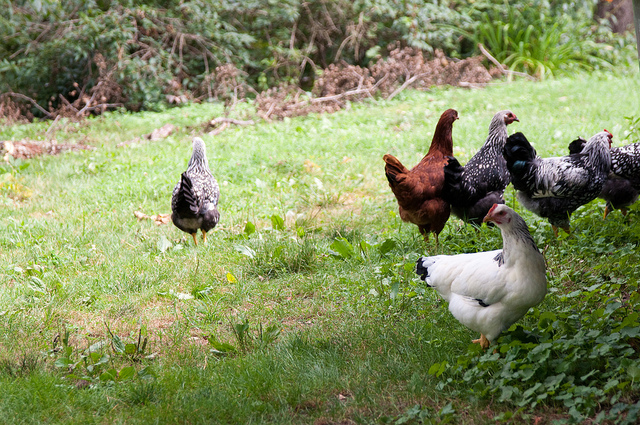 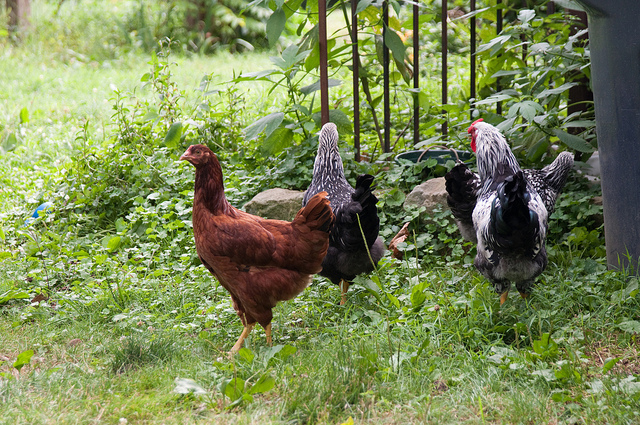 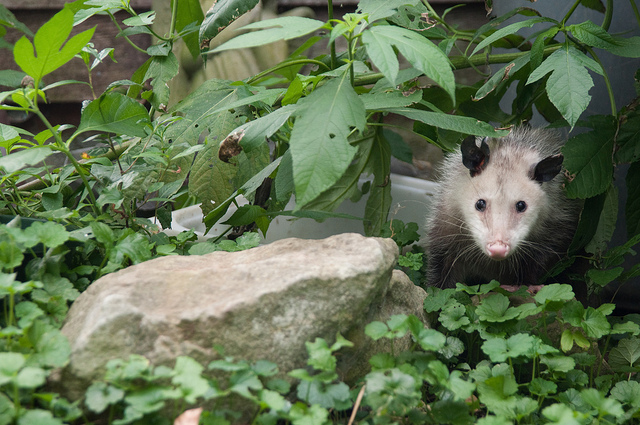 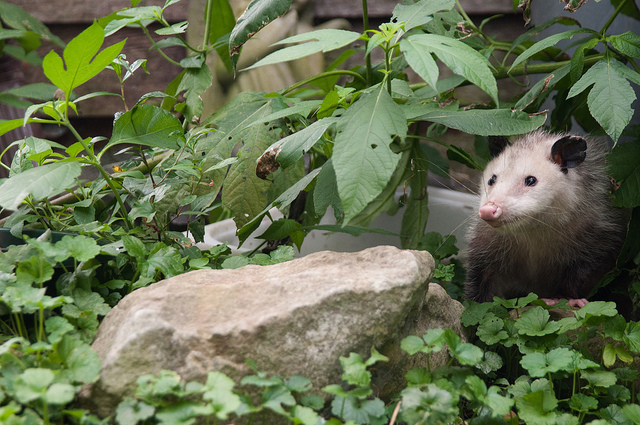 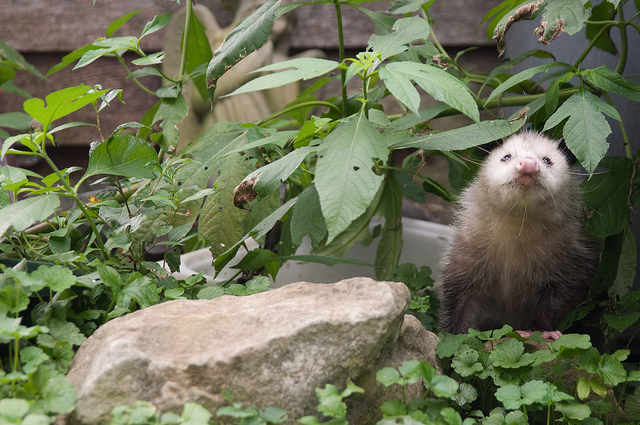 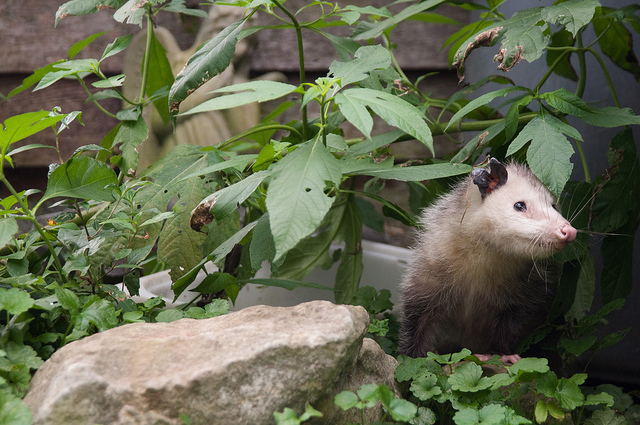 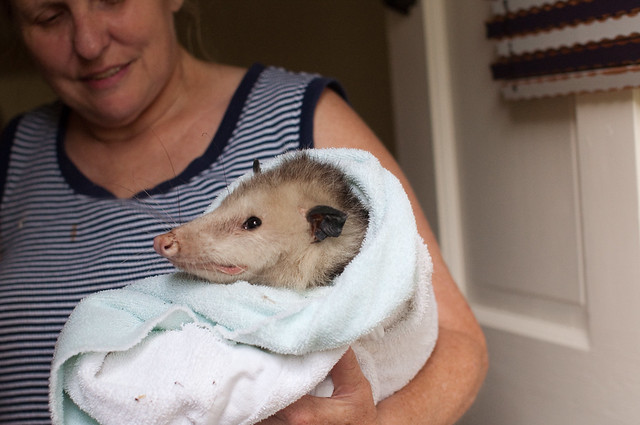 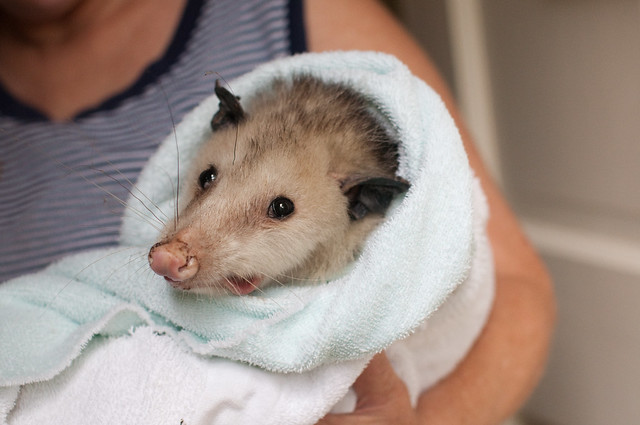 I realize that as a general rule, opossums aren’t considered to be particularly cute creatures.  So regarding the abundance of opossum photos today, I’m sorry about that. (My mom is a big fan of wildlife though, so she should be pleased.)

I was washing dishes on a recent afternoon when I looked out the window and saw a wobbly opossum heading toward our house followed by a group of very curious chickens who were keeping a distance of about three feet.  It was the funniest sight, almost as funny as watching a chicken chase a June beetle.  I grabbed the camera and headed outside while my kids yelled to me, “Mommy!  What are you doing?  Do you want to get rabies?”  (They assume that any nocturnal animal seen out and about during the day is rabid because we’ve taught them that.  Actually, opossums are rarely infected with rabies.)  The opossum had waddled to an old tray full of rainwater next to the house to get a drink of water.  It drank for some time before turning back to take a look at the audience that had gathered.  Seth hanging his head out the kitchen window noticed that the opossum had a large and very nasty wound on its back infested with….  Having already noticed that the opossum wasn’t using one of its rear legs, I sent the kids to get Jonny, telling them that we needed to put the poor creature out of it’s misery.  Jonny walked outside, not too excited at the prospect of dealing with the opossum.  The children insisted that we give it a chance.  Jonny was able to get the poor thing to walk into a big trash can where it sat, staring up at us pitifully.

I made some phone calls, and it only took a few minutes to find a wildlife rehabilitator willing to help.  It was dinner time, and I was tired and the rehabilitator lived nearly an hour away.  But what was I to do?  The opossum was staring at me with those eyes, and Larkspur who has only recently discovered that “animals are her favorite things,” was insistent.  Jonny moved the opossum into a cat carrier and Gabriel, Larkspur, Beatrix, Silas, and I headed for the rehabilitator’s house.  Were I pregnant, I would have never survived that drive.  The opossum smelled like a dead animal.  Larkspur, who is typically very sensitive about odors, didn’t complain.  She repeated over and over how glad she was that we were “saving” the opossum.  She was extremely enthusiastic about the whole situation.  Eventually we reached our destination and I was very relieved that my longest session ever of breathing dead animal smell was over.

Reaching into the cat carrier to wrap the opossum in a towel, the rehabilitator said, “You’re a kind person to bring it to me.”  I had to tell her that honestly it was the hearts of my children, not my own, that prompted me.  But as I looked into those pleading little black opossum eyes, I was glad.  I drove home so grateful for this stranger who was willing to help, who does this on a daily basis.  But really, I was most grateful for the way I knew this woman’s act of kindness affected my little girl.

That was three days ago, and today at Larkspur’s insistence, I called to check on the opossum, worried that there would be bad news.  I got a machine and left a message.  Lark, who never pays any attention to the phone, came running into my bedroom a little while later carrying it.  “It’s her!  She’s talking on the answering machine!”

I answered and inquired after the opossum.  I was hoping that if it recovered, it could be returned to our property. Evidently it’s doing great, but because of its leg injury it probably won’t be able to be released back into the wild and will instead go to live with a very nice “opossum lady” and become an “educating opossum” and have a “very good life.”  She’ll know more by the end of the week.  I am to call back then.  “It’s a revolving door here.  When you call, make sure to reference ‘Claudine.’  Her name is Claudine.  If you mention ‘Claudine With The Maggots’ I’ll know who you’re talking about.”

Poor, dear, Claudine With The Maggots.  I do think it would be cool if we could release her back on our property.  Larkspur would be thrilled.  We’ll see.

p.s.  Two other recent wild things: an Eastern newt and a brown snake. 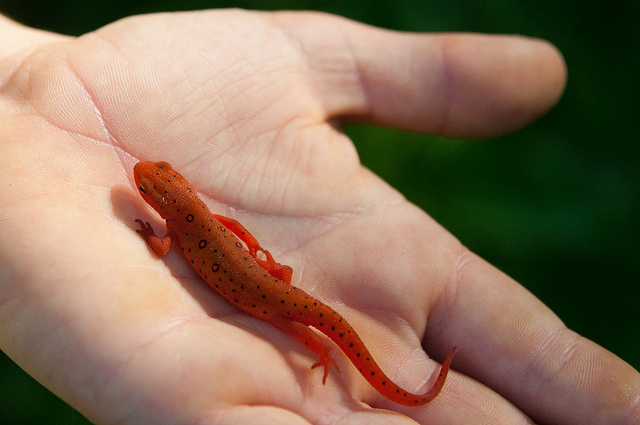 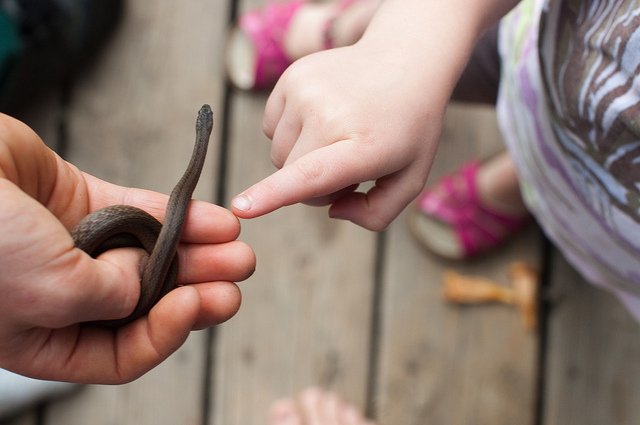