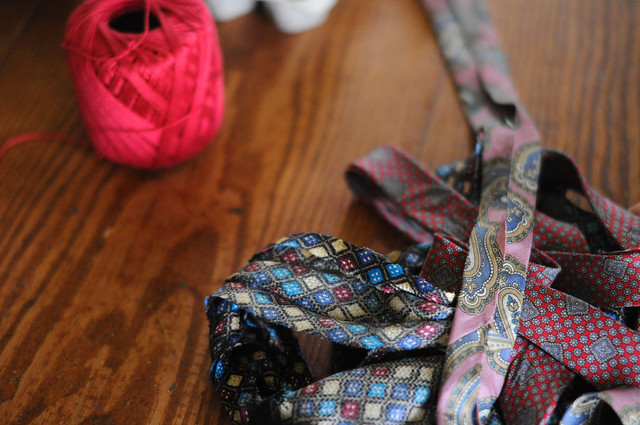 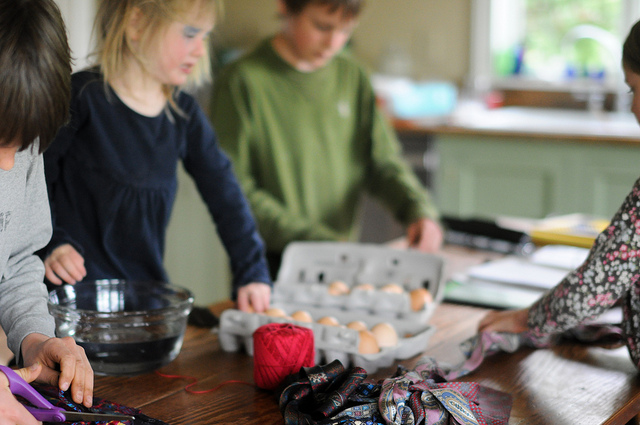 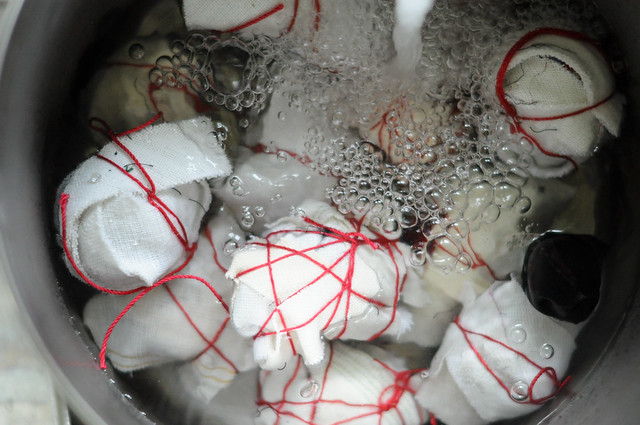 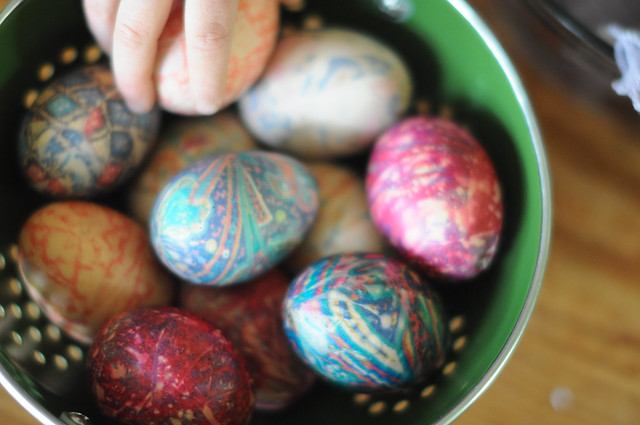 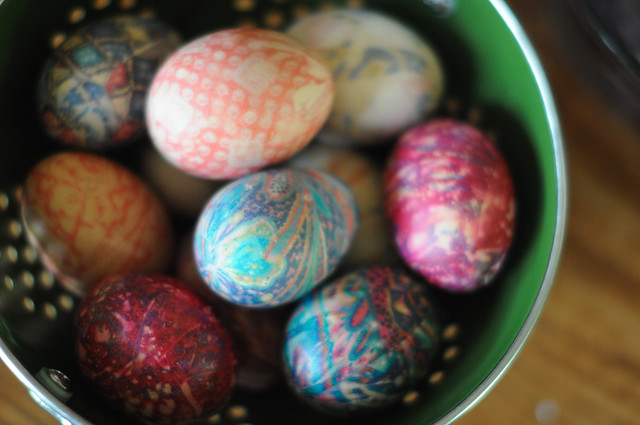 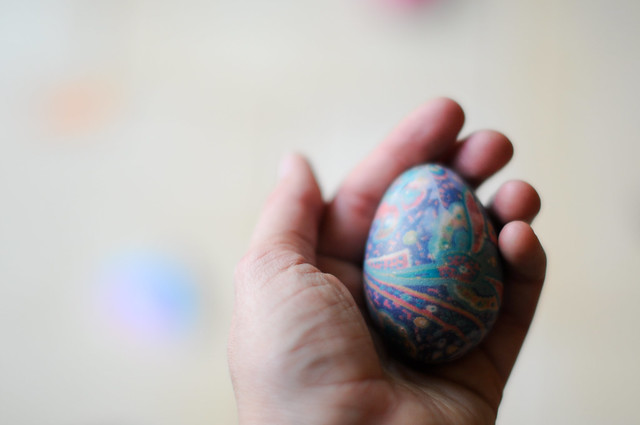 A couple of weeks ago, a friend mentioned that she and her kids had dyed eggs using silk ties.  I’d never heard of doing such a thing, so we decided to give it a try.  Keats and I picked out the brightest ties from the Goodwill rack.  I sorted through our eggs, reserving the palest brown ones for dyeing.  This project is pretty simple, but not the sort we usually do.  I tend to focus on the process when we are crafting, especially if the girls are involved because of their ages.  The only part of the process that was little kid friendly was using scissors to cut up the ties.  After that, this was mostly a mom and big kid intensive craft although it wasn’t difficult and it didn’t take long to prepare a dozen eggs.

I was preoccupied with the stink of those ties the whole time though.  We wet them before wrapping them around the eggs and that released an awful smell, that for some reason only bothered me.  I don’t think it was related to the silk, because only a couple of them really stank.  It wasn’t a random smell either.  They smelled like the inside of Bill’s house.  I am not sure if I have mentioned him before.  (I probably have.  I’m bound to start repeating myself here at some point.) Bill was an elderly man whom I was enlisted to help about six years ago, back when I did a lot of catting around as Jonny calls it.  Bill lived alone in an isolated little old house.  As I pulled up to his house for the first time, I watched cats fly off his front porch and into the trees surrounding the property and knew I was at the right place.  Around back another bunch of cats went flying as I approached.  Over the course of weeks, I humanely trapped and transported all of Bill’s cats to the vet to be spayed or neutered.  In all honesty though, I was more concerned with Bill than I was his cats.  I became extremely fond of him (I wanted to buy a house with in- law quarters to move him into.  Dear Jonny actually took these wishes of mine seriously.) Bill lived in what I can only describe as deplorable conditions, but beyond letting me clean up his kitchen a few times and take his laundry home to wash (he didn’t have running water) he wouldn’t accept much help.   Jonny and I did what we could.  Bill didn’t have family, but nearby neighbors eventually helped him get moved into a local nursing home.  It took me weeks, but I eventually trapped all of his cats again, and moved them to new homes on farms.  His two favorites, “Tweety” and “Nubby,” the only friendly cats in the bunch, ended up on a really nice horse farm.  Bill died before I could take him out to the farm for a visit.

It wasn’t my intention to turn a story about doing crafts with my kids into a total downer.  I just couldn’t leave out that connection.

Back to the craft:  The best part was unwrapping the eggs.  Larkspur and I did that part together and we oohed and aaahed at how cool some of the eggs turned out.  Here are the directions if you want to try some of these yourself!  This really is a pretty neat way to dye eggs! 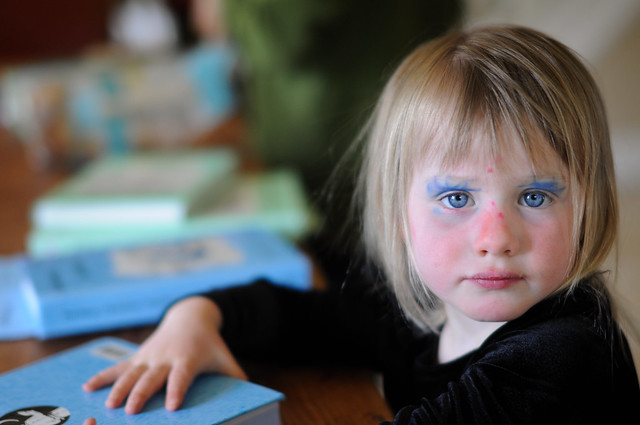 p.s.  In case you wondered what was wrong with Bea’s eyes in the second photo from the top, here’s a better look.  Larkspur gave her long luscious blue lashes this morning with a marker.  I keep meaning to put a ban on markers at our house, but never follow through.  (And the random pink spots are chicken pox of course.) 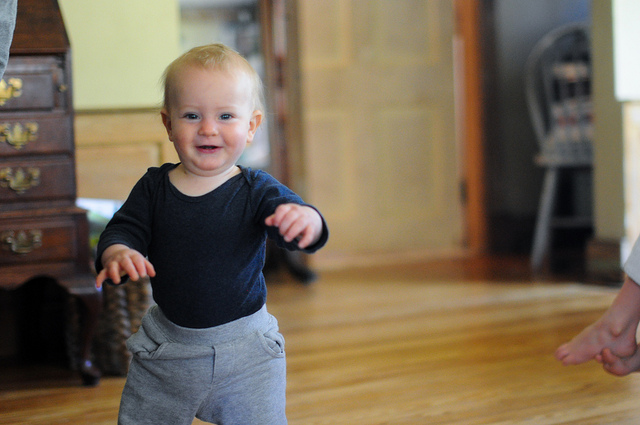 p.p.s.  This has been going on for weeks now, but I am sort of in denial and haven’t wanted to talk about it.  Most of my babies walked around their first birthday (I think?) with the exception of Larkspur who waited until about fifteen months.  Silas started taking a step here and a step there at 9 1/2 months.  I pretended not to notice.  Now, at 10 1/2 months he’s walking half the time and I cannot deny it anymore.  It’s ridiculous and adorable and he thinks it’s the best trick. 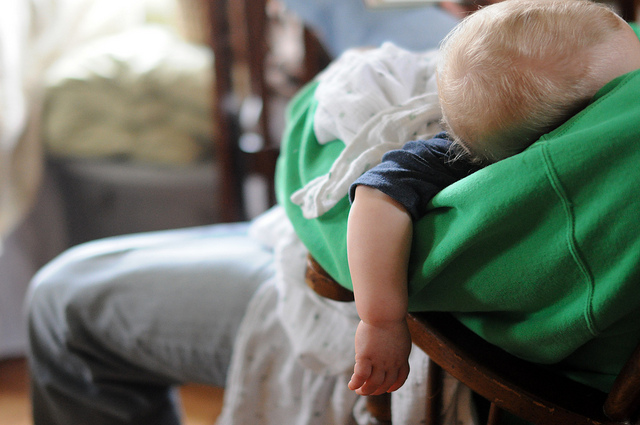 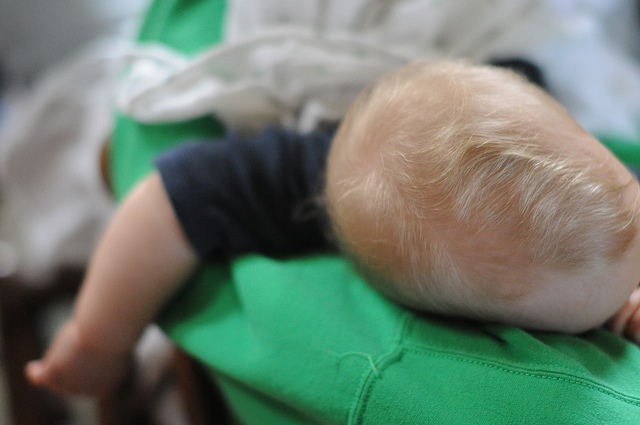