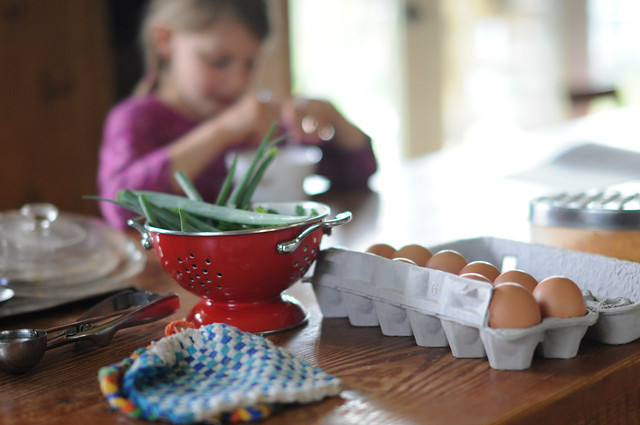 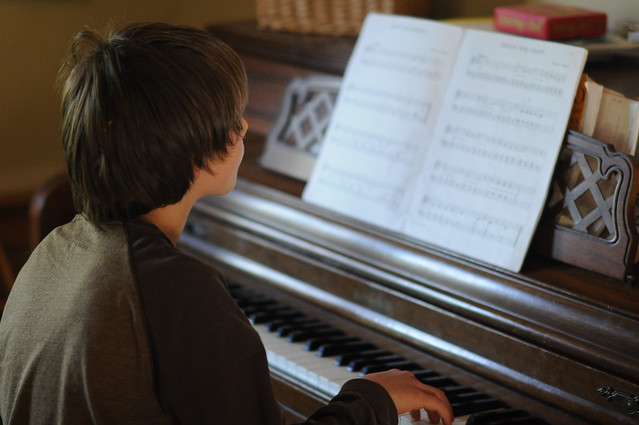 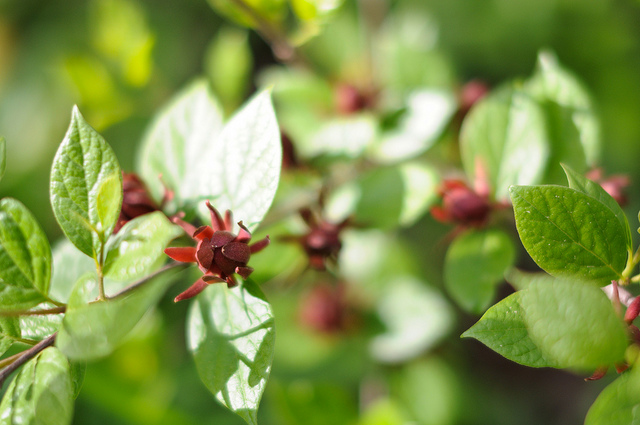 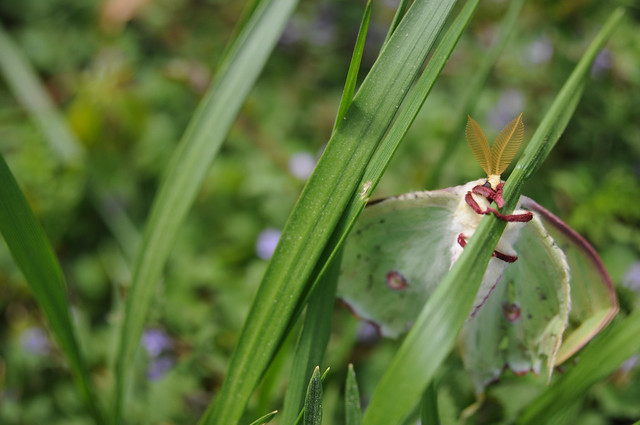 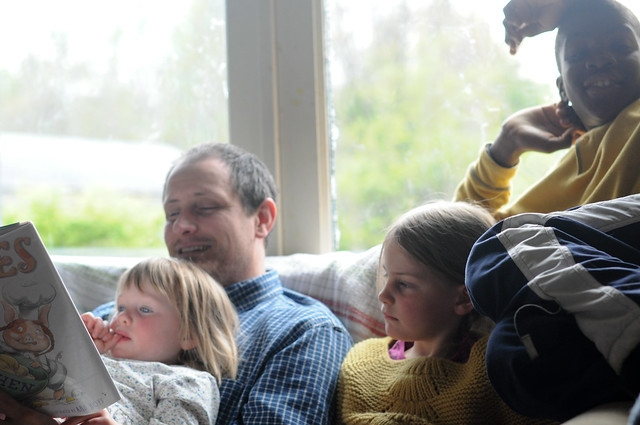 I’ve had an oddly intense week.  So odd that I’ve just got to write it all down.  The combined impact of everything has me feeling rather quiet and introspective, which seems an appropriate way to move into Good Friday.

Last week one of my wisdom teeth made an entrance, causing me enough discomfort that I visited the dentist on Friday to have it pulled.  I am not a fan of that sort of thing (who is?) and while I had expected it to be no big deal like the last time this happened, it actually was sort of awful this time around.  But, a bit of Tylenol here and there I was fine.  I am fine.

But then, Monday night, I had a bit of a scare.  It wasn’t related to my tooth though.  I bumped my knee on our kitchen table and managed to hit whatever you call the “funny bone” part of my knee.  Jonny was sitting across from me at the table when it happened.  I remember him chuckling at me after I remarked, “I think I’m going to pass out.”  Because who bumps their knee and passes out?  Evidently I do.  I passed out and then had what appeared to Jonny to be a seizure.  Thankfully, he saved Silas from being dropped, and me from injury.  This sounds alarming doesn’t it?  Jonny and I were a bit alarmed.  Well, I was more disoriented than alarmed.  A quick phone call to my favorite doctor, and I was reassured that I needn’t worry.

An old college friend messaged me on Facebook out of the blue yesterday.  I haven’t spoken to her in ten years or so, not since we moved to Virginia.  We had what I would describe as an intense friendship.  I think she would agree.  We ended up chatting on the phone for a little while yesterday but only about details surrounding a possible move for her family to my neck of the woods.  I was happy to hear her voice.  I wonder if I’ll hear it again.  The way God moves people in and out of my life…you just never know what’s going to happen.

Today on the way to the library with all my kids, my boys were gleefully recounting as many of my traffic violations and fender benders as they could recall.  Seconds later, I rear ended someone.  I won’t go into the somewhat humiliating details.  No one was hurt (I was moving at like 5 mph.  Good grief.  Learn to stop and go Ginny.  It’s not that tricky.)

Later, once we arrived home, I called my good friend Lori.

She asked, “Are you calling to talk about your crazy seizure?”

“No, I just rear ended someone today.  I wanted to talk about that.”

“Oh, yeah, I did the same thing recently.”

I felt better after talking to her.  I always do.

Jonny struggles with my little run ins with bumpers and fences and other things that jump out in front of me when I’m driving.  It might be because sometimes these incidents cost money.  Today’s didn’t.  Phew.

I told Lori that I just ought to stay home.  Right now one of my favorite activities is to walk around my yard looking for my honeybees.  This seems a nice safe choice.  Were I a lady of leisure, I could wander around all day with a small knitting project in my hands and a camera around my neck.  Obviously, I’m not.  Five minutes here and five minutes there though, it does me good. 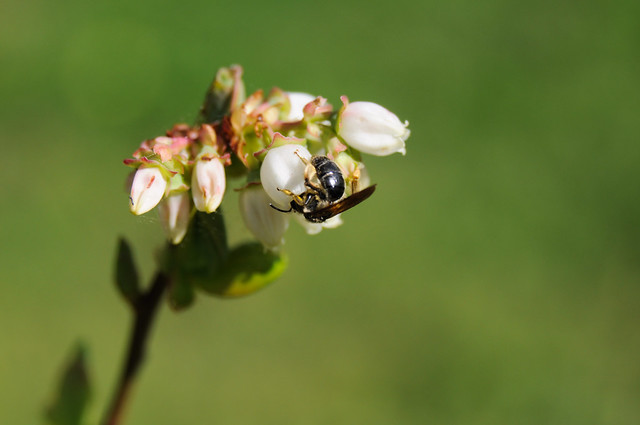 (this is not one of our girls) 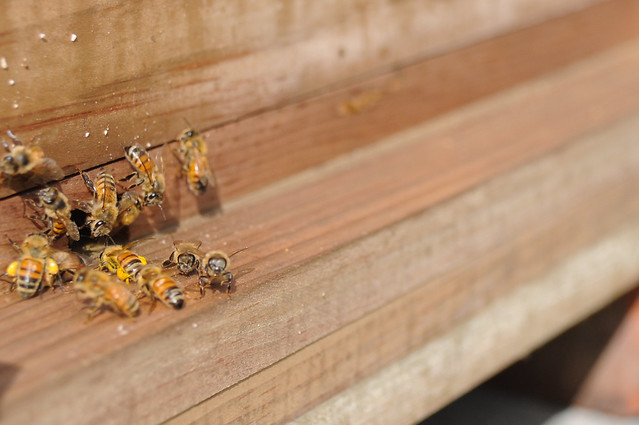 I’m not sure where the girls are hanging out, but they are arriving back at their hives with nice fat pollen baskets.  I tried to get some photos today.  We’ve named our hives Lark Rise and Candleford.  The Lark Rise bees are quiet and nice.  The Candleford bees are ornery! 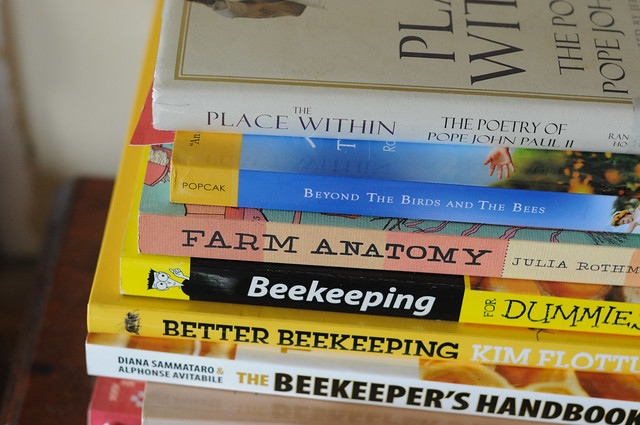 p.s.  Sort of off topic, but this stack of books is kind of amusing.  The top one is unrelated, a book of poetry by Blessed John Paul II

that I picked up at the library today.  It’s the copy of Beyond the Birds and the Bees

mixed in with all the beekeeping books that is funny.  Jonny’s been reading it in the evenings, and thinks it blends in nicely with the other bee books. 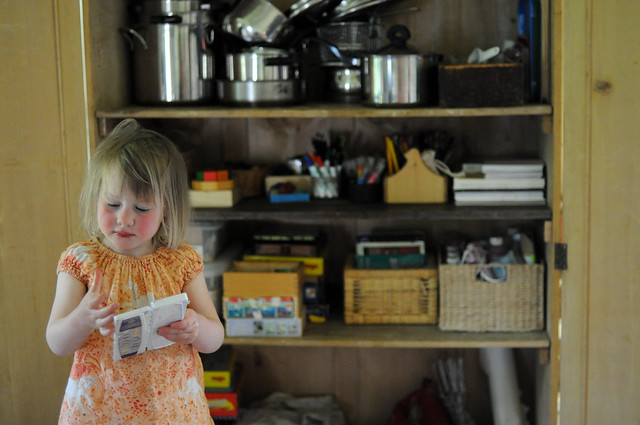 p.p.s.  I’m supposed to be working on Easter dresses for the girls during my “free time.”  Instead, I’ve been cleaning out cabinets and drawers.  Seems this is a necessary task every few months. 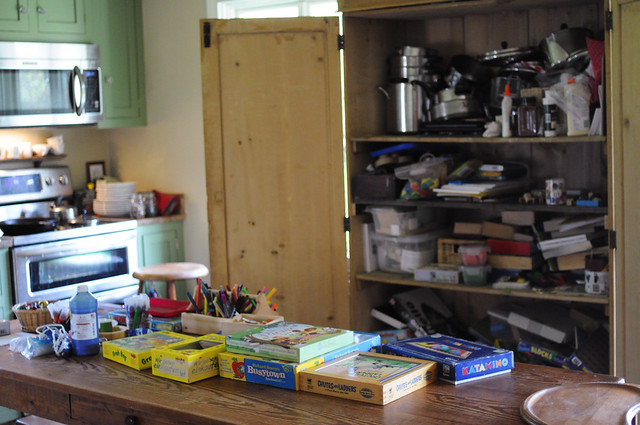 Here’s a “before” shot.  I realize the pots and pans are pretty much unchanged in the after.

Have a blessed Easter my friends!