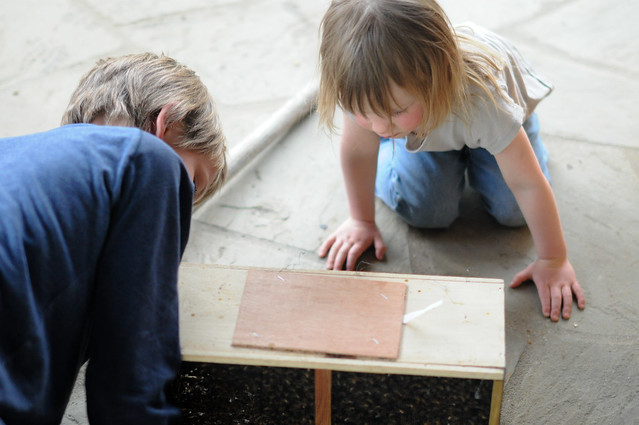 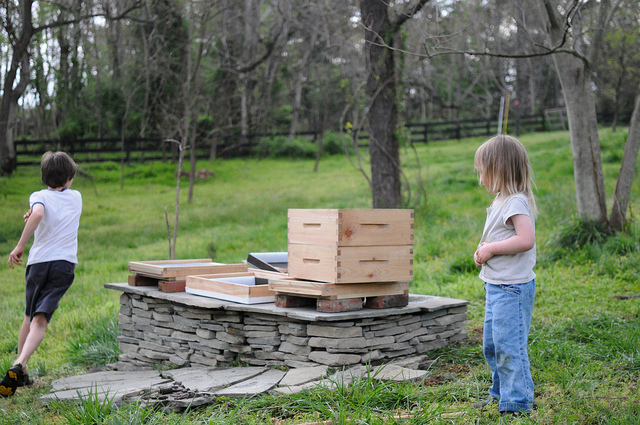 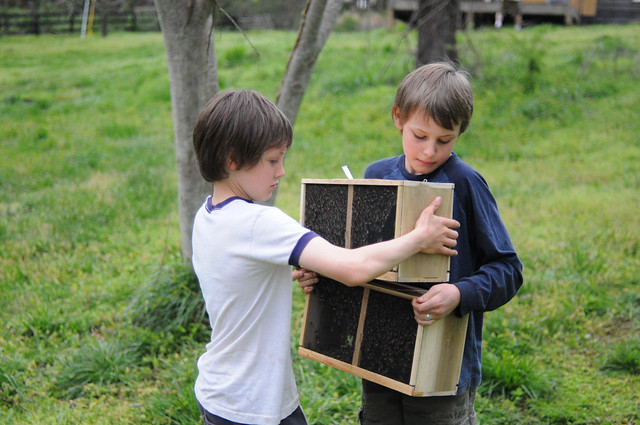 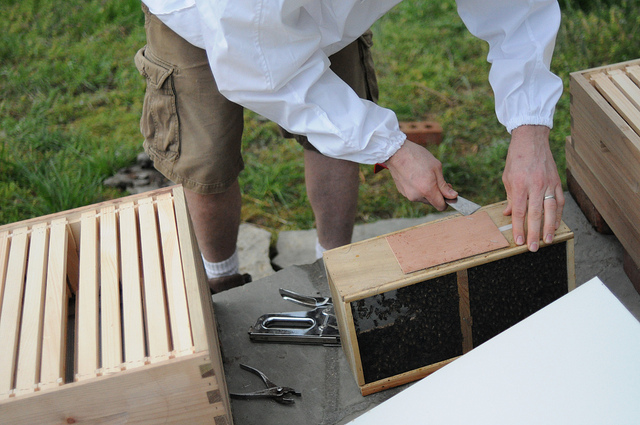 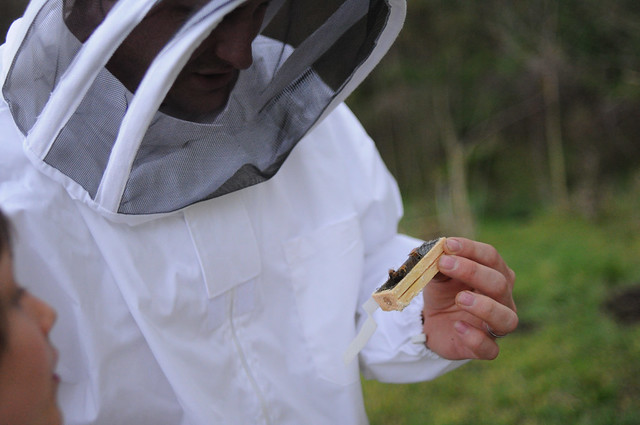 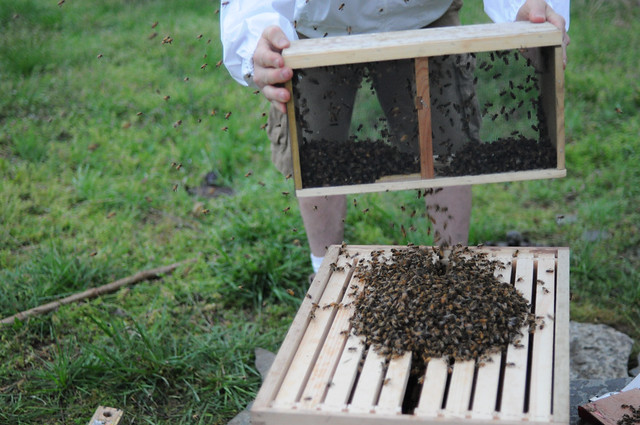 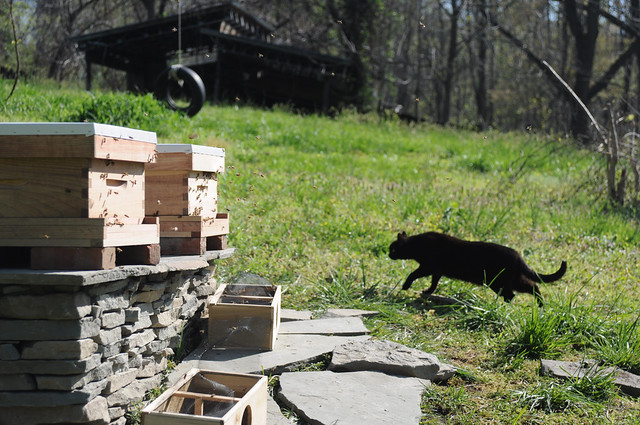 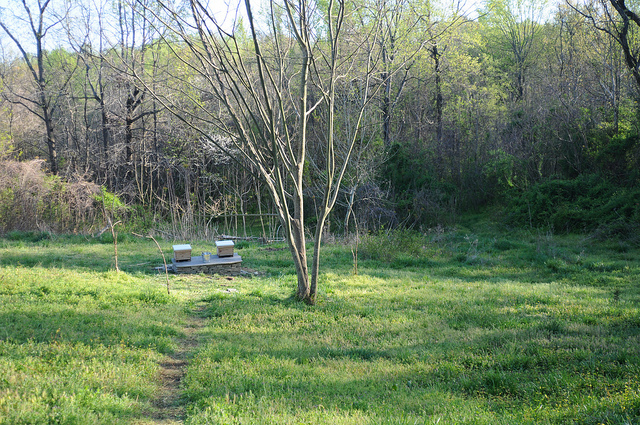 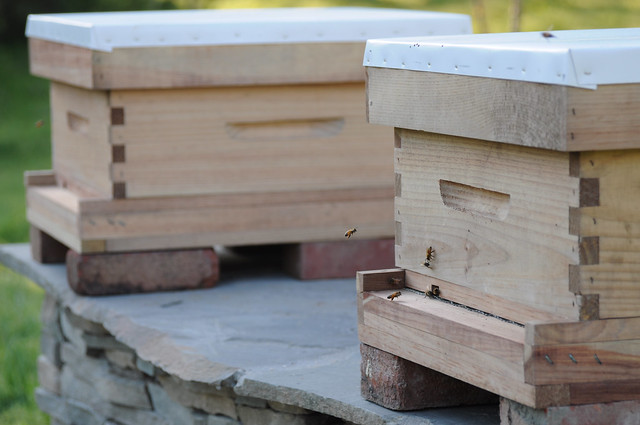 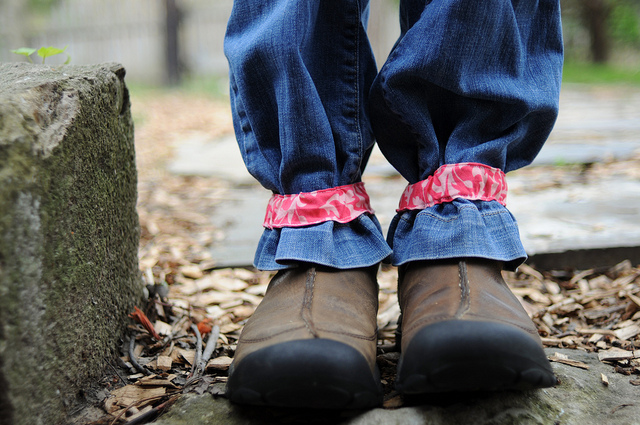 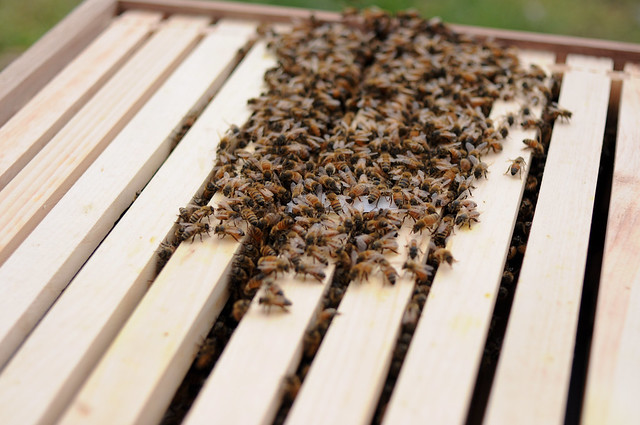 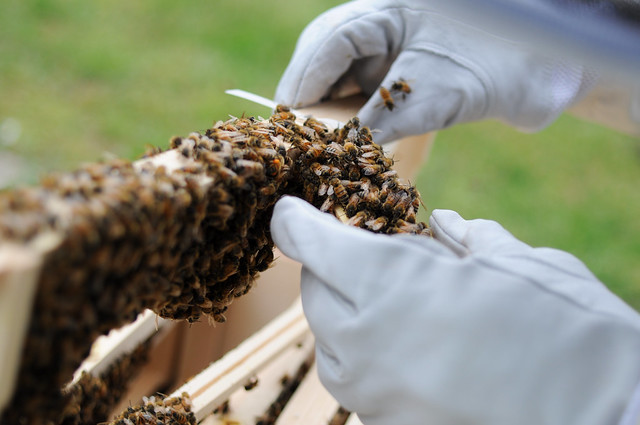 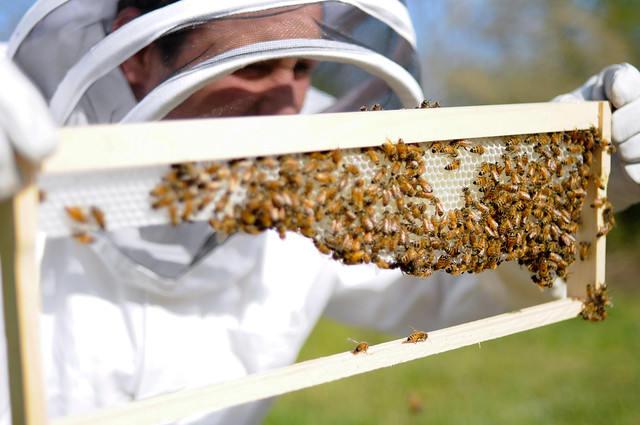 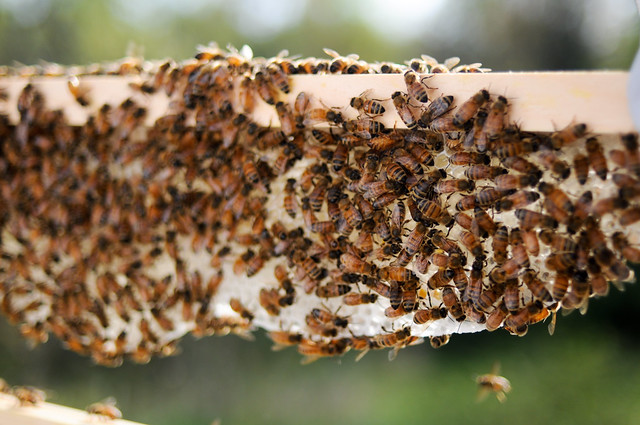 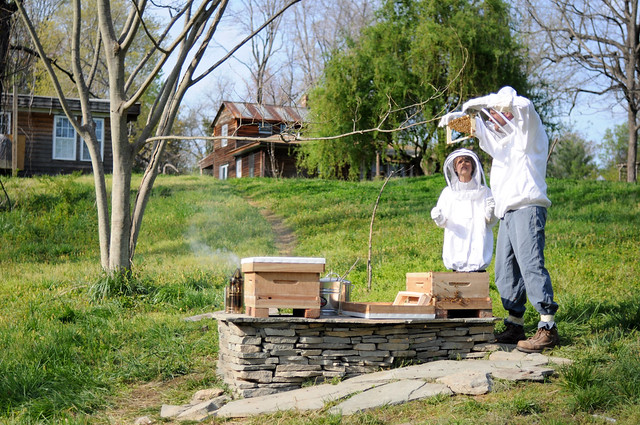 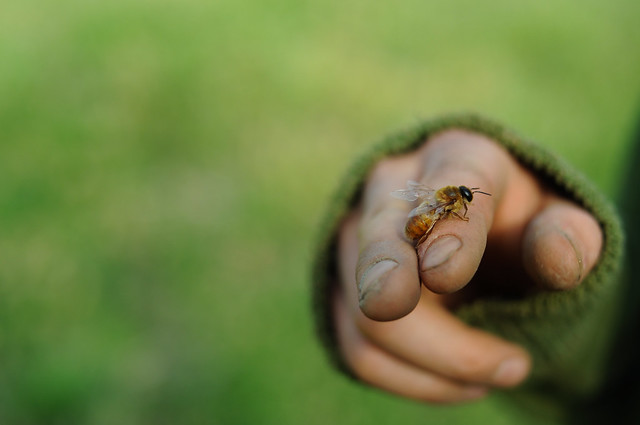 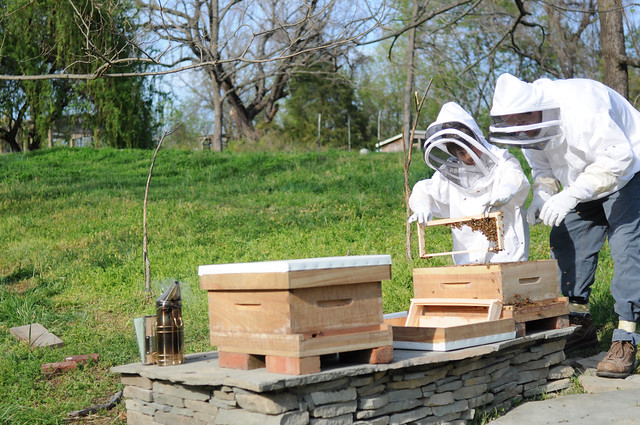 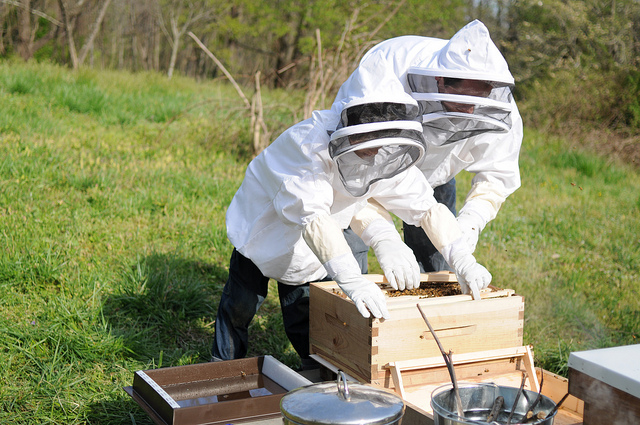 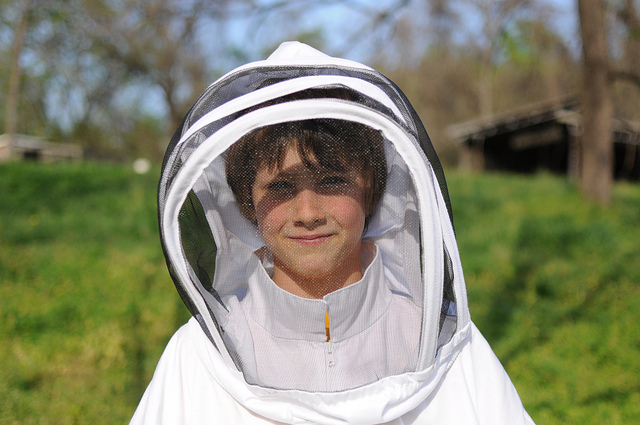 Jonny and I have found a new obsession.  I am going to do my best not to bore you all with it on a regular basis, but goodness, why did we wait so long to get bees?  I explained to a close friend the other day that this is the absolute perfect nerd outlet for Jonny and I.  Beekeeping encompasses many of our interests and there is so much to learn.  Oh, and the kids!  With the exception of Seth, who claims that he just can’t get interested in being stung by bees (ha ha! but he’s reading all the books and will help eventually with the honey side of things) everyone wants to be a part of this!

These photos were taken over the course of the past five days, beginning with the day that we picked up our bees (they’re in order chronologically.)  As of Sunday, everything is going very well; our bees are drawing nice comb and one of our queens is already laying eggs.  We’re ecstatic.  The installation of our packages was a little rocky though, and I thought I would let Jonny tell that story.  I’ll insert my two cents in aqua here and there.

Where to begin?  I can’t remember exactly, but shortly after we moved into our wee house and made our first garden, we started to talk about getting bees.  I bought Ginny a couple of books about beekeeping for her birthday.  She never read them, but I did.  (I was home with three small children.  He had a long train commute.)  A few weeks ago, with spring truly coming on, we finally decided to go for it.  I searched for a local bee supplier and called him up to see what the dilly was about getting bees for this year.  His reply was, “Ha! You better hurry up!”  So, without much thought I gave him my credit card number and reserved two packages of bees.

Fast forward.  I’ve been working like a mad man lately, so I haven’t had time to get anything ready for the beekeeping party.  Ginny took it upon herself to get the hives prepared by sealing them with some sort of eco wood finish hippie juice.   It was up to me to get a place set up in the yard for the hives.  (I was envisioning concrete blocks with boards across them.)  Because I knew that these hives were going to be photographed regularly, I wanted them to have a visually appealing resting area. (Whatever.  This was all about him.  He just wanted an excuse to start another project.)  So, I used some of the flagstone left over from the two and a half year porch makeover, and created what I hope will be a nice home to our new friends.  I’m very pleased with the way it turned out.  I was able to make it in less than two days.   Not sure how, seeing as how long it took to do the porch.

So, the morning of bee package pick up day began with a nice breakfast and then me rushing outside to finish the afore mentioned visually appealing resting area.  By the time Gabe and I finished setting the top pieces and mortaring the joints, it was well into the afternoon.We had a little less than an hour to drive to get the bees; Ginny was becoming very antsy. (I was a little annoyed at him for creating this crazy fancy thing last minute.  It seemed ridiculous.  I bit my tongue, but he could see me squirming.)  She tends to get that way when I float around in a daydream taking my time existing.

As we drove to get our bees, we noticed lightning in the distance.  Ginny remarked that bees are very sensitive to barometric pressure and become very grumpy on days like this.  She explained to me that you should never work bees on this kind of day. (I’m hardly an expert.  In fact I have no idea what I’m talking about.  Sue Hubbell just mentions this in A Book of Bees.)

When we picked up our packages, Ginny asked if we needed to put them in tonight, or if we could wait.  He told us we could wait, or put them in.  Being the man of the house, I decided it was best to go ahead and put them in; ignoring all things barometric.   By the time we made it home, it was getting on into the evening.  I still had to add some starter strips to some of the frames, so I headed back into my daydream bliss. (bee guy thinks we’re crazy for going foundationless and convinced us to add cut comb wax strips to a few frames) When that was done we got the hives all set up and all the tools ready.   We’ve heard from everyone, and read in all the books, that you don’t really need to worry about package bees. They are confused and not feeling territorial, and we noticed that lots of people don’t wear gloves while installing them.  Well, since this was the case, I figured I didn’t need to wear pants either. (just want to clarify–he did wear shorts) Anyway, it was getting late and a storm was just around the corner, so I didn’t want to waste any more time.

The sky was getting dark when I started to work on the first package.  (“Jonny, are you sure about this?  It looks like it’s going to storm again.”) Gave them a little squirt of sugar water.   Pried off the cover.  Pulled out the staple holding the queen cage to the package.  Gave the package a little bang to shake the girls off the feeding can.  Lifted out the can.   Took the queen cage out.  Covered the hole in the package with the cover.  Thinking to myself, “Who’s a rockstar!  No gloves! Booyah!”  I stapled the queen cage to a frame in the hive so that it was hanging nicely.   Gave the package another bang.  Rain started falling.  No biggie, just some light misting.  Another bang.  Take off the cover and pour the 10,000 or so bees into the hive just above the queen.  Here’s where it gets fun.   I just poured out 10,000 somewhat confused but grumpy girls.  10,000!  Remember…the whole barometric thingy Ginny was telling me about.  Agitated…bad mood.  (But really, we have no idea what the difference is between “normal” bees and “agitated” bees.)  I really didn’t expect them to get all over me.  Don’t know why I thought that.  But, everything I read just kind of made me think that they would just fall out of the package and hang out where they fell.  But, they didn’t.  They went all over the place.  I’ll admit, it was awesome but it momentarily freaked me out.  I gave the package another bang and shook out as many of the rest as I could.  Then I laid the package down and took a step back.  At this point I was surrounded.  (that “light misting” meant that bees were crawling on us rather than flying around.)  I got stung.  Right on the back of my leg.  The rain started coming down much more.  I backed up.  I got another sting, right on the back of my other leg.  And then another.  At this point I wasn’t thinking about my legs so much as my boxer shorts.  Not a good thought.  I bailed and left my wife all alone.  (I was panicked about the rain and the bees getting wet.  I couldn’t put the lid on the hive because the bees were sitting in a pile on top of the frames and I was afraid to squash them.  So I stood there abandoned in the rain holding the lid over the bees like an umbrella and tried to ignore the fact that they were crawling on my bare hands.  It wasn’t my best moment.)  After a few minutes Ginny was able to get the bees settled into the hive enough to put the cover on.  She walked back up to the house.  “You left me.”  Bad husband.  I had put some pants on.  I also went ahead and grabbed my gloves and Ginny’s.  The rain stopped.  We laughed about how not smoothly that install went.  It was kind of like we just showed the world how not to install a package of bees.  The whole trying to beat the rain thing was a bad idea.  But, now the rain had stopped, so we decided to attack package number 2.    This time I took a couple of frames out of the hive so that there was more space to dump the girls.  It worked about a bazillion times better.  Instead of piling on top of the frames, they went down into the hive.  There weren’t nearly as many airborne.  After about 10 minutes I replaced the frames, put the feeder on top, filled it up, and put the cover on the hive.  Install number 2 complete.  Ginny got stung on the ankle.  (Not anymore though.  I sewed fashion elastic leg bands for my pants, although bees around the ankles hasn’t been an issue since that first ill fated day.)

When it was all said and done, Ginny and I couldn’t stop from smiling.  There is definitely something euphoric and exciting about these girls (he doesn’t really acknowledge the drones-the boys.)  I’m pretty sure that we have just taken the first step in a hobby that will be with us for the rest of our lives.  (YES!)

I think I had a total of four stings.  I’m not sure what kind of fool actually tries to tend bees with shorts on.   But, I’ll blame it on being too punk rock for my own good.