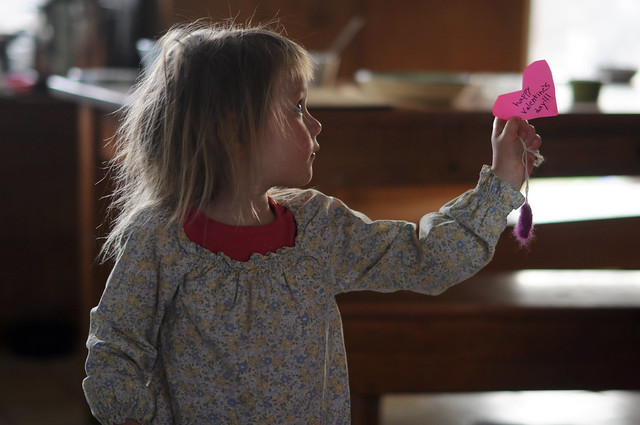 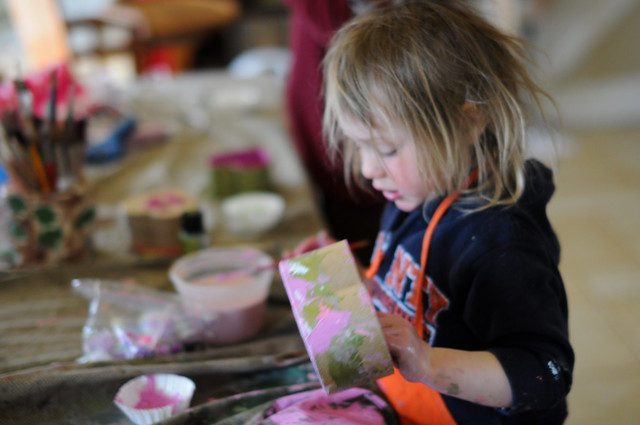 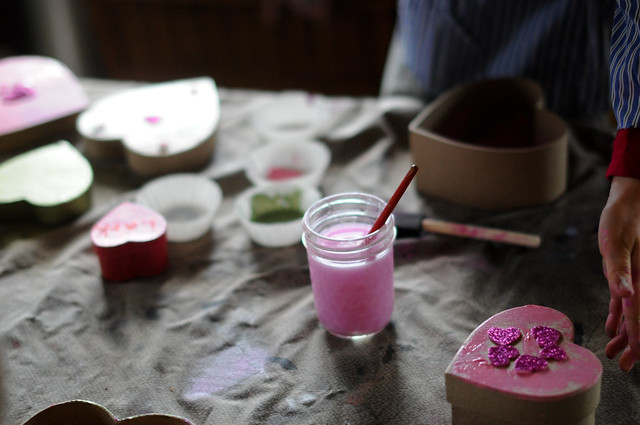 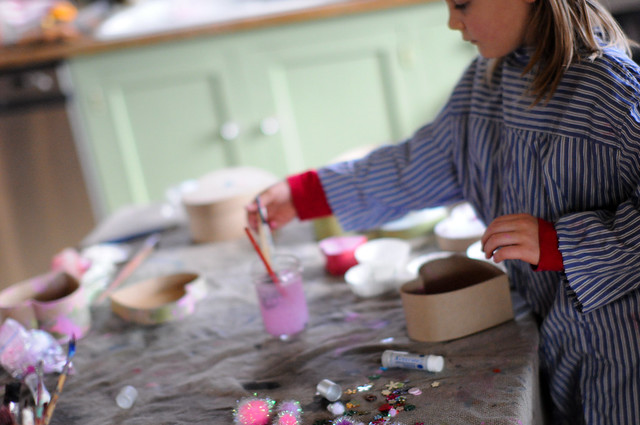 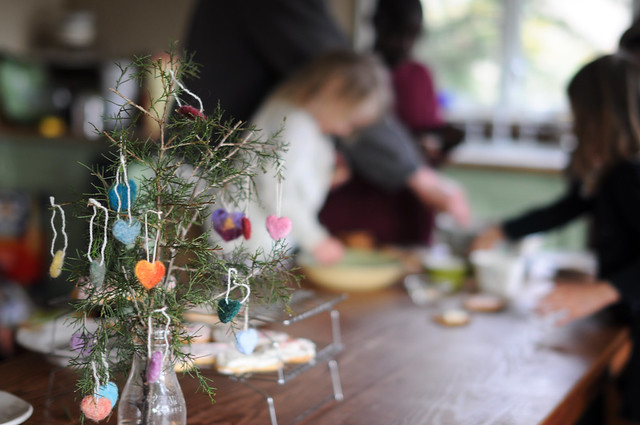 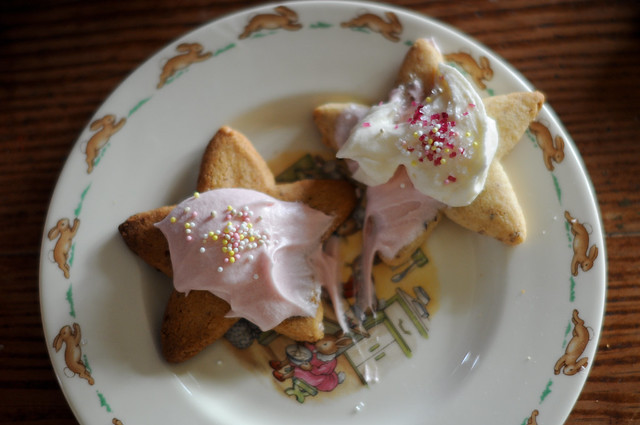 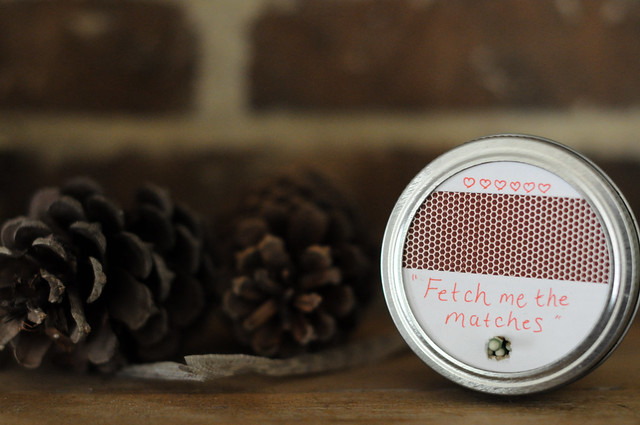 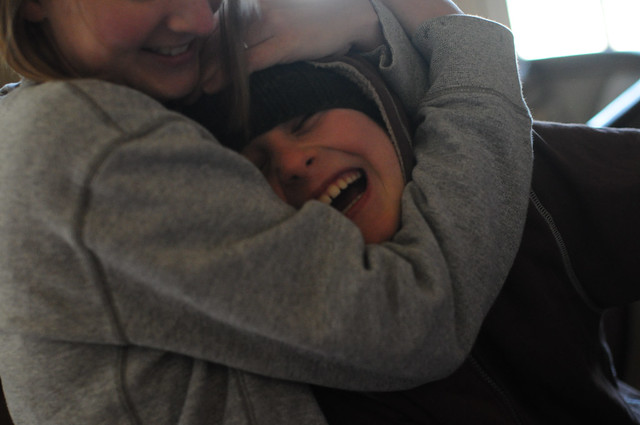 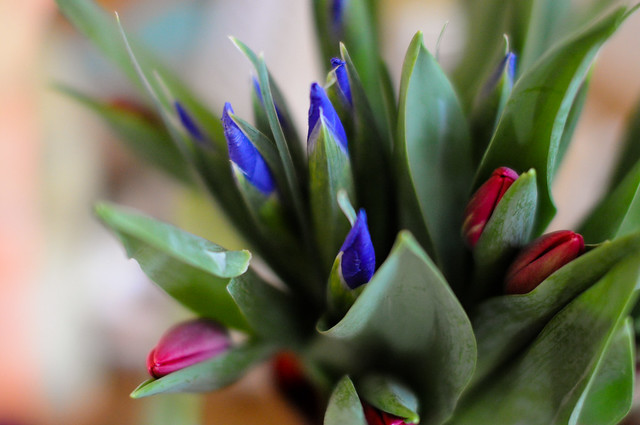 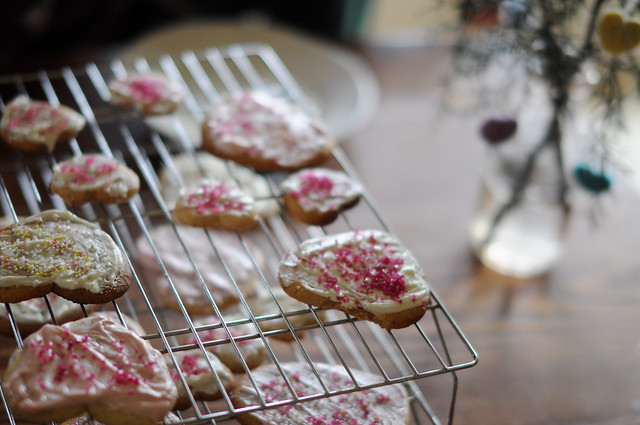 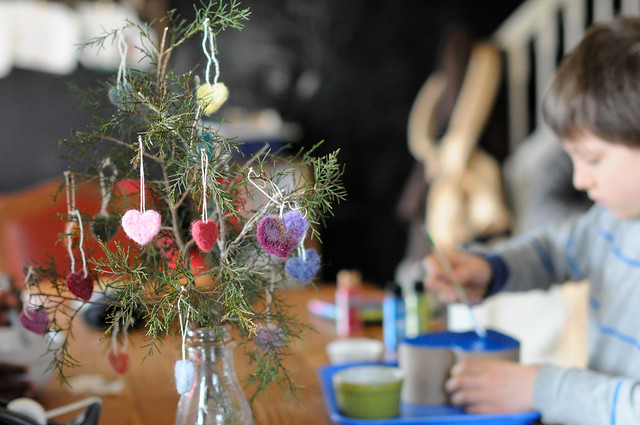 We received a surprise package in the mail this weekend.  My dear friend Elizabeth sent everything we needed to paint and decorate heart shaped boxes.  There was no small amount of shrieking from the girls as we peered into that box.  Elizabeth had no idea that a heart shaped box is on Larkspur’s birthday wishlist.  Yes, indeed.  Larkspur promptly brought me her list, asked me to show her where daddy had written “heart box” and carefully crossed it off with a pencil.  It took me a few minutes to process the fact that on a week that she had a surgery scheduled, somehow Elizabeth managed to send not only my family a box like this, but at least one other friend that I know of.  I wanted to thank her with beautiful photos of the girls and I working on these boxes together.  I want her to know how much her gift meant to us.  But, over the weekend I spent most of my time caring for a teething baby, and my girls decided to take matters into their own hands.  I came downstairs Sunday afternoon after putting Si down for a nap to find that Larkspur had covered the table with an old sheet and spread out all the supplies that her “knitting friend” sent.  She and Beatrix (who had dressed herself in Silas’ clothes that day and clearly had not met with a hairbrush yet) were painting, and gluing, and having a very happy, very messy time.  I snapped a few photos, and didn’t interfere.   Larkspur had really done a good job on her own, even putting a painting smock on over her clothes.  I thought of how much Elizabeth would love to see my two girls independently working, messy hair and all.  Little did anyone know that she would become very sick later that evening and end up hospitalized with pneumonia.  Elizabeth has stage four breast cancer and is very immunosuppressed.  Would you pray for her with us?

The heart boxes were just the beginning of our Valentine’s Day festivities, which is interesting, because I had made very few plans for this day.  Somehow Elizabeth gave me just the nudge I needed to celebrate.  I knew I wanted to make Jonny a jar to keep matches in after seeing Molly’s.  Last night as we watched episode six of Downton Abbey, one of the characters used the phrase “fetch me the matches” as she professed her love for her…what should I call him…her love interest?  At any rate, Jonny and I are usually very out of touch with the rest of the world when it comes to television, but since we are streaming Downton Abbey on Amazon, we feel very hip and current right now.  I was pleased to be able to use a line from the show on my Valentine.  I would like to add that I struggled with that simple little craft though.  Molly’s looks much nicer.  I should probably stick with the fiber arts.

Jonny decided that his Valentine to me would be making sugar cookies with the kids.  That worked out well, because the cookies served as Valentine’s for them as well.  We were even able to share some with one of my girls’ favorite local friends, Miss Nell.  And goodness, my dad and stepmom sent the girls and I flowers, which was a lovely surprise, and Keats grabbed the camera and to Seth’s horror snapped a couple of pictures of us fooling around at the piano bench (Seth was fussing about practicing.)  I am posting the photo because I love it and surely Seth won’t be too mad….

It was a happy Valentine’s Day.

Happy Valentine’s Day and much love to all of you.