As we did two years ago, this year we decided to spend our Thanksgiving day hiking. The first time we did this, we were at one of the hardest places in our lives thus far, and the hike was Jonny’s way of making me get out of bed and keep moving forward. It was a refusal to let grief and loss cripple our family; a way to surround me with beauty, forcing me to give thanks. This year, there wasn’t sadness, just the continuation of a new tradition.  Thanksgiving will always be a reminder to me that by the grace of God we do indeed survive the hardest of times. 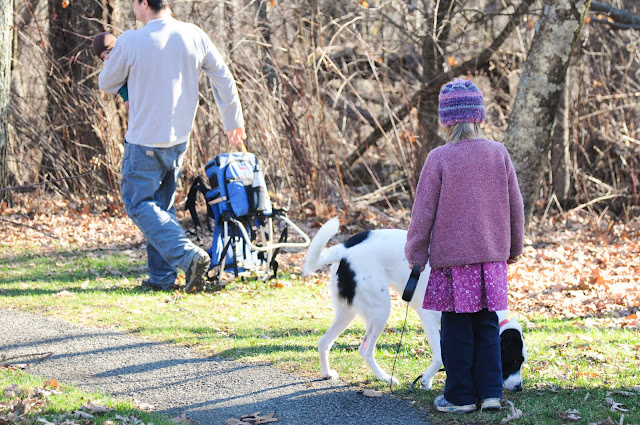 Larkspur started the hike with a good pout, because we wouldn’t let her carry a doll.  You know how that sort of thing goes:  child starts out carrying item, parent soon thereafter ends up carrying item for the rest of the hike. 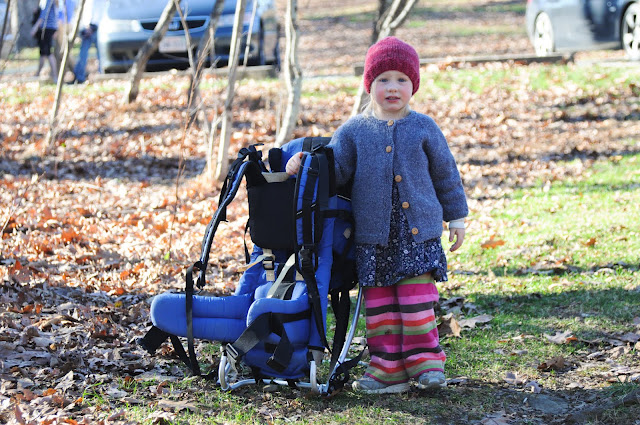 Beatrix was pleased because she loves getting to ride. 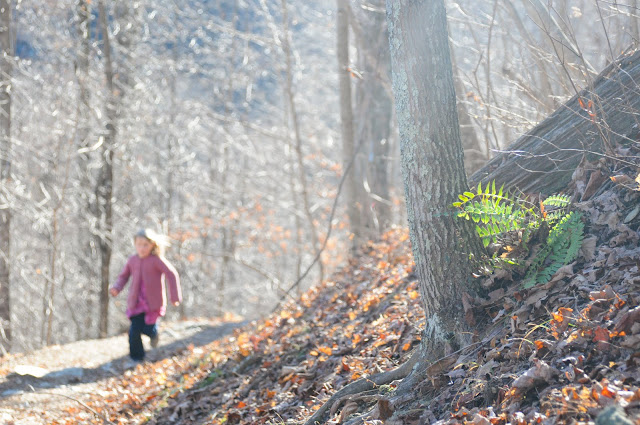 Larkspur soon perked up, realizing  that if she didn’t she was going to get left behind. 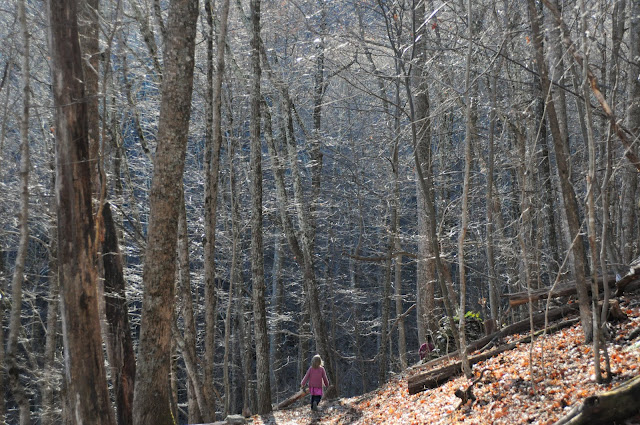 I wanted so badly to capture the light bouncing off the bare branches.  There was the illusion that all those little twigs were coated in ice, but it was simply sunlight. 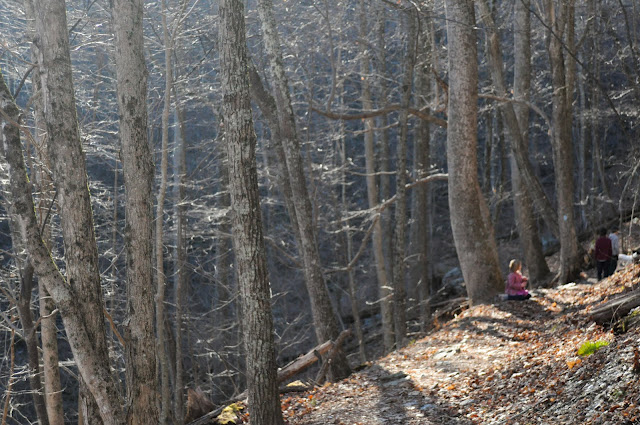 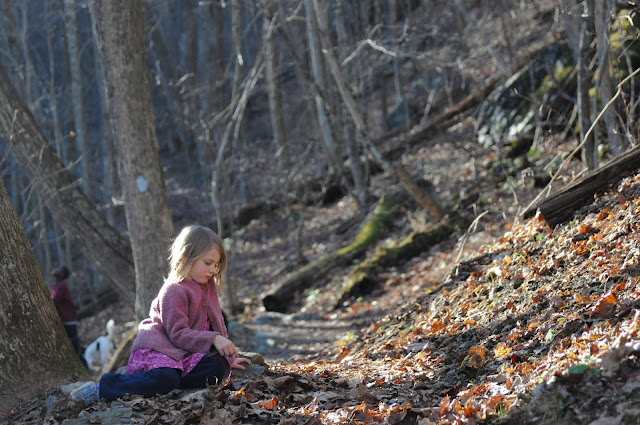 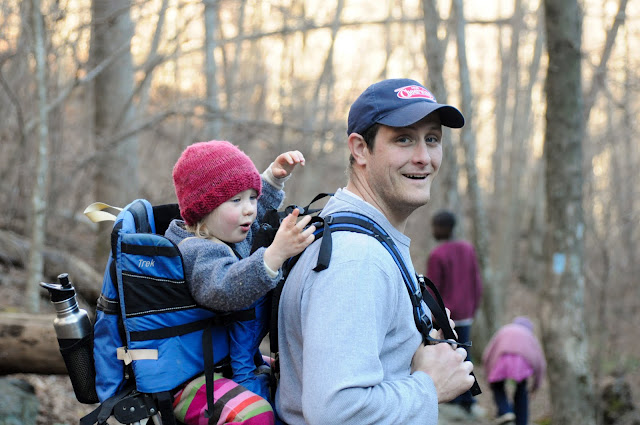 I think that Jonny is maybe teasing me at this point, because we have been walking for less than half a mile or so, and I am already hurting.  Walking downhill can actually be very difficult after awhile.  This trail was downhill the entire way to the falls (which of course translated to uphill the entire way back.  Hello, nearly 1000 ft. elevation change.)  Jonny planned this hike without mentioning to me that it is rated moderately strenuous.  I am not in good shape, and remarked to Jonny that the strongest muscle in my body is my uterus, and that doesn’t get me too far when hiking.  I confess that I got a little cranky on the uphill portion of the hike (Silas of course on my back,) but not too bad.  I was just seriously feeling like I would not be able to make it back up the mountain.  It’s kind of crazy to take these strenuous hikes with a bunch of children, two of whom require a ride! 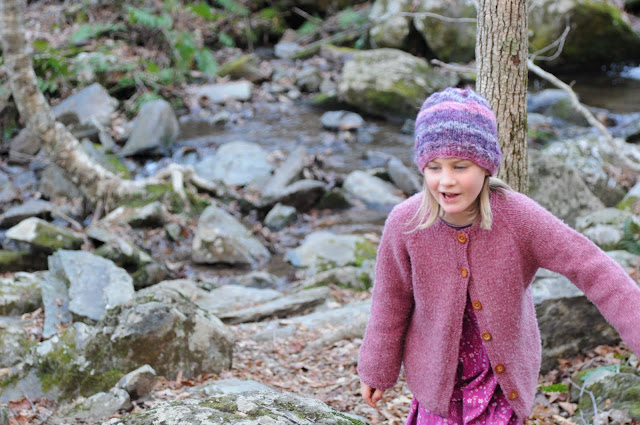 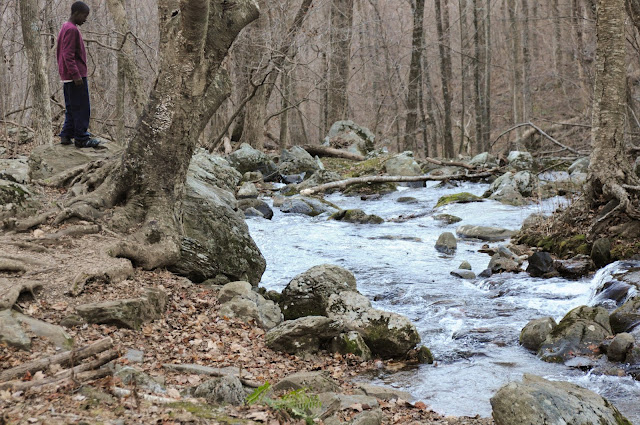 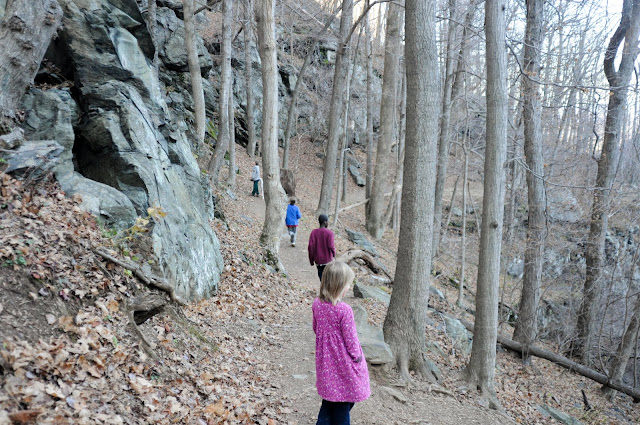 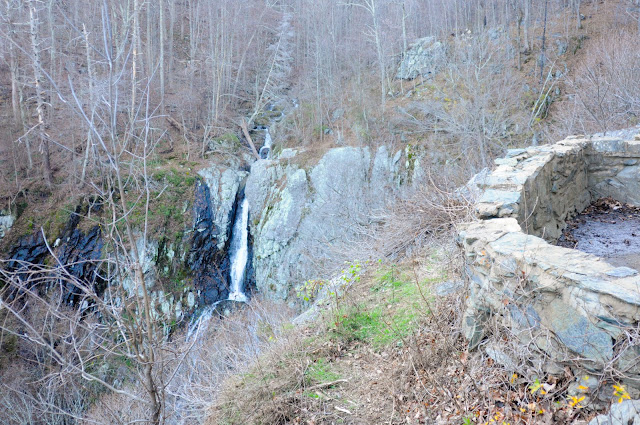 We chose not to hike the additional half mile or so down to the bottom of the falls, so I didn’t get any great pictures.  The light was getting pretty low anyway. 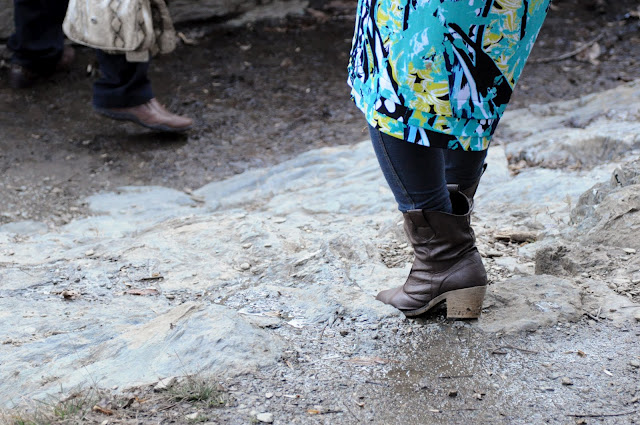 On the other hand, we watched the lady wearing these “not made for hiking” boots head on down the mountain with her partner.  That means she hiked around four miles in those shoes.  Insane, brave, tough?  I don’t know. 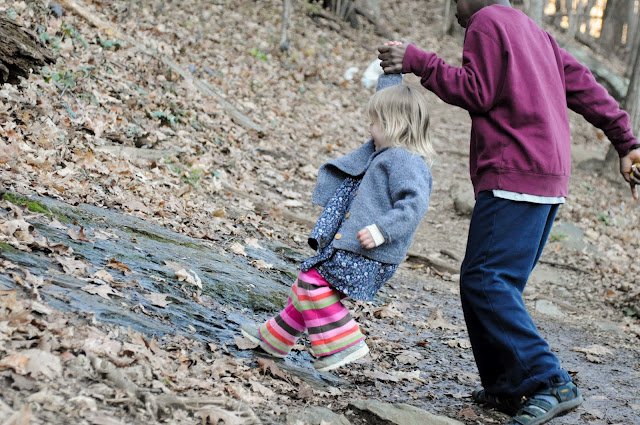 Beatrix walked for about fifty yards. 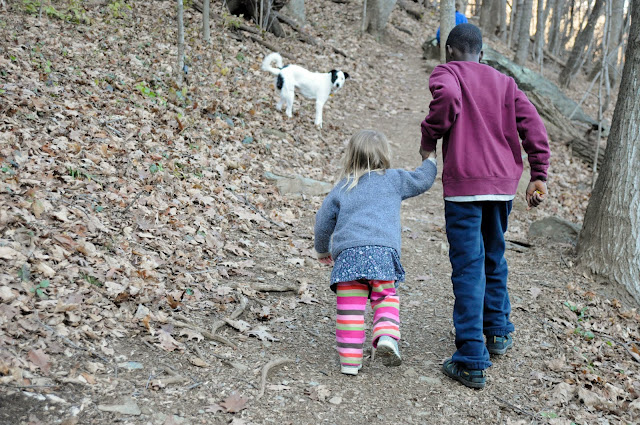 With help, of course. 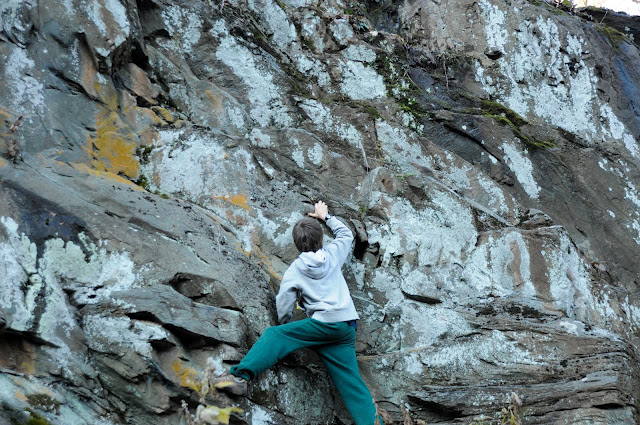 Keats decided to do a little bouldering. 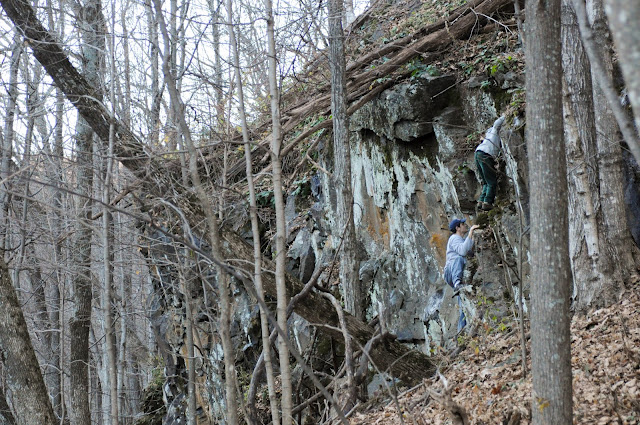 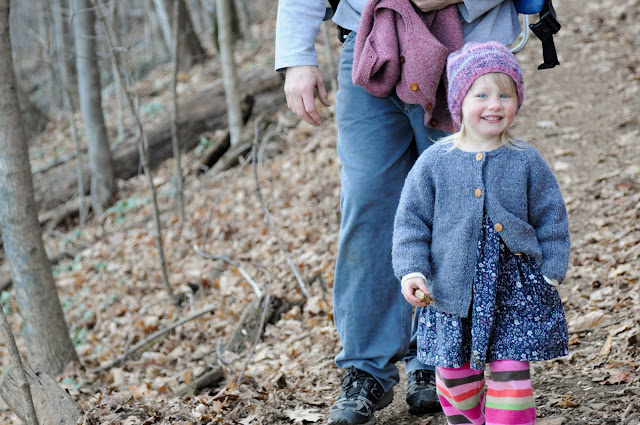 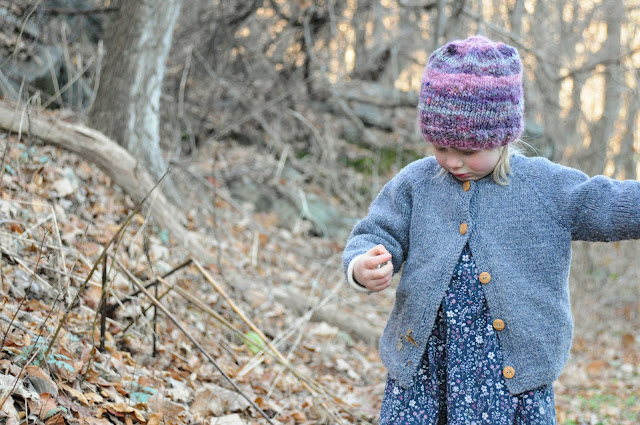 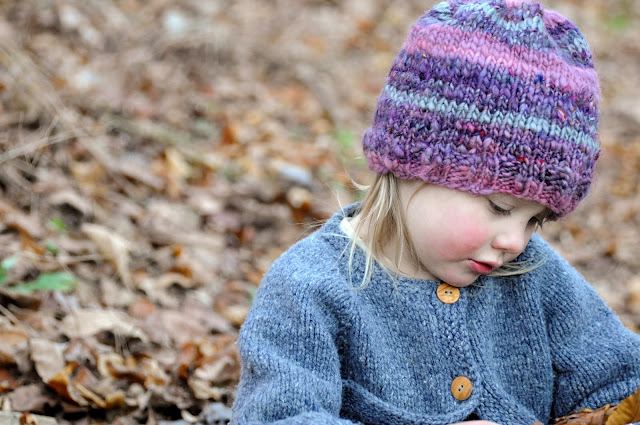 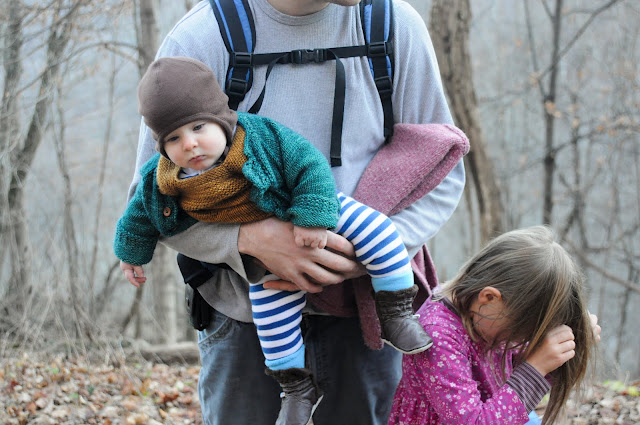 We took a little break because Silas got sick of riding on my back, and because Seth threw a handful of big burs into Larkspur’s hair.  Those were a challenge to remove.  I’m sure that Larkspur would say that sometimes it’s a challenge to live with older brothers. 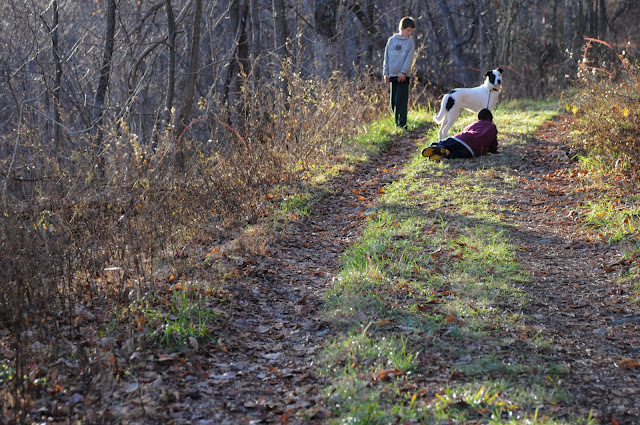 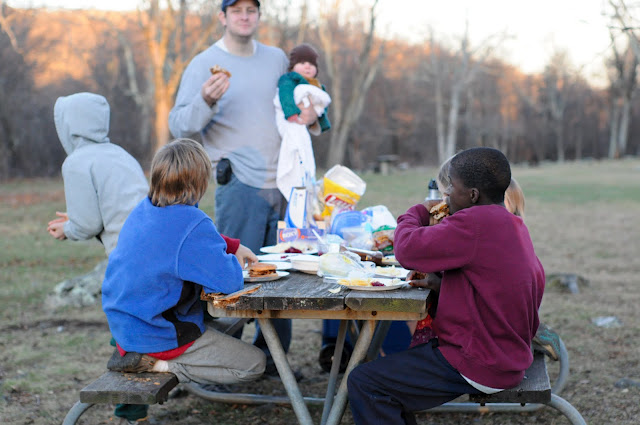 Finally back at the picnic grounds, we ate our Thanksgiving barbecue, cole slaw, and potato chips in the cold.  It was actually really, really fun. 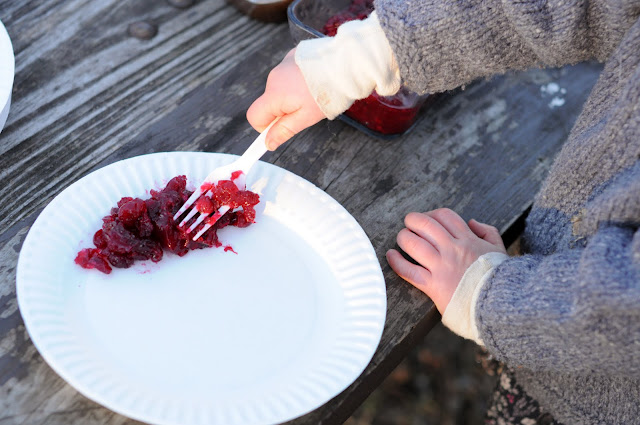 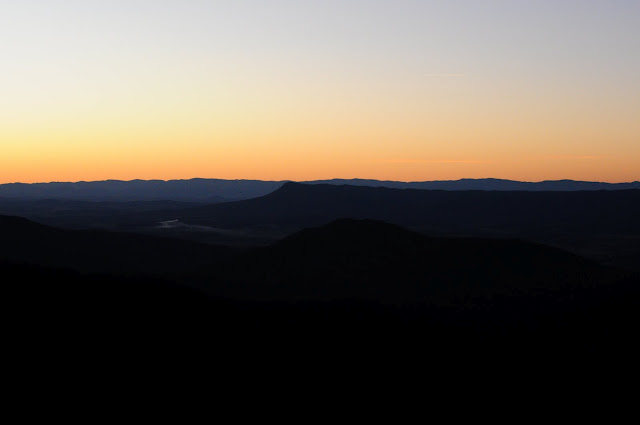 p.s.  We hiked to South River Falls in Shenandoah National Park.
Beatrix is wearing her blueberry cardigan, and Larkspur, her raspberry.  I haven’t really posted much of either of those sweaters yet.  I love the way they turned out, and they are worn almost daily.
And the hat that is supposed to belong to Larkspur, but was mostly worn by Beatrix on this day: 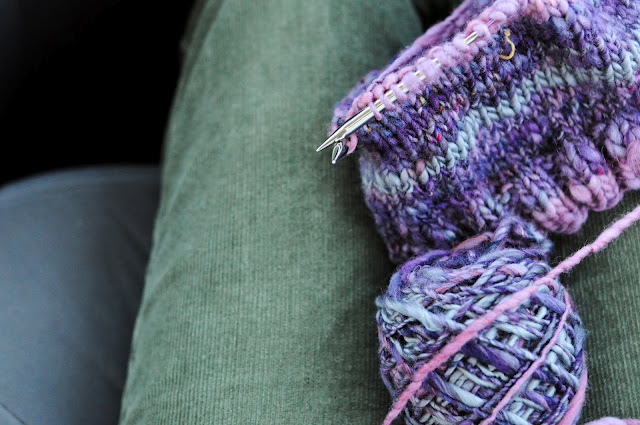 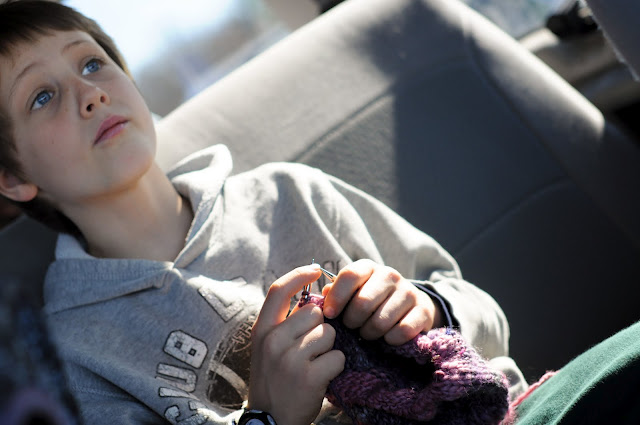 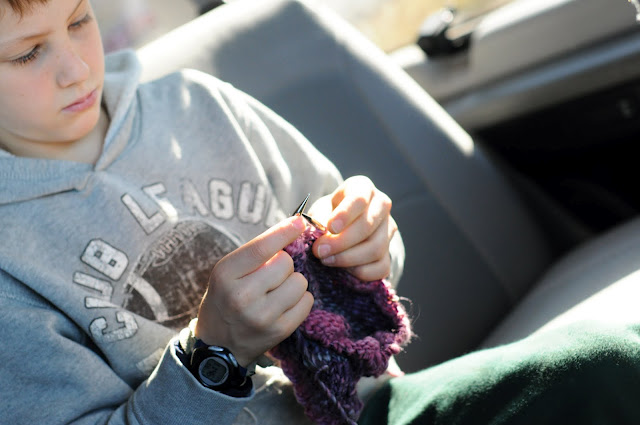 I cast on the night before Thanksgiving, and then Keats and I took turns knitting it on the way to the park.  He did all the decreasing, refusing to let me help at all.  Do you remember Shannon’s Kickstarter Project?  This hat was knit with the first skein of yarn I have received as part of my reward for donating to her new business.  It was a lot of fun to knit with! (more of her yarn here.)

I hope that those of you who celebrated Thanksgiving had a great one!
p.s.  Ravelry notes for the hat here, for Beatrix’s blue cardigan here, and Larkspur’s pink cardigan here.