So, as I mentioned, we went to the beach last week.  This trip has been planned for months, although I didn’t really believe it would happen until we were packed and in the van.  This was our first big, planned by Jonny and I “we’re really grown ups now” vacation.  We joined Jonny’s brother, his wife, and their two kids in Duck, North Carolina in a house that must have been three times or more than the size of our little farmhouse.  Now that we’re home, our house is feeling really small.  But, I’m trying not to dwell on that, but rather the fact that we were able to take our kids on a real vacation. 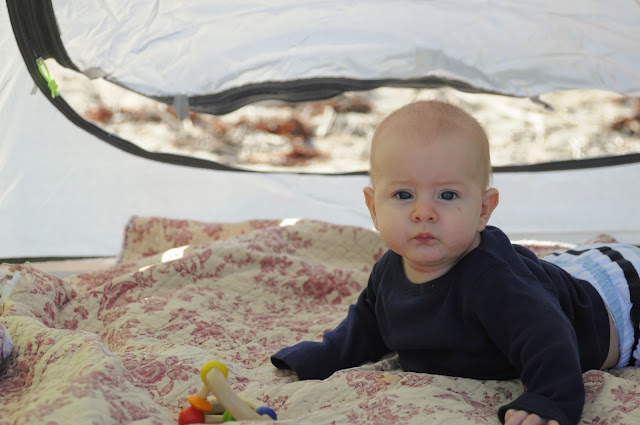 Silas had a little tent on the beach.  And about him, I say this to everyone who will listen:  he’s the cutest, sweetest baby I’ve ever met.  And yes, I know I say that about all my babies (well, the cutest part, not necessarily the sweetest.  but I won’t name names.) 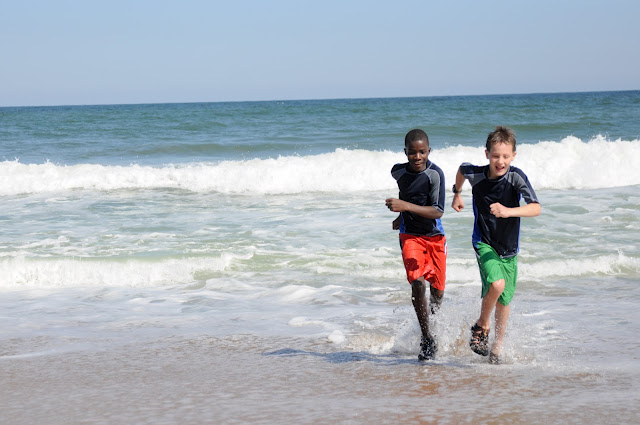 The water was pretty dang cold.  I don’t think Gabe ever submerged himself.  Most of the fun happened along the shore.  But, on our last day, feeling that I needed to prove something to myself and my boys (who sometimes need to be reminded that their mom isn’t a total wimp) I did actually get out in that water.  Boy is the Atlantic different than the Gulf (of Mexico!)  I felt like a tiny little twig being pushed and pulled by that raging ocean and I loved it.  Later, standing in the shower, I could still feel it.  I love that about the ocean.  The power of it, felt even once you’re on dry land again.  Of course, I’m still a mountain girl at heart. 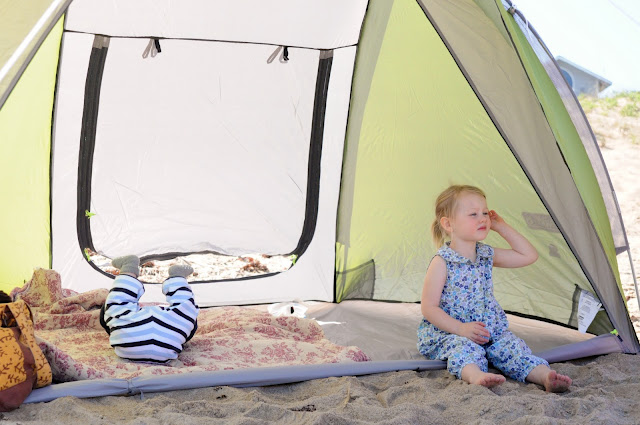 Jonny and I can still well remember the times last summer when Beatrix without warning would jump into the pool (and require rescue) but she seems to have become a bit more cautious.  I think it helped that the water was so cold. 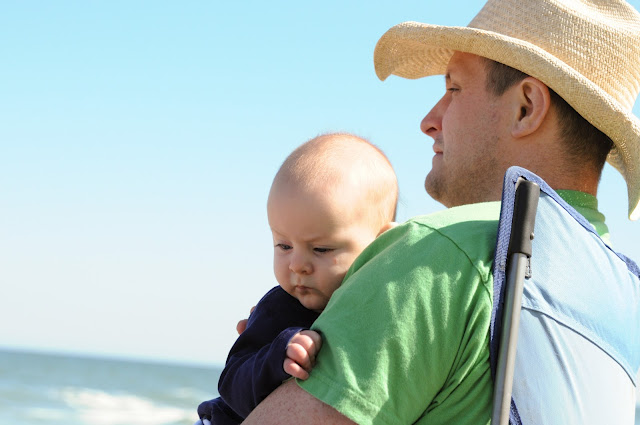 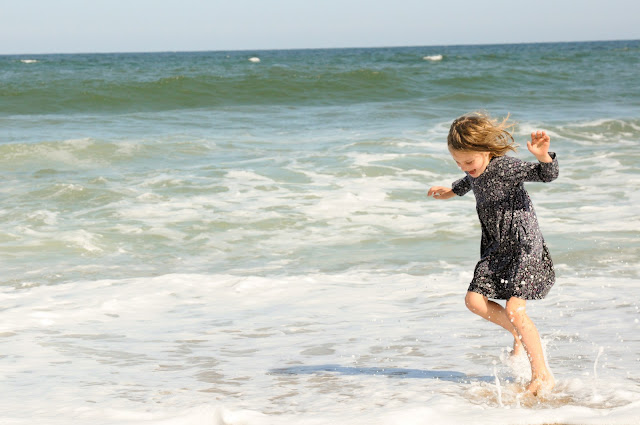 The girls would dress in regular clothes, but then end up getting soaking wet, and need to change.  There were many, many changes throughout the day.  Not unlike a typical day at home:  the kind that prompts Jonny and I to discuss putting a padlock on the girls’ armoire. 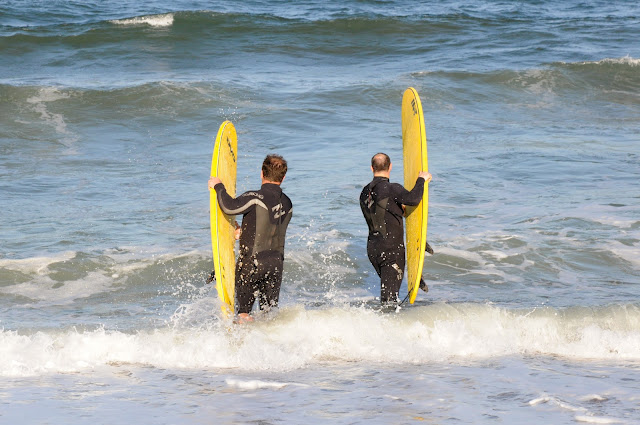 Jonny and Jared decided to give surfing a try.  They have both been at some point in their lives both skateboarders and snowboarders (Jonny would definitely say he is still both, I don’t know about Jared!) so surfing seemed the logical thing to do.  We won’t talk details. 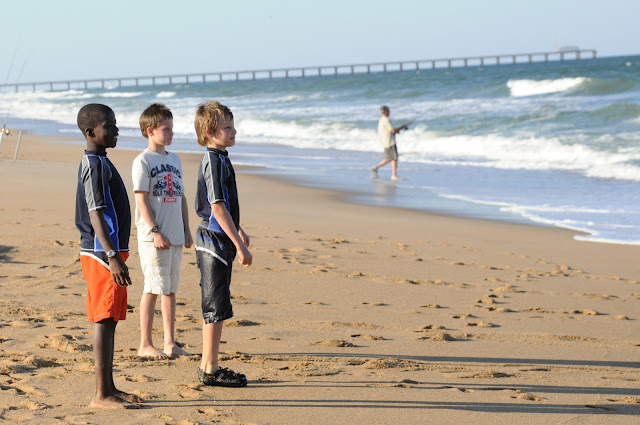 The boys eagerly watched, hoping for some good laughs.  They got a few.  Gabe specifically–oh man, I wish you could hear his, head thrown back, almost like an old woman, laugh.  It’s big.  It’s great.  It’s contagious. 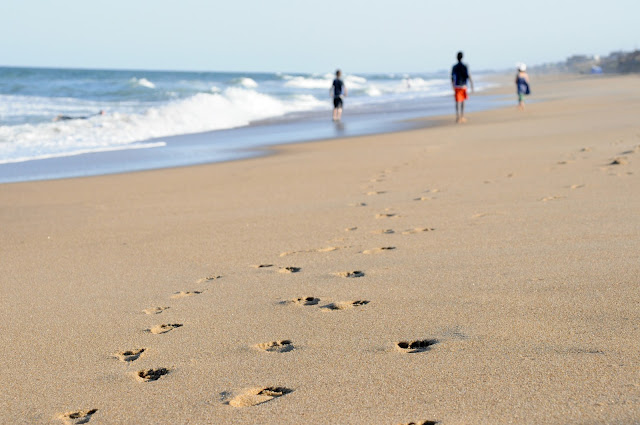 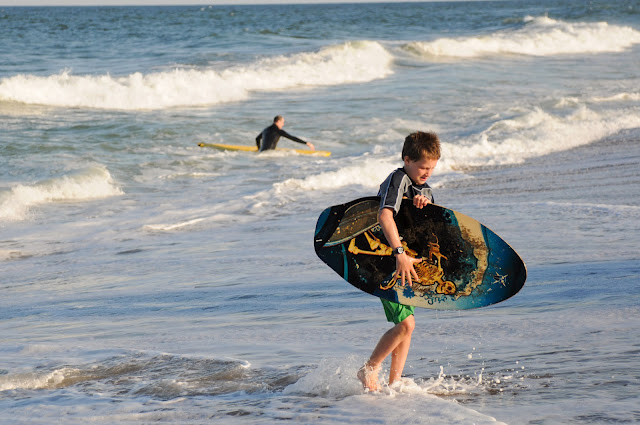 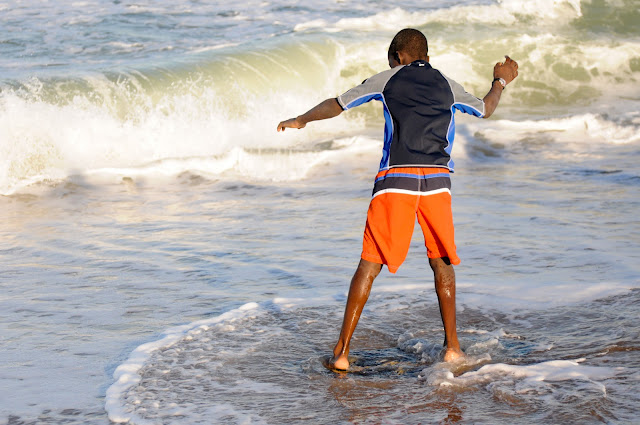 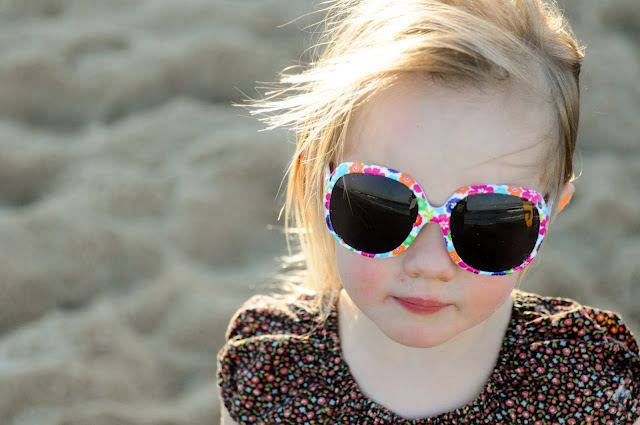 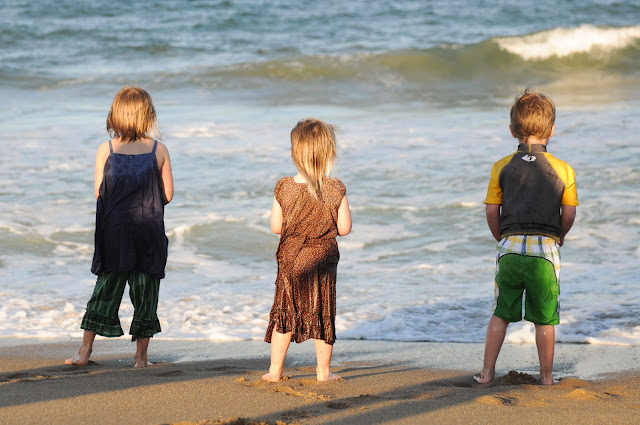 This one’s kind of funny–Jonny commented that they all three look like they are (tinkling!)  Of course the girls are girls, and our little nephew has better manners than that, so of course not. 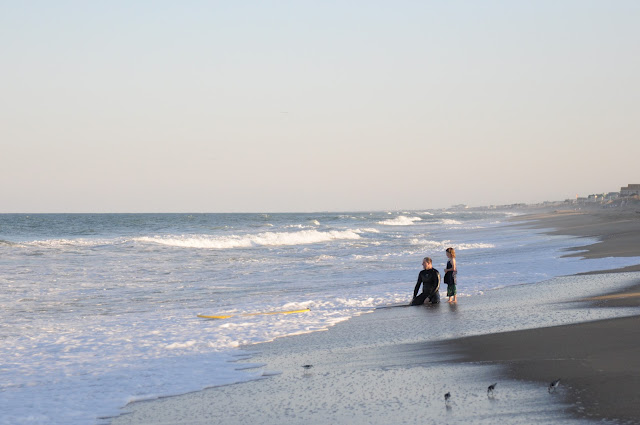 The surfing thing was really hard.  Really exhausting.  Not that I know firsthand. 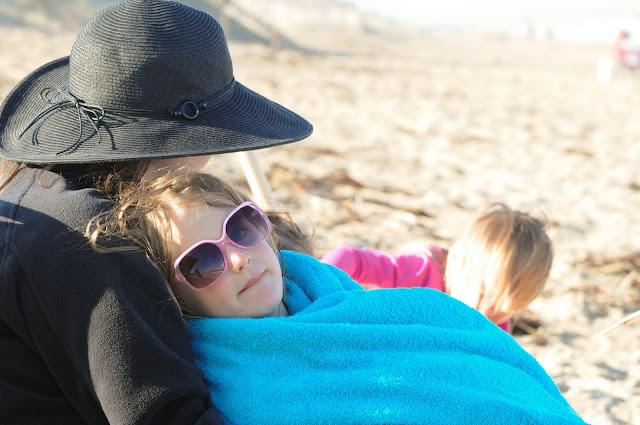 My girls both loved their Aunt Andrea, a lot. 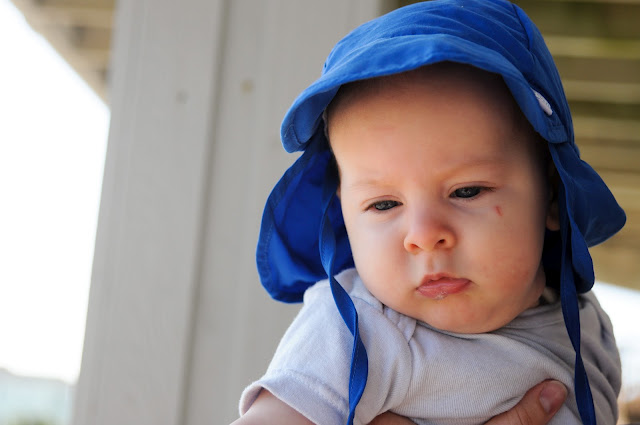 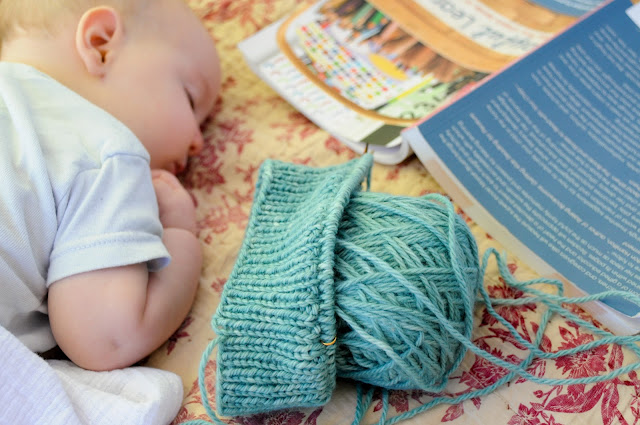 A little beachside Yarn Along action.  It didn’t last for long, but I tried! 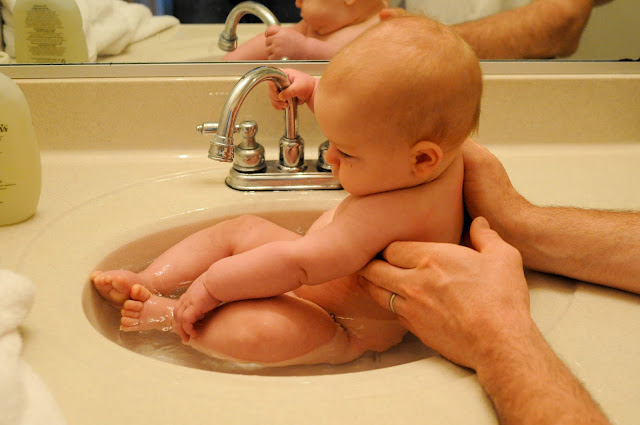 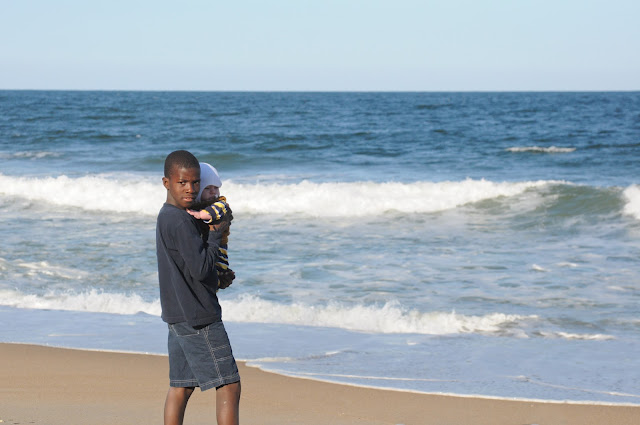 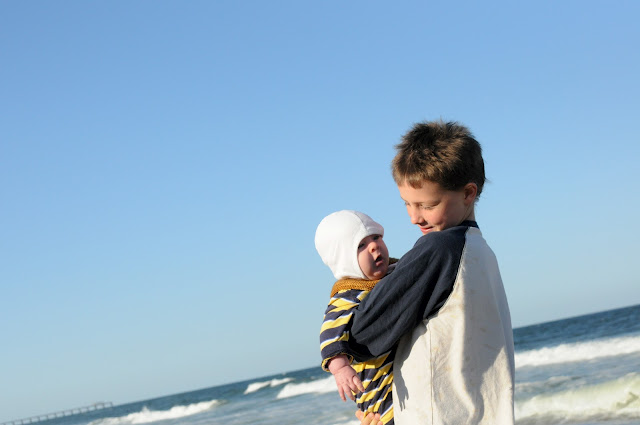 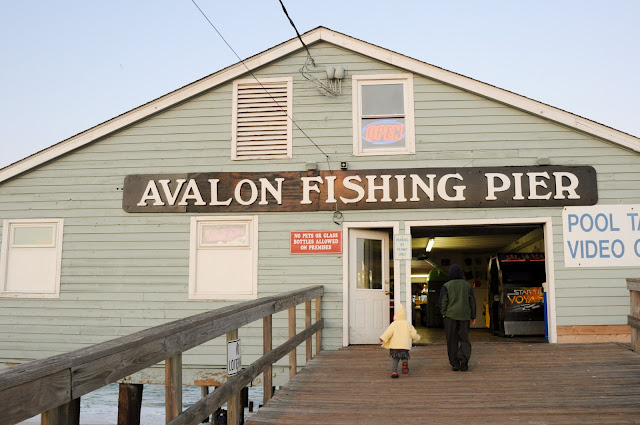 One evening we went to a fishing pier.  The pier itself terrified me.  It was way up high, and there were big cracks between the planks and you could see the raging ocean under your feet.  I think I could have handled it alone, but add little children running around and I thought it was awful.. 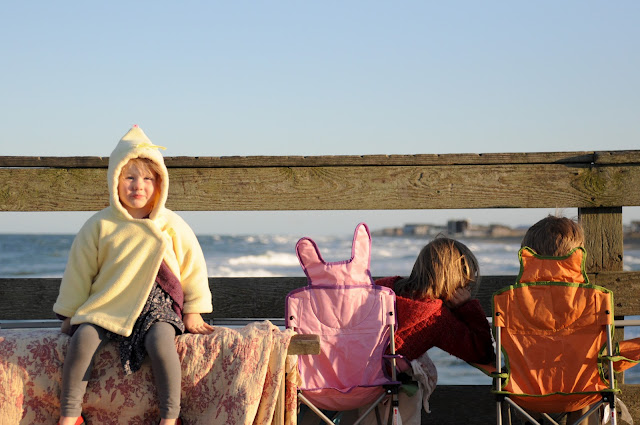 I was terrified that Beatrix would fall through through the rails.  The wind would gust and shake the whole thing.  No one else seemed particularly affected, but I could have burst into tears at any given moment.  It was not. my. thing.
Oh, and something kind of cool, but a little embarrassing happened at the pier!  A lady came up to me and asked if I write a blog (Hi Allyson!)  How crazy is that?  The funny thing is that when people recognize me, it’s actually not me they recognize, but my girls’ sweaters!  I was really glad she came to talk to me, but was a little nervous for some reason and felt like I had a booger hanging out of my nose the whole time we talked. 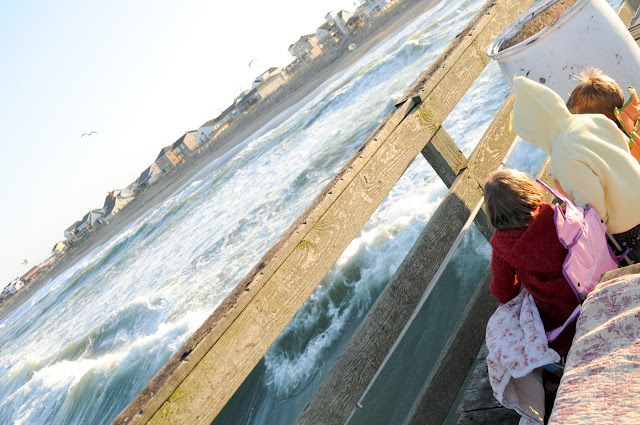 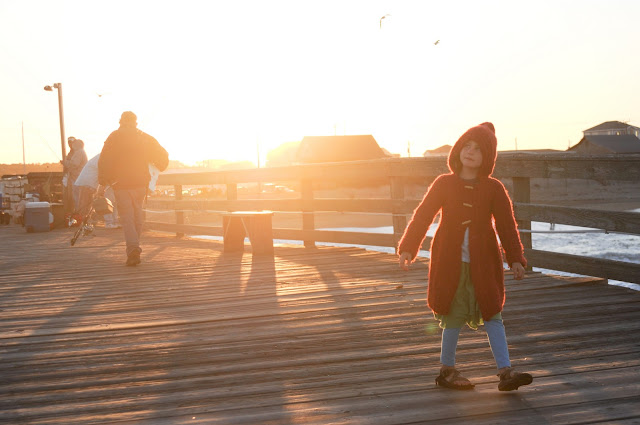 It really wasn’t that cold, but it was windy! 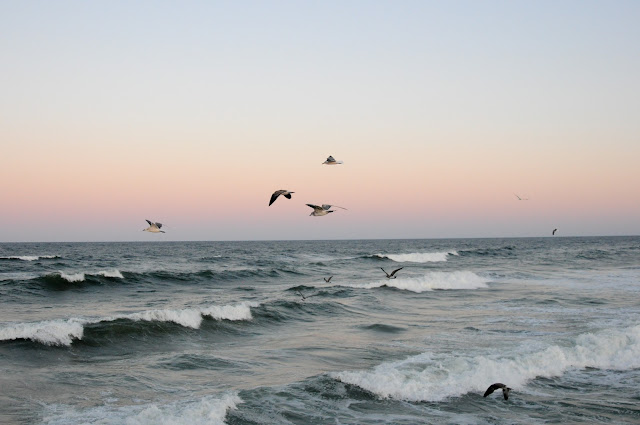 Old fisherman looked at me like I was a little crazy as I snapped photo after photo of the seagulls.  Here at home the only place we have seagulls is in parking lots.  They are much prettier flying over the ocean. 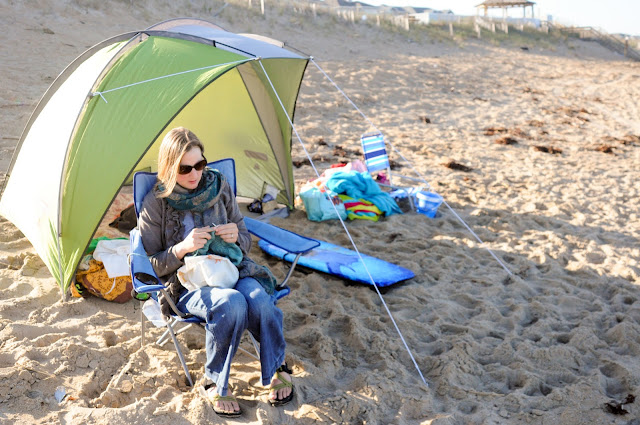 One afternoon, Jonny and I joked that I was super fabulous in my five dollar sunglasses, ruffled cardigan, and scarf, so he took some photos.  I am rarely fabulous, and even on this day, I realized later that my cardigan was on inside out.  In most of the photos the wind is really blowing my hair back and you can see that I am suffering from some major postpartum hair loss.  So depressing.  I am experimenting with new parts to try and hide the bare patches!  So much for fabulous on so many levels. 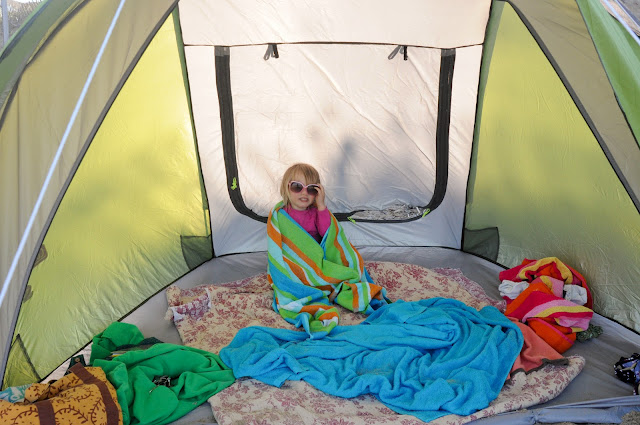 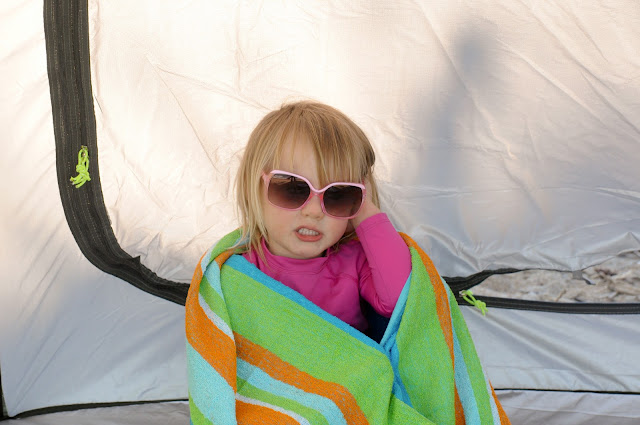 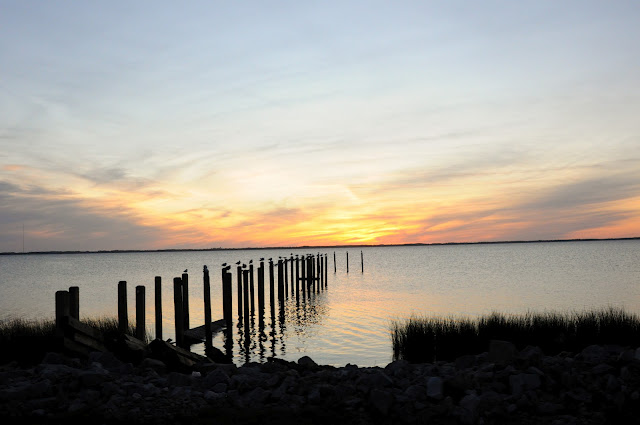 Things I’ll remember:
Watching Jonny and his older brother Jared wrestle and play and try to surf together.  They are such good friends, and it is encouraging to see the adult version of brothers getting along and really loving each other.
One evening our whole crew walked into what turned out to be a very small and crowded barbecue joint, so we opted for takeout.  There was one older woman eating with a couple of others who seemed a bit intolerant of children.  My adorable nephew stood looking at her for a long moment and she looked back at him as if he were an insect.  Everyone was a little upset with this lady, especially when she seemed to laugh when my two year old niece fell down.  But then, she came over to me and asked who the knitter was (Silas was wearing a knitted vest.)  I told her that I was, and she said that every child should have something handmade.  So she couldn’t be all that bad I decided.  A few minutes later, she was overheard saying that she wouldn’t eat in a restaurant with a family as large as ours.  But then, as she and her friends finished up and left, I asked her if she knits.  She said that she does, and I said something silly like, “knitting is necessary.”  She replied, “Oh yes, and books!” as she walked away.  I of course thought of our Yarn Along and the way that you can almost always find some way to connect with another person and I felt really happy.
I weaned Beatrix.  Again.  I’ve been dong this tandem nursing thing for over four months now, and I was just done. I decided that it was okay to respect my own wishes and what my body was telling me to do, and since (as I explained to Bea) you don’t have to nurse at the beach, this trip was the perfect time to stop.  Bedtime is a little rough now that we’re home, but we’ll get through it.