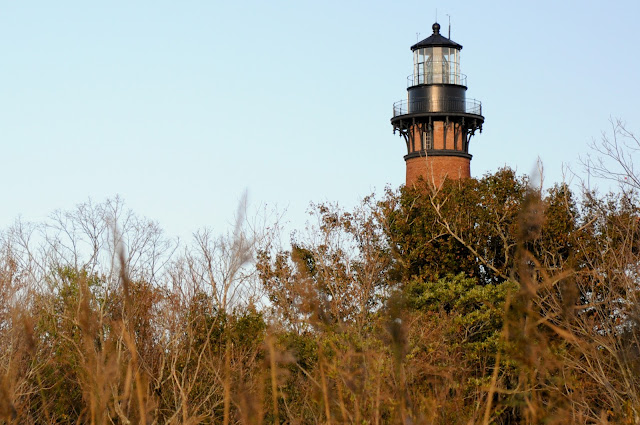 The last day of our trip, we decided that we needed to visit a lighthouse, and as they were all closing in about an hour, we chose the one that was closest:  Currituck Beach Lighthouse.  My brother in law closed his computer and said that we had to leave immediately if we were going to make it.  The thing is, I don’t ever leave immediately.  I need an hour and a half notice to get out the door, and then once I’m in the car I have to run back in the house several times for everything I forgot.  But somehow, we managed it and we made it just in time. 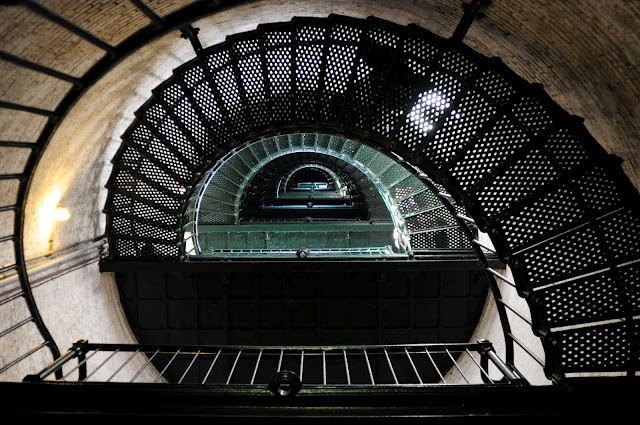 We were only given about twenty minutes in the lighthouse because we were so late.  We hurried in, I looked up, and realized that we had just paid good money to do something that combined three of my biggest fears. 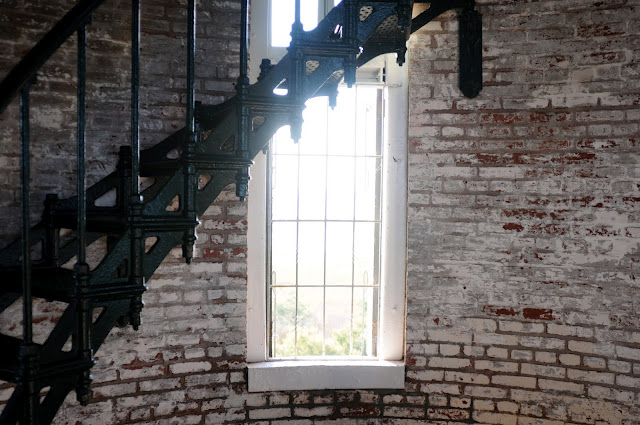 Let’s see…  there’s the whole heights thing, then there’s the double whammy of being up high with my children (meaning they are up high which I really hate,) and then possibly the worst of all:  stairs with gaps  between them.  I have been afraid of that sort of stairs since I was about three years old and my dad and stepmom lived in a little apartment with gaps between the stairs.  There’s just something dangerous about them (in my mind,) and I have this irrational fear that I (or worse one of my kids!) will somehow slip between those gaps.  Most of our crew raced up the horribly dangerous stairs without a second thought (well Jonny gripped Beatrix’s hand and carried Silas all the way up.)  My sister in law Andrea, Seth, and I were a little slower. 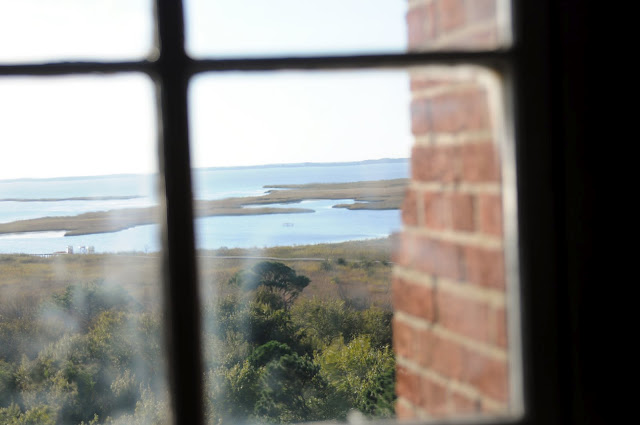 In order to make it up, I had to only look straight ahead, never up or down while on the stairs.  I definitely didn’t look at the stairs themselves, and was sure to tightly grip the rails while chanting out loud, “This isn’t dangerous at all.  I am not up high.  I am not going to fall.  My kids are okay. etc. etc.”  Seth was just ahead of me and every now and then he would cry out, “I can’t go on!! I’m on the verge of a heart attack!”   Evidently he inherited some of my fears.  Andrea and I giggled at the drama of it all, and at the fact that our legs were on fire from the climb. 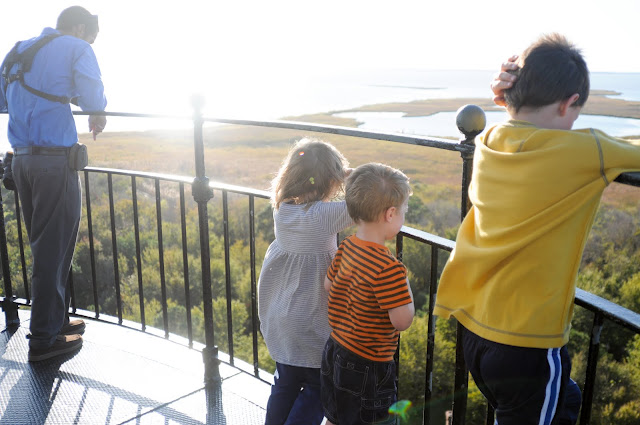 We reached the top and I stepped out, quickly snapped a photo of some of the kids (and some random dude) looking out fearlessly, and then flattened myself against the lighthouse and inched around the other side to find Jonny.  When Keats and Gabe started laughing at me and threatening to grab me and pull me toward the rail I quickly made my way back into the doorway. 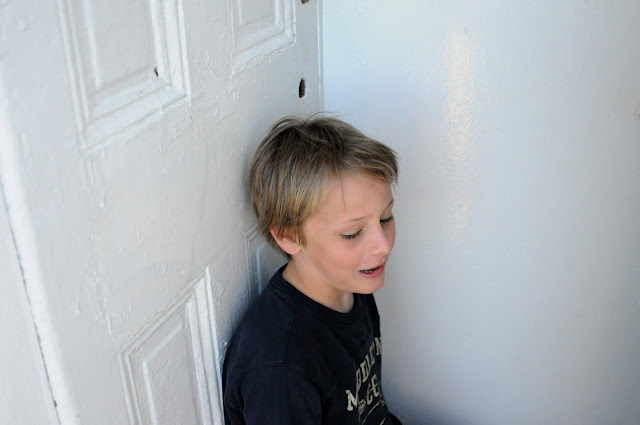 Seth was still there, crouched on the floor, afraid to move. 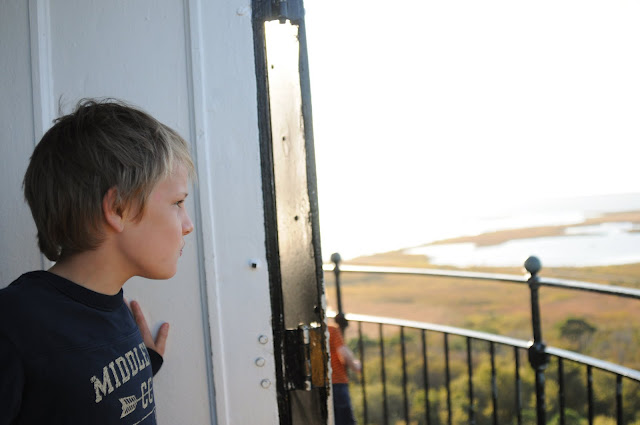 Eventually Jonny convinced Seth to creep out and peek up at the lighthouse’s fresnel lens above us, but then he dove back into the doorway.  I missed out on looking at the lens, because one thing I absolutely cannot and will not do is look up while standing 150 feet off the ground.  I would have without a doubt lost my balance and tumbled over that rail. 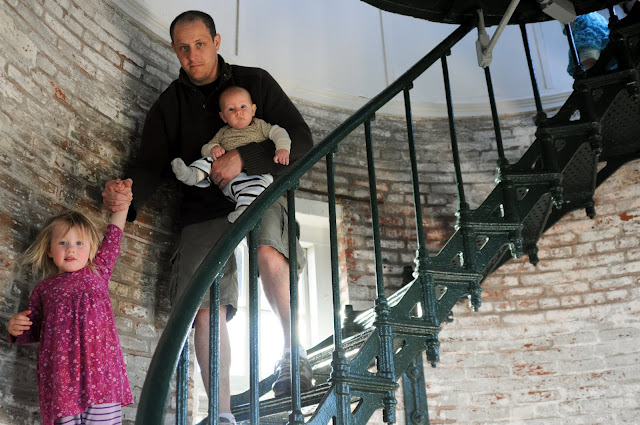 Seth and I led the pack on the way back down, and after snapping this photo of Jonny who has nerves of steel, I shut the fact out of my mind that he was carrying my baby and holding my little dare devil’s hand while descending.  I trust him.  I just can’t watch. 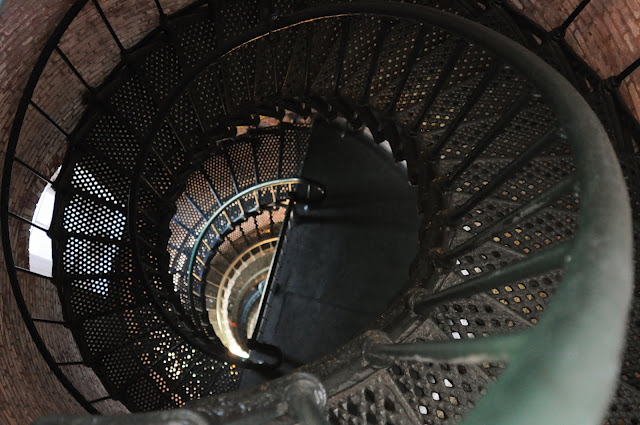 Taking this photo was an act of courage on my part.  For some reason looking up is the worst for me, but looking down from a great height is a close second. 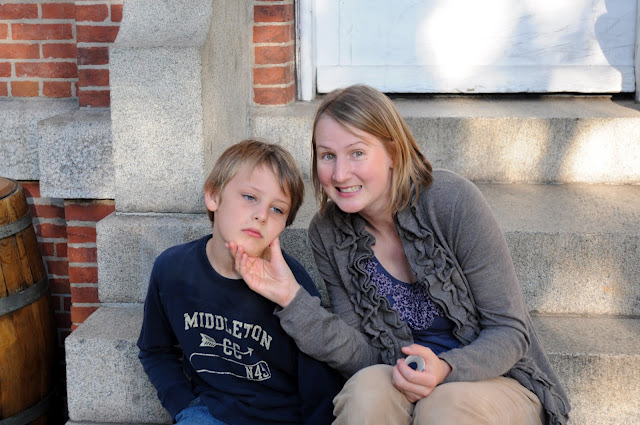 Once safely on the ground, I felt like the occasion warranted a photo of the two of us who survived scaring ourselves nearly to death.  Seth was clearly not enthused.  (please notice that my fabulous sweater is right side out.) 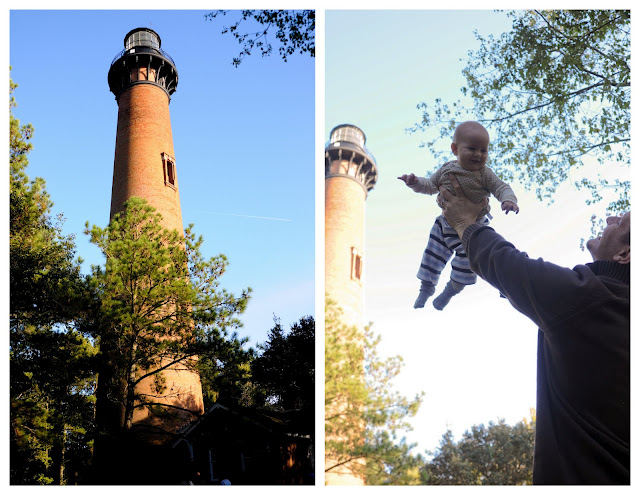 This is a good example of my favorite kind of photo sabotage. 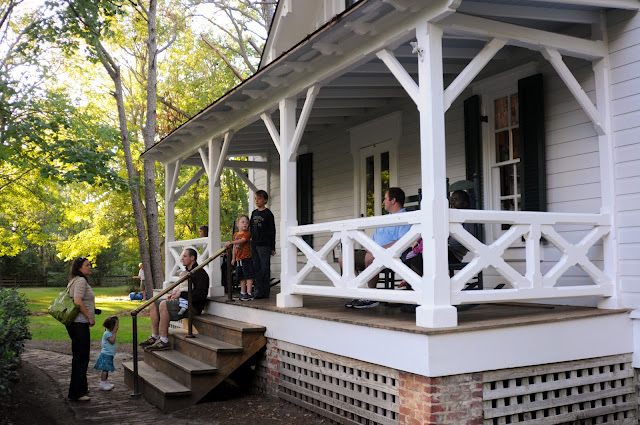 The gift shop was closed.  I really wanted a postcard.  Maybe next time. 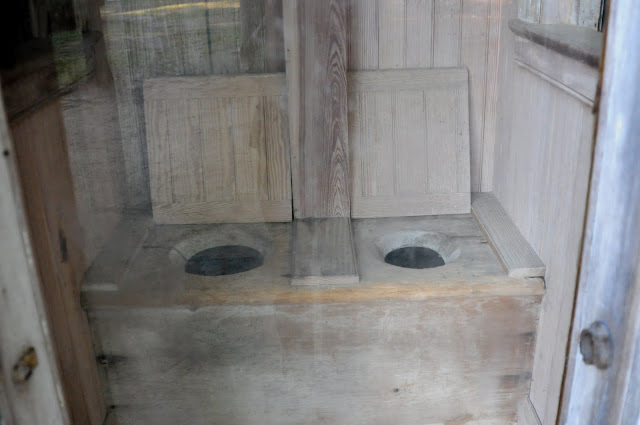 This photo was taken through a sheet of dirty plexiglass, but I just had to show you the double potty. 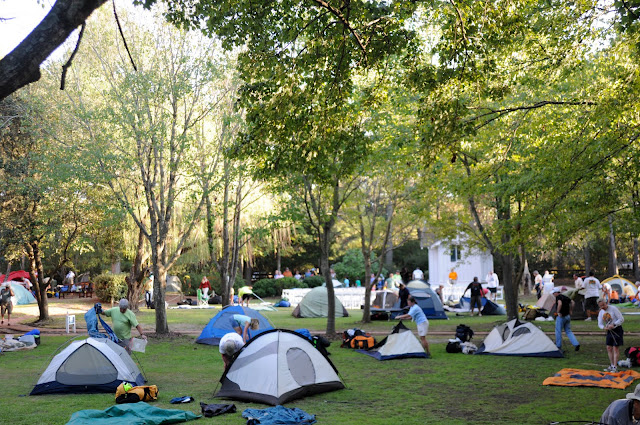 As we exited the lighthouse, the grounds around us became almost instantly flooded with bikers (or is it bicyclers?) setting up tents.  There was a race going on…can’t remember details…but seeing all those tents going up at the same time was pretty neat. 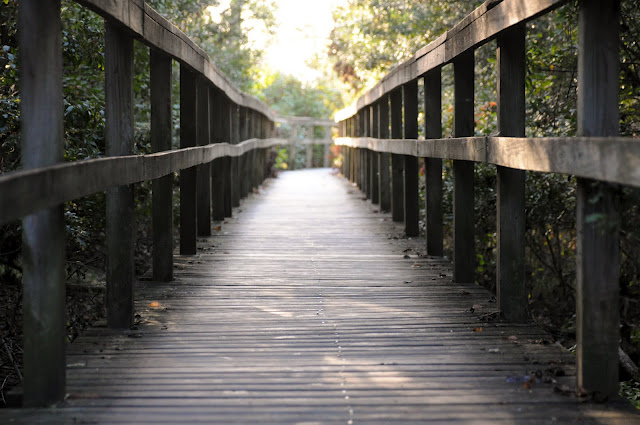 We headed on foot to explore the grounds behind the lighthouse. 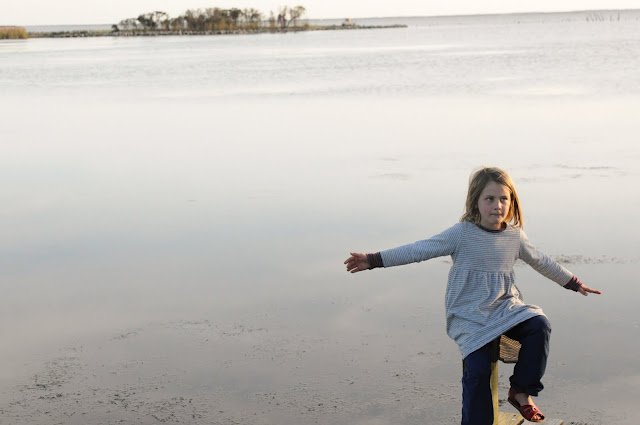 Larkspur engaged in a little of her own risk taking behaviour, but I wasn’t worried because that water was only about a foot deep. 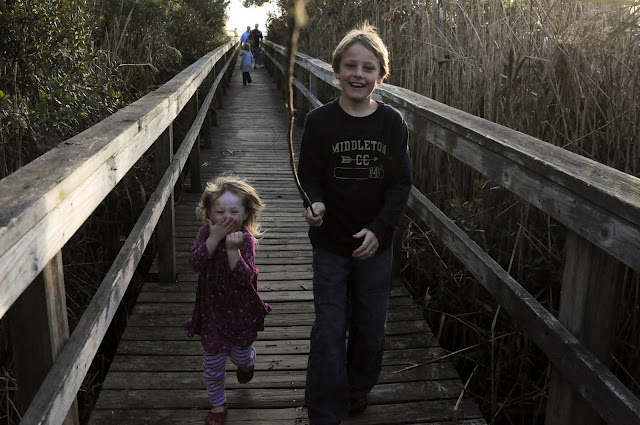 As we headed back to the car, Seth started chasing me with a big piece of grass.  I turned suddenly to snap his picture (I almost always have to sneak to get a picture of him) and while my camera wasn’t set up for the shot, hence the darkness, I captured that look on Beatrix’s face.  She was loving Seth’s naughty, torture mommy with itchy grass, antics. 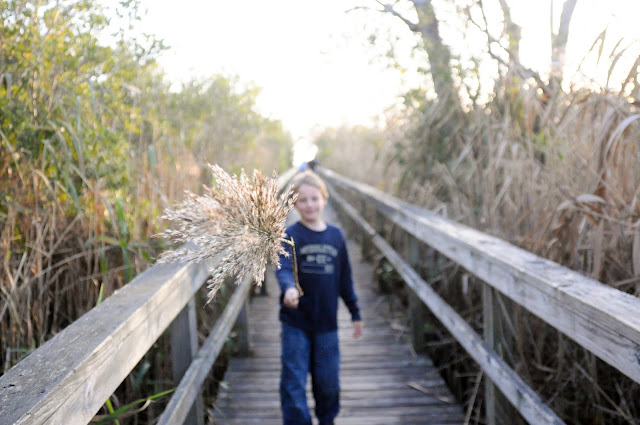 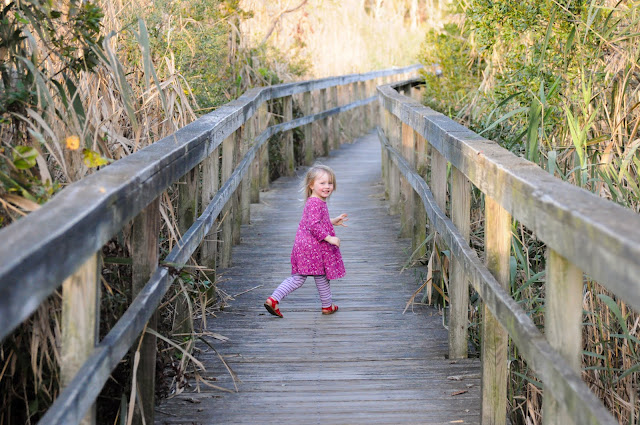 Looking through these photos, and remembering the great time we had, I am wondering what I was so afraid of.