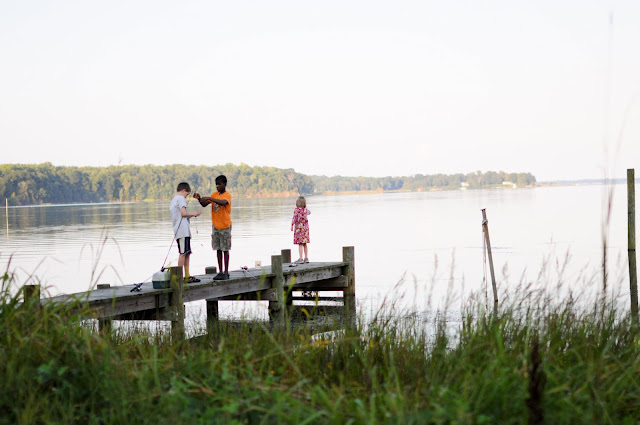 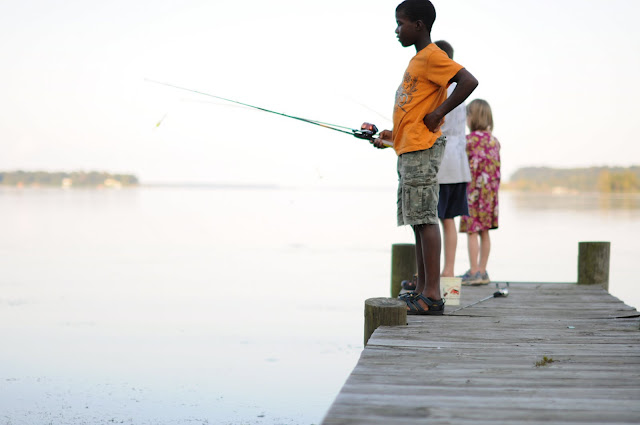 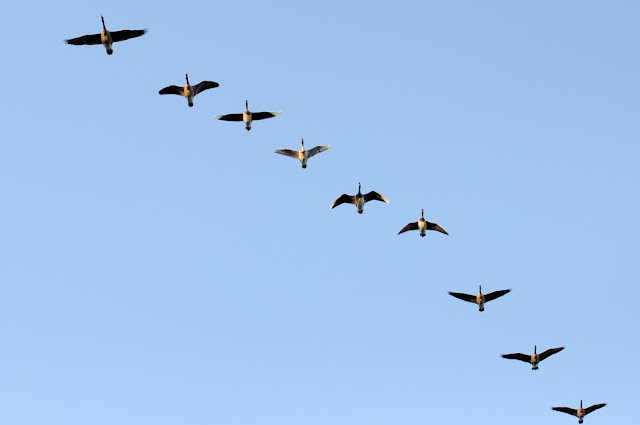 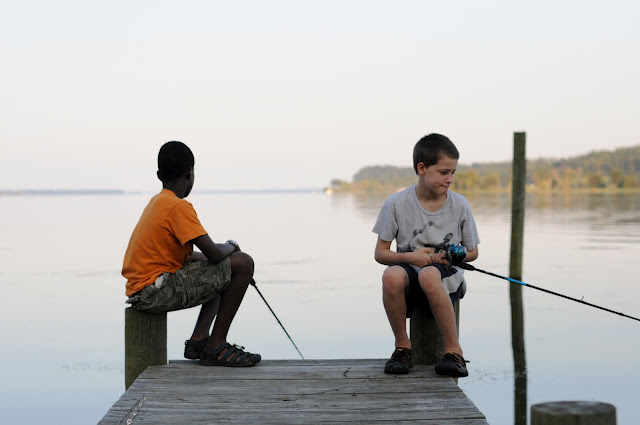 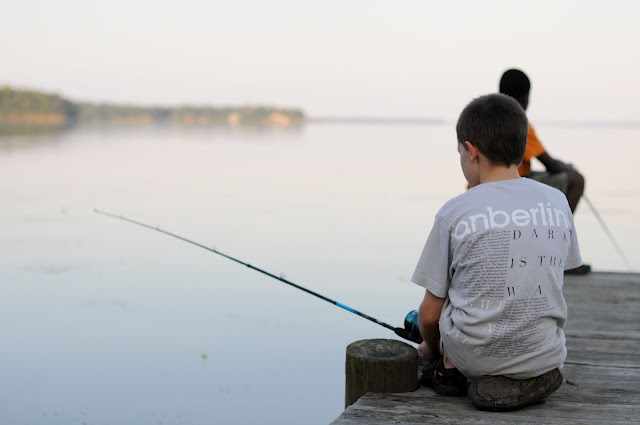 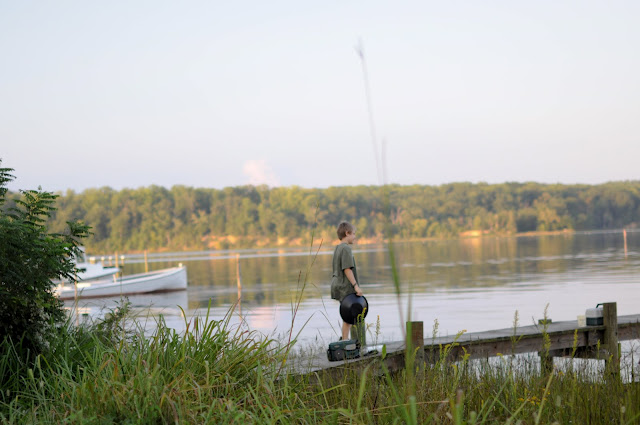 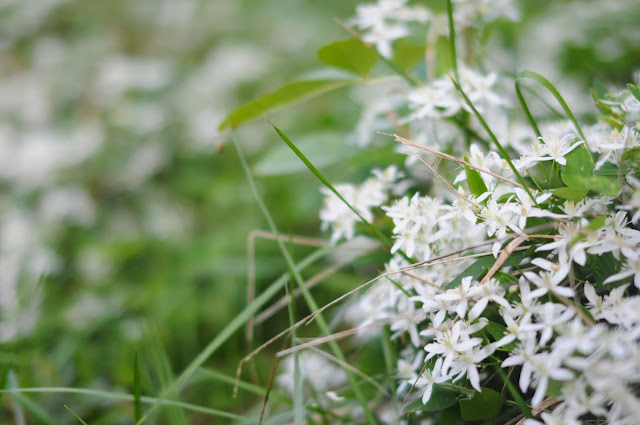 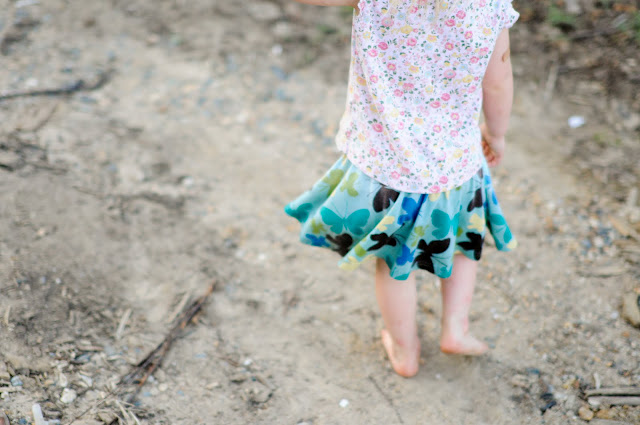 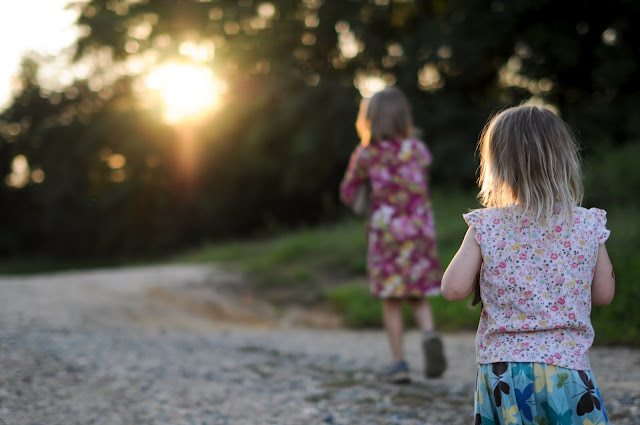 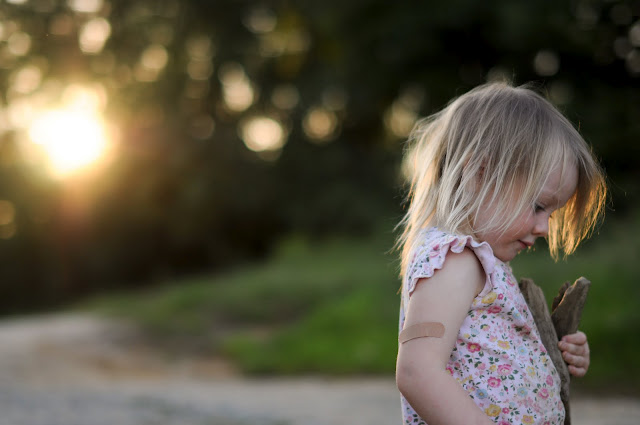 This evening around quarter past five I realized that in addition to having just promised my kids that I would take them to the end of the road for some fishing before coming home to prepare dinner, that I was due to return to my monthly spot as a knitting instructor at a local women’s shelter.  I’ve been waiting to return until I could leave Silas home for the hour and a half or so that I am gone.
Jonny took the kids down the road to fish while I hurried through the dirty dishes and the cooking so that I would have at least a few minutes at the edge of the water with them.
When I arrived at knitting class, I was met with a room full of mostly new faces along with a couple of familiar ones.  As usual there were those who smiled, those who scowled, and one poor girl who didn’t seem really to be present at all.  The wonderful woman who took the teaching lead during my absence shot me a grateful smile.  I was happy to return as her helper, rather than the other way around.  One mom jumped from her seat to give me a hug as I entered the room.  I hugged her back good and tight, and thought of what a hugger I’ve become, having most of my life stiffened during this act that used to be so uncomfortable for me.  This particular mama left the program months even before Silas was born.  A young mom with three children, only two in her custody, one a newborn.  But she’s back.  She’s pregnant again, pursuing adoption for her unborn child this time around.  My heart aches for her.
During the brief class, I held children and babies while teaching women to chant,
“In, around, through, off.”
As the class neared it’s end, I reluctantly agreed to drive a few women and children to one of the other shelter houses.  I was anxious to get home and relieve Jonny.  Driving down city streets I chatted with a woman who during the class had balked at the idea of knitting.  She crochets and has no interest in learning to hold two needles.  I listened as she talked:  She learned to crochet in juvenile prison when she was thirteen.  She’s had five baby girls, “well actually six, but I gave one to a couple who couldn’t have a baby.”  She’s six months pregnant.  And I wonder what the rest of her story is, at the same time not wanting to know.
I drive home grateful for the tremendous gift that is my life:  reminded to pray, reminded to hope, and reminded to help, even if all I can do right now is this one very small thing.