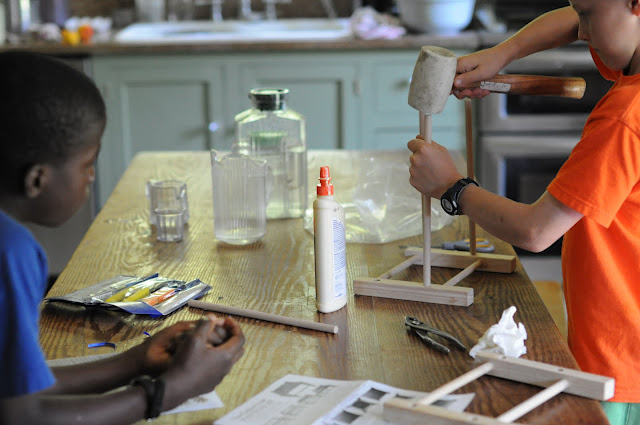 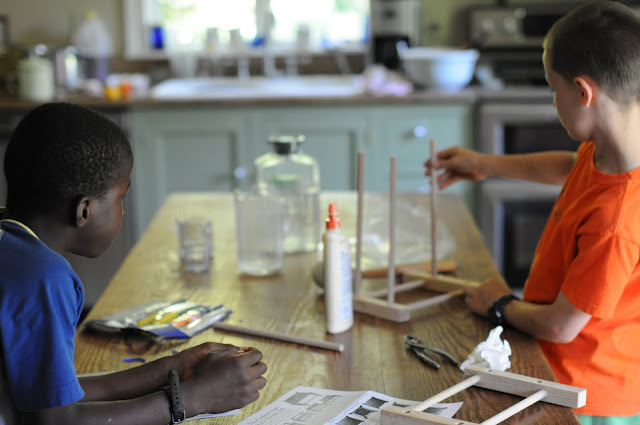 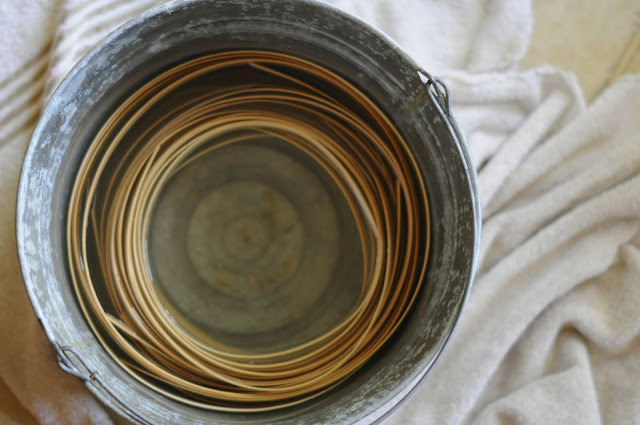 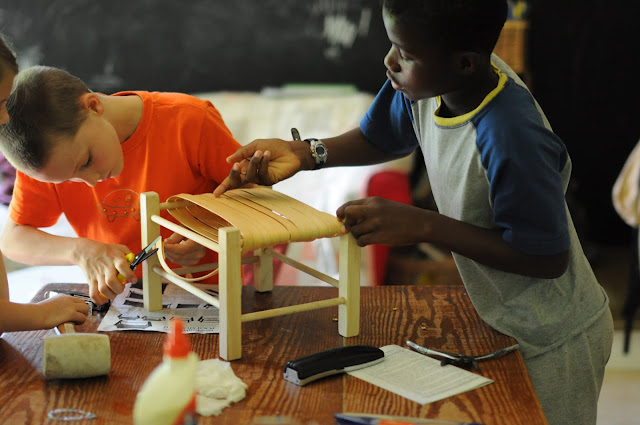 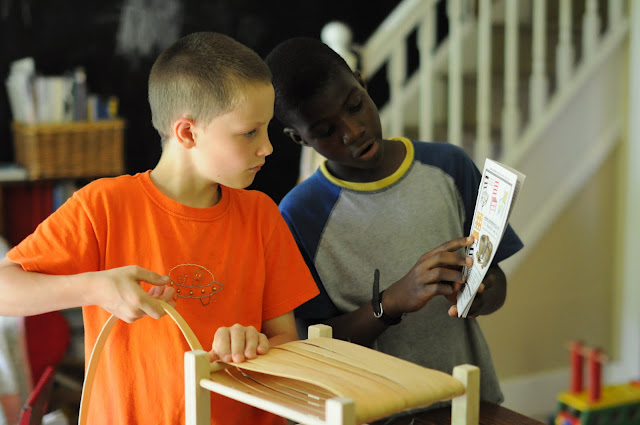 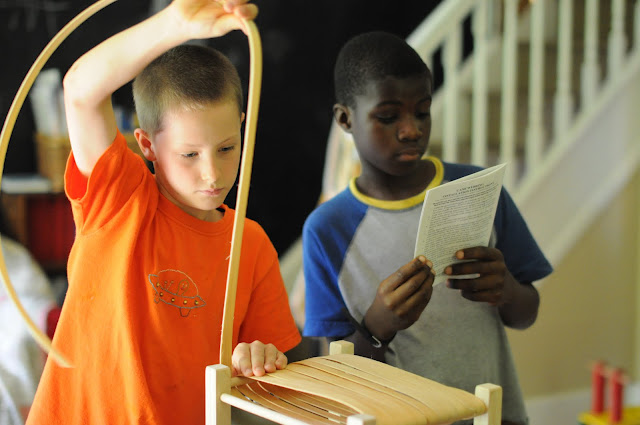 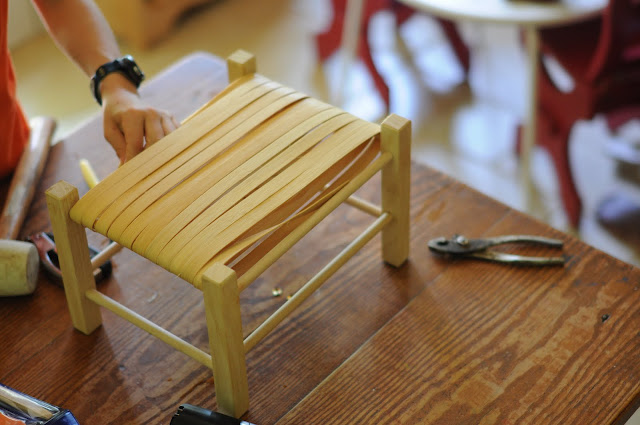 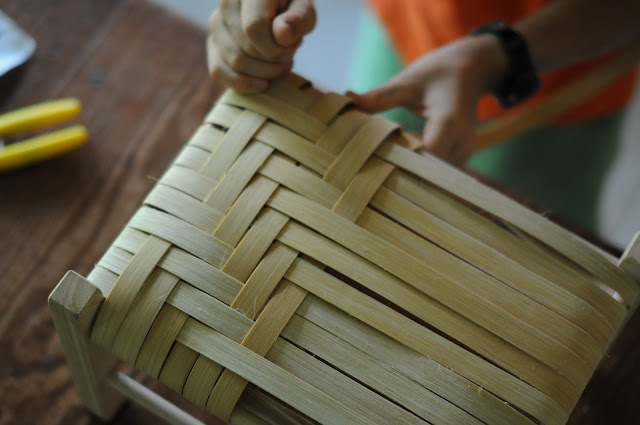 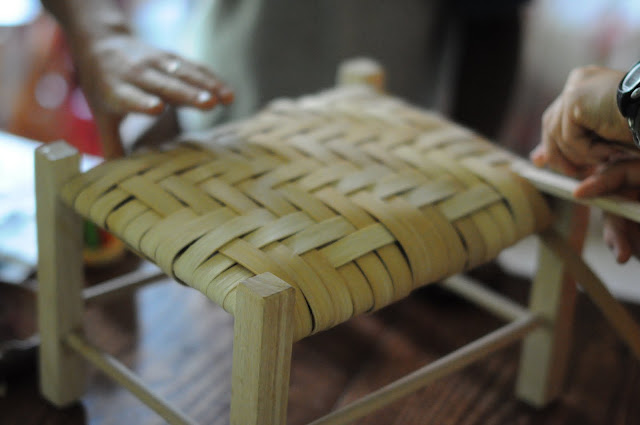 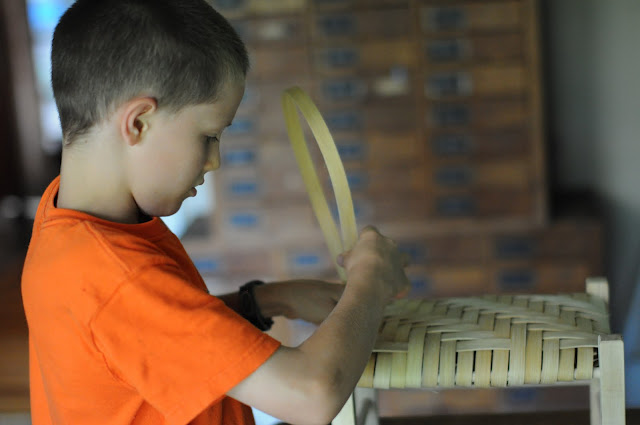 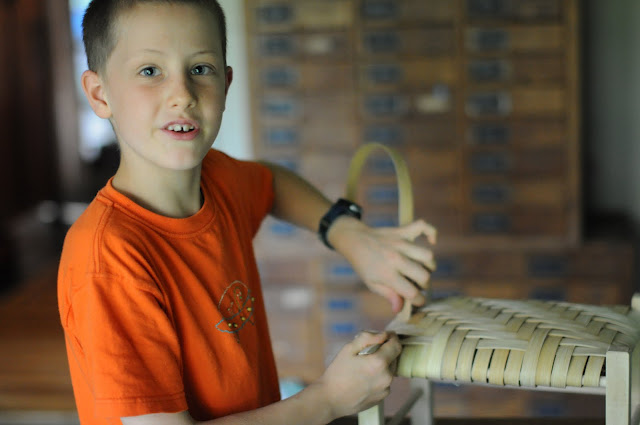 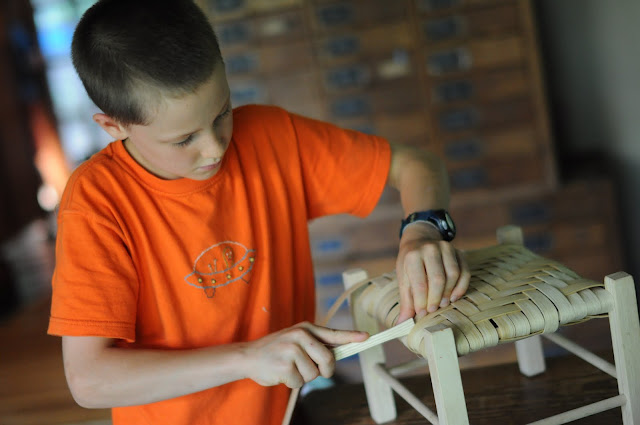 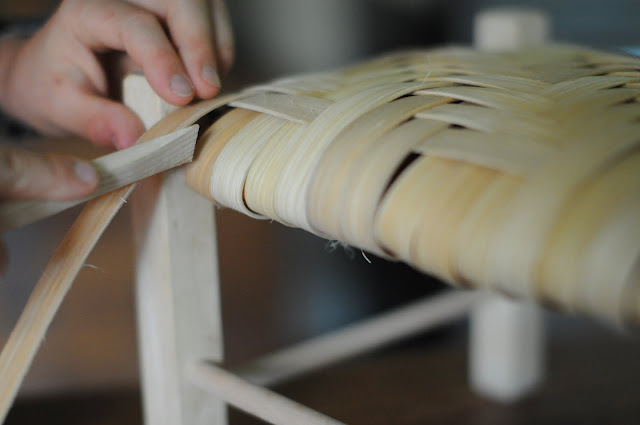 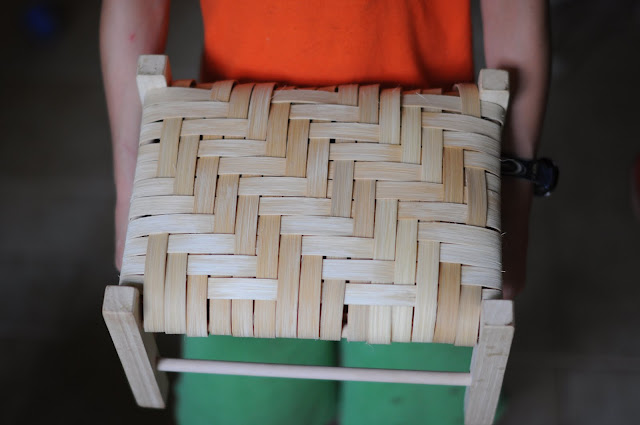 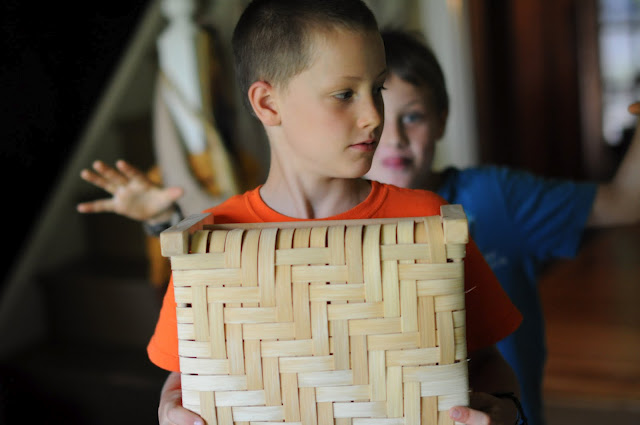 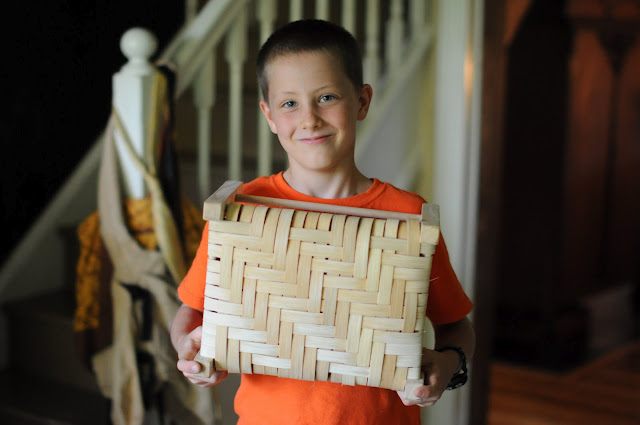 For what must have been months, Keats asked for basket weaving materials.  I hesitated to purchase materials for yet another craft, at the risk that the materials would never become the baskets they were intended to.  But he was persistent, and eventually I relented.  Keats is after all, the one of my boys who has stuck with knitting, now working on his third hat.  He is the child who takes his time whether he is practicing cursive handwriting, or creating something that he wants to be beautiful.
Along with materials to weave several different types of baskets, Keats asked for a  New England footstool kit.  Today, the box of materials arrived, and Keats eagerly began reading through the footstool instructions and soon started working in his typical careful fashion.  At some point though, he realized he had warped the stool incorrectly, and realized he would have to begin again.  I could see the disappointment on his face, despite his efforts to mask his feelings.  I reminded him of the times I have spent precious minutes knitting, only to realize I’ve made a careless mistake and had to spend twice the time, ripping back.
He peacefully began the task of unwrapping the reeds, and placing them back in the water to soak.  After warping the stool again, this time getting it right, he decided to take a break.

After a wonderful and productive day, even including a brief visit from some friends, late afternoon hit, and something shifted for me.  I made a quick run to the farm stand down the road to pick up a few things to go with dinner, and a watermelon for a snack.  I came home, cut the melon in half, and realized it wasn’t quite ripe.  Seth wanted me to drive back to the stand and get another, but I very much didn’t want to.  About the time I was debating what to do with the melon, Beatrix informed me that she needed her cloth diaper changed, the unpleasant sort of diaper change that I thought we were past months ago.  I looked at the clock and realized that dinner was going to be late, just as Jonny walked in the room with a hungry Silas who had just woken from a nap and needed to nurse.  My mind started to feel intense overload, and I felt frozen, unsure of what to do first.
About that time, Keats yelled downstairs at me, complaining about having to clean up someone else’s mess.
Something in me snapped, and I yelled back at him.  My words weren’t mean, it was more of a martyr mom moment.  But I yelled angrily them nevertheless.  Keats yelled something back, and I could hear the tears in his voice.
I stood there for a moment realizing what I had done.  I don’t often yell at my kids, so when I do I think it’s a bit of a shock.  And honestly, I can’t remember the last time I lost my cool with Keats.  He’s my sensitive  child, the quiet sweet one.  He’s the little boy that was stuck to me like glue until he was about five years old.

I walked upstairs and saw Keats’ crushed little face, and felt my own self crushed under the weight of what I had done as I watched him bravely fight tears.  I apologized, I kissed him, and I walked into my bedroom.  Still feeling unable to forgive myself, I called him in the room, asking him to forgive me, needing to be sure that he understood how sorry I was.
Later, there was a fight between brothers, Keats this time being the rare aggressor.  I watched his face through the glass as Jonny talked to him outdoors about what had happened.  So much emotion there, and I wondered: was this related to my mistake, my shouted words?
Keats angrily came back inside, slamming the door, and he hid behind a couch as I approached him.  I spoke to him, simply saying, “Keats, I was hoping you would finish your footstool in the kitchen with me, while I make dinner.”
He didn’t reply, but minutes later, there he was, patiently weaving those strips, carefully and patiently.  We talked about our work (I was thankfully working to make one of his favorite dinners) and he proudly finished his stool soon after.

I know that there were lessons learned today by all. Mistakes were made, but forgiveness was given, and love was woven through both the bad and the good.
This evening Keats and I sat side by side with our knitting, and tomorrow we have basket weaving plans.