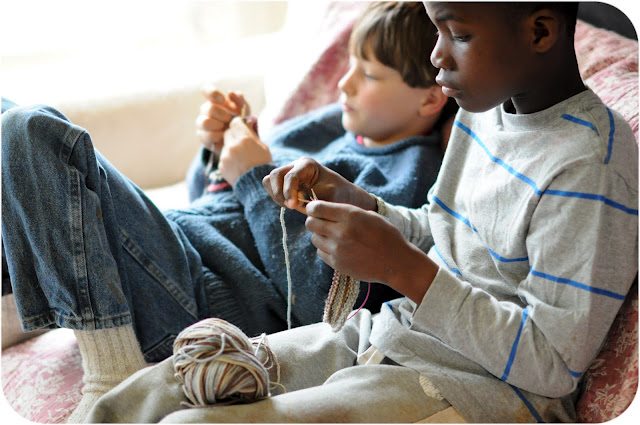 (the last photo taken with my D90)
Last Friday, I did something really painful.  After months of saying I was going to do it, I very carefully boxed up my camera body, and drove it to UPS.  It is now on it’s way to the repair shop (backfocusing issues.) I had to make myself do it without thinking too much about what I was doing.  I swear I could have cried when I left that box sitting on the counter, and turned around to walk away.  Silly, I know.  But photography has become a part of my days, and I am going to miss taking pictures.  Today, I will have to attempt to take a photo of my knitting for tomorrow’s yarn along with my point and shoot camera.  I can’t get the hang of that thing.  It’s only temporary though.  I should have my camera back in less than two weeks.  I have a load of pictures that I took last week and will be writing about a few things this week and next that I thankfully documented before sending my camera off, so all’s well.
Today, I’ll just give a bit of an update on what is going on around here:
Well, number one, is that everyone but Beatrix is knitting.  Keats even sat down and re taught Jonny the other night, which is just as cute as can be.  Seth finally caved and asked me to teach him and he is absolutely hilarious about it.  He is a nervous knitter, knitting tight little nervous stitches.  His knitting is so very just like him.  In the evening, when all three boys are sitting in a row on the couch there are constant cries of, “MOMMYYYYY!  I think I’ve messed something up!”  or “MOMMYYYYY!  I think I dropped a stitch!”  Most of these cries come from Seth, who usually hasn’t actually made a mistake at all.  He’s just compulsively counting the number of stitches on his needle, and miscounting.  All three boys like to talk about my chocolate box, the little tin box where I keep my tools, including crochet hooks for picking up dropped stitches.  I often hear Gabe saying to his brothers as they discuss whether or not they have messed up, “Mommy better grab her emergency kit!”  I can’t tell you how wonderful it is to sit those wild boys down on the couch in the evening and watch them wind down and relax as they knit.  It’s amazing.
Let’s see…on a stressful note, I realized that I made a mistake on last year’s taxes.  Adoption complicates things a bit and I should have paid a professional last year, rather than using tax software.  Now it looks like I am going to be filing an extension, an amended 2009 return, and I don’t know what else.  YUCK.
In homeschooling news, I will be wrapping up our school year this month.  I am ordering my books and supplies for our next year which will begin first of July.  I want to start early, so we can take lots of time off in the fall when the weather is nice.  May and June will be months to focus on the new baby, although I will still be homeschooling Gabe during that time.  I can’t really afford to take breaks with him, so we will continue to work on math, phonics, and writing.  He’s making slow but sure progress and I am proud of him.  Teaching him is such a challenge, and has been a real opportunity for growth and learning on my part, not just his.
I think I will stop boring you with all these details now.  I think of you guys as my friends and sometimes, I just feel like I need to tell you what’s going on here right now, rather than just telling you what we made last week or whatever…  I also know that I have been a little more absent in this space than usual, and wanted to give a bit of an explanation.
See you tomorrow for the Yarn Along!