During the Highland County Maple Festival, many of the farms in the area open themselves for tours by the public sharing the way they make maple syrup, offering their maple syrup for sale, and if you are lucky, you might even get maple donuts.  In addition to touring farms, there are craft shows held in local schools along with all you can eat pancake and maple syrup dinners.  The festival is very popular we learned, and very crowded!  We only visited two farms, but they were at the two opposite extremes of making syrup, totally old fashioned, and totally modern.  I will do my best to recall for you some of what we learned… 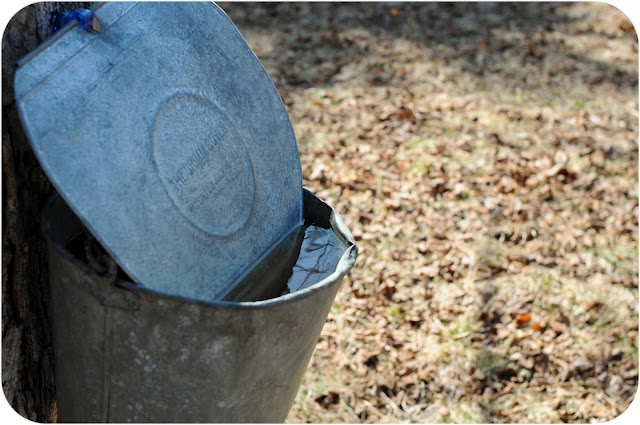 At Duff’s farm, sugar water (he was quick to teach us that it is incorrect to call it “sap.”) is collected in buckets hung under taps that have been inserted after drilling holes into the tree using some sort of  (non electric) hand tool.  At other farms, electric drills are used making the process quicker, but Mr. Duff and his wife are not in this to make money or be efficient, he loves his old fashioned process. 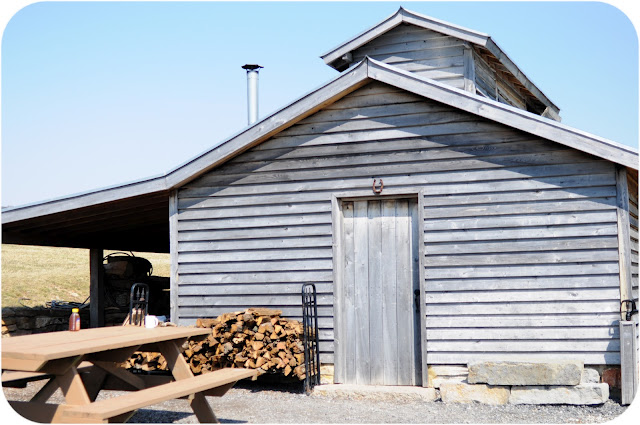 This is the outside of the sugar house.  Sugar water is gathered from the many buckets hanging on the trees around the farm and transferred to larger jugs, and then emptied into a tank at the back of the sugar house.  Mrs. Duff does this when she arrives home from teaching school.  This is her stress relief her husband says. 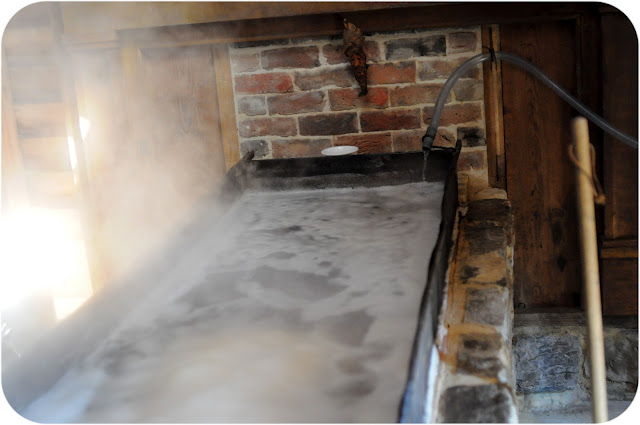 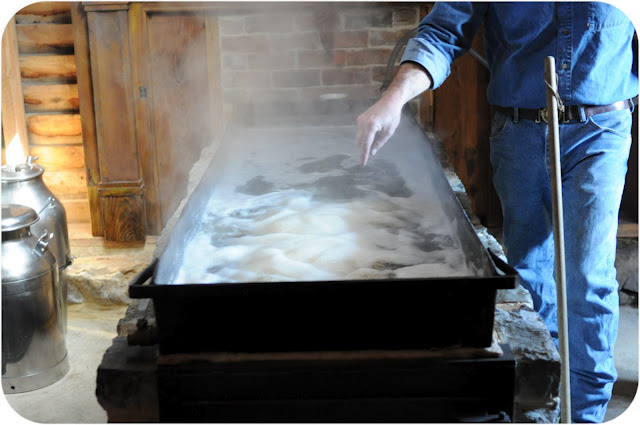 Here he is talking about that bubbling that is going on–the foamy looking bubbles at the front.  That foamy stuff isn’t good-although I can’t remember why, something about efficiency maybe.  He adds a bit of milk, maybe a teaspoon or so to correct the issue.  I was holding Beatrix who was styling my hair (painful process) while trying to pay attention to Mr. Duff talk and take pictures, so much of what he said floated in and then quickly made an exit out of my pregnant brain. 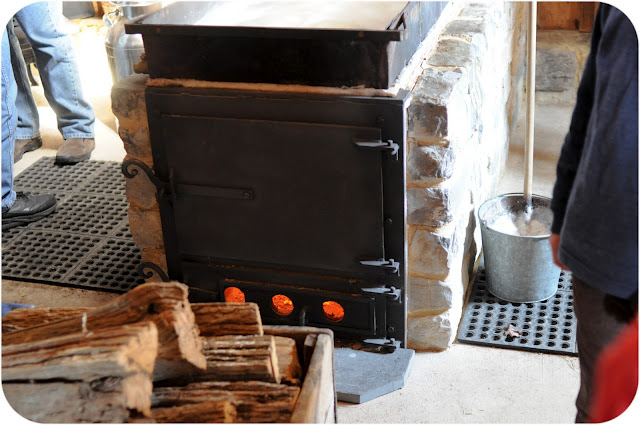 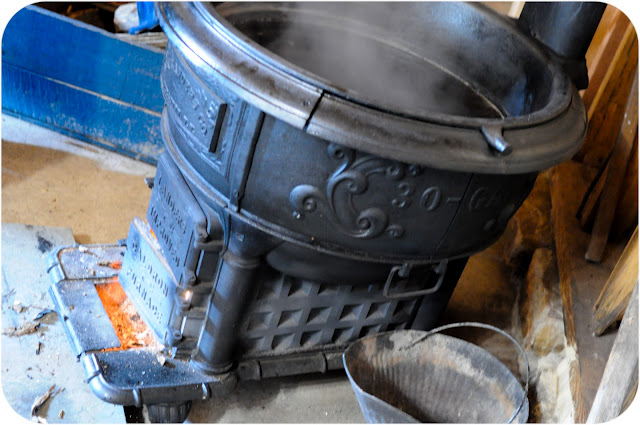 The syrup moves to the pot over this stove to be finished.  I mostly missed what he said about this part altogether.  So did Jonny.  It sounded a little complicated, and it sounded like he is really good at what he does.  I think that cooking over this little iron pot allows more control over the last part of the process.
A hydrometer is used to measure the density of the syrup.  Too dense and it will crystallize.  Getting the density right where it needs to be sounded pretty intense. 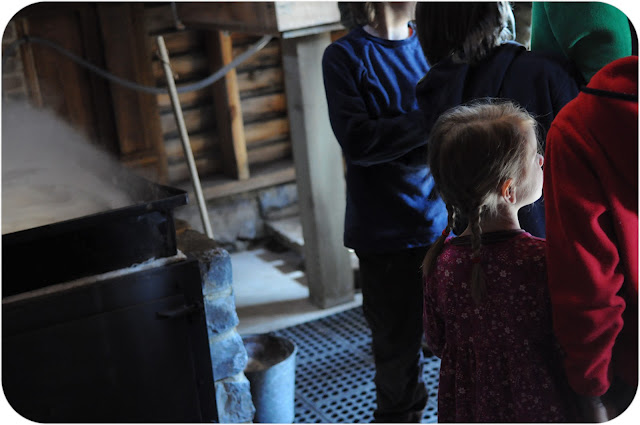 During the days of making the syrup, Mr. Duff is up late, and then up very early to monitor the process.  Making syrup the old fashioned way is very labor intensive, but that is just how he wants it.  He’s not trying to make a living, this is his hobby.  He wants nothing to do with anything modern, and because of this, he is only able to produce about 35 gallons of syrup each year.  At the modern farms, they can produce that amount in an hour (I think that’s what he said!) 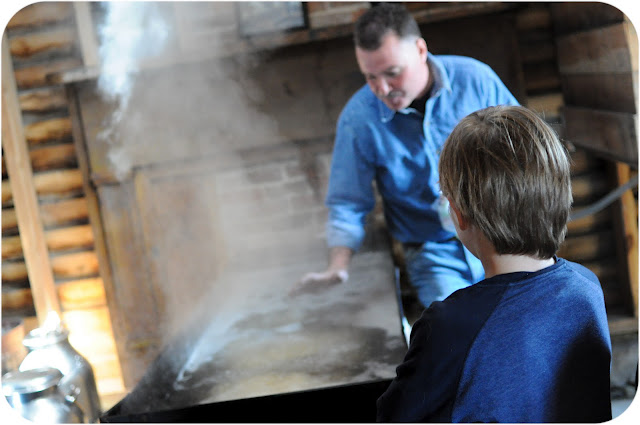 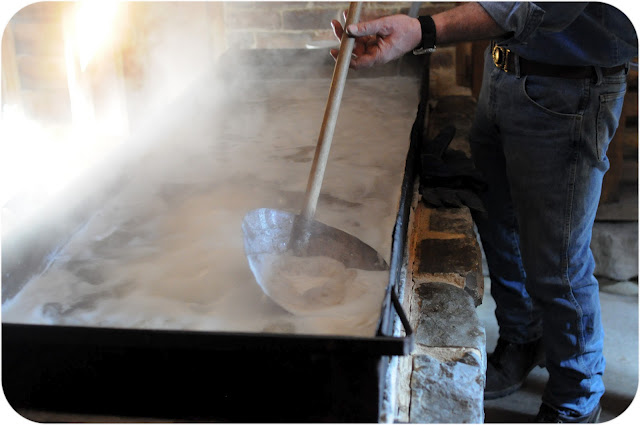 He uses this scoop to scrape the foam off. 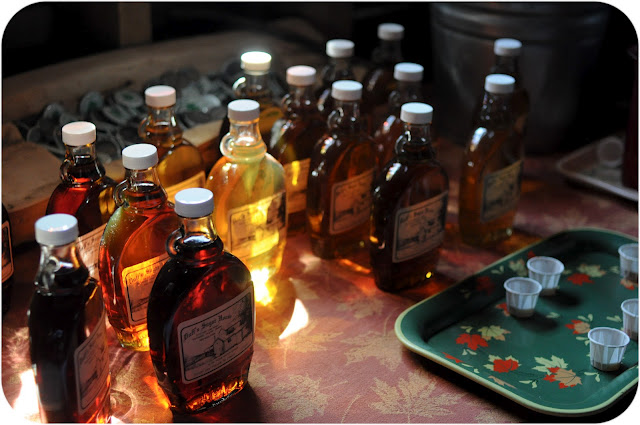 There were samples of maples syrup to be tasted, and my kids were even given pieces of maple candy from a “secret stash.”  I bought three of the precious bottles of syrup. One is for a gift, and the other two–I don’t know when I will deem a meal worthy of it.  This syrup is unlike any you will ever taste.  Because it is produced the old fashioned way, in cast iron, it has a wonderfully unique flavor, definitely the best I have ever tasted. 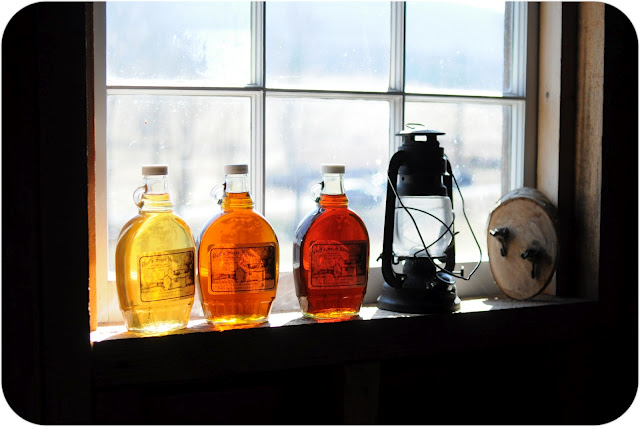 The syrup produced changes color through the season.  I can’t remember which comes first, the dark or the light–I think the light.  The darker syrup has a richer flavor, our favorite. 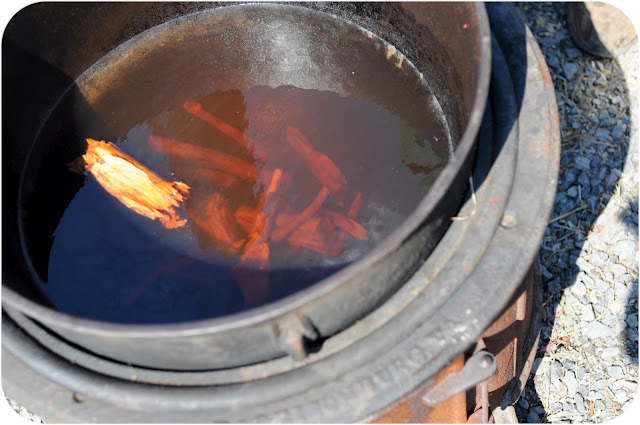 Outside the sugar house, there was a man making sassafras tea.  I didn’t taste it, but Jonny and the kids did.  They actually dig sassafras root here at home to make homemade root beer, so they were interested in the tea, although they prefer their own root beer which includes vanilla and spices. 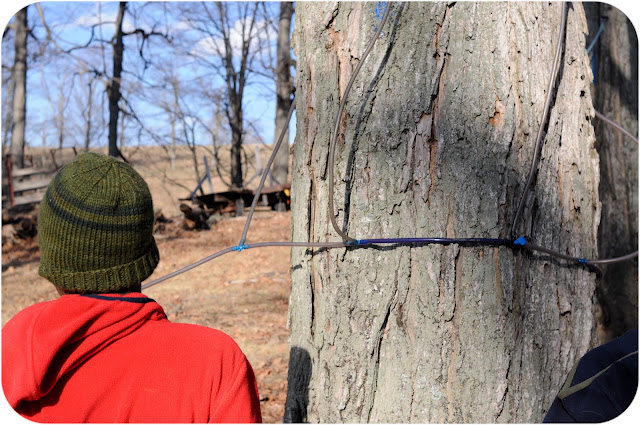 So here is the second farm we visited, Puffenbarger Sugar Orchard.  This farm uses all modern equipment, and they also sale maple donuts by the dozen.  Think Krispy Kreme, but a bit more all natural, with the sweetening in the donut and the glaze coming from maple syrup.  Or maybe you shouldn’t think about it, and neither should I.  Ours were warm. 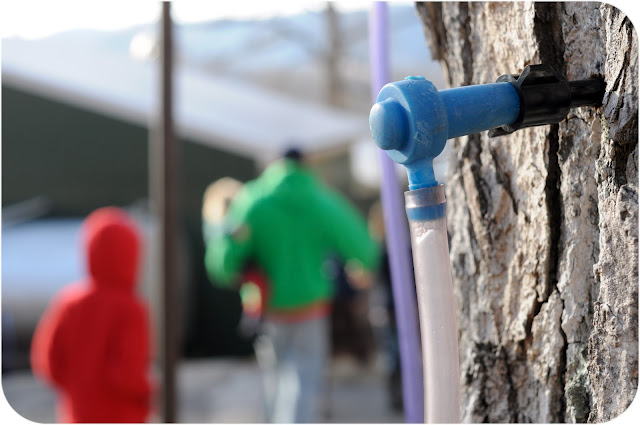 At this farm, and many of the other more modern ones, sugar water is collected using plastic tubing. The tubes run from the taps on the trees to central tubes that all run to a big tank at the back of the sugar house, or something like that. 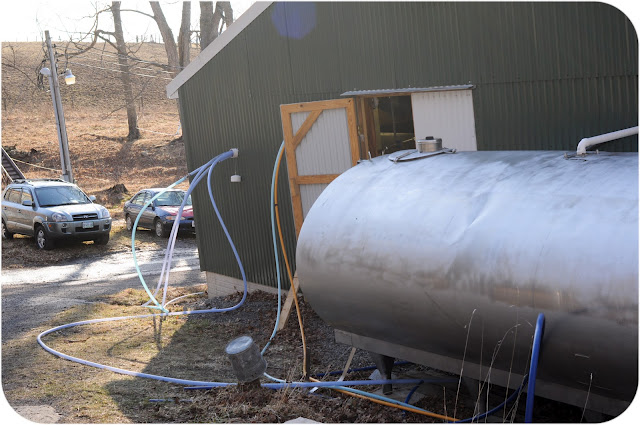 That tank is full of sugar water. 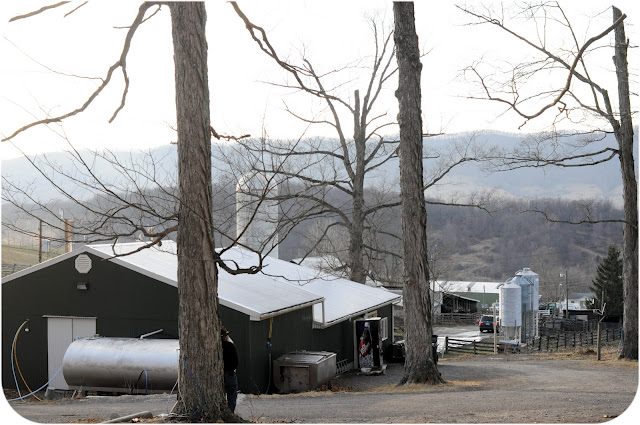 Here’s a better view of the farm from the back.  The green building is the sugar house.  Everything in the background is related to cattle, I believe. 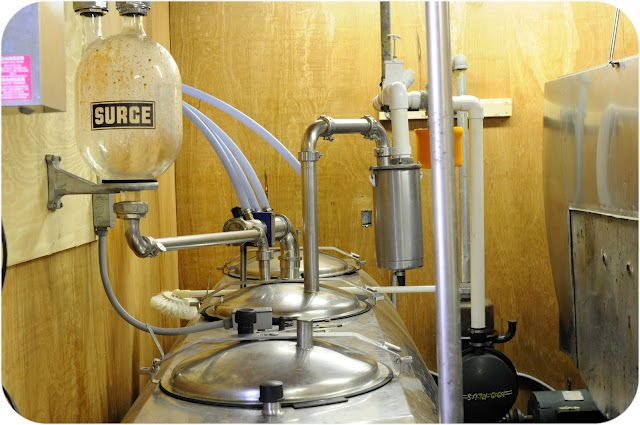 Inside there is lots of shiny, fancy, modern, equipment producing lots and lots of maple syrup. 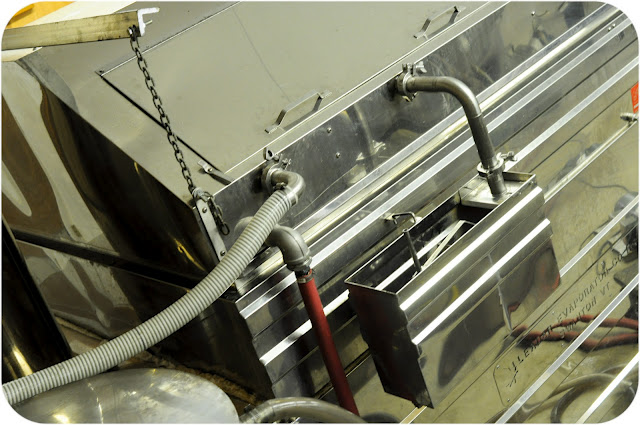 It was really neat to see the contrast between the different ways of doing things.  If you want to make a living producing maple syrup, you have to go the modern route.  We bought a gallon of syrup from this farm, and it is definitely superior to the maple syrup we buy at Costco.  I wish we could have stocked up on even more syrup while we were there, but I didn’t have hundreds of dollars sitting in my pocket waiting to be spent on such a luxury.  We’ll make that gallon stretch! 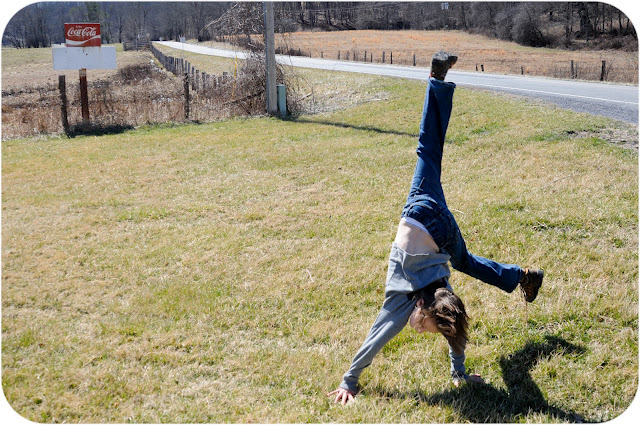 And because I can’t end a post with a picture of shiny metal equipment, here is one of Keats, who practiced his cartwheels the whole trip and requested that I take lots of pictures.  I can’t tell you how many photos I have of him cartwheeling or jumping off of things.  He is really into pictures of himself flying through the air.