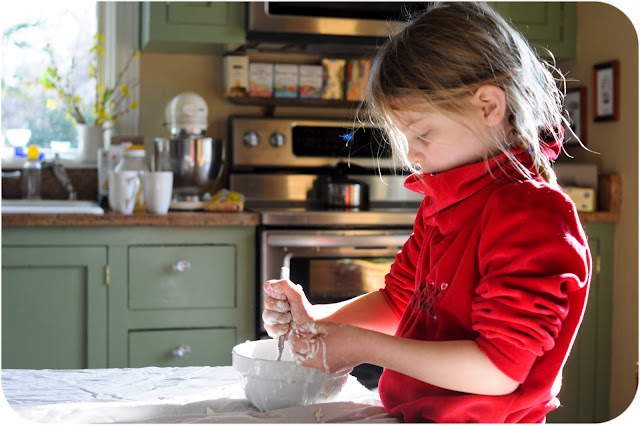 Maybe you’ve noticed that I haven’t developed a great series of posts all about the creative things I have been doing with my girls while Jonny and the boys leave me stranded at home go snowboarding one day each week.
After the first week I sort of ran out of fabulous ideas apparently.  I’ve searched through books and blogs and made lots of plans, but my plans have all flopped for the most part.  (I consider a craft or activity a flop if it occupies the girls for less than five minutes or causes excessive crying for some random reason.)  I have also been trying to have playdates on these alone days for the girls since they so rarely have the house to themselves, but playdates are nearly impossible this time of year because of illness I have learned. 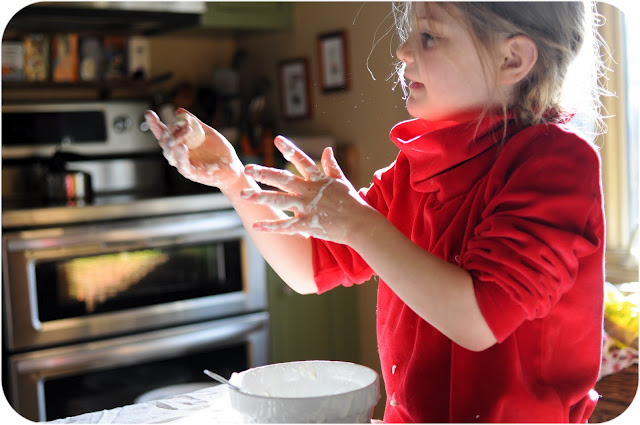 I remember now how hard I thought life was when Seth and Keats were my only children and they were about this age.  Honestly, it was harder back then (so those of you with just a couple or a few young children-yes I think your job is harder than mine!)  I definitely believe that things have gotten easier for me as I’ve had more children.  It’s not just that my boys are older now and more helpful, but they also play with their little sisters.  The girls do not play independently very often lately, and besides, if she’s home with just me, Larkspur doesn’t really like to play anyway. She likes to craft, non stop. 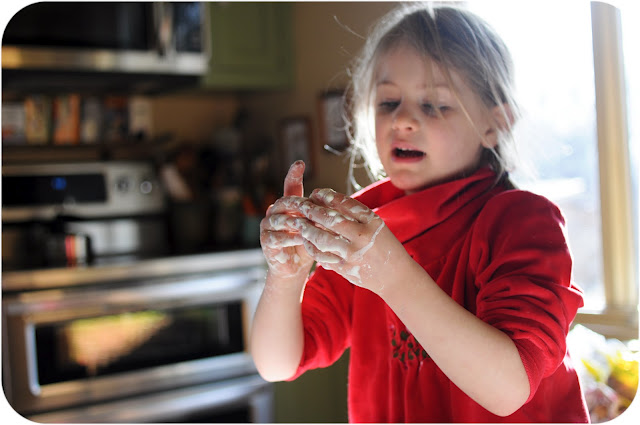 This morning, as she dug her hands into cornstarch and water goop , she talked a mile a minute about all the craft plans she had made for the day.  The tricky part is that most of her plans are really unrealistic if not impossible and she is not very flexible on the details (felting wool on paper to make wooly paper dolls???) or just not allright with me.  For instance today she wanted to make play dough using her own recipe (fine) but then threw a huge fit because I wouldn’t give she and Beatrix free reign over the food coloring (I’m not that crazy) or give them the boys’ paintballs to bust open and dye the dough with.  I am so very much a says “yes” sort of mom,  but my kids come up with stuff that I just can’t manage sometimes.  We still talk about the night that Keats (around age 3), at bedtime, began crying that he wanted to go the octopus zoo, right that minute.  We couldn’t say yes to that on more than one level, especially the “we have no idea where there’s an octopus zoo” level. 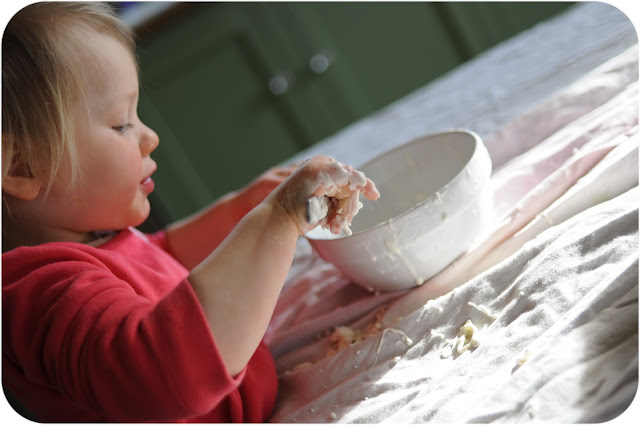 So back to today: Beatrix woke bright and early, announcing to me, “eyes open!”
followed by a very loud “Cock a doodle doo!!!!!!!!!” which woke Larkspur, and so began our day. 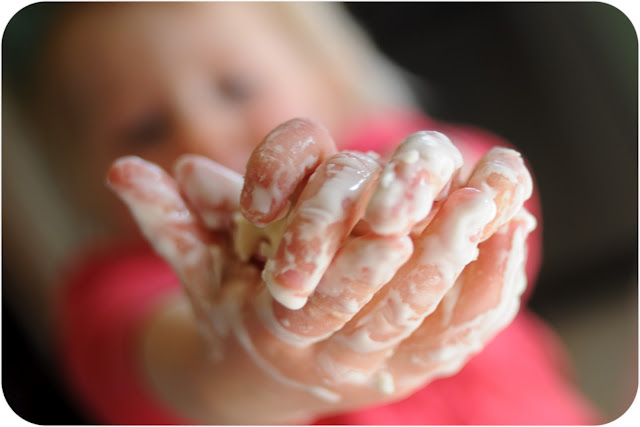 Breakfast was quickly followed by the cornstarch goop, followed by making play dough (three different recipes-more on that later I think.) 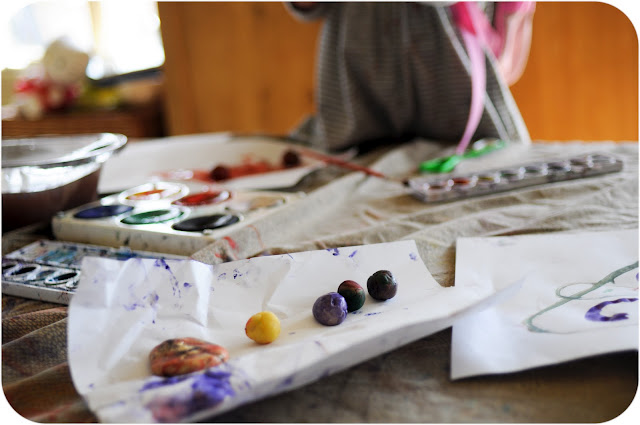 Then it was on to watercolors, and “making marbles” out of the play dough, and painting them with the watercolors.
After that, the day begins to blur in my mind. I do clearly remember finding flour tracked up the stairs and throughout the house by little feet but can’t recall seeing it happen. At some point Trudy tracked chicken poop across the kitchen floor, and while I cleaned it up, Larkspur cried over the food coloring I wouldn’t give her. 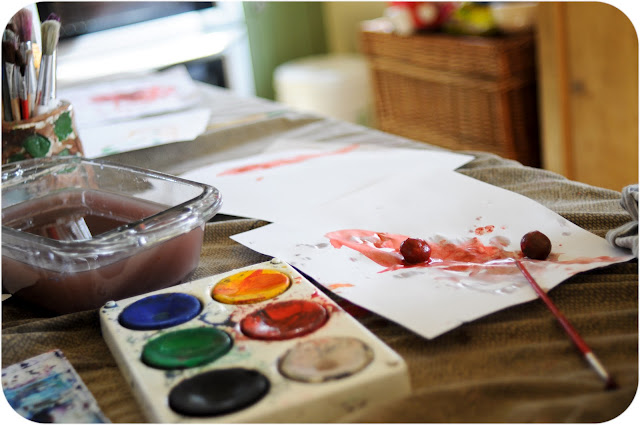 I made a silly resolution this morning not to drink my one cup of coffee today, but by lunchtime I was on my second cup.  I also broke my new rule of replacing half and half with whole milk.  In addition to the half and half there was extra sugar too I think.
Thankfully we had yummy leftovers for lunch (recipe at end of post if you are not familiar with Molly’s style,) so there was no worrying about what to eat.
(my kids all liked this meal-I omitted the red pepper.) 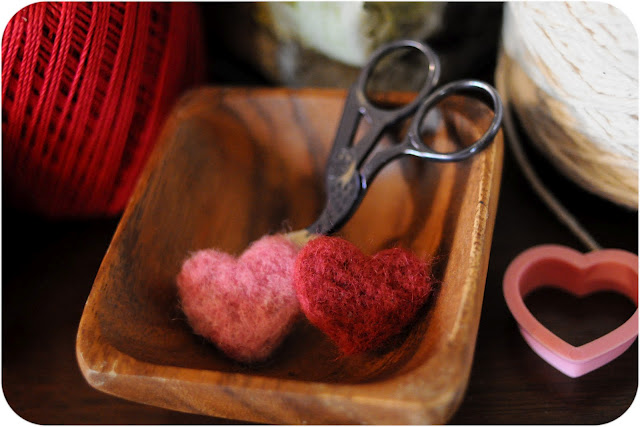 I managed to needle felt a couple of hearts today, and funny, the boys noticed those two tiny hearts in the bowl not long after arriving home this evening from their day on the slopes.  I love that they notice little things like that.
They always arrive home so ecstatic after snowboarding, talking as fast as they can, pulling up maps to show me the trails they rode.  Seth hit the “black diamonds” at their little resort today.  He’s so proud of himself, and he’s counting the days until he can “carve” that mountain again.
Now, as I sit and write, the boys are taking turns making their own felted hearts.
And Larkspur, and all her plans, I love them really.  I think we’ve got some really fun years ahead of us.  Her abilities are going to catch up with what she wants to accomplish, and her plans will get more realistic with time as well.  I am going to have my own little crafting partner.  It’s going to be great.
And, I think I just might go to bed early tonight!