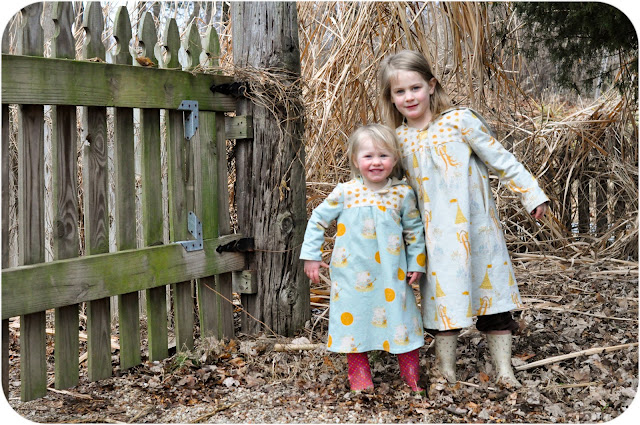 I have had this pattern, and this fabric sitting on my shelves for months, but just couldn’t for some reason make myself attempt the pattern or cut that beautiful fabric.  Last week I was in a funk and I knew I needed to find a project that I could complete quickly, as in a couple of days, and also feel like I had accomplished something that has been in the back of my mind for months. 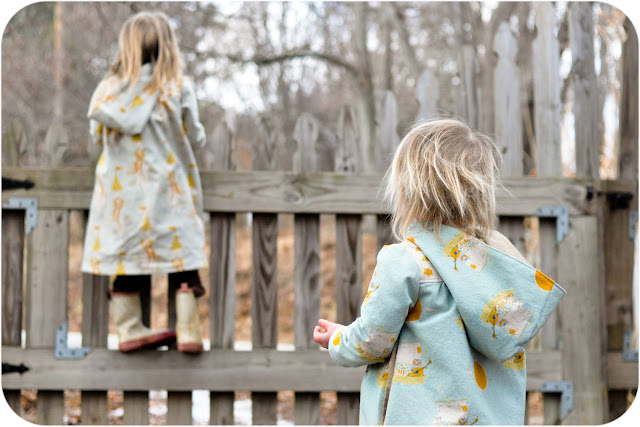 I have said before that I don’t like to sew, but only do it for the finished product, typically something cute for my girls to wear, that I know they will appreciate.  But this time was different.  I tried to address the task mindfully, appreciating each step, rather than focusing on the end product.  I also listened to this album while sewing, which may have helped.

(Funny the contrast between that and what I have been listening to in the car lately!) 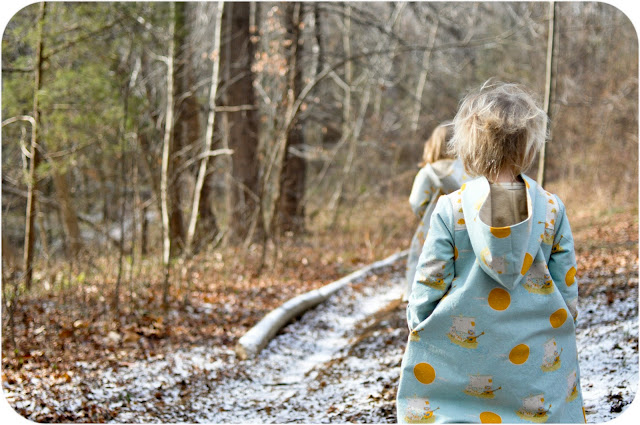 I only made one major mistake, which resulted in me spending more time with a seam ripper than I ever have before in my life.  But, I didn’t cry, I just started ripping. 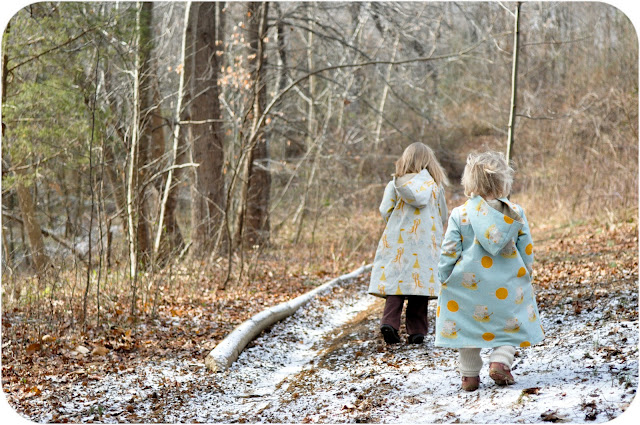 I was almost finished with Beatrix’s dress when I tried it on her and Jonny commented that “that was quite a hood” on it.  I explained to him that it was the look, and it was supposed to be big.  But, when I checked my pattern pieces, I realized I had put the size 5 hood on her size 2 dress.  I tried to tell myself that it was okay, and I could leave it.  But when Jonny, with a sly smile on his face, said that he thought it was fine, and it just reminded him of Star Wars, I knew I had to start ripping.  Star Wars was very much not what I had in mind when I started sewing these dresses! 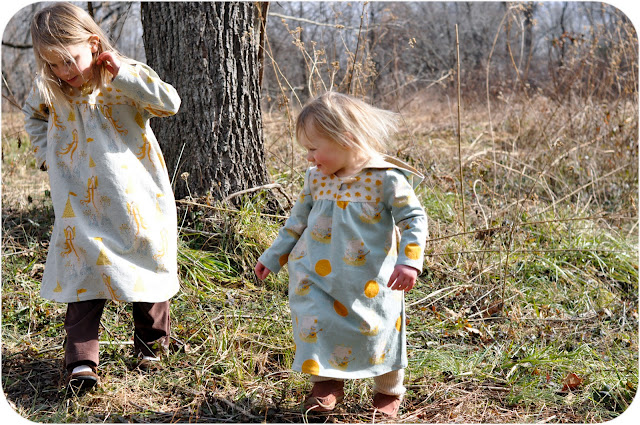 I also know that for me, if I am going to create something, I won’t be fully satisifed if it isn’t done right, and it was worth the extra hour to redo the hood. 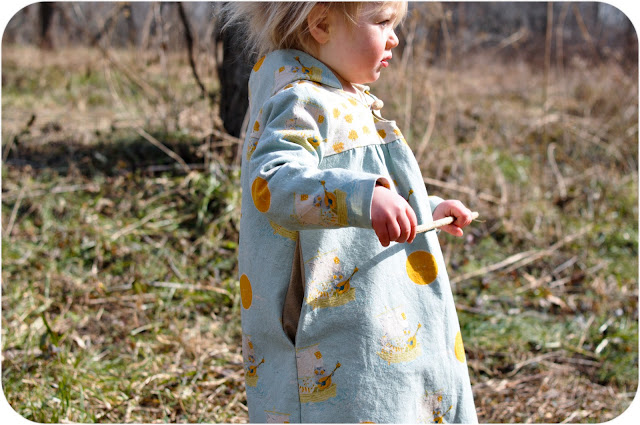 So about the dresses:  They are fully lined in flannel, and even have flannel pockets, which were such a bonus for my girls.  Those pockets were immediately filled with deer corn and rocks.  This was my first go at pockets, and the way they were done, it was really easy.  In fact, there was nothing particularly tricky about this pattern, and I found it very well written. 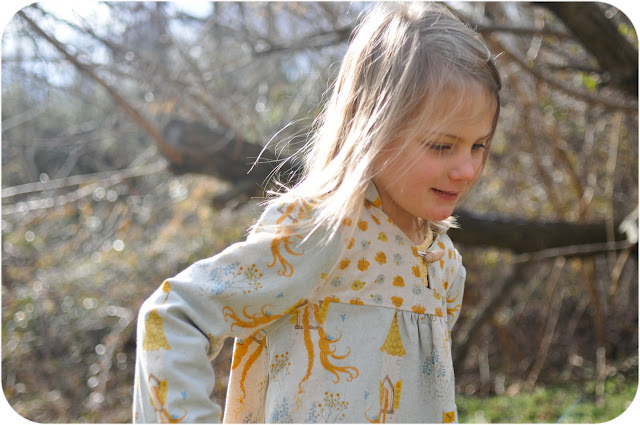 Regarding the Heather Ross fabric: I ordered it long ago, in fact, I pre-ordered it before it was even released, not something I usually do. I just fell in love with it and had one of those “gotta have it” moments, that aren’t always entirely responsible. I didn’t really know what I was buying in terms of what the fabric would feel like, and was a bit concerned when I received it. It is a somewhat heavy cotton/linen blend, and a bit scratchy, but it’s still really beautiful fabric. I knew my girls couldn’t wear it against the skin because they are really picky when it comes to the way their clothing feels. I prewashed it several times and that did soften it up a bit, but it has little bits of scratchy organic material in it (don’t know how else to describe it!) Pairing it with the flannel lining in this dress is actually perfect. The heavier weight of the outer fabric makes the dresses warmer and more substantial.

It is very cold here, so the girls have to wear shirts and pants under the dresses to go outside, but that is just how you dress in winter!  I think in the early spring and in the fall they will be really perfect 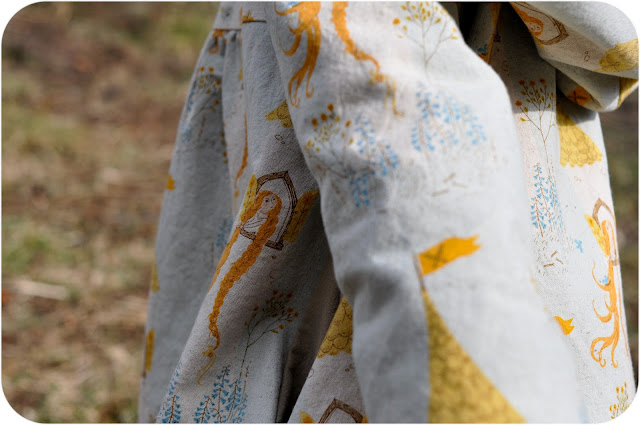 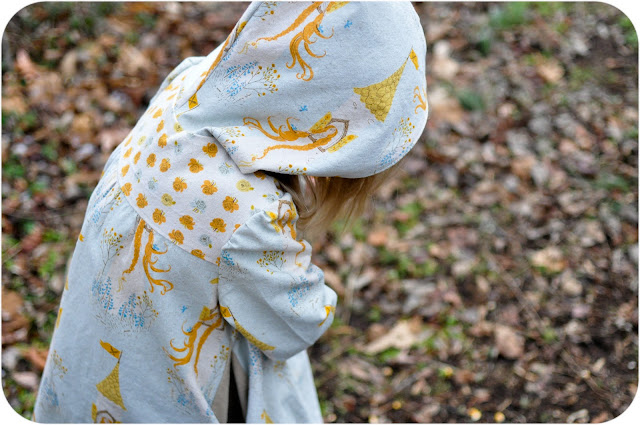 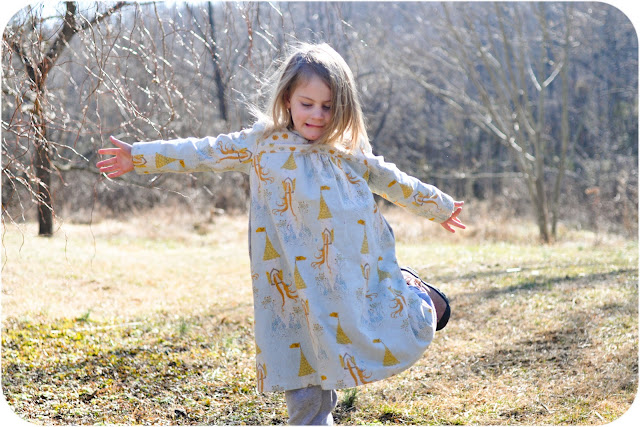 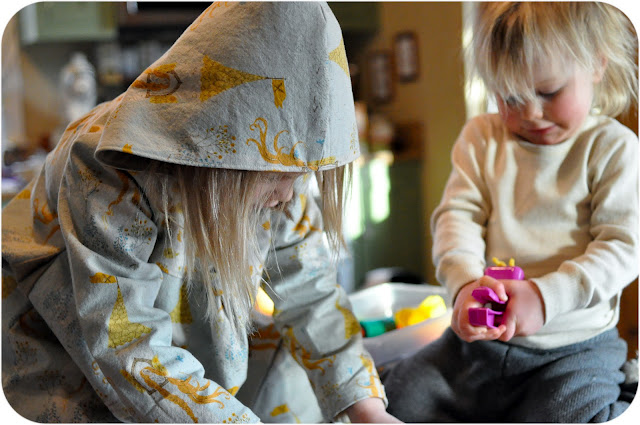 I worried a bit that the dresses wouldn’t fit comfortably because of the lack of “give” in the fabric, but Larkspur has been wearing hers for two days straight both inside and out, so my worries were unfounded. If it wasn’t comfortable, she would not wear it at all. 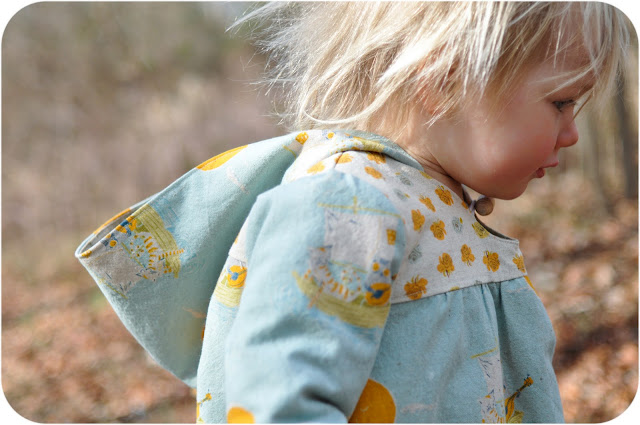 And Beatrix, she is the cutest when it comes to receiving something mommy made.  When I was sewing her dress, she came to me and asked, “New dress for me?”  When I replied that yes it was for her, she squealed, “Yay!!!!!!” while clapping her hands.
Maybe that’s part of the reason I have decided that I do like to sew.