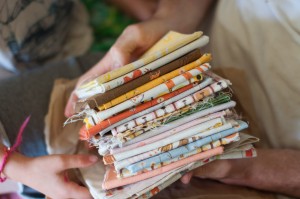 There were several sewing questions asked in the comments about Beatrix’s birthday dress, so I thought I would give a little overview of my first sewing experiences and hopefully cover all the questions.

My very first sewing projects, about ten years ago if I am being totally honest, were a set of flannel wipes to use with Seth’s cloth diapers.  Jonny bought me a serger as my college graduation present and I went straight to work serging the edges of those little squares of flannel.  I still use those wipes!  Next I tried making my own hemp fleece diaper doublers, and about a dozen of those in, broke my serger!  That’s what I get for not attending any of the *free* lessons that came with that machine.  So the serger has been collecting dust now for nearly a decade.  Some day I’ll take it for repair and possibly learn to use it!  Around that same time I used the regular sewing machine that my dad gave me for a birthday to sew the bodies of waldorf dolls.  The doll making lasted a few months and then my sewing days ended.

Since then I at some point sewed a couple of simple baby blankets, but didn’t attempt to sew clothing until April of last year.  My first project was a pair of bandanna pants using this free tutorial.  (here is a link to my project.)

Next up, I sewed the flower girl dress from Heather Ross’s Weekend Sewing.  I was so excited over that dress.  I learned a lot, and went on to make a couple other projects from that book.  It doesn’t have the best reviews, but I felt like that book taught me how to sew.

Anyway, you can watch my progression of projects as I graduated to more complicated patterns and such by searching my “sewing” label.  I think I was always sure to link back to my pattern sources and such.

, and I also learned a good bit from Amy Karol’s Bend-the-Rules Sewing: The Essential Guide to a Whole New Way to Sew

And finally, because I was asked about cutting out patterns: the way I use patterns is to first trace them onto pattern tracing paper that I buy at JoAnn.  Just ask the ladies at the cutting counter, and they should show it to you.  At my store it is stored right behind the counter.  It is a semi-sheer material.  It goes on sale 50% off periodically and then it is a good idea to buy a whole bolt!
After tracing my pattern pieces onto the pattern tracing paper, I cut them out using a rotary cutter on a large self healing mat.  Next I lay the traced and cut out pieces on top of my fabric according to the pattern instructions and just cut them out using the rotary cutter.
There may be a better way, but this is what I do!

Now, onto an entirely different topic!
I am about 13 1/2 weeks along now, and I visited my midwives for the first time yesterday.  Honestly I don’t usually start prenatal care until 16 weeks, but I have had this nagging feeling that something wasn’t right with this pregnancy and was ready to talk to my midwives.
My nausea started early and was really bad this time, but then it stopped suddenly almost as soon as it had started.  The end of my all day nausea coincided with an incidence of bleeding around 7 weeks.  That is when I posted that I went in for an ultrasound (not with my midwives, but at an imaging center adjacent to our hospital) honestly expecting that I had probably miscarried.  I just had a feeling that I had, despite not having had any previous miscarriages.  I just knew something wasn’t right.  But then laying there for the ultrasound, expecting the worst, there on the screen almost immediately was this little heartbeat and I had the hardest time not bursting into relieved tears.  That ultrasound lasted an awfully long time and there were many many measurements taken, but not having had early ultrasounds before, I thought maybe that was standard, and maybe it is.  At any rate I went home with the knowledge that my baby’s heart was beating and that was all that mattered.  I was told that we would be contacted with the results in a few days.  Those results came over the phone while I was in New Mexico and Jonny was simply told that the baby was fine, and all was normal.  Over the next few weeks I had a few episodes of spotting, but none as significant as the first one, and I just tried to tell myself that it didn’t mean anything. I’d seen the heartbeat after all.

So here we were about a month later sitting in the familiar waiting room at Birthcare, Jonny reading through my chart (they always hand over the chart when you arrive for an appt.) while I filled out paperwork, when Jonny exclaimed that according to my 7 week ultrasound I had been carrying twins and the diagnosis for my bleeding was the death and miscarriage of one of them.  I guess those things aren’t shared over the phone, because we never knew.  I just carried this feeling that something was wrong for this past month feeling a little crazy for doing so.

Once I was up in a room with my favorite midwife I pointed out the printout from the ultrasound to her, to make sure we weren’t mistaken, but she agreed that was indeed what the ultrasound said and that it explained the early nausea followed by it ceasing around the time I had the episode of bleeding, and would explain the subsequent episodes of spotting.

I realized she was expecting me to maybe have a sad reaction, but really it was such a relief to have the answer to the bleeding and the feelings I have carried with me since.  On some level I knew I had lost a baby, but obviously couldn’t reconcile that with the clearly live baby I saw on the ultrasound, and so just felt unsettled and confused these past few weeks.  I never thought of twins, never.

Next it was time to listen for this baby’s heartbeat and it was such a relief to hear it beating strong that I almost burst into tears there again, and would have, except I am one of those who hates to cry in front of people and try my hardest not to!

I have worried so much about this baby which isn’t typical for me, and it never occurred to me that there was a second, so my overwhelming feelings yesterday were relief and thankfulness.  I can stop worrying now.  Of course both of these babies have been in God’s hand from the start, and I shouldn’t worry anyway.  I know I would have had a hard time had I known about the second baby and then lost it, but having things happen this way, I never knew there was more than one, and I am just so grateful that this one is alive and well.  I believe that I will always wonder about our other baby though, but I am not going to let myself think sad thoughts.  It’s far better to focus on the positive and all we have to be thankful for!

And maybe, this is just a little heads up that twins may be in our future!