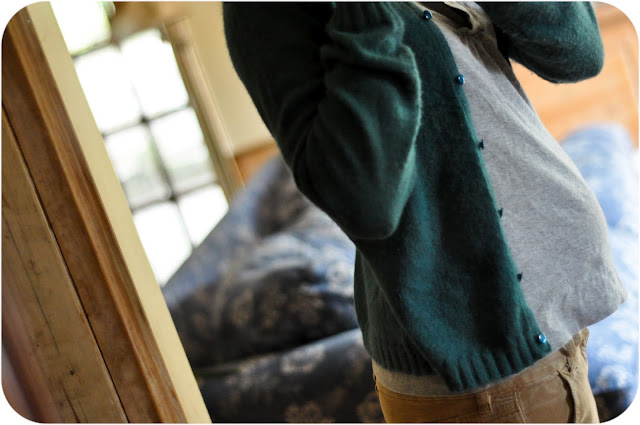 I thought I might share my first pregnancy photo (a work in progress indeed!), since at about ten and a half weeks I do look pregnant.  Of course I always look pregnant and have for the past ten years or so, it’s just become impossible to “suck in” effectively these past couple of weeks.  I will forever remember the mom who was kind enough to lift her shirt to show me her perfectly flat, non wrinkly, tanned I might add, stomach after having three babies in about five years, while exclaiming, “I don’t look like I was ever pregnant!!!”  This was after I had expressed concern that my stomach would never be flat again (it won’t be!)  She was so kind to share with me, don’t you think? 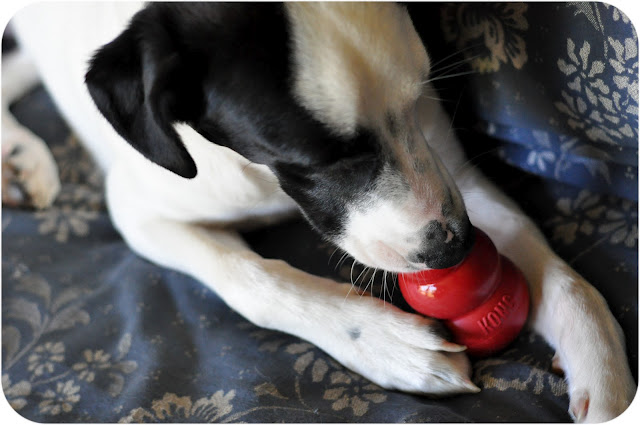 Off topic:  I wanted to say thanks to the suggestions on my Trudy post, I did get her a Kong toy which we put peanut butter in.  She loves it and the way she holds it with her paws is really adorable.  Nothing has been destroyed in about a week so I guess we’re due. (I also bought her more real bones to chew on, but no rawhide!) 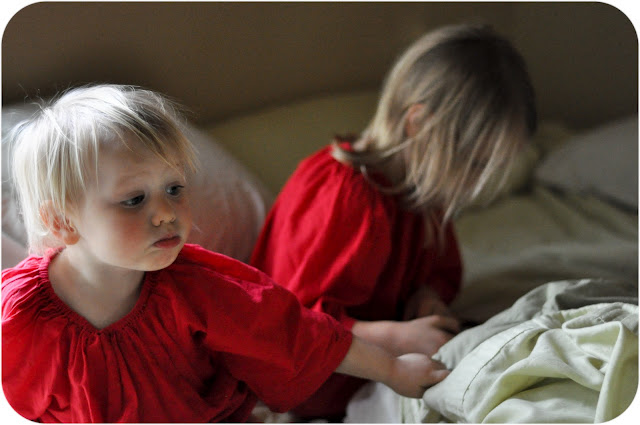 I often get comments about Beatrix’s hair because it is pretty out of control I guess (although it is sort of laying down in this photo!)  I just want to state for the record that I brush it, but she is very do it herself, and she brushes her own hair too, in the wrong direction typically. 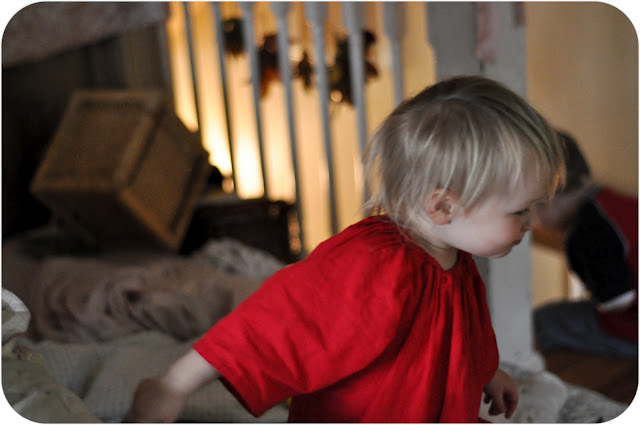 Beatrix has super fine fuzzy hair and does always wake up with some crazy bedhead that can’t necessarily be tamed with a brush. I have just let it become her signature style, because even if I brush it, it ends up sticking out everywhere again.
Both of my girls typically look pretty raggedy in the hair department.  I brush Larkspur’s as well, but she won’t keep clips etc. in her hair longer than a few minutes.  Her hair always seems to be hanging in her face.  I think it grows in that direction!  Now that she has recovered from her last self inflicted haircut, I am looking forward to it growing long enough for braids again, the one hairstyle that she used to keep in for a little while. 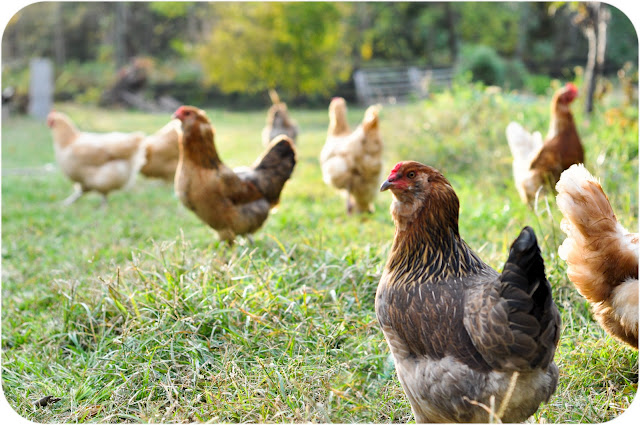 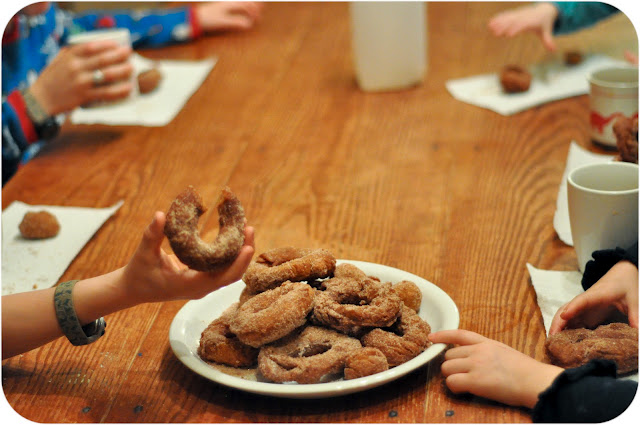 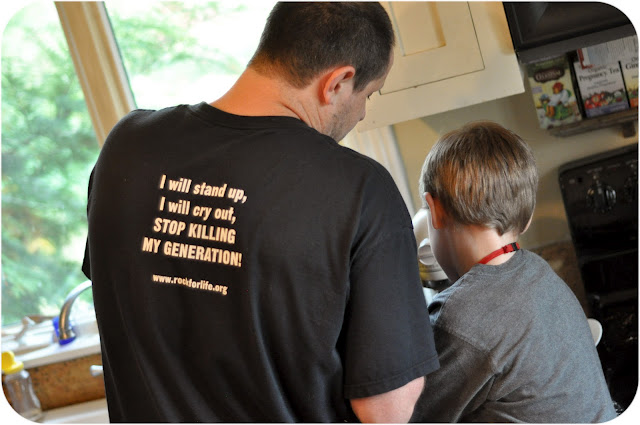 Yesterday was the father son bake off for cub scouts.  Seth was shocked because his dessert, peanut butter chocolate chunk brownies didn’t win any prizes.  Gabriel’s apple pie won second prize in the “most American” category.
We were expecting a bunch of lame entries.  I guess we shouldn’t stereotype like that, especially considering the fact that Jonny bakes most of our desserts, and does a great job.  Most of the other desserts looked really amazing. 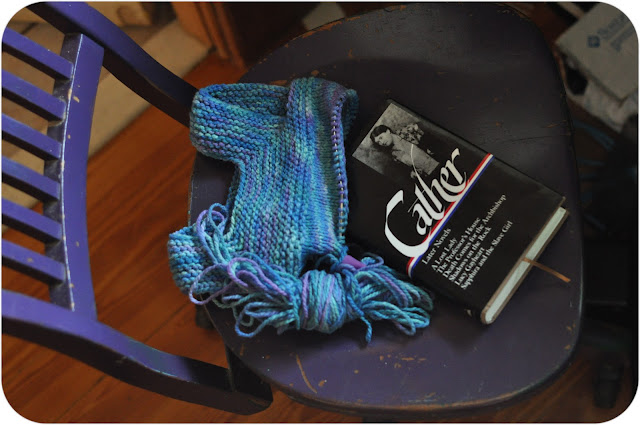 And my other work in progress photo: a Milo vest for Beatrix’s birthday (to go with the legwarmers I already made) and Willa Cather : Later Novels  is my current read.

I bought this book used, and love the edition.  Several of Cather’s novels are included, but it isn’t cumbersome to hold, the pages are very thin, keeping the volume surprisingly thin.  There is even a built in ribbon book mark.  Anyway, I bought this edition when I was looking for a copy of Death Comes for the Archbishop. That novel is included in this volume, along with five others.
****
Something I want to present to you:  I am thinking of doing a regular post, maybe once or twice a month in which I just post a picture of one of my current knitting projects with what I am currently reading.  I’ve been taking these photos myself for over a year now, and like sharing them because they symbolize for me the little bits of time I try to carve for myself here and there.
Then I could get all savvy and add one of those link things so that you could join me if you want to and we could all see each other’s projects and get new book ideas too.  The photo could be part of a longer post of course.  I could call this something really snazzy like:  “knitting and reading” (unless you can come up with a better name-not my best department!)  I will admit that I am afraid of being all alone and feeling like a dork.  I think Tara would play along so that would be two of us…
I will try this next Wednesday, so take a picture and get ready to play along please!  If you aren’t reading, but your are knitting that’s fine-just a photo of your knitting project and on the other hand, if you aren’t a knitter but would like to share what you are reading, just take a picture of that.  I always love to see what other people are reading.  I typically have a stack of books that I am in the middle of, but usually only one piece of fiction that is my regular read.  Okay, now I feel really insecure.  But if no one plays with me I will just get a good healthy dose of humility, never a bad thing, right?