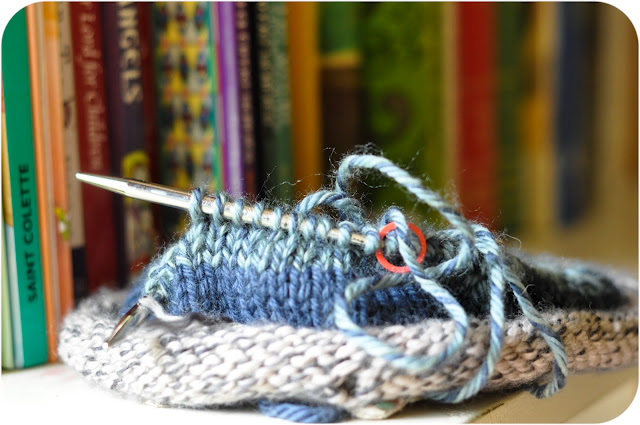 I do believe this will be my first ever wip Wednesday post.  Of course I will have to talk about a few other things as well.  First off, this is Keats’ current project.  I wonder how long it will stay on the needles?  He seems to have lost interest at the moment.  He is knitting in the round for the first time, a hat, and I must say I am incredibly proud of his neat and even stitches (and I hardly notice the little holes here and there from those times he has picked up and started knitting in the wrong direction.) 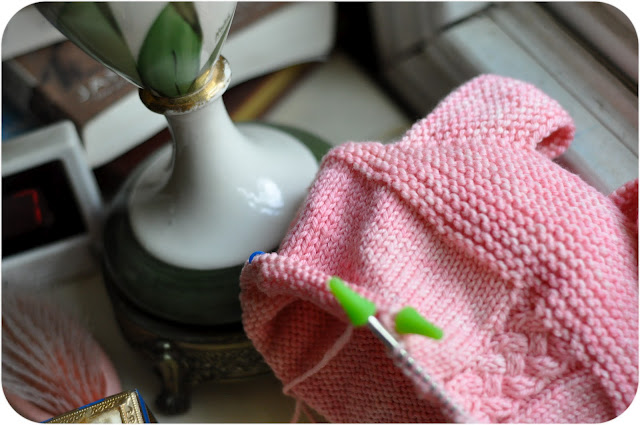 And here is my current knitting project, another Milo vest.  When I finish this one, I have two more to go.  And then there will be matching legwarmers…And speaking of legwarmers, I purchased yarn to knit a new pair for myself as well.  I live in them all winter as I am very cold natured.  The pairs I have slouch terribly (they are alpaca.)  But when does one knit for oneself when there are so many children to knit for?? 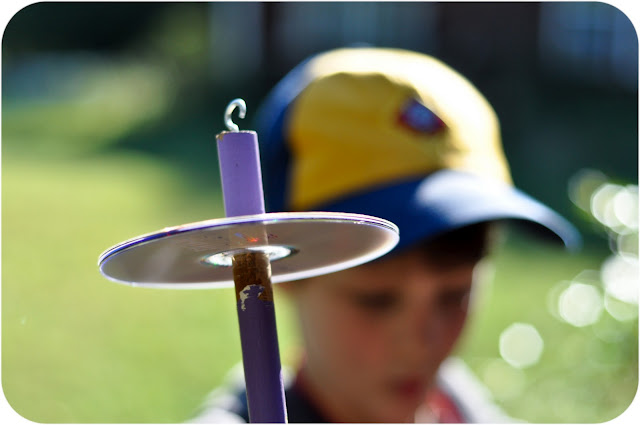 Today Keats made a drop spindle using a dowel from an old broken purple rocking chair, a cd, and a little hook screwed in one end.  Then he watched a youtube video on how to spin using one. (He saw these used at the fiber festival.) 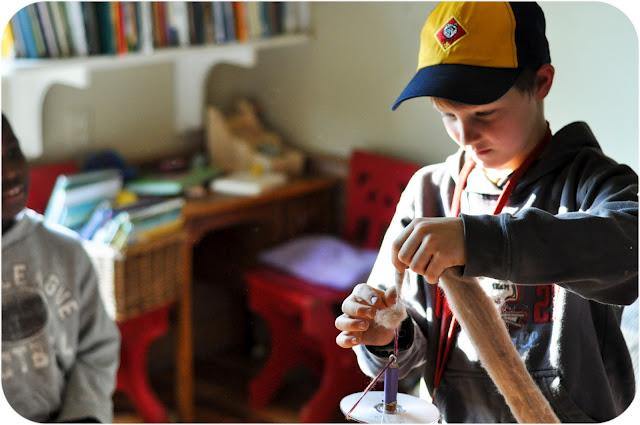 Keats worked at spinning for a little while with poor results.  I wish I could help him, but I’ve not learned to spin yet.  I think he will figure it out on his own though.  He’s good at these things. 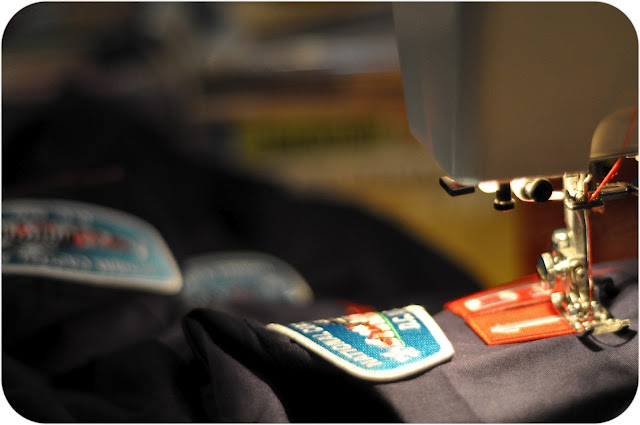 I used my sewing machine yesterday for the first time in months, motivated by the fifteen patches that needed to be sewn on the boys’ new cub scout shirts.  Hopefully I will manage some other sewing soon as well.  Beatrix needs some fall dresses. 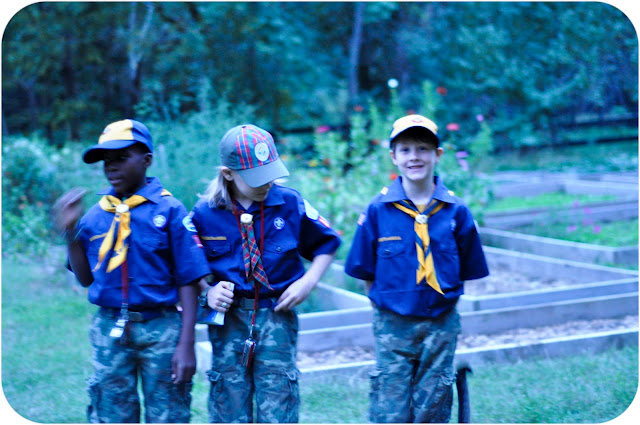 The boys have been in cub scouts for a few weeks now.  Last night was the first time they had uniforms to wear (and of course it is nearly dark when they head to scouts-so no opportunity for a decent even slightly in focus picture.)  I’ve never been struck by cub scout outfits, never considered them particularly cute, until now.  I think my boys are so adorable. 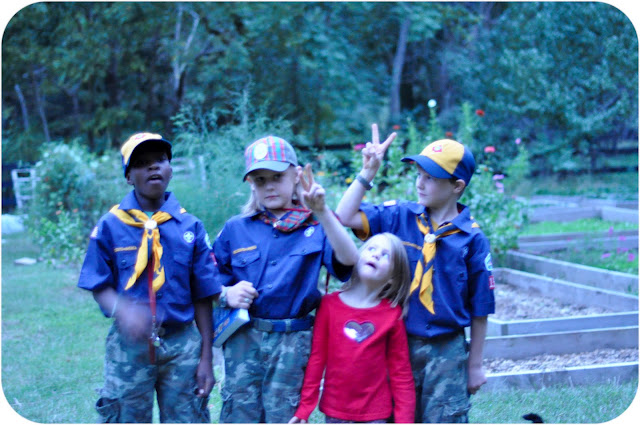 I am loving most aspects of this scout thing, particularly the fact that it is the first outside activity that Seth has been motivated to join.  But, I must say I don’t love the whole selling popcorn thing.  We don’t live in an area that is conducive to door to door sales, nor would I have them do that– very much not my thing.  Besides, how on earth are we supposed to sell something that we wouldn’t eat ourselves??  I guess we will be buying some and then giving it away, not sure to who though. 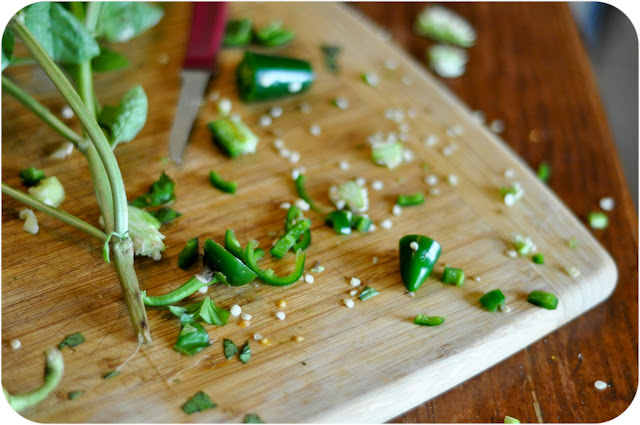 But speaking of what I do let my children do, today they wanted to make “real soup” using the last banana peppers and tomatoes from the garden in addition to a pile of basil, wild onions, and violet leaves, so I said okay, with only slightly raised eyebrows.  They were so excited to create their own soup.  I left them to it, and went about my own work until the screaming started.  One of the boys (who likes spicy food) decided that they should have jalapenos in their soup and took Larkspur outside to pick some, unbeknownst to me.  Keats did the chopping, and evidently Larkspur touched the chopped jalapenos and then rubbed her mouth and nose.  Keats did the same but handled the burn much better than Larkspur did.  The ensuing scene was awful.  She screamed while I googled remedies and then rubbed a procession of rubbing alcohol (very bad choice,) baking soda paste, milk, and finally shea butter on her face.  The shea butter seamed to help and the screaming stopped.  Larkspur told me quite sternly that I should not have let them make soup.  They didn’t have jalapenos in their ingredient pile when I consented!  Truly I felt terrible, but I do believe a lesson was learned by all.
p.s.  While I have a very healthy pregnancy track record and typically don’t begin visiting my midwives until the second trimester, I went in for an ultrasound today because in addition to some worrisome signs, my nausea suddenly ceased a few days ago-and I am only a little more than halfway through my first trimester.  With Larkspur and Beatrix I was sick all day every day well into the second trimester, if not beyond. Thankfully, everything is fine, and our baby looks good, but I am wondering why I don’t feel so sick anymore (I know-why would I question this?)  I did start taking a B Complex the day before I started feeling better, but could it be that easy?  It’s been awhile, but I don’t think I was nearly as sick with my boys as I was my girls.  Anybody else experience that?  I have to wonder what would be different about carrying a boy vs. a girl that would cause lesser or greater nausea, but I am now wondering if I might be pregnant with a baby boy this time around…
Of course all could change tomorrow and I will be feeling awful again.  I hope not!