Because some of you have asked for the nitty gritty: 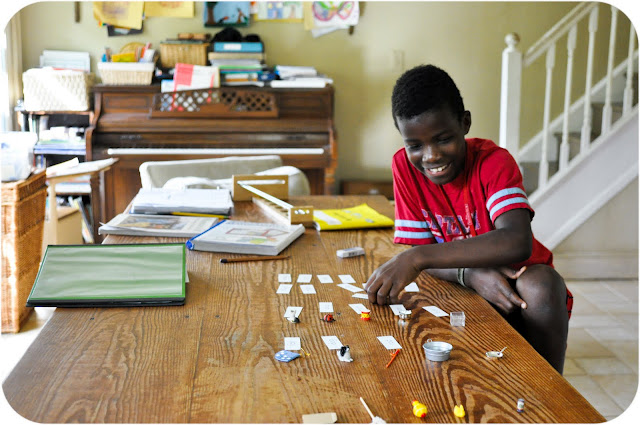 Gabriel is my first grader.  We use the first grade label pretty loosely though.  Academically he is between a kindergarten and first grade level I would say, but he has the maturity of an older child.  We will never know how old Gabe really is.  He has been bone scanned but those aren’t perfectly accurate.  He has all of his adult teeth and is getting ready to pass our oldest son Seth, who is nearly ten, in height.  His feet have grown five sizes in a year and a half.  The made up birthday on his Liberian birth certificate tells us he is seven years old (yeah right!)  We chose to celebrate what we called his eight birthday earlier this summer, but we suspect that he could be as much as a few years older than that even.  I am telling you all of this because for me, homeschooling Gabe has truly been a lesson in letting go, and I think that has helped me regarding all my children.  I have had to let go of expectations of advancement associated with age.  From what I know, adopted children often lag academically for a number of reasons, all of which could be true of Gabe.  Longterm malnutrition, an early childhood environment that lacked the stimulation that children in the U.S. typically receive, and psychological trauma are just a few factors that we have to consider.  In addition, despite the fact that Gabe joined our family speaking Liberian English, even Liberian English wasn’t his first language, and there are many words in our language that he still doesn’t know or understand.
Our first goal with Gabriel was attachment and to teach him how to be part of our family, but I have been also been working on the three R’s: reading, writing, and arithmetic for about a year and a half now (well for us it is really the four R’s because religion is in there too!)  I am only just beginning to see some real progress.  As a homeschooling mom there is something frightening about having a child that doesn’t seem to be learning even after the same lessons have been taught over and over.   But I have learned to remind myself that is doesn’t much matter if Gabe finishes high school at eighteen or twenty-five.  We’ll get there.  If it takes him three years to learn to read, that’s okay!  I continue to meet him where he is at, without ever showing my personal fears or frustrations with his progress (or lack thereof.)  He is growing in much more important areas such as learning to behave like a child who is loved and who trusts his parents.
So now that I have written that long aside, I will try to describe to you how I teach kindergarten and first grade.  Some of these lessons are appropriate for even younger children as well. Larkspur, my four year old participates in many of them.
Gabe and Larkspur both learned their letter sounds last year, but I will mention the materials I used for that. I made sandpaper letters using the templates in Teaching Montessori in the Home: Pre-School Years

to teach them, and on the advice of another adoptive parent, we also temporarily kept a television in the house and they watched LeapFrog – Letter Factory

phonics videos which honestly were the best thing ever for teaching those letter sounds! Gabriel also worked through the Get Ready for the Code workbooks.  He knows his consonant sounds well now, and Larkspur and I review with the sandpaper letters. 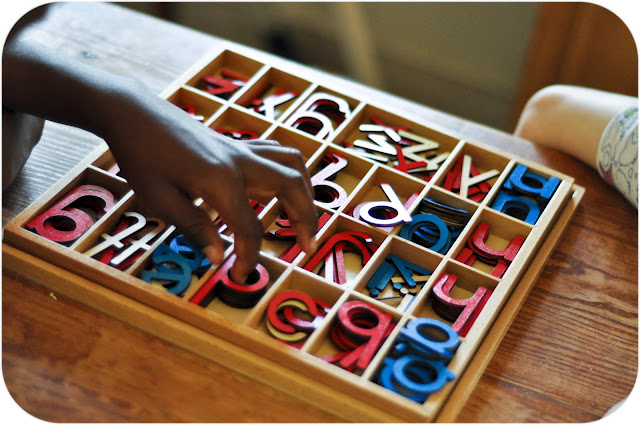 My favorite tool, and worthwhile investment, is definitely our movable alphabet

.  Gabriel is just beginning to be able to read simple three letter words, but he has been building them for some time now with our moveable alphabet. We use this almost every day.  Larkspur typically gets an abbreviated version of the same phonics lessons that Gabe gets each day (she insists!) 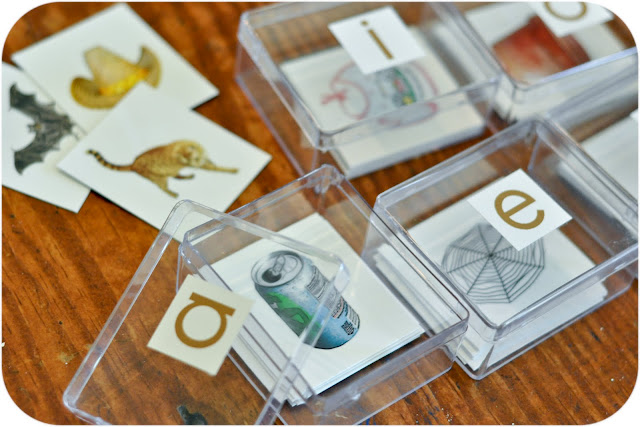 To help Gabe learn to distinguish between the short vowel sounds, I use this middle vowel set, and we are introducing the vowels sounds in this recommended order:  a, o, u, i, e.   Gabe can tell me what sound each vowel makes, no problem.  The difficulty comes in being able to identify the sound he is hearing in a given word. This set is helping us work on that.  It would be pretty simple to assemble a middle vowel set rather than purchasing one if you have the time and a color printer (I have neither!)  Each box is labeled with the vowel sound that corresponds with the objects pictured on small laminated cards.  There are seven or so in each box, all depicting a simple three letter word with a short middle vowel sound.  The first day Gabe had no problem using the moveable alphabet to build all the short a words from the box.  We reinforced that for a day, and then introduced ‘o’.  Things get tricky for him when I give him a combination of both ‘a’ and ‘o’ words.  But he gets better each day. 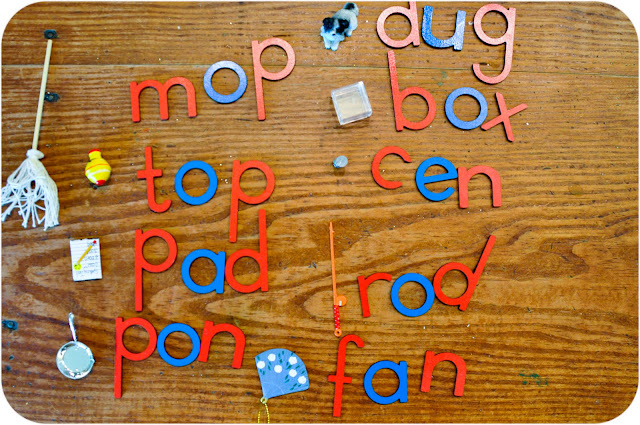 Another purchase I made for this year, (something that could also be assembled on your own, but again, I didn’t have time for that!) was a set of language objects and their corresponding labels.  As I began to really get a grip on the way Gabe learns, I knew that these would help.  Some days I gather a collection of language objects that correspond with the vowel sounds we are working on and Gabe builds the words.  On the day I took the above picture, we were working on ‘a’ and ‘o.’  Despite the fact that no other vowels had been introduced yet, Gabe still chose vowels we weren’t working on.  He has a really hard time with this, mainly I think because Liberians pronounce a lot of things differently than we do. 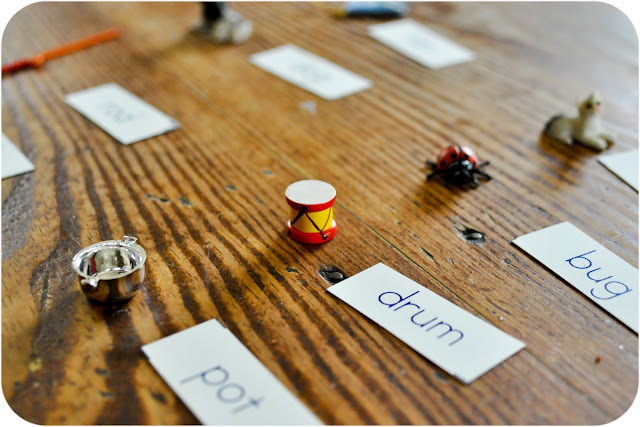 Another fun activity is matching the objects with the card with their name on it.  Gabe is really good at this!  I even throw in a couple of “tricky” words with beginning consonant blends to challenge him, and he does very well.  Sometimes I then remove the objects and have Gabe try to read the words.  He does pretty well, with a bit of help.  Larkspur enjoys this activity too. 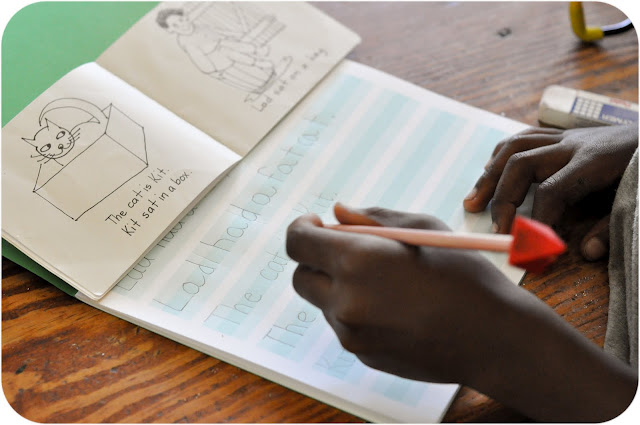 Each school day, Gabriel does a bit of copywork from a level one Bob Book.  I actually write the sentences in his penmanship book and he copies them.  After copying a couple of sentences, he reads them back to me.  We tried just having him read the Bob books last year, but he had a lot of trouble.  He does very well if he first copies the words.

Regarding handwriting, I use Handwriting Without Tears with all of my children at every level.  I have tried other programs but always come back to this.  If you scroll down this web page at a little waldorf shop I love, you will find the (inexpensive) penmanship book pictured above.  I really like these, and the format on the pages matches well with the Handwriting Without Tears workbooks.
In addition to reading and writing, we of course do arithmetic.  I use Righstart Math for all my kids, and have been for years.  Gabriel went through level A last year, and is now in level B.  I could probably write an entire essay about how much I have grown to love this math program, but I won’t!  There is a big emphasis on mental math and truly understanding mathematics rather than regurgitating facts.  I was a bit of a math nerd in school, and can really appreciate the way this program teaches.  You can read lots of reviews here.  I used to think that this program required too much work, but I eventually realized that any good math program is going to require a bit of time and effort from the parent.  As time has passed and I have gotten better at teaching with this program, our lesson times have shortened significantly.
Gabe works on memorizing poetry along with Keats each week (we like Robert Louis Stevenson) and he follows along with our Tree and Forest Study for a bit of science.  We also read to him a lot: everything from board books to chapter books and he loves it all.  Honestly, during the early grades (K-2nd grade) I don’t put much emphasis on science or history because I don’t think it’s necessary.  My kids learn so much naturally from books and conversations with Jonny and I.
For Catechism, we follow the Mother of Divine Grace School’s recommendations for first grade, using St. Joseph Baltimore Catechism.  In addition, right now we are reading through The Jesus Storybook Bible: Every Story Whispers His Name and my kids really love it.

I am also slowly reading to Keats and Gabe from Maria Montessori’s book, The Mass Explained To Children.

This year for the first time I am giving drawing lessons to my kids (and myself-I have no idea how to draw) using Bruce McIntyre’s Drawing Textbook.  We typically only do this once a week, and it is very simple.  Everyone loves this and I get in big trouble if I forget to do it!
I also have ambitious plans to teach about a composer each month, but that hasn’t happened yet.  I would also like to use the Child-size Masterpiece program to teach art appreciation.  I own it in it’s entirety and even have it all organized in little folders.  I just can’t manage to put it into practice!
And finally, if you want to see Gabe’s spreadsheet that I fill in each week with his assignments, you can download it here.  You do have to download it as an excel file to see what it actually looks like because Scribd doesn’t show the font that I use (and it looks kind of crazy and doesn’t appear to fit on the page, but if you download it, it will.)  And then if you do that, you could change it to suit your needs if you want to use something similar for lesson planning.
And while it took me a couple of hours to write this post (good grief!), it only takes about an hour for Gabe to finish with his schoolwork each day.  He spends most of his time playing outside with his brothers and sisters.
I guess that’s about it!