Yesterday’s story:  Rather than using our Wednesday “off” day to put our house in order (as maybe I ought to), lately we have been using it to escape our house.  Jonny and I have a tendency to plan things last minute and to cram too much into a day.  Yesterday was such a very good example of that.  Tuesday night we started discussing where we wanted to go on Wednesday, around 11 p.m.  Keats has been begging to go apple picking for weeks so we needed to do that.  Seth really wanted to drive to Winchester to visit a big cottonwood tree, and the rest of us wanted to go hiking.  Oh, and Seth and I were also set on at least driving through Sperryville, our favorite town and the place where he and I are a little fixated on living one day.  The others in our family are a bit more flexible.
I started by searching for a pick your own farm in the Winchester area.  We figured we would do that first, visit the tree, and then take 81 down towards Shenandoah National Park, and after our hike, head home through Sperryville.  Of course the day we have lots of ambitious plans is also the day that was preceded by a night of no sleep.  We were up late making our plans and printing maps, and then the girls took turns getting up all night.  I realized at some point during the night that I was coming down with the cold that two of our boys have had.  AND, I woke up feeling pregnant-you know that first nauseated day.  But we still had to escape.  So the next morning we packed the cooler and headed out of town. 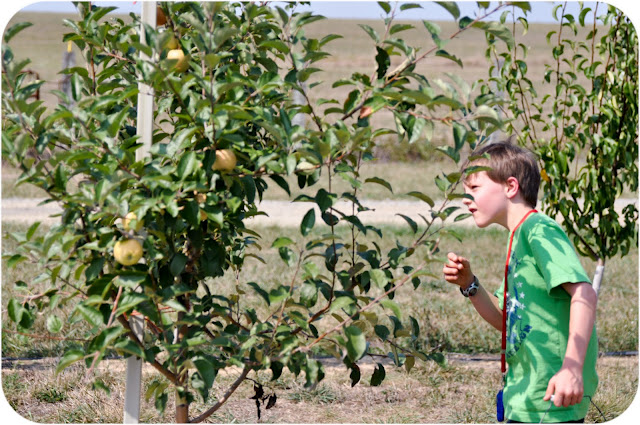 We forgot how long it takes us to get to Winchester.  I think it took twice as long as we expected.  There was a lot of whining.  I rode the whole way feeling really sick and really sleepy, forgetting why in the world we were doing this.  We finally found the apple orchard which had lots of nice characteristics, but wasn’t exactly what we had envisioned.  To make matters worse, temperatures were in the 90s and with the dry weather we have been having, everything looked sort of brown and crunchy.  We were directed to the very back of the farm to pick.  It was a long walk, and when we got to the back, there were very few apples on the very young looking trees back there. 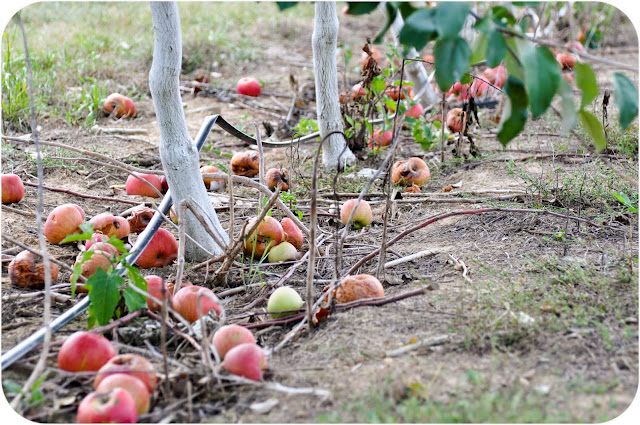 There were a lot of rotting apples on the ground though.  As we headed back to the front of the farm we spotted a section of larger trees covered in apples.  We wondered why we weren’t directed to those! 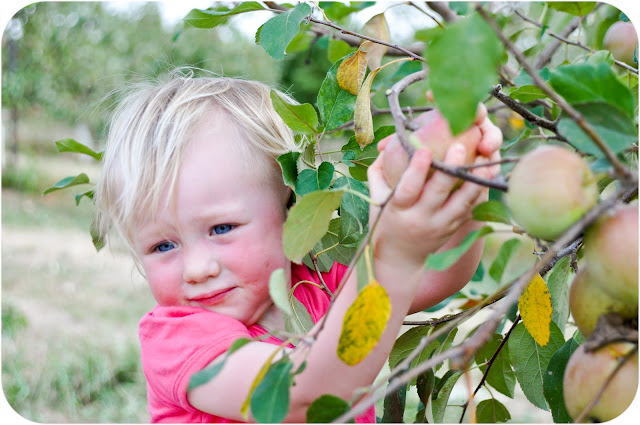 There were some low apples that Beatrix could reach but she was hot and sweaty and quickly lost interest. 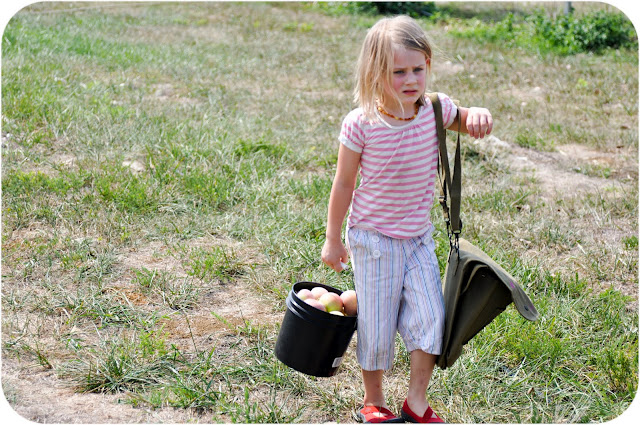 We carried our buckets to the counter, paid, and got out of there.  Next time we want to pick apples, we will stick with Carter’s Mountain in Charlottesville.  But, we are kind of down on the whole apple picking thing now.  We will probably stick to buying local apples at the farm stand a mile down the road, at the same price as pick your own, for the rest of this season.
After leaving the farm we headed to find the cottonwood tree, and got lost in downtown Winchester, before finally finding it.  I was happy to get lost though, and enjoyed seeing all the neat old houses and wondering what it would be like to live in one of them.  After visiting the tree we hit 81 relieved to finally be headed down to the National Park for our hike.  That drive was nicer than the one to Winchester, but sometimes I really wonder what is wrong with us that we think that driving all over the state is a good thing when Beatrix is non stop yelling and whining most of the way.  She has never been a good rider. 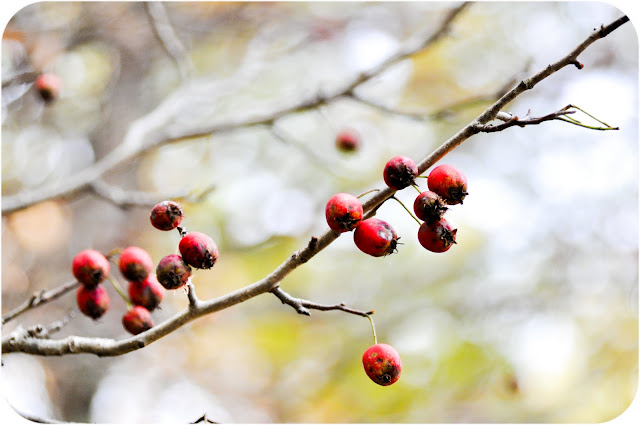 It was around five o’clock when we finally entered the park at the familiar Thornton Gap entrance and headed up skyline drive. At this point I was so tired that it felt a little insane that we were getting ready to go for a hike but there was nothing I would have rather been doing.  The leaves are already beginning to change and the colors were so pretty.  The air smelled so clean and fresh after a recent thunderstorm. 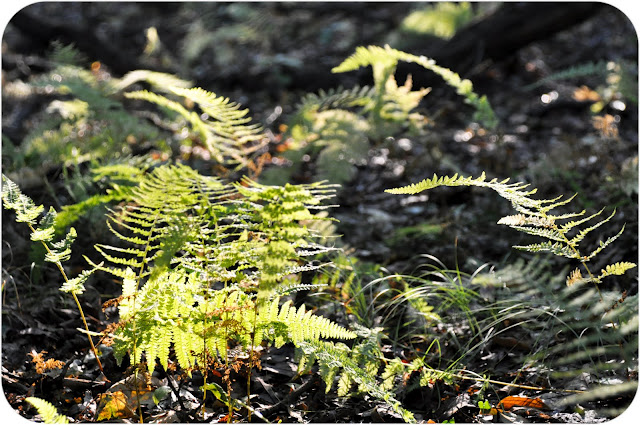 There are two trails to Hawksbill summit: one is shorter and steeper, and the one we took is a bit longer (2.1 miles round trip), but much easier.  It felt really good to be on that trail heading up the mountain.  The whining continued because Larkspur was scared of the rumble of thunder in the distance, but she soon pulled herself together. 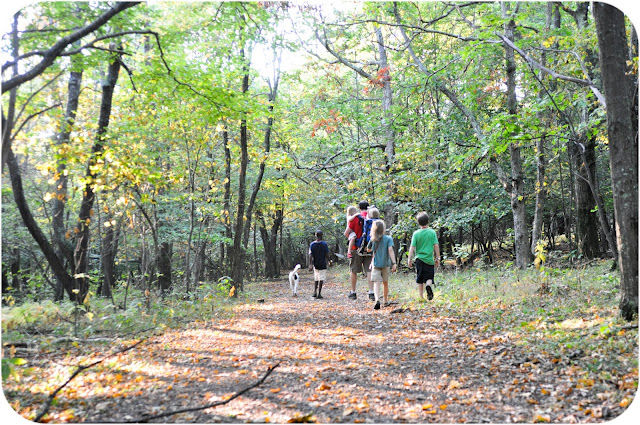 I was grateful that we ended up making this hike so much later than we had originally thought we would because the air was cooler and we had the trail all to ourselves. 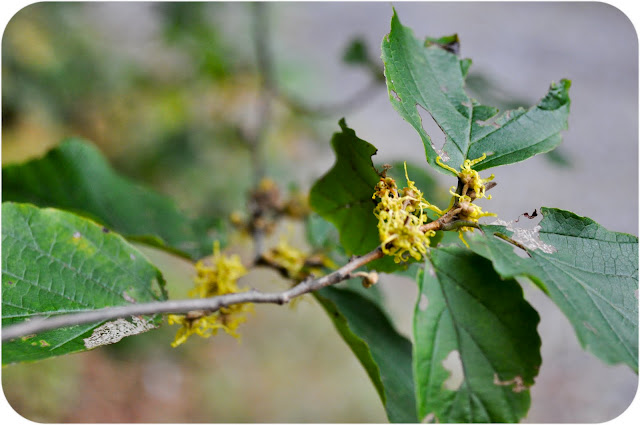 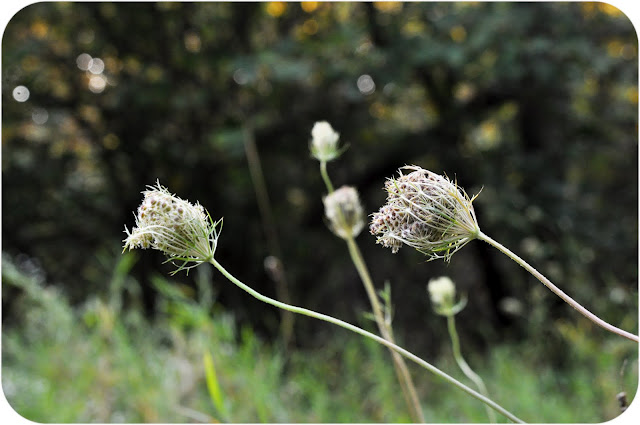 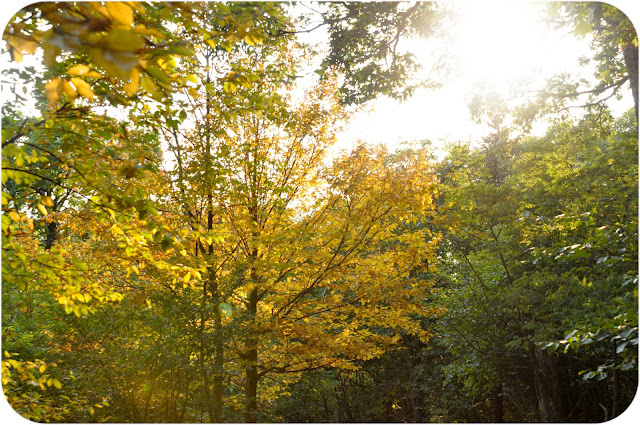 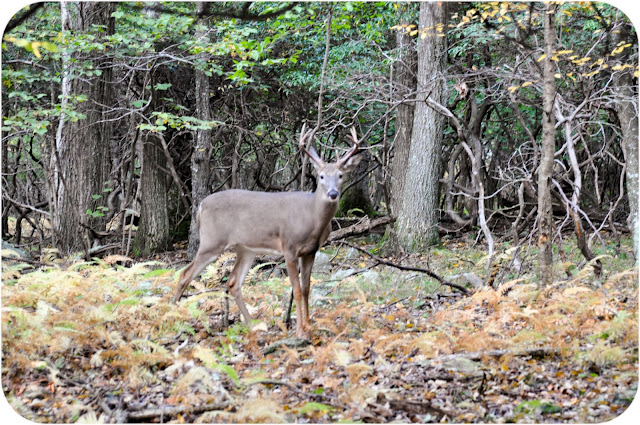 We saw lots of deer, including this buck (Seth just requested that I edit to add that it was an eight point buck 🙂 that for a moment headed straight for us, making us a bit nervous!  He wasn’t the least afraid and we got to see him not only on the way up, but on the way back down as well. 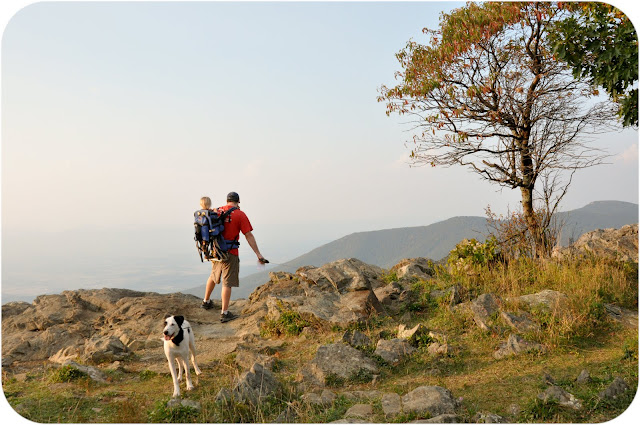 The hike seemed too easy considering the views at the top.  As Jonny walked out to the edge of the rocks, Beatrix started yelling excitedly, “Jump Daddy!  Jump Daddy!”  She is fearless, and reckless, and she terrifies me! 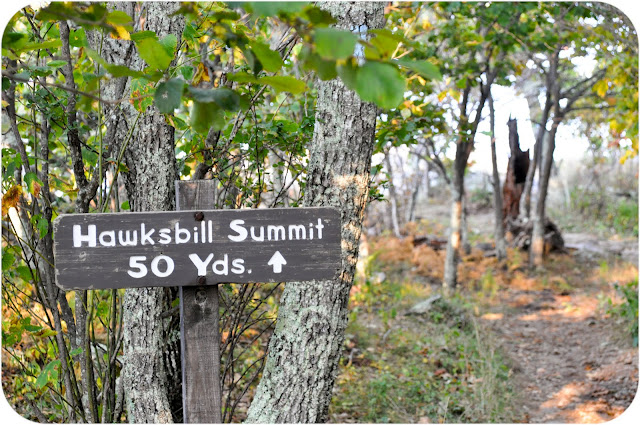 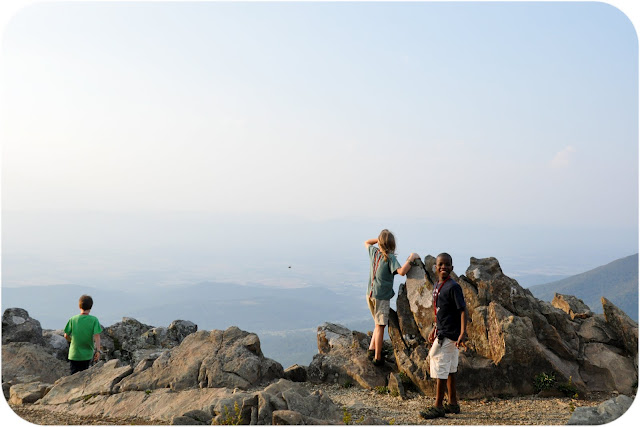 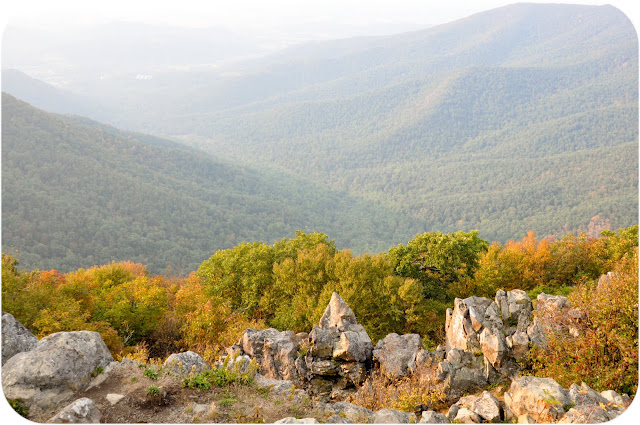 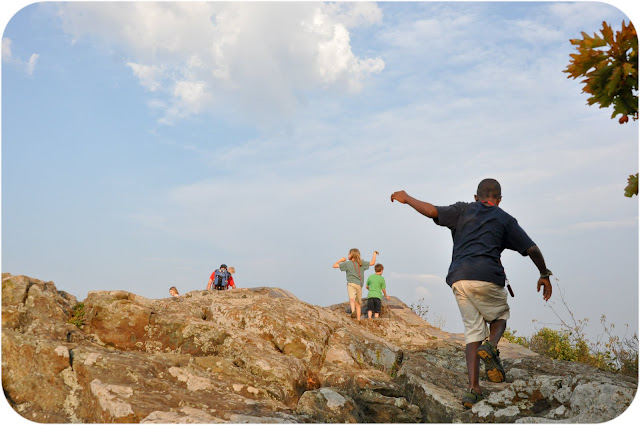 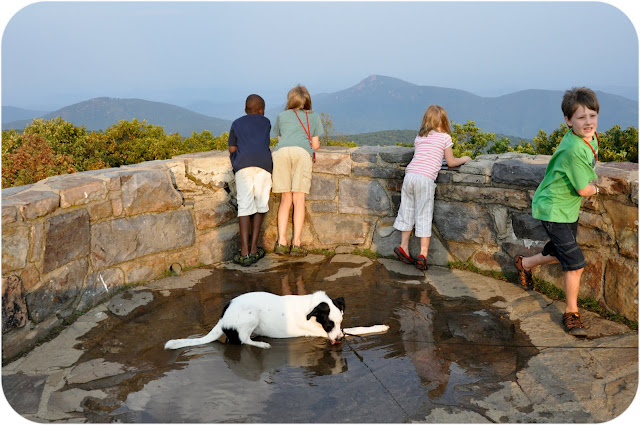 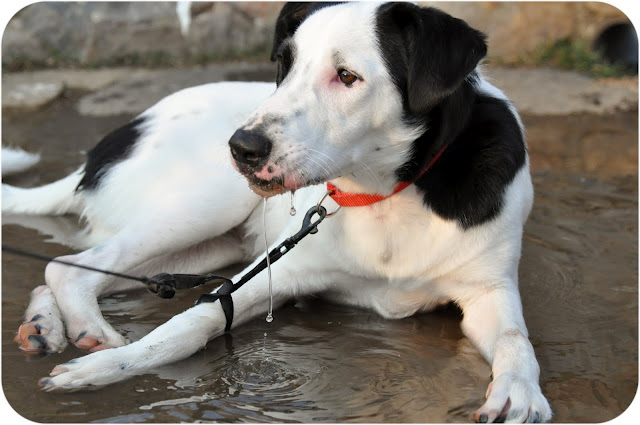 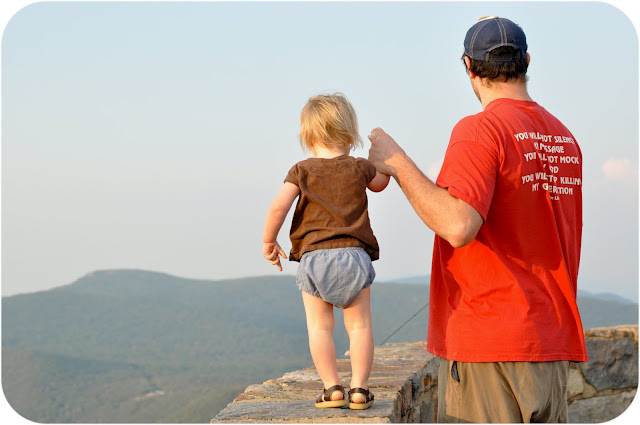 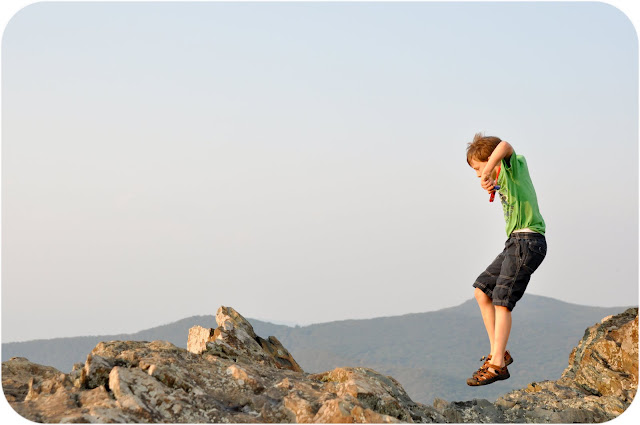 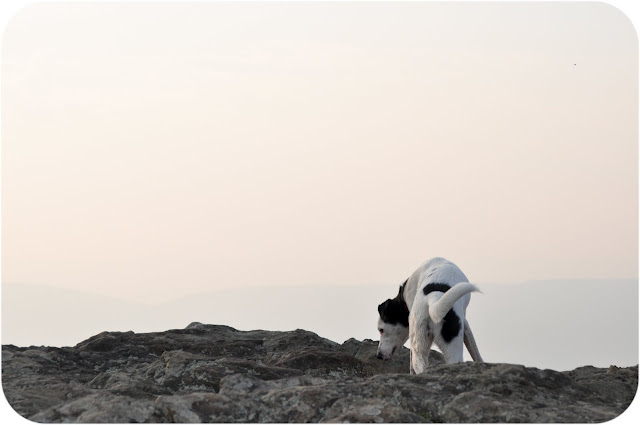 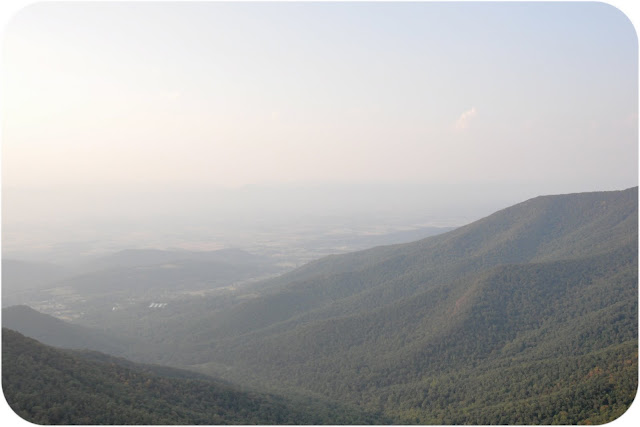 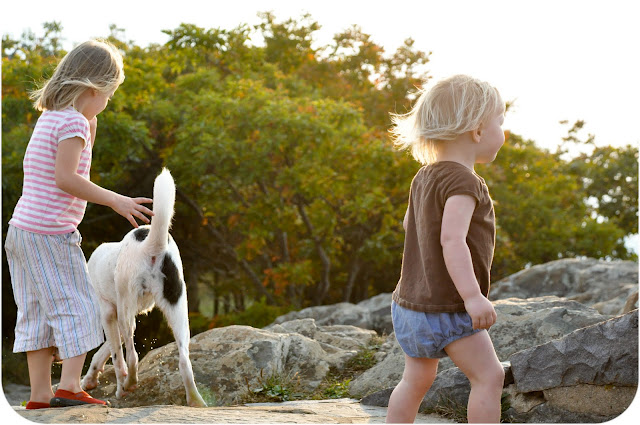 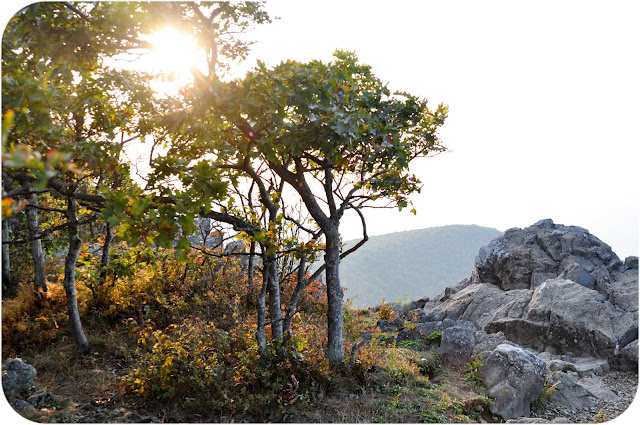 We did make it to Sperryville on our way home, and walked the sidewalk in the dark before having pizza for a late dinner at Rudy’s.  On the way back home, Beatrix finally fell asleep after yelling at me for about fifteen minutes, followed soon after by Larkspur.  The boys listened to Your Story Hour, and Jonny and I talked about baby names.  The day all began to make sense at that point.  But next time, I think we will be more reasonable about how much we try to fit into one of our outings.