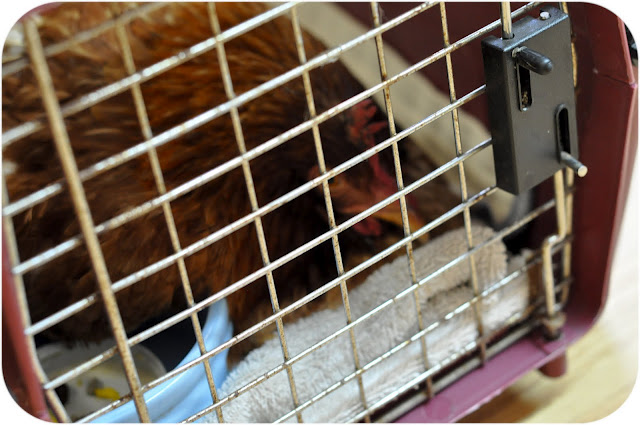 I never meant to put so much energy and love into a chicken, but I guess I will always be the sort of animal lover who can’t differentiate between the “farm animals” and the pets.  Trouble remained alert these past two weeks even as she slowly lost all use of her legs.  I reached a point where I couldn’t just let Jonny take her out back and end her life, even though I began to realize there was little hope of her ever walking again.  She hardly ate a thing on Saturday, and despite the gourmet chicken meals I prepared for her (I tried everything!) she wouldn’t eat on Sunday.  I tried putting her outside in a metal crate in the shade and then putting bowls of food on the outside for the other chickens to eat hoping she would be motivated to eat her own food while watching them, but it didn’t work.  Sunday evening we gave Trouble a bath (necessary every few days because she got pretty messy when she used the bathroom) and she just floated in the water, not fighting a bit, not moving her legs.  After her bath we discovered that she had develped a sore on her underside and reality really started to sink in.  I put ointment on the sore and wrapped Trouble in a towel and placed her on a heating pad.  She went to sleep and was so drowsy that she didn’t even wake when we were making noise around her.  I thought she would die in the night, but she didn’t.  This morning she was very alert.

I began calling vets but as I called the ones I had been told would see chickens they each explained that they only saw pet birds, not chickens.  Finally I found a vet who does see chickens, but she only does house calls and therefore she is pretty expensive.  It would have cost close to two hundred dollars for her to come out and euthanize Trouble, something that Jonny could do for free just as quickly.  But I couldn’t bear the thought of that.  I went into the bathroom and sat in the floor covering my face and sobbing.  It wasn’t so much about Trouble I don’t think, considering the fact that she was never really a pet, and didn’t have any sort of affection for me, but that I wanted so much to save her.  I don’t know why I got so emotionally involved, but it is typical of me in most anything I do, and sometimes I really frustrate myself!  I tried so hard to help Trouble and I didn’t want to fail.  I wanted her to get up and walk and join the flock again.  I wanted some sort of chicken miracle for her.

Then I remembered that there was one more vet I could try, a vet in Orange, VA.  I called and sure enough she said we could bring Trouble in.  Suddenly, an hour long drive and a sixty dollar office visit sounded reasonable.  I was crying, so Jonny consented.  He was actually very nice about it.  Well he’s nice about everything really.  And he’s used to how silly I can be over animals.  After hanging up the phone I was able to get Trouble to drink some water and peck at a little food and I started to get optimistic.  I am big on hope.

So we scrapped all of our homeschooling plans (not to mention Jonny’s work plans) for the day and drove the hour to Orange County.

The vet there was absolutely wonderful, and she actually keeps chickens herself.  But after examining her, she believed that Trouble had suffered trauma to her back and that the gradual paralysis in her legs was the result.  She didn’t believe that she would ever walk again, and I knew in my heart that she was right.  I swear she was so sweet she was ready to cry with me over poor Trouble.  Knowing that it was the best choice for her, through tears I made the decision to have Trouble euthanized.

So, no happy ending to this story, but that’s okay.  The kids were completely fine.  It’s funny that over the two weeks we kept Trouble indoors they sort of adjusted to the fact that she might die, while I got way too attached refusing to believe that she would.  While I felt super dramatic this morning and even told Jonny that I wanted to give away the whole flock because I just couldn’t handle all the aspects of keeping chickens that I didn’t prepare for (including all the poop!) but I am feeling better now. 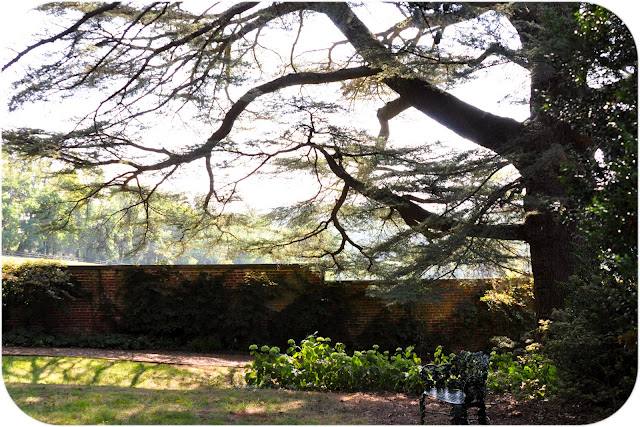 Since we were already in Orange, we decided to visit James Madison’s Montpelier, which turned out to be a lot of fun. 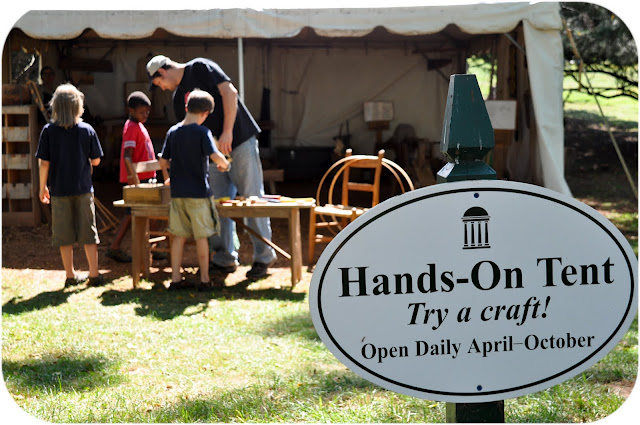 After discovering the Hands-On Tent, we decided not to even take the guided tour of the house.  We can always go back because we bought a year long membership.  We have memberships everywhere we go because when you have a big family it’s cheaper that way. 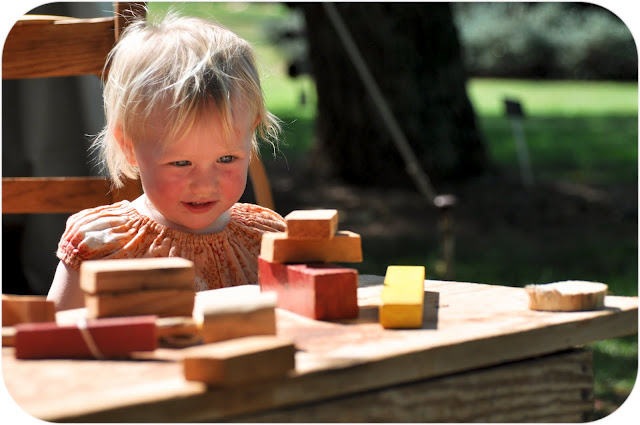 There was something for every child here. 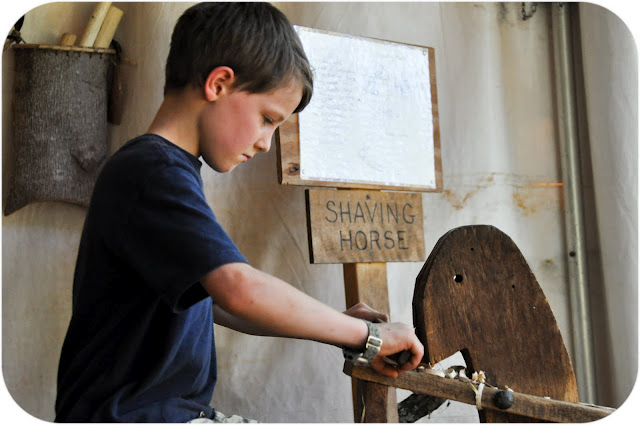 The boys had a great time and could have spent hours with all the old woodworking tools. 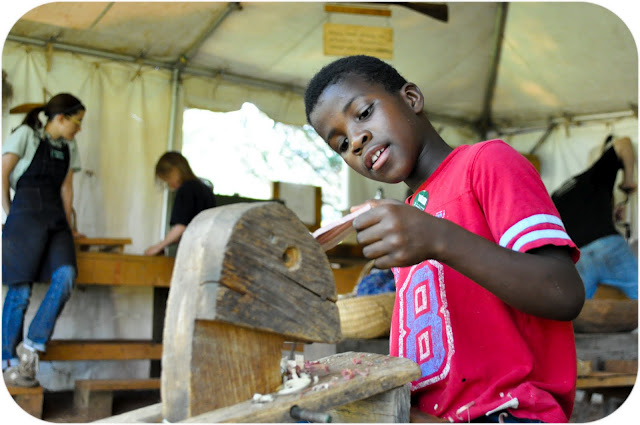 Now I want to start a collection of our own so that they can enjoy old fashioned woodworking at home. 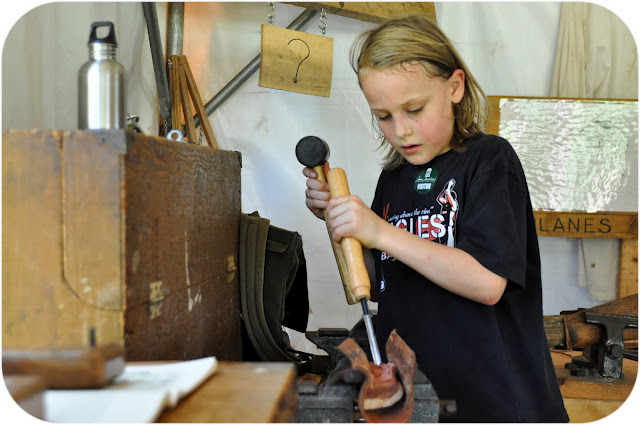 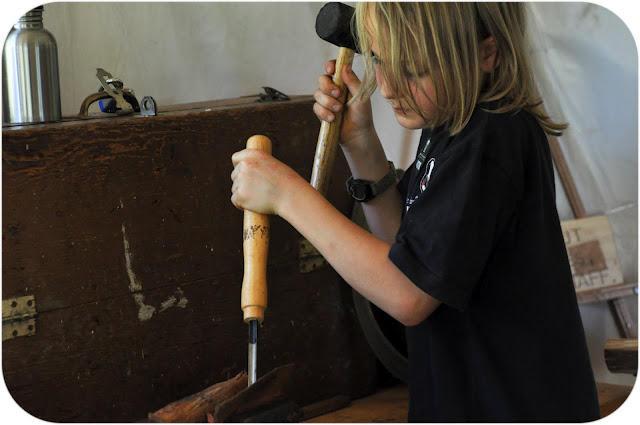 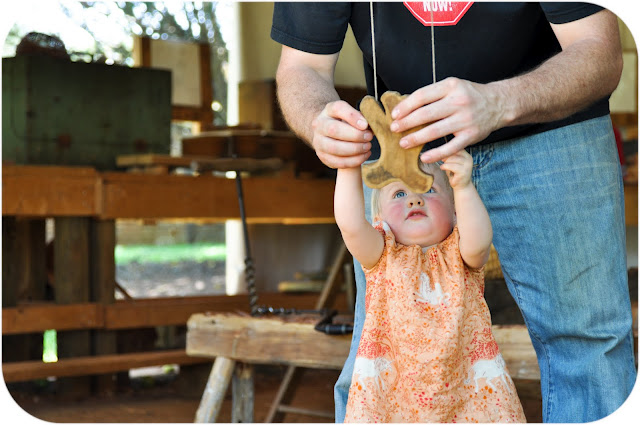 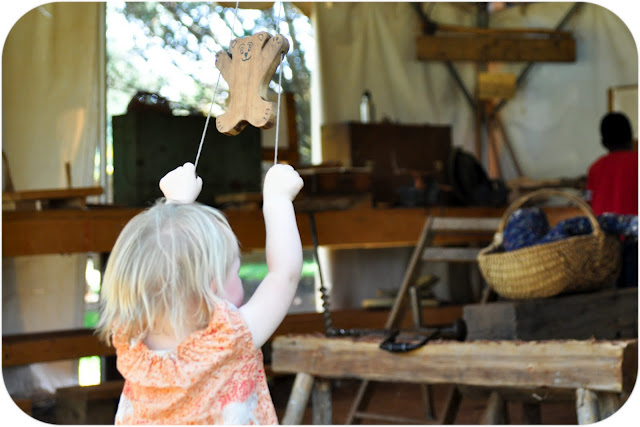 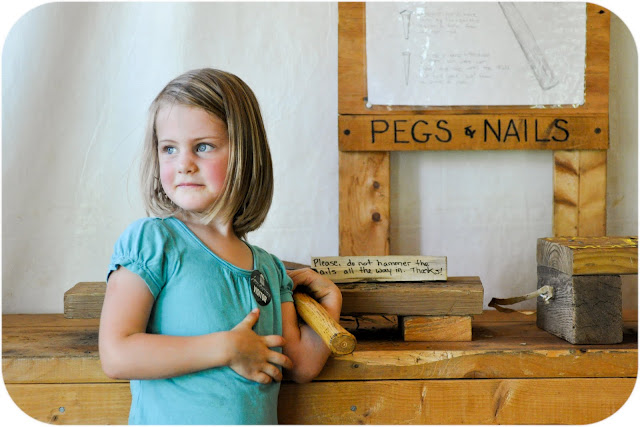 She won’t smile for me, but when a couple of strangers started snapping photos inside the tent, Larkspur started smiling for them! 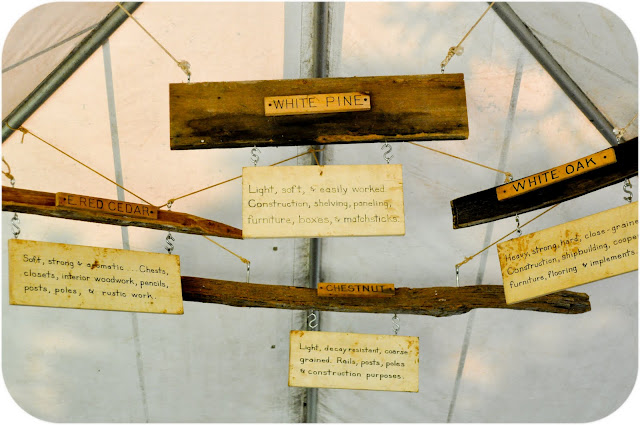 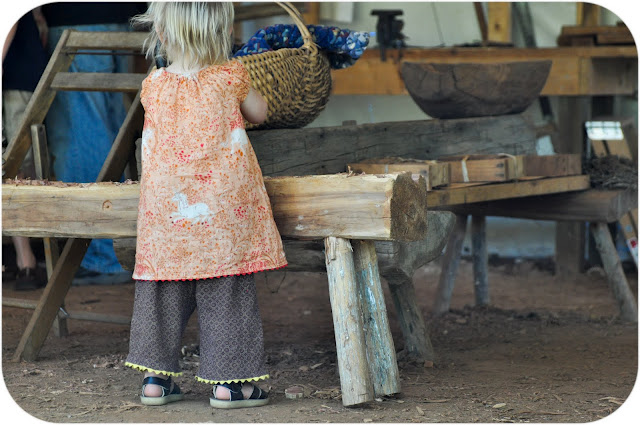 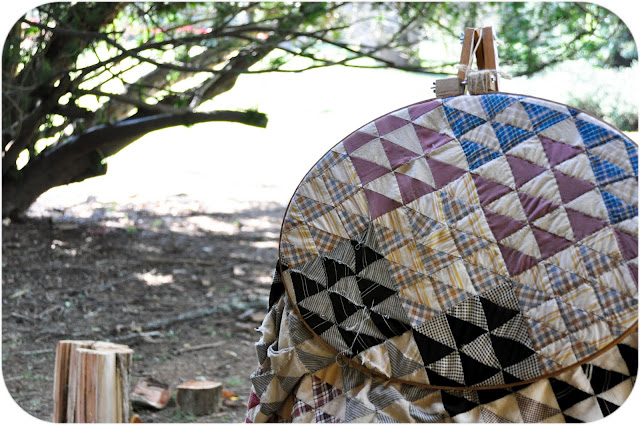 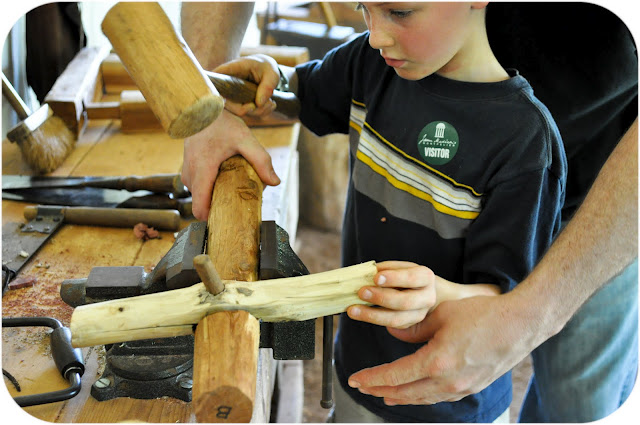 Jonny worked with the boys to make a cross for Trouble’s grave without using any power tools and fastening it together with a wooden peg. 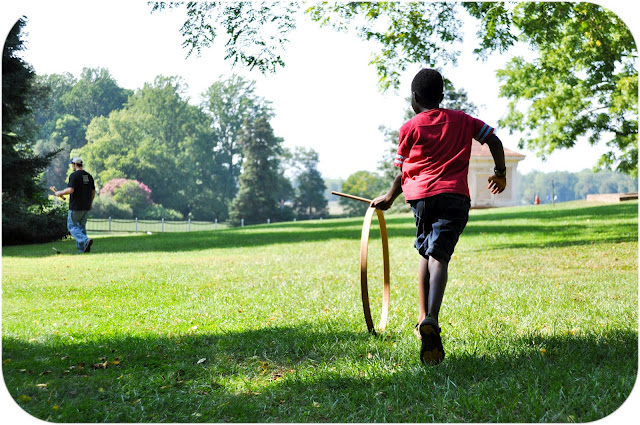 I have wanted a toy like this for Gabriel.  Children play with old wheels in Liberia, pushing them along with sticks. 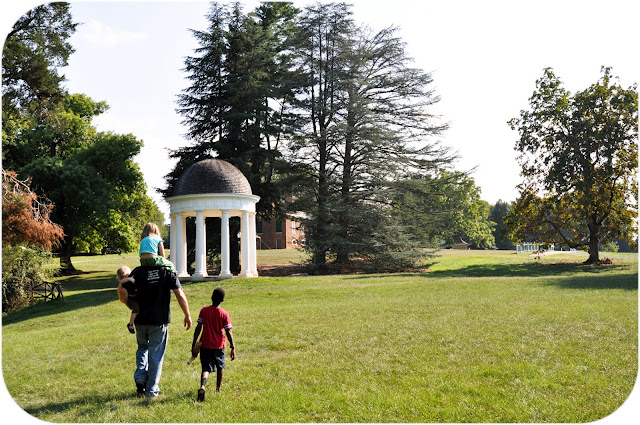 Montpelier is a really beautiful place, and I am sure we will go back.  There happens to be a tree there from our Remarkable Trees of Virginia book as well, but I will save that for later.